How likely are you to encounter a tiger in Russia? 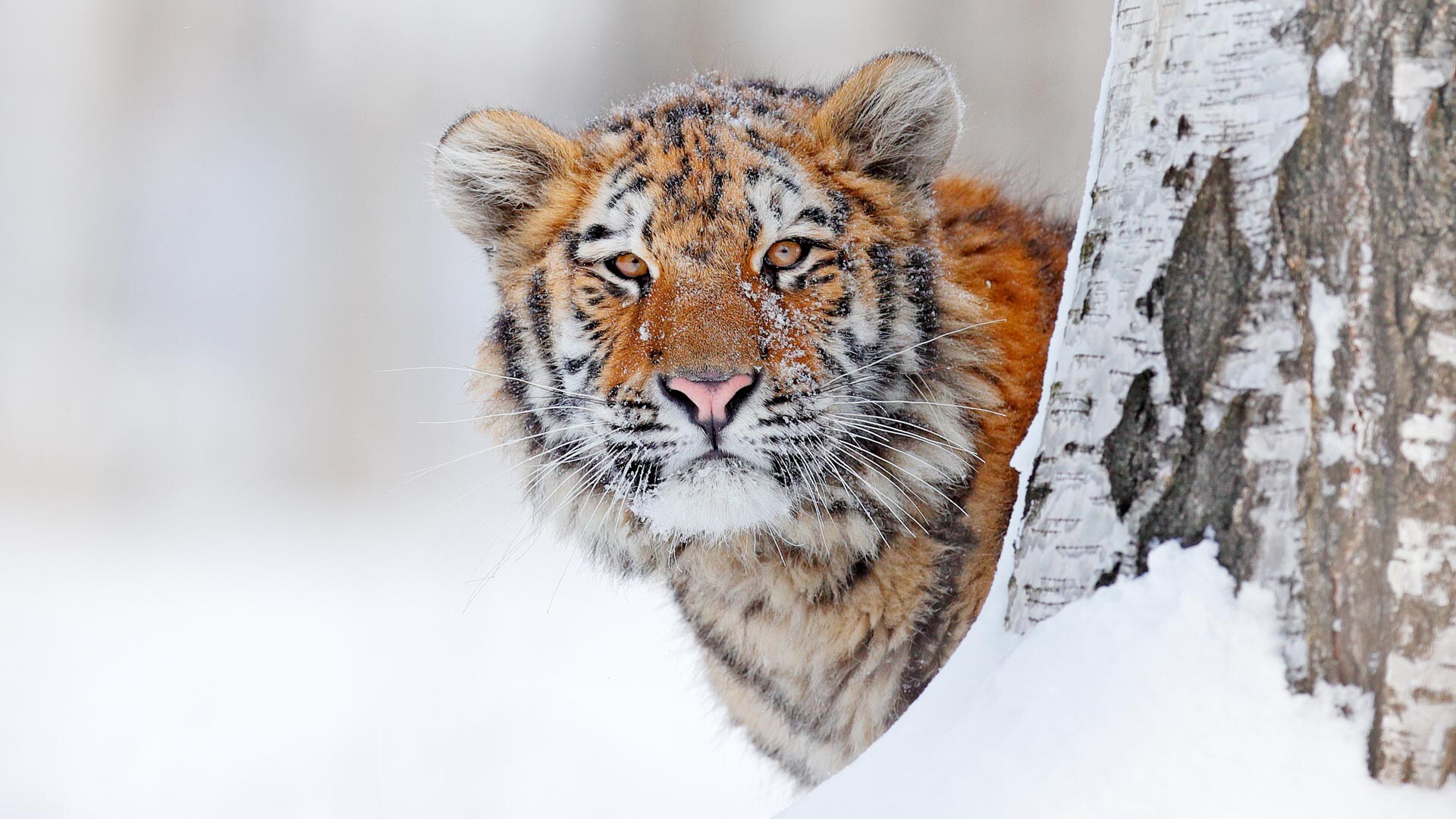 Getty Images
You didn’t think Russia only had bears walking the streets, did you? Well, in the Far East, you’ll find the Amur tiger - the most northern, as well as the rarest in the world.

The first picture that comes to mind when thinking of tigers is the jungle, probably in some hot Asian country. But the striped big cat actually feels right at home in the deep snow as well. Just look at the Amur Tiger - which, aside from being the rarest and most northern of the species is also the largest.

Where do they live?

“Go take a walk, kitty. Let us get our fishing rods, we’re fishing”: that video with the Primorye inhabitants that encountered a young tiger went viral in Russia. The wild animal came up really close and just stared for a while, before grabbing the bucket with the day’s catch in its teeth, and calmly stealing it. Watch till the end!

There are a great many videos of this sort online, but few of them don’t include the authors cursing in amazement. This is understandable, given the animal’s sheer size, which strikes fear into the hearts of even the most fearless of people. Just imagine a two-meter long (without the tail - which is an additional meter) striped predator weighing several hundredweights approaching you! 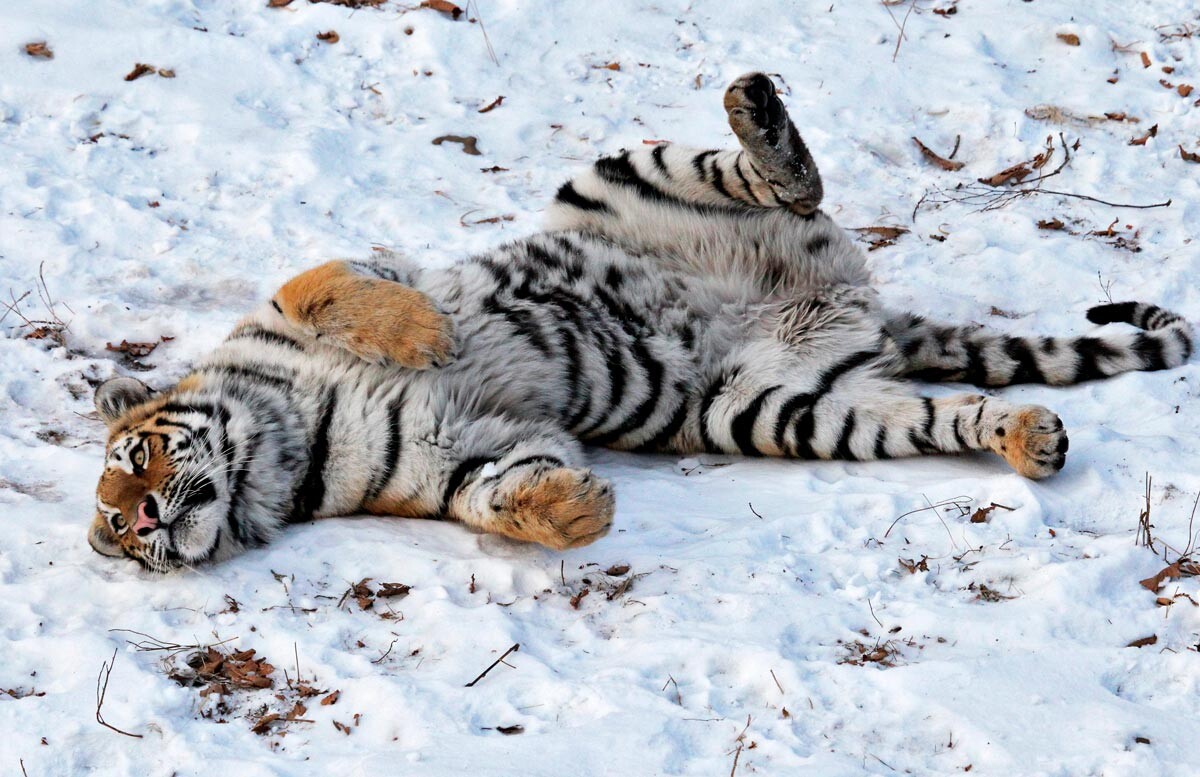 Amur tigers (also known as Ussurian - or Siberian - tigers) live in Russia’s east, in the dense wilderness of Khabarovsk, Primorsky and Amur Regions. Today, they number a little more than 500 individuals on Russian territory, with another several dozen have been spotted in China. This species is considered to be critically endangered, and is therefore under government protection.

The Siberian wild cat is different from its southern counterparts not only because of its humongous size, but also its resistance to the cold. Come winter, these tigers grow a thick coat with a five-centimeter layer of fat on their bellies. 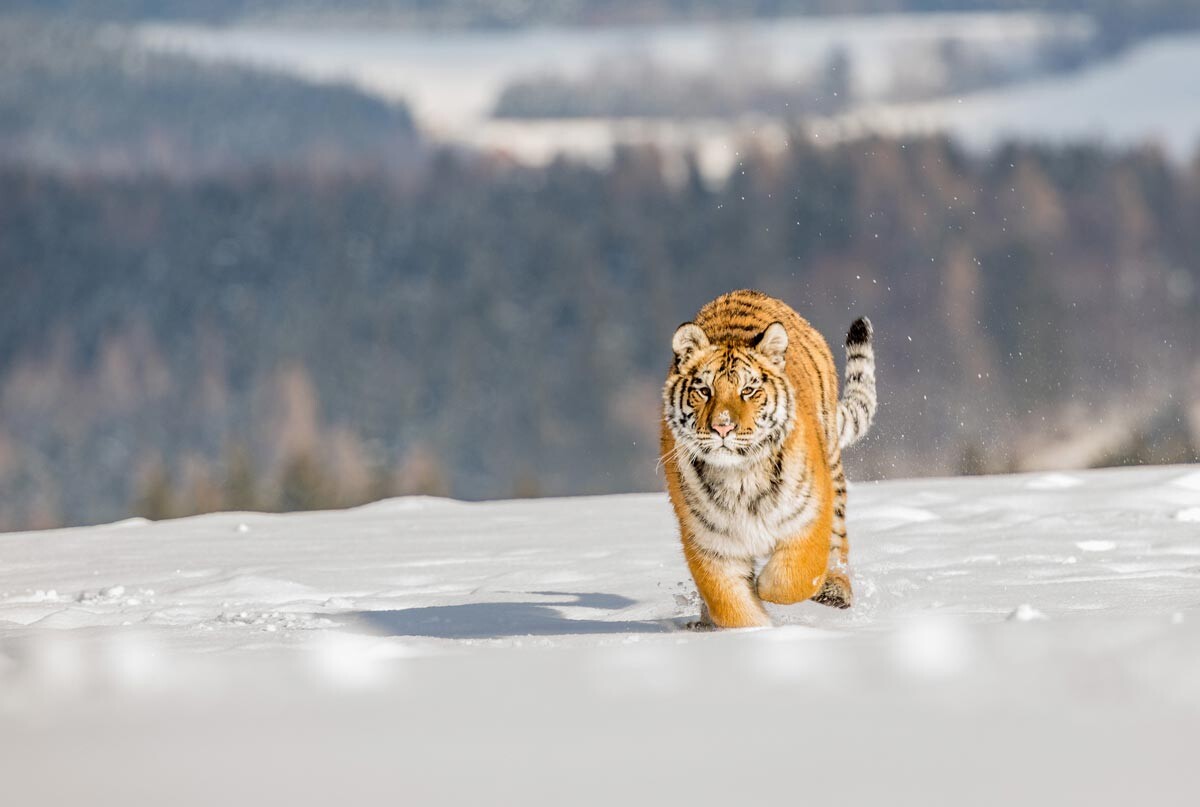 Try to call me fat.

Another feature are the large white spots on the ears of the females. When they give birth to offspring, the mother puts her ears up in such a way that the little cubs don’t get lost at night.

Each individual has its own roaming ground - quite large as well, around 500-600 square kilometers. And, according to scientists, the Amur Tiger never strays outside of its claimed territory, if there’s enough food there.

Do tigers go out of their way to encounter people? 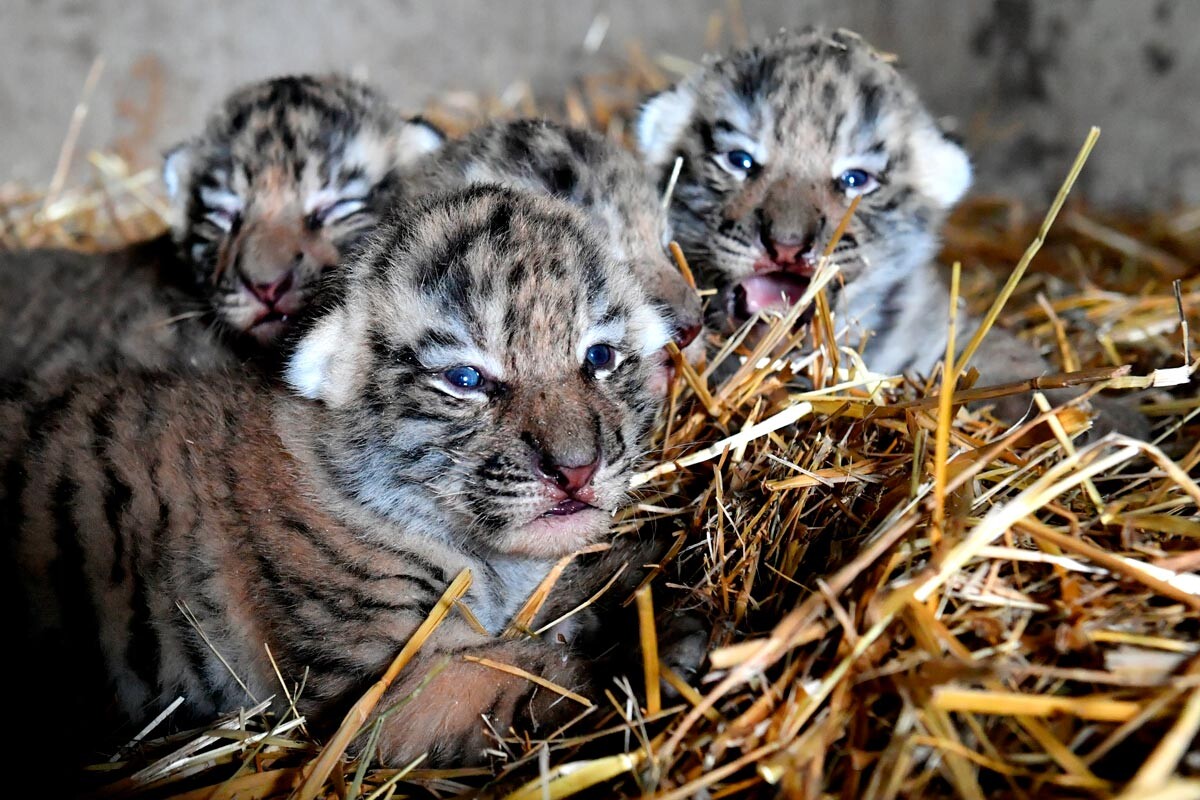 Wild animals on the whole don’t like the noise of the roads and loud sounds in general, so try to keep away from populated areas; however, they do periodically pop up in villages. Inhabitants of small settlements see tiger tracks regularly by their homes, if they’re located not far from the taiga. Tigers are of no doubt attracted by the promise of an easy catch - and we don’t mean people, or lambs and sheep, or even dogs.

The following video shows drivers encountering a tiger on the Vladivostok-Ussuriysk highway. There’s a railroad situated nearby. But the tiger decided to go for a walk anyway. “Stop the car. Ah! Kitty! Just look at that beauty!”

“It’s easy to sit home and marvel at the “pretty kitty”. But when that kitty lies patiently under some tractor in the center of a village - it’s definitely not a ‘cool’ or ‘pretty’ sight!”, Alyona from Khabarovsk Territory writes. “There’s plenty of roe deer, but they’re hard to catch. The tiger’s lost all semblance of decency, to the point where he came onto the road at 8 PM to mount a watch.”

In Khabarovsk Region in 2021, specialists received more than 280 messages of tiger sightings in residential areas, of which half have been confirmed. Primorsky Territory accounts for about 100 of them. Every time one takes place, animal watch operatives are called in. 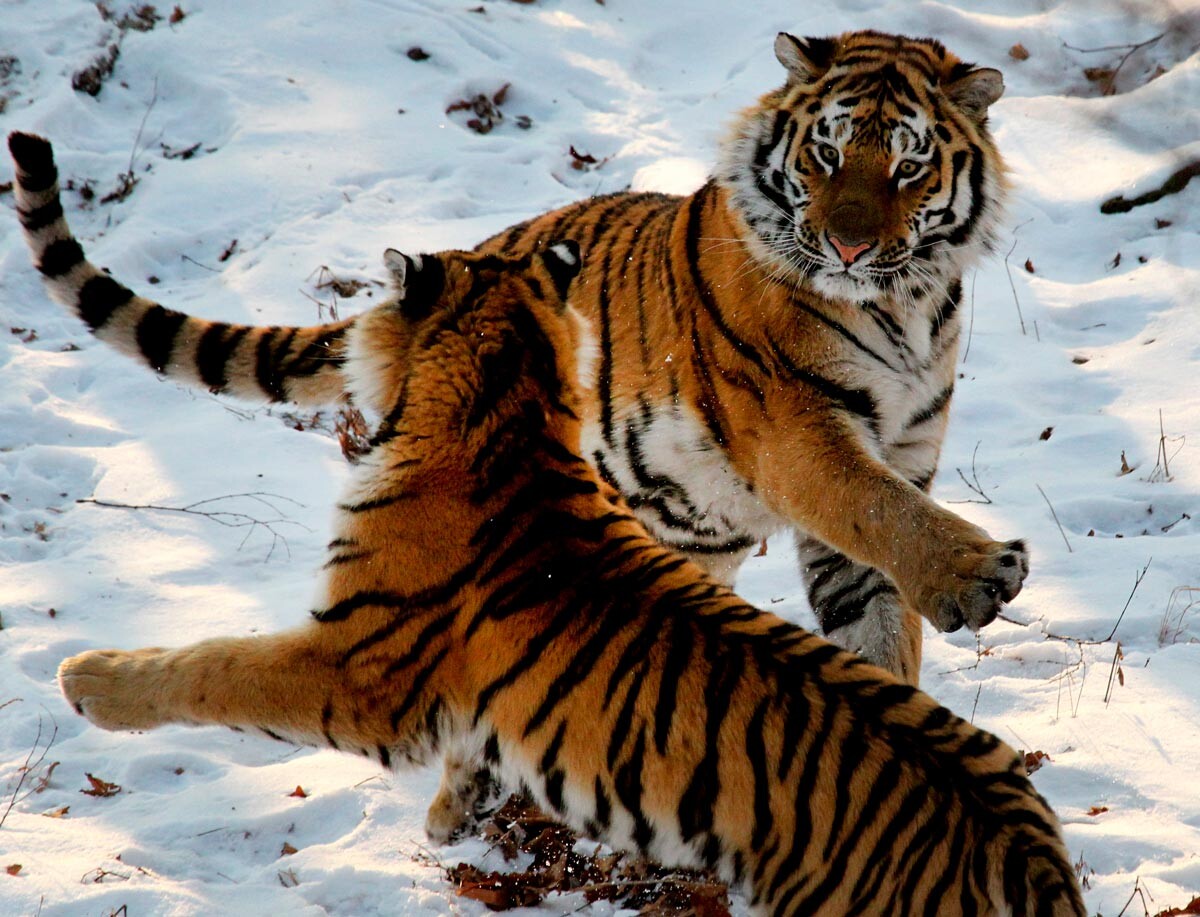 “Sometimes it happens that people see a track near the village, and immediately make the call. And it turns out that the tiger was simply walking by,” Primorsky Territory animal conservation director Alexey Surovy says. According to him, tigers often attack pets, as well as dogs that stray too far into the woods, which they take to be wolves - their natural enemies. “Human attacks are extremely rare,” he adds.

The “Amurskiy Tigr” center, which regularly publishes videos of tiger encounters, reminds viewers that encountering the big cat in the wild requires that one keep calm and avoid falling into a panic. They are very good at sensing fear. Here’s a masterclass in how Taiga people handle such situations: “Where do you think you’re going, fella? Why don’t you take a hike!”