What do Russians drive when it's -50°C outside? 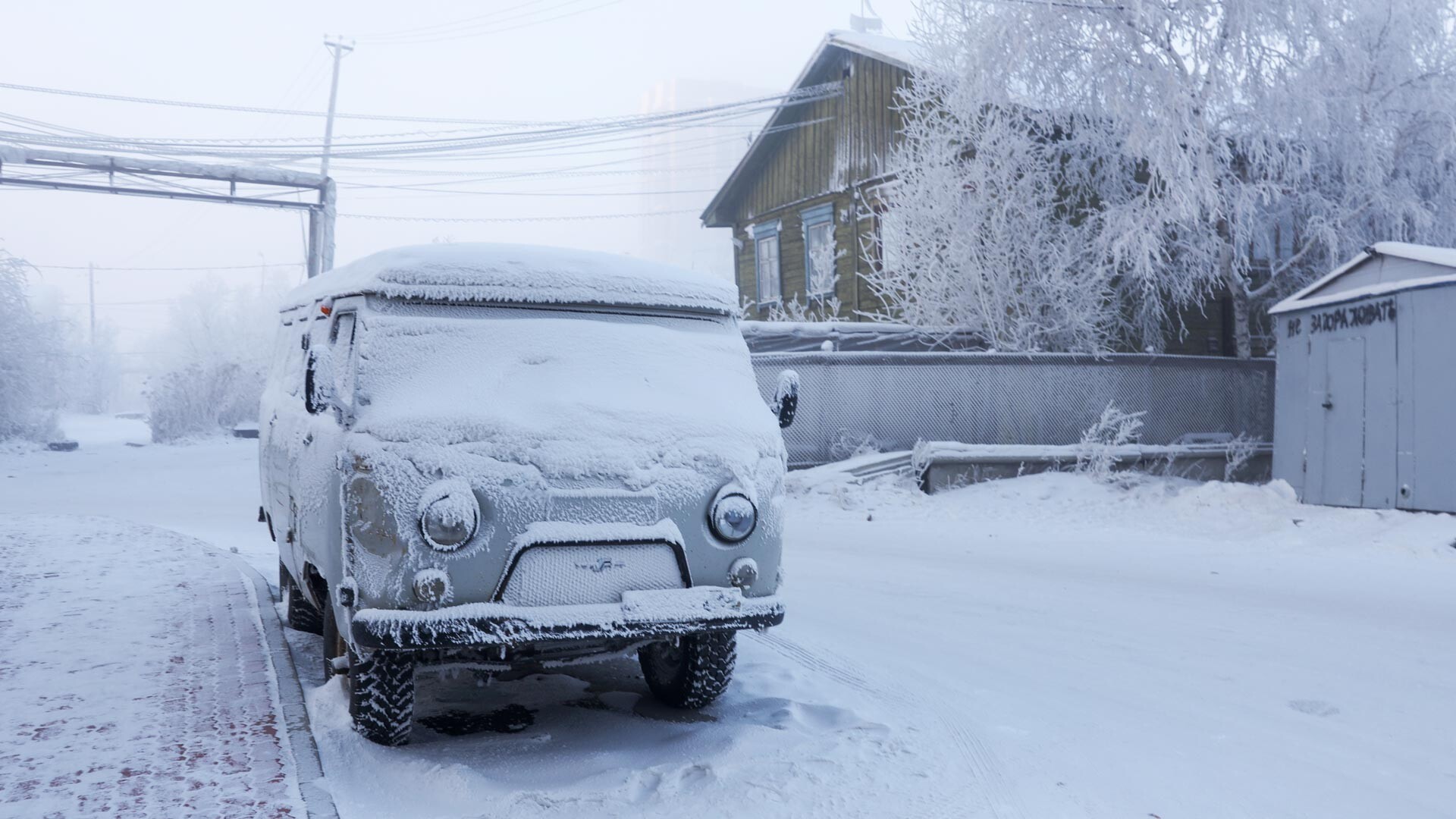 Yakutsk. The temperature is about minus 48°C.

Vadim Skryabin/TASS
Driving a car in Yakutia, Taymyr or Chukotka is not easy, but ingenious locals in these regions have managed to adapt their vehicles to even the most severe weather.

We have already told you about how residents of Yakutsk, Norilsk and Vorkuta prepare their cars for snowy and cold winters. But what kind of cars do you see most often in Russian regions where the weather is extremely cold? It might come as a surprise, but the locals' favorites are not huge SUVs or pickup trucks.

Japanese classics for Siberia and the Far East 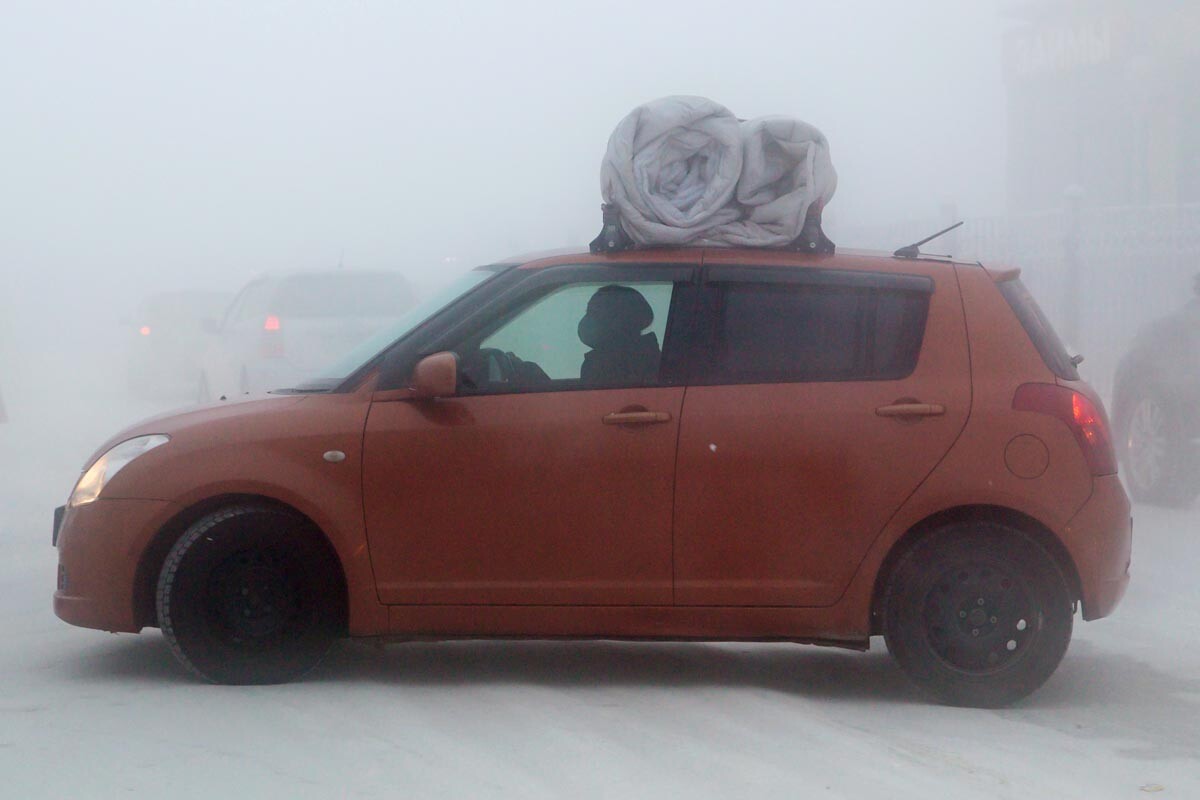 Don't be surprised to see a blanket on the top of a car in Yakutsk.

The further east you go in Russia, the more Japanese and Chinese cars you will see on the roads, and most of them are second-hand.

Yakutia is Russia's largest and coldest region. Two cities in the republic, Oymyakon and Verkhoyansk, have recorded temperatures around minus 70°C, while in the regional capital Yakutsk, temperatures of minus 50°C are considered normal for winter. What kind of car can you even drive in such extreme weather?

The automotive website Drom has compiled a rating of the best-selling cars in Yakutia. Having analyzed more than four million ads posted from 2015 to 2020, they found that the top five places in all those years were occupied by various right-hand drive models of the Japanese brand Toyota, while elsewhere in Russia the best-selling models are made by the domestic carmaker AvtoVaz (LADA). 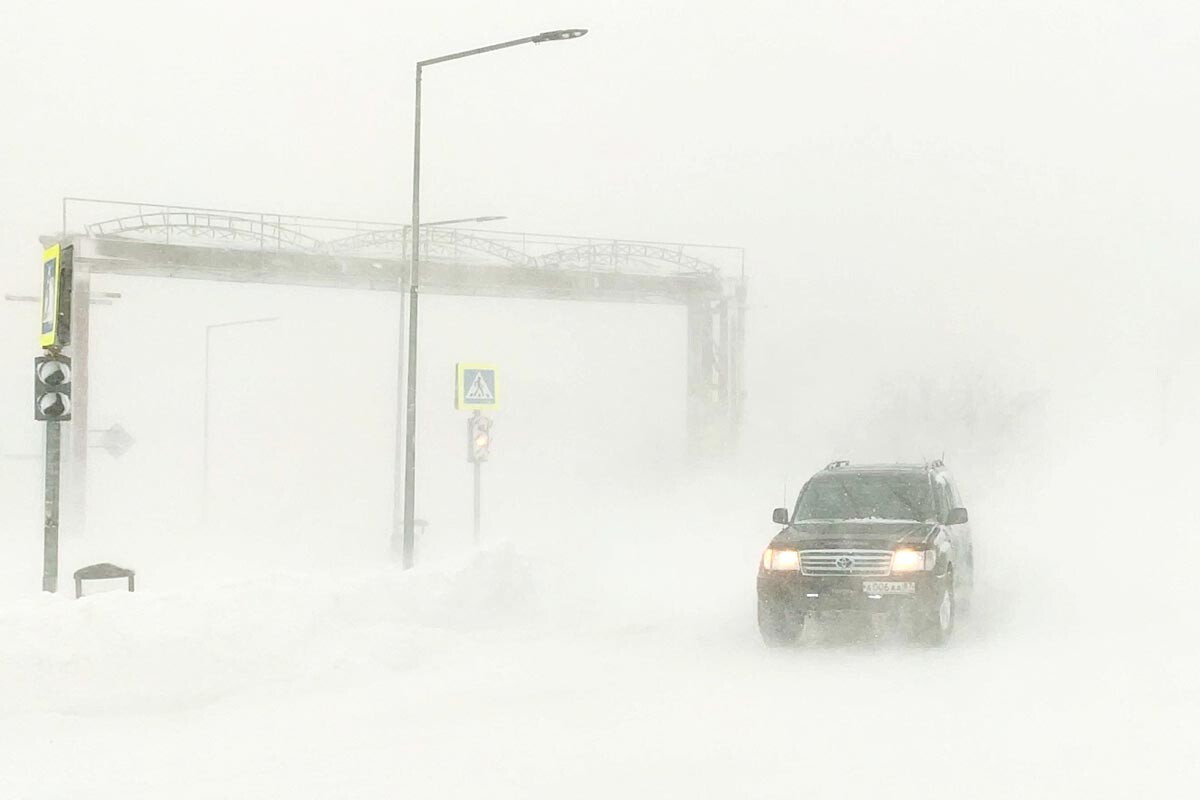 A car in Anadyr, Chukotka.

In late 2020, the top place was taken by the Toyota Vitz compact hatchback, followed by the Toyota Corolla Fielder station wagon, the Toyota Allion, the Toyota Premio sedan and the Toyota Ipsum minivan. They perform well on winter roads and get good gas mileage, which is very important since many residents of Yakutia keep their engines running for several months to prevent their cars from freezing.

“There is a strong belief that the CVT is unsuitable for winter. It works for me, knock on wood. However, when it gets cold the cable freezes, and sometimes it takes a lot of effort to switch gears,” writes Larisa from Yakutsk, who drives a Toyota Vitz in the winter and does not have a heated indoor parking lot. 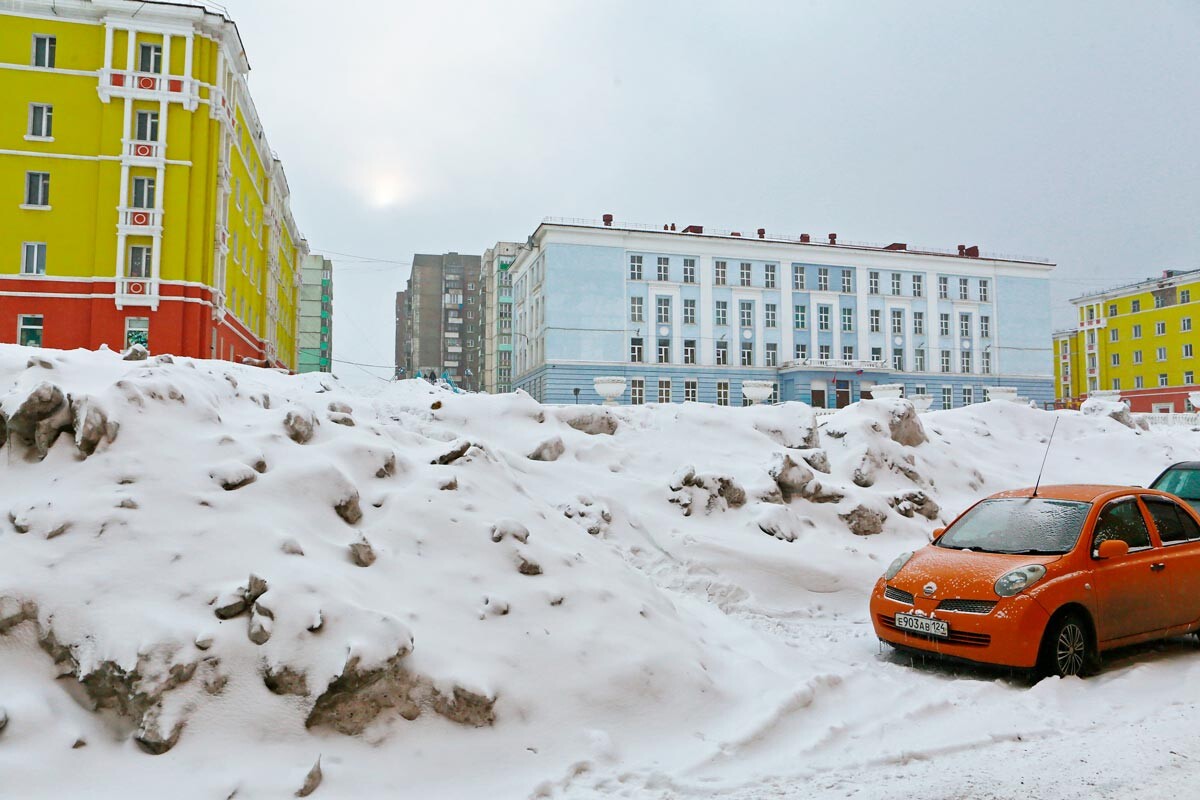 To weatherproof her car, she installed a second windshield, pasted film on the windows so that they are not covered with frost and installed a Webasto heater.

“The Webasto does a great job with temperatures of minus 35°C and warmer. When it gets down to less than minus 40°C, the CVT freezes, and when the temperature is below minus 45°C the wheels become square,” she says. “However, after about five kilometers of slow driving, the wheels begin to regain their natural shape.” 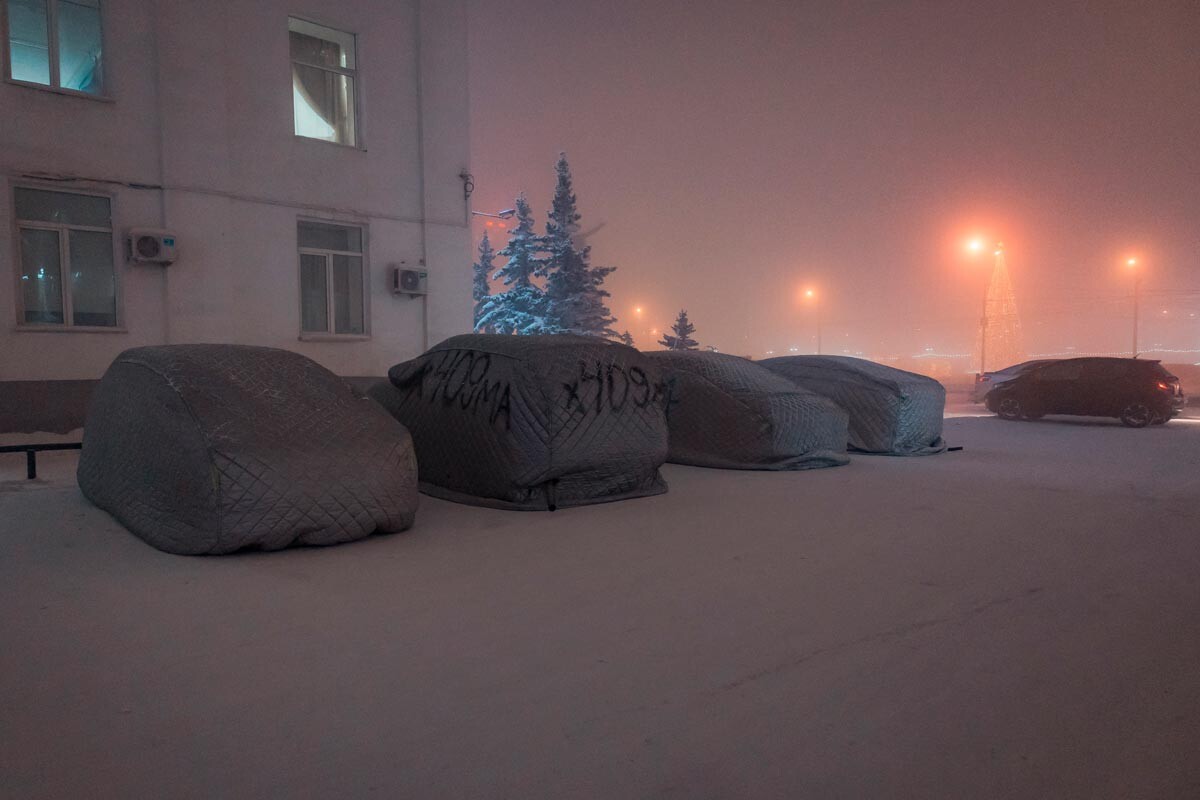 Cars in Yakutsk are covered with special blankets.

“If you have a garage and don't leave the city, you don't have to add any extra features to make your car warmer,” writes another driver from Yakutsk. “At least with Toyota cars you don't. I currently drive a Corona Premio, and all I have for insulation is some cardboard. At night, the car is in a warm garage, while during the day it is parked outside my office.”

If you look at car ads in Norilsk (in the north of Krasnoyarsk Territory), two Toyota models are the clear favorites. Although there are a lot of Land Cruisers on sale there as well... The Toyotas are followed by Russian Ladas (mostly the new Vesta model), the KIA Rio, Hyundai (the Solaris, of course) and Nissan (with the X-trail SUV in the lead). In Chukotka, drivers have largely similar preferences.

There are few diesel cars in the cold regions since diesel freezes at temperatures below minus 50.

What do people in rural areas drive? 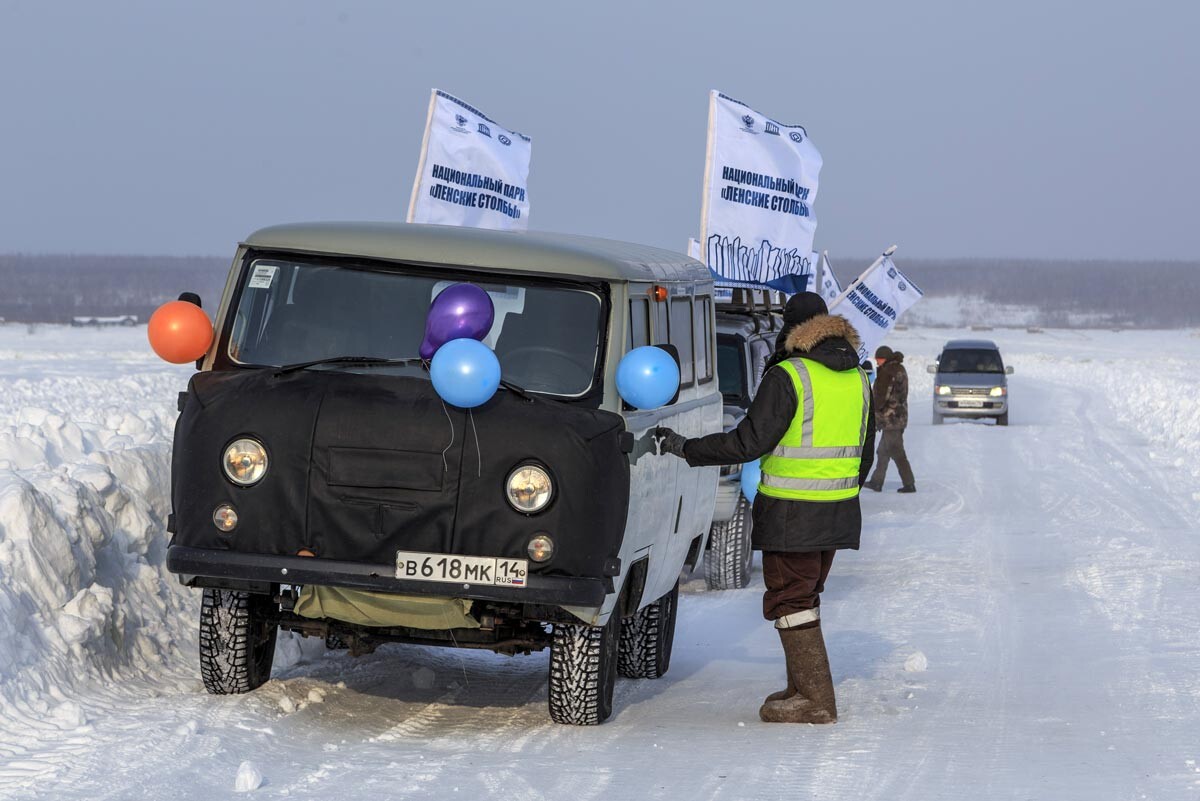 "Bukhanka" with tourists at the Lena Pillars national park in Yakutia.

Among Russian vehicles, the most popular in the north are the modern UAZ patriot SUV and the “Bukhanka” (Russian for “bread loaf”) minibus, which was designed back in the Soviet era.

Almost all these minibusses are adapted to the severe cold by strengthening the frame and installing an additional stove. Sometimes, after alterations, little remains of the original Bukhanka beyond the exterior design. 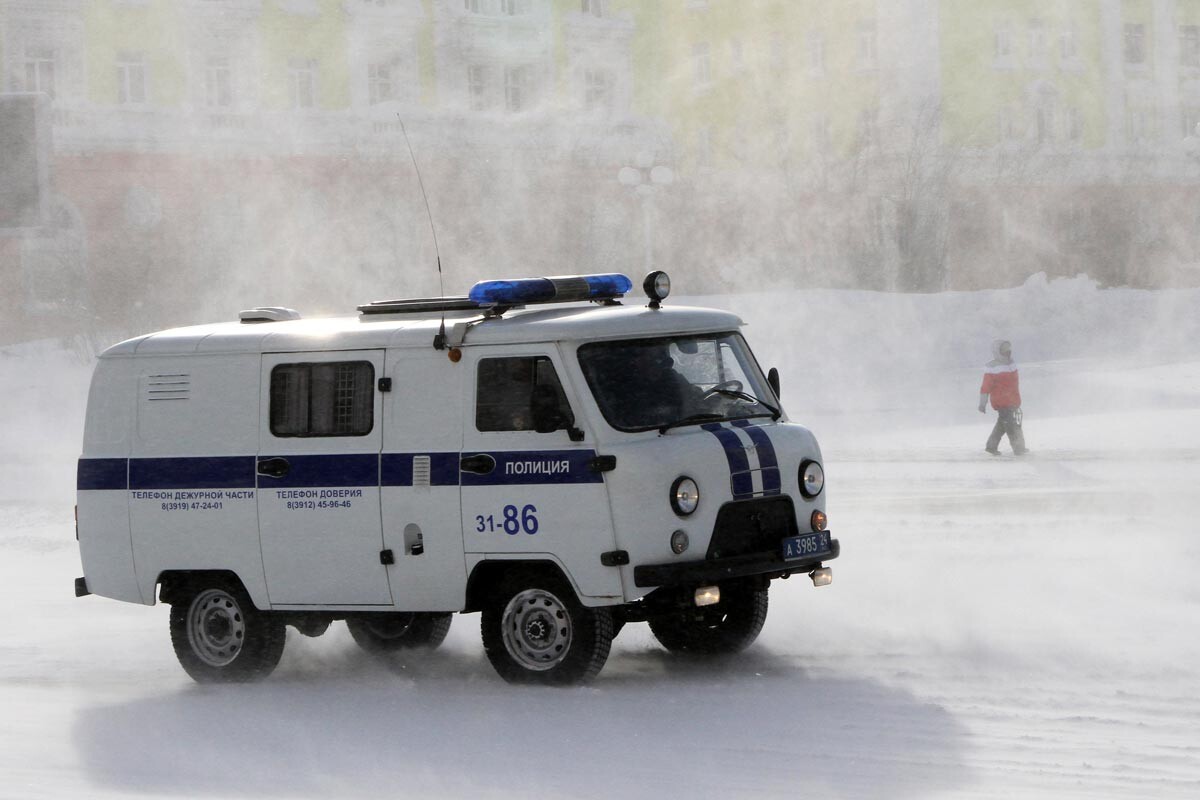 A police car in Norilsk.

And yet, when it comes to off-road driving outside of cities, this vehicle still has no competition in its price range. It costs around a million rubles (just over $13,300 at the current exchange rate), which is approximately the same as a budget-friendly KIA Rio sedan. While it might not have as many additional features, not getting stuck on a highway when it is minus 50 outside is far more important than having parking sensors. 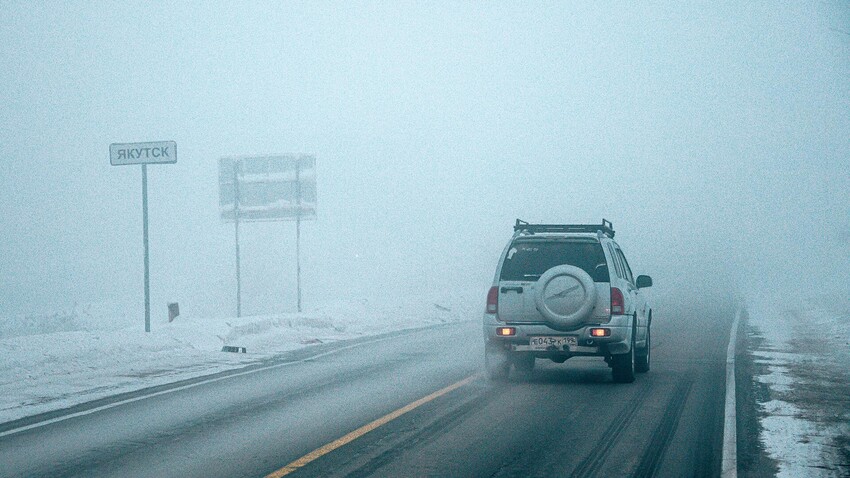 Entering the city of Yakutsk, the temperature fall to minus 50°C.

Another vehicle that is ubiquitous in the north is the GAZ Sobol, a small Russian-made truck.

“So far I am completely satisfied with my Sobol,” says a mobile intensive care unit driver from Yakutsk, Sergey Volkov. “I am happy with the vehicle. During its first 40,000 kilometers, there have been no serious breakdowns. Unlike the UAZ, it offers an excellent field of vision and clear controls." 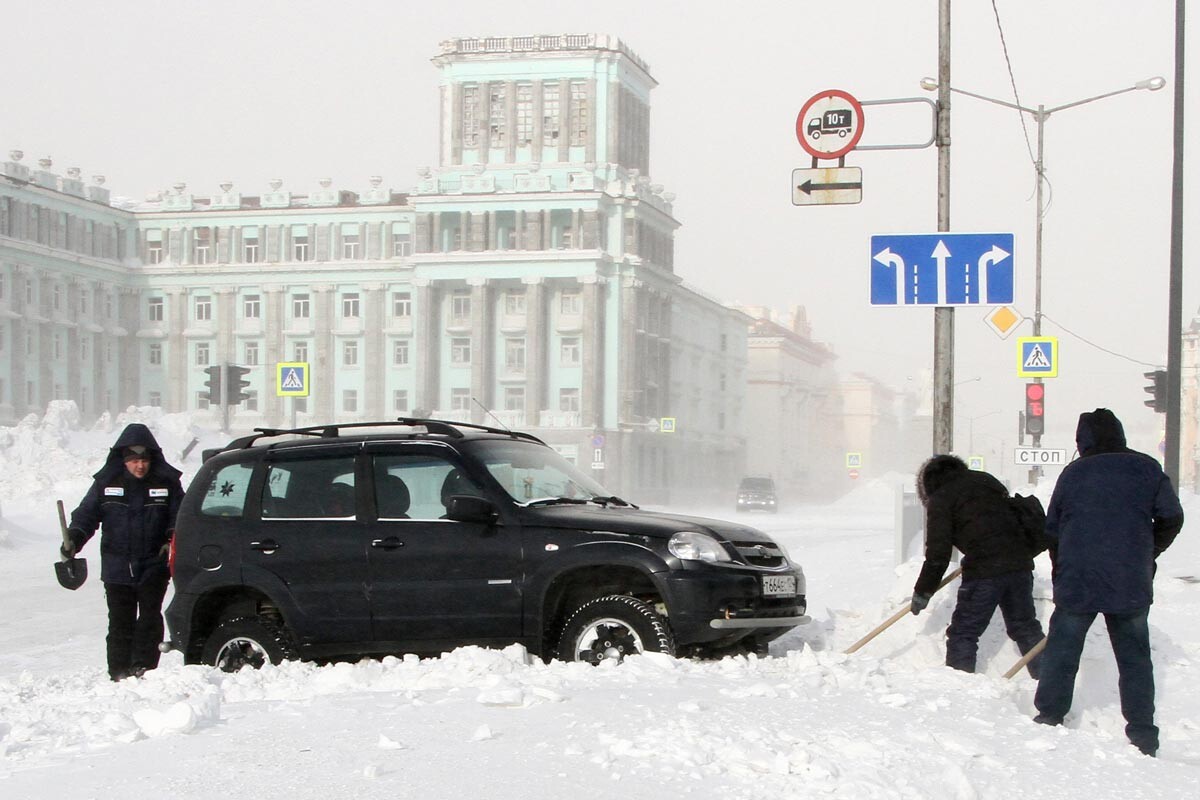 After snowfall in Norilsk.

Extreme travelers and enthusiasts of road trips to the Siberian taiga and Far Eastern winter destinations generally prefer traveling in large off-road vehicles like the UAZ Patriot and UAZ Hunter. That said, it is still wise to postpone road trips to these regions until the summer and never travel out of cities alone.

Take a look at this video and you will immediately see why: