Typical Moscow resident in the guise of action figures 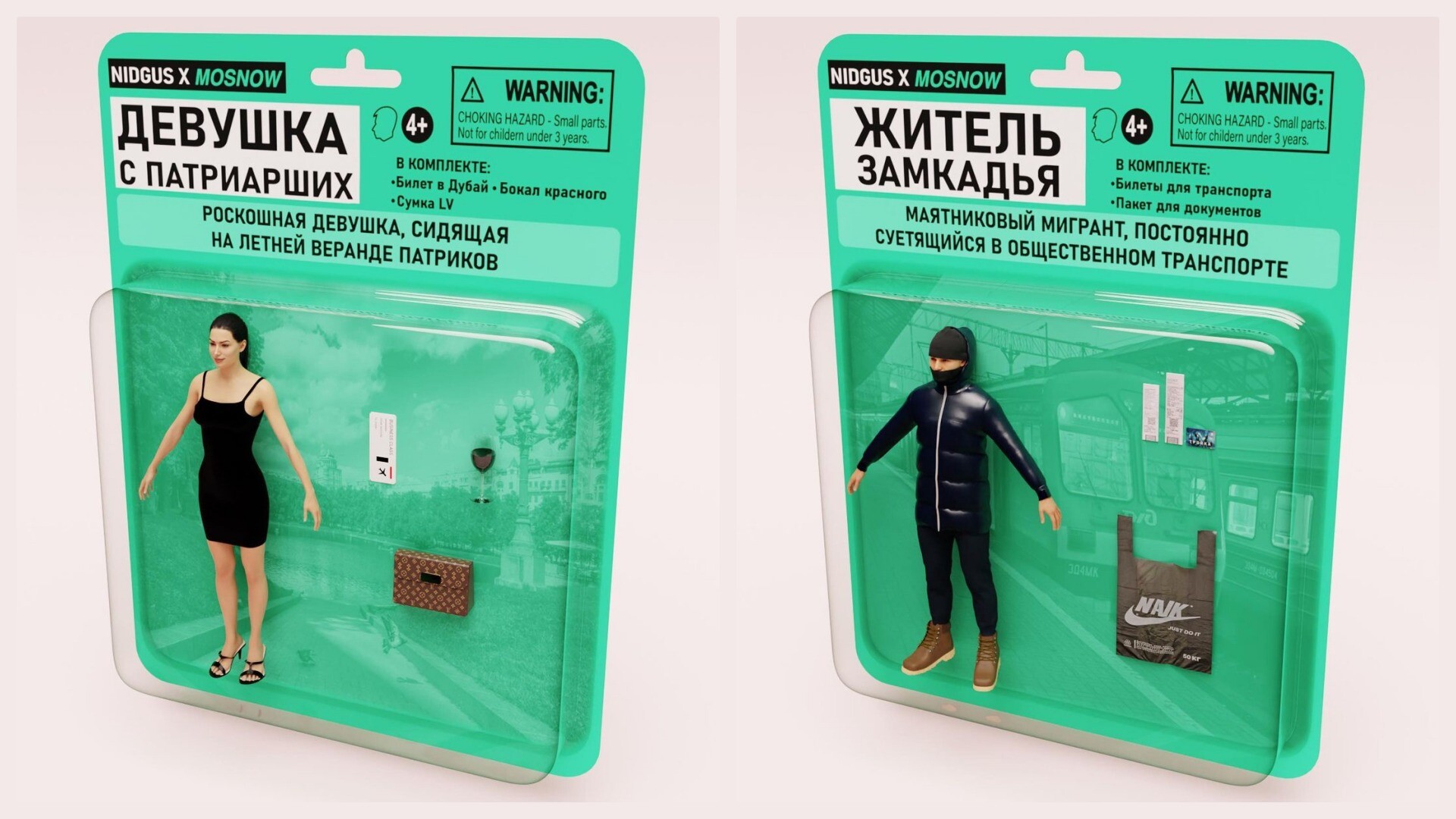 @wow.mosnow; @nidgus
An urban fashionista, a white-collar worker from Moscow City, a restless migrant and a glamor girl with an LV bag – these and other types of Muscovites were highlighted by Russian designers.

An artist and designer from the NNN Art Group, under the Instagram alias @nidgus, and the Moscow Now Telegram channel have created a virtual collection of action figures of the types of people who are most frequently encountered in the Russian capital.

The collection consists of the following: 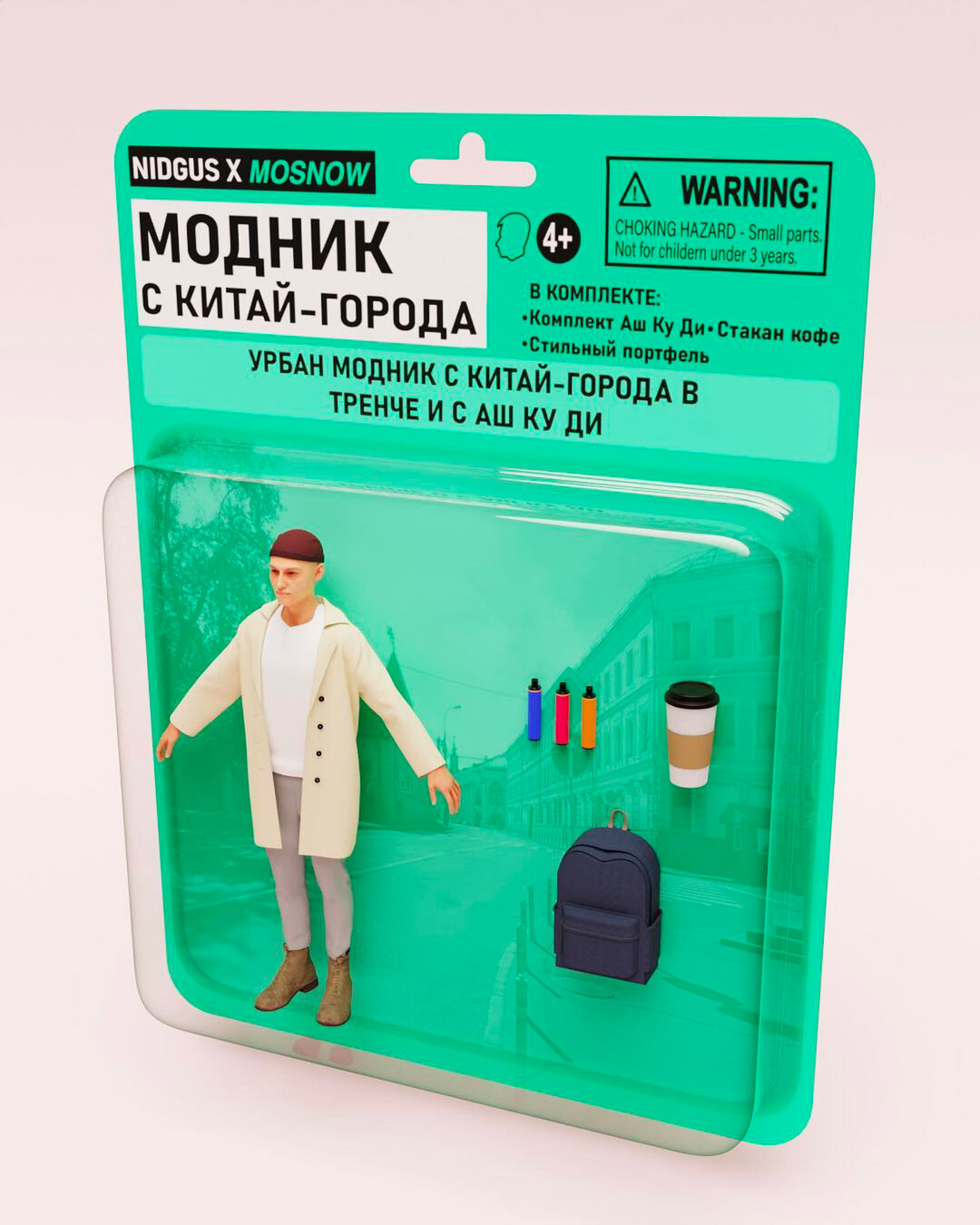 Kitai-Gorod is the main haven for young bar and club lovers. Our fashionista (most likely a student) has no problem with face control, will dance until morning, with breaks to chat and vape with other partygoers. She (or he) will then wake up at around lunchtime as if nothing had happened, head for the nearest trendy coffee shop, order a flat white with banana milk, sweetener and coconut-maple-strawberry syrup, sit down at a table, take a laptop out of their bag, and maybe, just maybe, start on that long overdue piece of coursework. 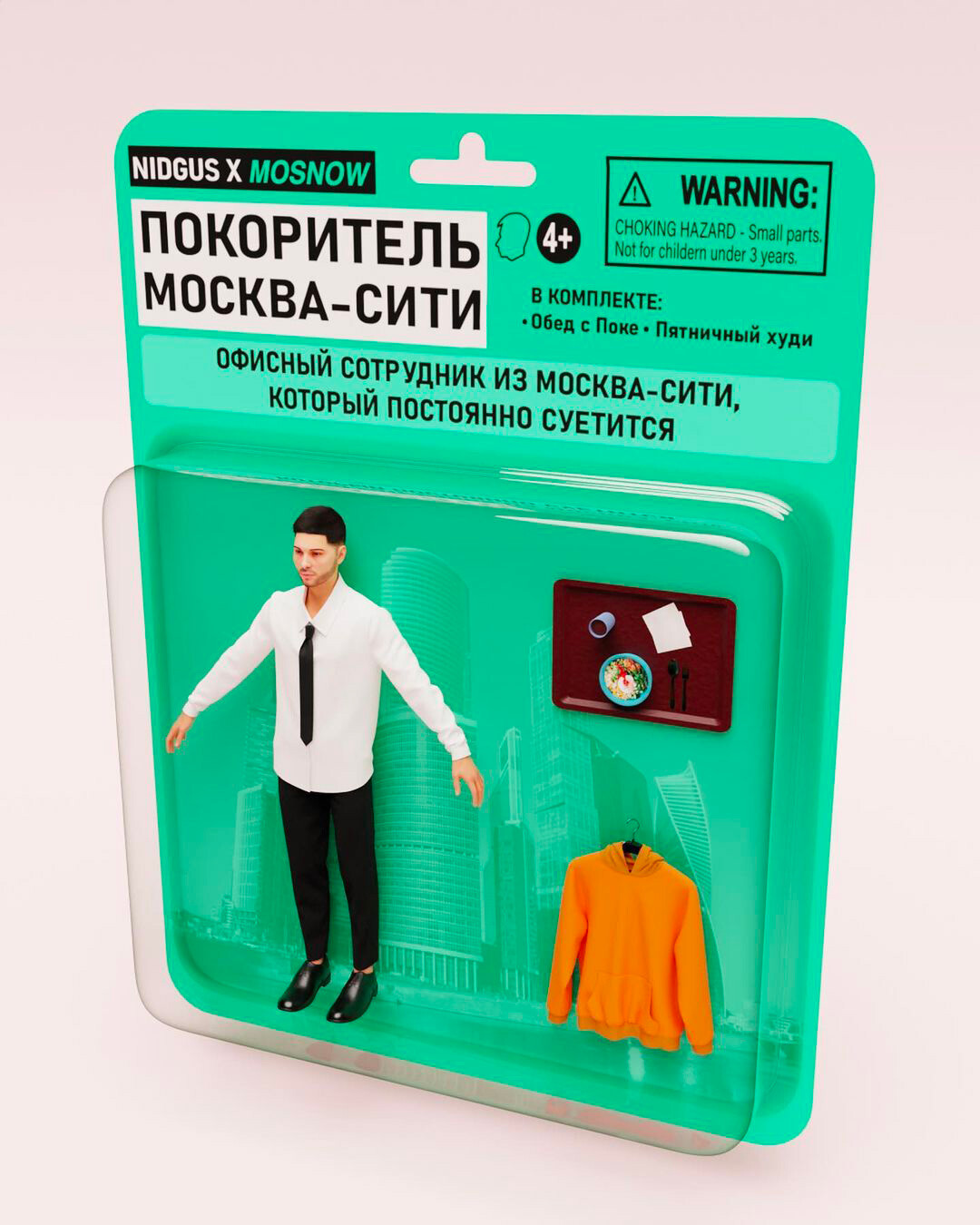 This hero was hired a year ago by a large bank or startup as a product manager, and even given their own small development team. In the neighboring skyscrapers are ministerial office workers and managers of large international companies, so their appearance has to match accordingly. Therefore, our conqueror is dressed in shiny loafers, trousers, shirt and tie from Zara. Their enthusiasm and product ideas would be enough to power a small country. But the software developers are slow and make mistakes in the code, while the bosses’ deadlines are unrelenting. So, every couple of hours or so they have to descend from the 56th floor to the canteen for a coffee and a bite of fashionable poke (Hawaiian-style raw fish) to recharge their batteries – much healthier than McDonald’s. On Fridays, our product manager takes selfies in the elevator, throws their crumpled shirt into their backpack, puts on a hoodie and takes a Comfort-class taxi with friends to unwind and de-stress in a hookah lounge or bar.

3. Migrant resident of Zamkadye, always on the move 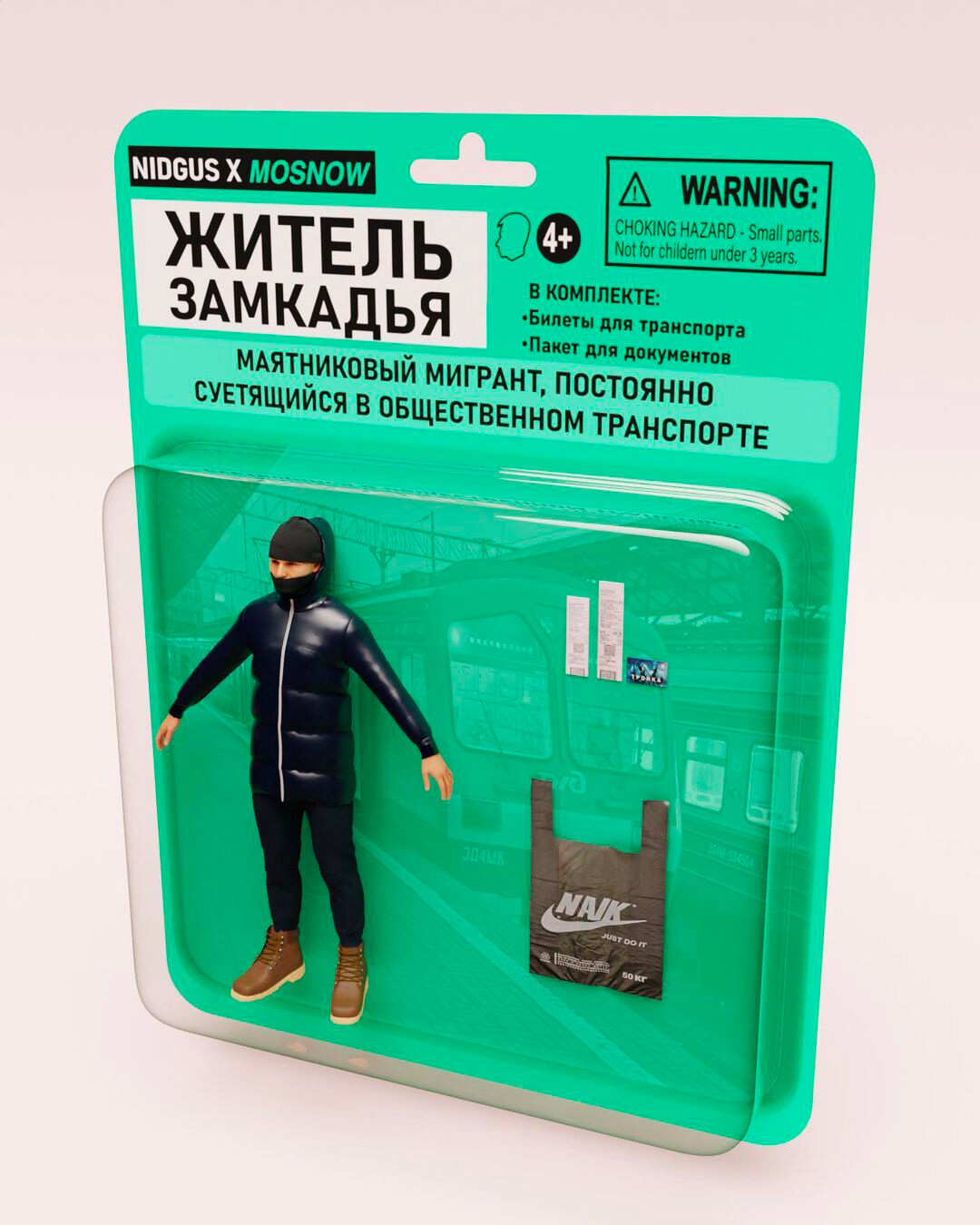 Never seems to sleep. Works as a janitor in the morning, sells fake watches in the street markets in south-eastern Moscow during the day, and in the evenings feasts on shawarma at a 24-hour takeout stall or delivers ready-made food by bike. After recharging with three bowls of instant noodles, tea and five 3-in-1 coffee sachets, he then has to find the time to apply for a work visa extension at the migration center. 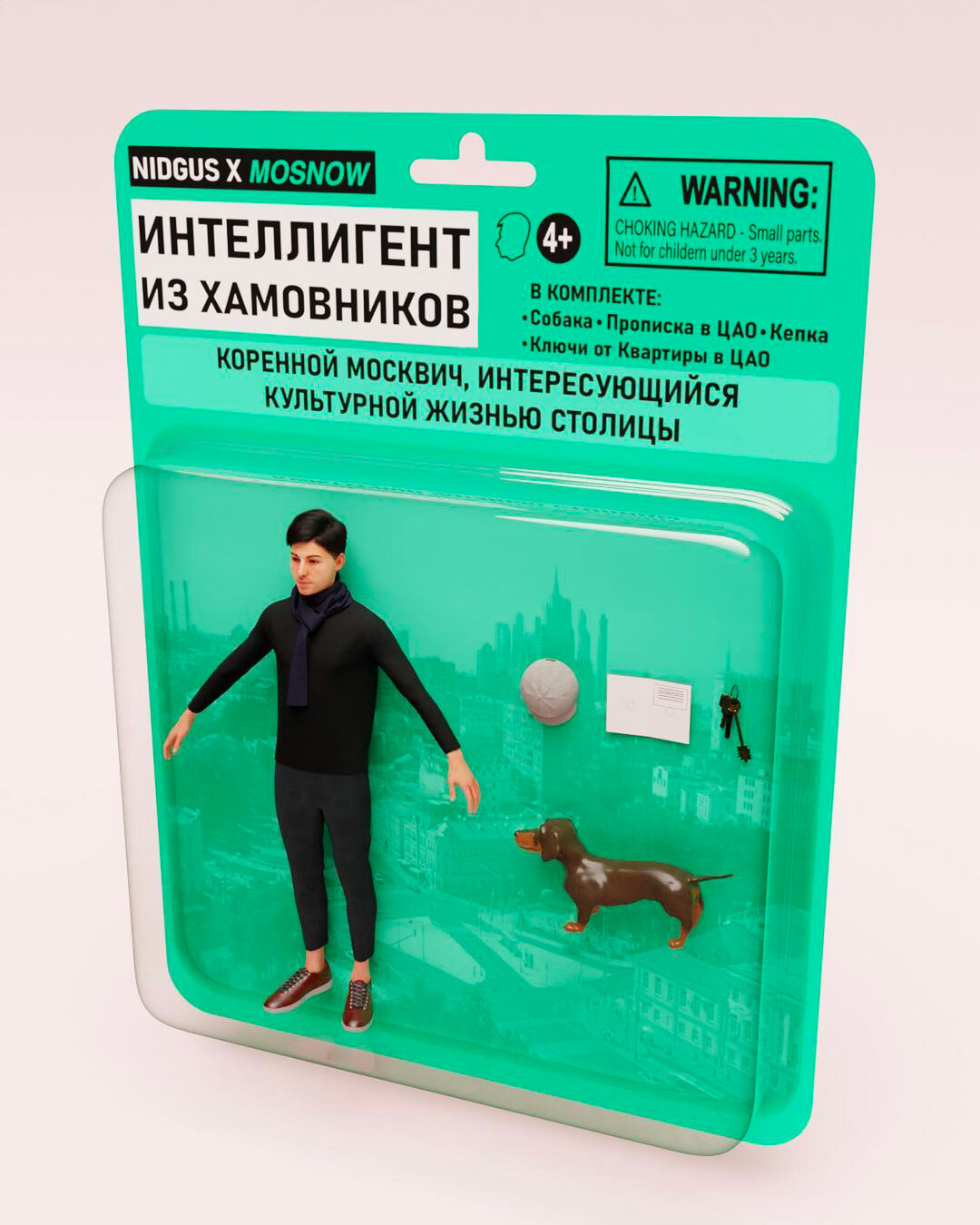 Khamovniki, one of Moscow’s plushest districts and full of historical buildings and museums, was once home to writers Leo Tolstoy and Mikhail Bulgakov. Now, popular TV presenters and singers buy up apartments here, becoming neighbors with our hero – the native Muscovite. He or she can spend the whole dreary Moscow winter at a distant southern beach without working at all – the income from renting out an apartment in this district is more than enough to live on. But if they choose to live in Khamovniki themselves, and not rent it out, they will walk the historic streets with a dachshund in tow, dine in cozy street cafes, bemoan the increasing numbers of ever more neighbors, and discuss constructivism at exhibitions in the New Tretyakov Gallery wearing a stylish scarf.

5. Glamor girl on the veranda at Patriarch’s Ponds 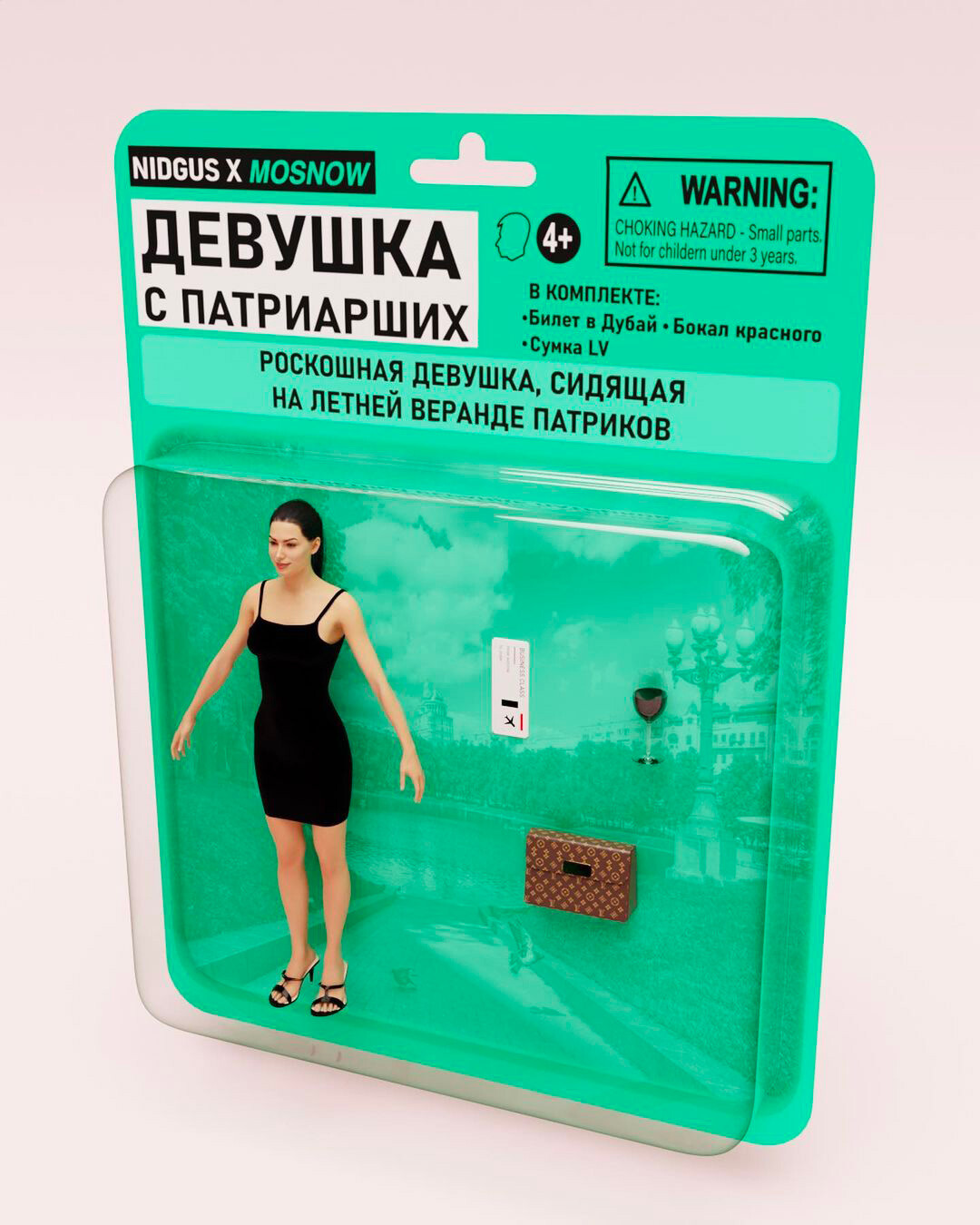 Patriarch’s Ponds, another historic district of Moscow, has long been a fashionable leisure spot, as well as being very expensive. In the summer evenings, traffic jams of Lamborghinis and Ferraris fill the roads,and  the local bars are populated with rich kids and trending bloggers, while students sit by the ponds eating fast food and slurping wine from plastic glasses.

The glamor girl also frequents this place in the evenings in the hope or expectation of being noticed by the driver of an expensive car, or of making the acquaintance of the wife of a member of the intelligentsia who happens to have enough spare cash to buy an apartment nearby. Even if nothing comes of it, she doesn’t lose heart – she can always fly to Dubai and look for her prince there.

For now, these figures exist only virtually, but their creators are considering putting them into production, and are currently expanding the collection, Mikhail Grechka, PR manager of the Moscow Now channel, told the newspaper Metro.

“People wrote online that we missed some character types. For example, the ever-busy courier. So we’re making a second part,” says Grechka.