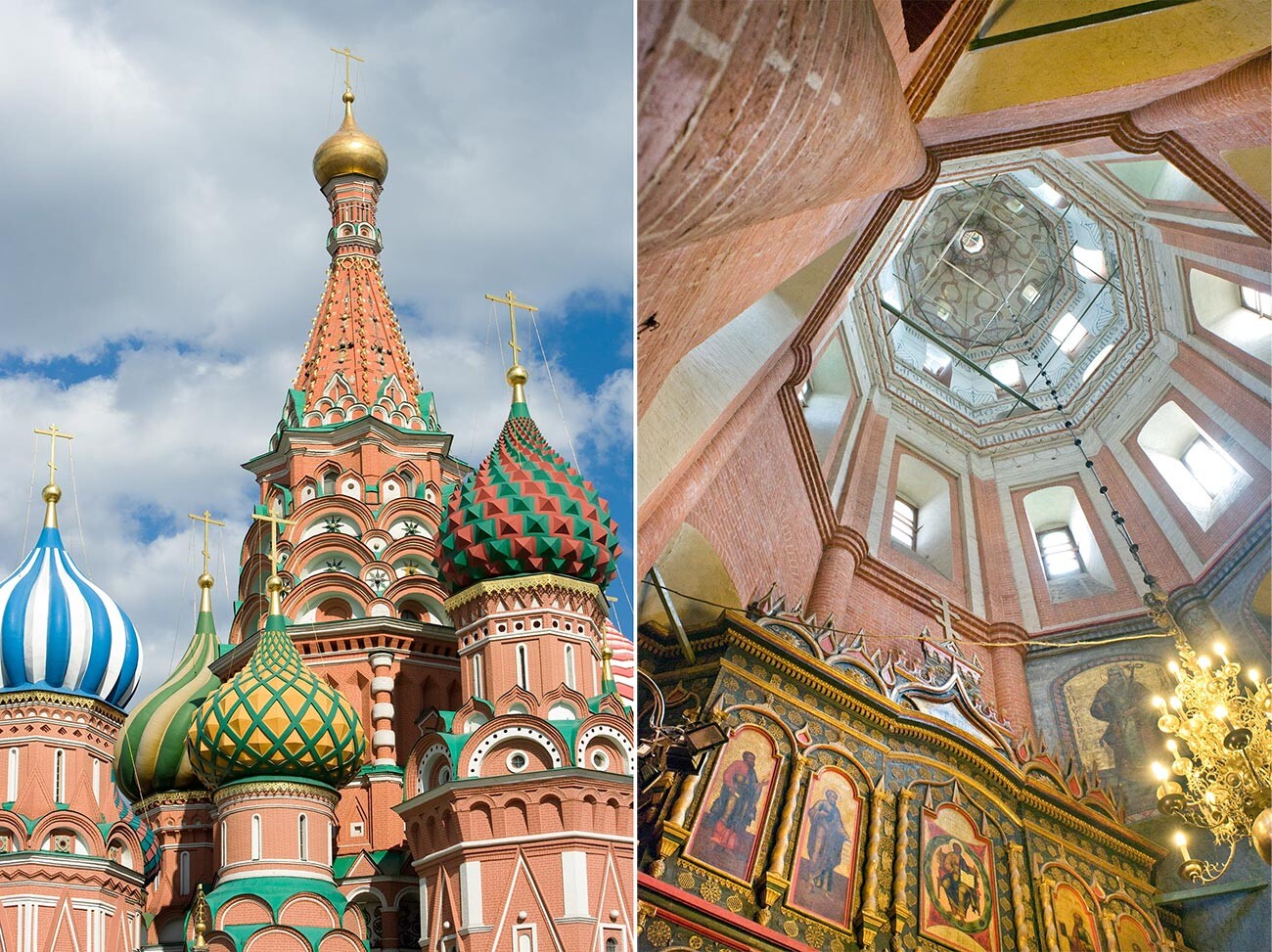 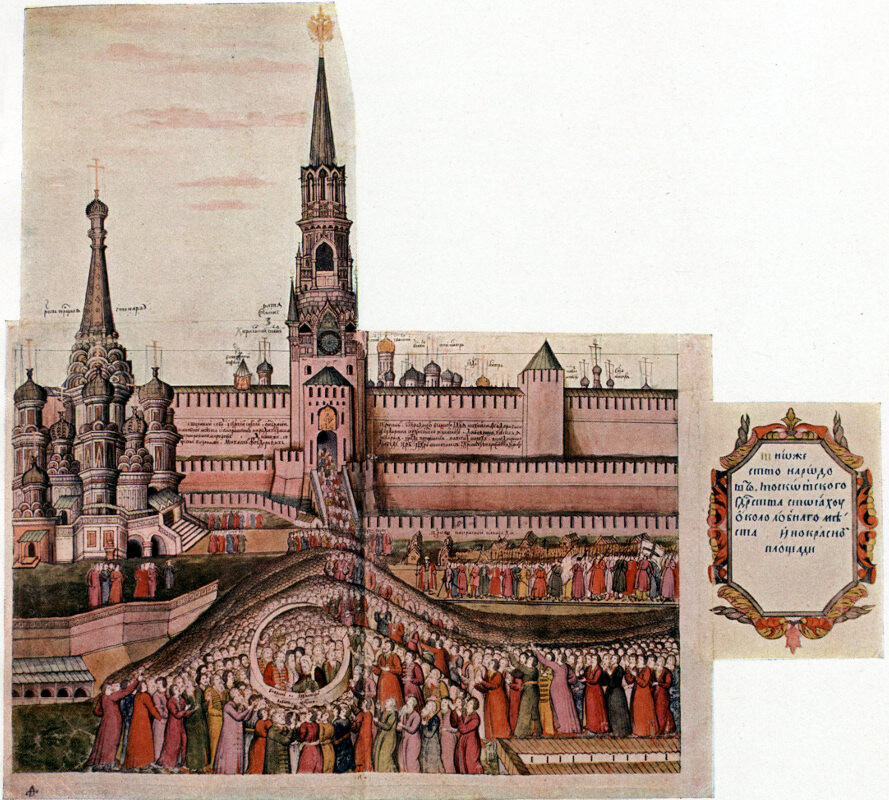 The watercolor purports to show the solemn occasion on February 21, 1613 when the people swore fealty to the newly chosen Tsar Mikhail on Red Square. The main architectural feature of the watercolor is the multi-domed St. Basil's Cathedral. Despite its fame, the complex structure continues to pose riddles. Even its name varies: from the popularly accepted “St. Basil’s” to its formal designation as the Cathedral of the Intercession on the Moat. In the 17th century it was also referred to as “Jerusalem.”

Having photographed this consummate landmark for decades, I was able in 2012 to re-photograph the interior with a digital camera. 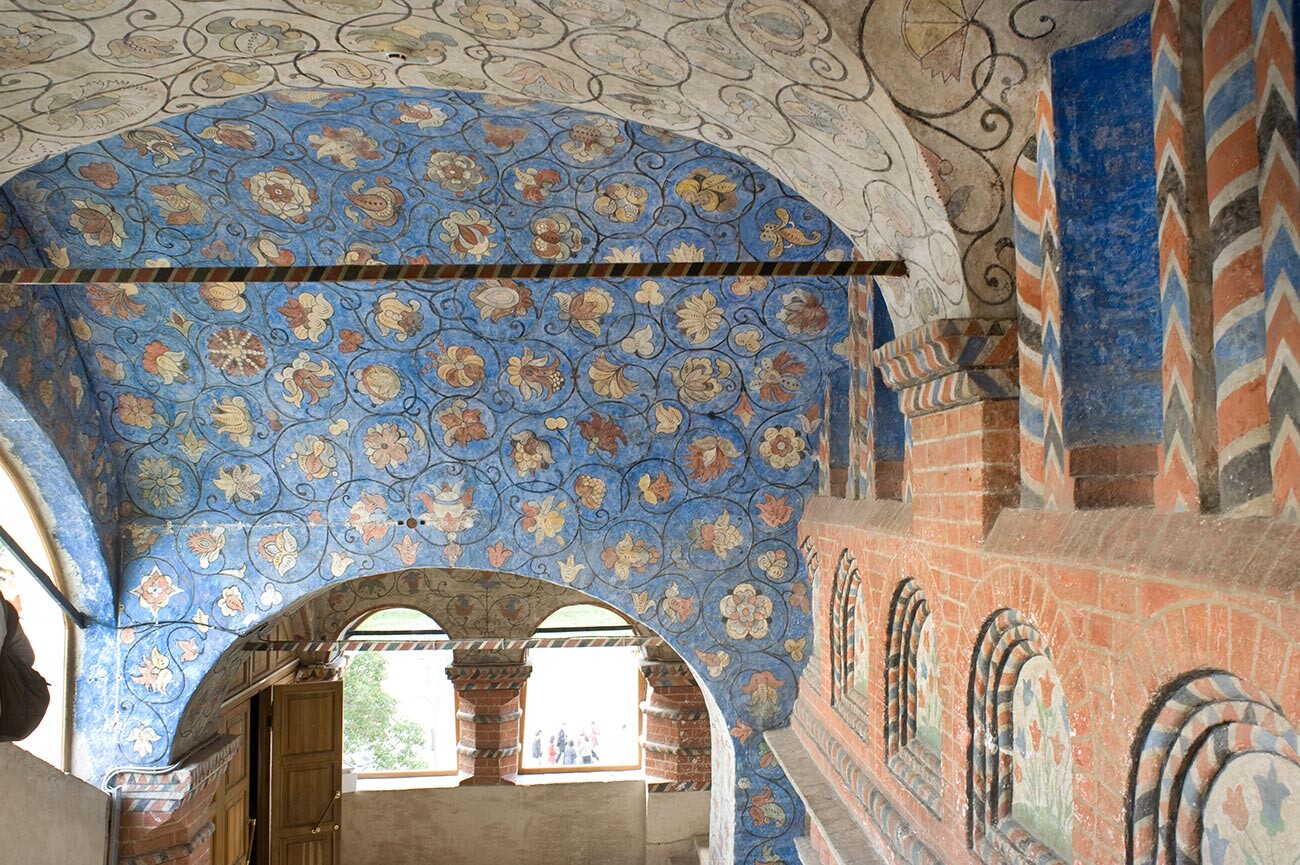 St. Basil's is located on high ground above the left bank of the Moscow River and provides a visual landmark over a large space known since the middle of the 17th century as Red (or "beautiful") Square. The church accordingly served as a symbolic link between the Kremlin, the center of political power, and the posad, the densely settled mercantile area in Kitay-Gorod.

The origins of St. Basil’s are as complex as its form. Soon after Tsar Ivan IV (the Terrible) captured the city of Kazan on October 1-2, 1552, he commanded that a church dedicated to the Holy Trinity be erected on the square outside the Kremlin at the Frolov Gate. 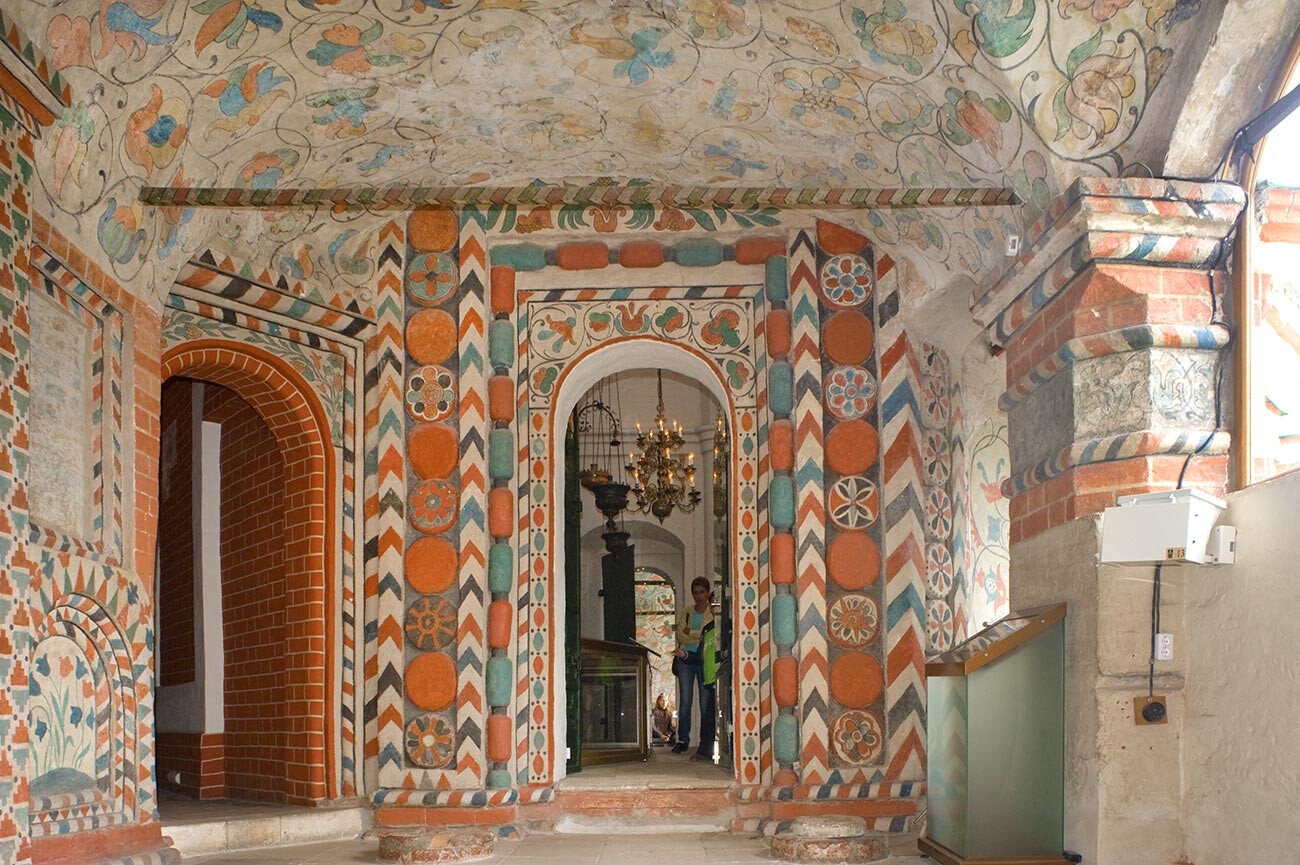 Ivan intended to rebuild that church on a scale reflecting the importance of his defeat of Kazan, which not only eliminated a troublesome relic of Mongol power, but also opened a vast area for colonization and trade. Although the temple might seem a chaotic agglomeration of parts, its architects – generally recognized as Ivan Barma and Postnik Yakovlev – created a logical plan with a wealth of layered meaning. 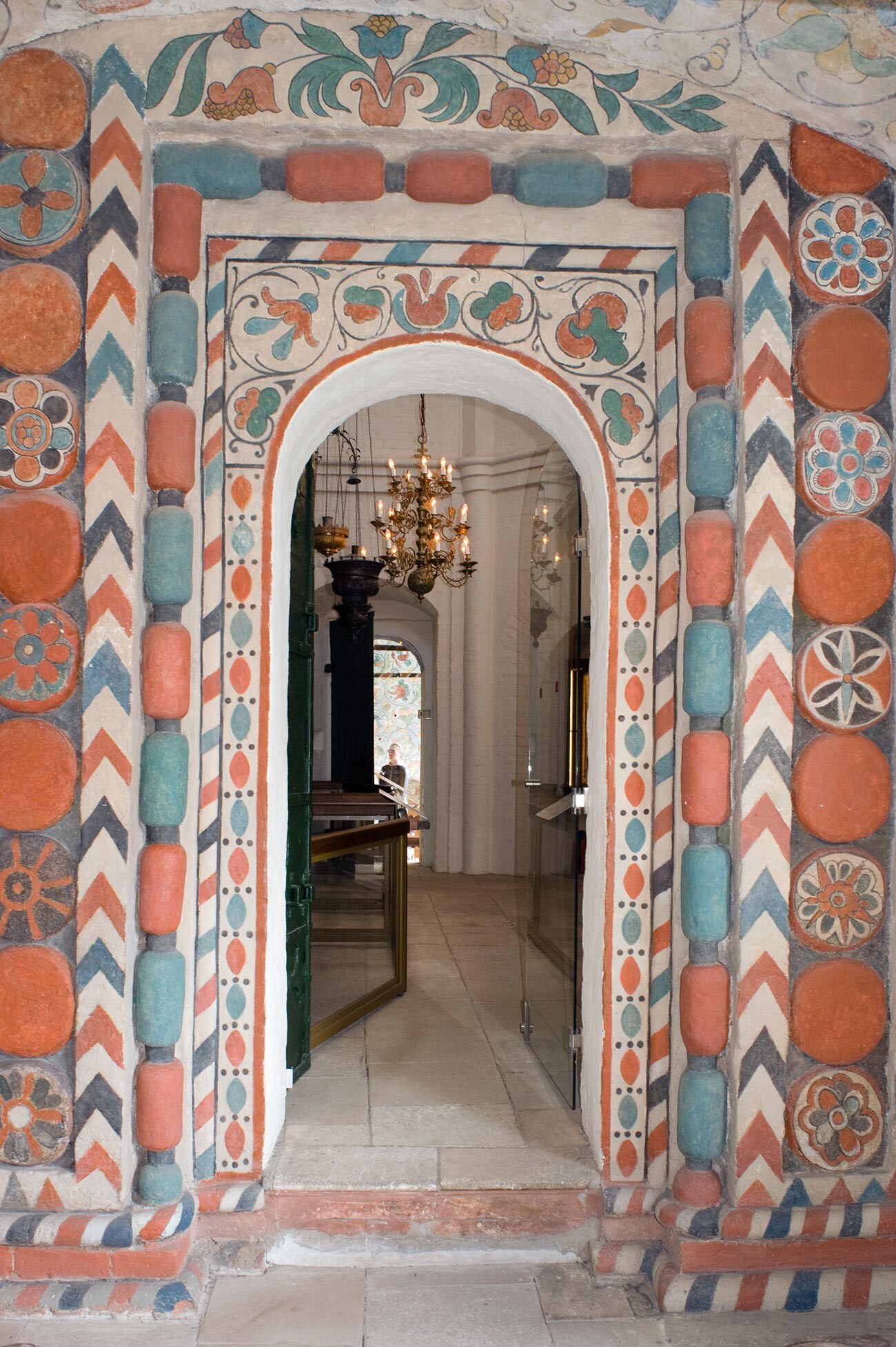 The Intercession Cathedral ensemble (St. Basil’s) consists of a central tower surrounded by eight free-standing churches on a common terrace that was enclosed and painted in the 17th century. The plan of the ensemble embodies the trinitarian concept: each axis, diagonal and side has three towers, and the structure on the terrace level is divided into three parts.

On the interior, the plan creates an enchanting maze of decorated portals and low passageways that link the compact towers of the individual churches. Each of these spaces can accommodate only a few worshippers, and services at the temple complex were often held outdoors on an adjacent part of Red Square. 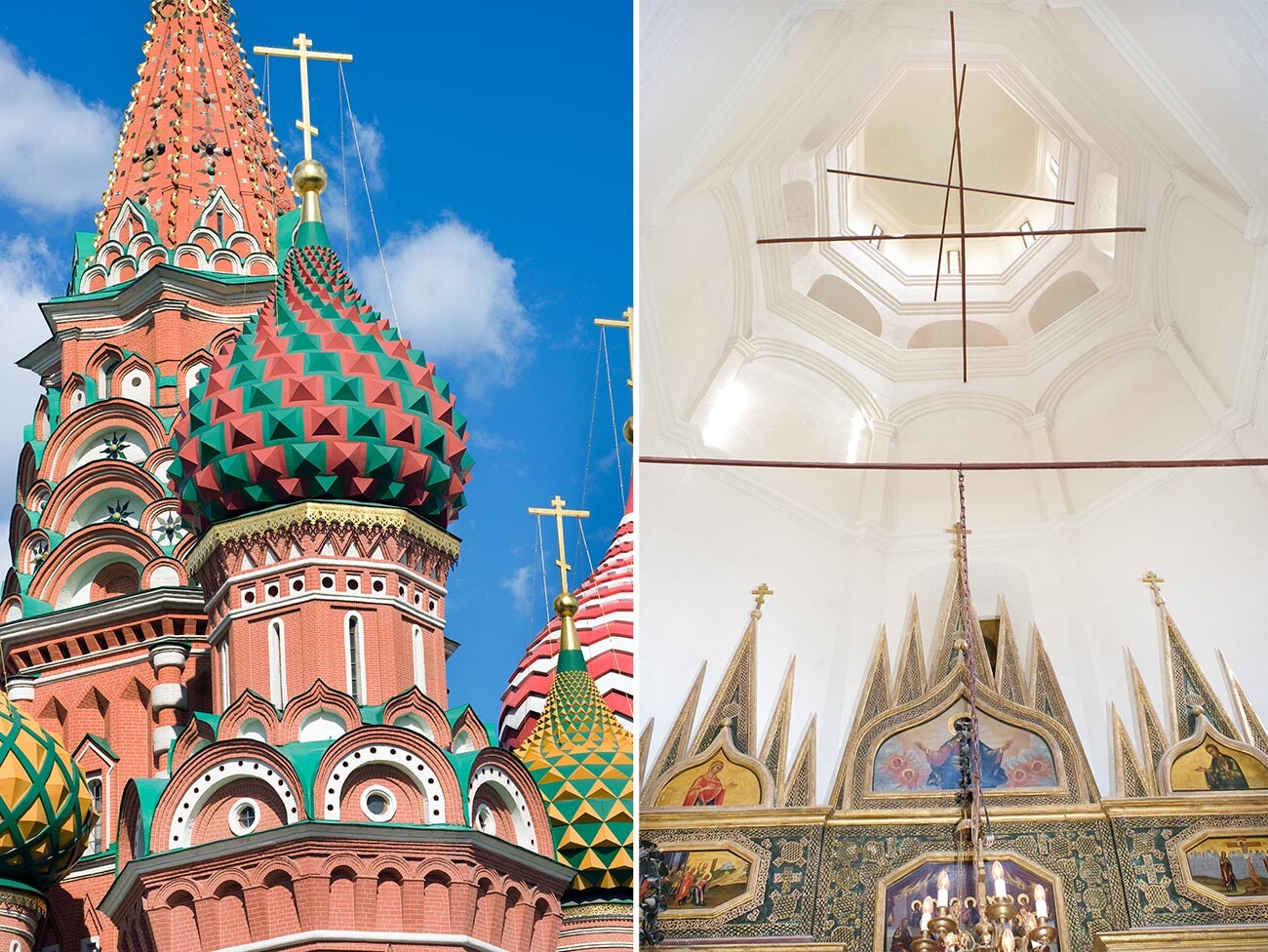 An exploration of the interior begins with the main entrance gallery, located on the west side with flanking stairways (capped with pitched roofs that leads to the elevated terrace connecting the component churches. Originally open, the terrace was enclosed during a renovation of the ensemble in the 1680s. Although tightly constrained, the gallery has a festive appearance with elaborate decorative motifs painted in phases during the 18th and early 19th centuries.

The west tower church, located at the center of the west entrance gallery, is dedicated to the Entry of Christ into Jerusalem (Palm Sunday). It has been popularly associated both with the triumphal entry of Ivan the Terrible into Kazan and the triumphant return of Ivan’s army to Moscow.

The association of the two events – Ivan’s entry into Kazan and Christ’s entry into Jerusalem – led as early as 1557 to the institution of an annual ritual in which the tsar, riding a horse decorated as a donkey, simulated the Palm Sunday procession. At first the ritual took place by the Kremlin cathedrals, but evidently by 1559 the the procession was reoriented beyond the Kremlin to the Trinity Church, under construction as the eastern chapel of the enlarged Intercession Cathedral. 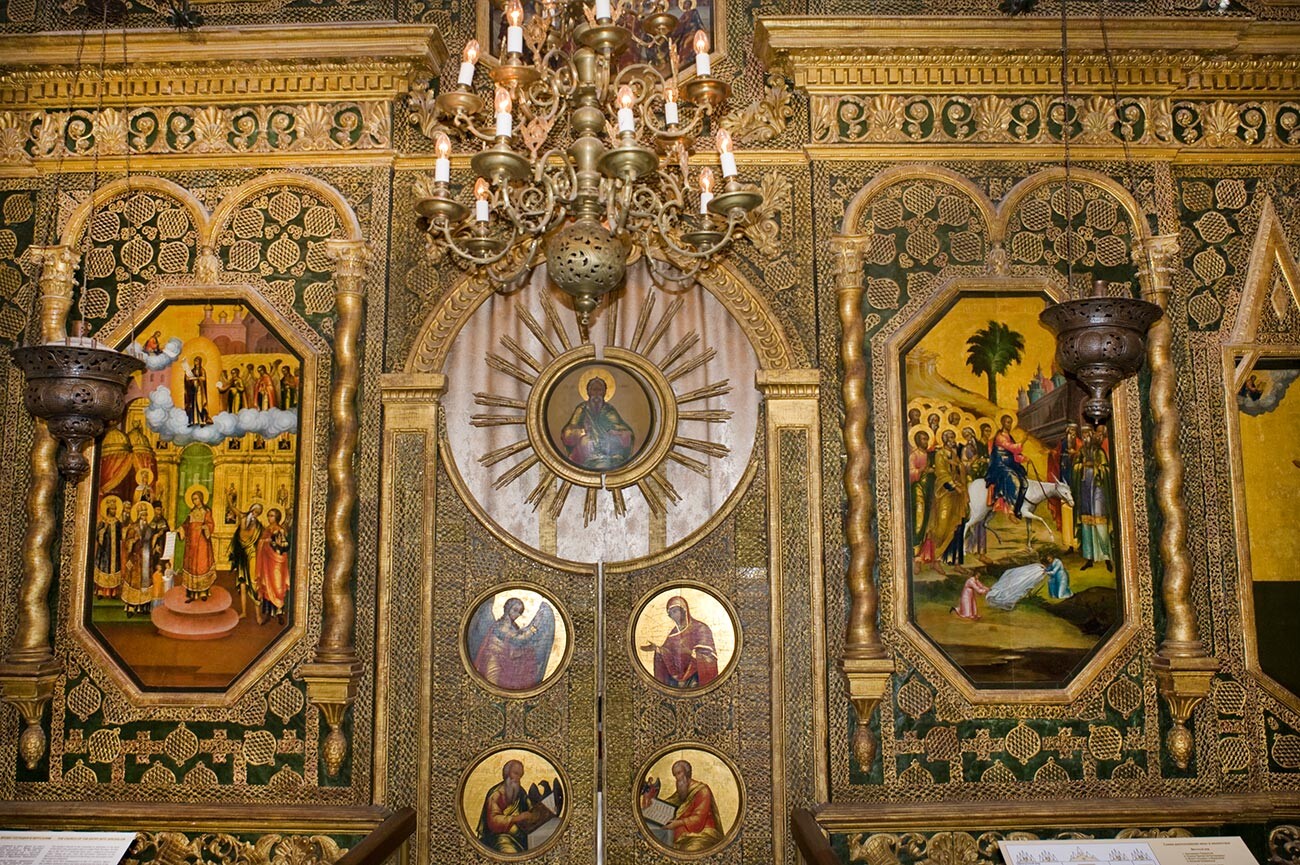 The inference is that the new shrine represented the sacred city of Zion.

The interior of the west church, octagonal in form (like the four other “major” towers), culminates in an octahedron supporting the dome. Its unadorned whitewashed brick walls stand in contrast to an icon screen that includes fragments from small churches formerly located around Red Square. Here, as elsewhere, the interior is crisscrossed with iron tie rods that stabilize the structures.

Mix of east and west 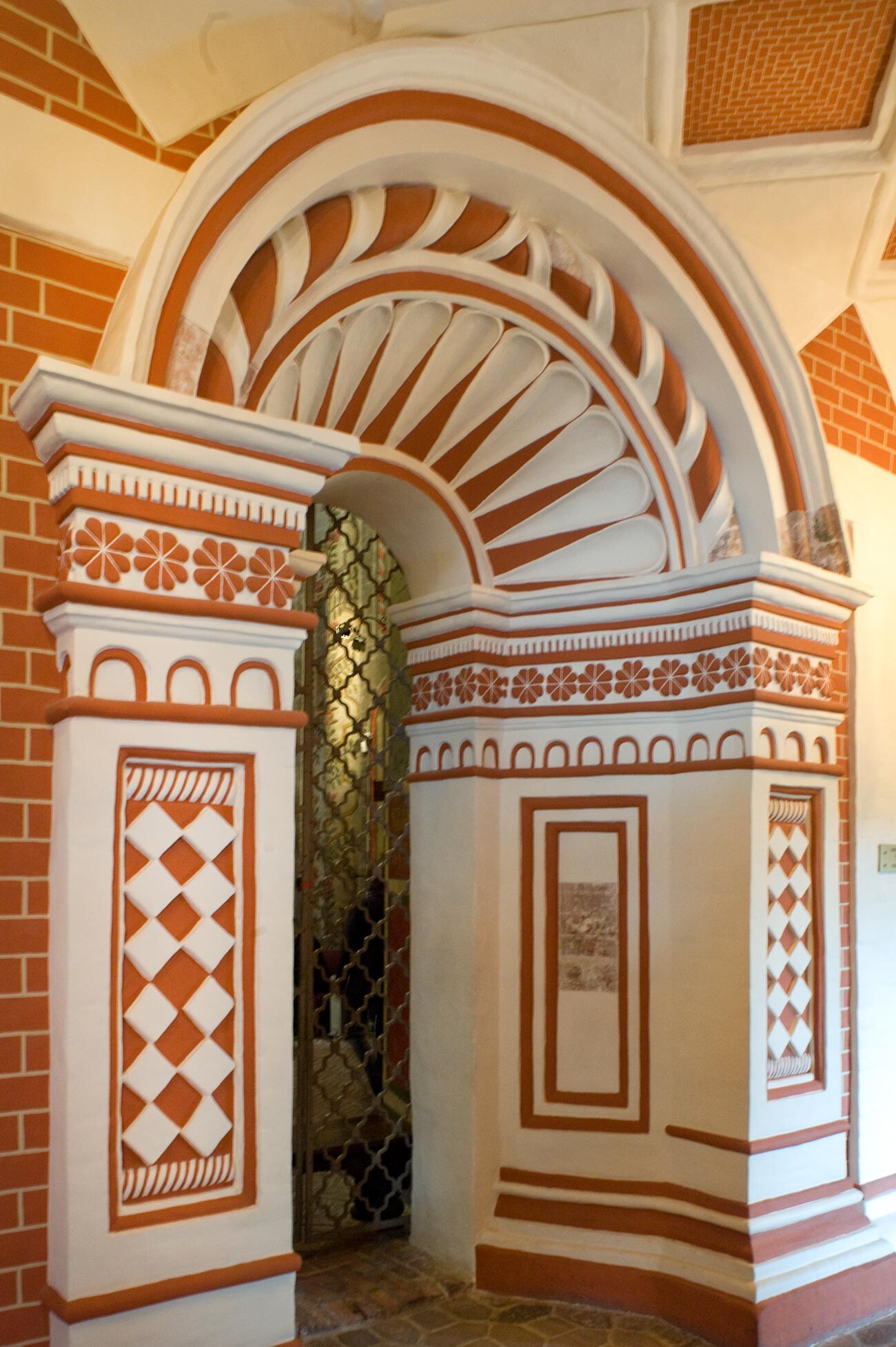 Leaving the Jerusalem Church, the decorated main entrance to the central component of the entire complex is visible. This is the towering church dedicated to the Intercession of the Virgin, one of the most revered of Russian church holidays. Originally based on a Byzantine miracle, the Intercession became a celebration of the divine protection extended to medieval Rus. The day of its observance, October 1, coincided with the start of the final storming of Kazan. 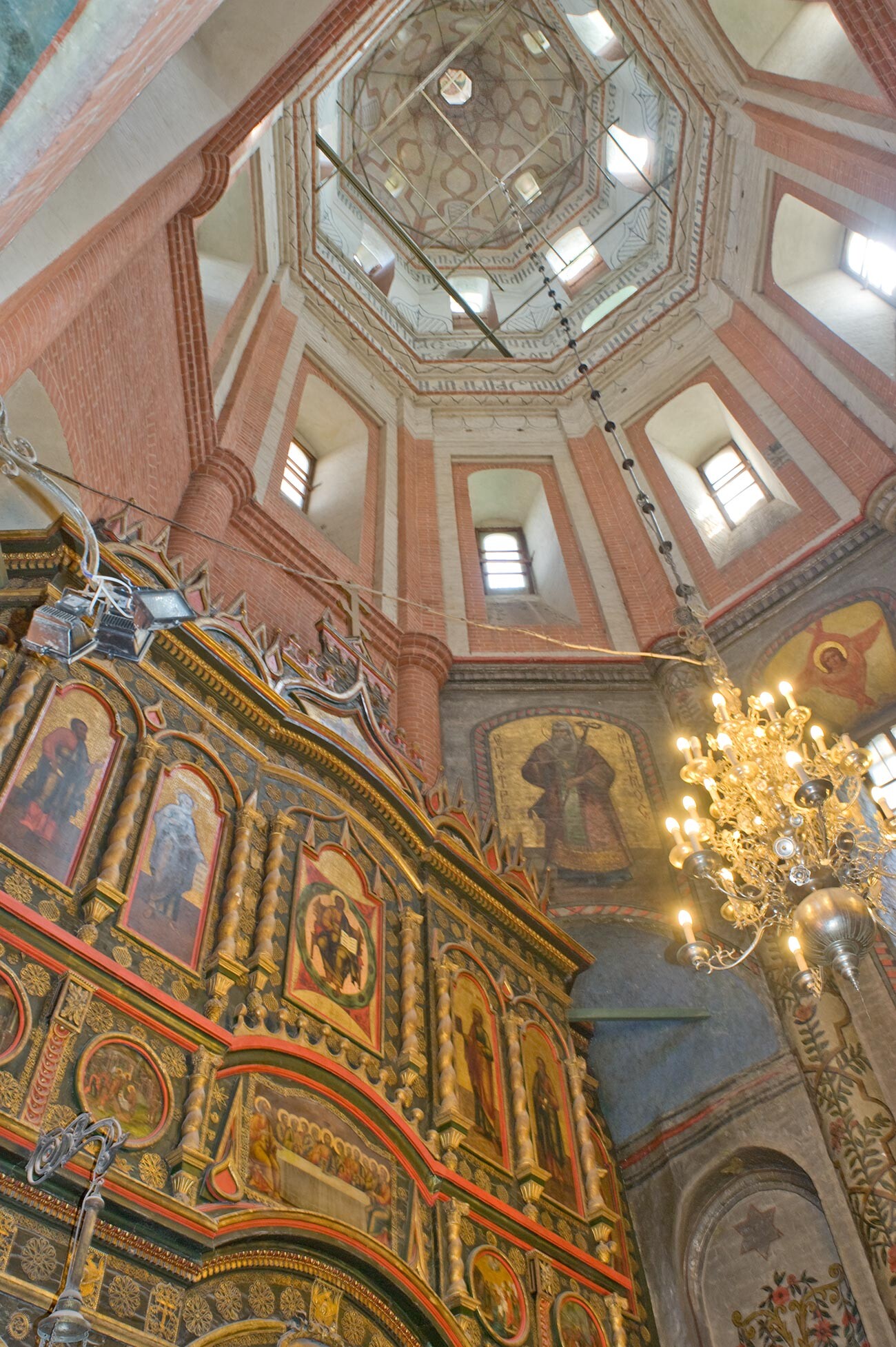 St. Basil's. Interior of Church of the Intercession with icon screen & tower. June 2, 2012

Until the completion in 1600 of the Bell Tower of Ivan the Great, the tower of the central Intercession Church was the highest structure in Moscow – some 200 feet. 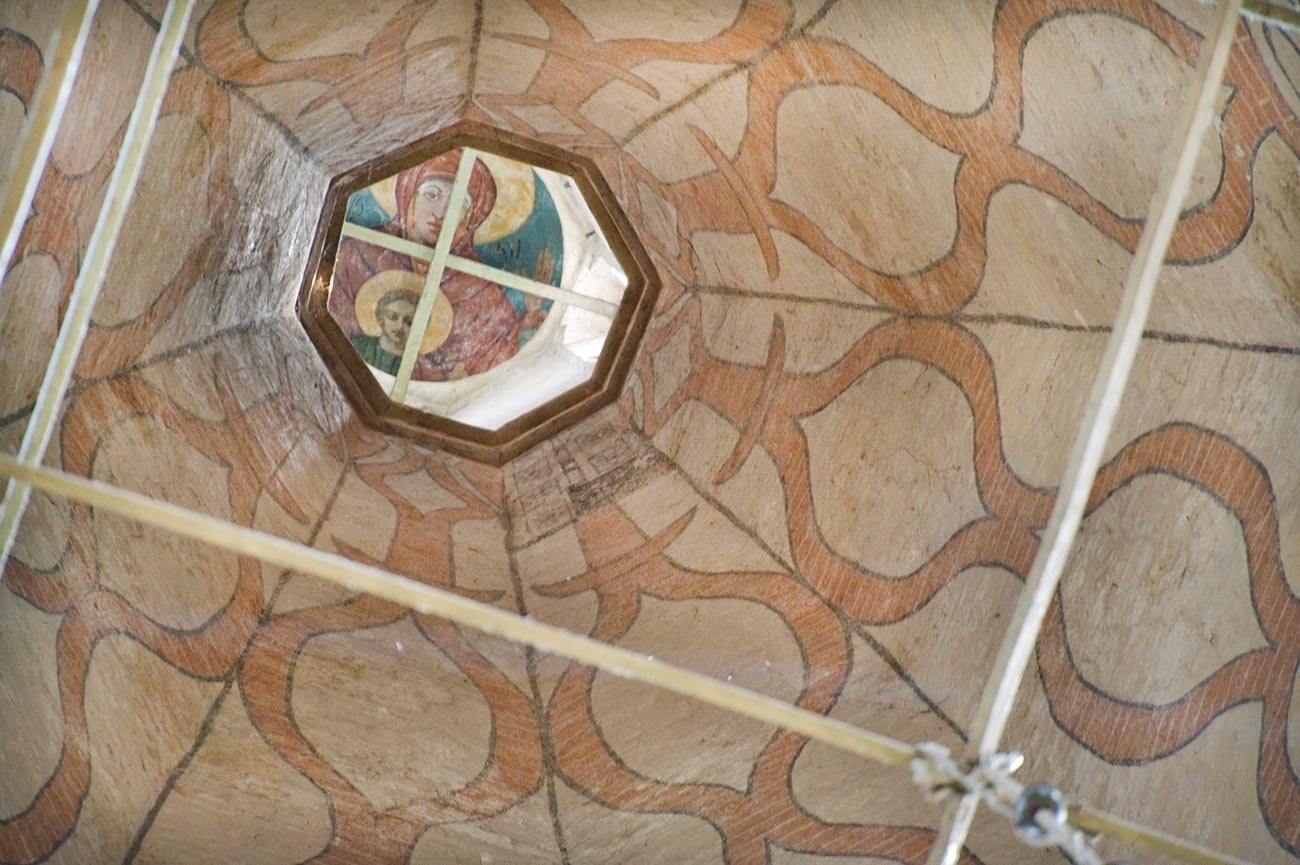 St. Basil's. Interior of Church of the Intercession with painting of Mary & Christ Child on dome at top of tower. June 2, 2012

The Intercession Church tower owes much to the octagonal design of the Kremlin Bell Tower of Ivan the Great and illustrates the fusion of Italian Renaissance and Muscovite design in this most Russian of monuments. The base of the upper tower is in the form of an eight-pointed star that arises from tiers of decorative gables (kokoshniki). 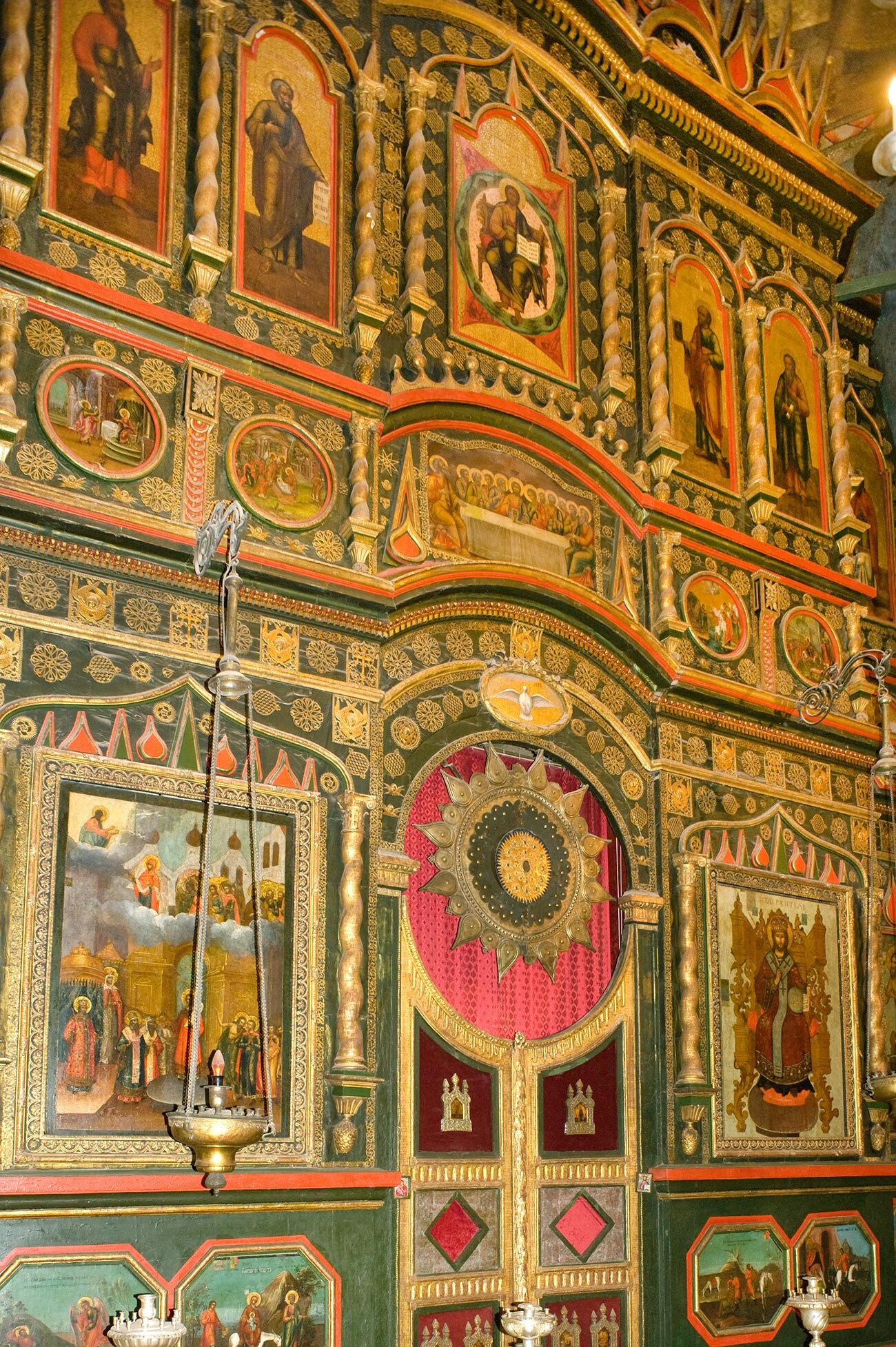 The interior of the Intercession tower (150 feet in height from the floor) displays a decorative geometric pattern revealed during a 1950s restoration of the interior. The tower culminates in a barely visible image of Mary and the Christ Child under the dome. 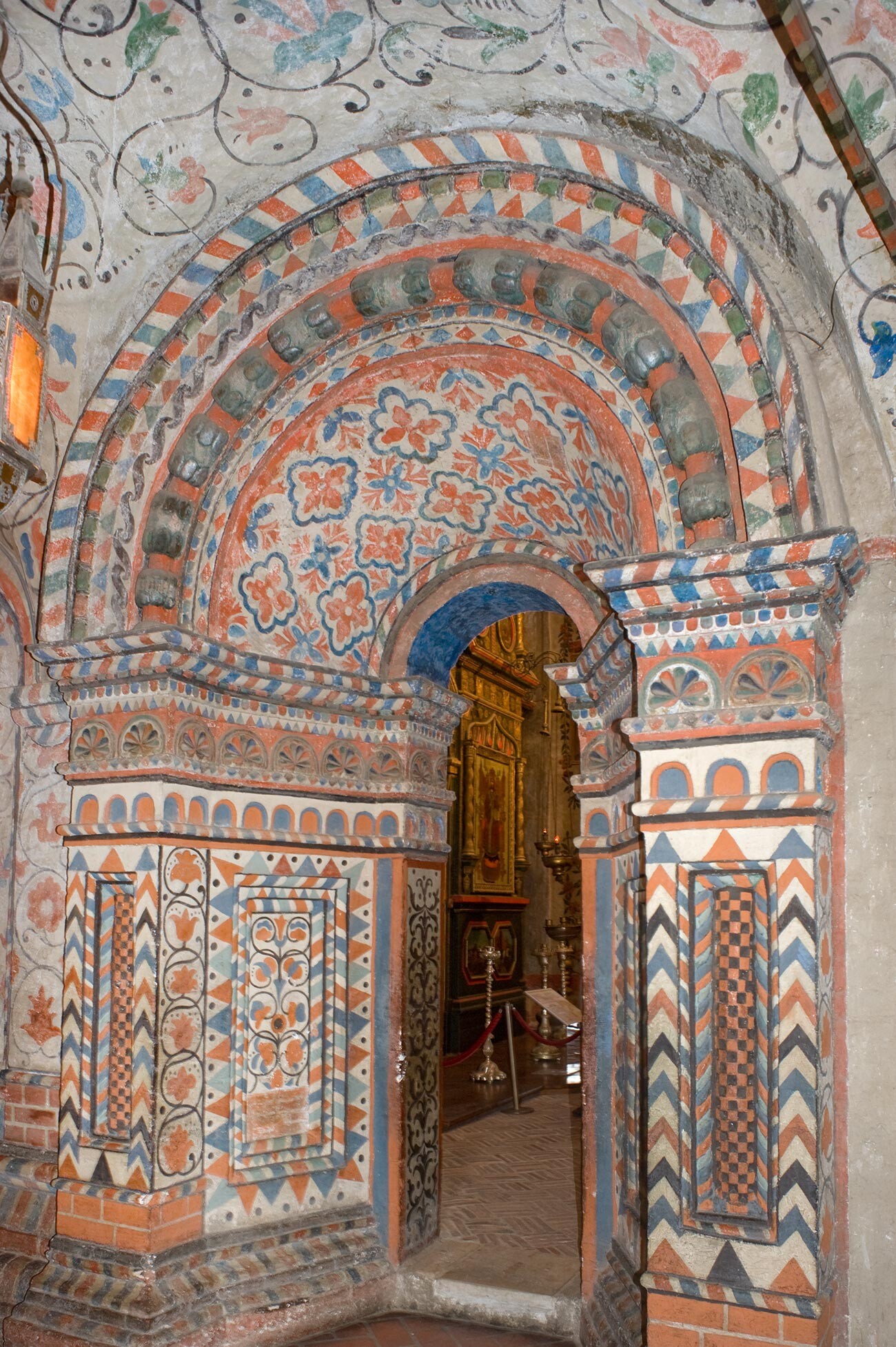 The restoration also uncovered an inscription that proclaimed the dedication of the church on June 29, 1561 in honor of the Holy Trinity and in the presence of the Tsar Ivan IV, the tsareviches Ivan and Fedor, and Metropolitan Macarius. (The surrounding, lesser churches had been consecrated in 1560.) 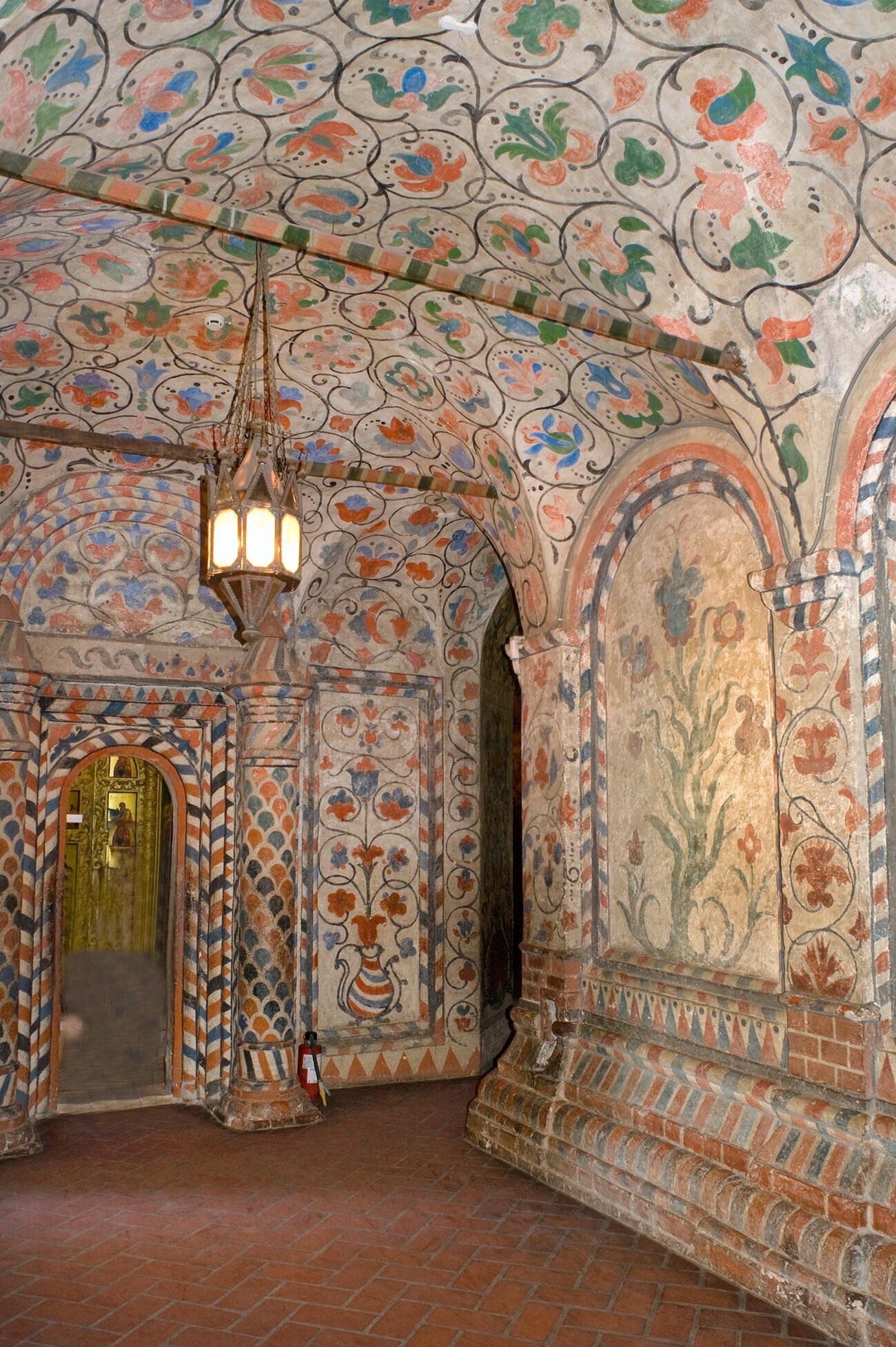 The main visual component of the Intercession church is its icon screen, dating primarily from the 18th and 19th centuries. Most of the icon screen came from a former Kremlin church dedicated to the Chernigov Miracle Workers. 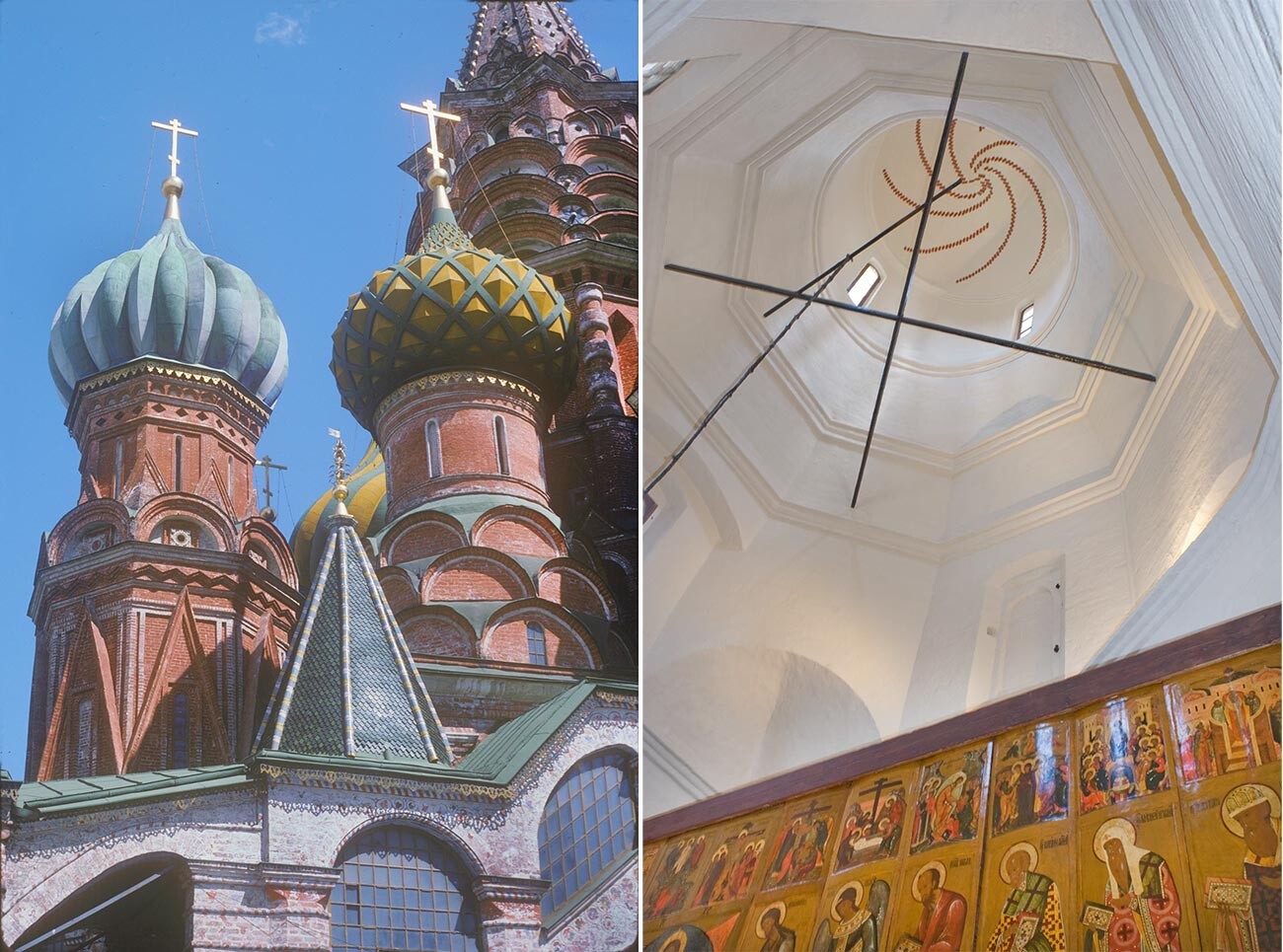 Via the brightly colored north portal is the north passage of the gallery, with its riot of intertwining floral patterns. To the left is the northwest church, dedicated to St. Gregory of Armenia “the Illuminator.” On his feast day, September 30, there were two major events that preceded the storming of Kazan: the defeat of a sortie of enemy troops on the Field of Arsk, and the spectacular explosion of the Arsk Tower, one of the main bastions of the city. 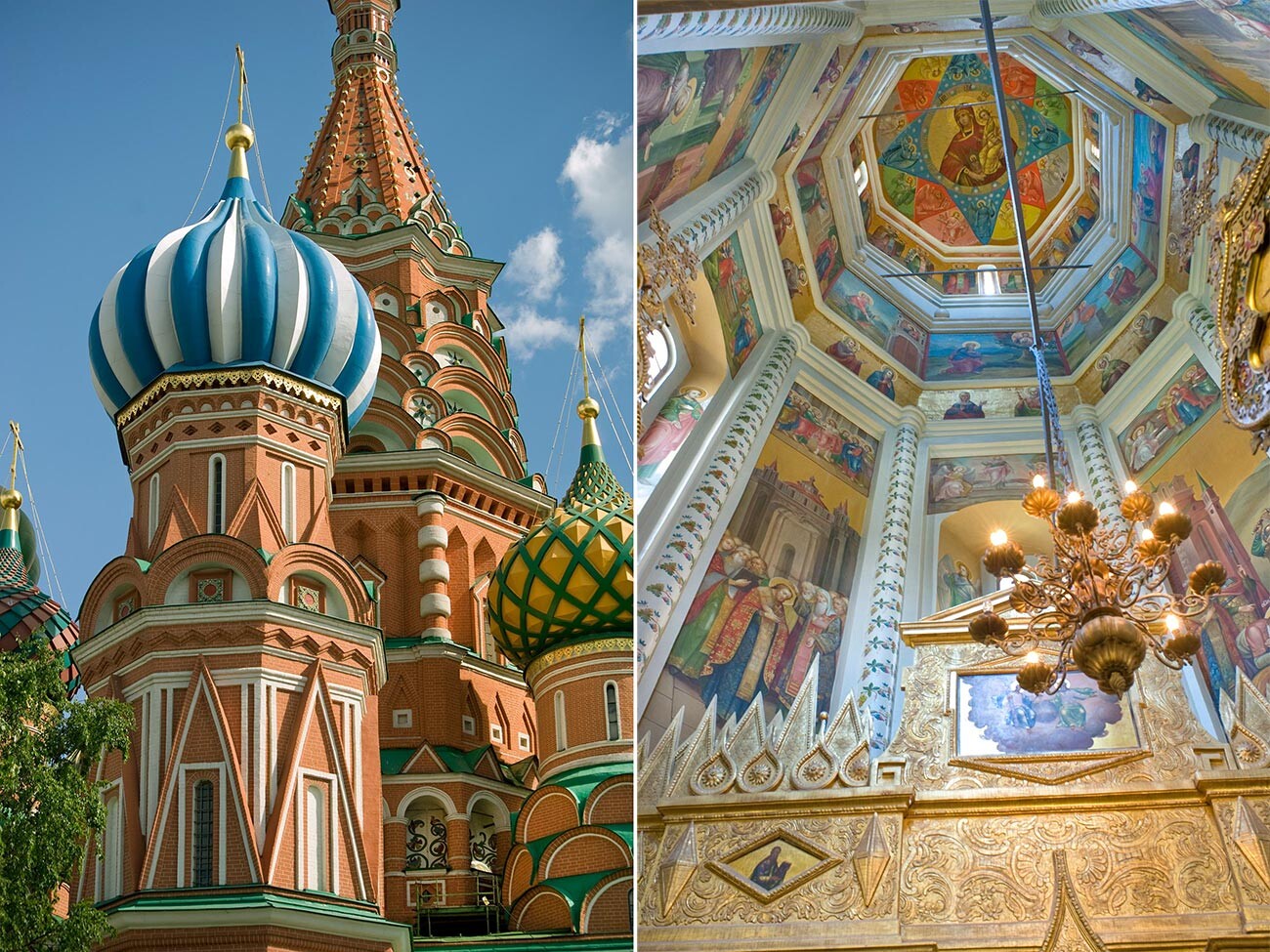 One of the four “minor” towers, the interior of the St. Gregory Church has whitewashed brick walls marked only by a brick spiral on the vaulting beneath the cupola. Its icon screen also includes fragments from small churches formerly located around Red Square. 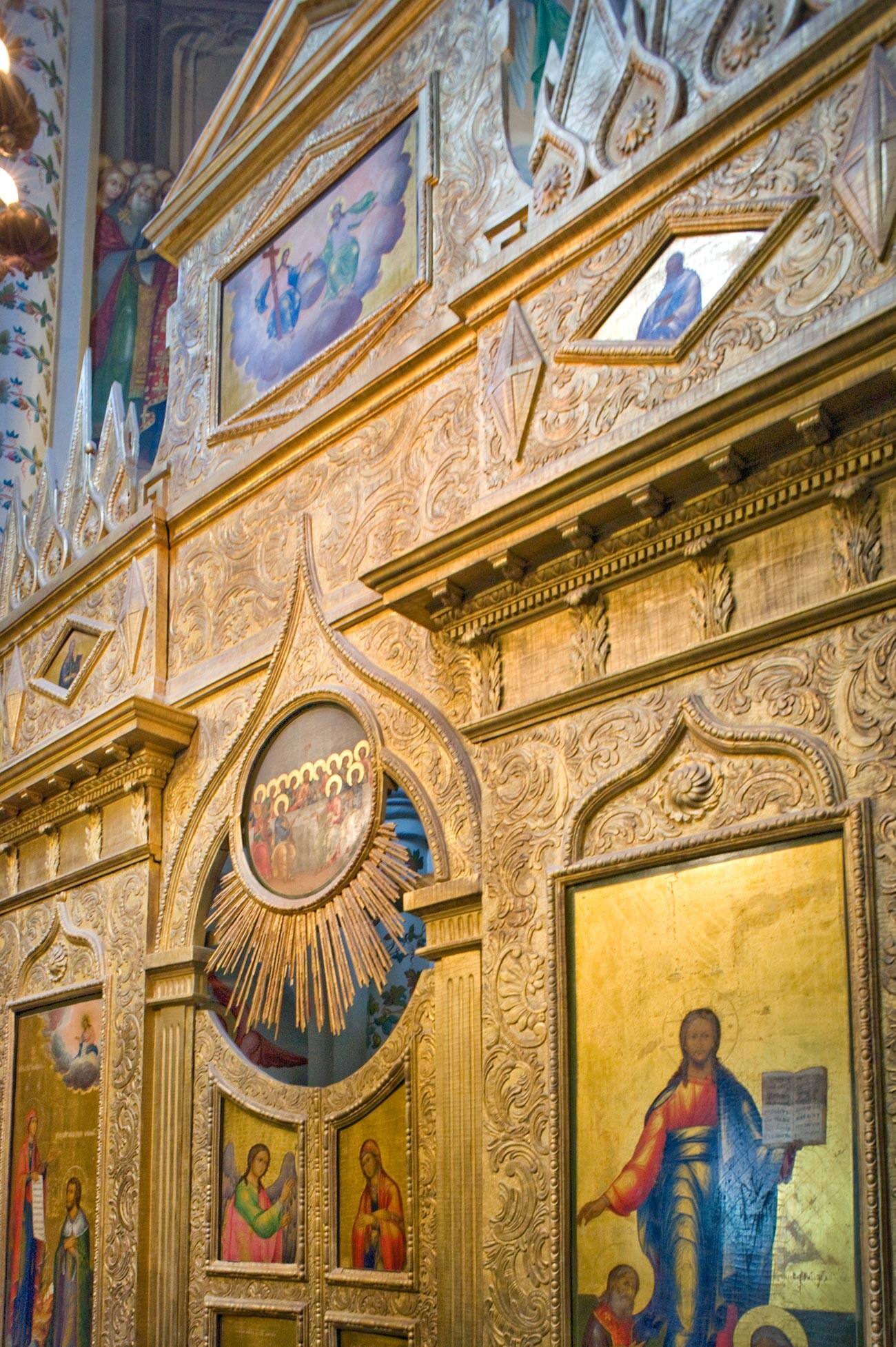 The north tower (a major tower), dedicated to the early Christian martyrs Cyprian and Justina (October 2), commemorates the completion of the conquest of Kazan after the storming of the city the previous day. In the 19th century, the entire interior was covered with bright wall paintings including a majestic image of Mary and the Christ Child in the dome. During the same period, a new icon screen was created in front of the small altar space. 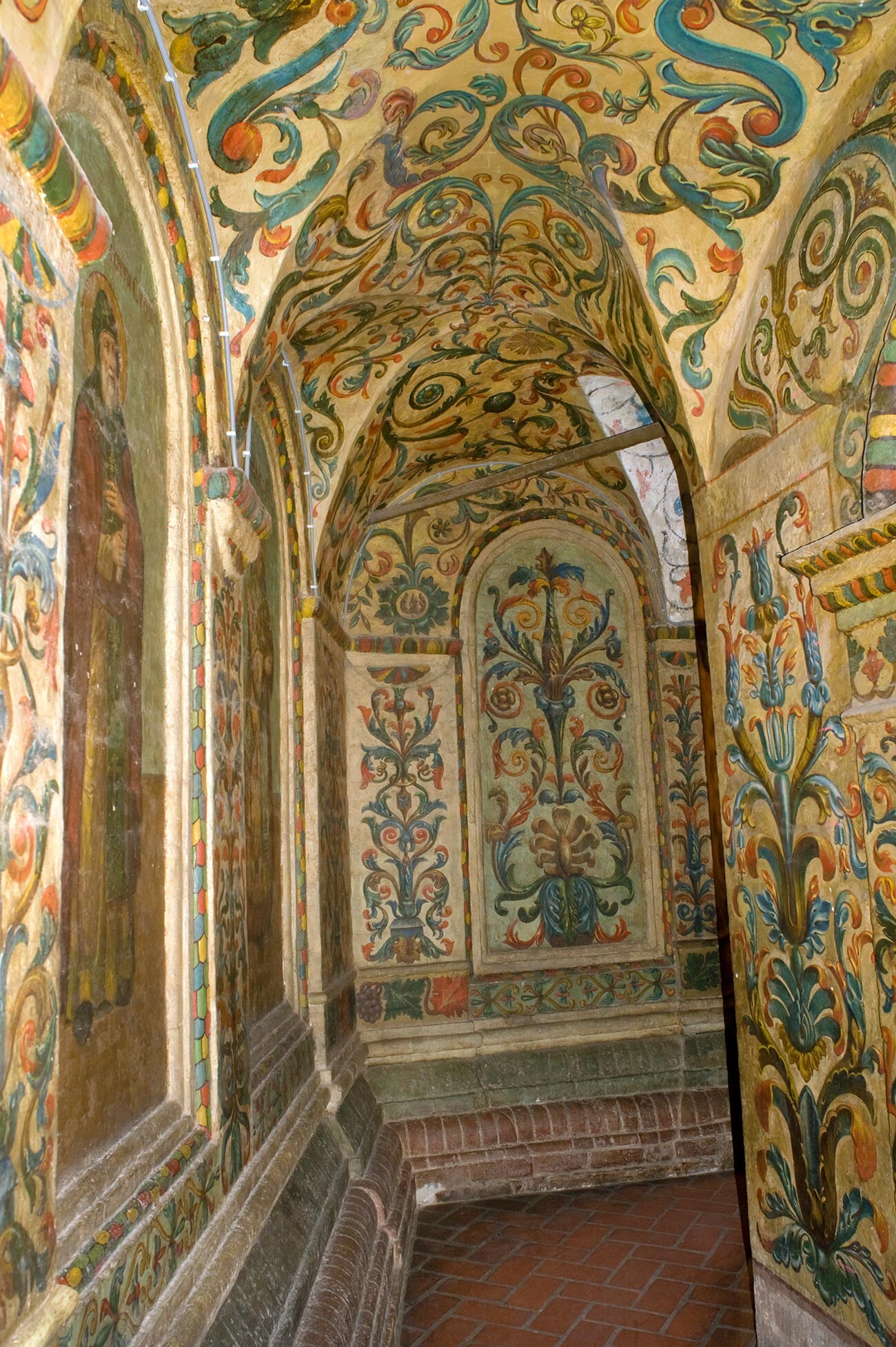 Leaving the north tower, a colorful passage leads to the northeast church (minor), dedicated to three Byzantine patriarchs – Alexander, John and Paul. This church symbolizes the victory on August 30 over the Tatar cavalry led by Prince Epancha, thus eliminating a major threat to Moscow’s hold at the siege of Kazan. Its large icon screen, created specially for the church at the turn of the 19th century, suffered losses in the Soviet period but has now been renovated.

This exploration of the mysteries of the interior of St. Basil’s has moved through five churches, from west to northeast. The following article will explore the remaining five churches, on the south and east sides, including the small but defining church dedicated to Basil the Blessed. 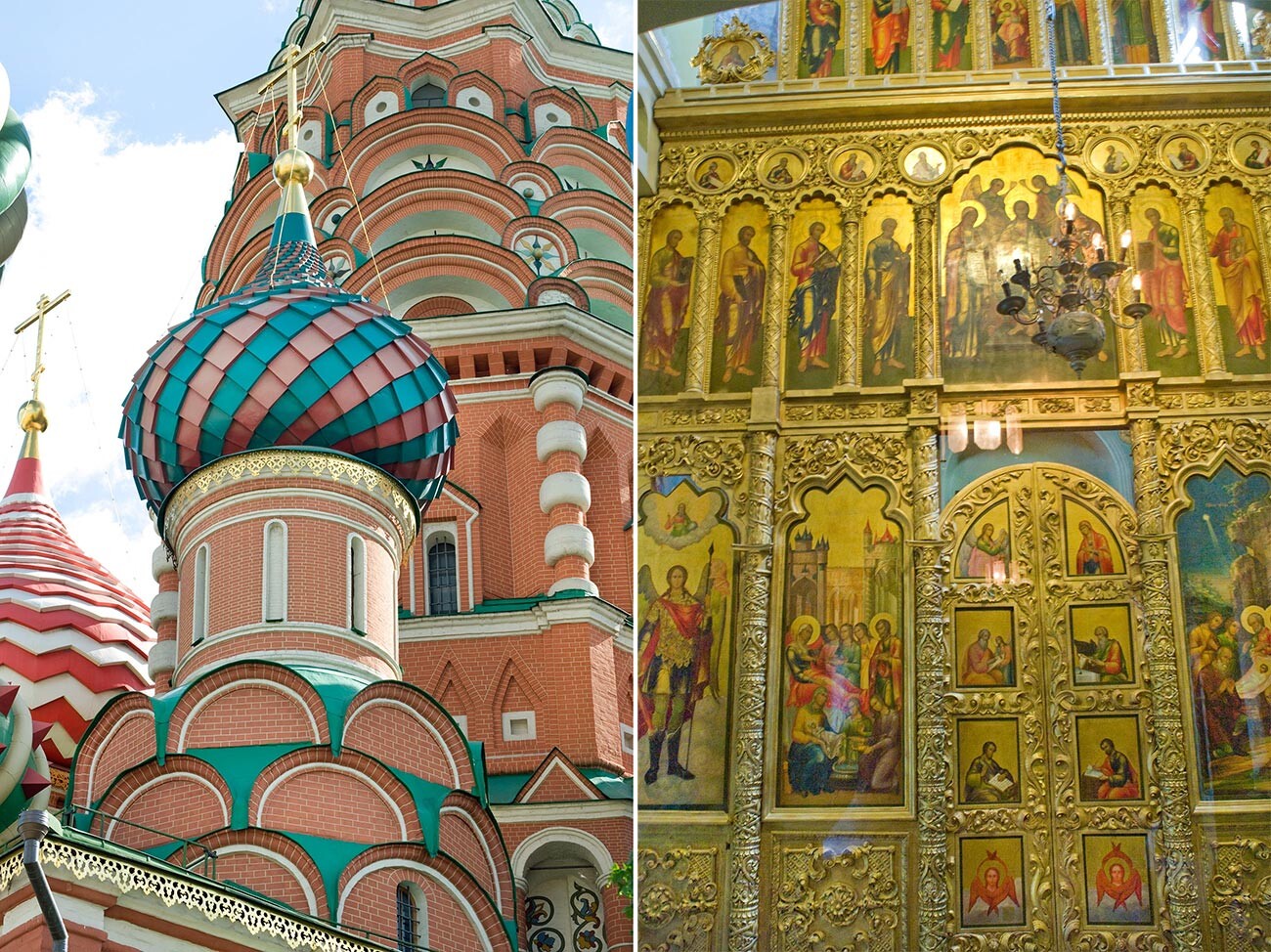 In the early 20th century, the Russian photographer Sergey Prokudin-Gorsky developed a complex process for color photography. Between 1903 and 1916 he traveled through the Russian Empire and took over 2,000 photographs with the process, which involved three exposures on a glass plate. In August 1918, he left Russia and ultimately resettled in France where he was reunited with a large part of his collection of glass negatives, as well as 13 albums of contact prints. After his death in Paris in 1944, his heirs sold the collection to the Library of Congress. In the early 21st century, the library digitized the Prokudin-Gorsky Collection and made it freely available to the global public. A few Russian websites now have versions of the collection. In 1986 the architectural historian and photographer William Brumfield organized the first exhibit of Prokudin-Gorsky photographs at the Library of Congress. Over a period of work in Russia beginning in 1970, Brumfield has photographed most of the sites visited by Prokudin-Gorsky. This series of articles juxtaposes Prokudin-Gorsky’s views of architectural monuments with photographs taken by Brumfield decades later.