The mysteries of St. Basil's on Red Square 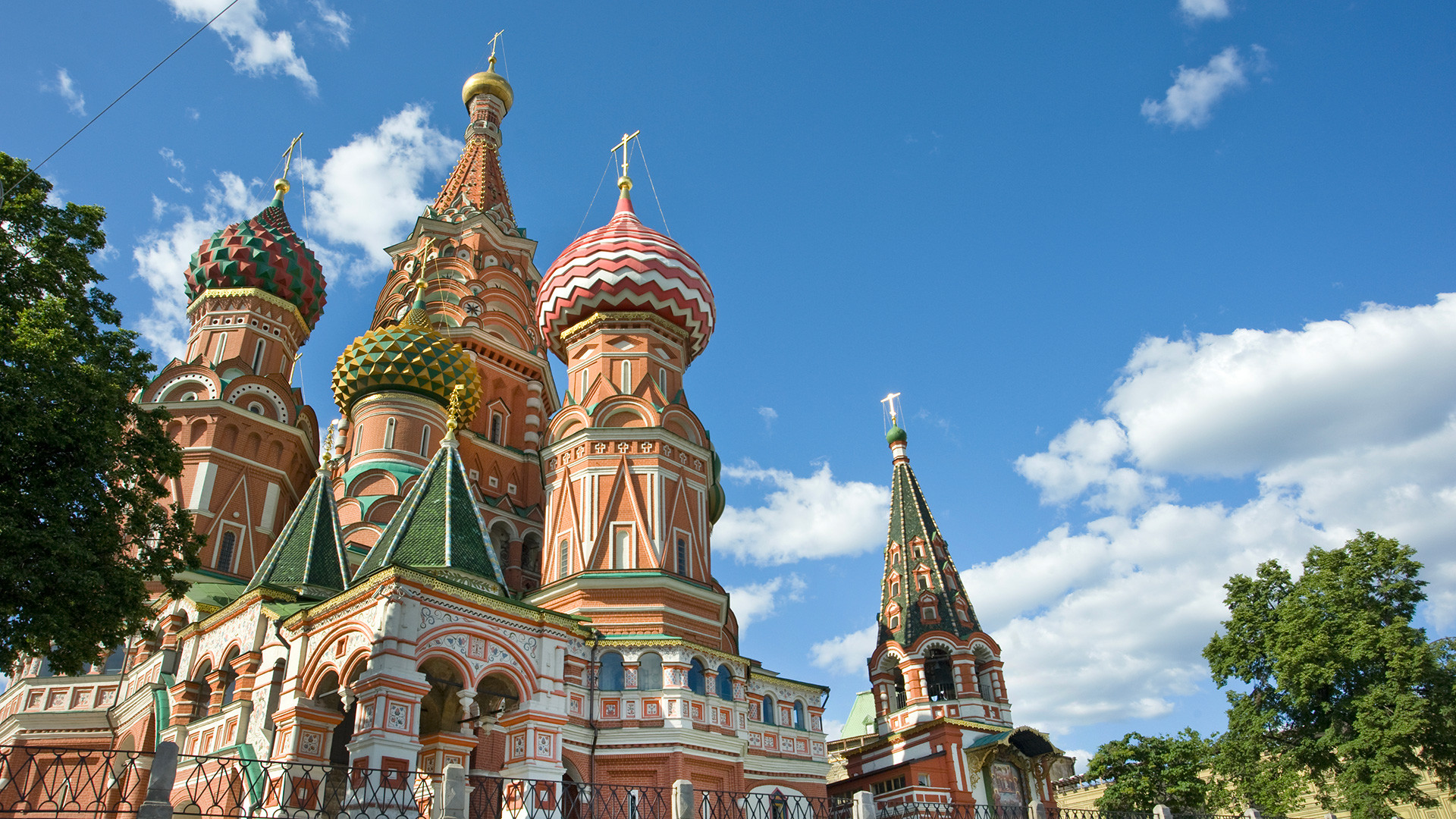 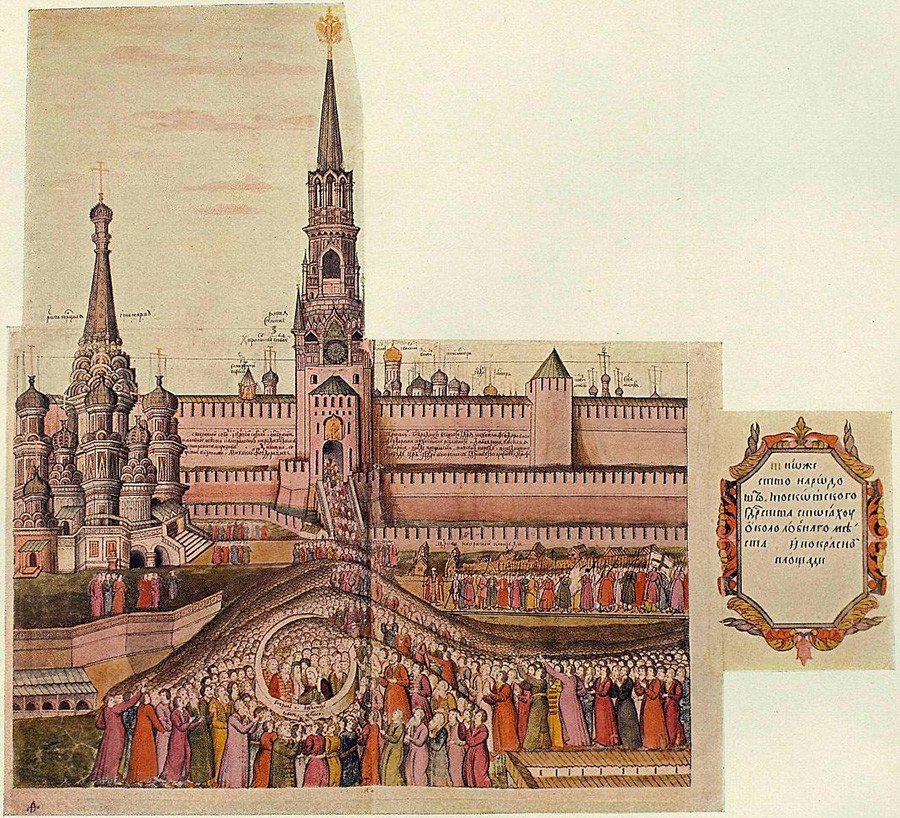 The watercolor purports to show the solemn occasion on February 21, 1613 when the people swore fealty to the newly chosen Tsar Mikhail on Red Square. The details of that event are a matter for historical discussion, and the depiction of the crowd is an imaginative recreation. Nonetheless, the image depicts structures that exist to this day, such as the so-called Lobnoye Mesto, a circular stone platform used for state proclamations. Originally built of brick in the early 16th century, it was rebuilt of limestone in 1599 during the reign of Boris Godunov and renovated in the 18th century. 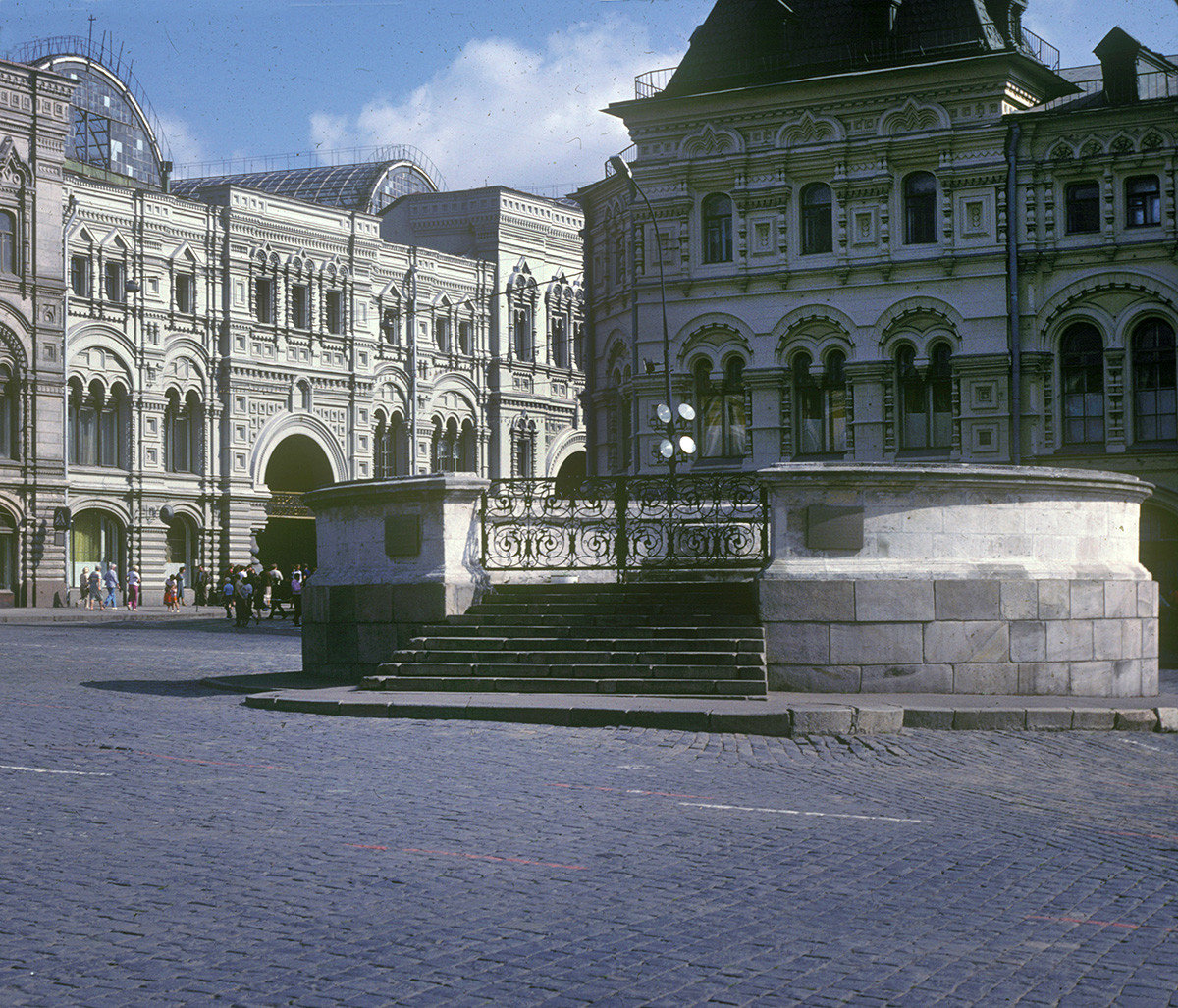 In the background is the Kremlin wall with the elongated Spassky Tower, originally called the Frolov Tower and also referred to as the “Jerusalem Gate” in the 17th century. Erected in 1491 by the Italian architect Pietro Antonio Solari, the massive brick structure served as the base for a fanciful “Gothick” superstructure and clock built in 1625 by the Scottish architect Christopher Galloway. Behind the wall are depictions of the Bell Tower of Ivan the Great and various Kremlin cathedrals. 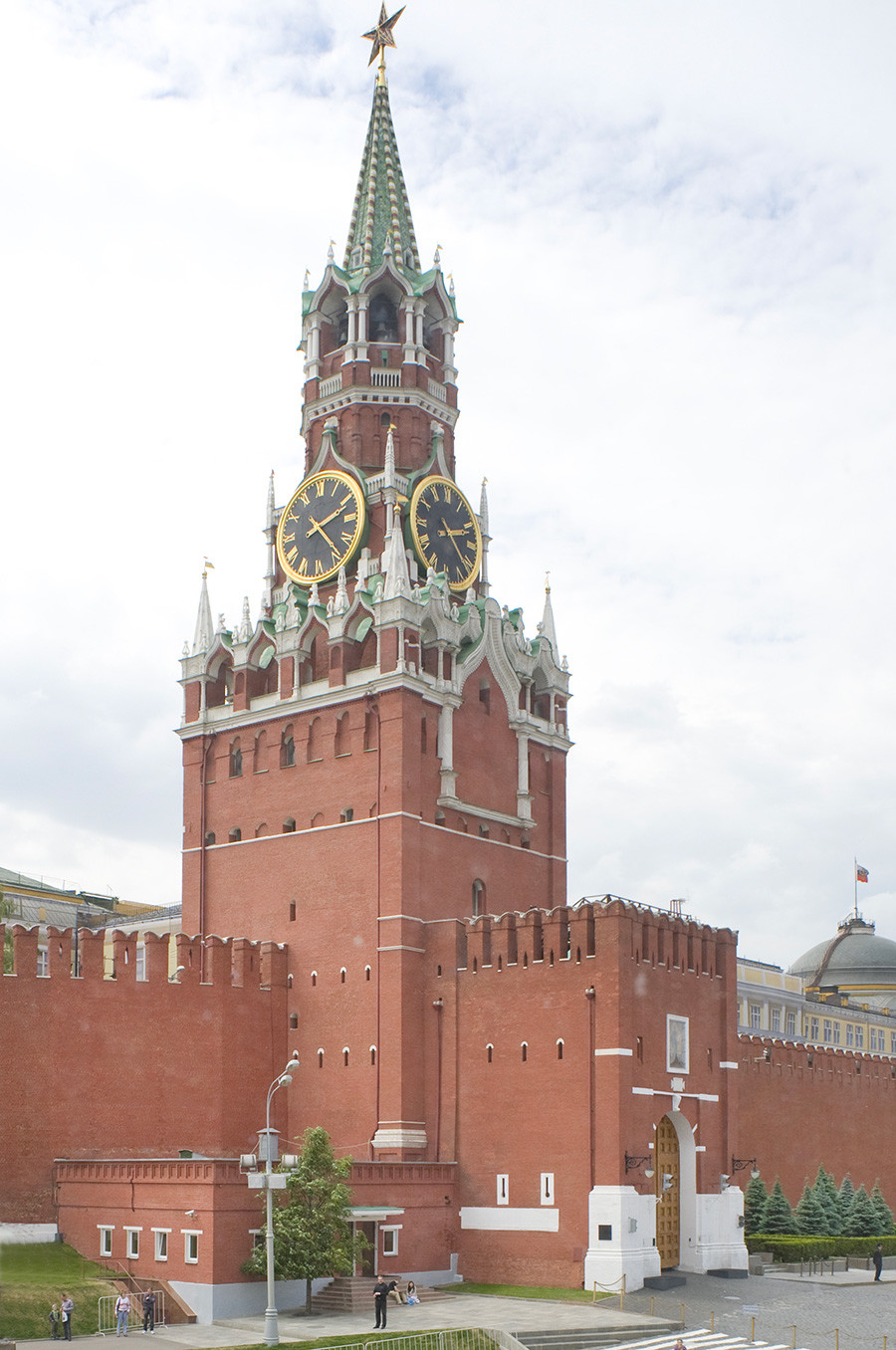 But the main architectural feature of the watercolor is, of course, the multi-domed St. Basil's Cathedral. Despite its fame, the complex structure continues to pose riddles. Even its name varies: from the popularly accepted “St. Basil’s” to its formal designation as the Cathedral of the Intercession on the Moat. In the 17th century it was also referred to as “Jerusalem.” 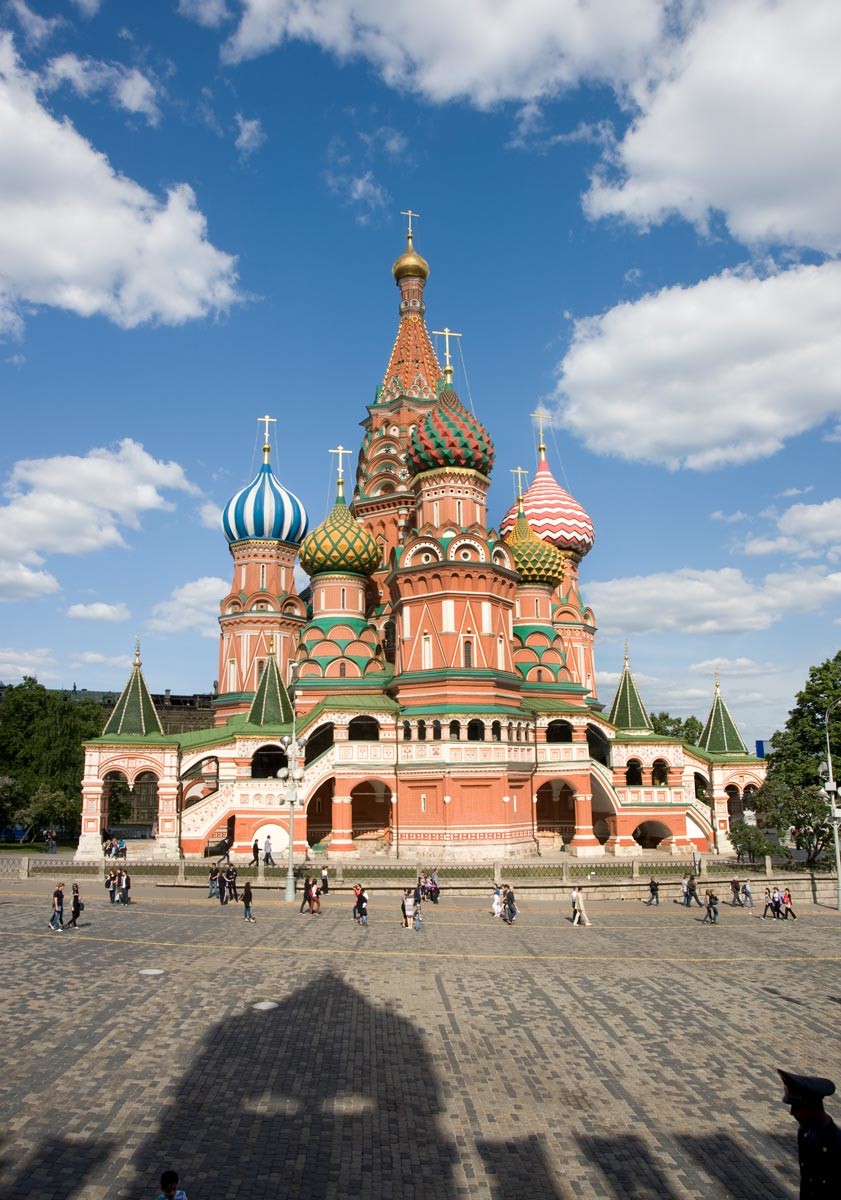 The significance of the temple that epitomizes the extravagance of Muscovite imagination rests on more than its colorful exterior. Its origins are swathed in legend, most of them related to Ivan IV (the Terrible), who commissioned the Intercession Cathedral in 1555 as a commemoration of his taking of the Tatar capital of Kazan in 1552. 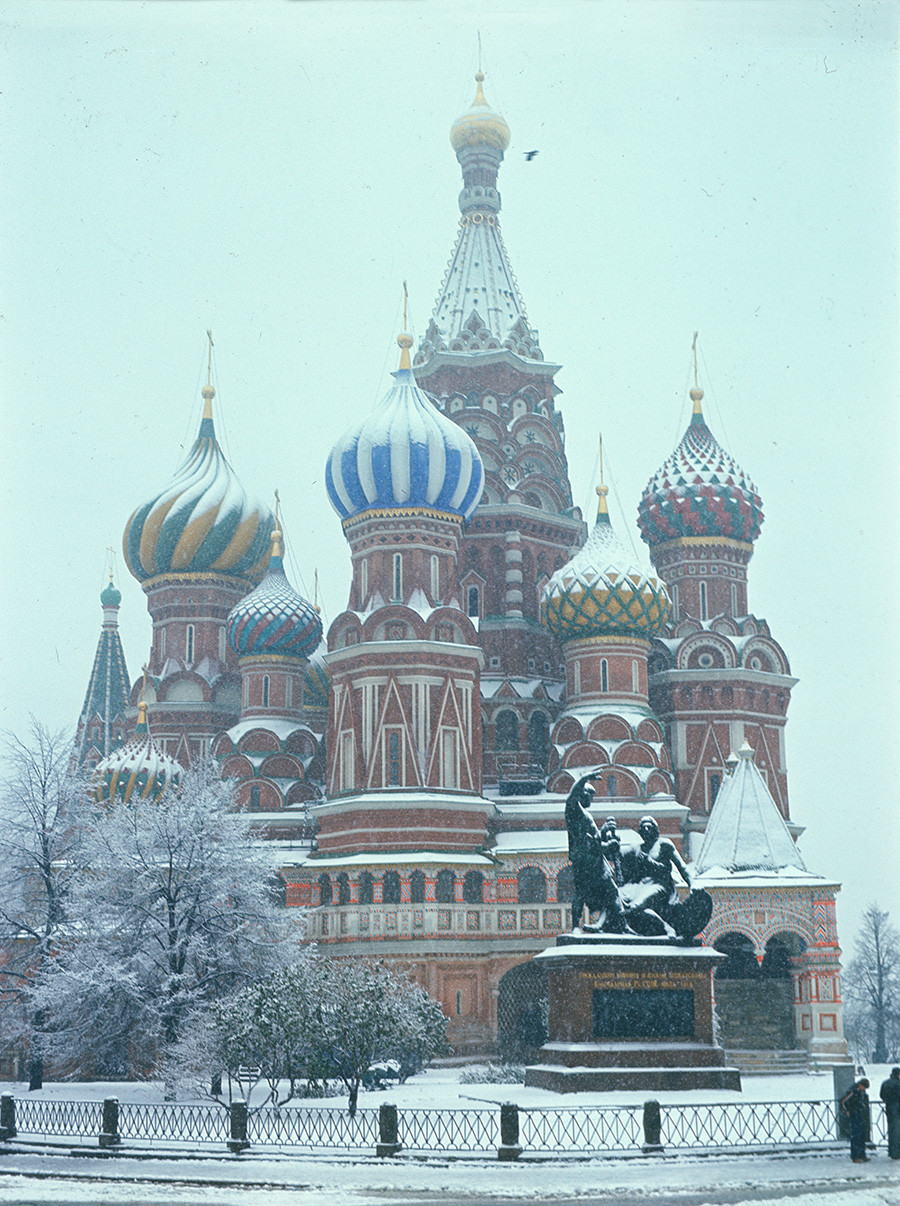 St. Basil's is located on high ground above the left bank of the Moscow River and thereby provides a visual landmark over a large space in the heart of the city. The visibility of the structure was enhanced by its location on the main square, known by the middle of the 17th century as Red (or "beautiful") Square. 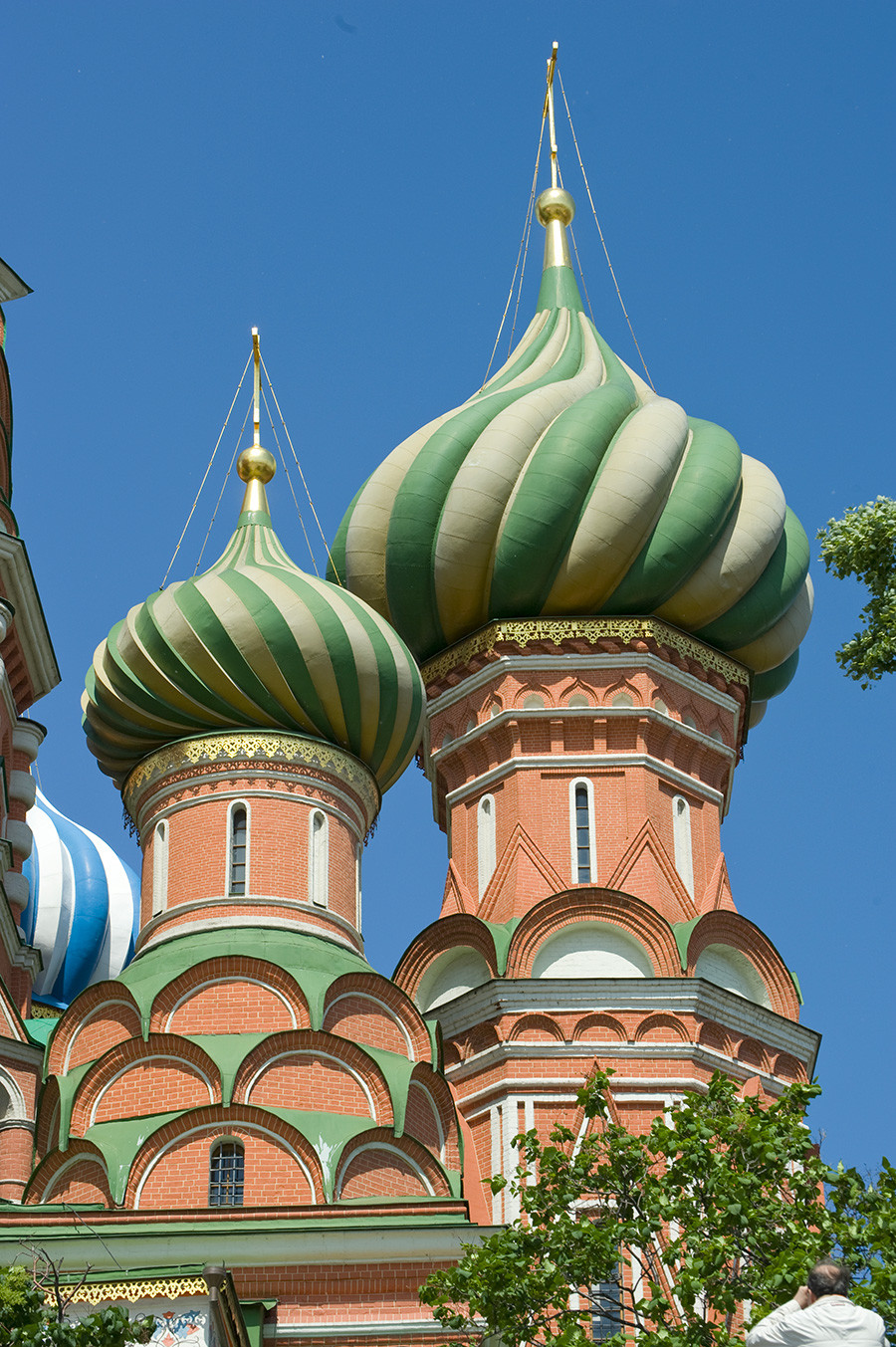 The church accordingly served as a visual and symbolic link between the Kremlin, center of political power, and the posad, the densely settled mercantile area in Kitay-Gorod, where Ivan enjoyed considerable popularity. Although the temple might seem a chaotic agglomeration of parts, its architects — generally known as Barma and Postnik Yakovlev — created a logical plan with a wealth of layered meaning. (Historians still debate the identity of the architects, or whether there was one builder referred to by different names.) 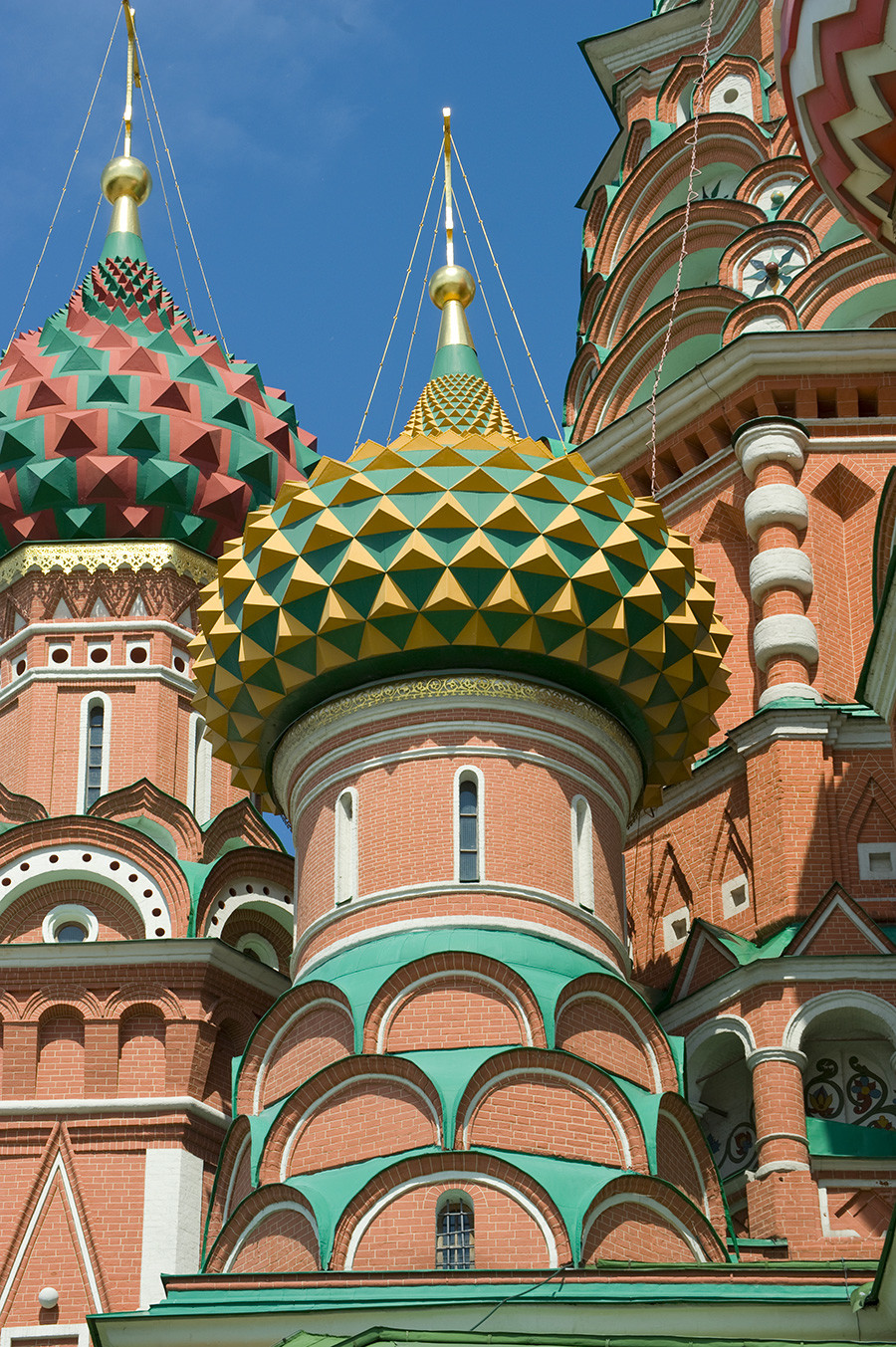 The remaining, smaller churches have a cuboid base (partially obscured by the 17th-century enclosure of the cathedral terrace), with a cupola and round drum raised on three tiers of decorative gables known as kokoshniki. When viewed from the west side, the cathedral and its flanking stairways to the entrance project an imposing design appropriate to the ceremonial functions that culminated on this side, facing one of the main entrances to the Kremlin — the Spassky Tower.

A sense of destiny 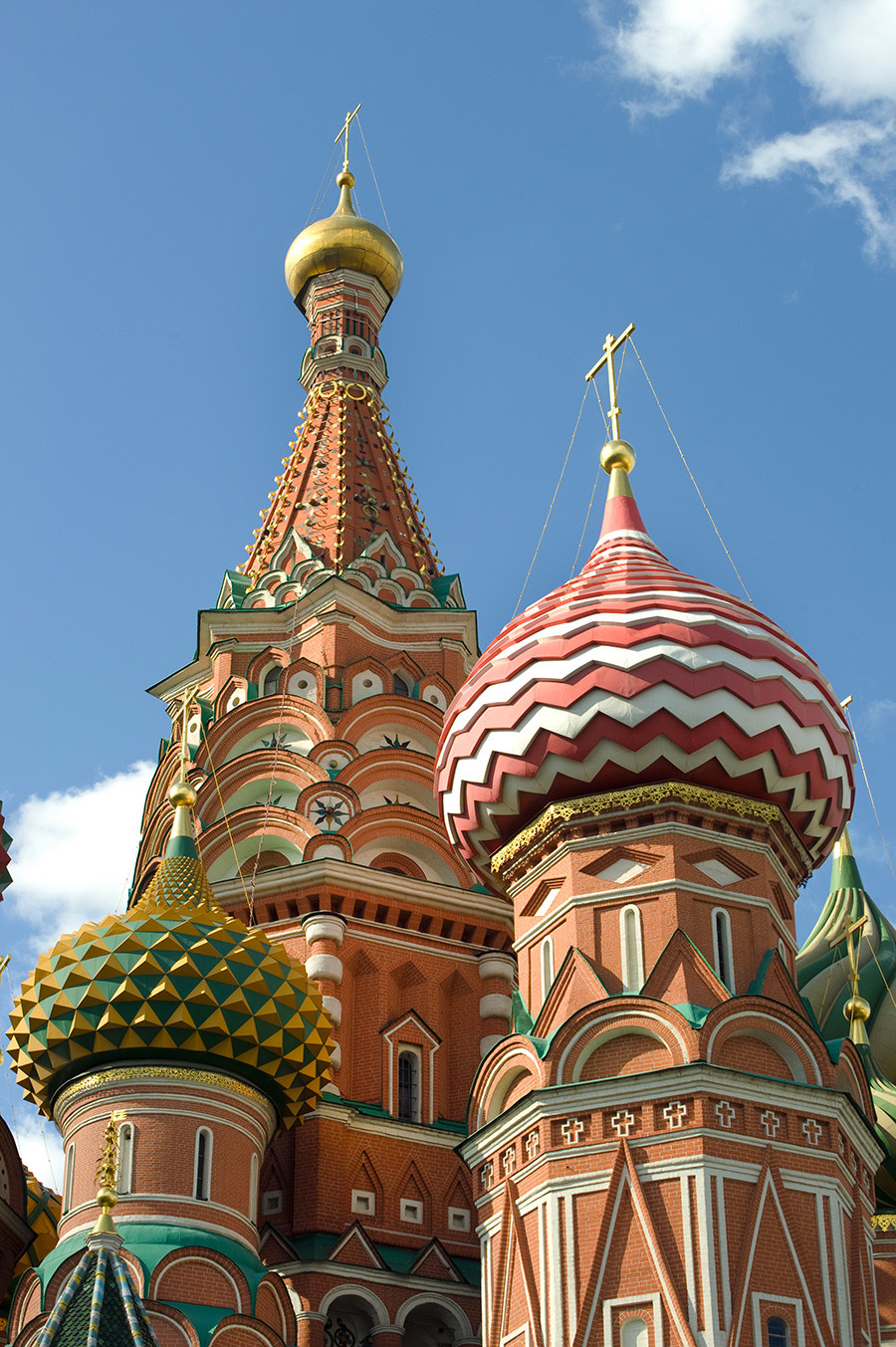 St. Basil's. South view with Church of St. Varlaam Khutinsky (left) & Church of Velikoretsky Icon of St. Nicholas. Background: Tower of Church of the Intercession. May 26, 2012

The origins of the Intercession Cathedral are as complex as its form. Soon after his storm of the city of Kazan on October 1-2, 1552, Ivan commanded that a church dedicated to the Holy Trinity be erected on the square outside the Kremlin at the Frolov Gate.

The brick Church of the Trinity, completed in 1553 and located on a moat in front of the Kremlin, immediately became a popular shrine with attached wooden chapels. (The accrual of chapels around a shrine was a frequent practice in medieval Russian architecture.)

Ivan intended to rebuild the church on a scale reflecting the importance of his defeat of Kazan, which not only eliminated a troublesome relic of Mongol power but also opened a vast area for colonization and trade. And with the conquest in 1554-1556 of the Khanate of Astrakhan, at the mouth of the Volga on the Caspian Sea, one of the most important Eurasian trading arteries became part of Muscovy. 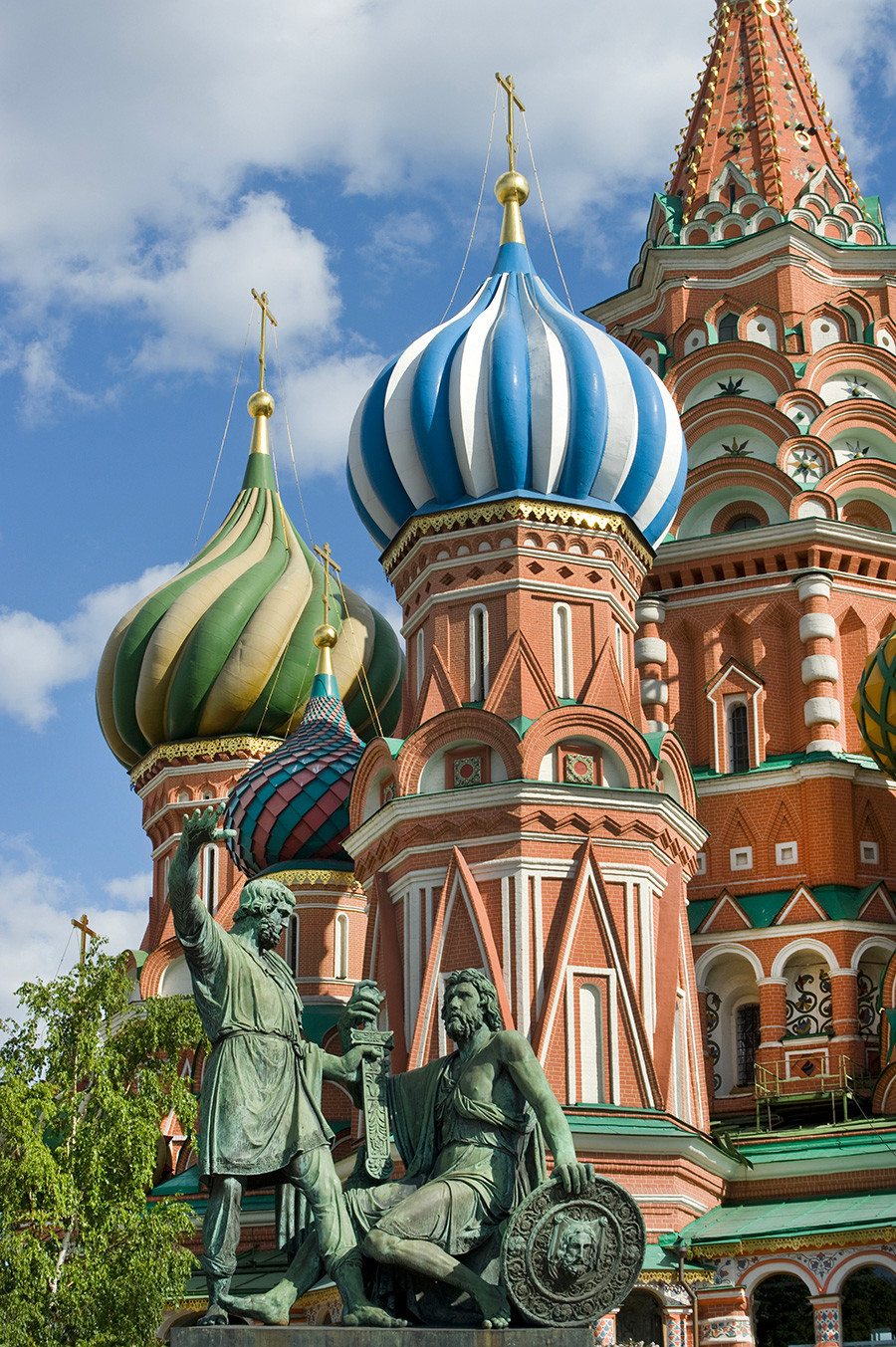 In addition, and more significant from the religious point of view, the subjugation of the eastern Islamic khanates signaled a triumph for Russian Orthodoxy at a time when the church still faced challenges to its wealth, its institutions, and to its dogma. Hence the symbolic dedication of the original church to the Trinity.

The new monument was, therefore, to express the triumph of Orthodoxy and of Muscovy, a dual purpose evident in the fact that the Intercession Cathedral was sponsored by both Metropolitan Macarius and the tsar. Ivan the Terrible's victories were not simply an episode in interminable border warfare, but a defining event in the identity of a nation endowed with a sense of destiny. To celebrate these ideas, each of the components of the Intercession Cathedral was endowed with iconographic and symbolic meanings.

Built to a plan 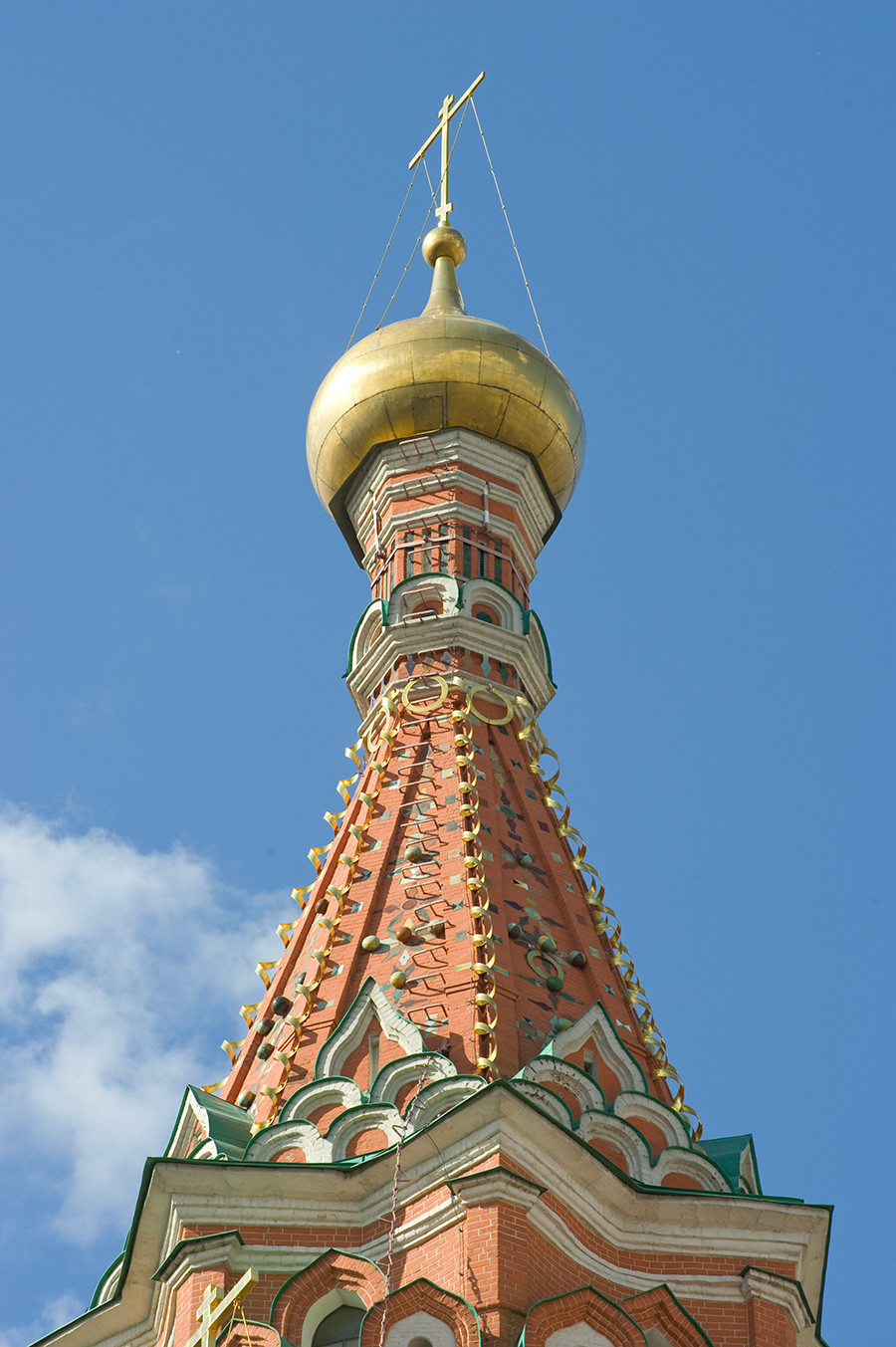 The main axis begins on its eastern end with the church dedicated to the Trinity. The Trinity Church is the holy of holies for the structure by virtue of its dedication to the trinitarian concept, which forms the basis of the numerological system of the cathedral.  Each axis, each diagonal, each side has three towers, whose structure from the terrace level is divided into three parts.

The distinctive onion domes appeared in a restoration of the cathedral in 1586 following damage during the catastrophic Moscow fire of 1583. The original cupolas were apparently lower in shape and made of iron sheets covered with monochromatic tin.

At the center of the main axis is the towering church dedicated to the Intercession of the Virgin, one of the most revered of Russian church holidays, a celebration of the divine protection extended to Russia. The day of its observance, October 1, coincided with the start of the final storming of Kazan. Until the completion in 1600 of the Bell Tower of Ivan the Great, the tower of the central Intercession Church was the highest structure in Moscow at 200 feet. 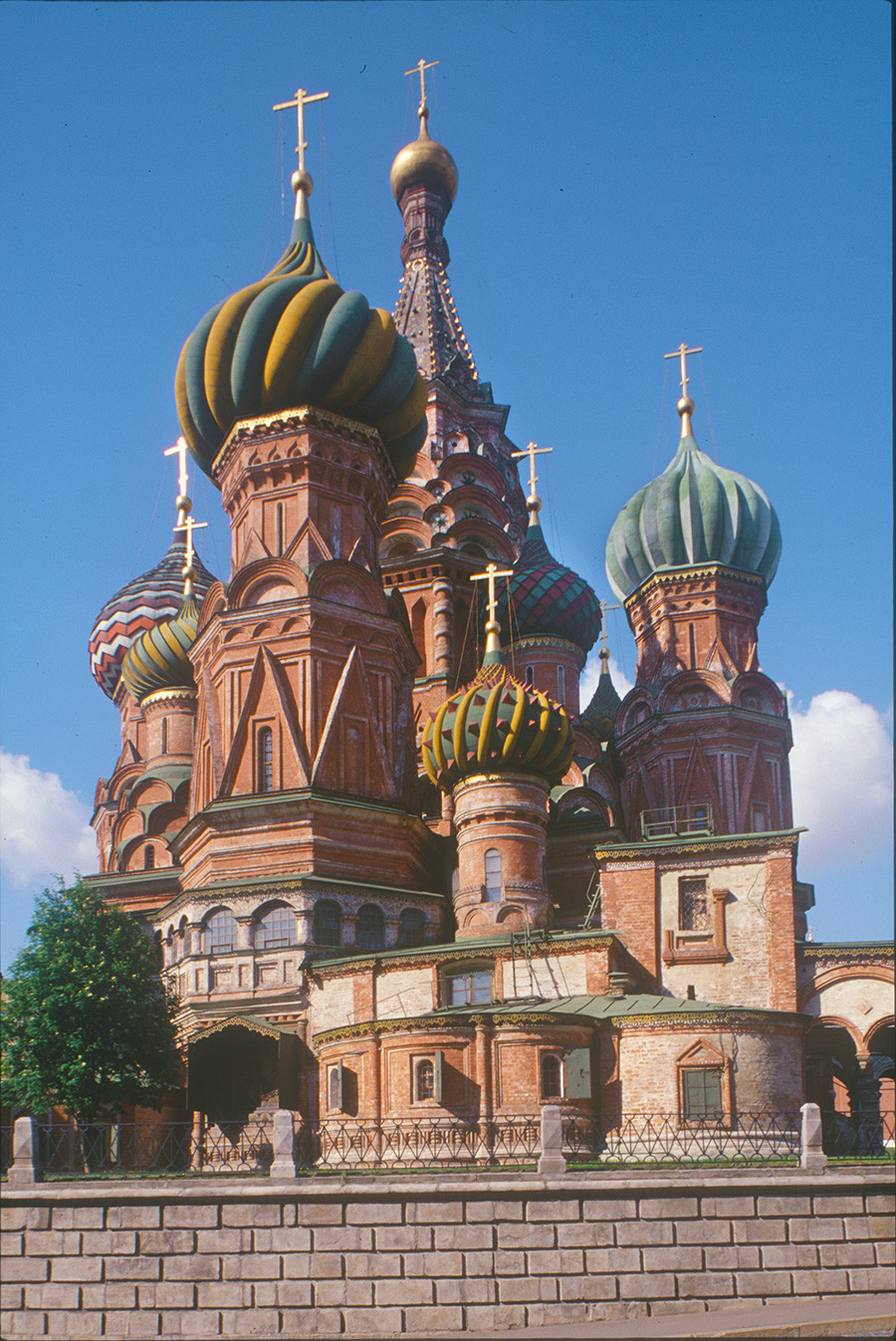 The Intercession Church tower owes much to the octagonal design of the Kremlin bell tower and illustrates the fusion of Italian Renaissance and Muscovite design in this most Russian of monuments. The base of this upper tower is in the form of an eight-pointed star that arises from tiers of decorative gables (kokoshniki). The decoration of the soaring “tent” of the tower is a combination of glazed terracotta ornaments and gilded, twisted metallic strips ascending the eight ribs of the tower. 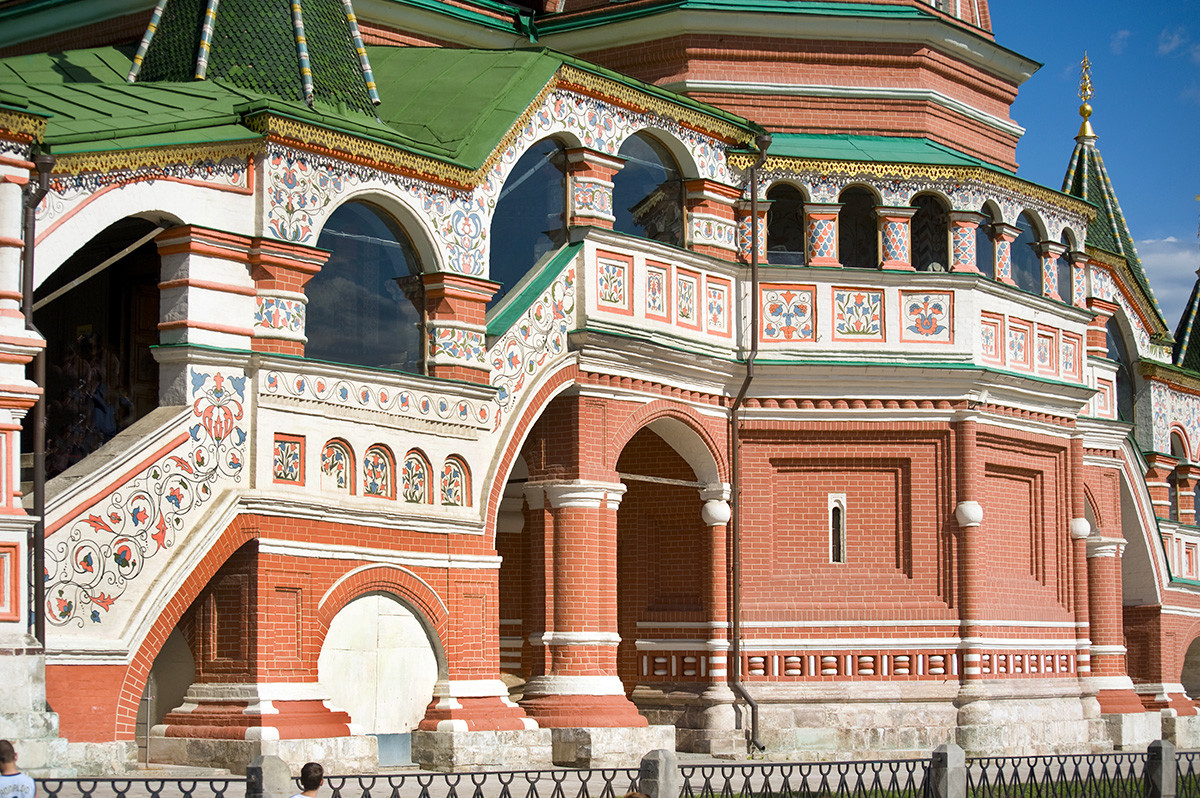 There are many other levels of meaning within the ensemble of towers known as St. Basil’s. Most notable is the dedication to Basil, a saintly “fool in Christ” revered by Muscovites. the popular name of the temple. Basil the Blessed (1469-1552) was a Muscovite yurodivy — or "fool in Christ” — revered by the tsar himself as well as by the common people for his saintliness, his gift of prophecy, and his courage. 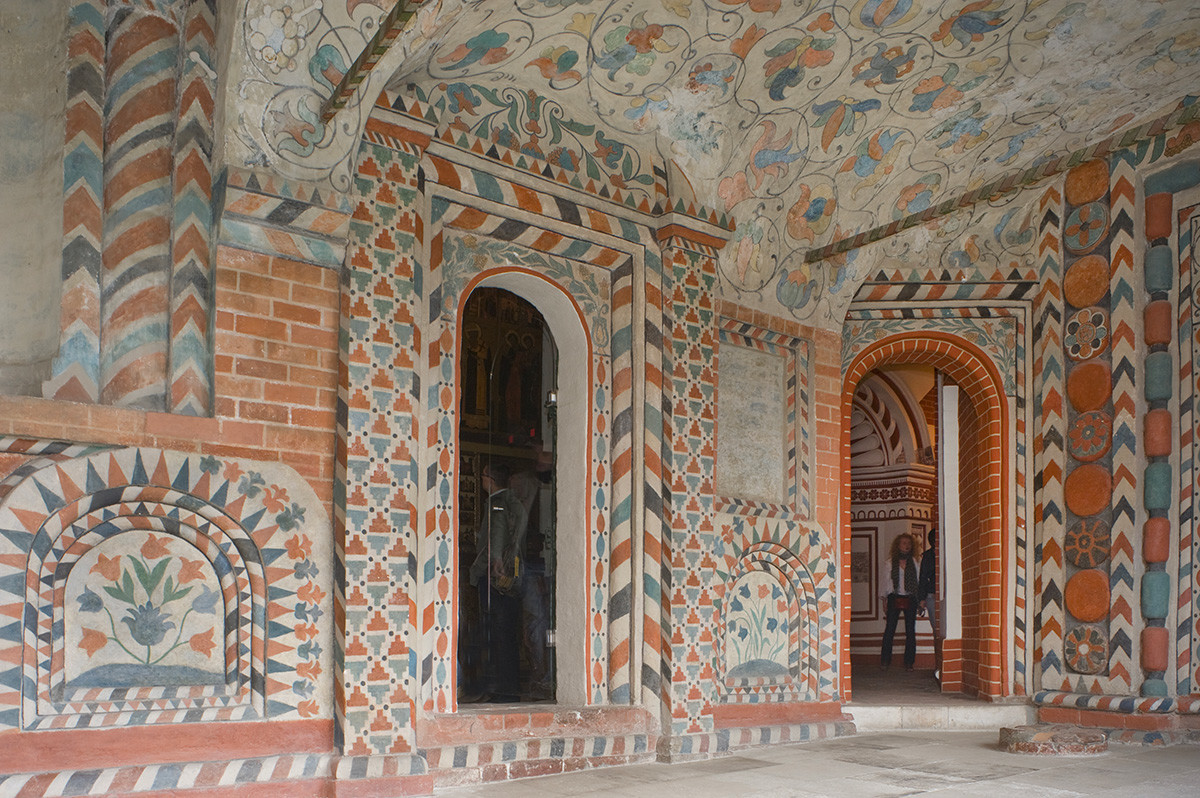 By coincidence Basil, or Vasily, died in the year of the taking of Kazan, and a wooden shrine in his honor was erected to the east of the original Trinity Church. The shrine was maintained during the building of the Intercession Cathedral, and in 1588 it was replaced at the northeast corner of the cathedral with the small brick church dedicated to Basil the Blessed. Despite the modest size of the church, the cult of Basil grew to such proportions that it usurped the cathedral's other designations, official or unofficial. 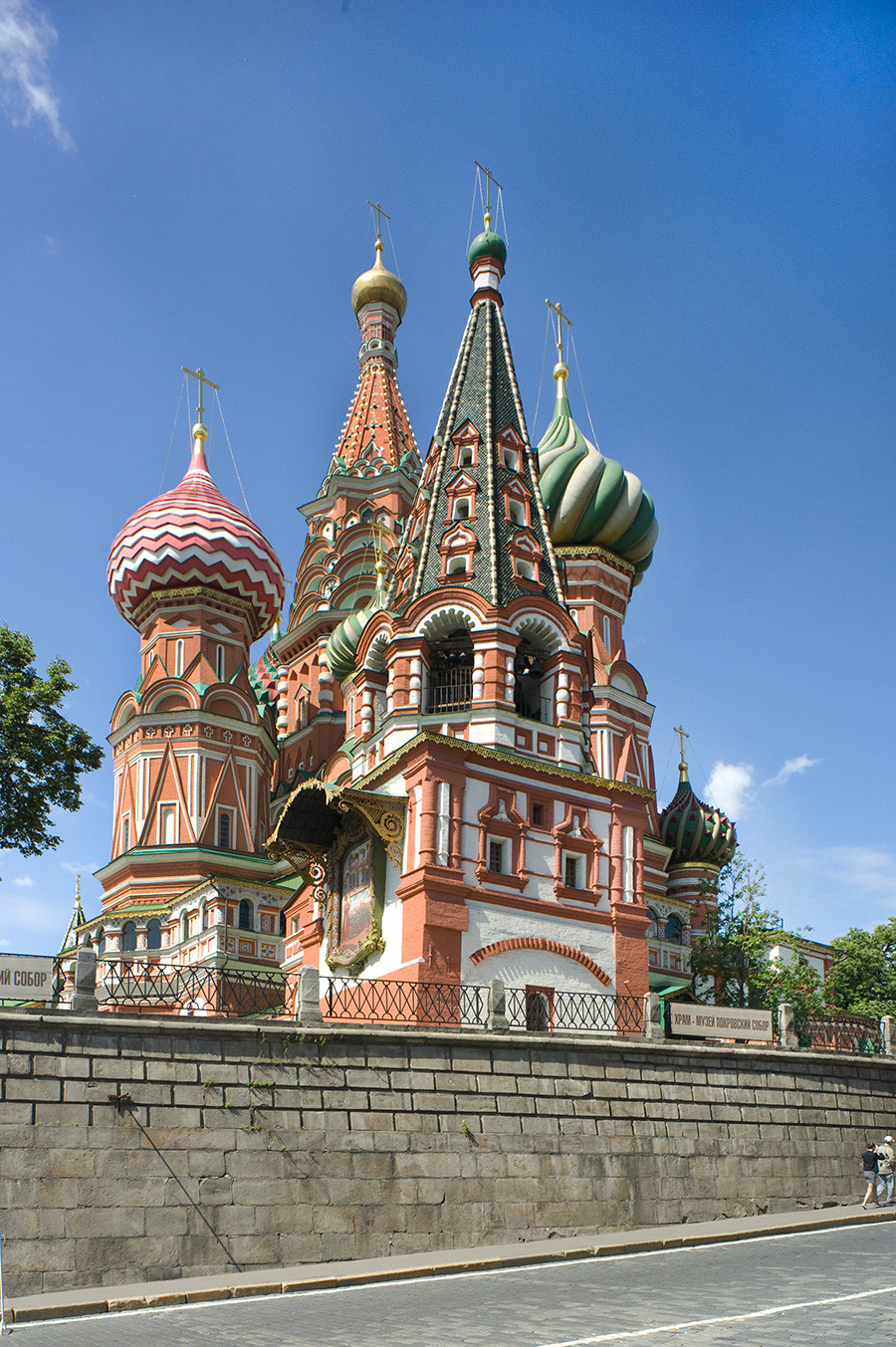 The expansion of the Cathedral of the Intercession continued in the 17th century with the enclosure of the terrace around the ensemble. Around 1680, the free-standing bell tower at the southeast corner of the cathedral was reconstructed in a 17th-century ornamental style, with polychromatic decoration and a spire of ceramic tile. Much of the painted ornamentation on the exterior walls, particularly of the new gallery, was also added in the latter part of the 17th century. The cupolas were brightly painted in a renovation of the cathedral during the 1780s.

As the major cathedral in one of the most populous sections of Moscow, the Intercession Cathedral — or the Temple of Basil the Blessed — has stood like a massive outcropping swept by waves of rebuilding and retaining some of the modifications, but never losing the form that celebrated the rise of Muscovy — and Russia itself. 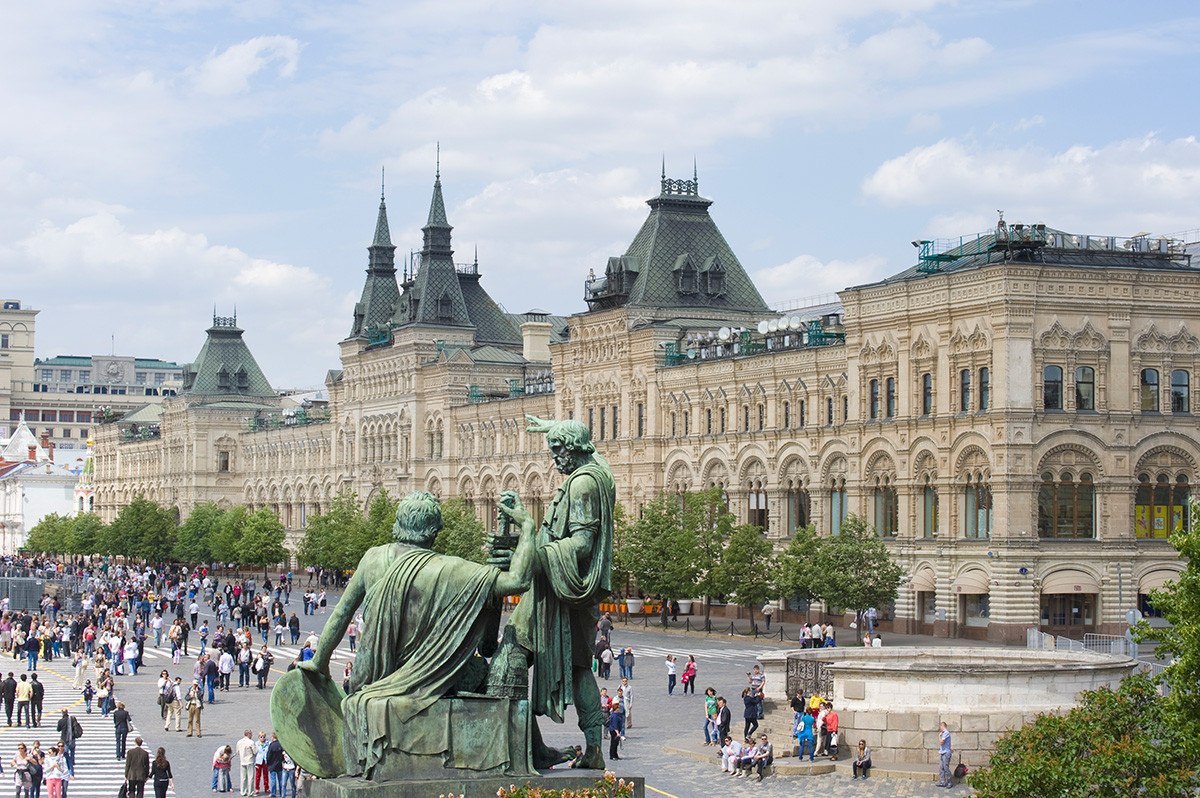