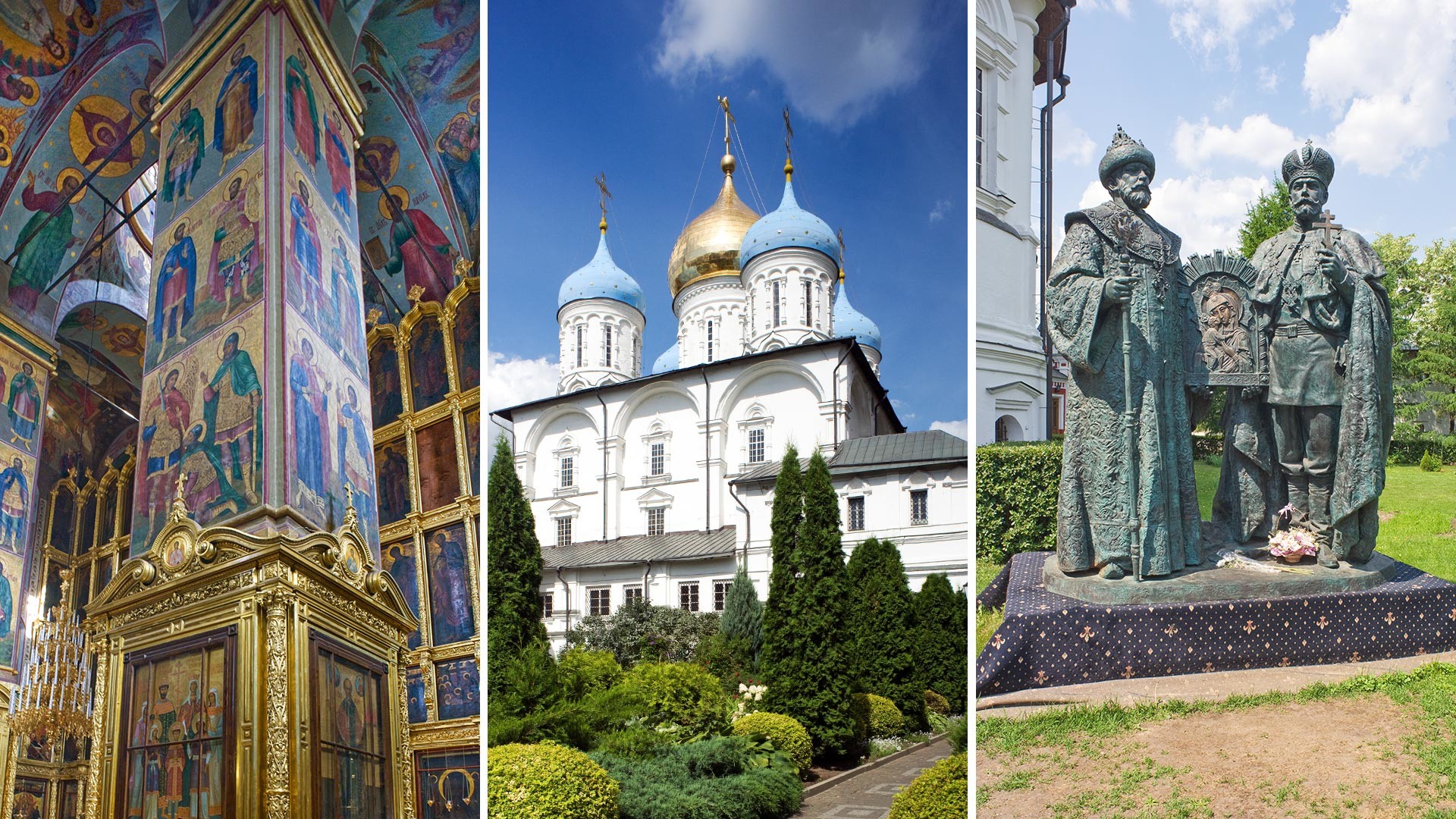 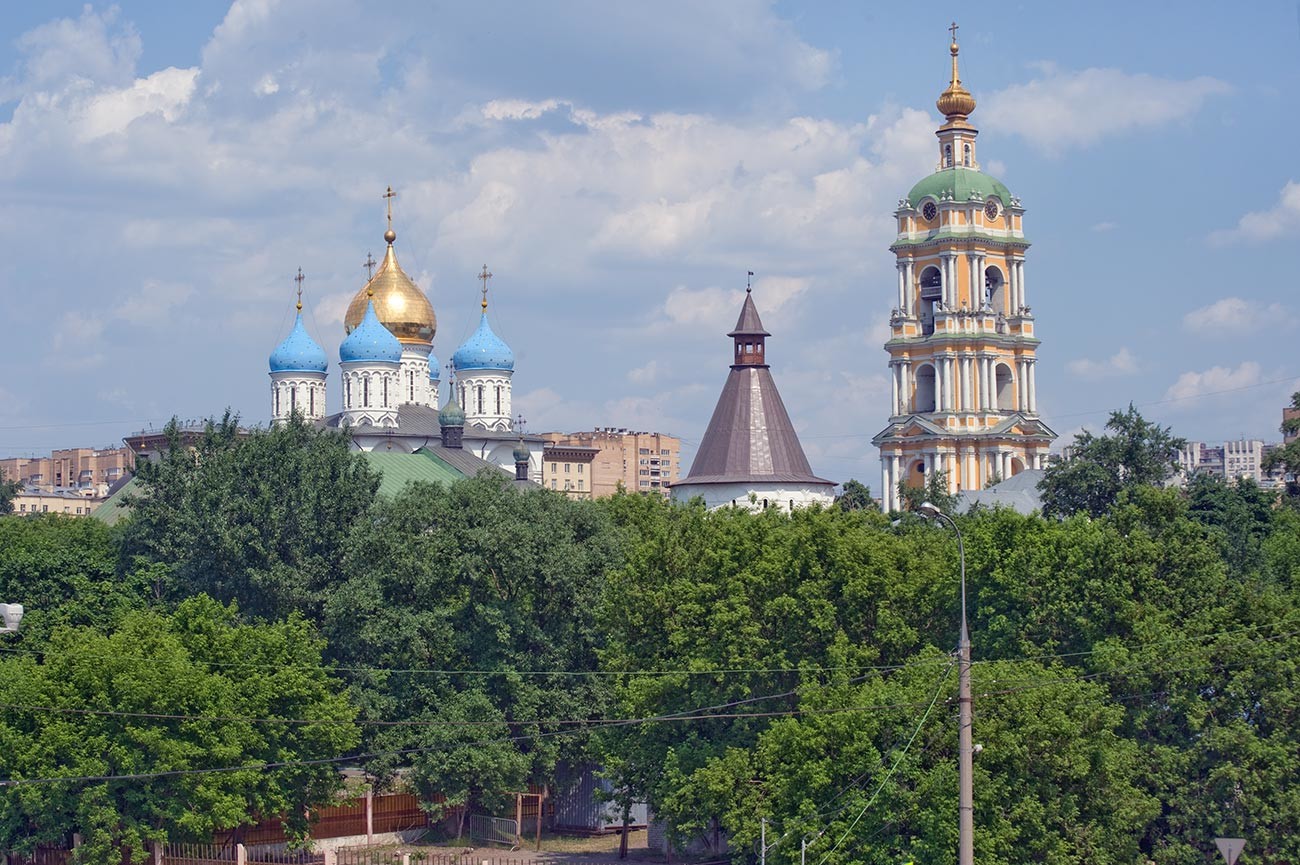 At the beginning of the 20th century, the Russian chemist and photographer Sergey Prokudin-Gorsky invented a complex process for vivid, detailed color photography. His vision of photography as a form of education and enlightenment was demonstrated with special clarity through his photographs of architectural monuments in the historic sites throughout the Russian heartland. 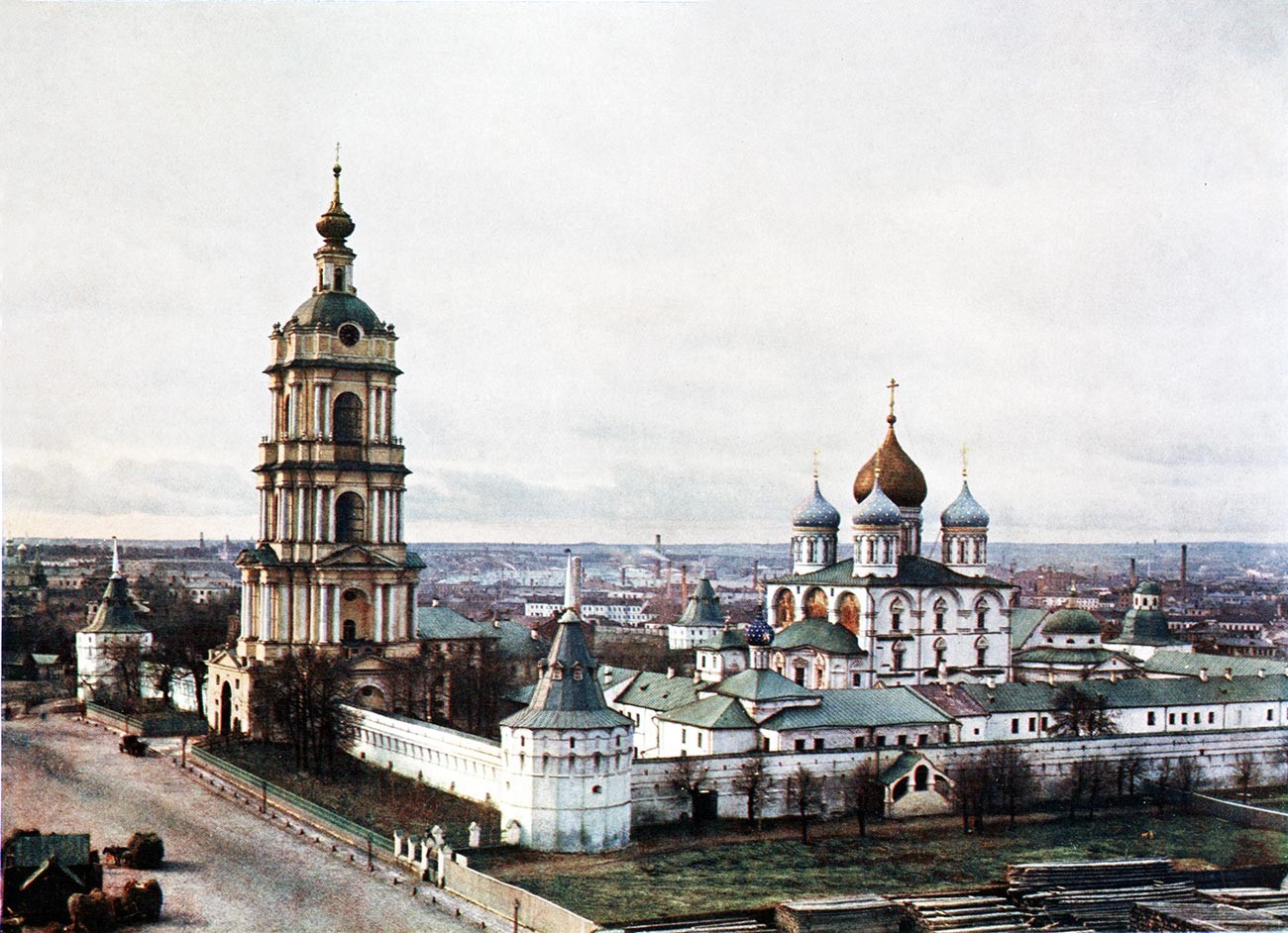 In addition to his photography work, Prokudin-Gorsky also established a business that produced color postcards and illustrations in books. In 1914, his enterprise was reestablished under the name Biochrome. Among the publications featuring his color photographs was a large volume published in 1913 to commemorate the tercentenary of the Romanov dynasty. The illustrations included his panoramic view from a nearby rooftop of one of Russia’s most historic monastic institutions, the Novospassky (New Savior) Monastery. 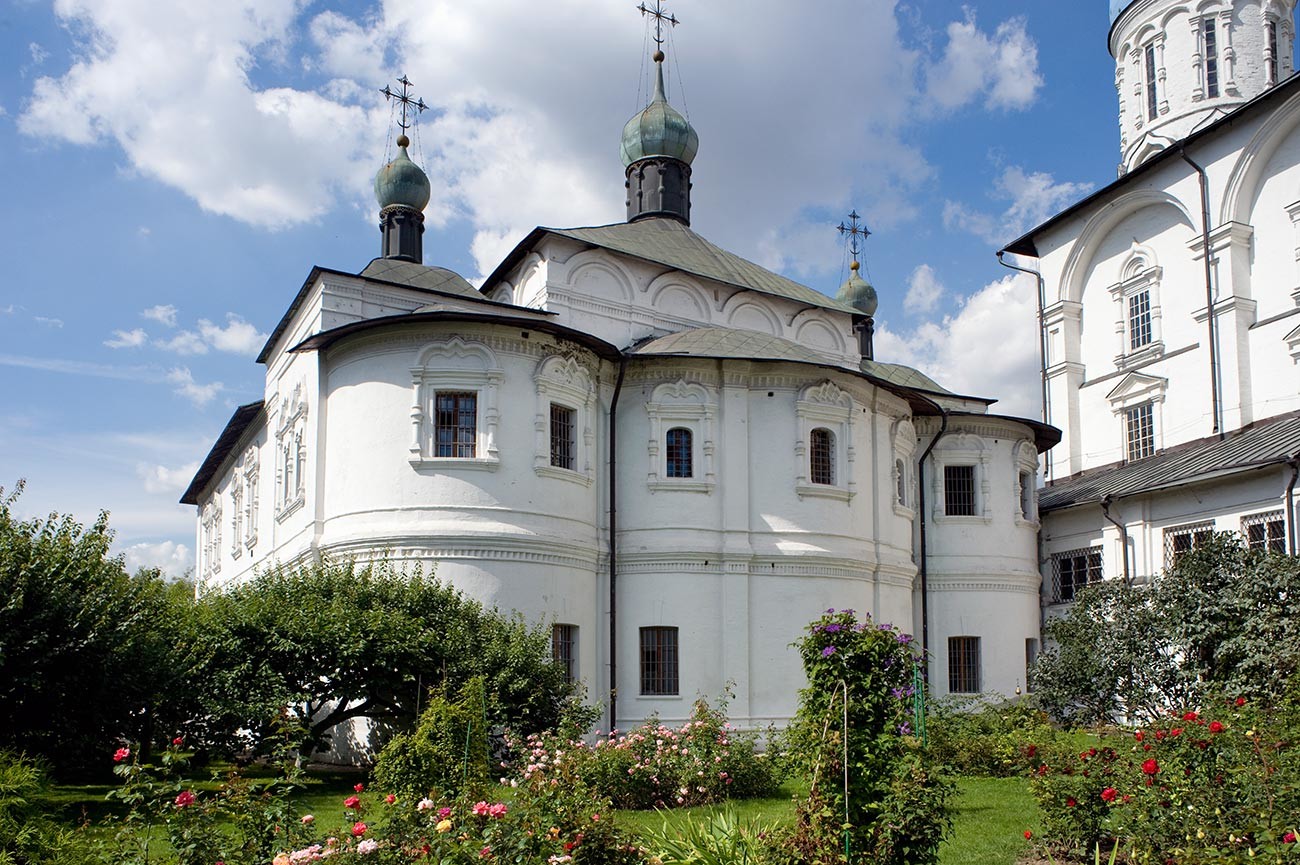 Nestled in a small hill downriver from the Kremlin, the Novospassky Monastery is among the oldest religious institutions in Moscow. Like many of the city's other monasteries, its story intertwines Russia’s spiritual and political history. By some accounts, the monastery was initiated in the 1150s by the founder of Moscow, Prince Yury Dolgoruky. At that time, it was located south of the Moscow River on the site of what is now Danilov Monastery. 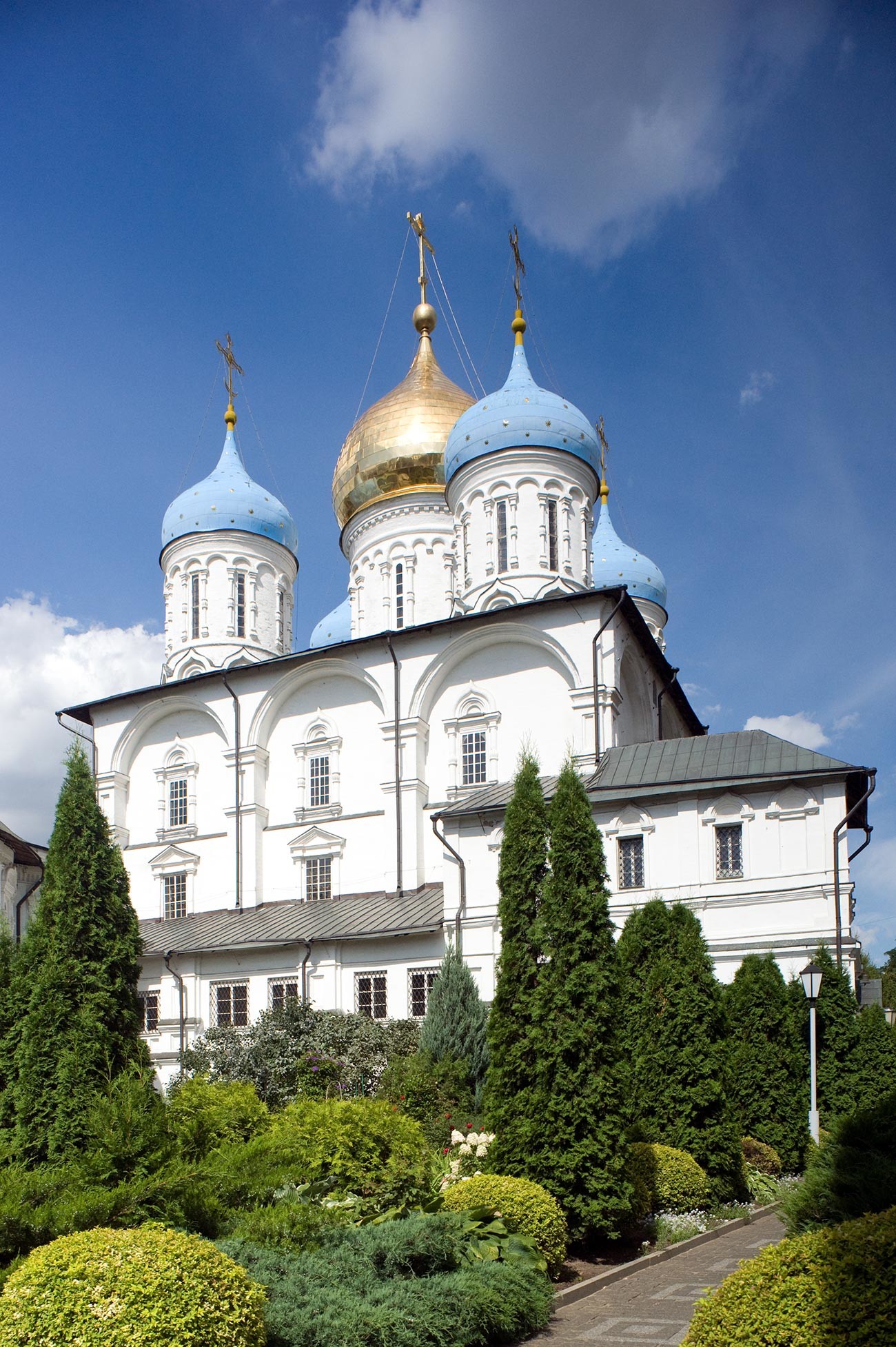 In the early 14th century, the Savior Monastery was reestablished inside the Kremlin by Grand Prince Ivan Kalita. Its main church, the Savior in the Forest, was Moscow's oldest surviving structure until it was destroyed in a Soviet rebuilding of the Kremlin in the 1930s. In 1490, Grand Prince Ivan III (the Great) moved the monastery to its current location on Krutitsky Hill overlooking the Moscow River and reconsecrated it as the Novospassky (New Savior) Monastery. Strategically located, the monastery had stout walls and towers in a rough pentagonal plan that enabled it to serve as a fortress. Along with other major monasteries on the southern fringe of Moscow, the Novospassky Monastery played a role in repulsing a major raid by Crimean Tatars in 1591. 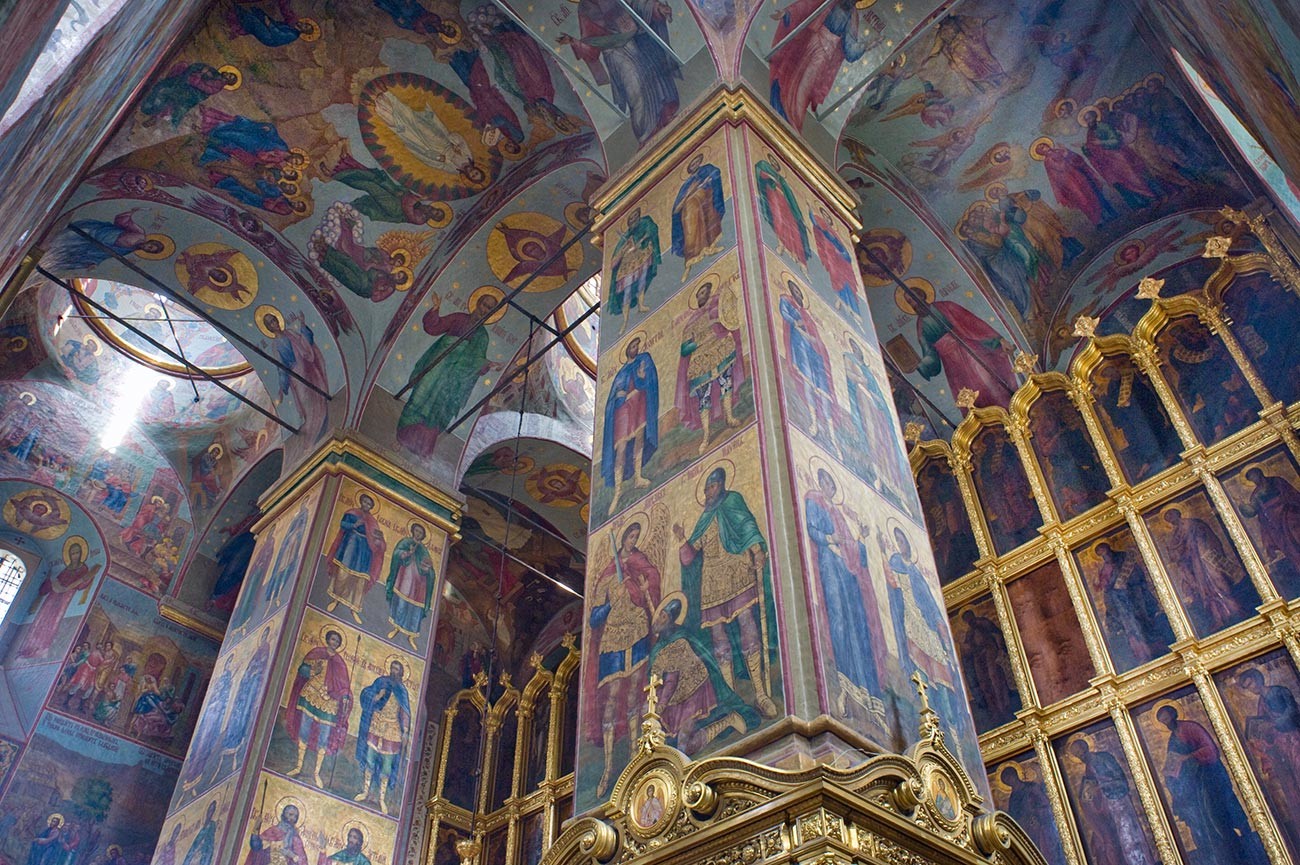 Like much of Moscow, the monastery was sacked during the early 17th-century dynastic crisis known as the Time of Troubles. With the establishment of the Romanov dynasty in 1613, the Novospassky Monastery gained unprecedented lustre as a favored institution of the new ruling family. 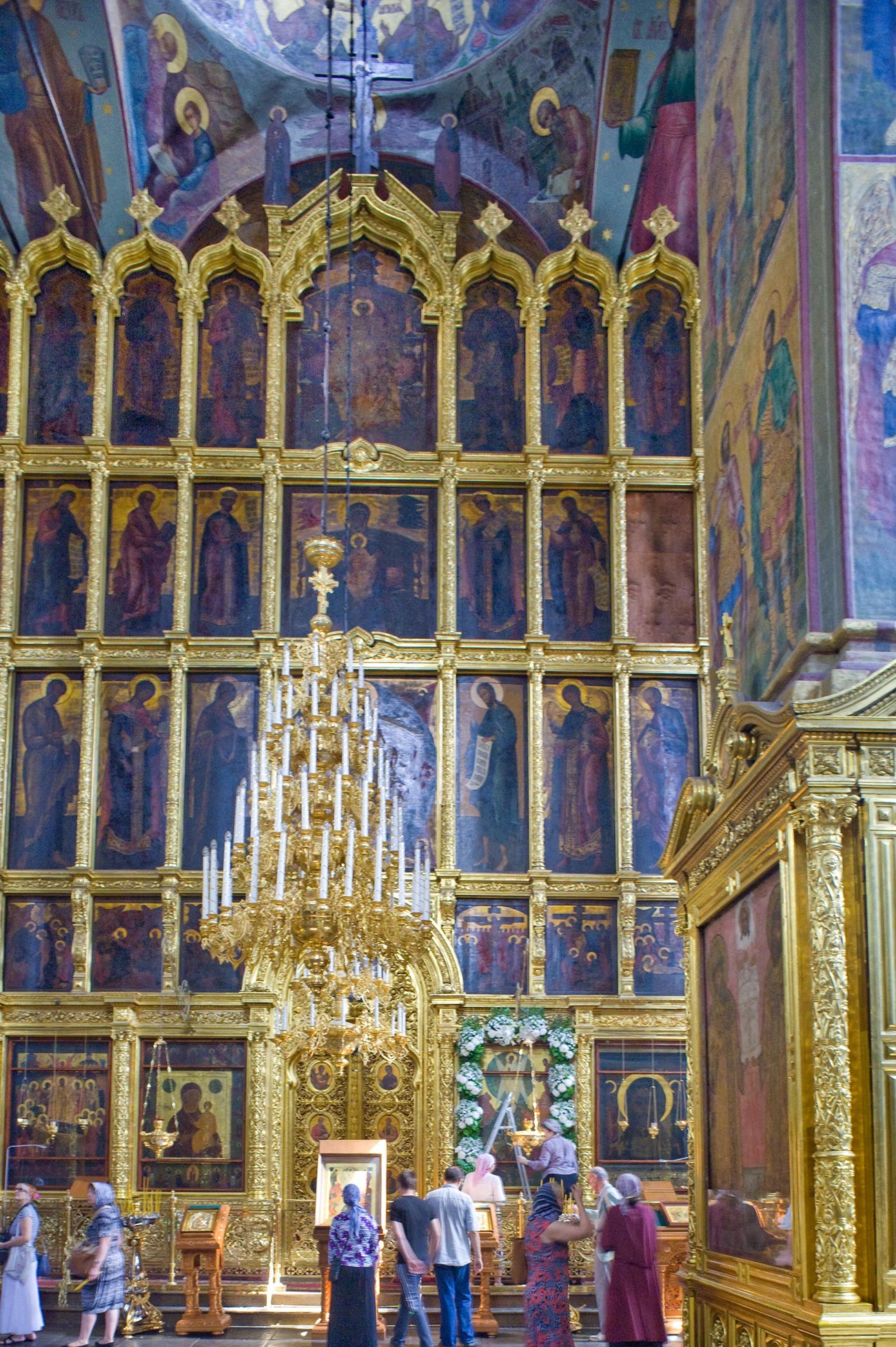 Indeed, as the source of the Romanov name, Roman Zakharin is considered the dynasty's forefather. His son, Nikita, founded the dynasty and his grandson Fyodor Nikitich (subsequently Patriach Filaret, head of the Russian Orthodox Church) was the father of the first Romanov tsar, Mikhail (1596-1645). Toward the end of Mikhail’s reign, a major expansion of the monastery began with the rebuilding of its massive brick walls and towers in 1640-42. 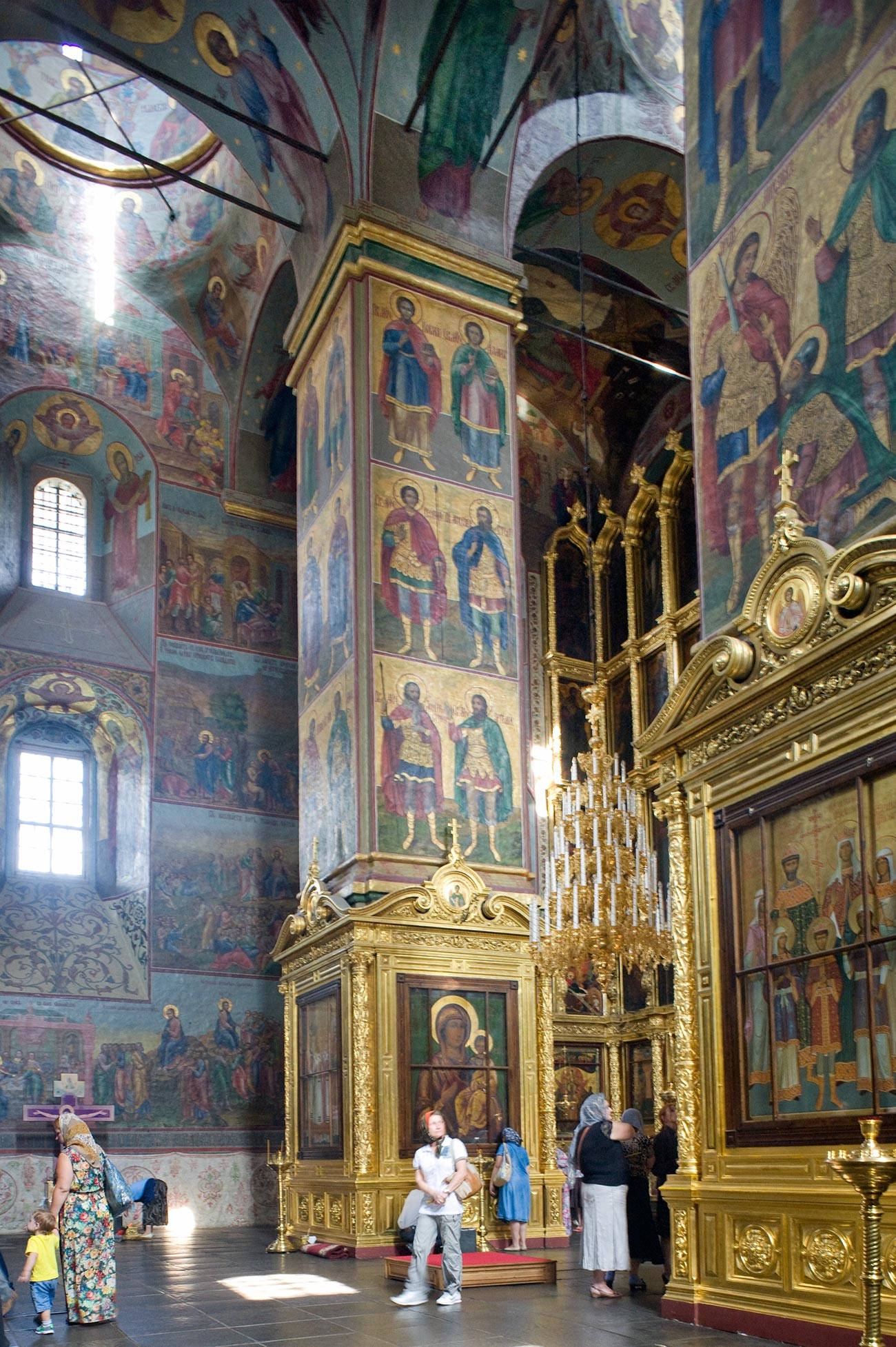 Michael's successor, Tsar Alexei Mikhailovich (1629-76), presided over further expansion with the rebuilding of the Cathedral of the Transfiguration of the Savior in 1645-49. This monumental structure replaced the original monastery church, built at the end of the 15th century over the graves of the Romanov ancestors. 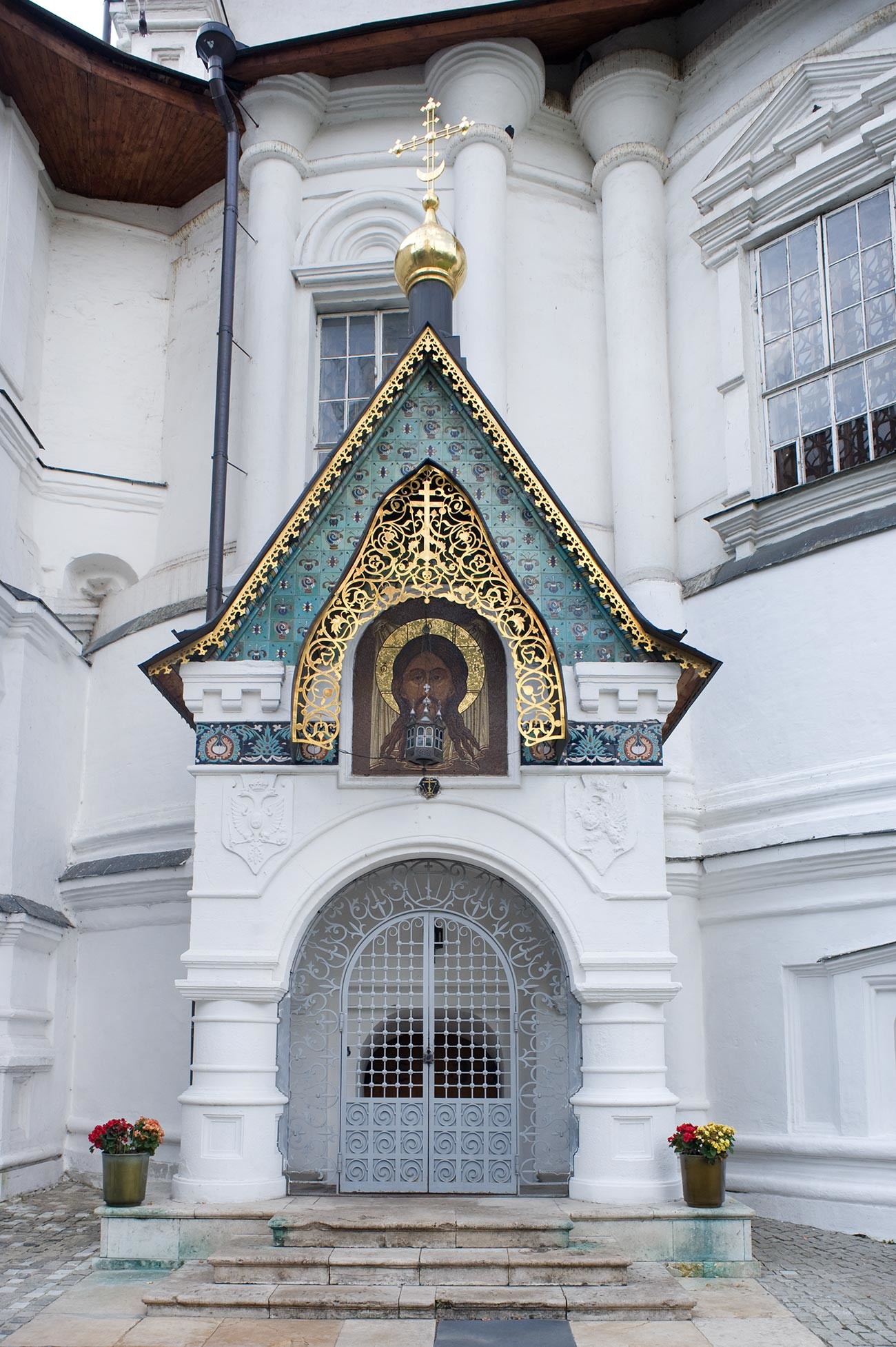 In 1650, the Transfiguration Cathedral gained its monumental five-tiered icon screen, with icons painted by master artists from the Kremlin. The frescoes that cover the cathedral interior were painted in 1689 at the order of Tsar Peter I (the Great). Both the icon screen and the frescoes have been recently restored. 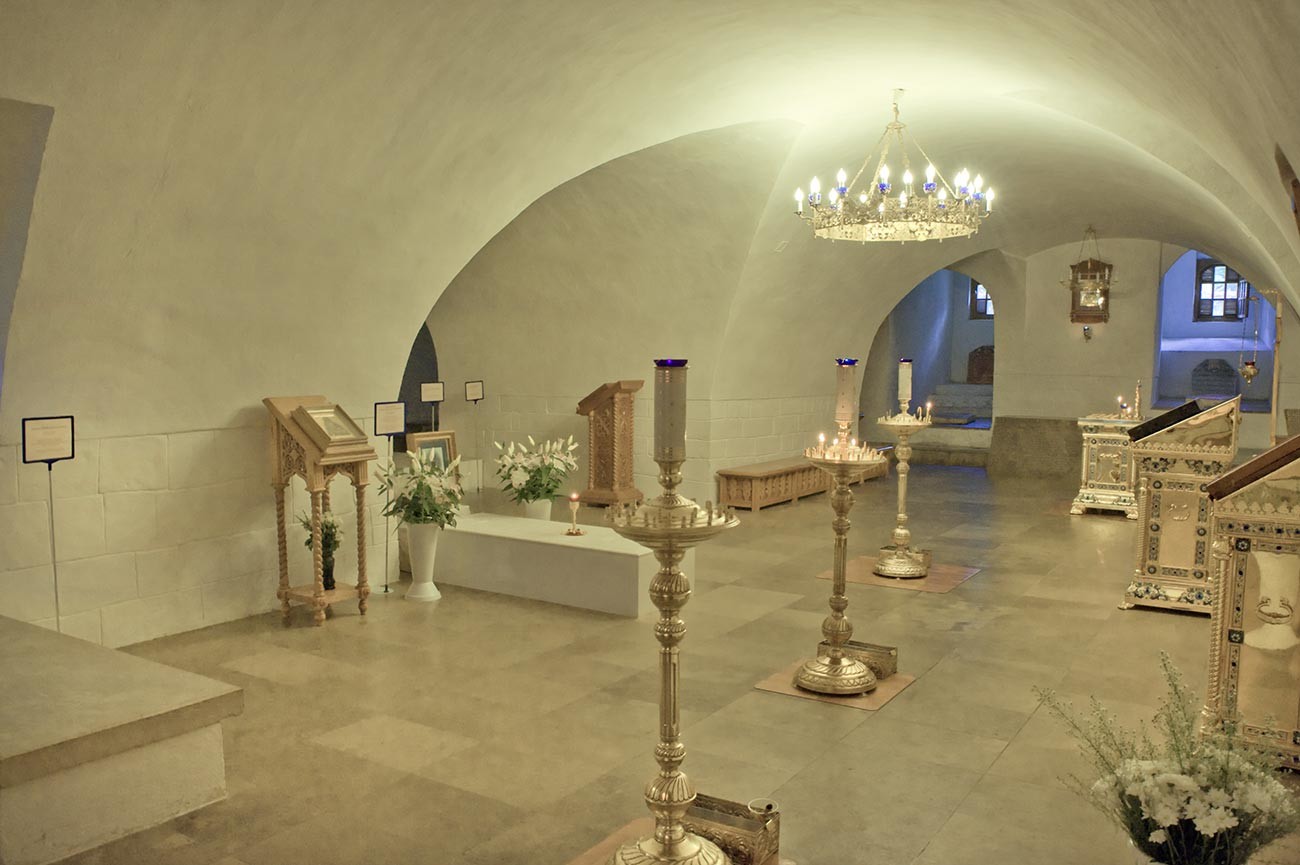 Next to the Savior Cathedral is the Church of the Intercession, built in 1673-75 and connected to the cathedral at its southwest corner. The present wall paintings in the large refectory of the Intercession Church were done in 1877. 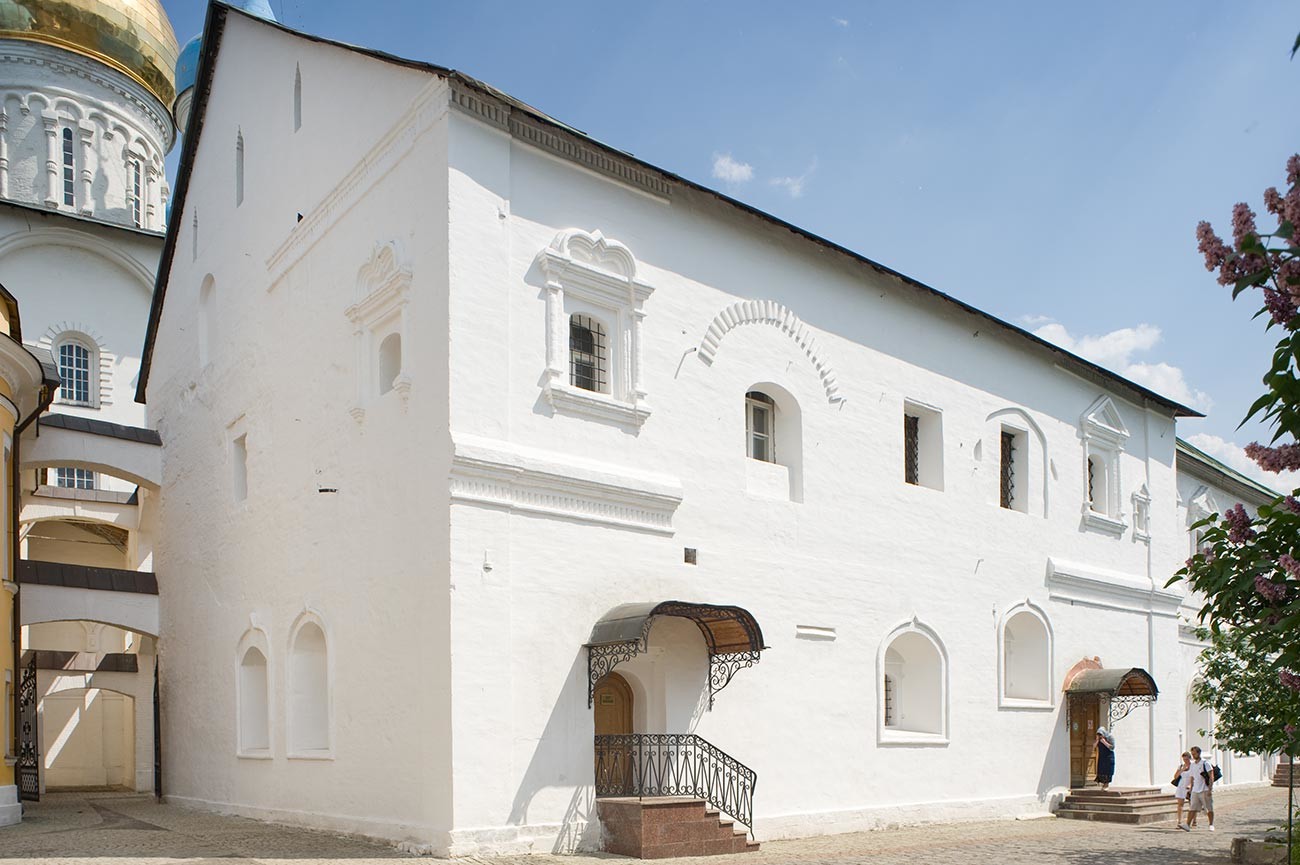 By the turn of the 18th century, royal favor had enabled Novospassky Monastery to become one of the wealthiest in Moscow, with some 14,000 peasants on its rolls. In 1764, however, Catherine II (the Great) stripped monasteries of their land holdings. 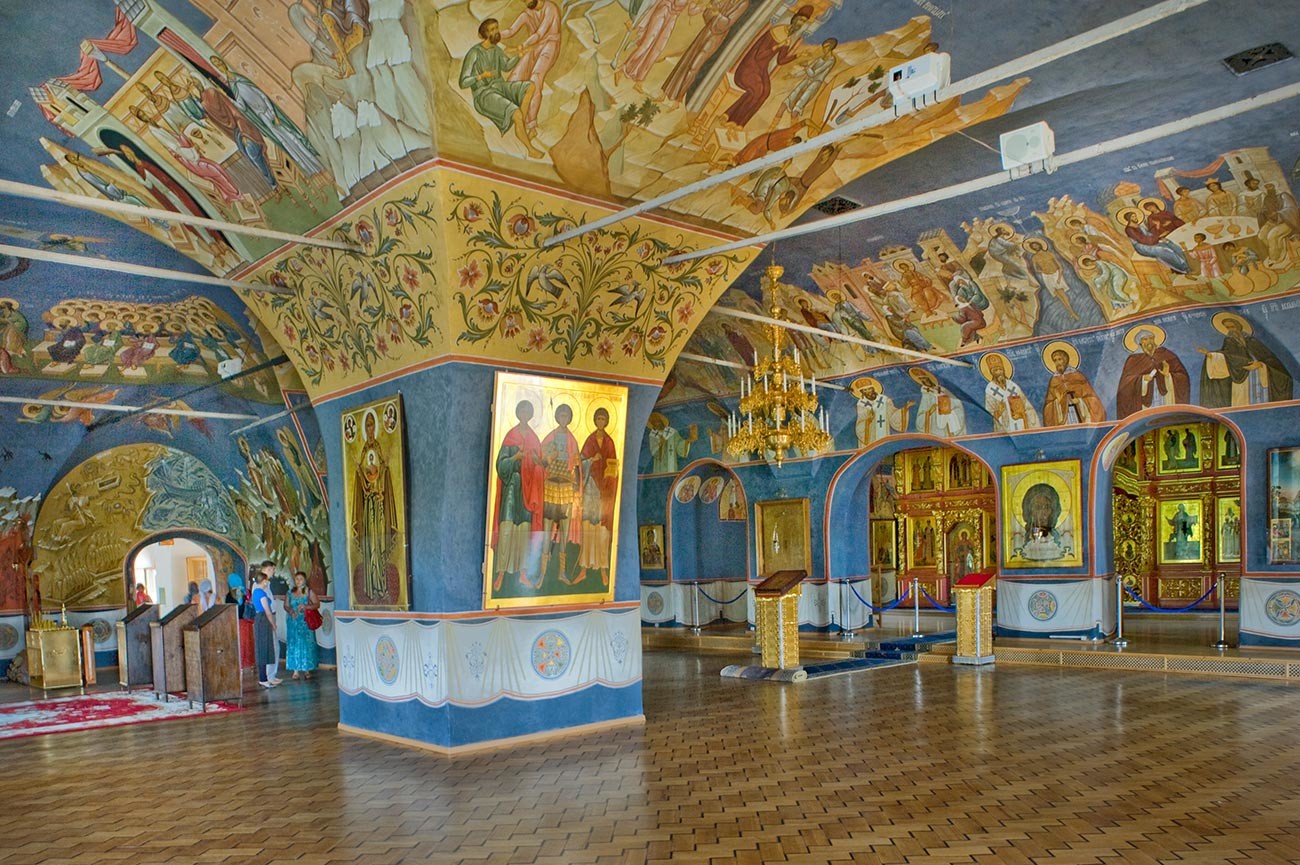 The most notable addition to the monastery in the 18th century was its bell tower, one of the largest in Moscow (265 feet from its base to the cupola). Designed by Ivan Zherebtsov, the construction on the tower began in 1759 but was completed only in 1785. Its second level contains a small church dedicated to St. Sergius of Radonezh, the avatar of Muscovite monasticism.

In 1791-95, the Church of the Znamenie Icon of the Virgin (Icon of the Sign) was reconstructed in a neoclassical style at the northeast corner of the Transfiguration Cathedral. Originally built by Tsar Mikhail Romanov over his ancestors' graves, the new structure was supported by the Sheremetev family, whose members were buried on the lower level. 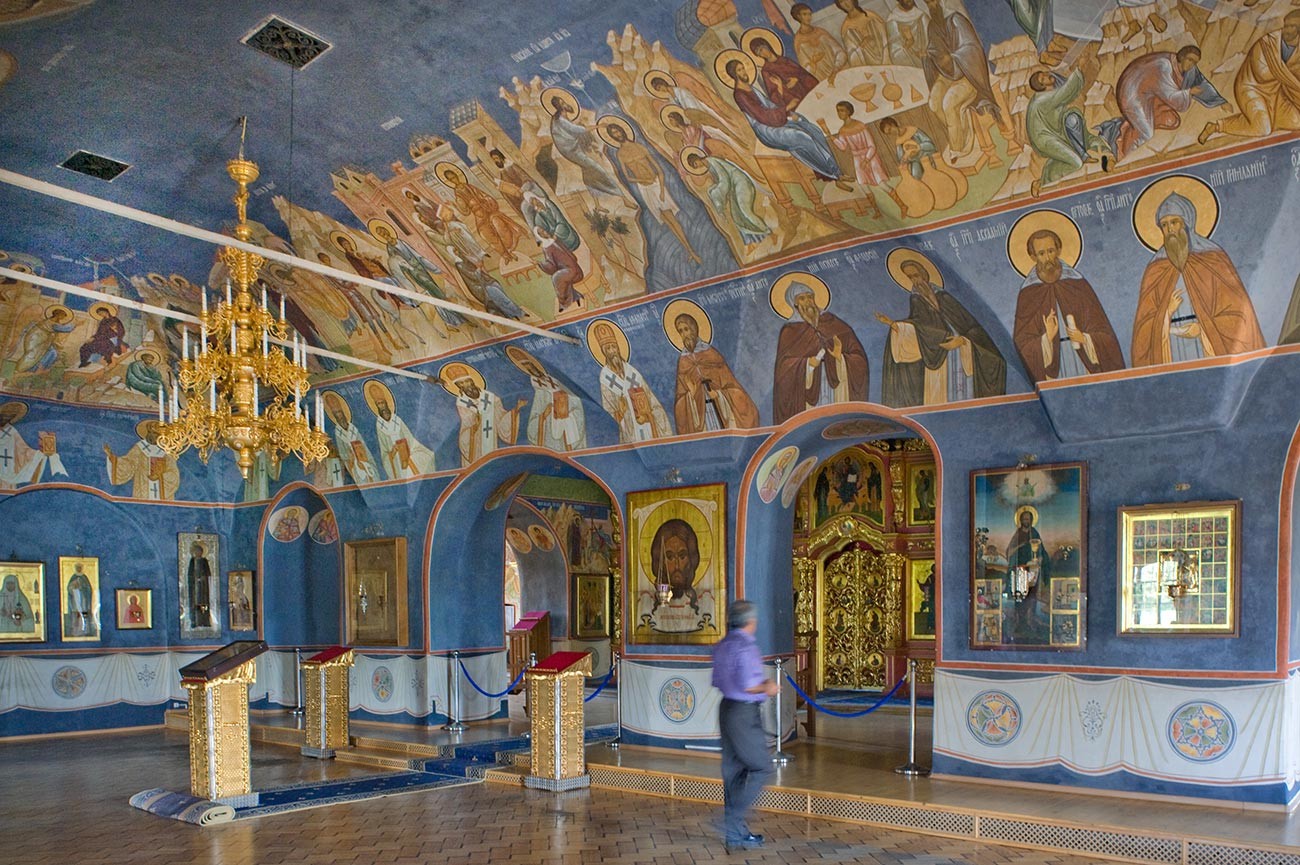 During the French occupation of Moscow in the fall of 1812, the Znamenie church was used as a stables, and the monastery generally suffered extensive damage. Its churches were reconsecrated in 1813, and the monastery retained its favored status. In 1913, a brightly painted chapel was erected after a visit by Nicholas II during the commemoration of the tercentenary of the dynasty.

In 1918, after the Bolshevik revolution, the monastery was closed and the Romanov crypt vandalized. In the late 1930s, the territory served as a place of execution for the NKVD, whose victims were buried in common graves next to the walls. 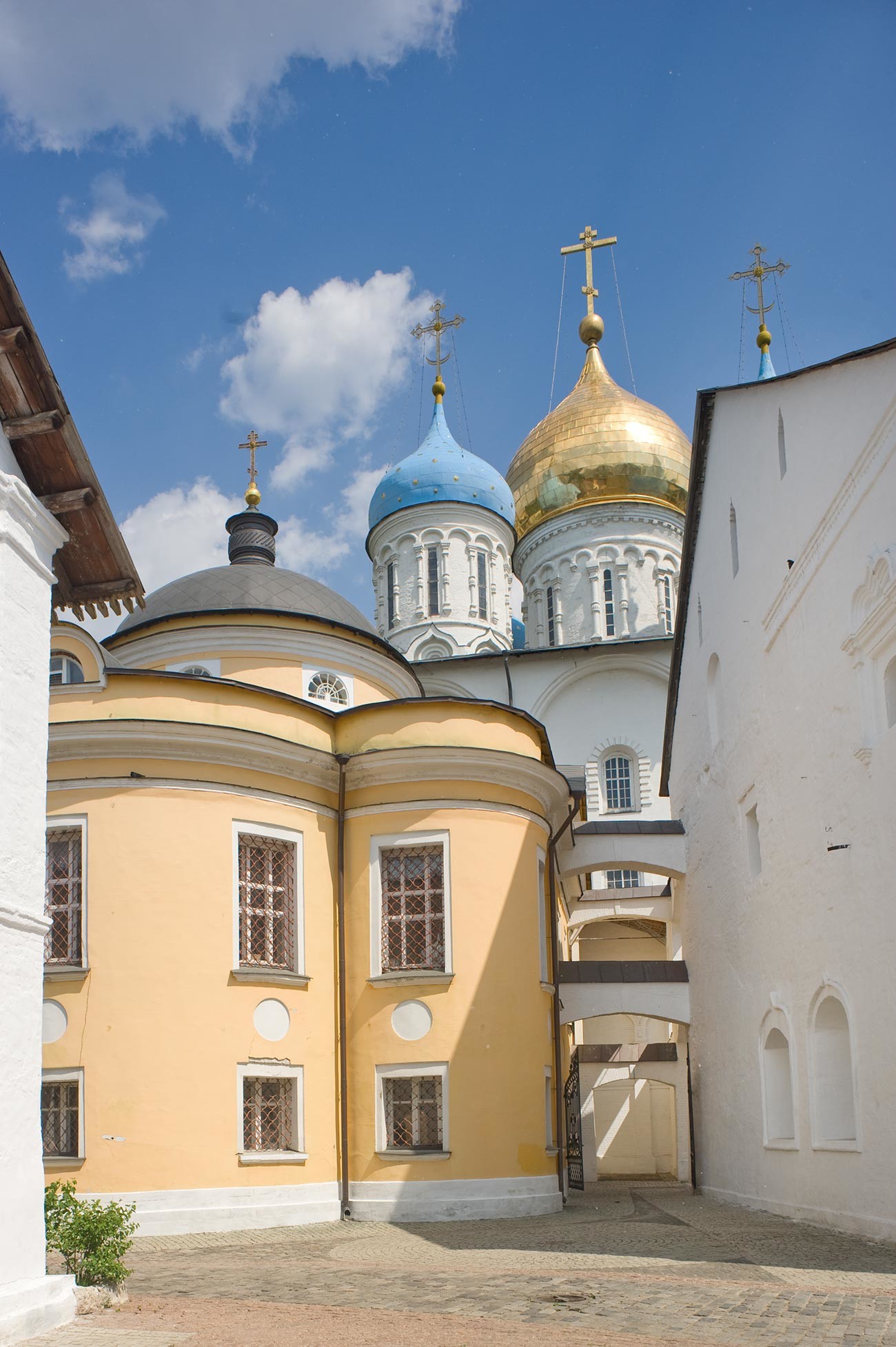 During the Soviet period, the noted cemetery on the monastery grounds was destroyed in stages extending to the early 1970s. However, a small chapel stands over one grave that has survived – that of the nun Dosifeya, better known as Princess Tarakanova.

Although her origins remain wrapped in obscurity, "Princess Volodimirskaya" (as she called herself) claimed to be the daughter of Empress Elizabeth Petrovna and her favorite Alexei Razumovsky. The intrigues surrounding this claim were seen as a threat to the legitimacy of Catherine the Great, who had skeletons of her own. Catherine commanded Count Alexei Orlov to abduct the princess from Italy, and at the beginning of 1775, she was delivered to St. Petersburg's fortress. 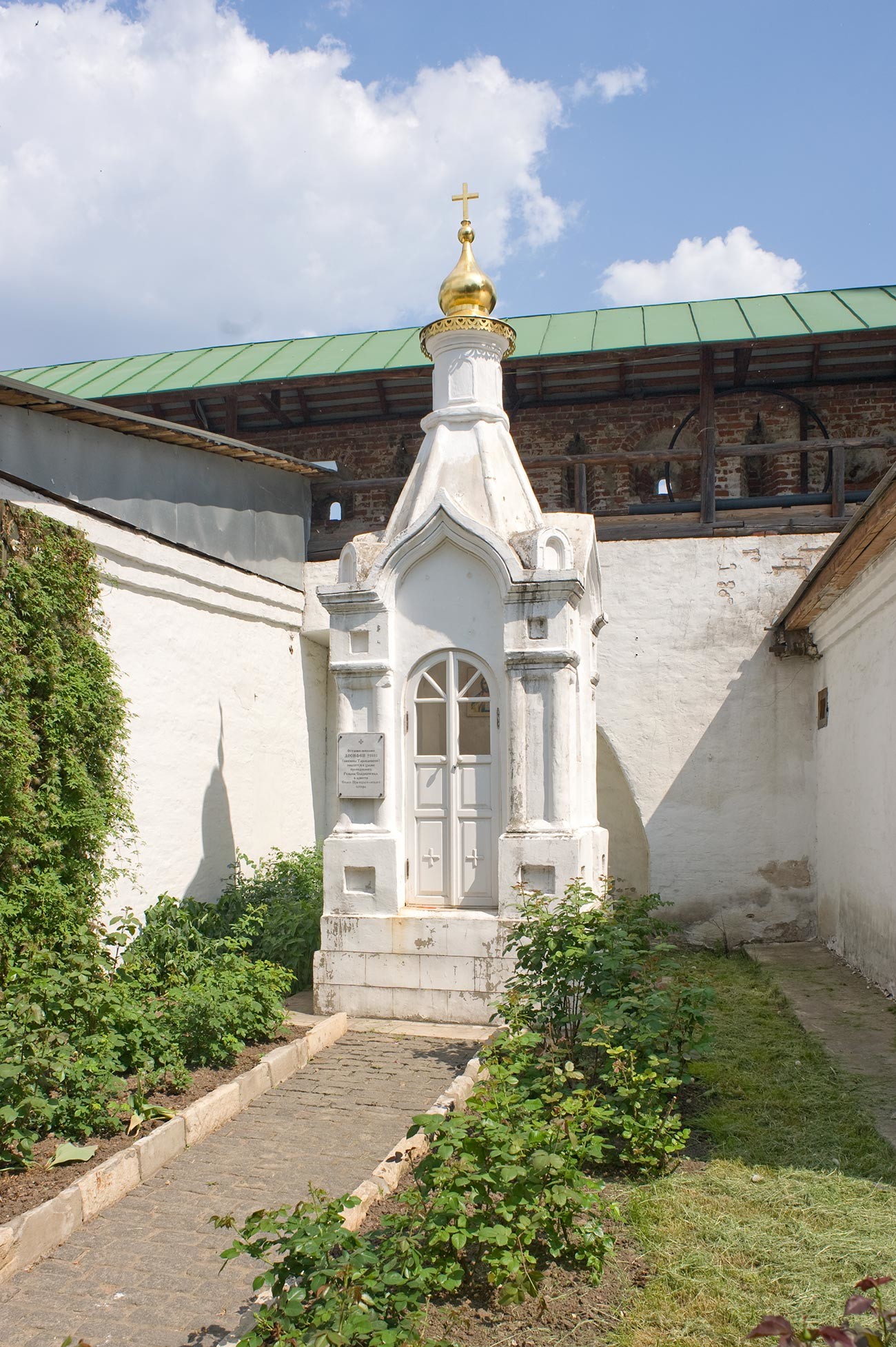 Novospassky Monastery. Chapel over the grave of the nun Dosifeya. May 25, 2014

There are lurid stories and paintings of her death later that year. The official version was that she died of tuberculosis and was buried in the Peter-Paul Fortress. But a rival account has her taking the veil as Dosifeya (after her presumed death) and eventually living in Moscow's John the Baptist Convent from 1785 to 1810. Dosifeya’s remains were buried at Novospassky Monastery near the Romanovs, and in 1907 a small chapel was erected over her grave to the left of the great bell tower. 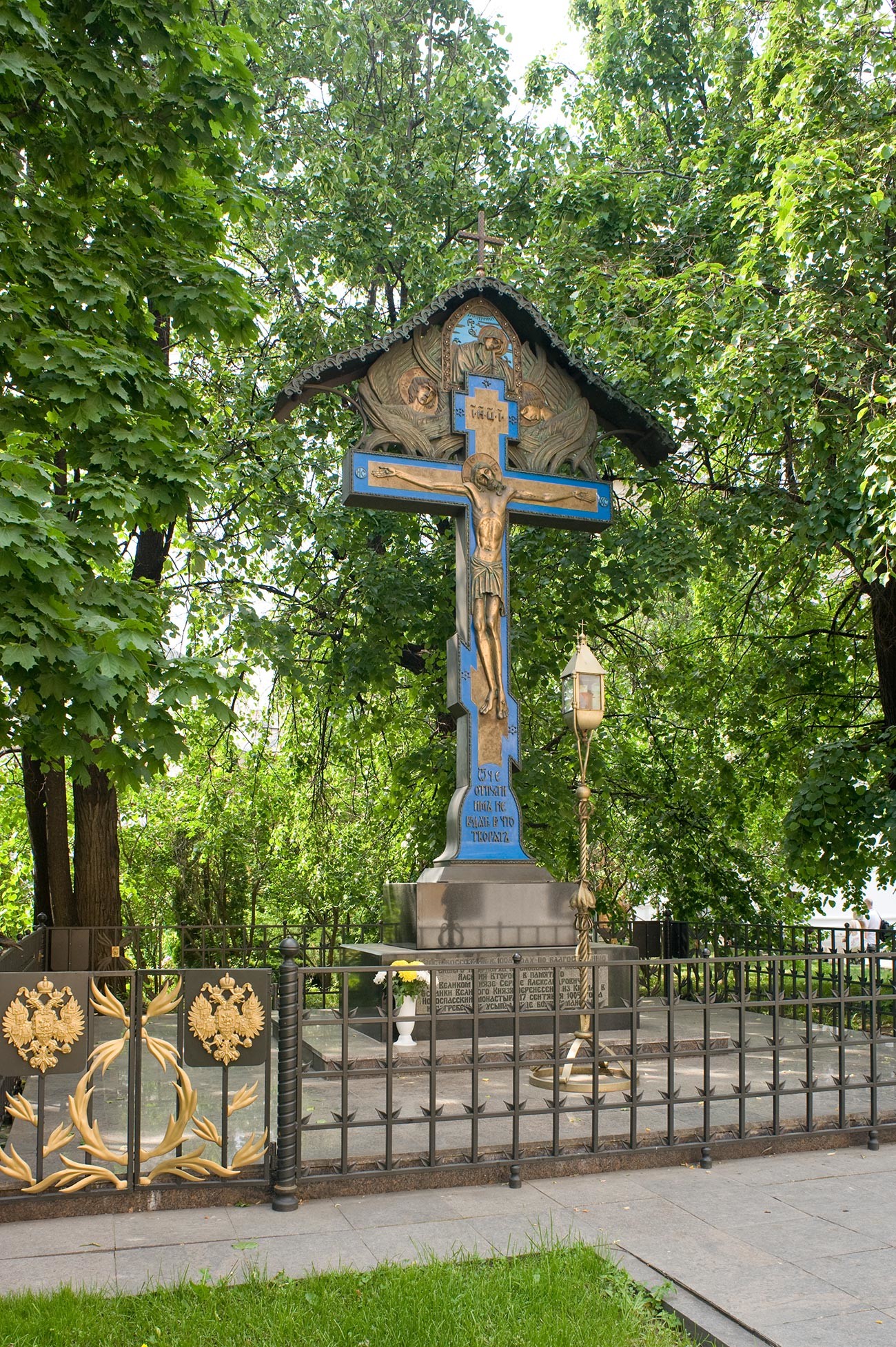 Novospassky Monastery was officially declared a historical and cultural monument in 1965, the beginning of a process of restoration that lasted over two decades. In March 1991, the monastery was returned to the Orthodox Church, and soon thereafter resumed its function as a Romanov shrine.

In 1998, a memorial cross was erected to Grand Duke Sergei Alexandrovich, Governor-General of Moscow, whose extremely conservative policies alienated many and made him a target of Russian radicals. In February 1905, he was assassinated by a bomb upon entering the Kremlin. His sarcophagus was discovered during Kremlin excavations in 1990, and in 1995 his remains were reinterred at Novospassky Monastery. The cross is a copy of the one designed by the artist Viktor Vasnetsov and placed in the Kremlin in 1908. 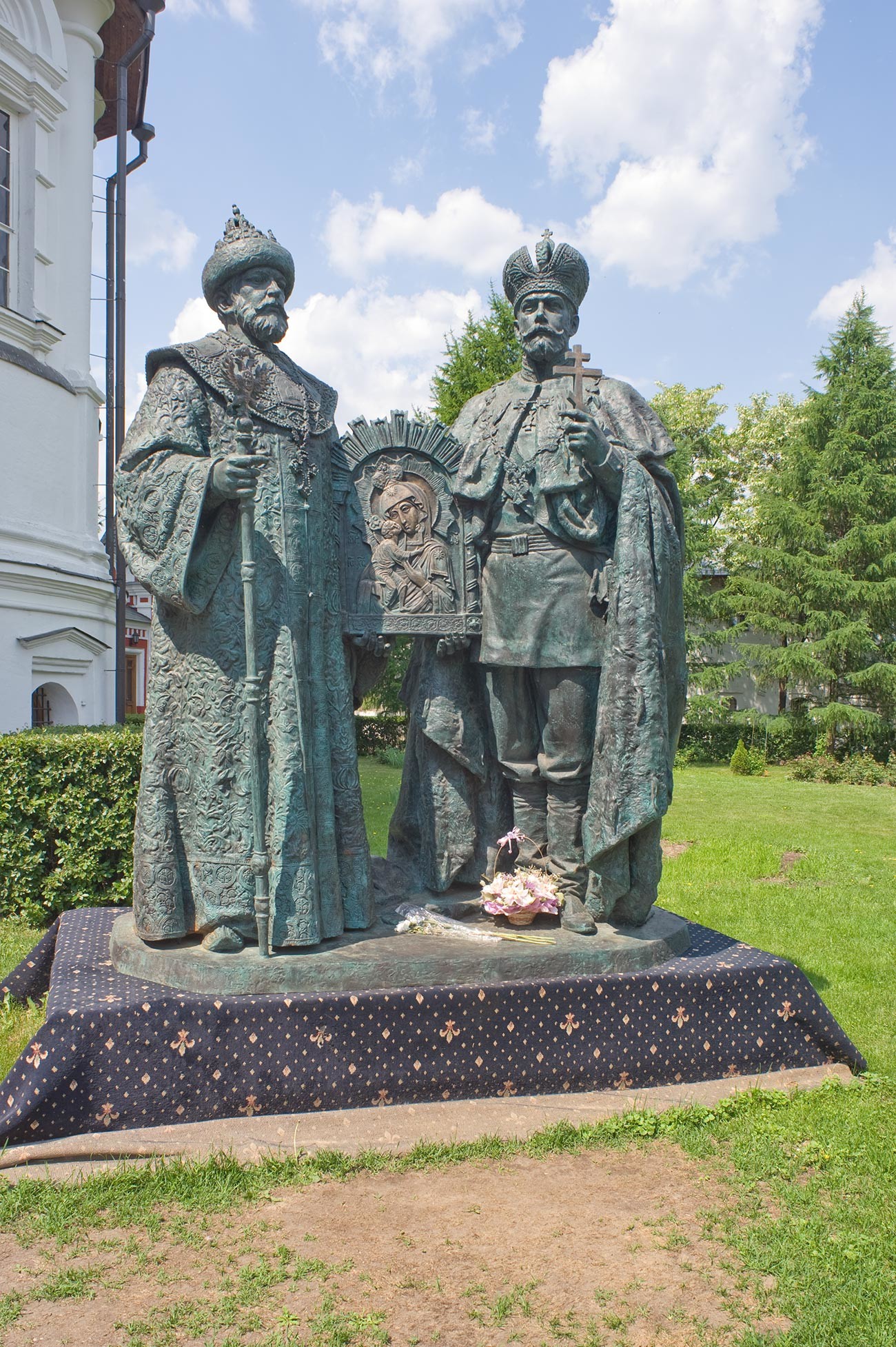 In September 2013, the model of a monument depicting Mikhail and Nicholas II – the first and last Romanov tsars – with St. Theodore Icon of the Virgin between them, was unveiled near the cathedral apse. Witness to so much turbulent and dark history, Novospassky Monastery is now a carefully maintained refuge from the nearby bustle of Moscow. 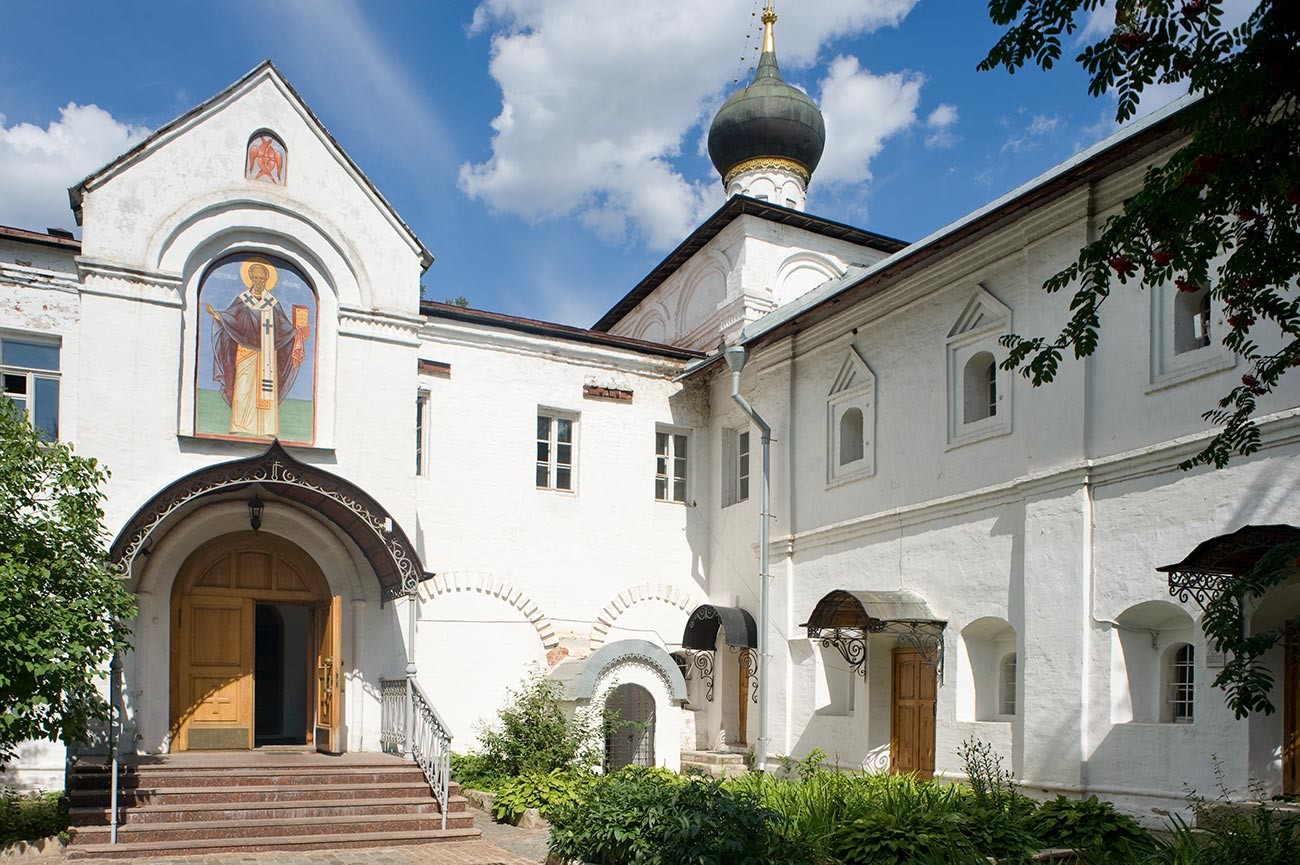