The Dormition Cathedral: Regal monument in the Kremlin

Travel
William Brumfield
Historian and architecture expert William Brumfield discovers the connections between the Russian monarchy and this monument to the Orthodox faith. 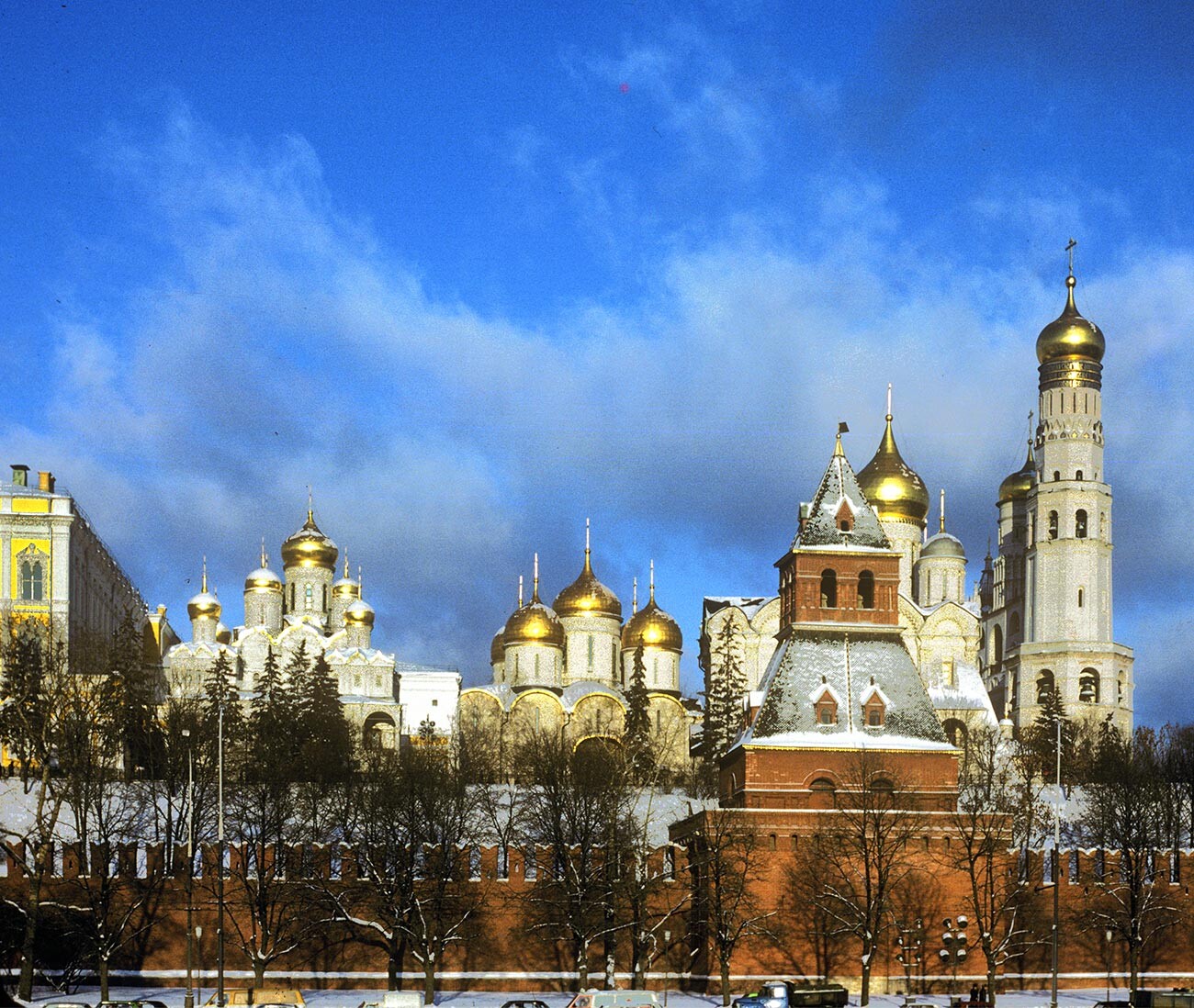 At the beginning of the 20th century, the Russian chemist and photographer Sergey Prokudin-Gorsky developed a complex process for vivid, detailed color photography. In addition to his work as a photographer, he also established a business that produced color postcards and illustrations in books.

In 1913, he released a large volume of illustrations to mark the tercentenary of the Romanov dynasty. It included Prokudin-Gorsky’s photographic reproductions of watercolor miniatures made for an album presented in 1673 to Tsar Alexei Mikhailovich and devoted to events leading to the enthronement in 1613 of his father, Mikhail Fedorovich, the first Romanov tsar. 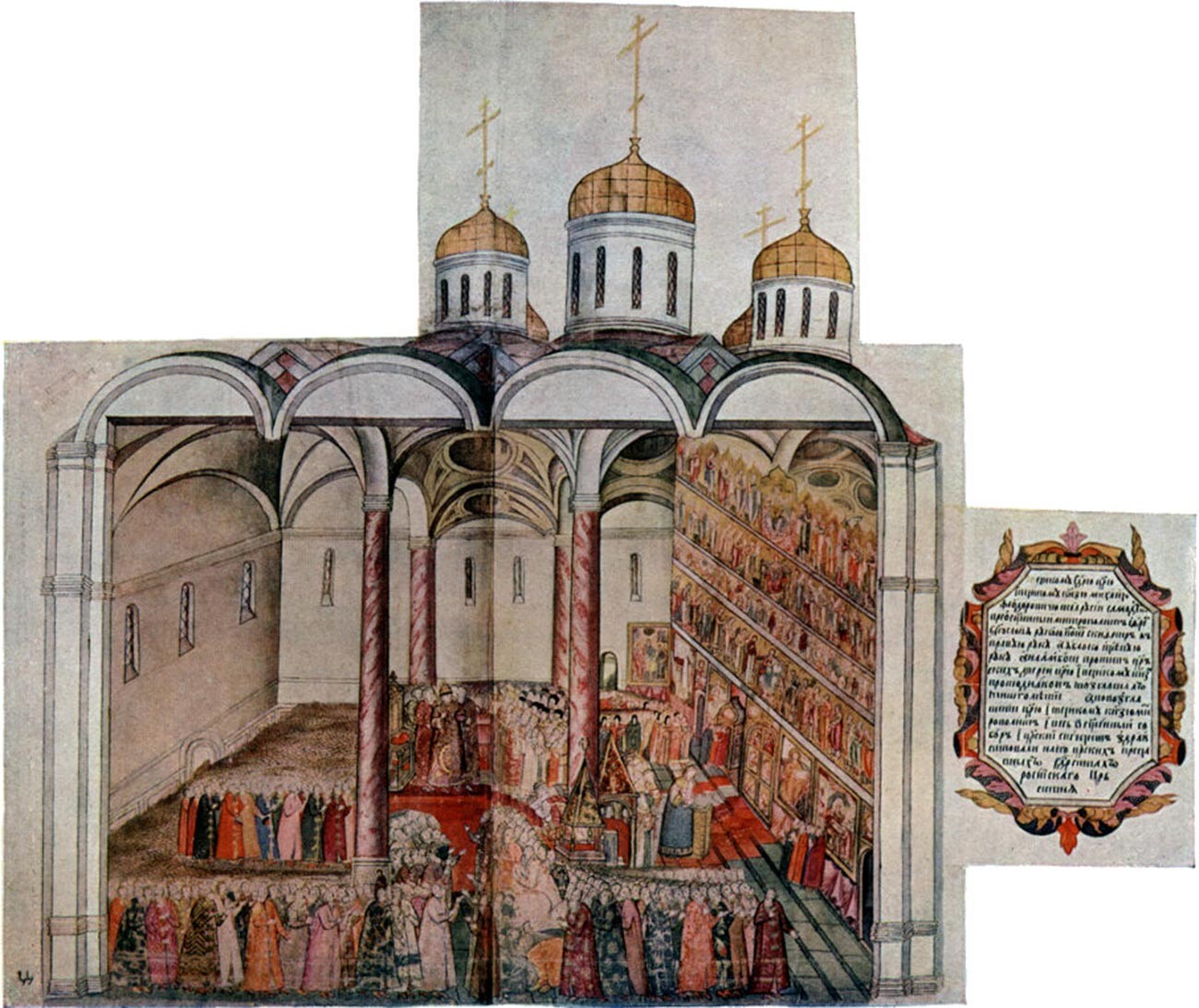 Among the illustrations is a depiction of the solemn coronation ceremony on July 11, 1613 in the Dormition Cathedral of the Kremlin. The primary artist, Ivan Maksimov, neglected to show the walls painted with frescoes, but the right side depicts the cathedral’s grand icon screen.

At the heart of Russian identity 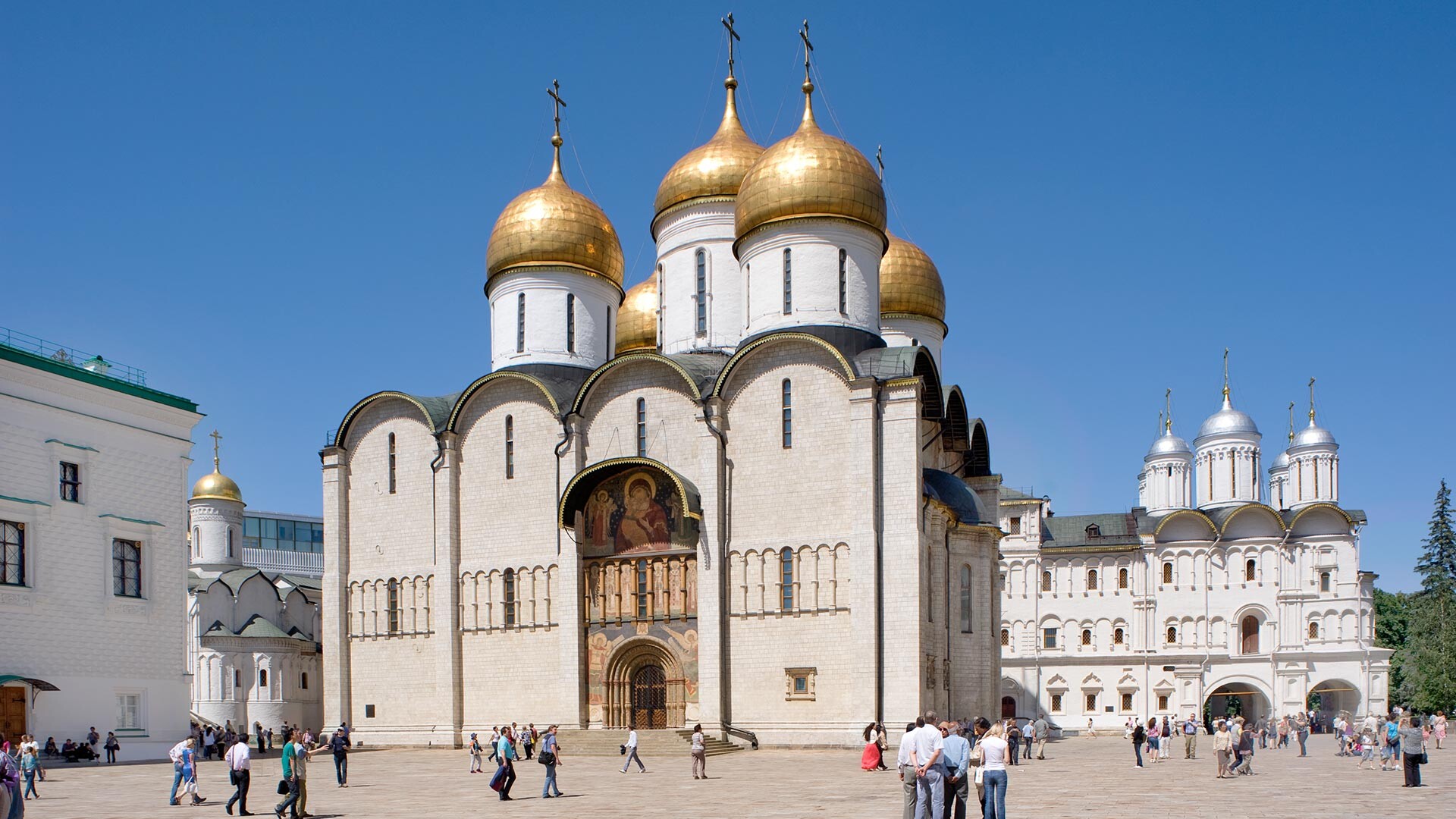 Russia has many sacred sites, but none is more important to the country’s identity than the golden-domed Dormition (Uspensky) Cathedral in the Moscow Kremlin. For centuries, this cathedral was Russia’s most important monument, at the center of its history, its politics, its culture, and its Orthodox religion. Even after the imperial court was moved to St. Petersburg, the coronation ceremony of each ruler of Russia occurred in this cathedral, including the coronation of Nicholas II on May 26, 1896. In 1991, it was again designated the Patriarchal Cathedral of Russia.​ 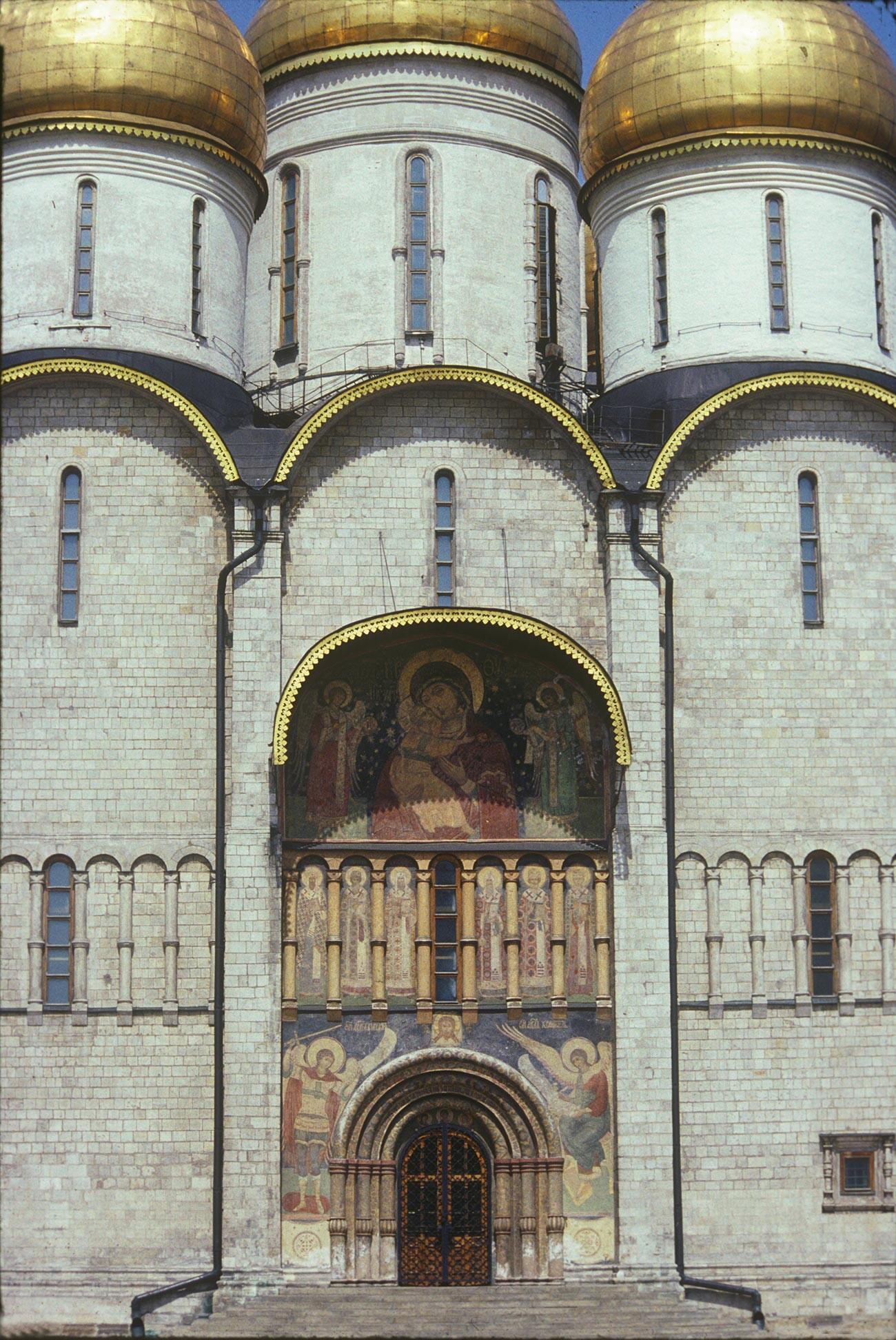 The ​Dormition Cathedral is dedicated to one of the most venerated mysteries in Orthodox theology, the Dormition of the Mother of God, which refers to the transposition of Mary from this world to the heavenly sphere. ​Orthodox iconography portrays the recumbent Mother of God, surrounded by apostles, falling asleep. This is the origin of the term “dormition” (in Russian “uspenie”) from the Latin verb dormire, “to sleep.” At this moment – in effect, Mary’s death –Christ accepts Mary’s soul into heaven three days before her “assumption,” in which her resurrected body is taken to heaven. 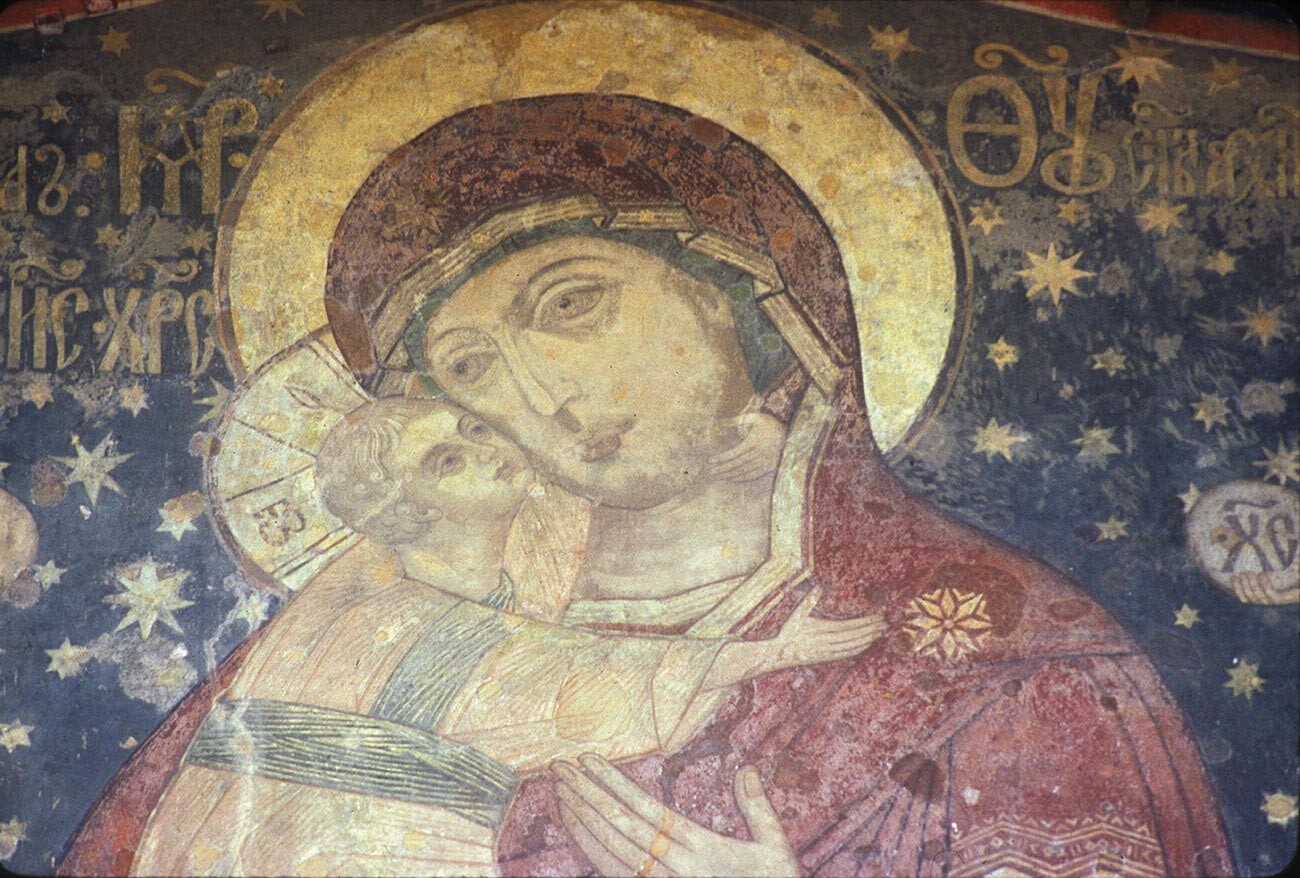 Dormition Cathedral. South facade, portal fresco in the form of the St. Theodore Icon of the Virgin. March 23, 1991

The origins of the Kremlin Dormition Cathedral are closely connected with the rise of Moscow’s power. In 1326, the leading Russian church prelate, Metropolitan Peter of Vladimir, made the Moscow Kremlin his de facto residence. The prelate’s health was in decline, and it was felt that the Moscow court could provide better care. This move, carefully cultivated by grand prince Ivan I (Kalita), was significant not only for the political and religious status of Moscow, but also for its architectural development. 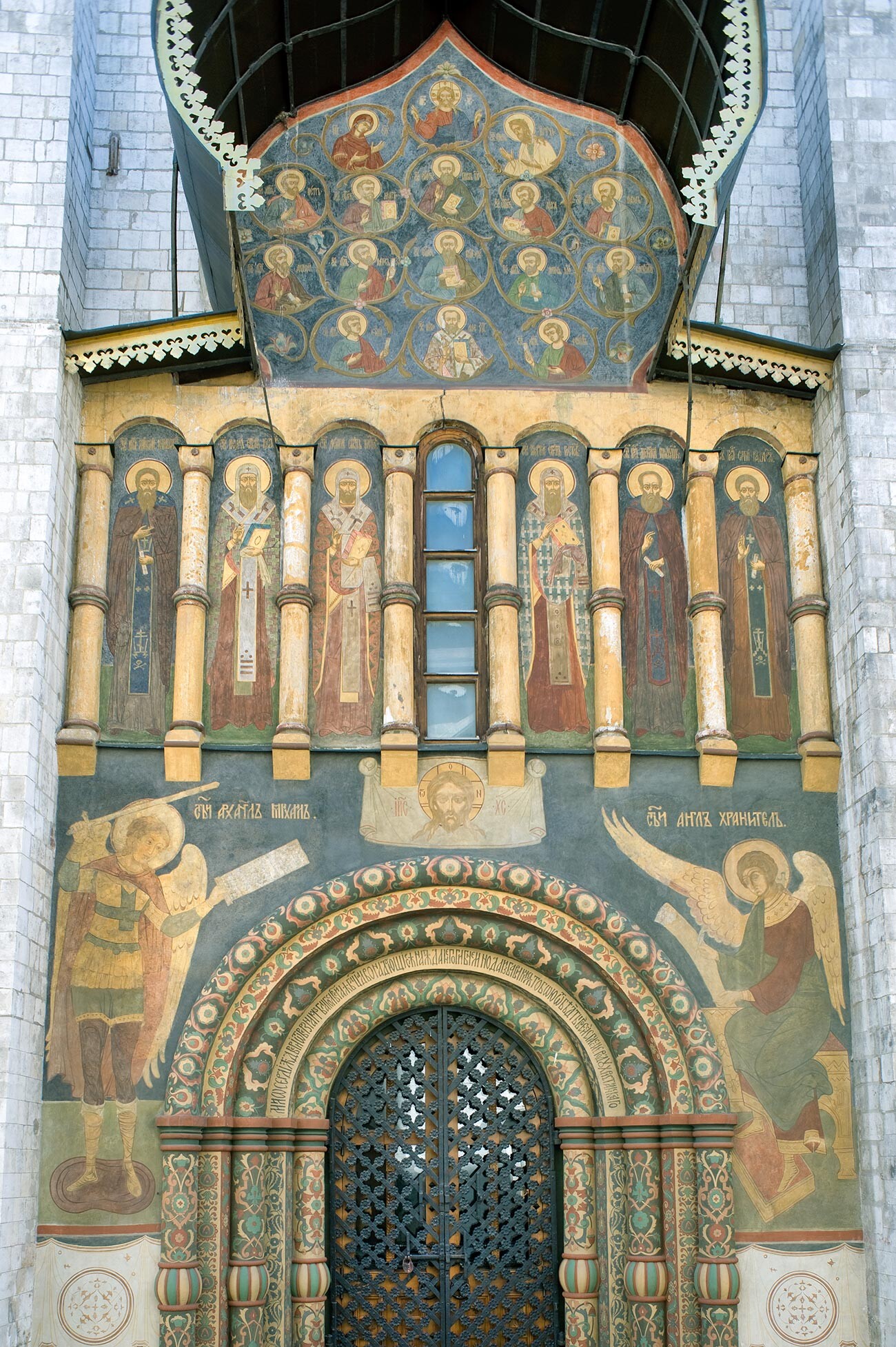 In 1326 Ivan, with the participation of Peter, laid the foundation ​stone ​for the Dormition Cathedral. Later in 1326, Peter was buried within the cathedral walls in a tomb that he had himself prepared, thus endowing the site with added religious significance when Peter was canonized in 1339. The cathedral’s dedication to the Feast of the Dormition symbolized the continuity with the great Dormition Cathedral in the town of Vladimir, political center of pre-Mongol Russia.

Defender of the faith 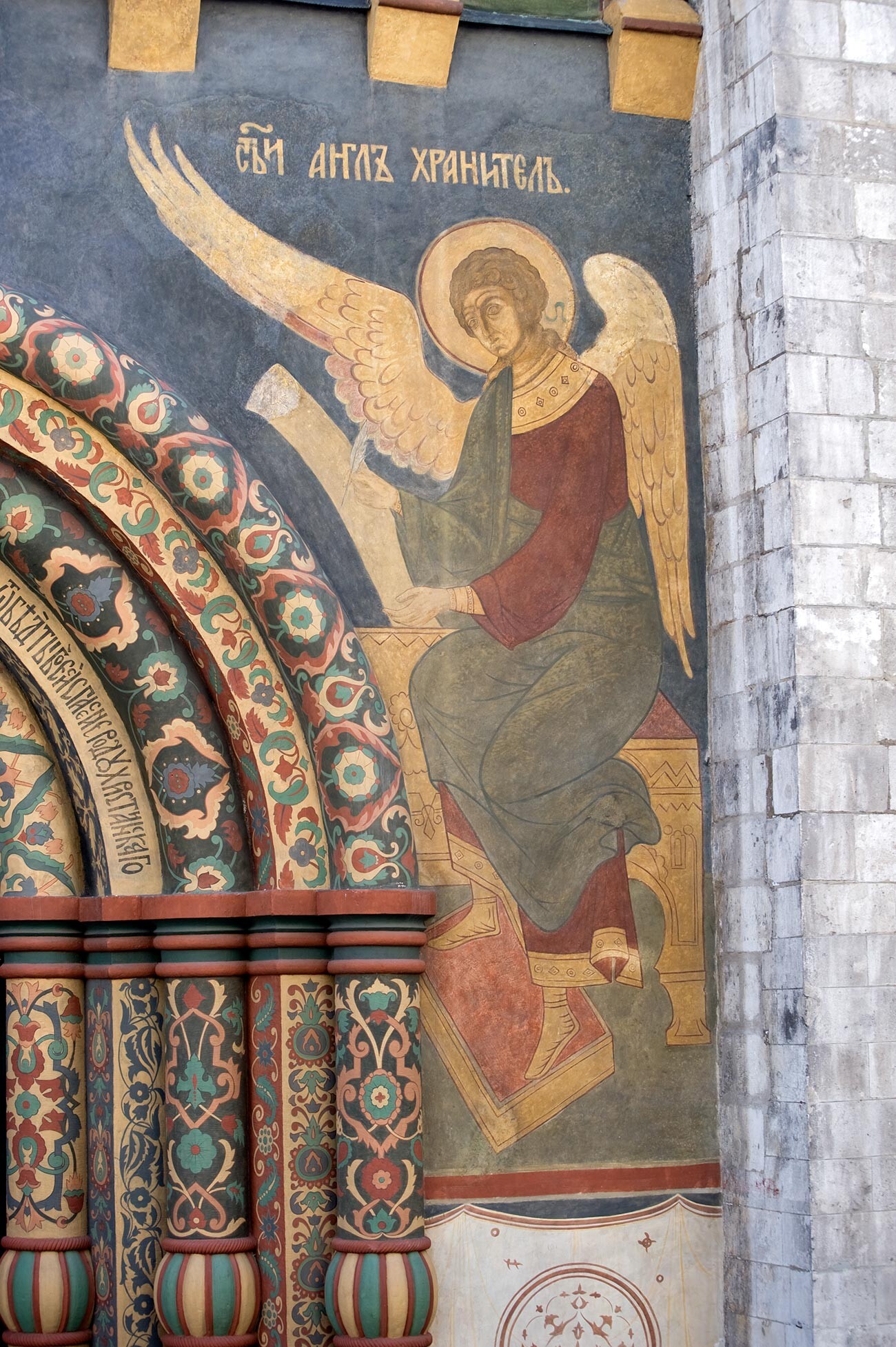 The process of consolidating the central Russian lands around Moscow continued throughout the 15th century. During the long reign of Basil II (1425–62), momentous events in the Orthodox church had far-reaching consequences for Moscow. The fall of Constantinople to the Turks in 1453 increased the isolation of Russian Orthodoxy, yet also reinforce​d​ the mission of Muscovy as defender of the Orthodox faith.

This sense of Moscow as the sole independent Orthodox power was intensified during the reign of Ivan III (1462–1505). ​To enhance Moscow’s new authority, Ivan ​launched a major rebuilding of the Kremlin, including its walls and towers. A ​central part of the project was the reconstruction of the antiquated Dormition Cathedral with the support of Metropolitan Philip, leader of the Russian church. ​ 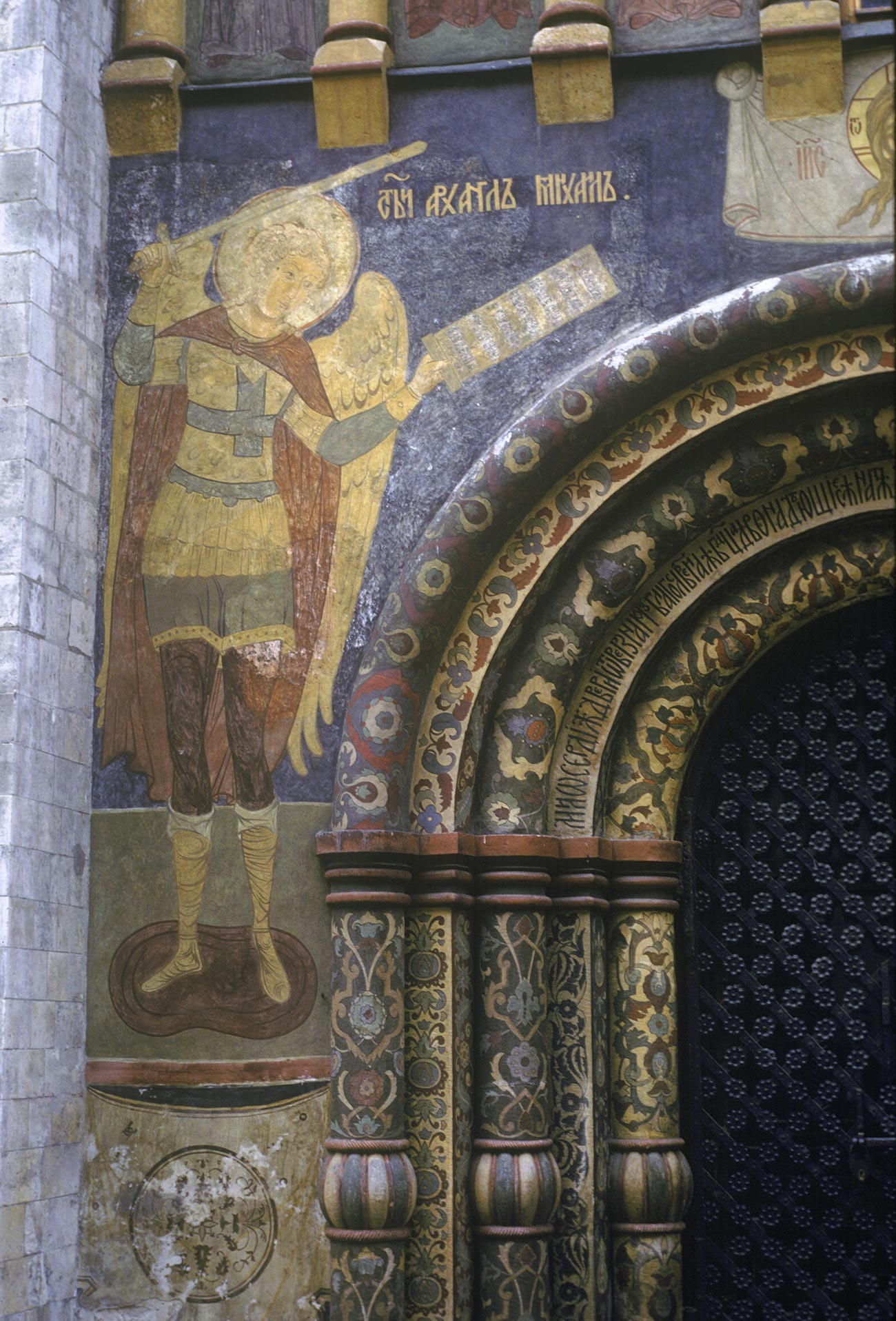 ​Moscow lacked the technical expertise to rebuild the Kremlin, so Ivan hired Italian architects, including the renowned Aristotele Fioravanti, who arrived in Moscow with his son in 1475. Fioravanti was instructed to model his design on the Cathedral of the Dormition in Vladimir​, which he visited​.

Fioravanti incorporated features of the Russo-Byzantine style – particularly the large central cupola, with lesser cupolas at the corners and a blind arcade along the facades. But he also made major innovations such as using stout oak piles for the foundation, complex masonry bonding for the walls, ​iron tie rods to reinforce the ceiling vaults, and large bricks (instead of stone) for the vaults and cupola drums that rested on the main limestone walls.

As if cut from one stone 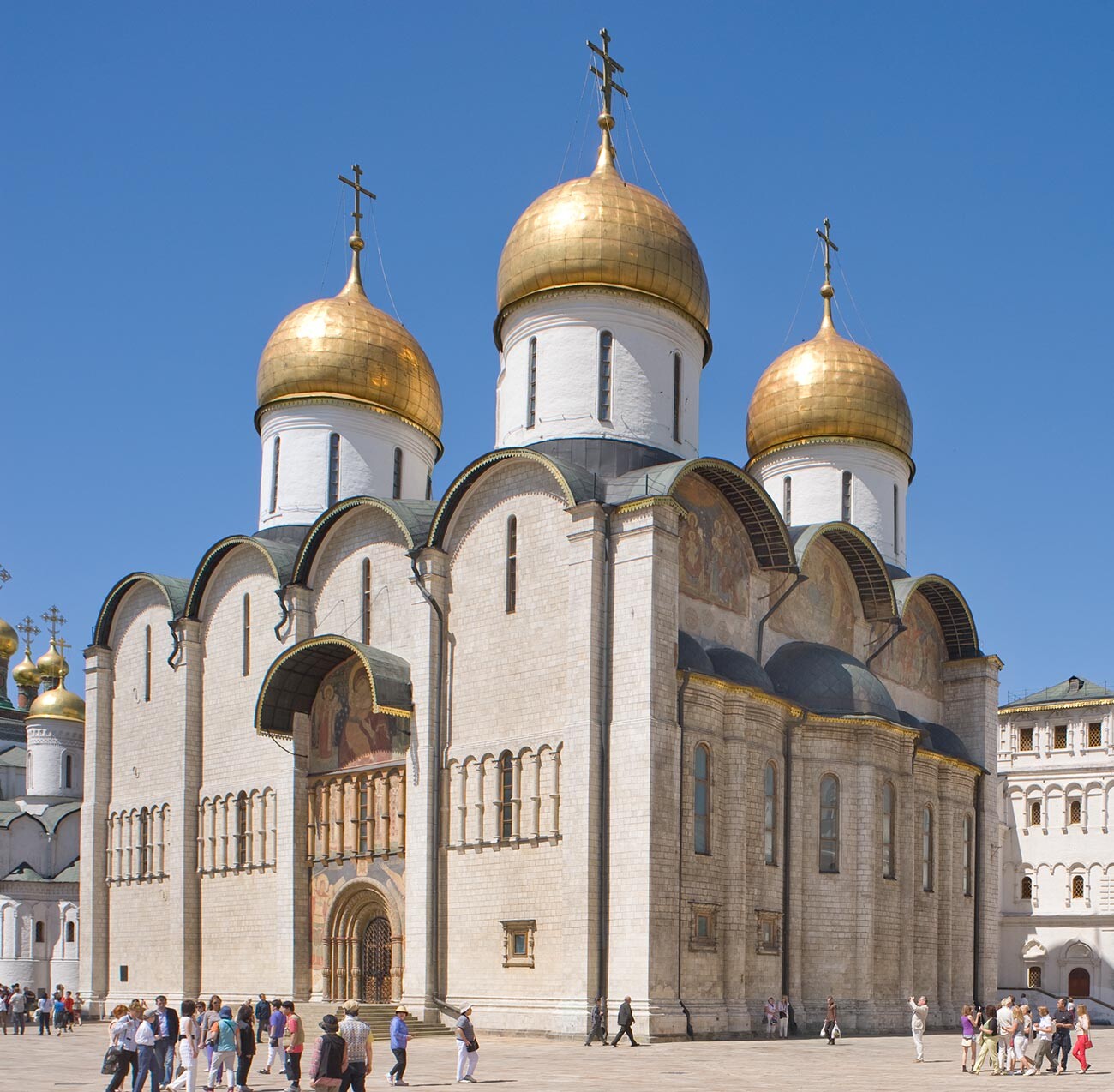 The unity of the sculpted form – as if cut from one stone, according to a Russian chronicle –is especially ​evident in the design of the south wall, the main facade opening onto Cathedral Square. ​​The richly painted arches of the south portal are framed by iconic wall paintings, including the portrayal of saints within the blind arcade.

The south portal is graced with a monumental fresco of the Virgin of Vladimir, Russia's most revered iconic image. Formerly kept in the Dormition Cathedral as the palladium of Russia, the icon is once again on display in the cathedral of part of the year. The sacred image–and the portal–are guarded by representations of the archangels Michael and Gabriel. 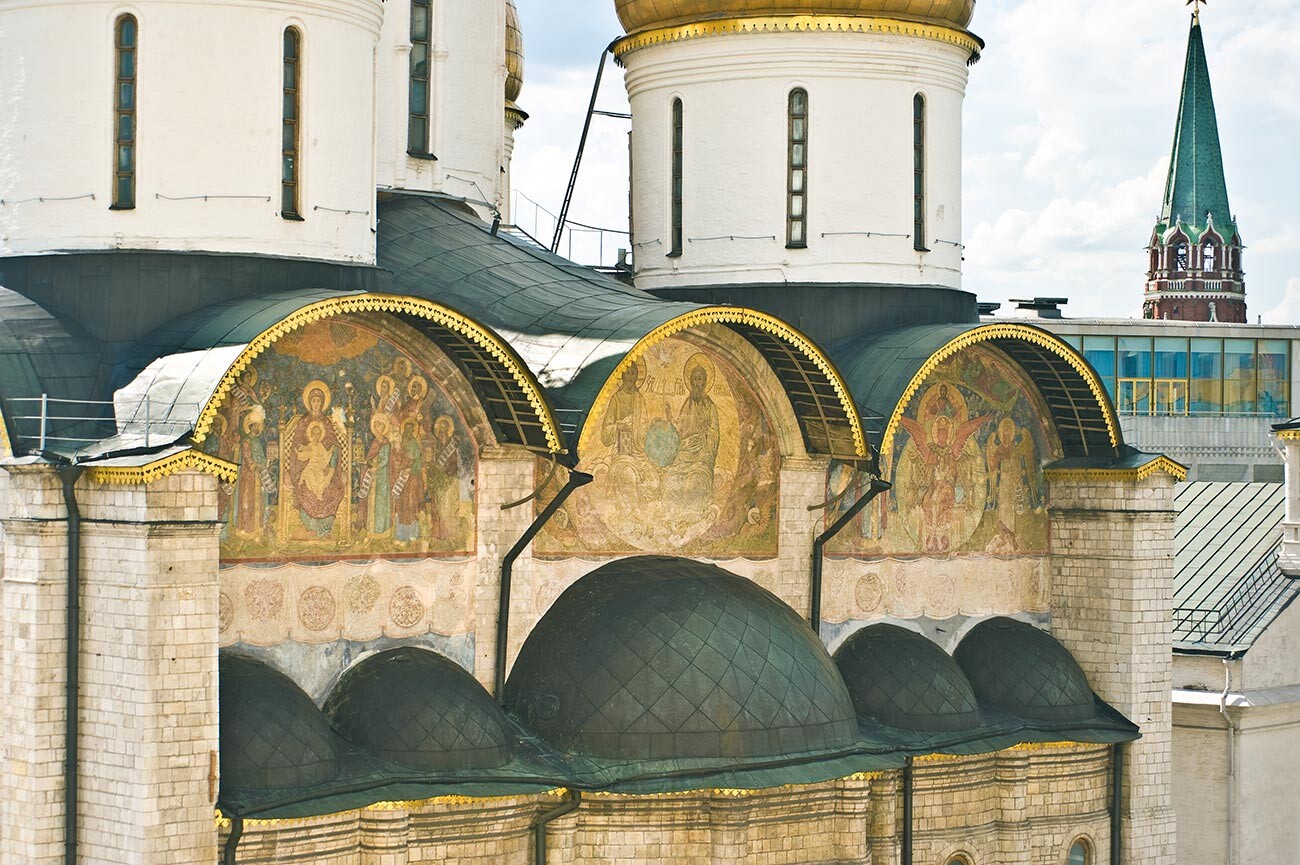 The north wall faced the residence of the primary Russian prelate (now known as the Patriarch's Chambers) and has an ecclesiastical emphasis. The arched frieze above the north portal contains paintings of six venerated prelates representing the far reaches of Muscovite territory, with special emphasis on Rostov, whose Archbishop Vassian was the confessor of Ivan the Great. Above the frieze is a painting of the Assembly of the Apostles (Christ, the Blessed Virgin, John the Baptist and the Twelve Disciples).

The ​intricate ​east façade​​ consists of a five-part apse containing the cathedral altars. Extending slightly from the central block of the temple, the five curved structures are screened by massive pylons at either corner. The façade is unified by large, attached columns and plinth molding to create a monumental form facing the main passage to Cathedral Square.​ 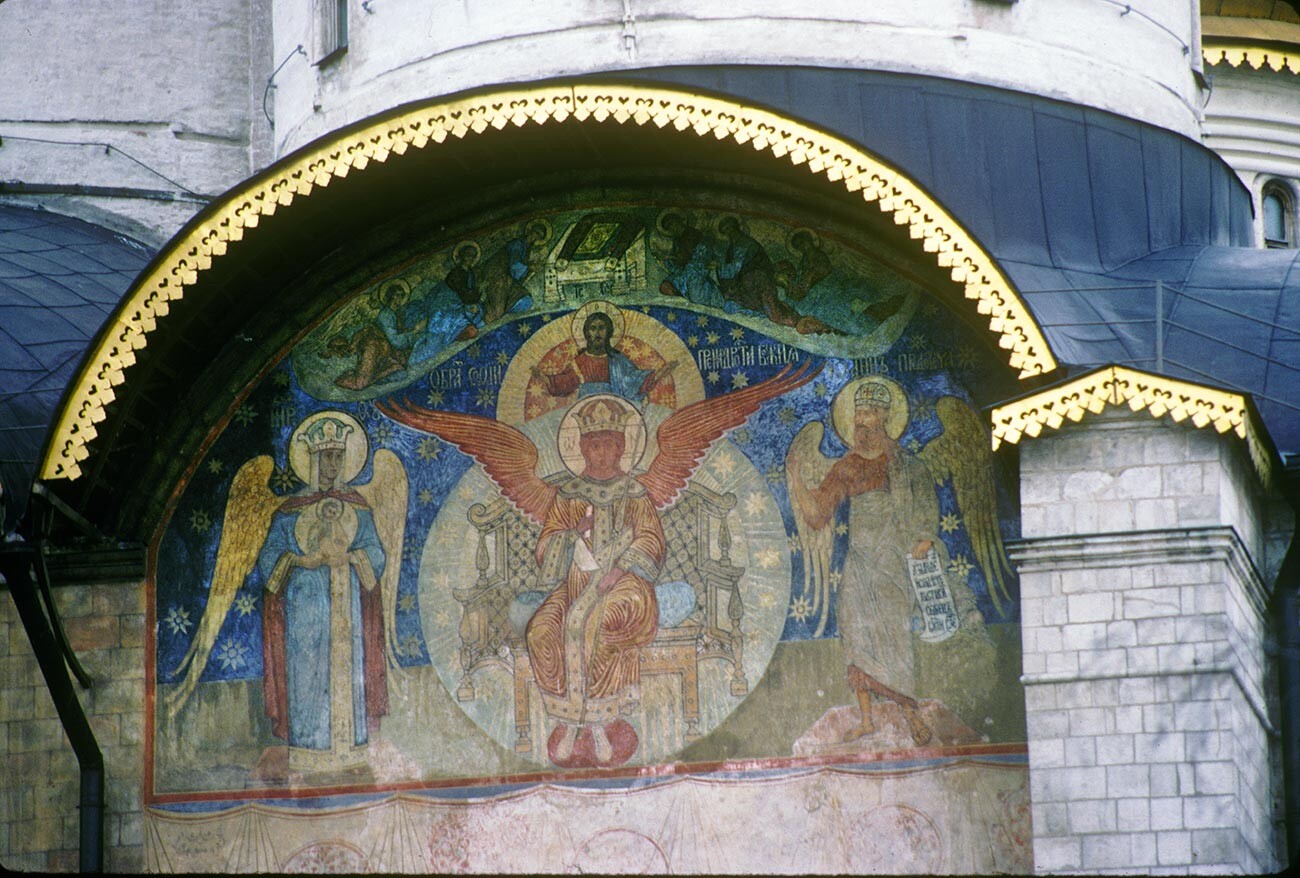 The images on the east wall, which enclosed the altar, are the most august from a theological perspective. Over the central apse is a fresco of the "New Testament Trinity" while the space to the left is devoted to the Orthodox holiday "The Praise of the Mother of God." On the right is a depiction of the Divine Sophia, or Heavenly Wisdom. The main cathedral of Novgorod was dedicated to Sophia, and this fresco reflects the joining of the Novgorod lands to Muscovy during Ivan’s reign. The west façade – which in the Russian tradition was the "front" of the church with the main entrance –was constricted by nearby Kremlin buildings and is less imposing. 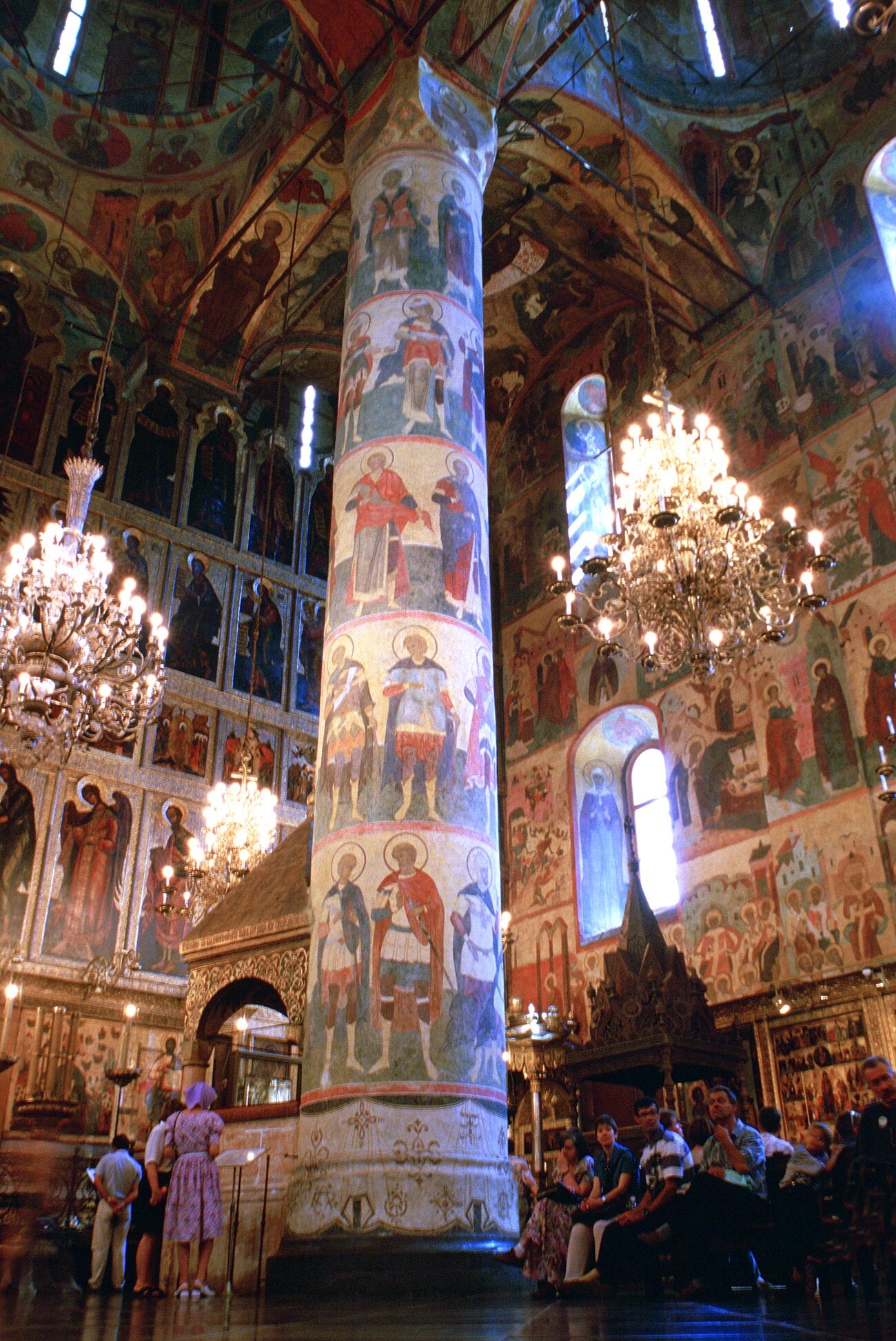 The culmination of the exterior is the ensemble of five gilded cupolas. It is thought that the original domes were made from plates of "German" iron, prepared in Novgorod and polished to a high gloss. After the fire of 1547, the domes were reconstructed and covered with gilded copper sheets, which provide a rich hue to the gold surface.

A grand and solemn space 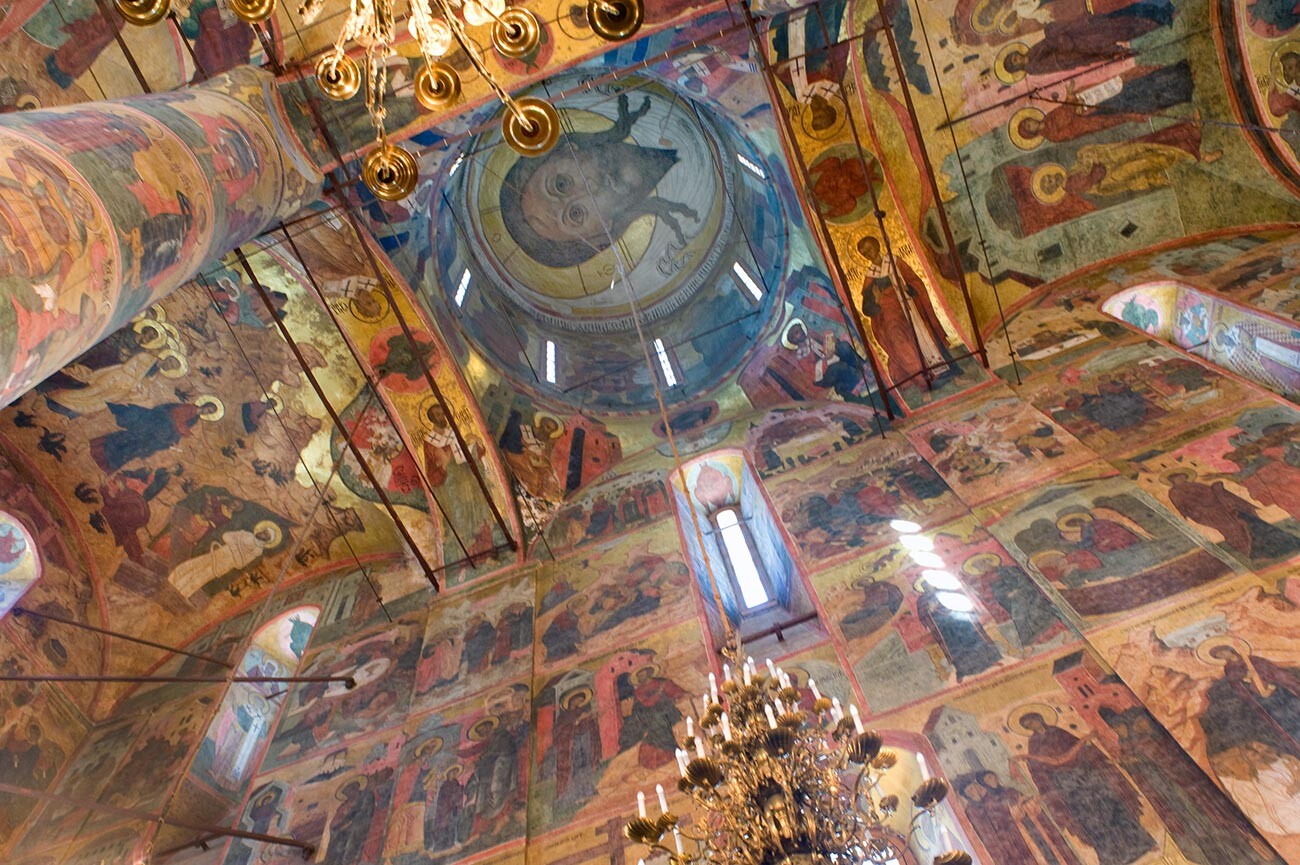 The interior is a marvel of color and openness. Instead of the unsual massive interior piers supporting the ceiling, Fioravanti devised round columns that increased a sense of light and space.

The spaciousness created by Fioravanti's design and technical innovations was enhanced by the decision to eliminate the choir gallery, a traditional element in the design of large Russian churches, thus allowing an unobstructed perception of the main space. From the west façade to the icon screen before the altar in the east, was interior was illuminated with the vibrant colors of the frescoes and icons. 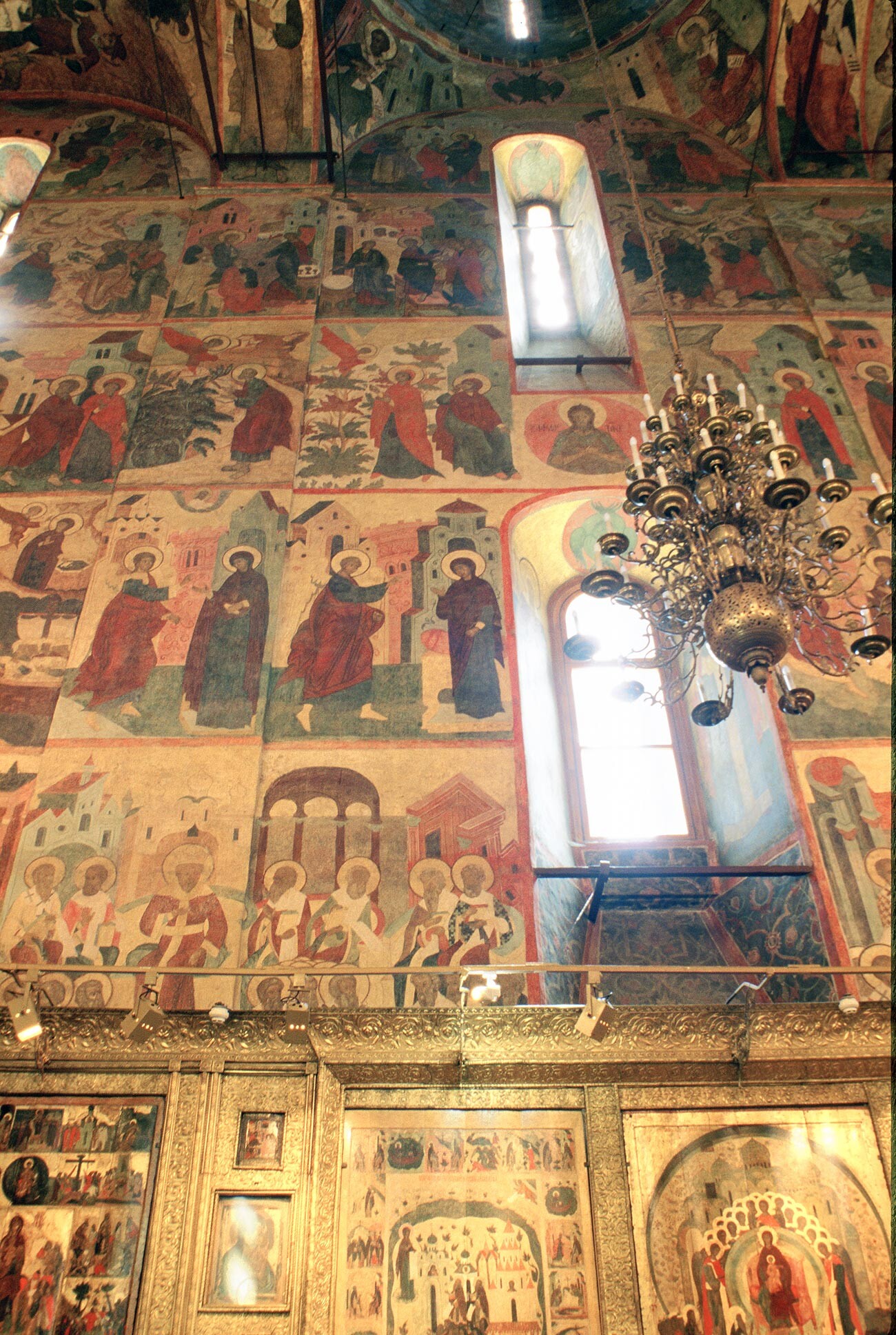 The Dormition Cathedral displays in grand form the Russian Orthodox practice of painting the walls and ceiling vaults with scenes from the Bible and the lives of the saints. The interior of the main dome traditionally displays an image of Christ Pantocrator (Ruler of All). These images integrate​d the structure with the sacred teachings of Orthodoxy. 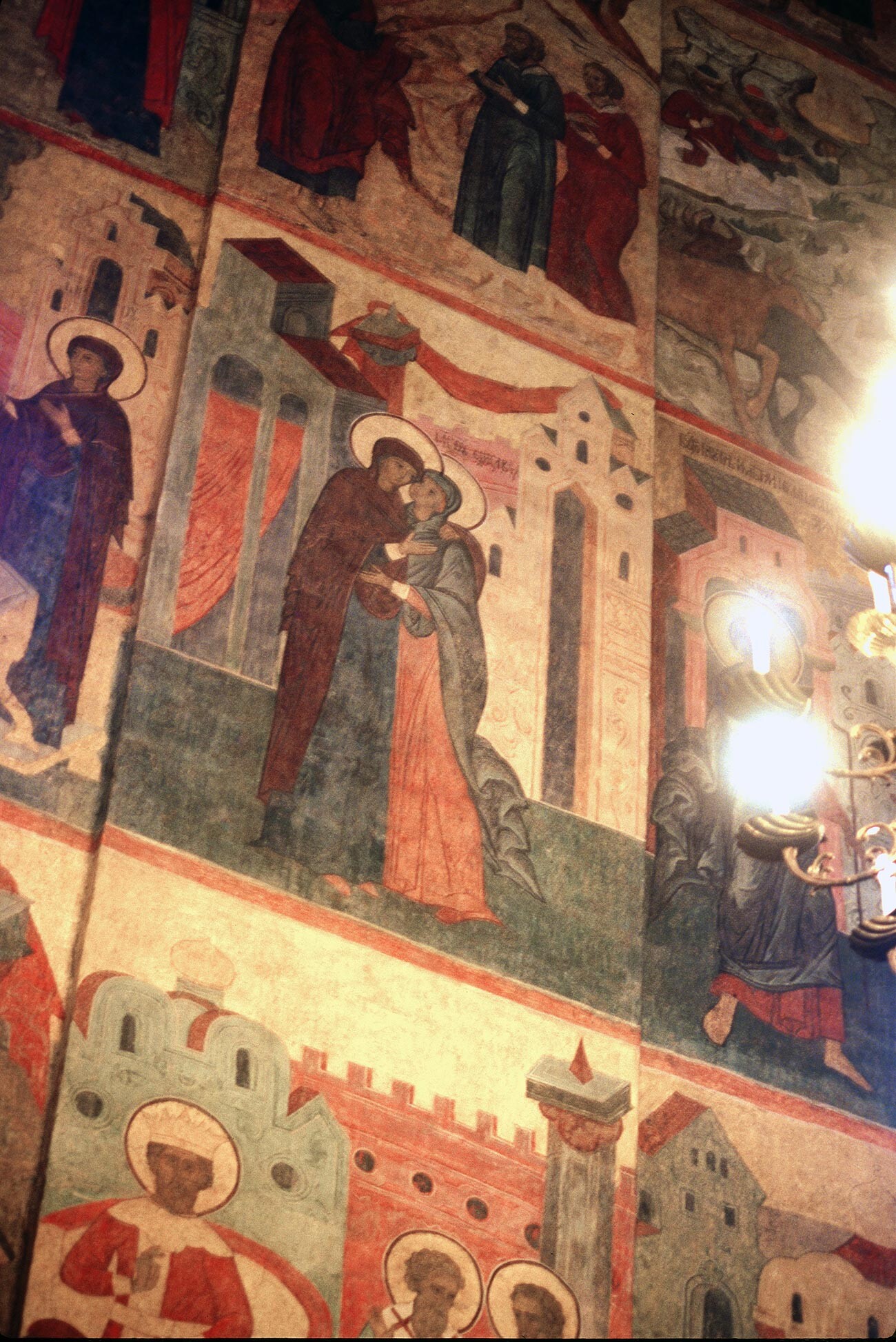 Work on the painting of the interior began ​soon after the completion ​of construction work ​in 1479, and by 1515 the entire space was covered with frescoes. In addition, an icon screen of three rows was painted in 1481 by the renowned artist Dionisy and his assistants, who may also have been involved in the painting of the original frescoes. 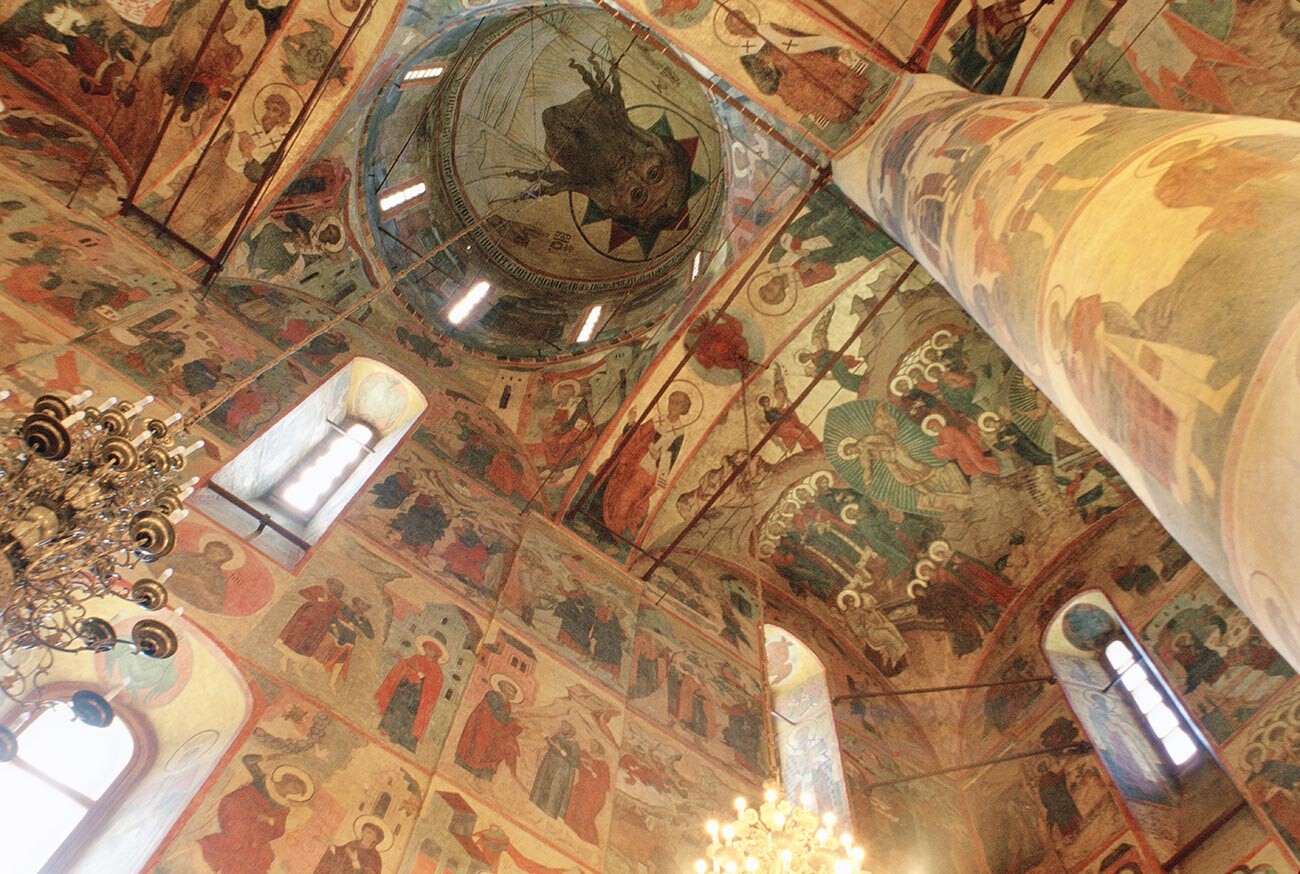 The frescoes were entirely repainted in 1640-42, although they followed the original scheme and contained 249 scenes arranged in rows. The current icon screen was created in 1653, although many of the icons are much older.

Conceived as a grand and solemn space for the crowning of Russian rulers and the investiture of metropolitans (later patriarchs) of the Russian Orthodox Church, Fioravanti's Cathedral of the Dormition represents the felicitous meeting of two cultures, Russian (with its Byzantine heritage) and western European as expressed in through the spirit of the Italian Renaissance. 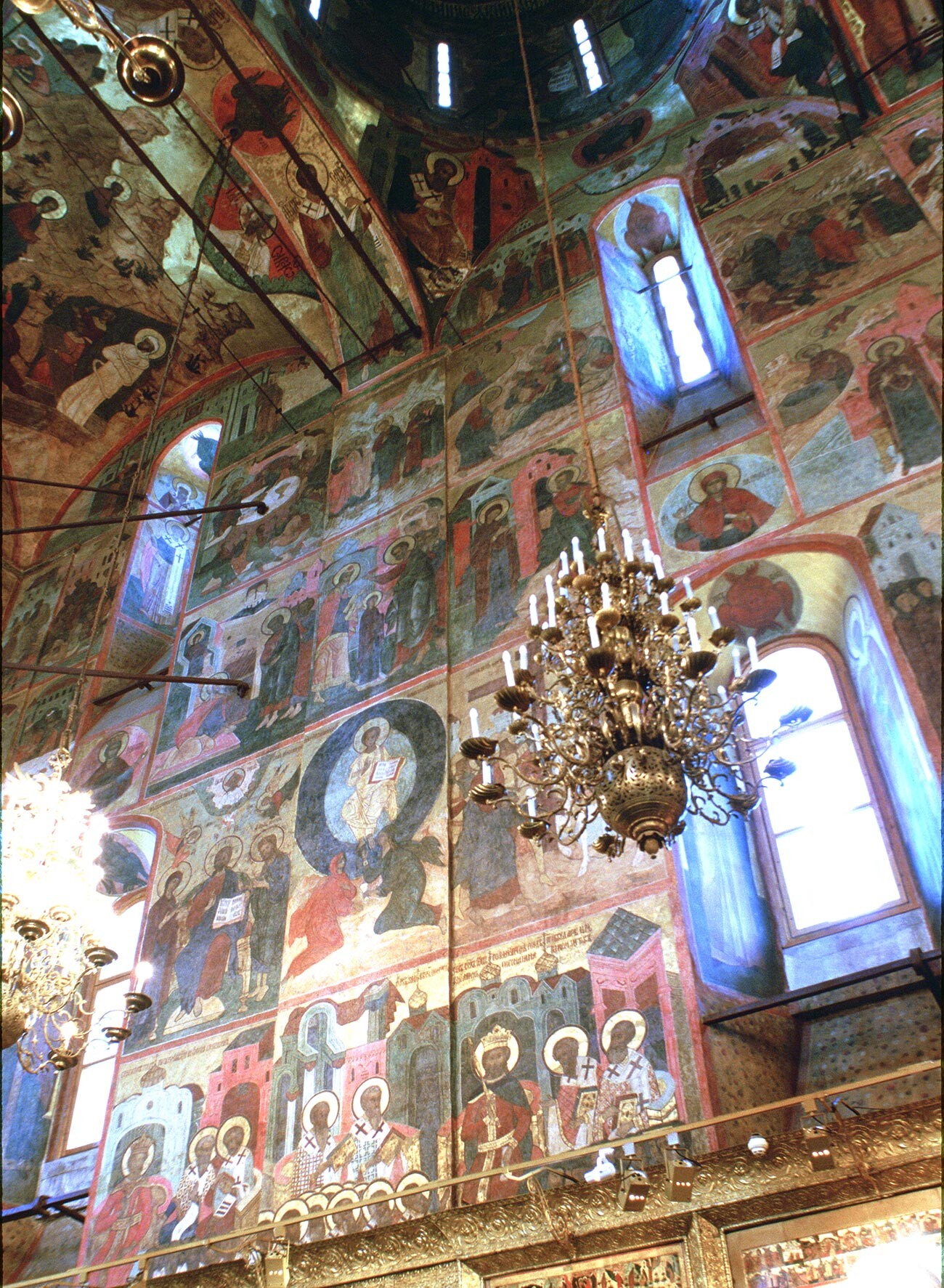