What did a Soviet bad boy carry in his pockets? (PHOTOS) 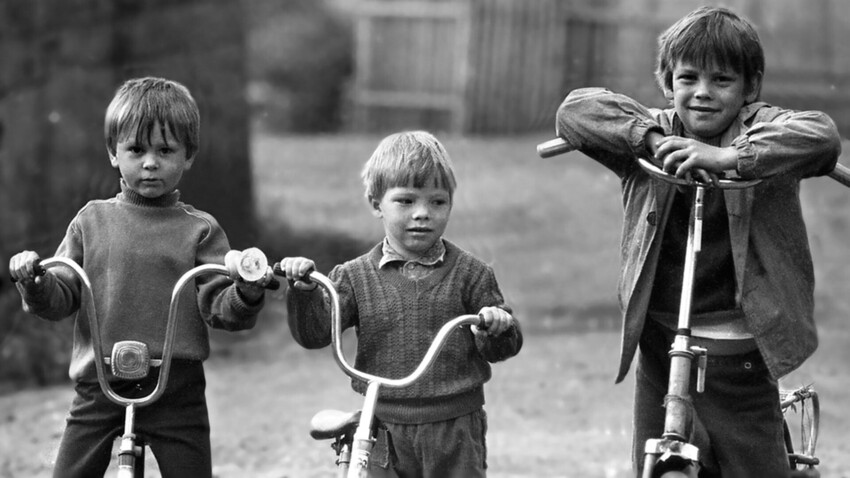 https://russiainphoto.ru/
Not just coins or pencils or even a pioneer tie – nothing from the boring world of school! We look at the items that accompanied the free, unsupervised life of a Soviet schoolboy... 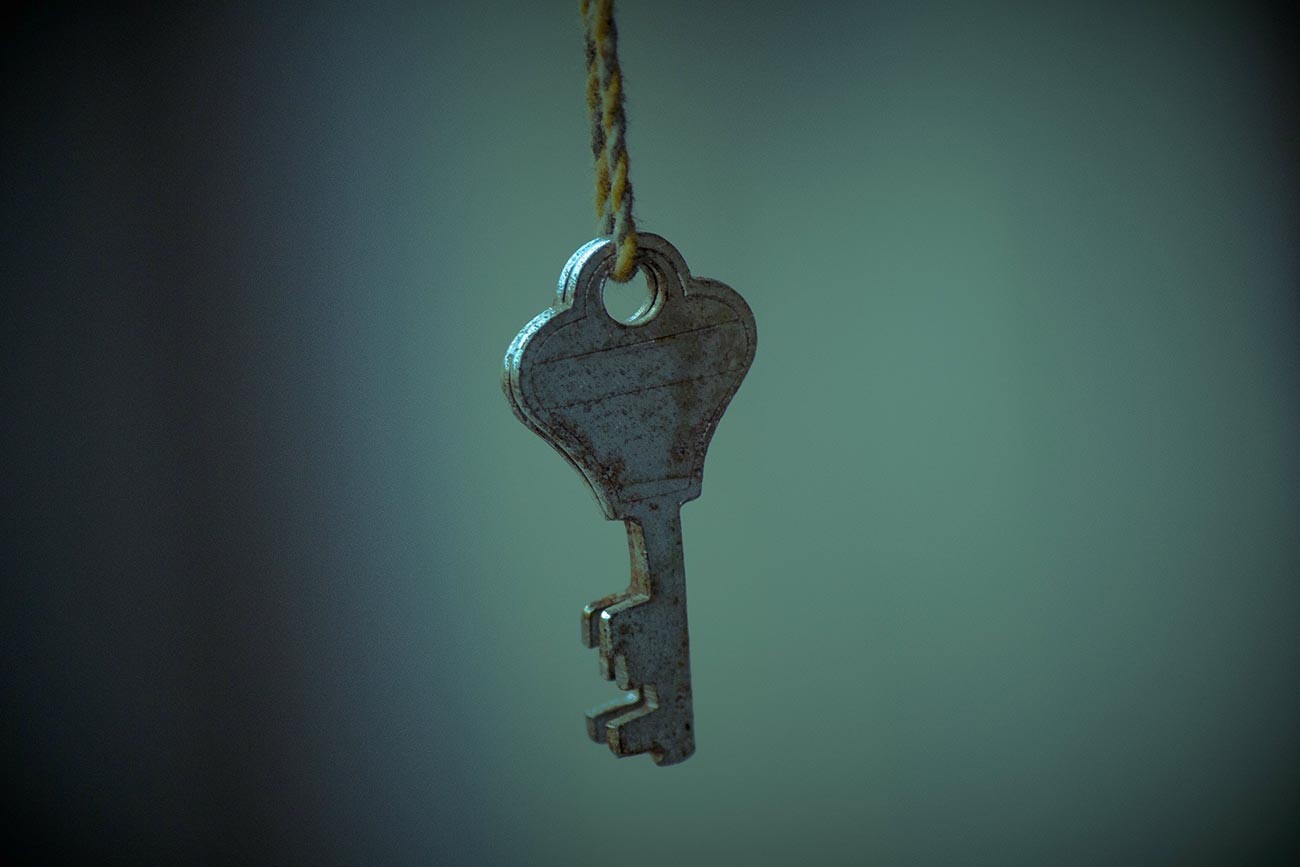 One of the most precious possessions of a Soviet schoolboy was a key to his apartment, hung around his neck on a string. It was necessary to enter the apartment after school, since most parents worked until the evening.

Both boys and girls carried it because they participated in active games and fights and it was easy for them to lose the key if it would just lie in his inner pocket. Changing locks after that was a painful and expensive business, much to the displeasure of parents, because a lost key led to concerns that a thief might find it, so every morning boys would hang a key around their neck and go to school.

Sometimes, a special pocket for the keys was sewn on the inner side of the school uniform. However, all the tricks of parents to keep the key to the apartment intact sometimes were useless. The key, often heavy ( old Soviet locks were bulky), was also often played with, in a kind of analogue of petanque (boules). One needed to twist it over one’s head (that’s when the string comes handy) and throw it in the direction of the control line. Whoever got closer to it won. 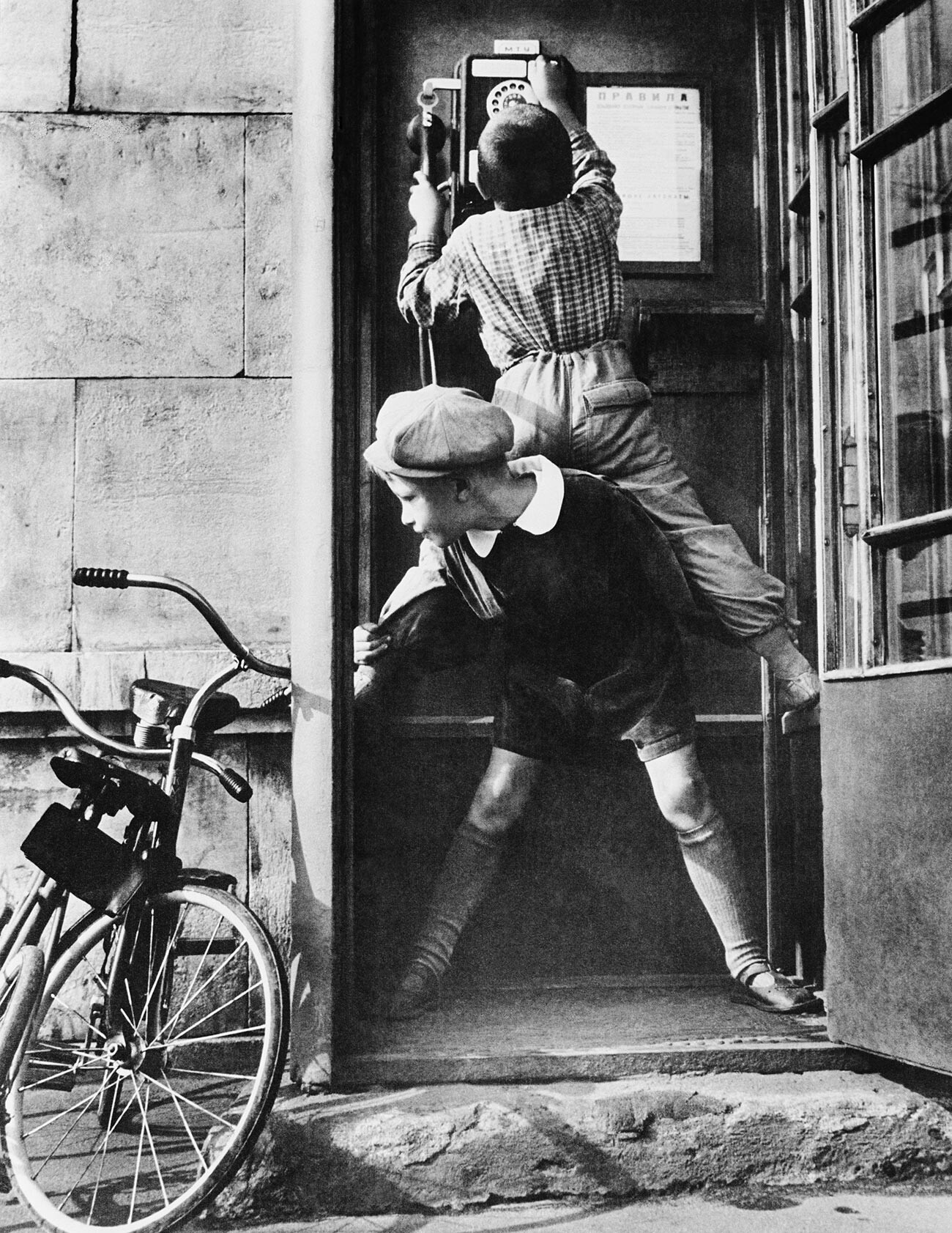 Boys calling from a payphone, 1960

A two kopeck coin with a hole through which a string was inserted – a little trick that made it possible to make free calls at a payphone. One had to put a coin in the slot, and when the call was over, gently pull it back out, thus saving yourself money for ice cream and other schoolboy pleasures. 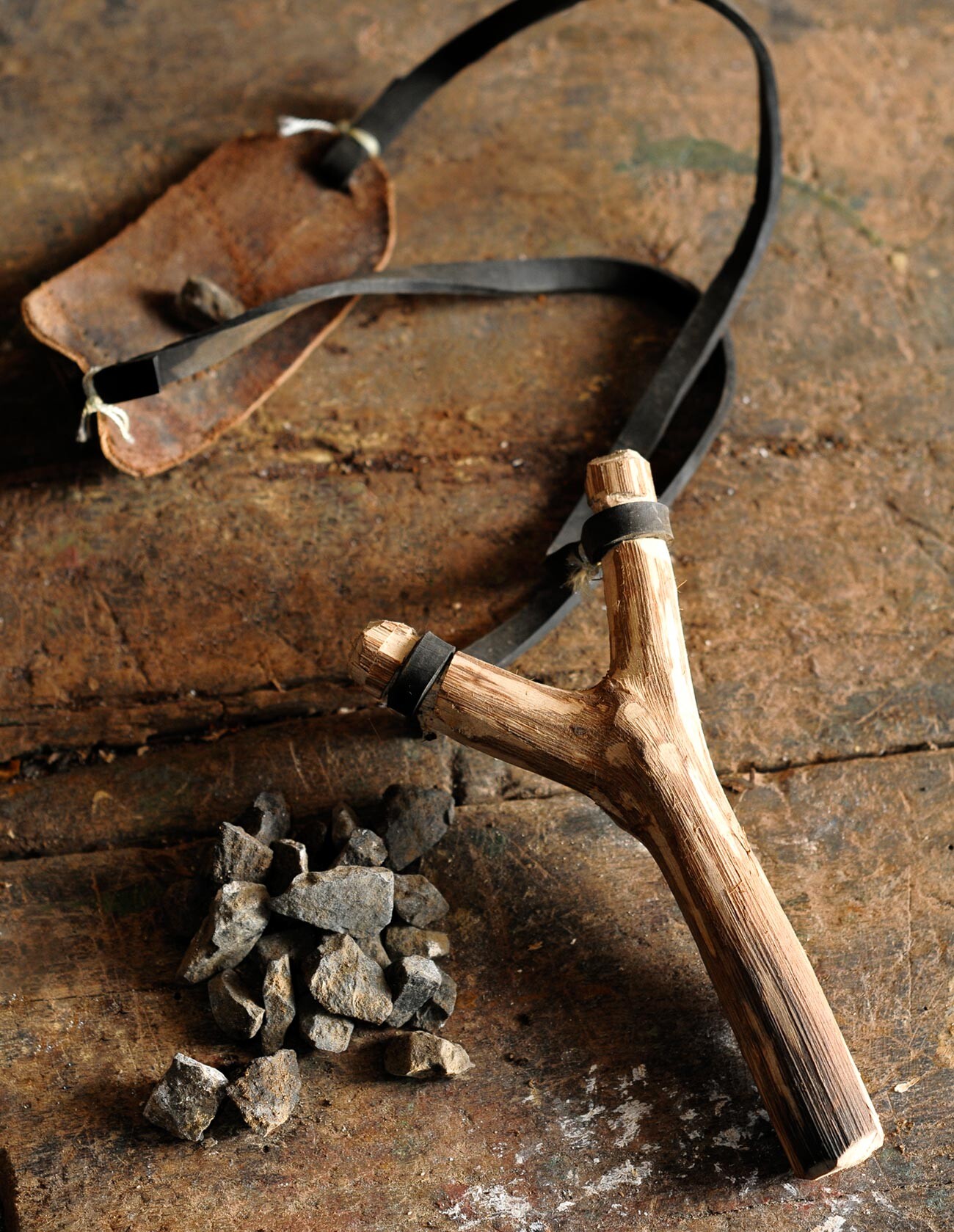 A real Soviet bad boy, of course, had to carry a slingshot and a set of so-called “bullets” for shooting: small stones or short pieces of wire bent into a U-shape. The slingshot was made most often from a bifurcated branch of suitable shape and wrapped with insulation tape. A band taken from underpants or sweatpants was usually used as a tensioning element.

The slingshot was far from a harmless pastime, as you could easily get an eye injury, a black eye or an abrasion as a result. In harsher, rural areas, the slingshot could also be a means of hunting sparrows or even pigeons. 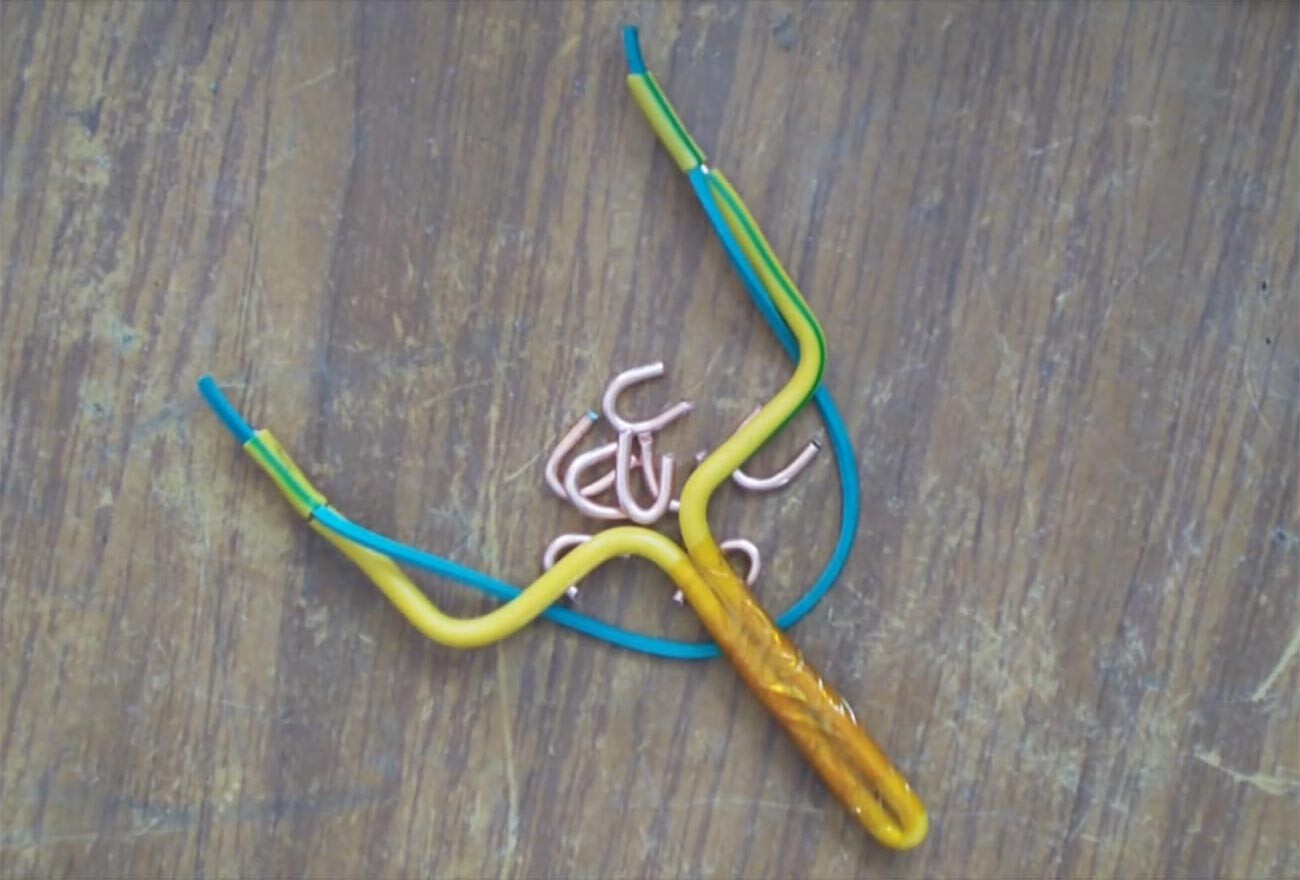 A pocket slingshot made from aluminum wire, and some U-shaped projectiles.

A growing organism demanded food, but it was dangerous to go home – what if the parents wouldn’t let the little brawler back in, make him do homework, or make him clean up or sit with his little brother? Therefore, birds plucked and roasted at the stake were sometimes eaten straight away. That is how Soviet school children developed survival skills.

Such a daredevil pastime attracted not only the more free-spirited village boys, but also the well-to-do “proper” pioneers brought in for the summer vacation in the countryside dacha. They learned independence and rules of life from the village boys by making slingshots, stealing apples from the neighbor’s orchard and learning foul language. 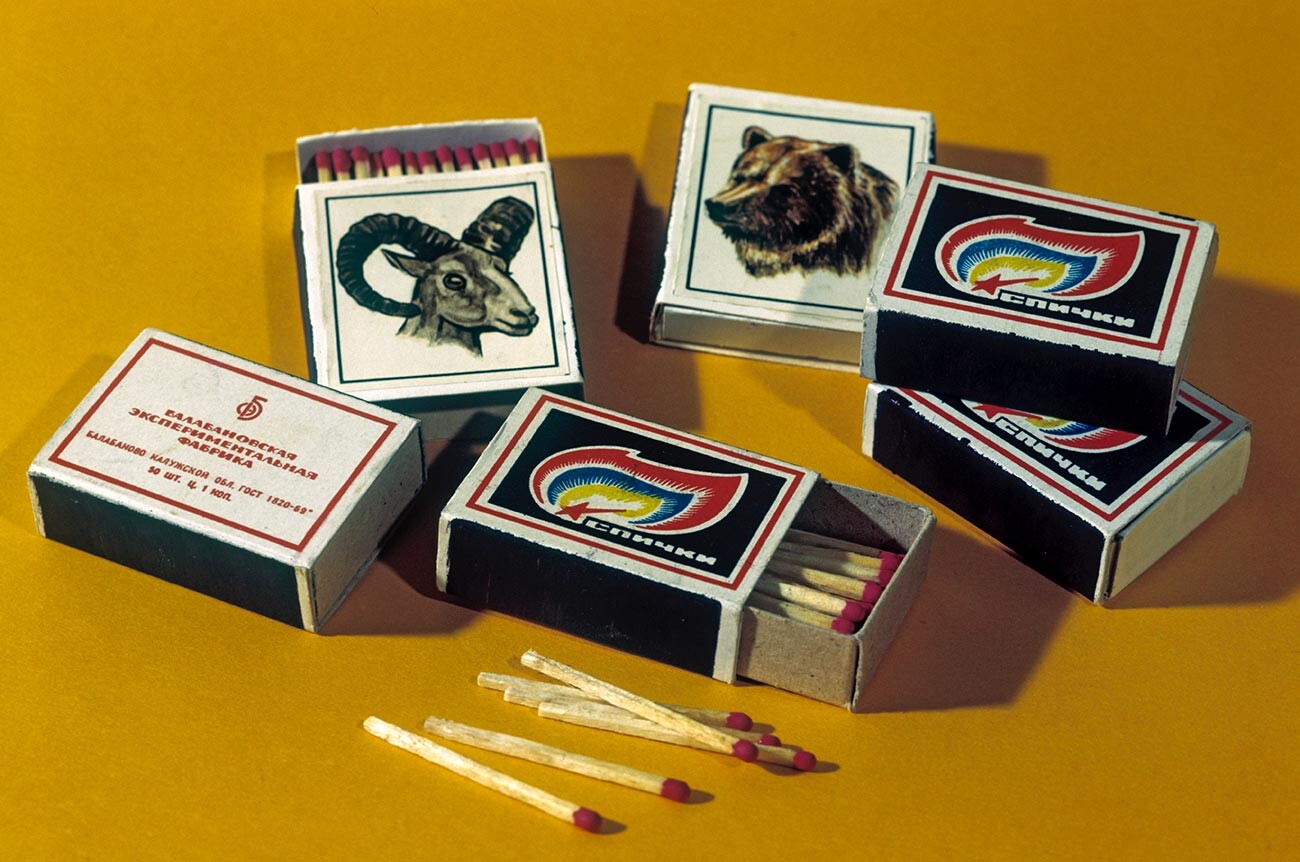 In order to bake potatoes (taken from the house or stolen from the collective farm field) in the ashes of a fire, a kid needed matches. Matches were also cherished for their aesthetic value. For example, matches with green heads were considered cooler than the usual brown ones. The drawing on the box was also important. In late Soviet times, souvenir matchboxes with girls in bathing suits were brought into the country and such boxes were very highly valued among the boys.

Also, the matchbox was an ideal place to keep beautiful bugs, spiders and caterpillars. They could, for example, be shoved down the dress collar of the girl sitting at the desk ahead. The effect was beyond all expectations. 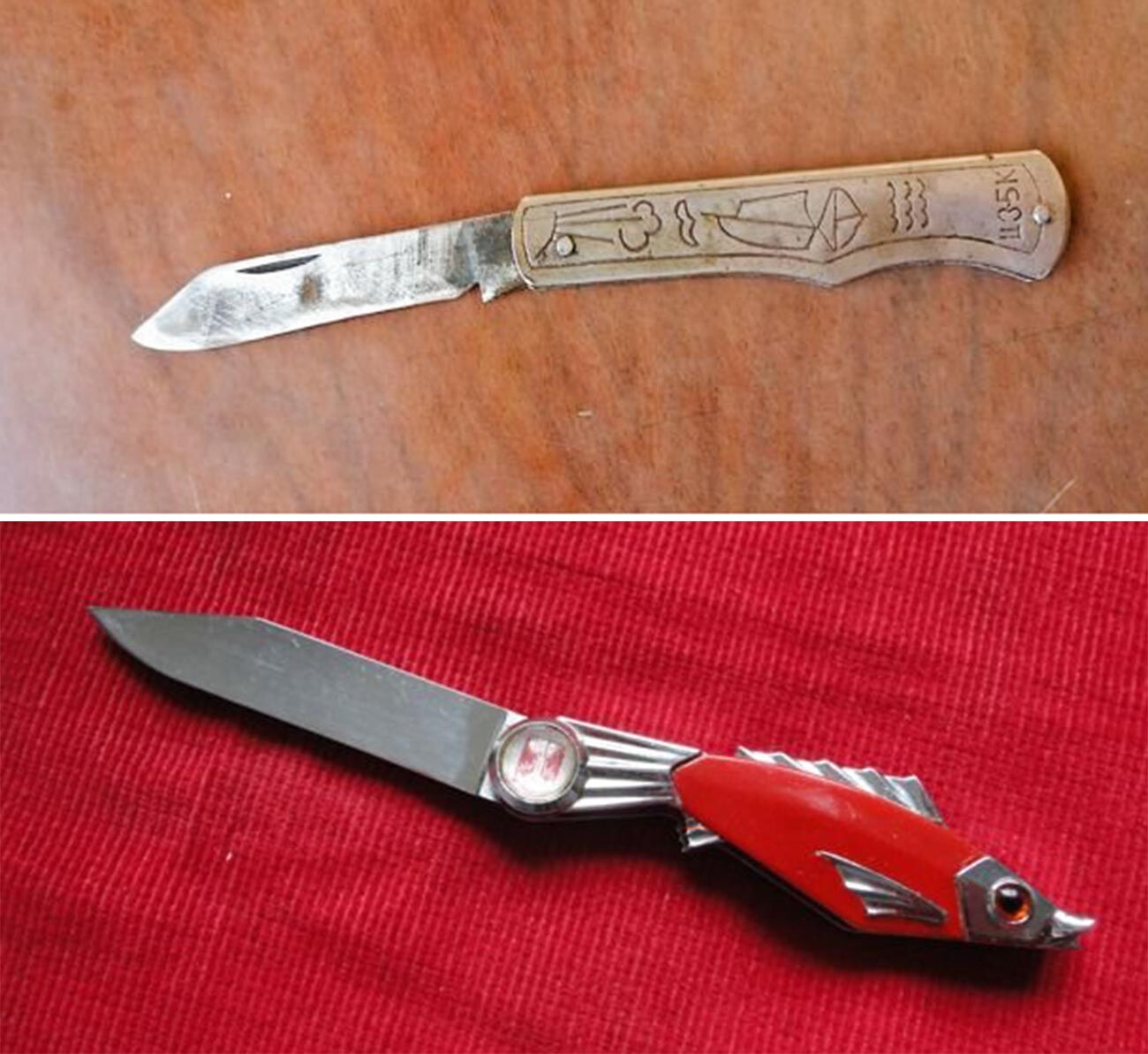 Due to the fact that boys spent most of their time outside of school on the street, it was “mandatory” for them to carry a penknife. To cut an apple, to gut a caught fish, to hack out a dart – you never know what else a Soviet kid might need it for.

The simplest knife had the dismal name ‘Shkolnik’ (“Schoolboy”) and a dull blade. However, this was quickly solved with a sharpening stone or even a stair step in the entrance hall.

More expensive knives, such as ‘Tourist’ or ‘Fish’, had bright colored plastic handles with decorative embossing. But most appreciated were folding knives with a large assortment of other gadgets; in addition to the knife blade, there were also wire cutters, scissors, hunting tools and a special chic – a corkscrew. In short, a Soviet Swiss Army knife knockoff! 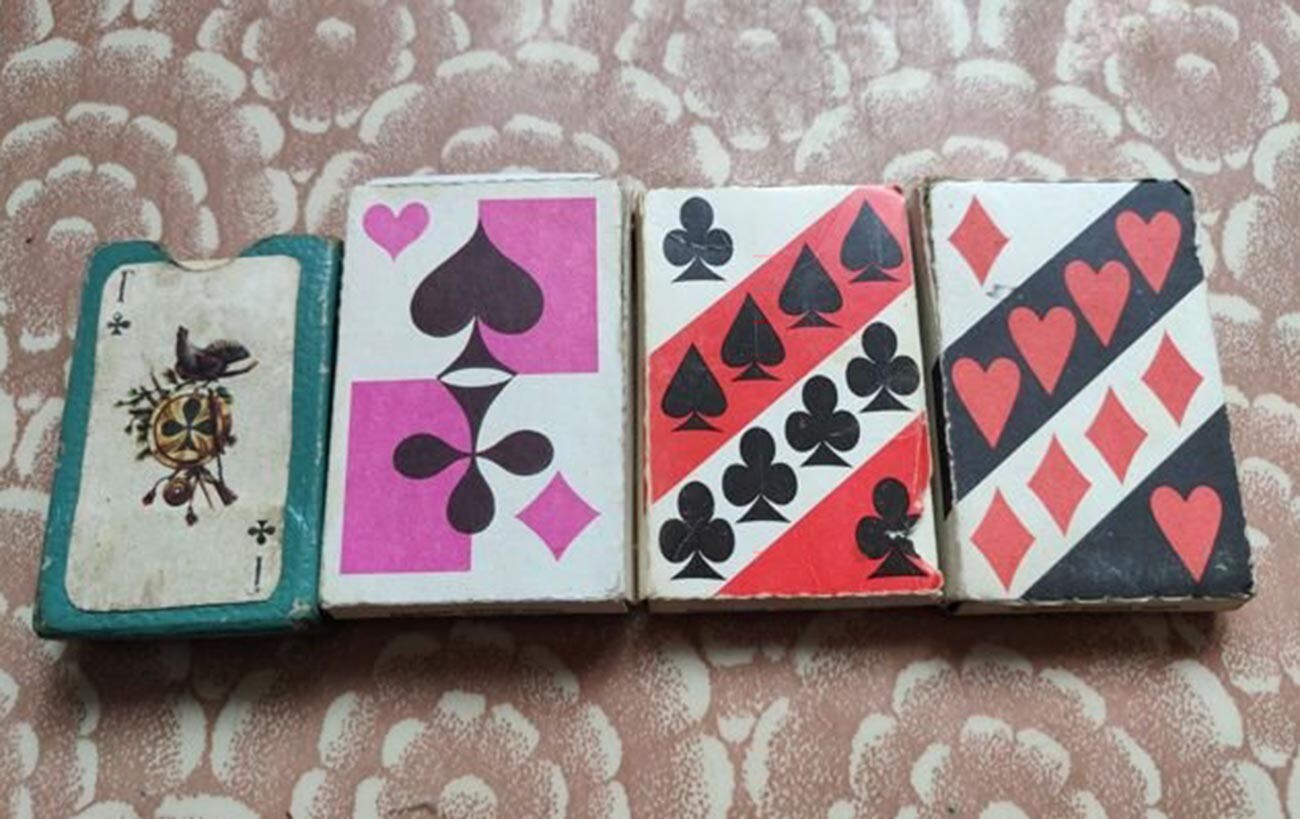 A penknife could be lost or won at cards. Only the most badass Soviet kids carried cards with them. After all, they implied gambling and tainted with a criminal veil.

Gambling with money was a criminal offense in the USSR. A teacher, noticing a pupil’s deck of cards, would immediately confiscate it or even ostentatiously rip it up. At school, cards were played at recess under the stairs or in the toilets, but, more often, the games were played outside school, in alleyways and other places where there was little risk of being caught by adults.

The most innocent loss in the game was a flick, and so, most often played for change, sweets, small material values. Playing “out of interest”, that is, just for fun, was rare – it was considered a fake children’s game. The older a kid got, the more serious the stakes became. 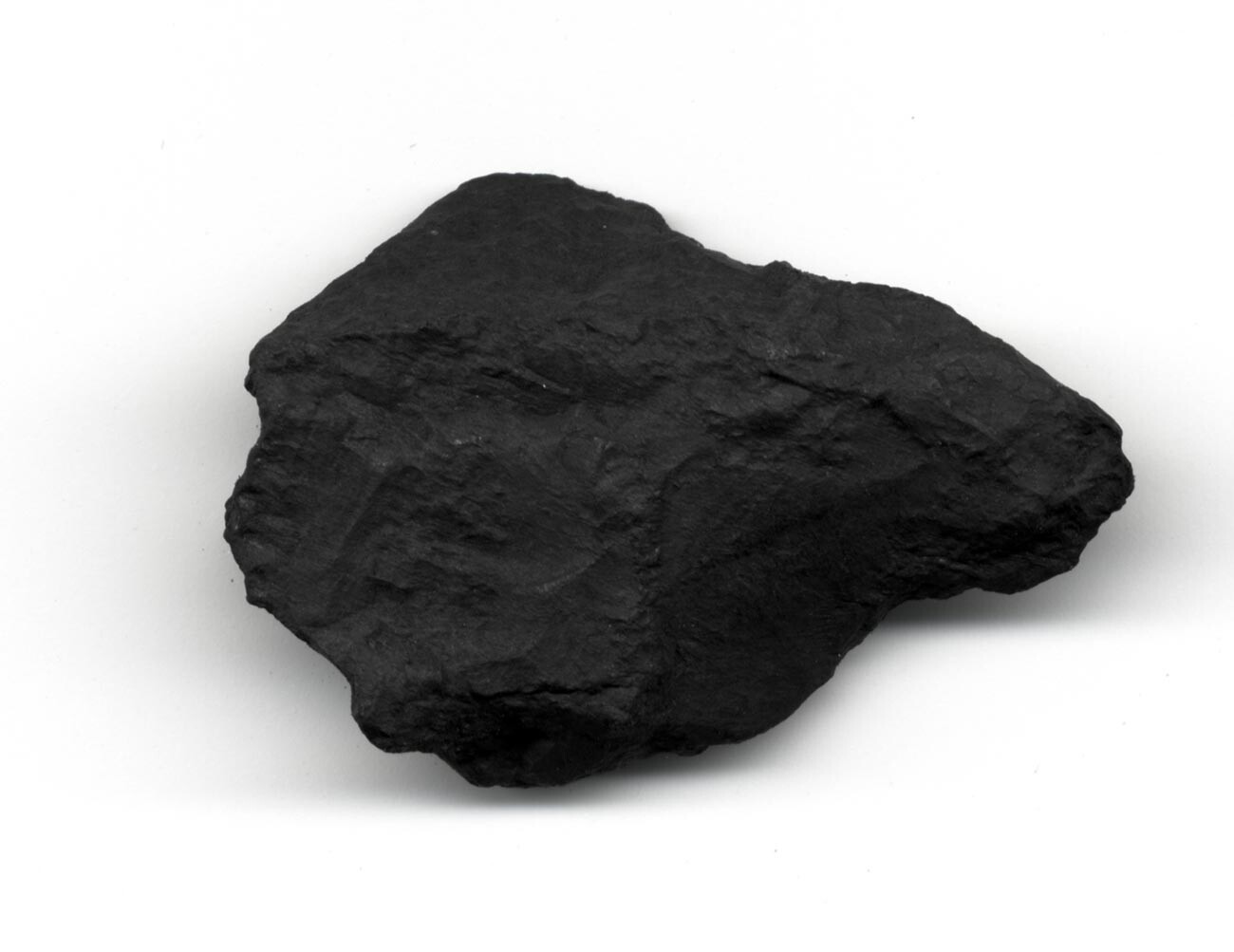 A piece of tar. Imagine how badly someone should want a piece of gum to CHEW this?

Often, a badass Soviet kid had with him a harsh Soviet “gum” – a piece of tar. Tar is a black viscous mass, a waste product of oil distillation. It could be found at construction sites, repairing pipes and building roads. When it solidified, it turned into bitumen, which was torn off and chewed up bit by bit by the boys (and the most badass of the girls, of course).

Tar was believed to whiten one’s teeth and it also gave you the fashionably serene look of a gum-chewing foreign bad boy. Tar had a unique texture: after you managed to chew it to a soft state (which could take up to half an hour), it retained the plasticity of real gum for a long time. It was also believed that chewing tar was good for ridding the smell of tobacco from clandestinely smoked cigarettes. 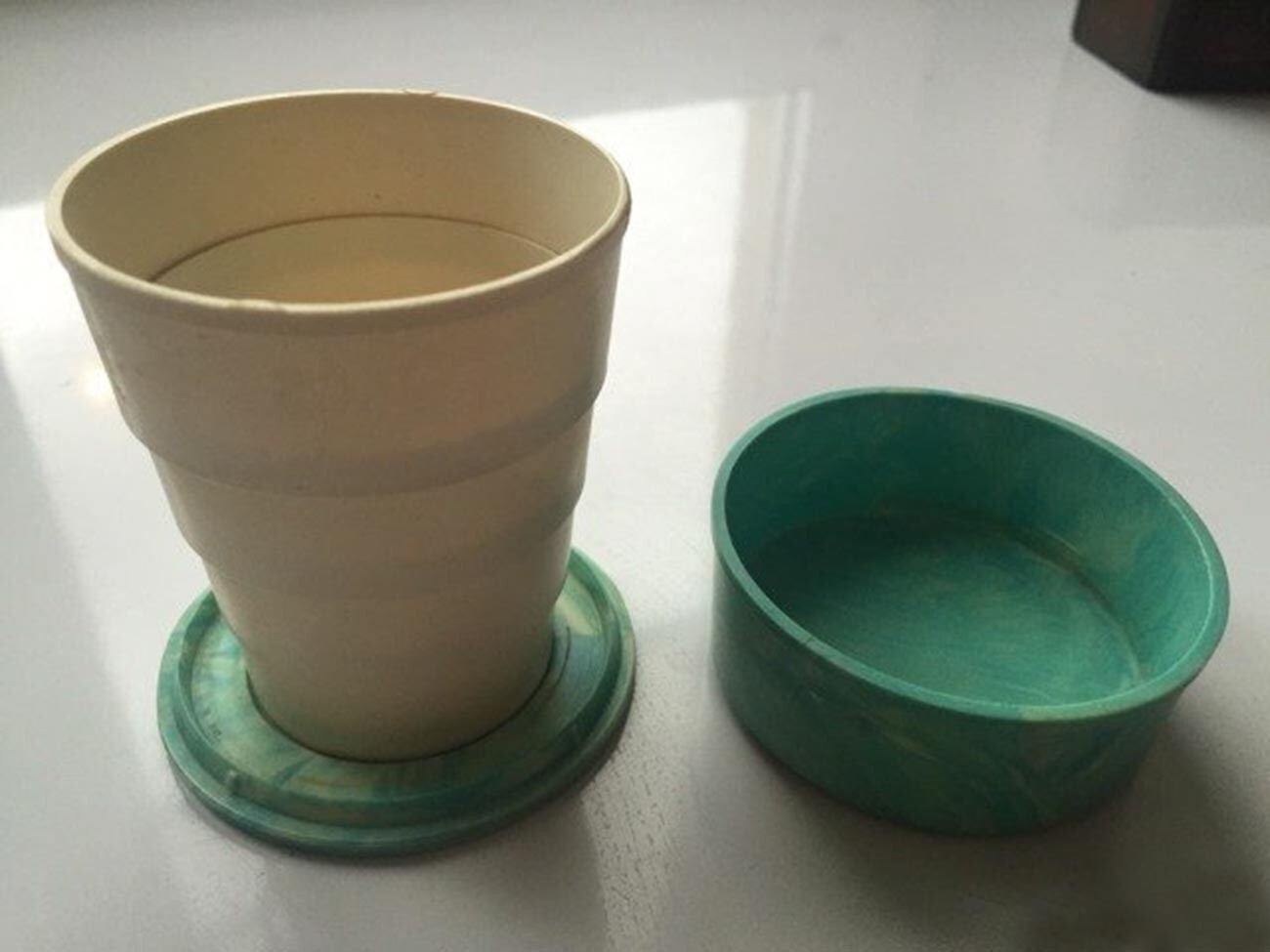 A foldable plastic soda cup was an absolute necessity during the stuffy city summer. Glasses in vending machines with fizzy drinks, that could be sweetened with cherry or pear syrup, were mostly absent. Usually, they were stolen by drunks. So, a personal foldable cup meant access to a tasty drink – otherwise what would you pour soda from a vending machine into? 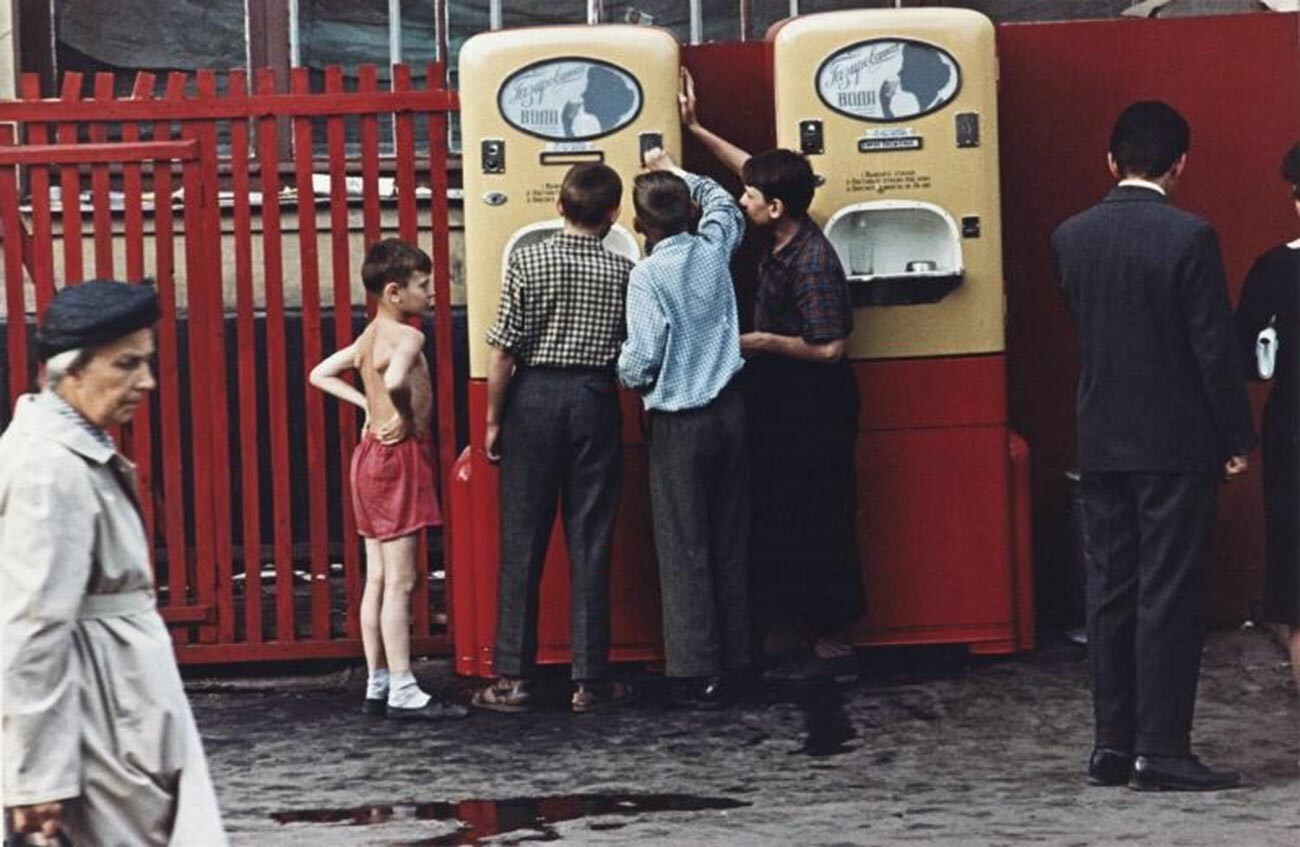 Boys at a vending machine selling soda with syrup.

They were also often bought for their children by squeamish mothers who mistrusted the public dishwashing systems. Urban legends of syphilis-infected creeps who walked around at night and rubbed their ulcers on the glasses also added to the scare. The foldable cups were not quite handy, because they could fold up as you poured the soda, so you had to hold them by the top edge and then lick your fingers, sticky with syrup.