How 2 hippos were rescued with drugs and vodka (PHOTOS) 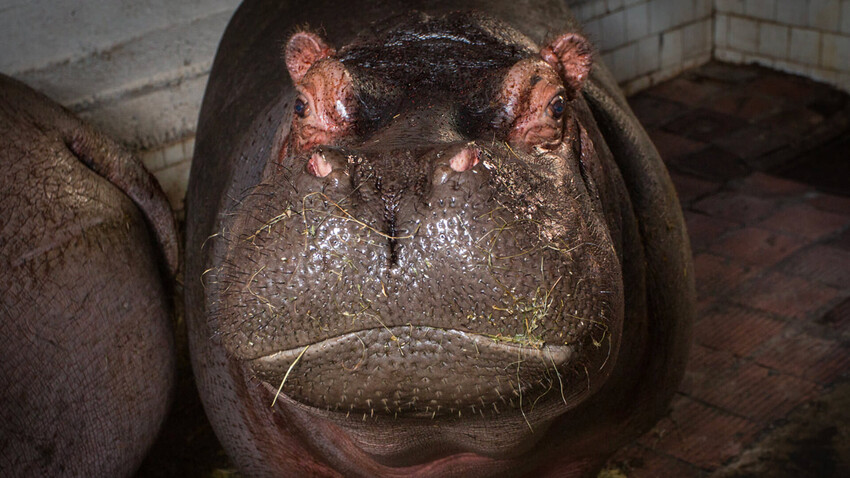 Kaliningrad Zoo
It so happened that Gans and Glyasik both lived at the Kaliningrad Zoo. And although they lived in different times, both had to face some very difficult situations.

The Kaliningrad Zoo has its own totem - the hippopotamus. Few would argue with the choice of animal if they knew the story behind it. Start with the fact that the hippo survived World War II (only four animals in the zoo’s history ever have). Secondly, the female gave birth to 25 offspring, providing nearly every Soviet zoo with its own hippo - for which she was even accepted into the ranks of Kaliningrad Region’s multiple-child mothers).

But the Kaliningrad hippos had their fair share of hardships: two of them - Gans and Glyasik - survived what can only be described as a thriller movie plot in real life.

Hans was saved only by vodka

Gans was the first hippo ever seen by Soviet transplants when they relocated to Kaliningrad. When, in 1945, the Red Army took Koenigsberg (the city’s German name), they discovered three animals who had survived in the rubble of what remained of the city’s zoo - a doe, a badger and a donkey. But moments later, while searching through thickets, they found what they first thought was a very large pig. 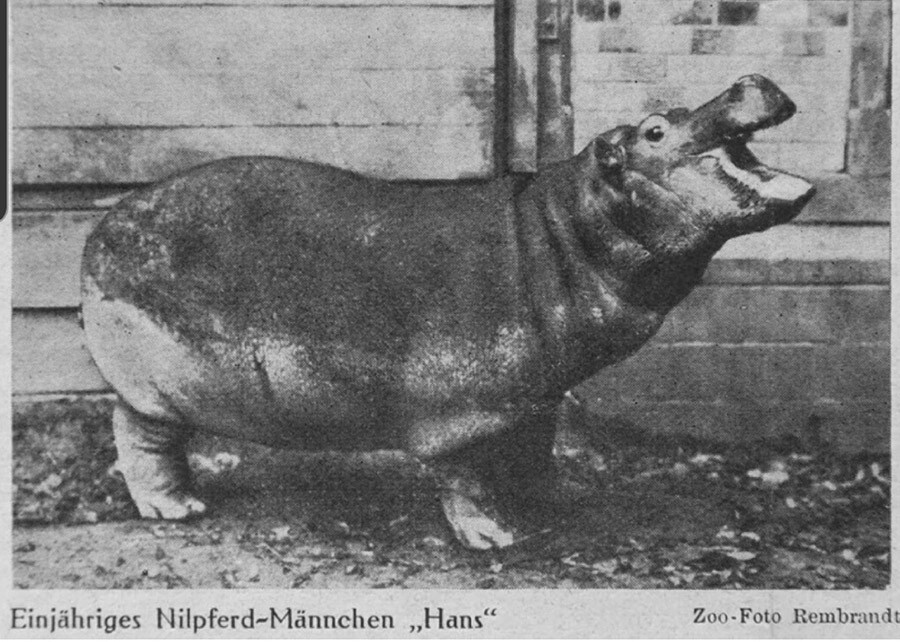 A pre-war photo of Hans

Terrified by the sound of the bombing, the hippo smashed through the enlosure and hid in one of the zoo’s gorges. There, he spent two weeks without food and water, with seven bullet wounds. Having discovered this “very large pig”, the soldiers were about to shoot it, but the news accidentally reached Vasily Teslin, who had to act quickly and interfered, telling the general: “It’s a hippo, an incredibly rare specimen! There’s only six of them left in Europe. And this is the largest and most famous of them all - Hans! Horrible! Vandals! He’s worth millions! You’re looking at a national treasure!”

And so, Hans was saved from the firing squad. But how do you go about curing the animal? The colonel began looking for a doctor with the appropriate profile. “I’m calling one detachment,” he remembered, “and they laugh at me. They tell me: ‘If you ever need specialists in courting women, do let us know, we have nobody here to tend to a hippo.’ So, I call another detachment - and there are jokers there, as well. ‘Why don’t you call Africa?’ they tell me.” 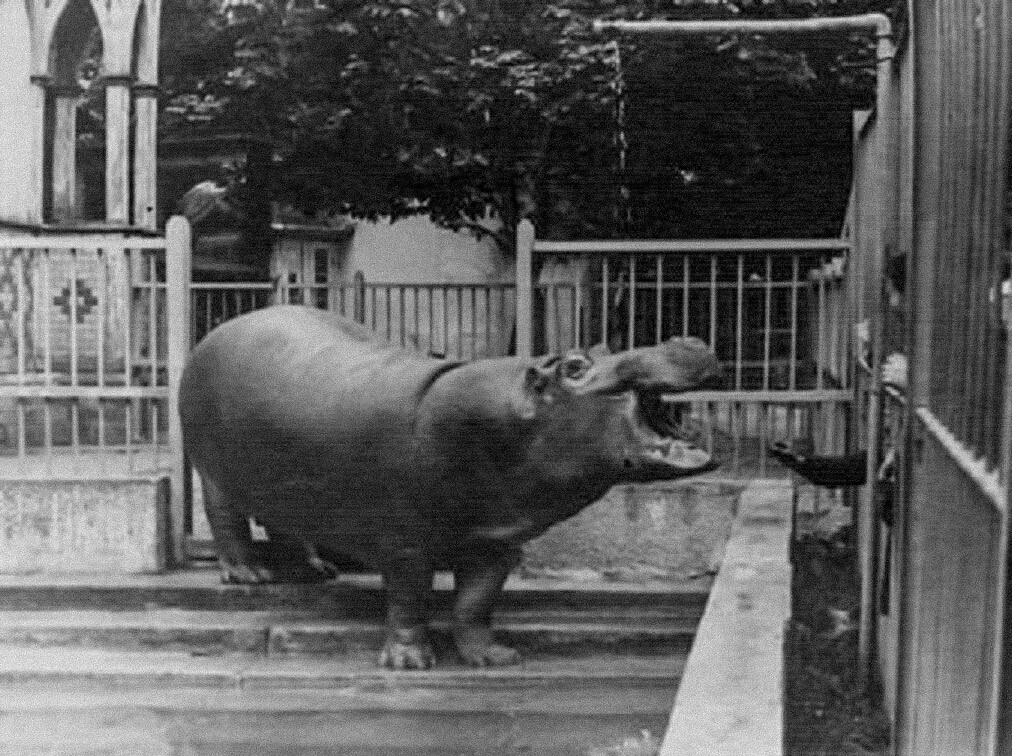 Help was finally found, thanks to Teslin’s city-wide appeal, plastered on walls everywhere. It came in the form of a frightened German physician, who was able to look the animal over and issue a prescription. “Two liters of pure alcohol per liter of milk. Twice a day.” But the hippo’s sepsis prevented the German from carrying out more complex procedures. At first, the soldiers themselves took care of the sick animal - the same ones that had almost shot it. “One of them holds the hippo’s upper jaw, the second holds the lower - and the third, as I remember it now, forcefully pours the mixture down its gullet, using a bucket while yelling: ‘Alright, comrade, take your hundred grams for bravery on the front line!”

Later, Hans was seen by a real zoologist technician - Vladimir Polonsky. Here is what he wrote:

“It was the first time I treated anyone with water. I later tried to give it milk. Then some grated beets. The hippo finally started to eat, but began refusing the food three days later.”

Polonsky then began acting according to established protocol - feeding the animal vodka. There was a pattern there: Hans would only eat normally after having a drink. This tragicomic story was later relayed by the physicians in his report:

“I gave him four liters. After that, the hippo would start really asking for food. I gave him an enema first (four liters of distilled water). Then set about feeding him. The hippo had tried to get out, but, due to being drunk, he simply tipped over.” 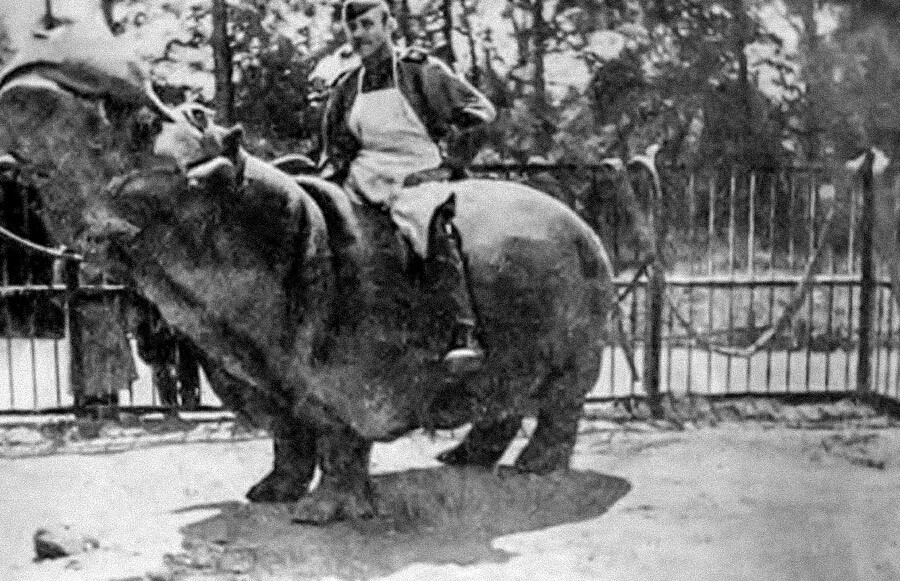 State Archive of the Kaliningrad Region

Overall, Hans was “treated” with vodka for two months, until he fully recovered. “I’m now training the hippo - riding it across the park and so on,” Polonsky concluded in his report.

The second uncomfortable story happened with Glyasik. This one was almost a detective story come to life, involving the Federal Agency for Drug Trafficking, customs, a city mayor, the media and the government itself. And it was all because of a tooth!

Glyasik was the son of a famed female hippo named Mary, who also carries the honor of being the oldest hippo in Europe (she died in 2013 at the age of 56). Glyasik had spent more than a year in great physical pain: one of his fangs was growing the wrong way, traumatizing his cheek. The hippo wouldn’t let anyone touch the tooth, suffering in agony. It had to be removed pronto. 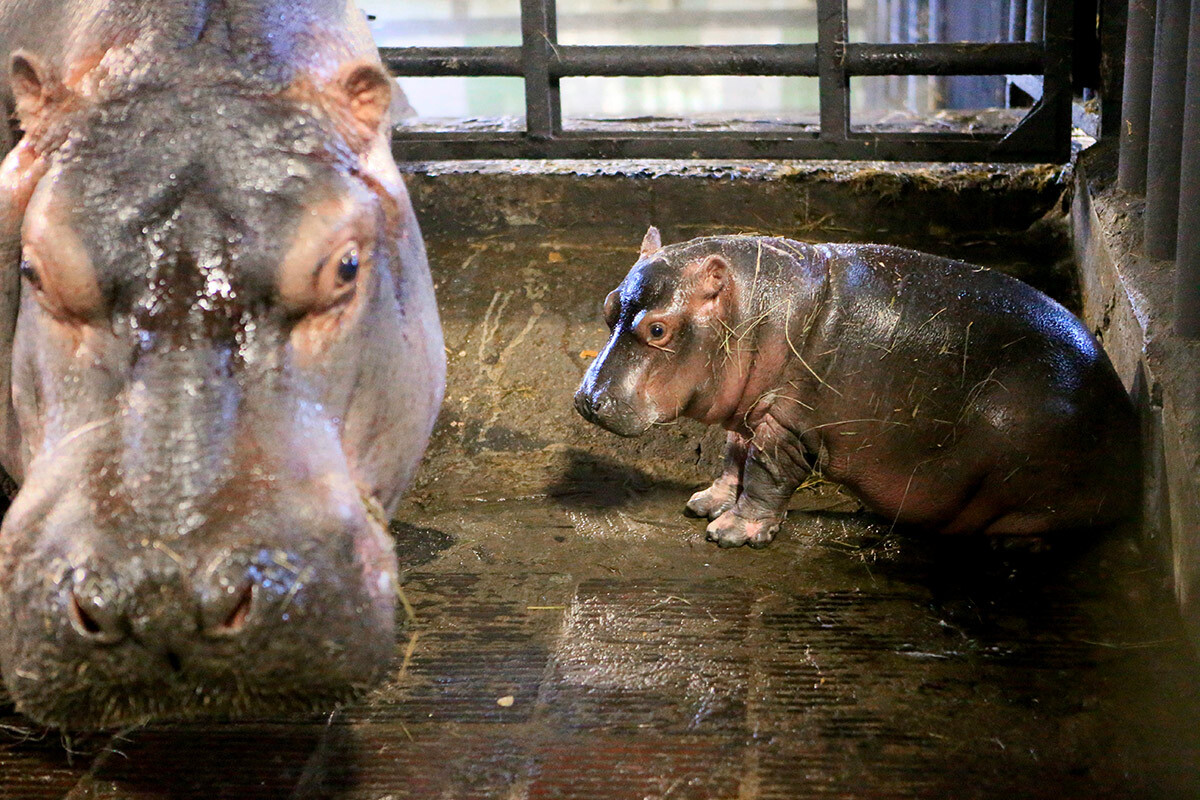 “First, we tried to saw off Glyasik’s tooth, tying him with ropes, but as soon as we began surgery, he tore the ropes and almost swallowed our vet whole,” a zoo staffer remembered. “The hippo is considered to be the most dangerous animal. It’s practically three tons of pure muscle. If you get them mad, they can ram through a concrete wall. It’s scary. You know, I’d rather die in my bed.” 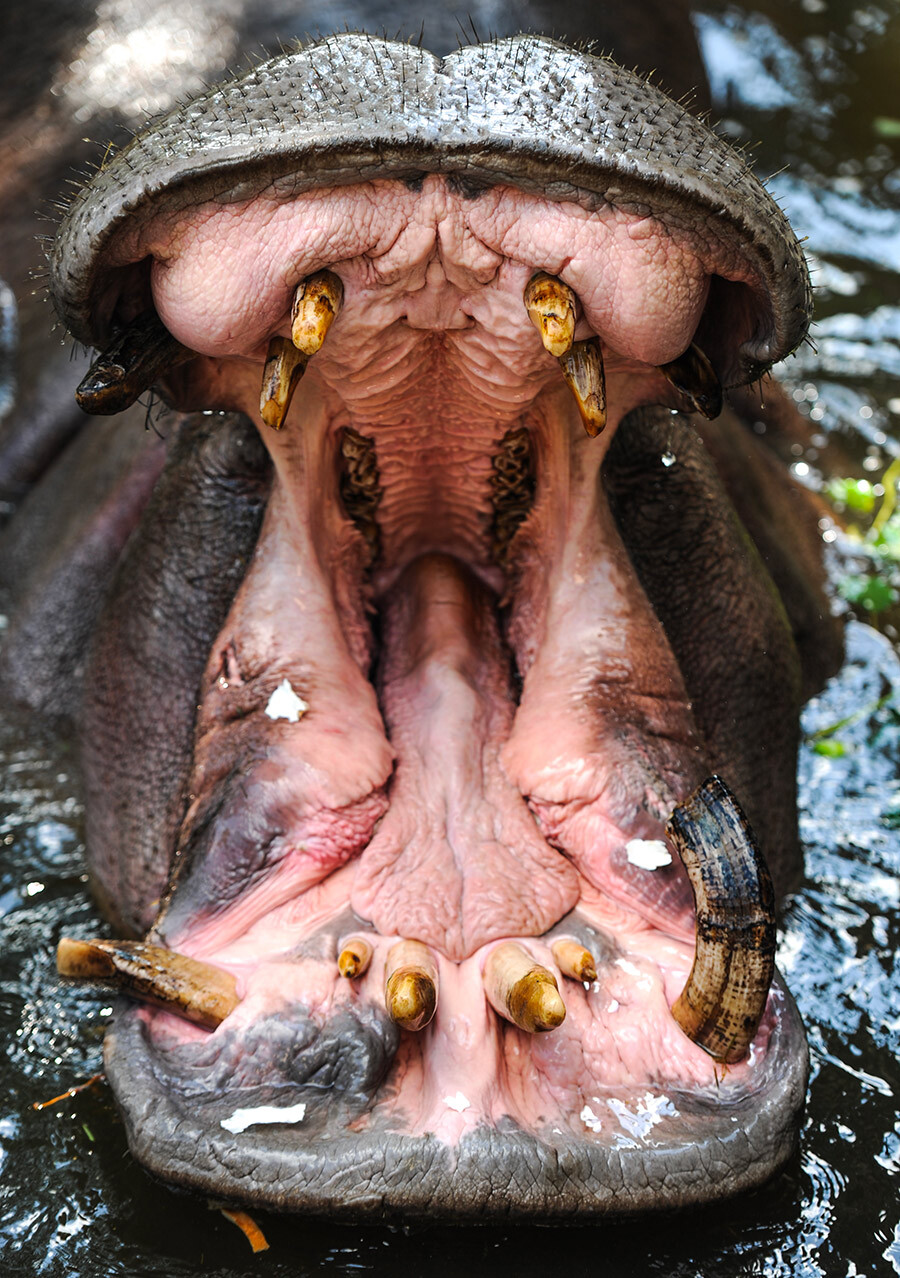 The man who took on the challenge of sawing off the tooth - for free - was a German vet and professor named Michael Barr. But, it turned out that he couldn’t get the necessary medication through Soviet customs, due to certification issues. And the three-ton animal required a lot of drugs - about half a liter’s worth. At that time, one could get 20 years in prison for that amount. There were no alternatives and customs didn’t want to risk it, while getting the meds into Kaliningrad through two borders was just too complicated. The situation was becoming protracted. And while the issue was quietly discussed by the zoo’s administration and government officials, the tooth continued to tear through the hippo’s cheek. 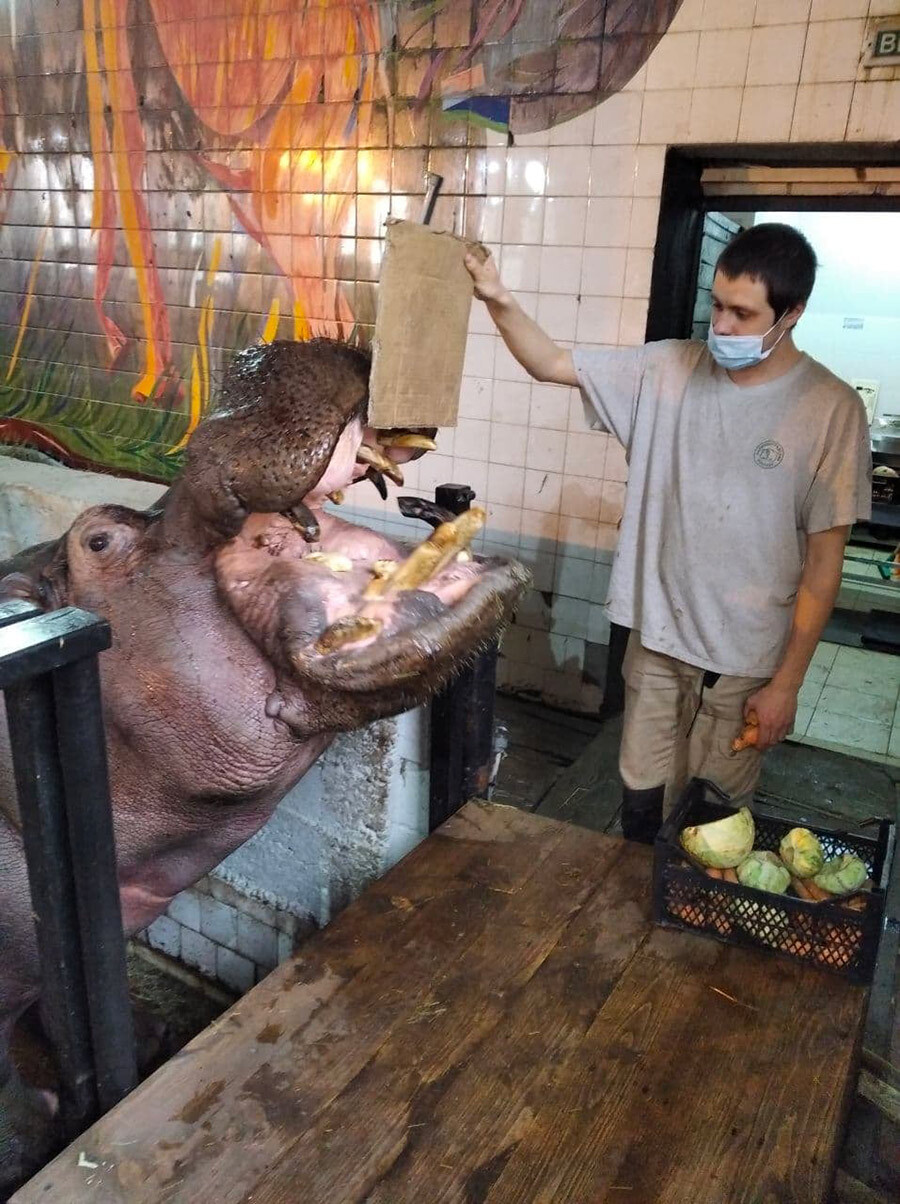 The story went public almost by accident when, in 2011, journalists of the Moscow edition of ‘Russian Reporter’ arrived in Kaliningrad with an educational project for students of the faculty. They went into town to search for newsworthy stories at the local zoo. Glyasik’s story finally went public and gained widespread attention and the process of removing his ailing tooth was finally underway. 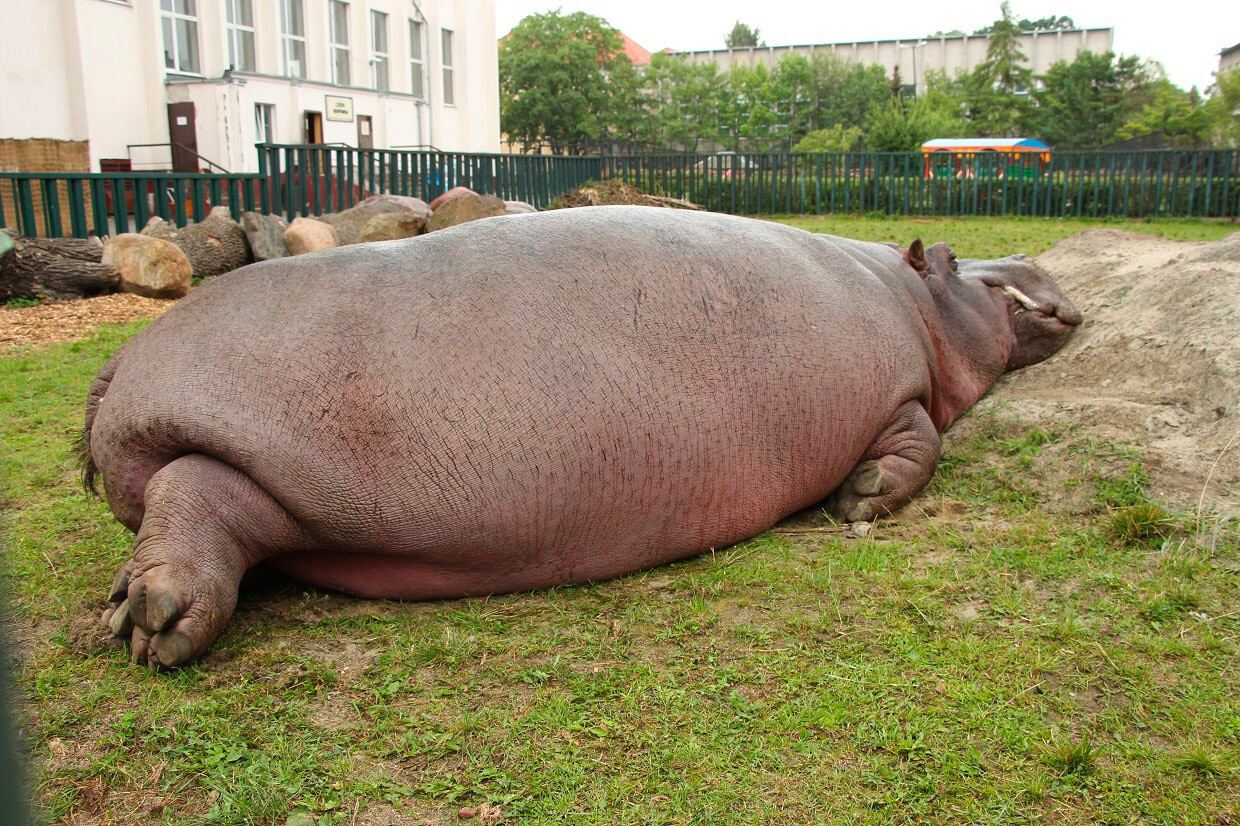 The hippo enclosure became a topic of interest for politicians, too: the governor promised on Twitter to help the poor animal; the mayor, meanwhile, promised to acquire the necessary amount of the required drug. The hippo gradually turned into a PR project and there were jokes going around about it even getting party membership from ‘United Russia’. 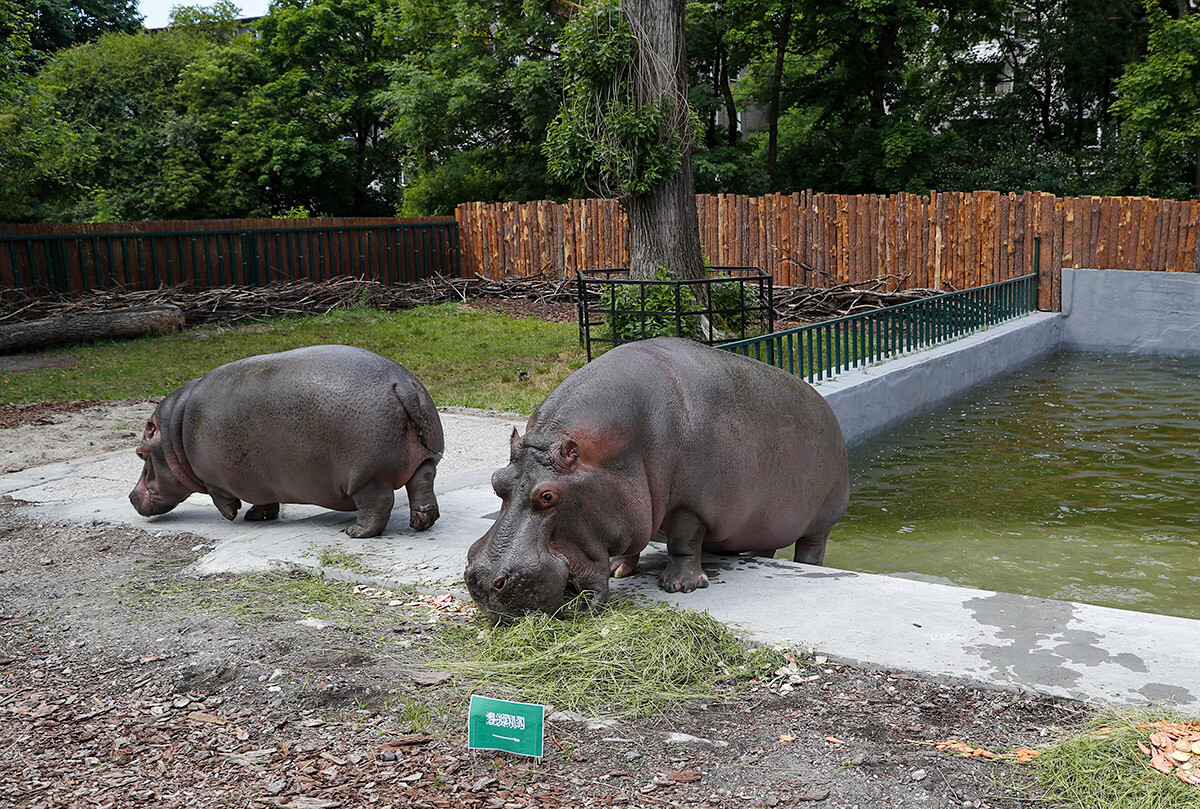 But the publicity finally paid off. The anesthetic was delivered and the tooth was successfully sawed off. Glyasik, who is now 31 years old, continues to live at the Kaliningrad Zoo with his partner, Milya. He’s now a healthy hippo and doesn’t complain about toothaches anymore.