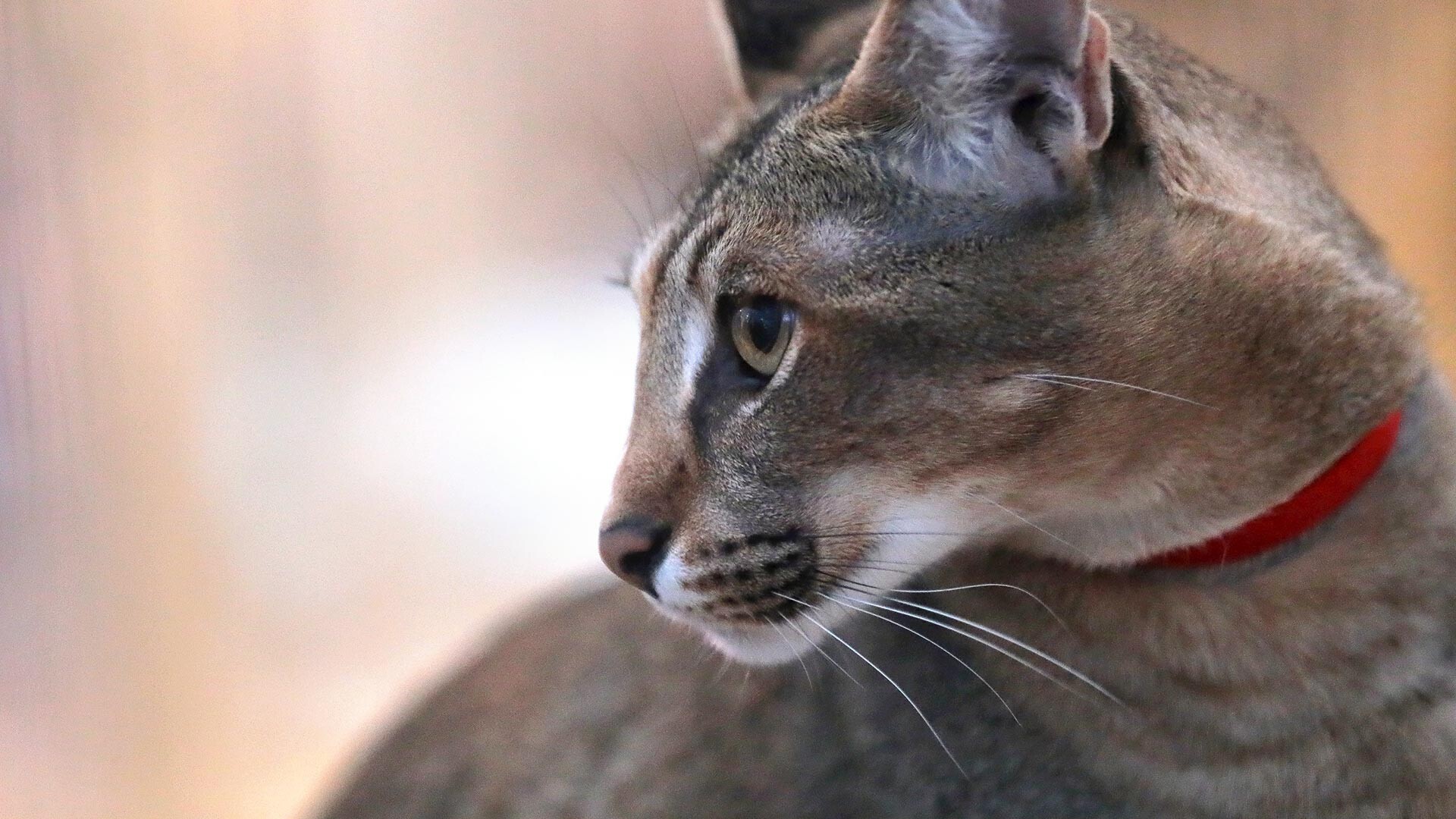 A caracat at the exhibition of the rarest domestic cats in Moscow.

Vitaly Belousov/Sputnik
The hybrid of a steppe Caracal lynx and a domestic cat appeared by accident, but now this is one of the most wonderful pets you’ve ever seen.

“Sandy” fur, tufted ears, impressive size - from afar, it seems to be a caracal - a beautiful and wild steppe lynx. But this, in fact, is one of the rarest domestic cats in the world - the caracat - and it appeared in Russia. 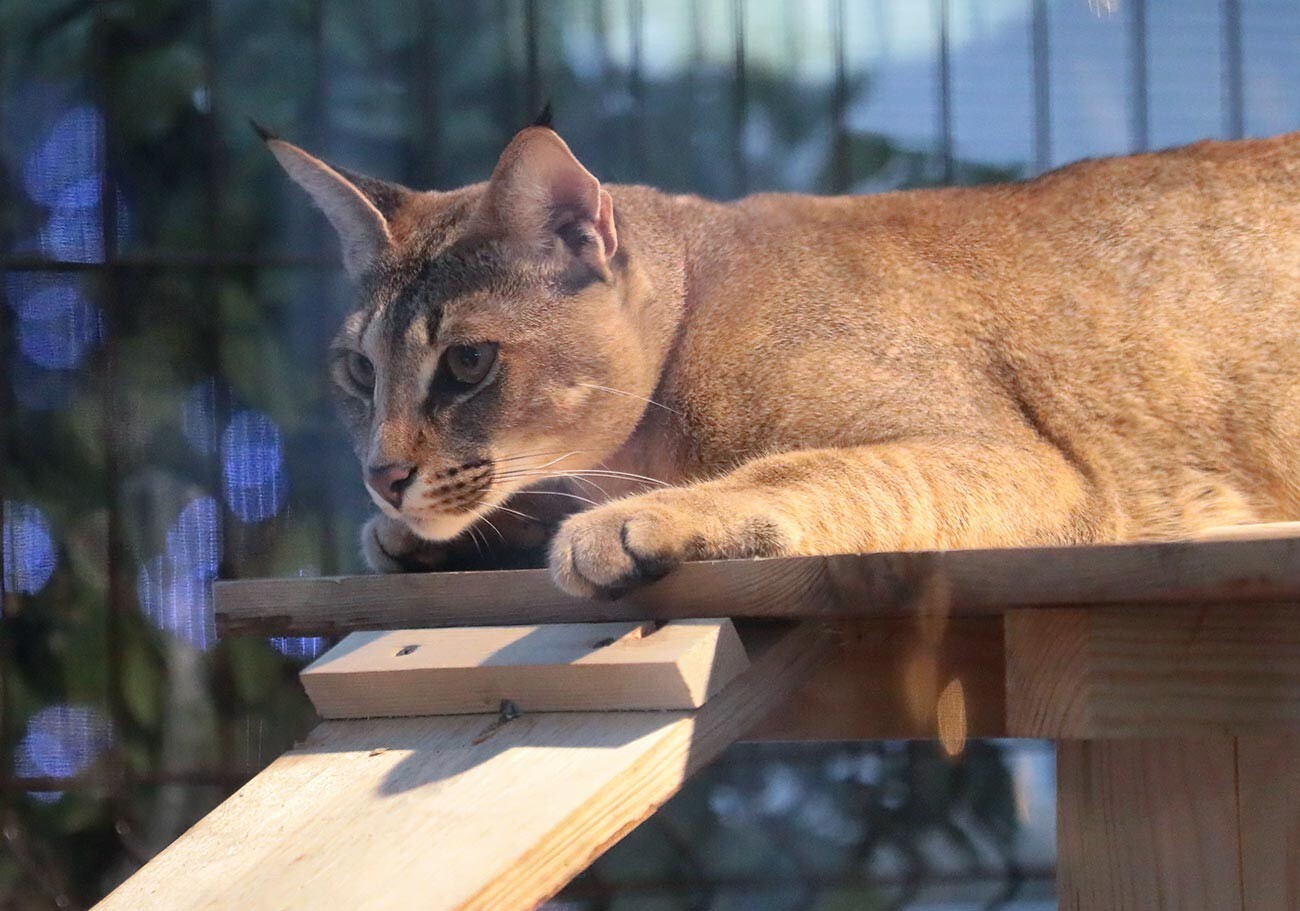 Wild and domestic cat hybrids are not a rarity. You’ve probably heard about Bengals (domestic cat and Asian leopard cat) or Chausie (an Abyssinian and a jungle cat). A hybrid of caracal and serval is known as a Caraval. The history of the caracat began in the Moscow Zoo in 1998, when a domestic cat entered the male caracal’s enclosure and they mated. The cat gave birth to a kitten with tufted ears. This story was first described in an article by I. Kusminych and A. Pawlowa in the German magazine ‘Der Zoologische Garten’ under the title: ‘Ein Bastard von Karakal Hauskatze im Moskauer Zoo’ (Vol. 68, No. 4, 1998). One of the zoo employees also recalled this a few years ago, but we don’t know the further fate of that kitten, except that it left no offspring.

However, the appearance of the caracat stirred great interest in felinologists all over the world.

2. Russia is home for caracats

In the early 2000s, American felinologists Joy Geisinger and Allison Navarro tried to breed caracats by crossing a caracal with an Abyssinian cat and the caracats were officially recognized by The International Cat Association (TICA). Some years later, breeders abandoned their attempts. In the 2010s, Ukrainian felinologist Anna Kuzmina made progress in ‘F1’ (the first generation of caracats) kittens. But, the greatest success in breeding further feline generations was achieved by Russian felinologists.

The less “wild” the blood, the shorter the tufts on ears and the smaller the cat. Kataleya has several subsidiary nurseries across Russia, where they breed these rare cats. There is also a nursery near Barnaul (Altai Territory), where the biologist and geneticist Inna Dombrovskaya studies the caracats (from F1 to F3). 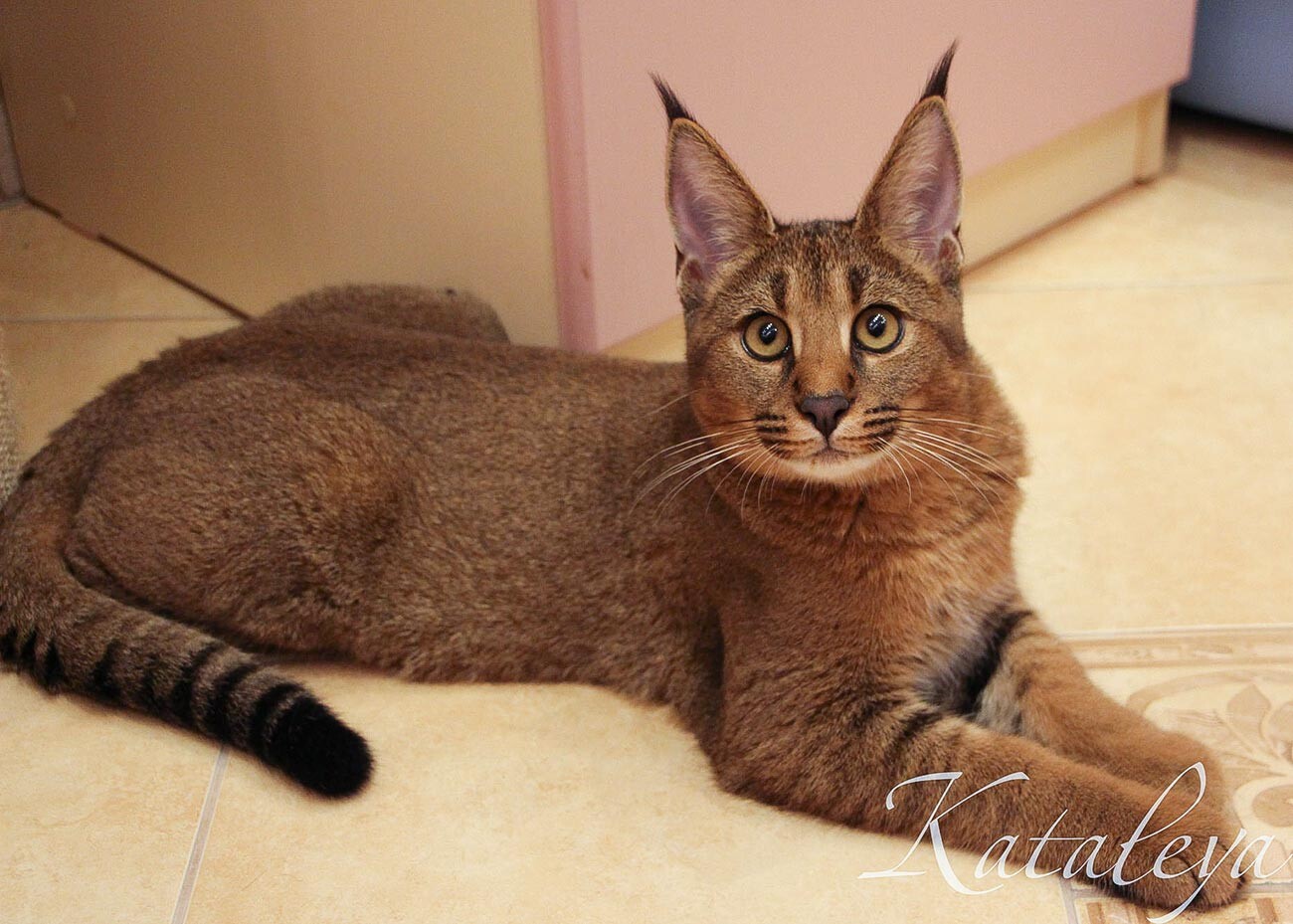 Thought that the largest domestic cat is the Maine Coon? Take another look at the caracat. An adult cat weighs 15-25 kg and, when standing on all fours, it will be waist-high to a human. In addition, this cat inherited wide ears with tufts, long graceful paws and a black-and-sandy color of the face from the caracal. The caracat, by the way, does not cause allergies.

Kittens can go to a new house at three months old - by this time, they are already accustomed to a cat’s litter box and already eat raw meat.

Inna Dombrovskaya bought her first caracat for the Kataleya nursery back in 2016. As she told local media, she had to sell her car, because the kitten cost one million rubles - about $14,000.

5. A cat with a dog behavior 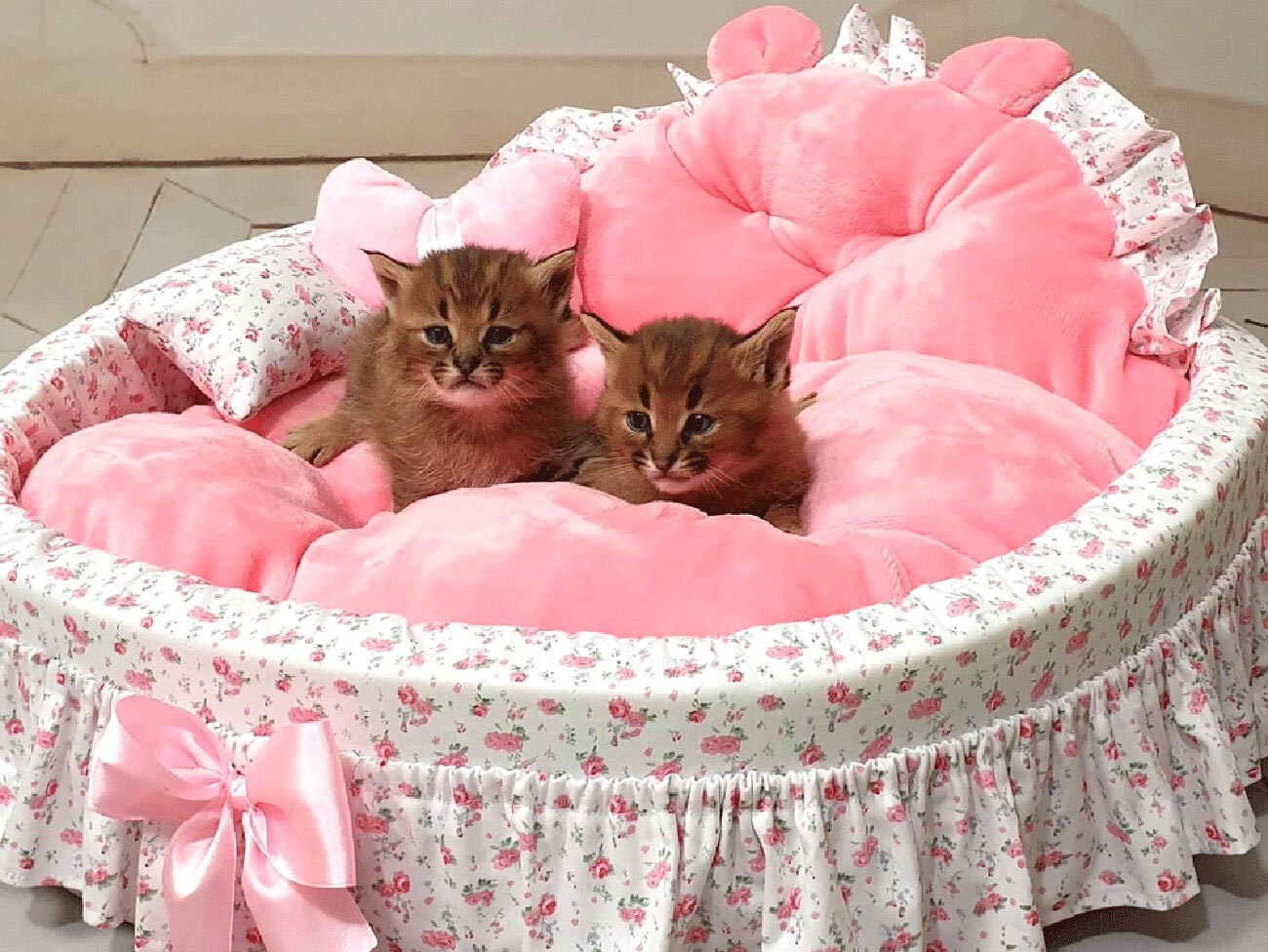 Caracat owners admit that their pets are very different in character from usual cats. “He rushes to meet me at the door from work. Walking on a leash. He sees me off every morning, lies down on my boots and looks pitifully so that I don’t leave, purrs loudly and licks my feet. Doesn’t scratch at all. He is sociable. Likes people’s company,” are some of the reviews left by owners.

“The behavior is absolutely not cat-like. He visits guests with me, sits calmly in the car, he is friendly to all people, doesn’t hiss at anyone. If guests come, he rubs on their legs and purrs,” another owner writes.

Caracats, however, have the most “cat-like” trait - they like to climb high (to observe their territory from above) and adore boxes (which cats don’t?). The owners need to arrange hammocks, scratching posts, ladders and other “activity” devices at home.

6. An aristocrat in gastronomy 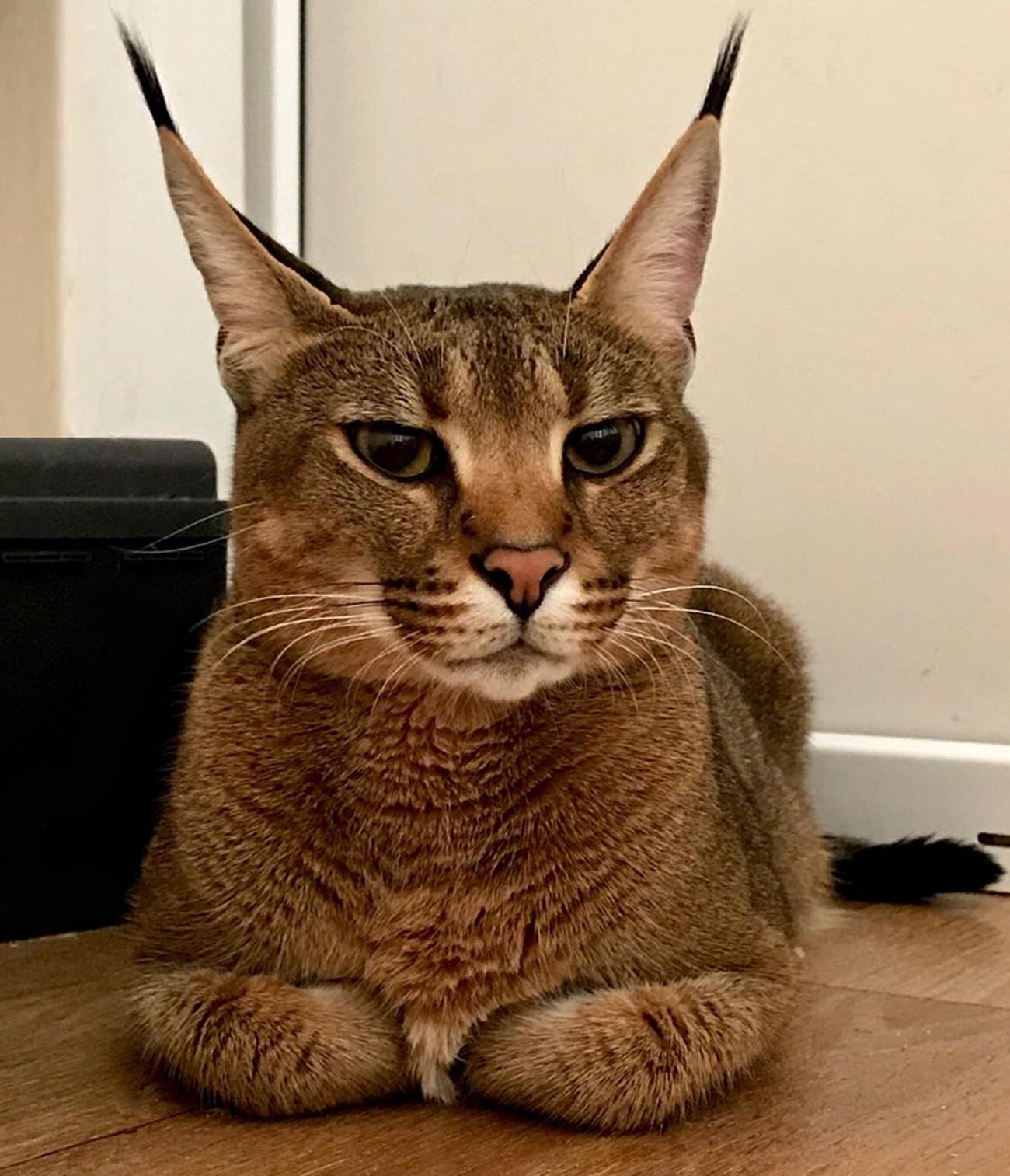 Caracat is a big gourmet. It can eat only fresh meat and quails are best suited. Also, caracats eat rabbit and chicken. An adult cat eats almost a kilogram of meat a day and this is not a joke. But it won’t even touch cat food. It can’t eat fish, dairy or especially pork. Breeders also recommend only filtered water.

Caracats, like all animals, shed from time to time, so they need to be combed out. They also really like to bathe - it’s not recommended to wash kittens more often than once every three months, but adult cats can calmly get into the bath after a walk. Yes, caracats enjoy going for walks!