What are the most popular DATES for weddings in Russia? 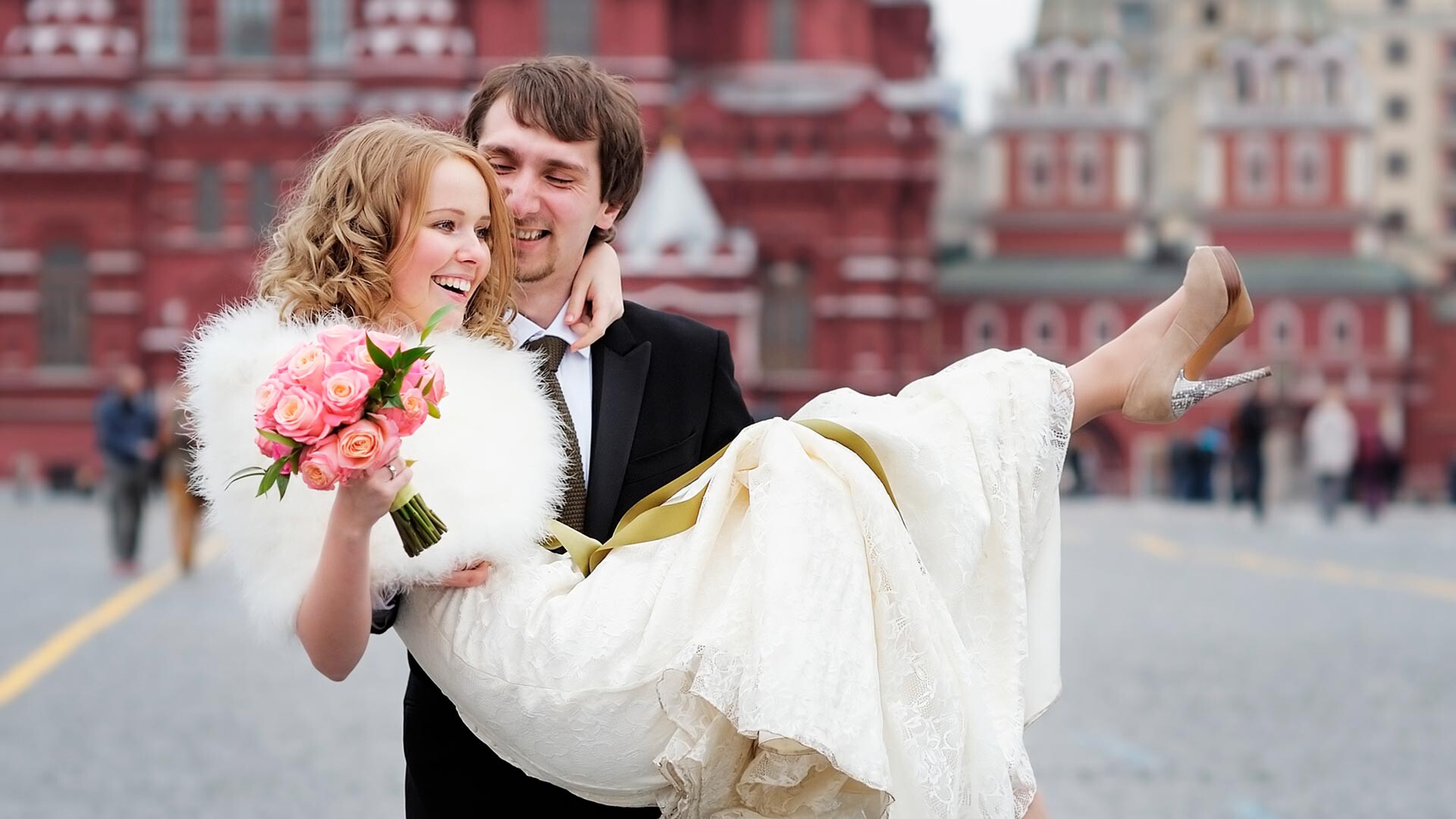 Legion Media
Every year, about a million Russian couples register their marriages, but the real wedding boom occurs on these special dates.

Most wedding registrations in Russia take place during the warm summer months (most often Fridays, to continue celebrating through the weekend), but even on cold winter workdays, civil registry offices can be overcrowded with newlyweds.

On the most popular dates, offices organize unusual festive registrations: on skating rinks, in cable cars - and even underground. 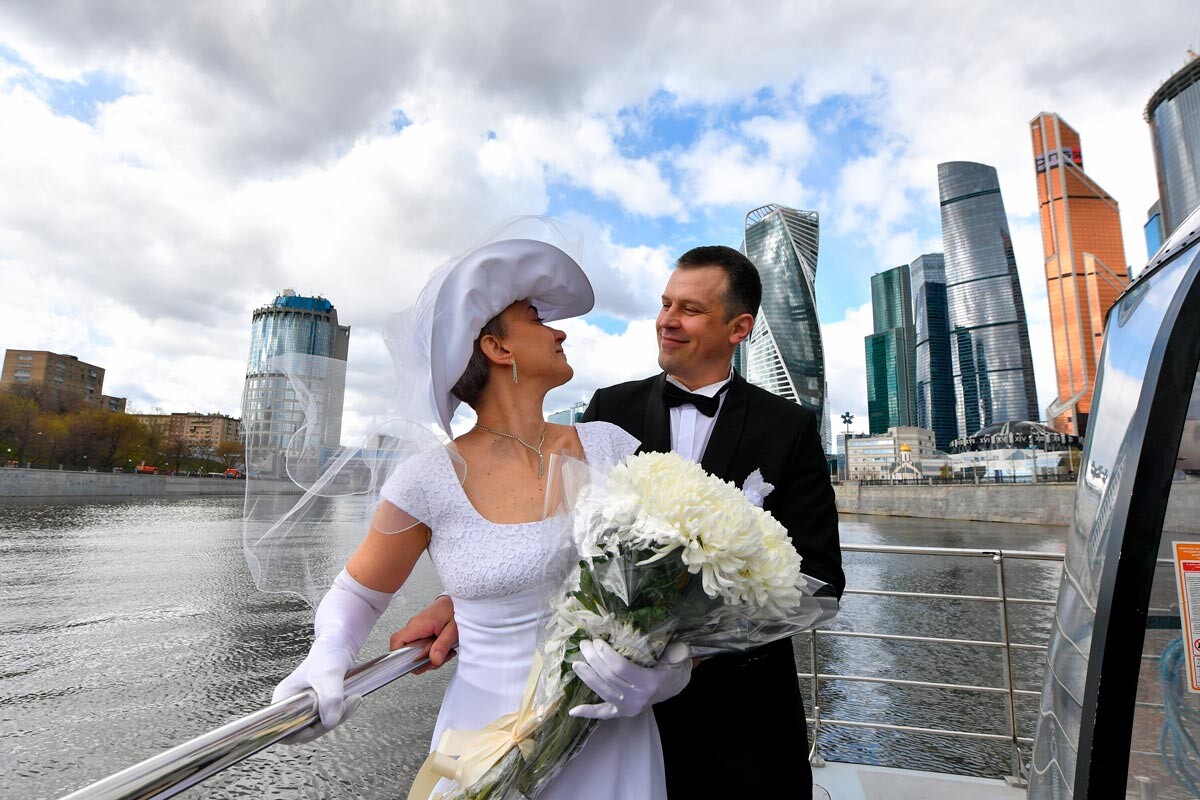 A wedding on a boat cruise across the Moskva River, 2022.

This day used to be a pagan holiday for newlyweds, which was then superimposed onto Orthodox traditions. On the one hand, it’s the first Sunday after Orthodox Easter (from late April to early May, depending on the year) - the day the church once again begins to perform wedding ceremonies, which are forbidden from the beginning of Lent (after Maslenitsa) until Easter. However, in pagan times, Krasnya Gorka was the celebration of new spring and a day when young people could once again marry after the long winter (read more about this holiday here).

Nevertheless, this day opens the wedding season in Russia. Registration offices suggest new locations for weddings: for example, in 2022, Moscow couples married on a boat cruise across the Moskva River. “My future husband Sergey and I found out that we could get married on the Moskva River while we were preparing for our wedding,” says Anastasia Mamontova. “And since we have always enjoyed river excursions in the capital with interest and the impressions remained unforgettable, we made a unanimous decision to get married on the river boat, having made sure that the weather forecasters promised sunny and spring weather on Sunday.” 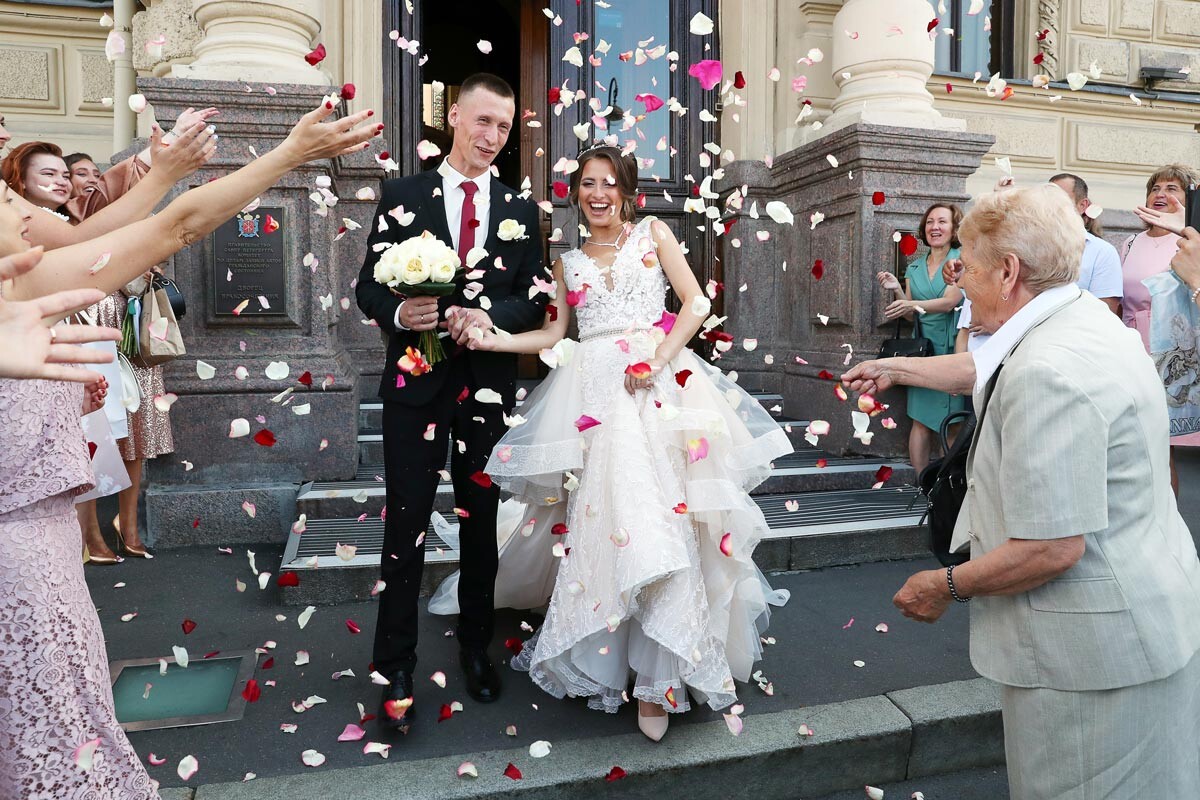 A wedding on July 8 in St. Petersubrg.

On July 8, Russia celebrates the Day of Family, Love and Fidelity, a holiday promoting traditional family values. It’s a relatively new holiday in Russia, officially introduced in 2008. It’s also known as ‘The Day of Saint Peter and Saint Fevronia’, who are the Orthodox patrons of marriage. The main celebrations take place in the city of Murom (Vladimir Region), the hometown of these saints.

In addition to new marriages, it is popular to repeat weddings on this day. So, in 2021 in Moscow, there was such a ceremony in the 1970s-style: Viktor and Larisa Lysenko, who married 56 years earlier, decided to make the ceremony once again. Instead of rings, they exchanged daisies and ate a wedding karavai (a pie). 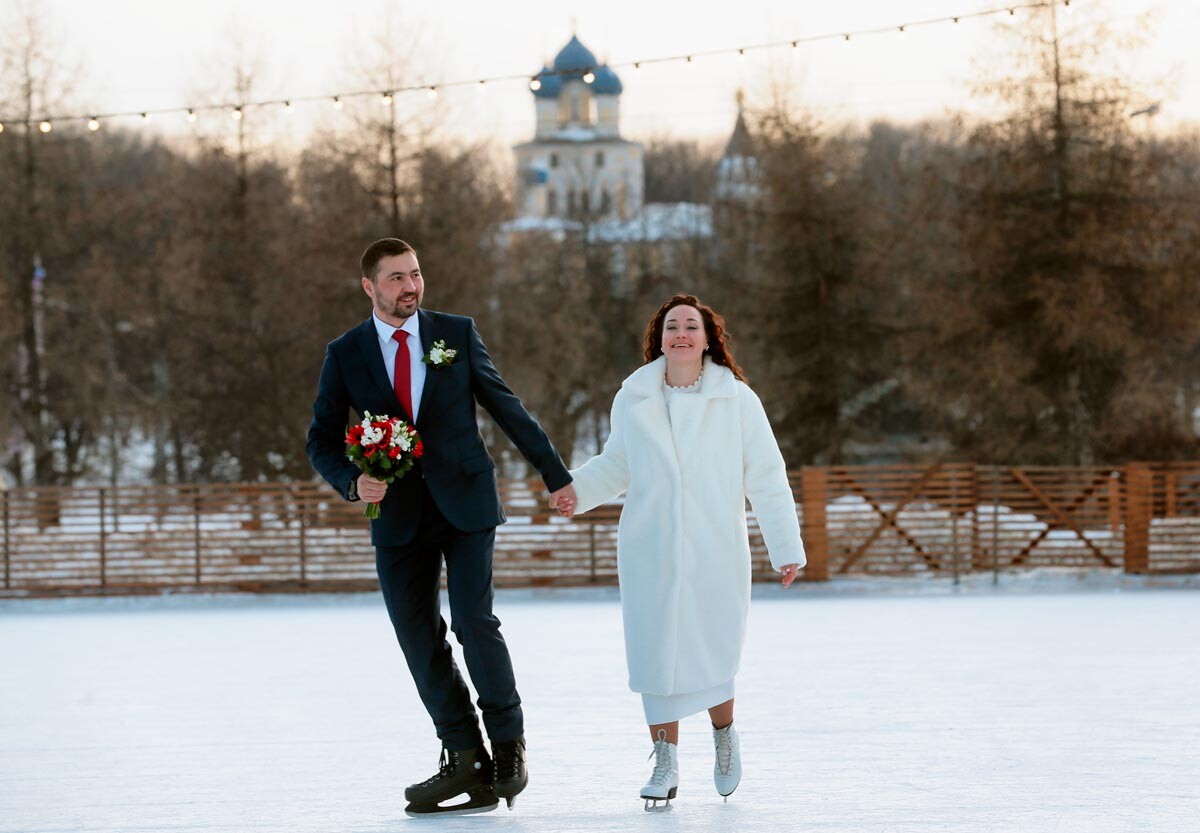 The youth also choose Valentine’s Day for weddings. By the way, some couples admit that February 14 was also the day they first met. “We met 5 years ago on February 14 - it’s our anniversary, that is why we chose that day. We didn’t think about getting married in the summer, winter is our favorite time of year. And even the photos are more beautiful in winter,” say newlyweds Ekaterina and Anton from Novosibirsk. 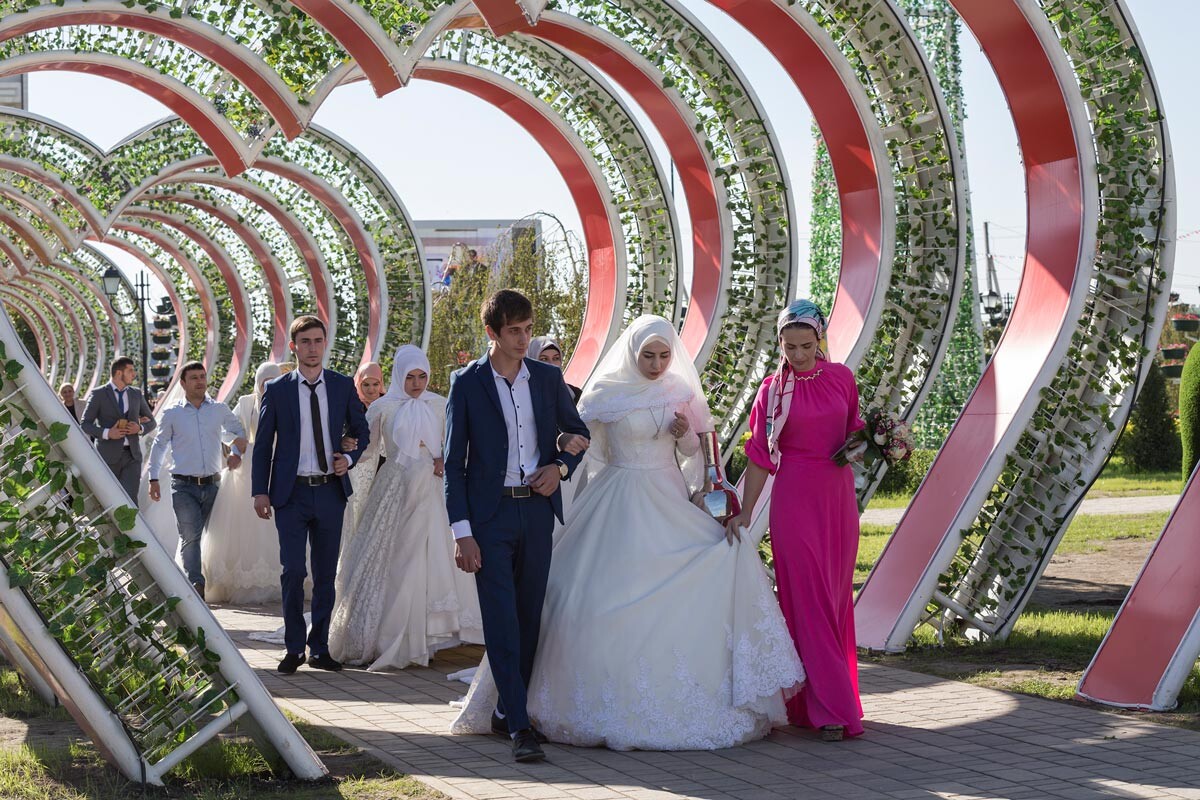 Mass marriage ceremonies on City Day are another interesting Russian tradition. For example, since 1983 in Yekaterinburg (the Urals), city authorities traditionally raffle off an apartment among the newlyweds.

In Grozny (the capital of Chechnya), 199 and 200 couples, respectively, celebrated their weddings at one time in 2017 and 2018 - when the city marked 199- and 200-year anniversaries. The celebrations took place in the city center, where the Grozny City skyscraper area and the Alley of Hearts made of flowers are located. In honor of the city’s anniversary, 200 other families also received apartments.

City Day weddings are also very popular in Moscow, with about a thousand couples registering marriages on the day itself and an equal number choosing nearby dates. 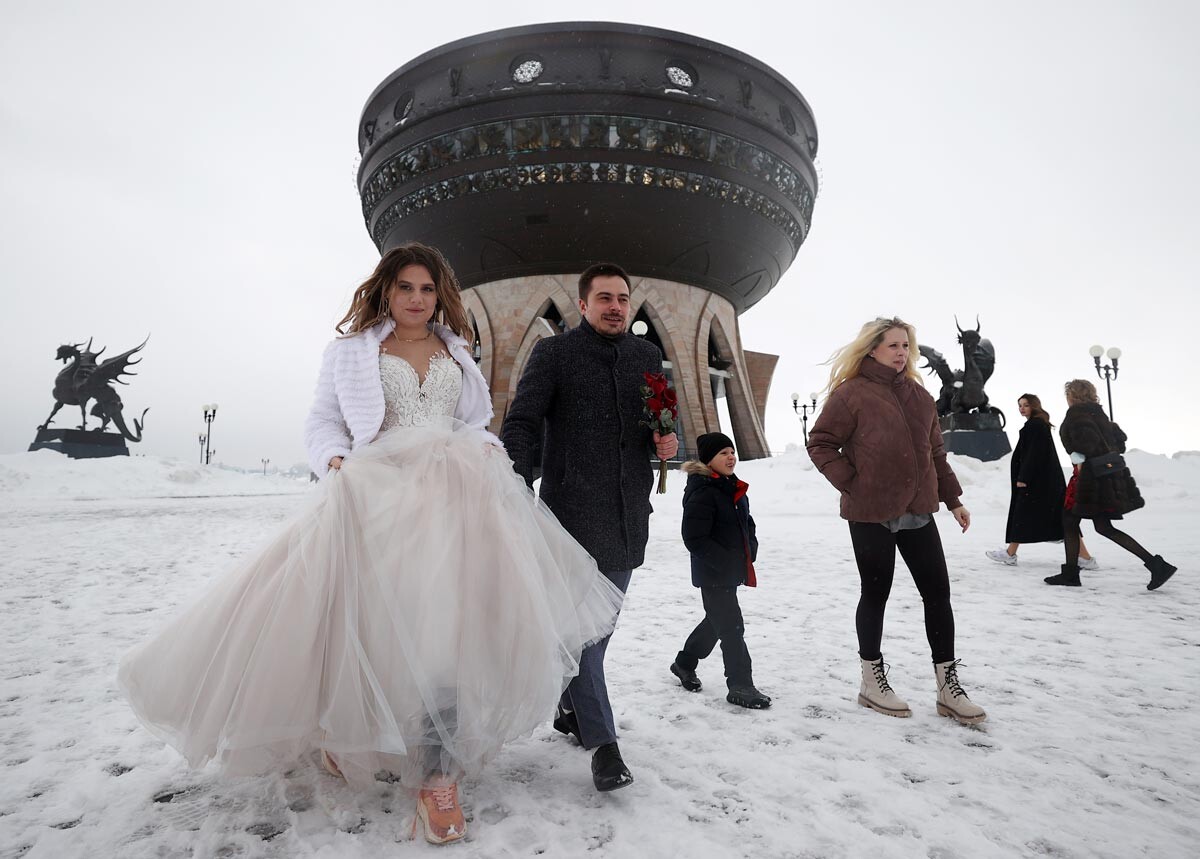 But, perhaps the most popular dates for weddings among Russians are “pattern” dates: thus, in 2022, the most popular was February 22 (22.02.22) - 7,000 couples in Russia got married on this day, that is, about three times more than any other day.

Anton and Oksana Kolpikovs from Omsk chose the date six months in advance, according to a local newspaper. Anton confessed he is a number enthusiast and believes twos mean a couple. “We believe that something good will come true. Of course, the main thing is love, and then everything else,” the couple says.

Other popular dates were February 2 and February 20.

On such days, some of the register offices extend their opening hours even until midnight.