The largest diasporas in Russia 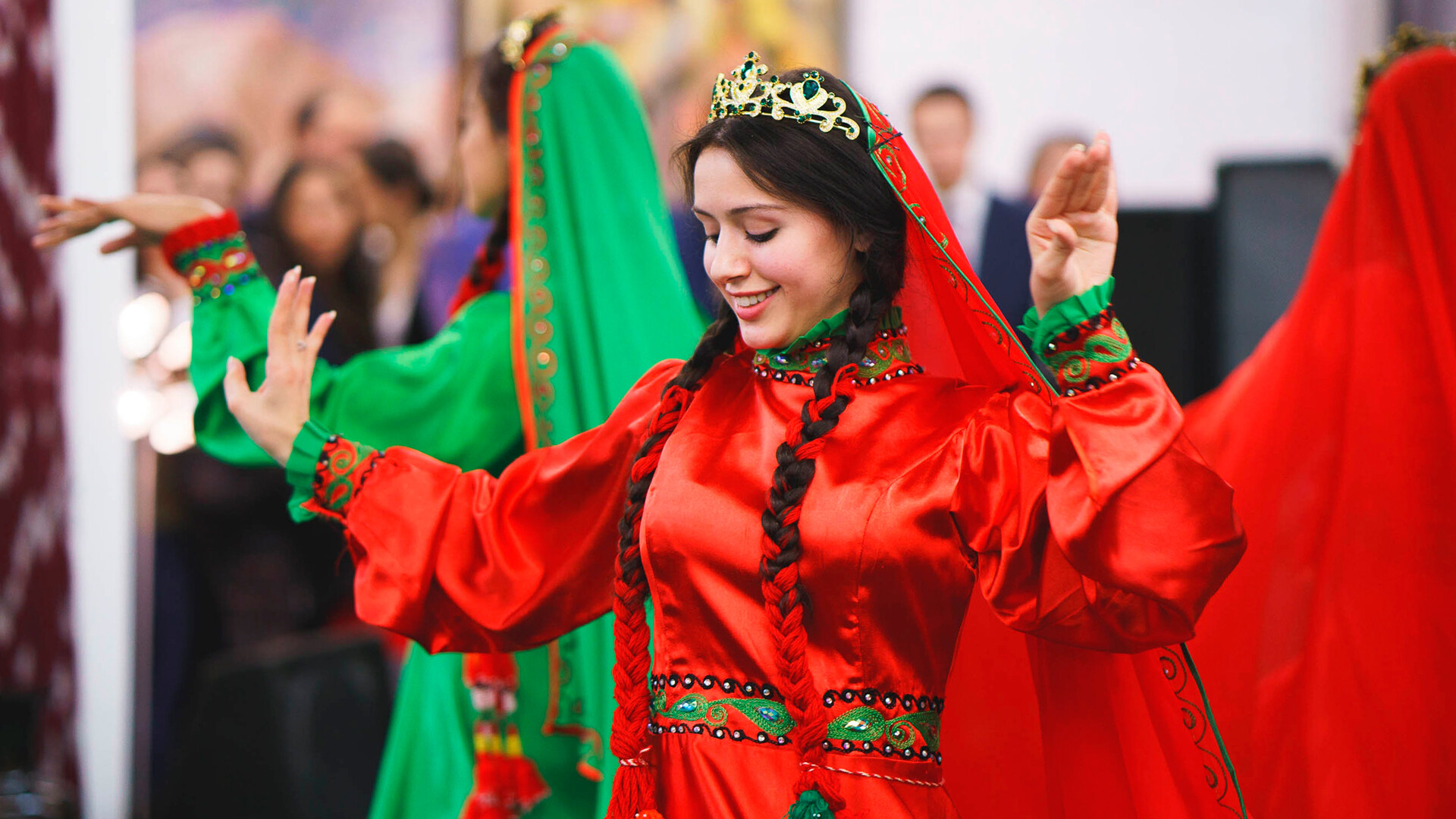 The artist from Tajikistan at the Ethnomir festival in Moscow.

Stas Etwesch/Sputnik
Russia has always been a multinational country. Besides numerous indigenous peoples, there are communities from neighboring states.

Today, Russia is home to about 147 million people (2021 data) and about 200 ethnic groups, which include both the indigenous peoples of the country and the ex-Soviet republics. Armenians, Azerbaijanis, Tajiks and Kirghiz all live in almost every city in the country. Citizens of many post-Soviet states also have the possibility of visa-free entry to Russia and they mainly form the most numerous diasporas. Although the oldest diasporas in Russia date back to the 16th century, today official statistics give only an approximate idea of the presence of various ethnic communities and their numbers.

In February 2022, Deputy Chairman of the Russian Security Council Dmitry Medvedev stated that the number of large diasporas in the country ranges from 1 to 5 million people. 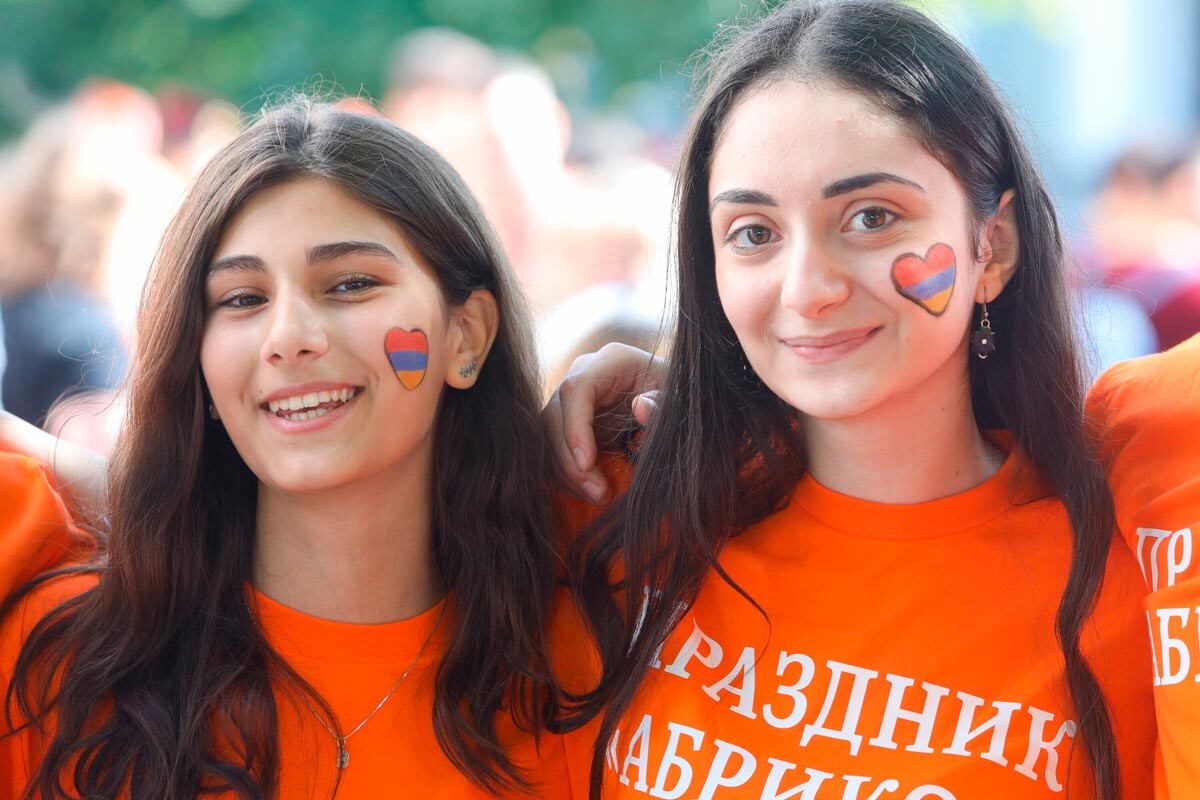 The Armenian diaspora is one of the oldest and largest in Russia. According to various estimates, there are between 1.7-2.5 million. Armenians living in Russia, mostly in the Russian south: Krasnodar and Stavropol territories and in Rostov Region.There are also large diasporas in Moscow and St. Petersburg. Considering the population of the Armenian state (about 3 million), Russians sometimes joke that all Armenians likely moved to Russia. In fact, these are not only people who migrated to Russia in the post-Soviet years, but also descendants of Armenians who have been living in the country since tsarist times. In Moscow, for example, the Armenian community appeared in the late 16th century and the legacy about it is preserved in the streets, such as Armyanskiy Pereulok (Armenian Lane) in the center and several streets bearing the names of well-known Armenians. In St. Petersburg, an ancient Armenian cemetery is preserved on Vasilevsky Island. There are also 120 Armenian churches in Russia, most of them in the south. 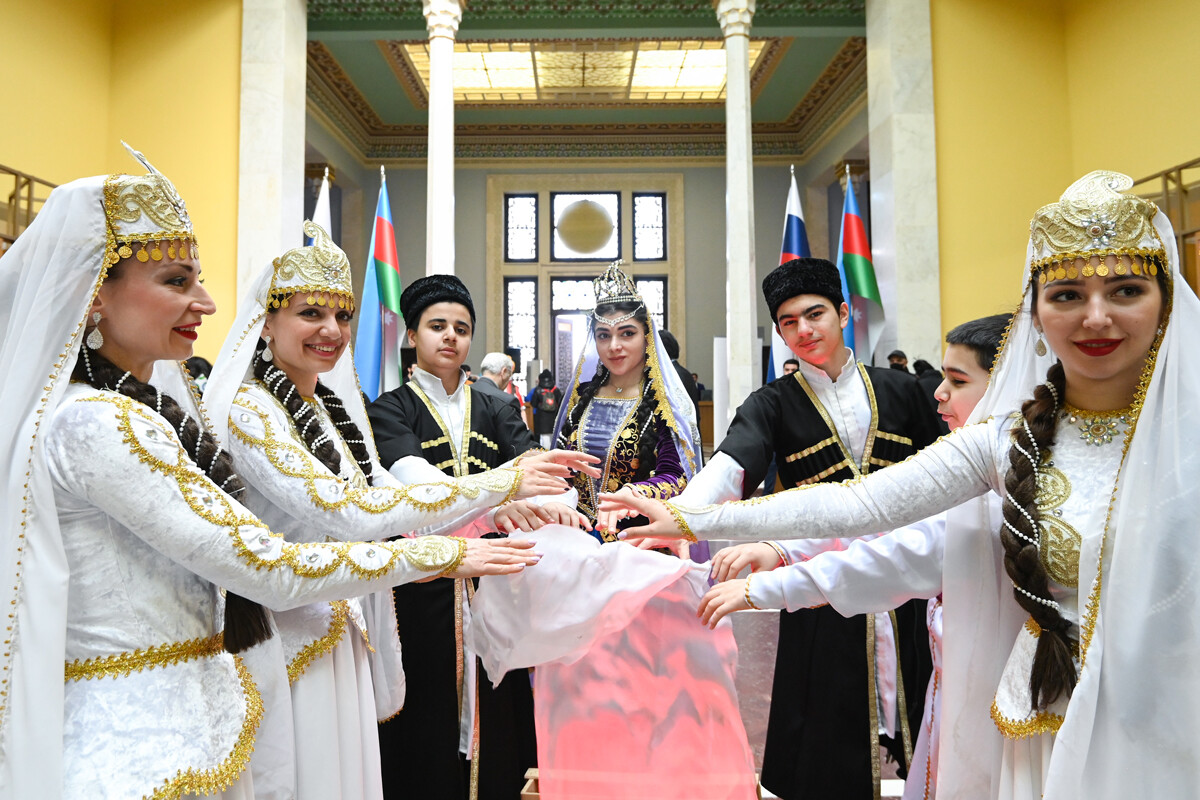 Russian Azerbaijanis are one of the indigenous peoples of Dagestan (a republic in the Russian North Caucasus that borders Azerbaijan) and the Azeri language is considered one of the official languages of this Caucasian republic.

However, there are also thousands of Azerbaijanis living throughout Russia today who came directly from Azerbaijan. The 2010 census put the total number of them at over 600,000, but some reports cite figures much higher, at up to 2 million. Historically, their large diaspora has lived in Astrakhan since the 19th century: they were engaged in oil prospecting and extraction there. After the collapse of the Soviet Union, Azerbaijani communities in Russia focused on the fruit and vegetable trade. “If you haven’t tried Azerbaijani tomatoes, you don’t know what real tomatoes are,” says Shahin Shykhlinsky, leader of the Azerbaijani diaspora in the Urals. 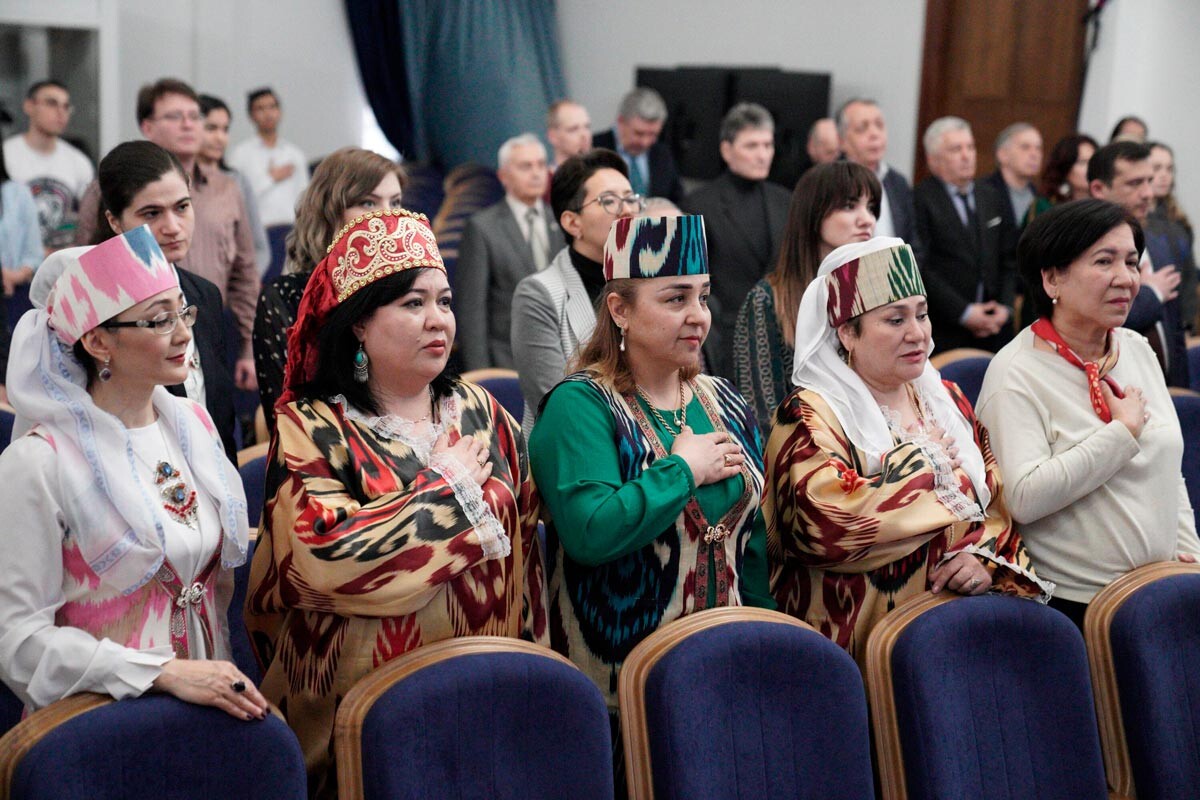 Opening of the Uzbek Language and Culture Center at Moscow State Linguistic University.

Mass migration of Uzbeks to Russia began in the 2000s, with the rise of the economy. Representatives of these people mostly come to work on a shift basis: they are engaged in construction, trade and cleaning services, sending their money back to their homeland. According to 2017 estimates, there are about 2 million migrants from Uzbekistan in Russia and less than 300,000 people with Russian citizenship. The largest number of Uzbeks live in Moscow, St. Petersburg and the Urals - and there are regional communities that help Uzbeks to obtain documents for work and solve legal issues. Also, Uzbek diasporas often take part in various folk festivals, treating guests with plov (a popular rice dish) and bread baked in a traditional tandoor oven. By the way, Uzbek cuisine in Russia is very popular and restaurants serving their national cuisine can be found in every big city of the country. 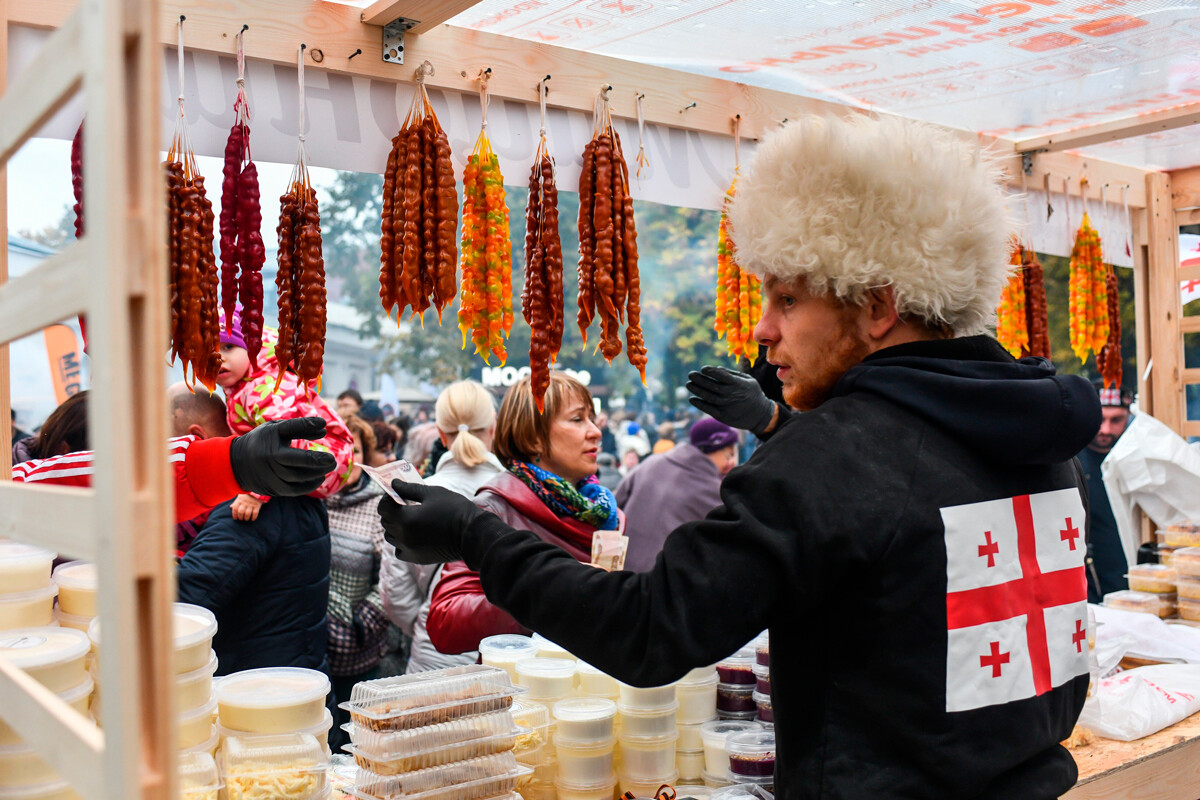 Like the Armenians, the Georgians form one of the oldest diasporas in Russia. For many years, there was the Georgian Sloboda in Moscow, a place where they settled (approximately in the area of the present zoo), and there is the well-known Church of St. George the Victorious, the spiritual center of the Georgians in Russia’s capital. Of course, Georgian names are also preserved in the street names. According to the 2010 census, almost 160,000 Georgians live in Russia, although experts estimate the number to be up to half a million. The Georgian diaspora unites many regional societies and holds various cultural forums, mostly in Moscow. And Georgian cuisine has remained the most popular in Russia since Soviet times, because 50 kinds of khachapuri (cheese-filled bread) can win any heart! 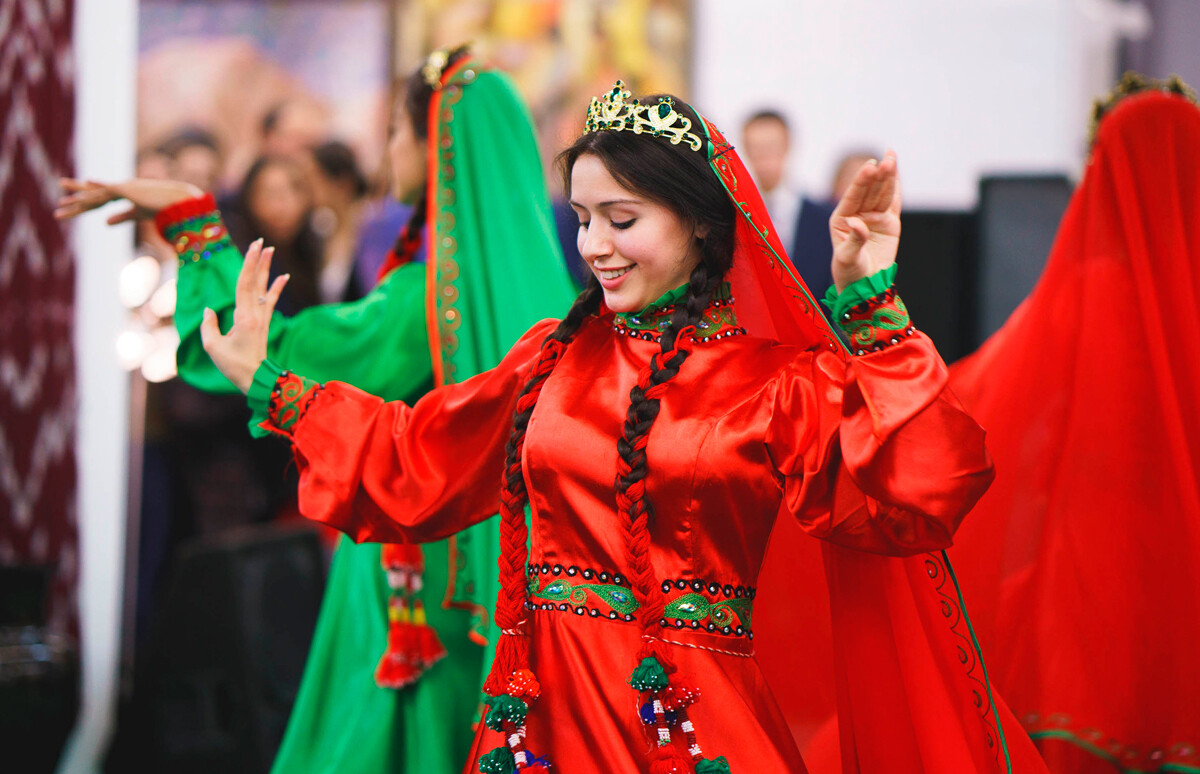 The artist from Tajikistan at the Ethnomir festival in Moscow.

Tajiks, like Uzbeks, began migrating to Russia for work in the 2000s. Today there are about a million of them (300,000 of them in Moscow), but there is no exact data because they work rotationally. There are a number of Tajik organizations in major Russian cities that help their compatriots find jobs, fill out documents and generally adapt to life in a different culture. “We try not to let fellow countrymen who (for various reasons) found themselves far from their homeland feel lonely,” say the leaders of the ‘Nur’ (Light) organization in Moscow, one of the largest in the diaspora. The organization helps migrant’s lids prepare for school, pass exams according to Russian standards and find a common language with local children. All this on a free basis. 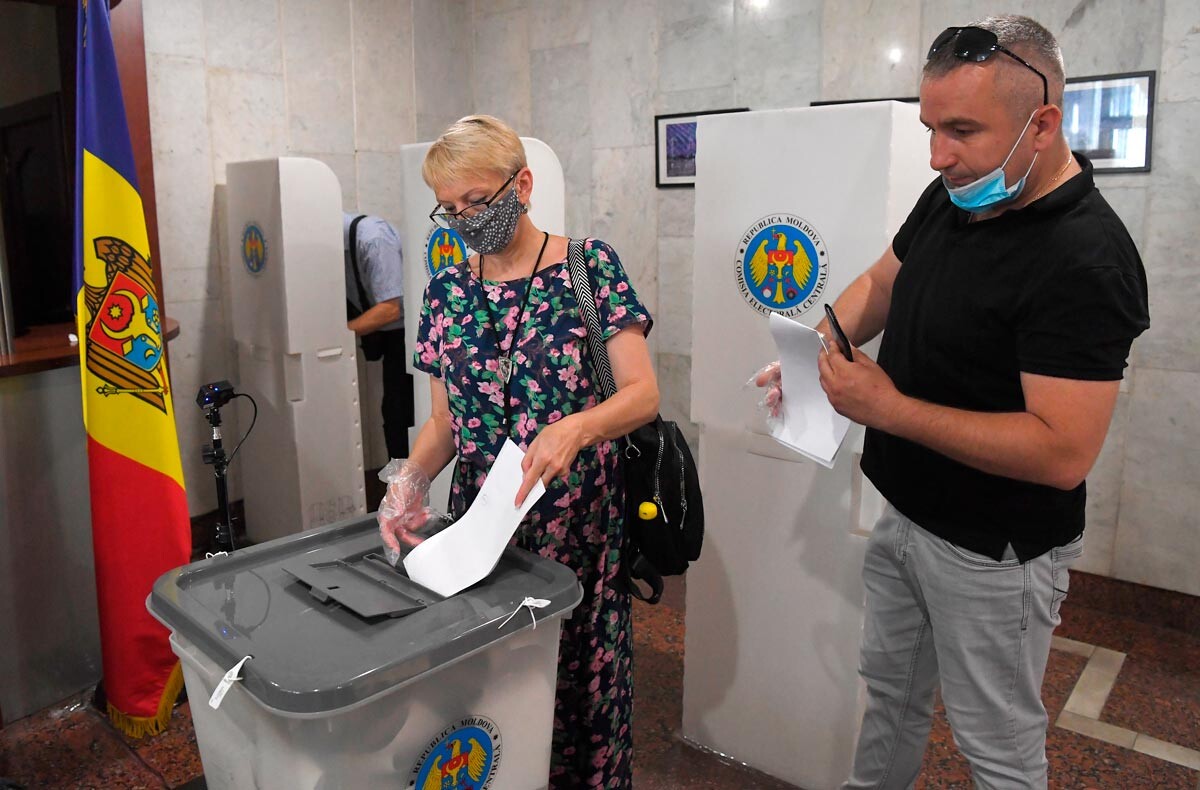 A polling station in Moscow during the Moldovan parliamentary elections.

According to different data, from 200,000 to 600,000 Moldovans live in Russia. The difficult economic situation forced people to leave Moldova in the early 2000s and the main direction for them is Russia, which turned out to be closer in mentality and traditions. Young people from Moldova often come to Russia after school to get an education and find a job. Moldovans also come as migrant workers. And 99% of Moldovan migrants speak Russian. At the same time, Moldovans who live abroad participate in various associations and even hold their own “Congress of Moldovan Diasporas”, in order to preserve traditions and ties with their homeland. 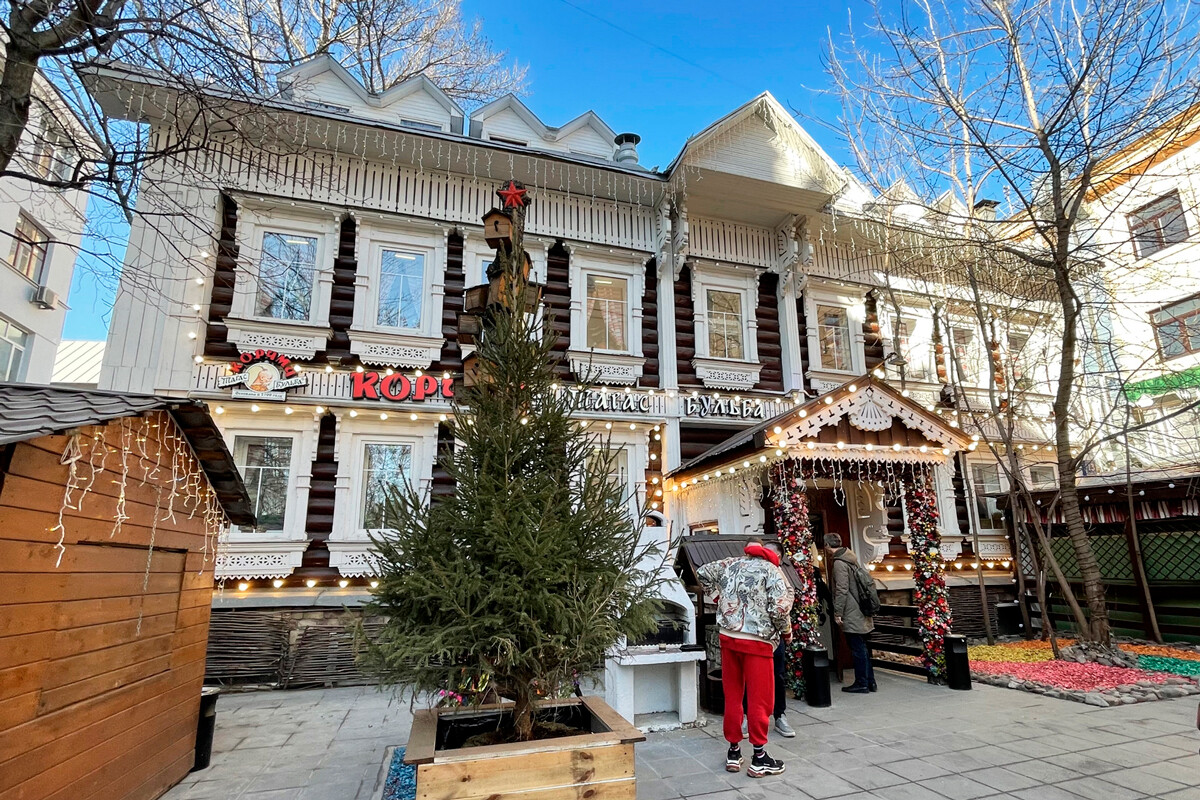 Ukrainians make up one of the largest diasporas in Russia - 2 to 5 million people, both Russian citizens and immigrants. Ukrainian is one of the top 10 most widely spoken languages in Russia, with the greatest number of its speakers residing in the north of the country: in Yamal and in Tyumen Region, where many gas and oil production sites are located. 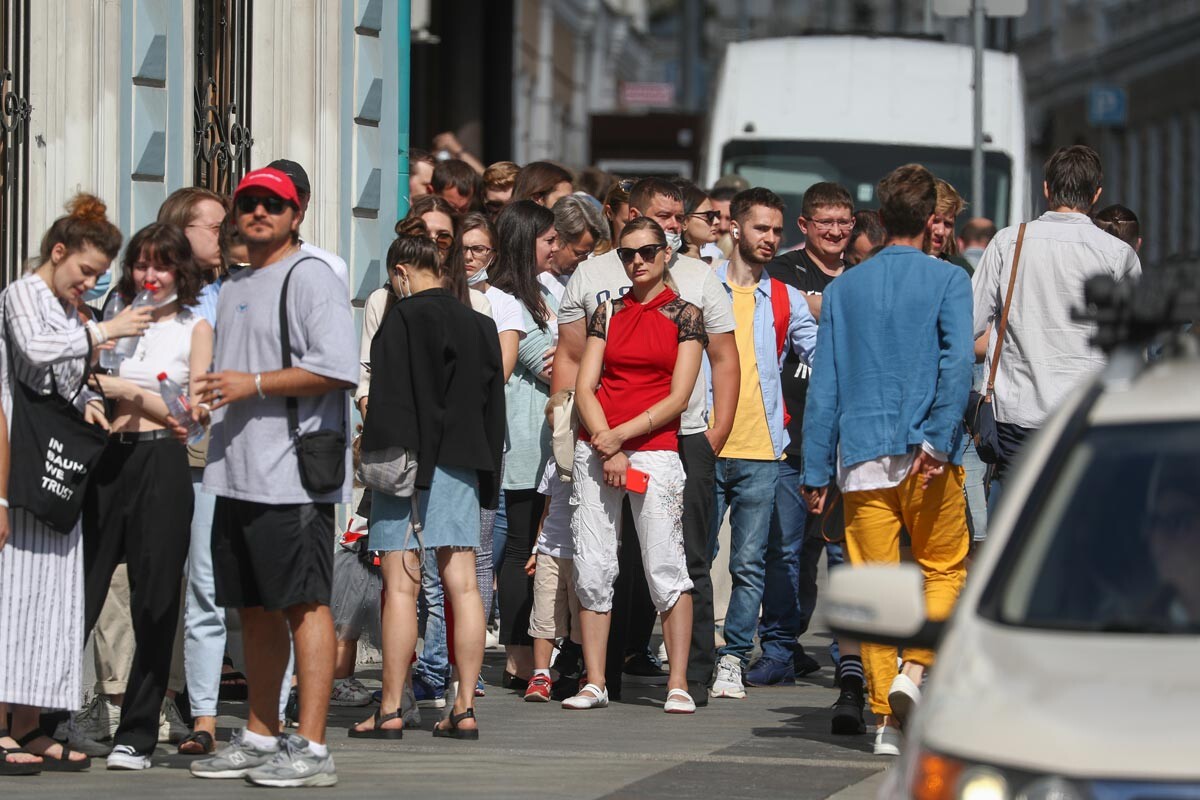 At the Belarusian embassy in Moscow during the elections in Belarus.

The Belarusian community in Russia numbers just over half a million people and it is the largest community of Belarusians abroad. Interestingly, the cultural centers of these people are located far from the border: in Novosibirsk, Samara, Yaroslavl and Nizhny Novgorod. 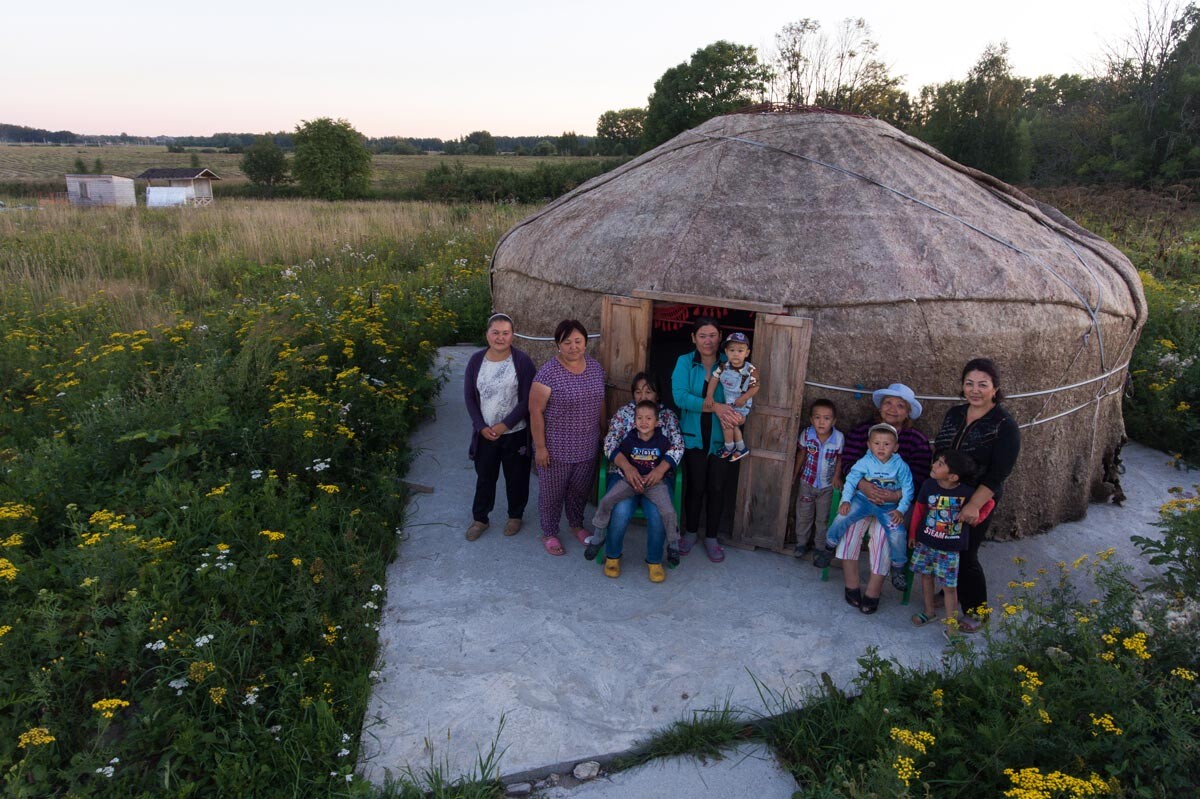 According to 2018 data, there are about 650,000 Kyrgyz people and 100 diasporas in Russia. “Southern Kyrgyz associate their future only with Russia. As a rule, one member of the family necessarily must work in Russia,” says Amir, owner of a beauty salon in Moscow.