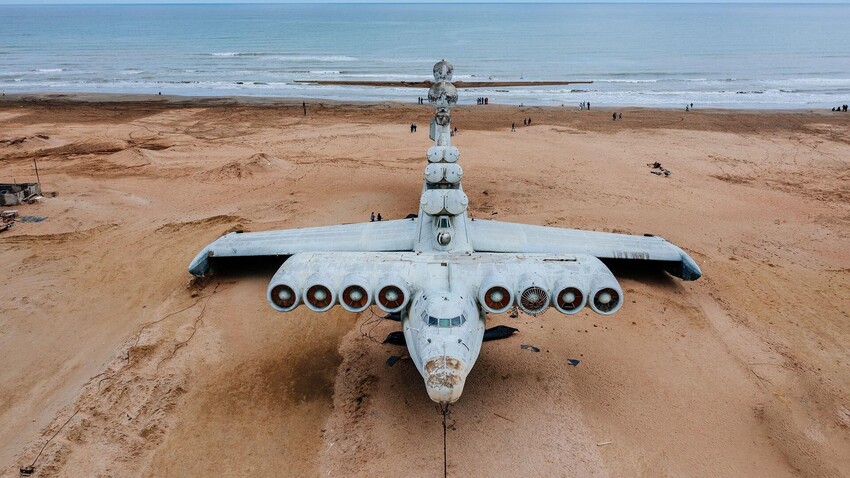 Legion Media
These include a haunted house, a ship cemetery and even an abandoned hadron collider.

1. A mountainous village in Dagestan 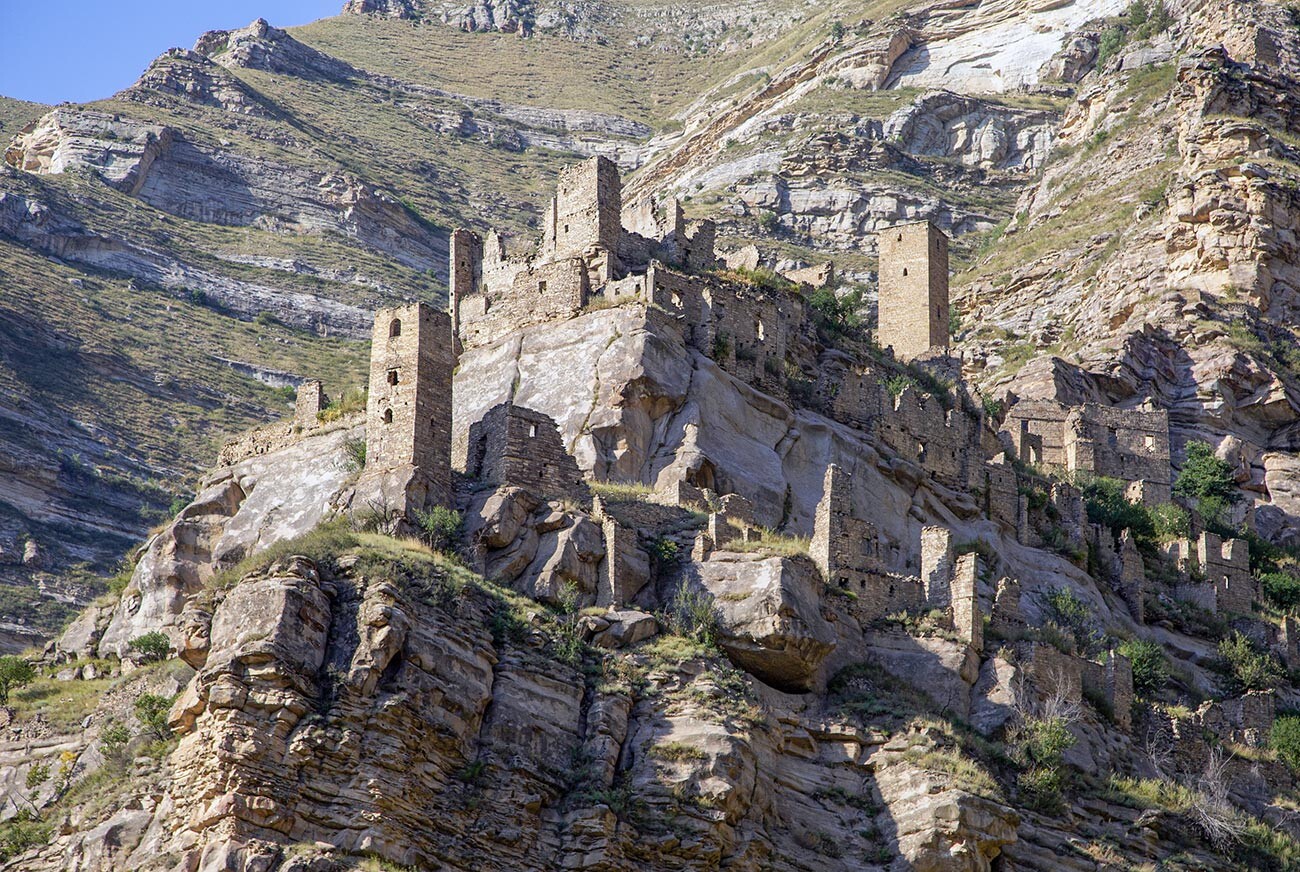 Kahib village is located 160 kilometers from Makhachkala, the capital of Dagestan. Its central part consists of the stone ruins built centuries ago on a steep mountainside overlooking the Kahibtlar River.

The ruins are blended into the landscape to a point where they visually merge with the rocks and blend in the environment. On a closer inspection, however, the old abandoned city appears in all its magnificence.

Historians believe these scenic houses and towers appeared in the 8th-10th centuries AD. People may have settled in this inaccessible area to repel invaders more effectively. 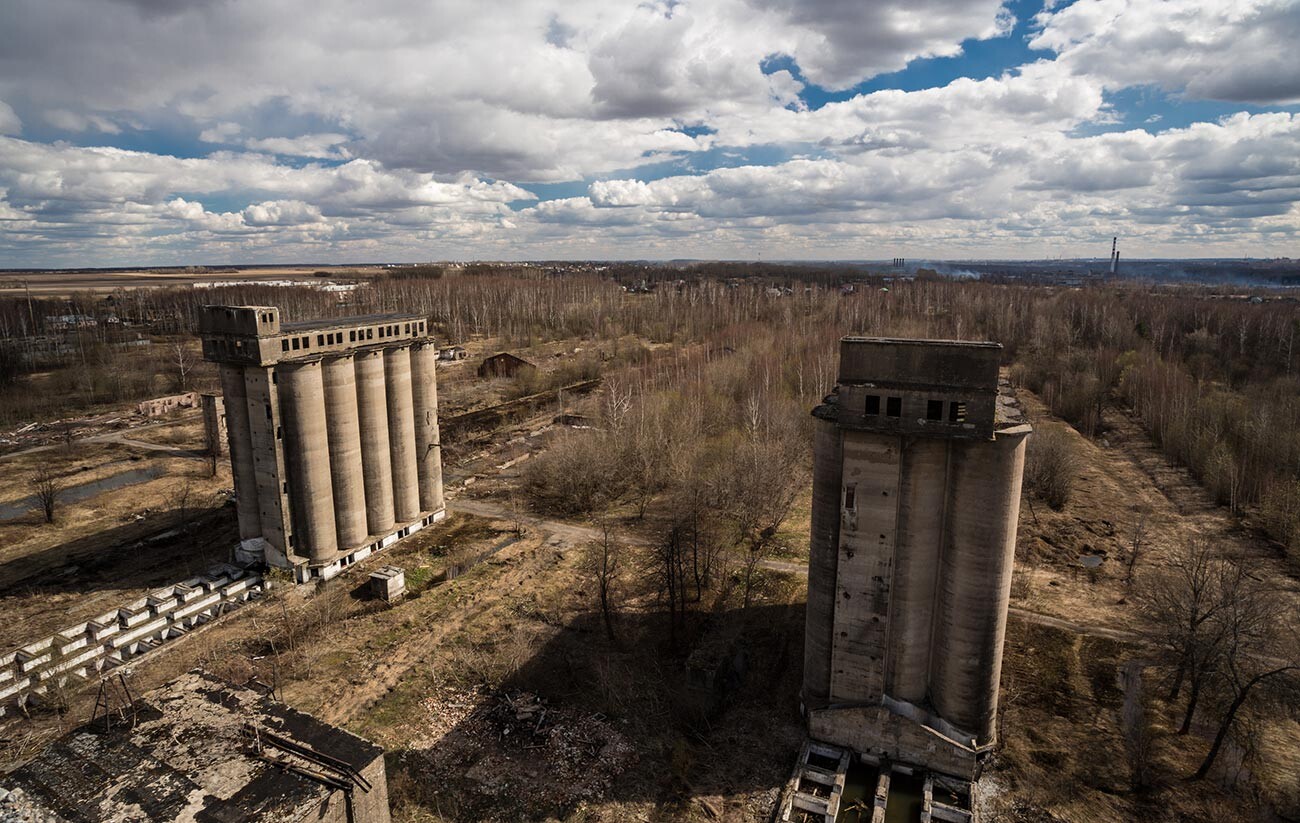 These eerie looking structures resembling a post-apocalypse movie set are nothing more than the remnants of the Soviet agriculture industry. During Soviet times, these giant concrete structures were used to store strategic reserves of grain and were, therefore, fenced off and closely guarded. Their precise locations were often classified. After the Soviet Union collapsed, many of these strategic structures were abandoned and eventually became dilapidated. Today, these abandoned towers attract occasional visitors.

3. A wingship on the Caspian Sea shore 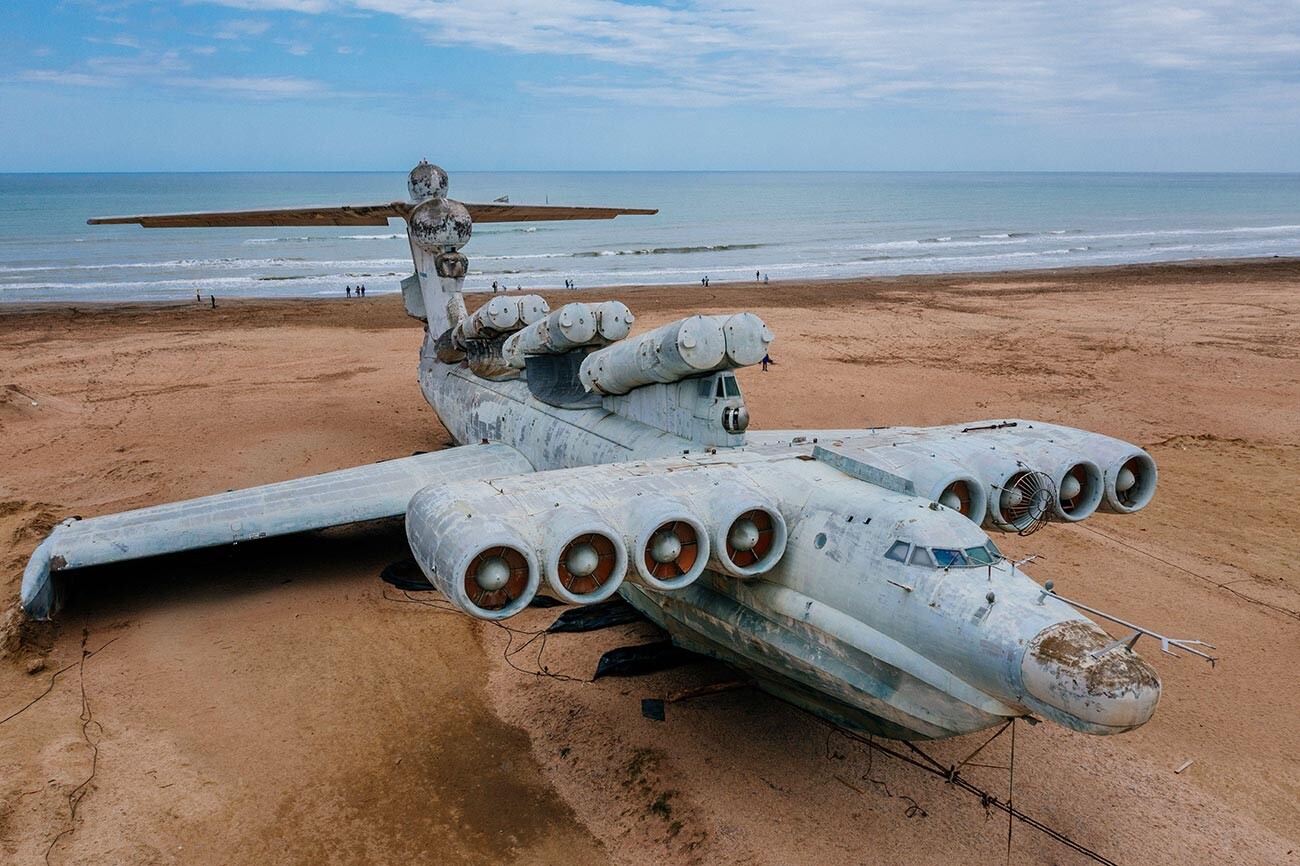 This Soviet-made ground-effect vehicle rests abandoned on the shore of the Caspian Sea in Dagestan, Russia. The unusual vehicle – known as the ‘Lun ekranoplan’ – used to be a Soviet military project abandoned at the break of the century.

The war machine was created to be used in combat against enemy aircraft carriers and it was supposed to fly close to the surface of the water, thus evading enemy radar systems.

4. A ship graveyard in Murmansk 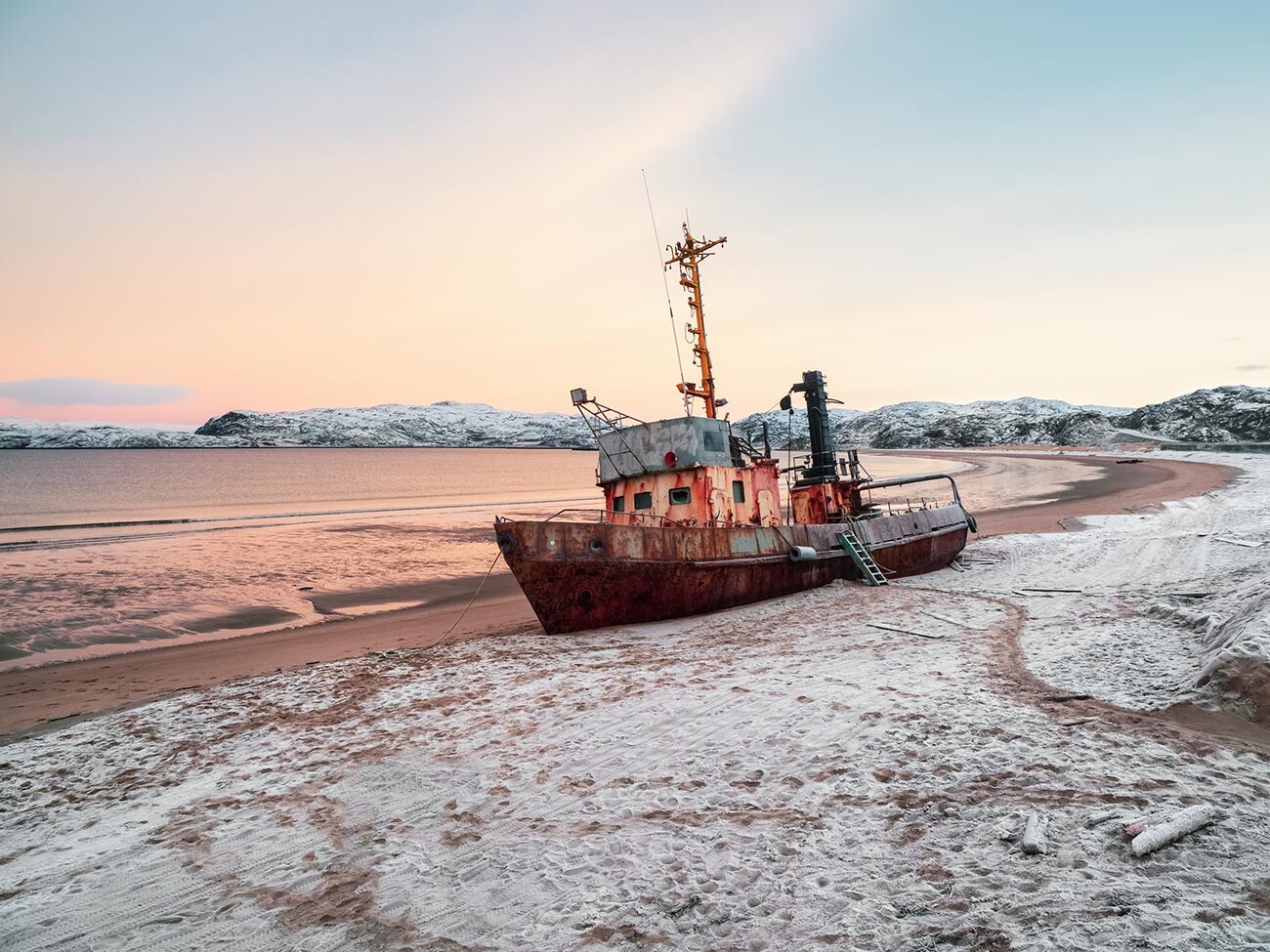 To “retire” some of its ships, Russia created a few “ship cemeteries” in the Arctic and Pacific oceans. Perhaps the most recognizable ship cemetery is located near the naval base of Russia’s Northern Fleet at Olenya Guba in Murmansk Region. There, dozens of decommissioned ships and even submarines rest after finishing active service in the military.

5. A diamond mine in Yakutia 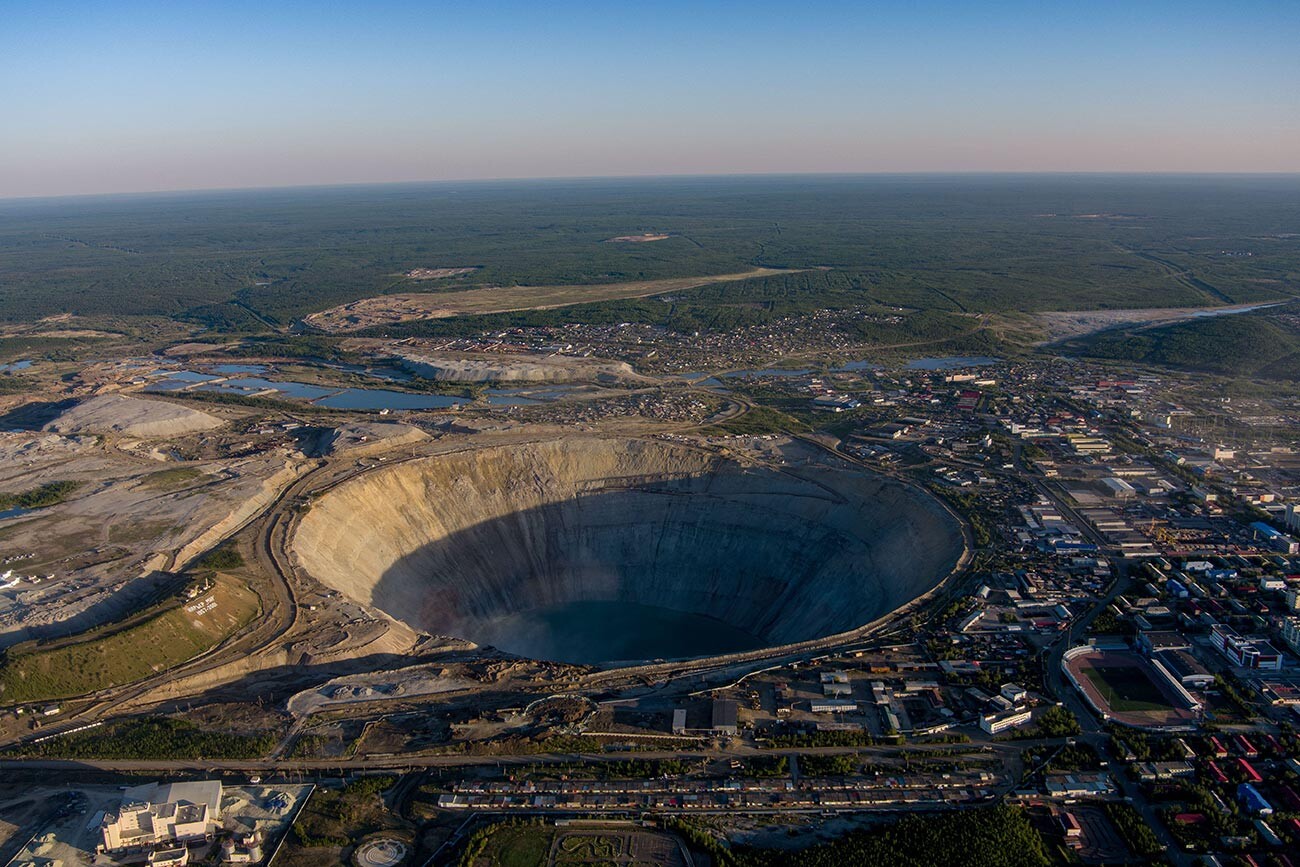 Soviet geologists discovered huge diamond reserves in Yakutia in the 1950s. The legend has it that, upon the vital discovery, they sent a coded message to Moscow: “We smoked the peace pipe. The tobacco is great.” Hence the diamond pit’s name: ‘Mir’ [the Russian word for ‘peace’], allegedly named so after the coded messege.

The ‘Mir’ diamond pit grew to be vast: more than 500 meters deep and 1,200 meters in diameter. At some point, developing and maintaining the pit became dangerous and the owner closed it, opting for a newer way to mine diamonds.

The giant open pit that had produced some $17 billion worth of diamonds before it was abandoned. In later years, architects attempted to utilize the open pit to design a project of a futuristic city under a dome, but their plans failed and the mine remains abandoned to this day.

6. A lighthouse on Sakhalin Island 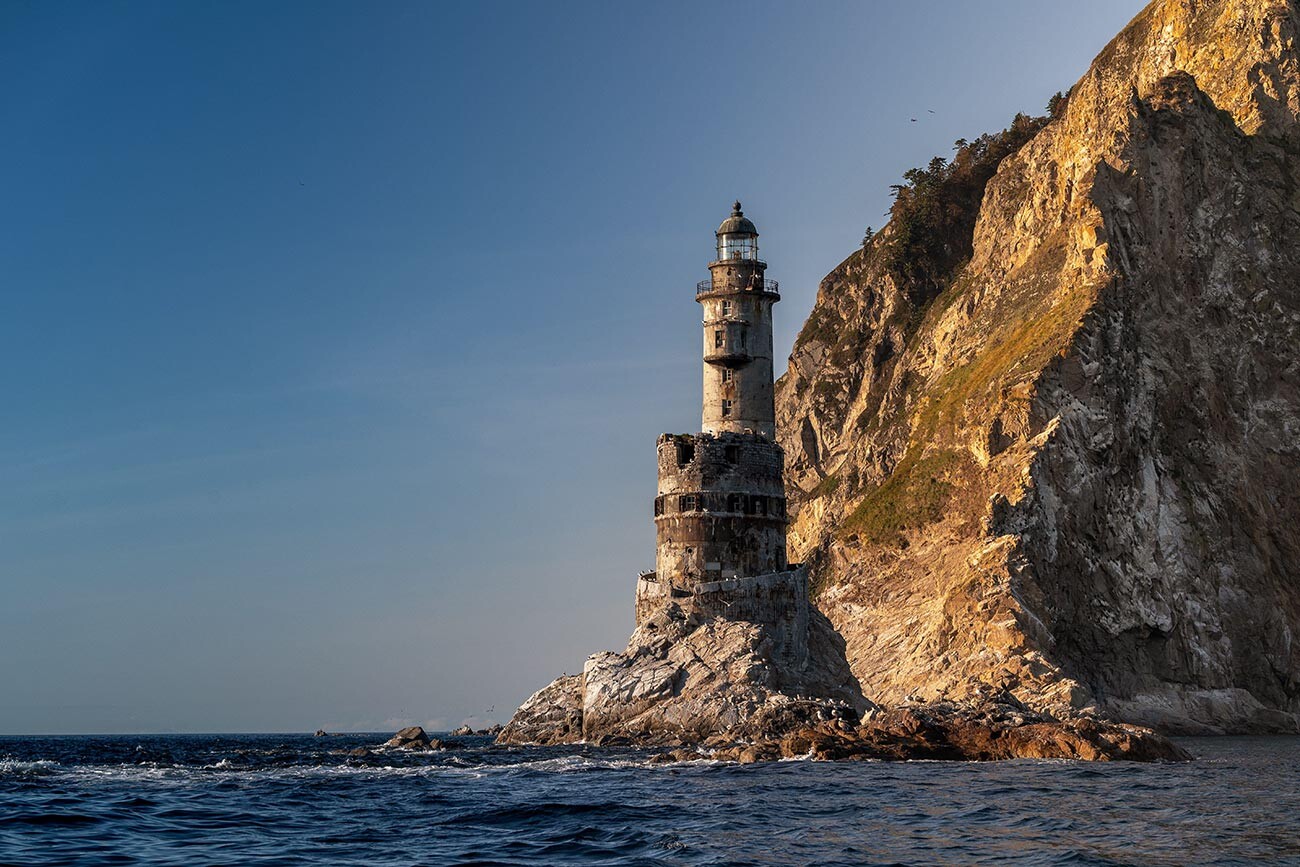 This magnificent abandoned lighthouse has been a tourist attraction for years. Built by the Japanese before the final days of World War II, the lighthouse stands on the Aniva Cape, on one of the most inaccessible places of the island.

Visitors say that the lighthouse may soon become dangerous to visit, as many of its parts have begun to severely deteriorate.

7. A ghost town in Magadan 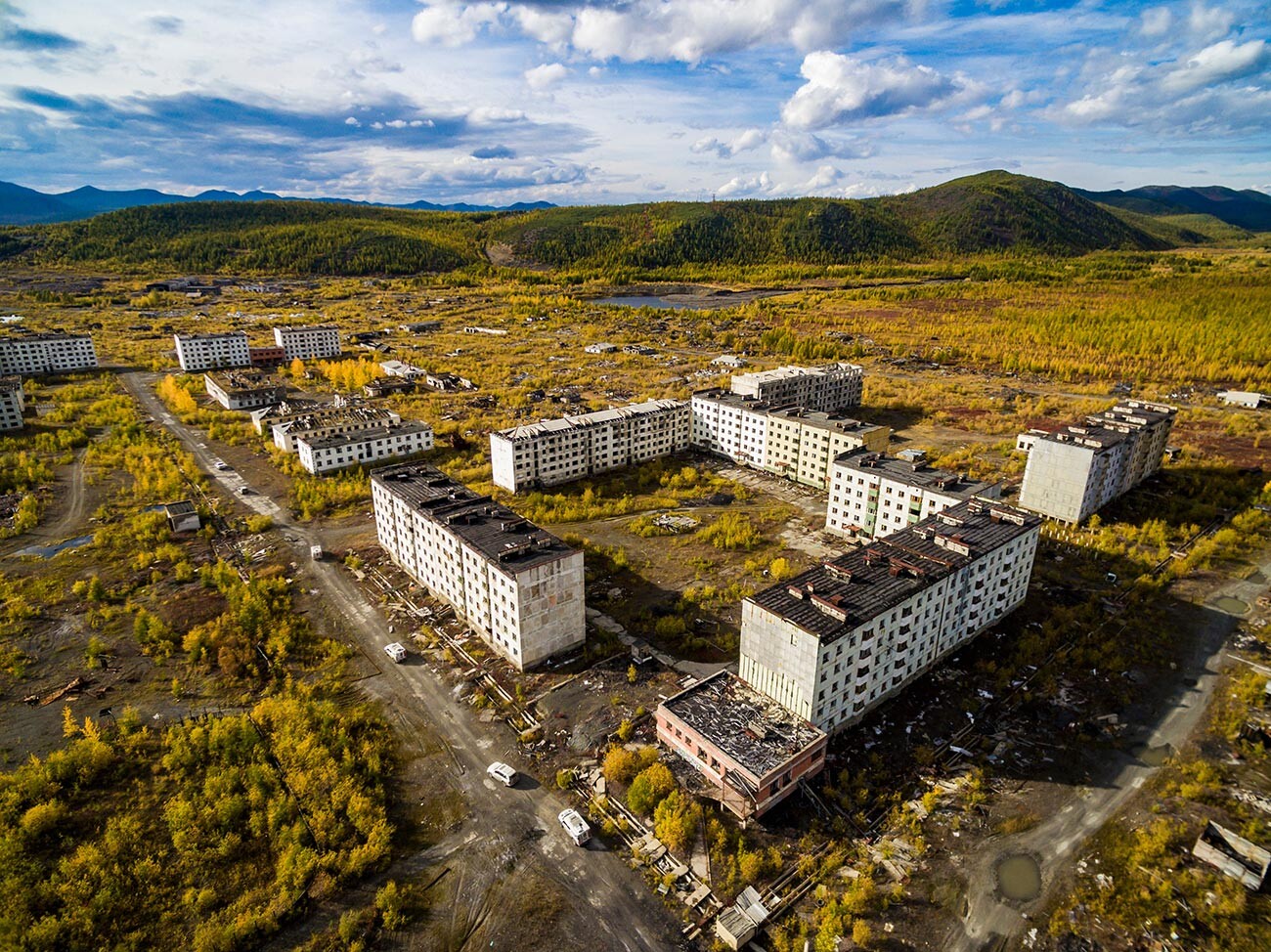 Ghost town Kadykchan was abandoned by residents after the authorities decided to close the nearby mines after a bad accident that left six workers dead. Remnants of the city built by Gulag prisoners in the 1940s stand akin sentinels in this eerie area. Although the ghost town was announced depopulated in 2010, rare travelers reported sighting a few residents who refused to leave.

8. A hadron collider in Moscow Region 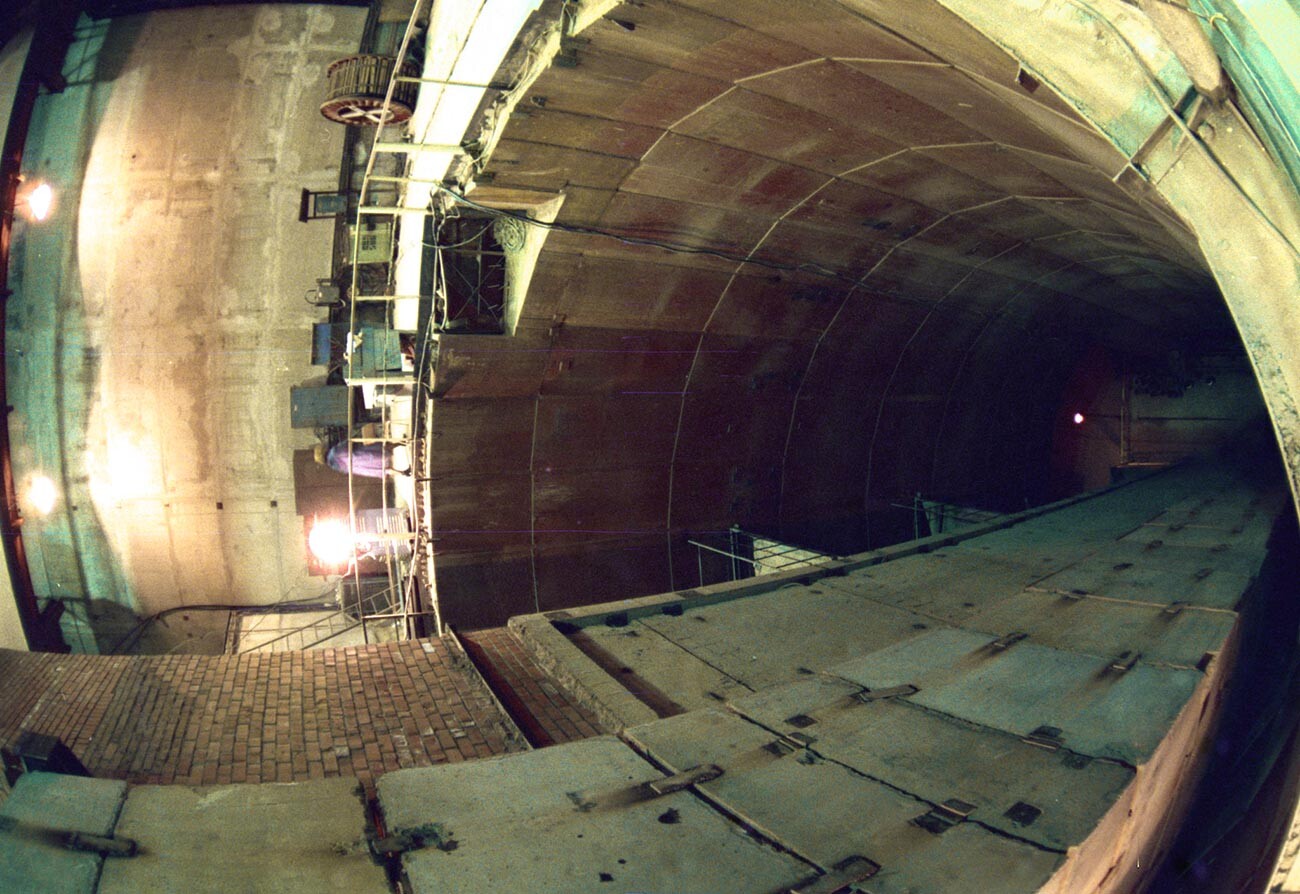 In the 1980s, Soviet scientists planned to build a hadron collider to study particles. The project required a lot of digging: massive tunnels were constructed underneath the city of Protvino, Moscow Region. When the project stalled after the collapse of the Soviet Union and subsequent lack of funding, the tunnels were also abandoned. They lie 60 meters deep and exceed 20 kilometers in length that attract fans of industrial tourism who go down at their own risk.

9. A Hydroelectric Power Plant in Altai 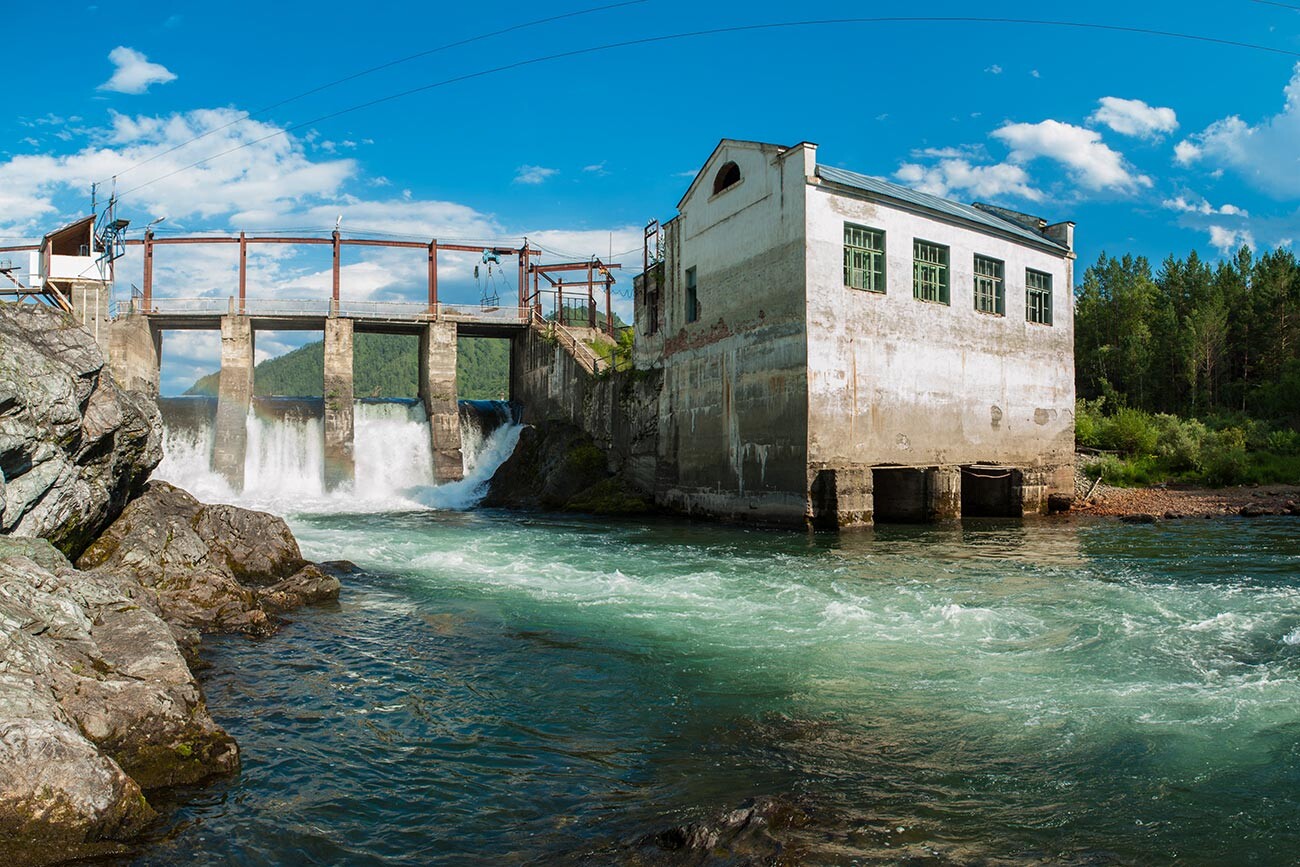 The Chemalskaya Hydroelectric Power Plant was built in 1935 by some 700 prisoners. An accident happened on the plant in 2010; the structure was partially flooded. Since then, the plant has been out of operation. Sometimes, tourist groups visit the abandoned plant. 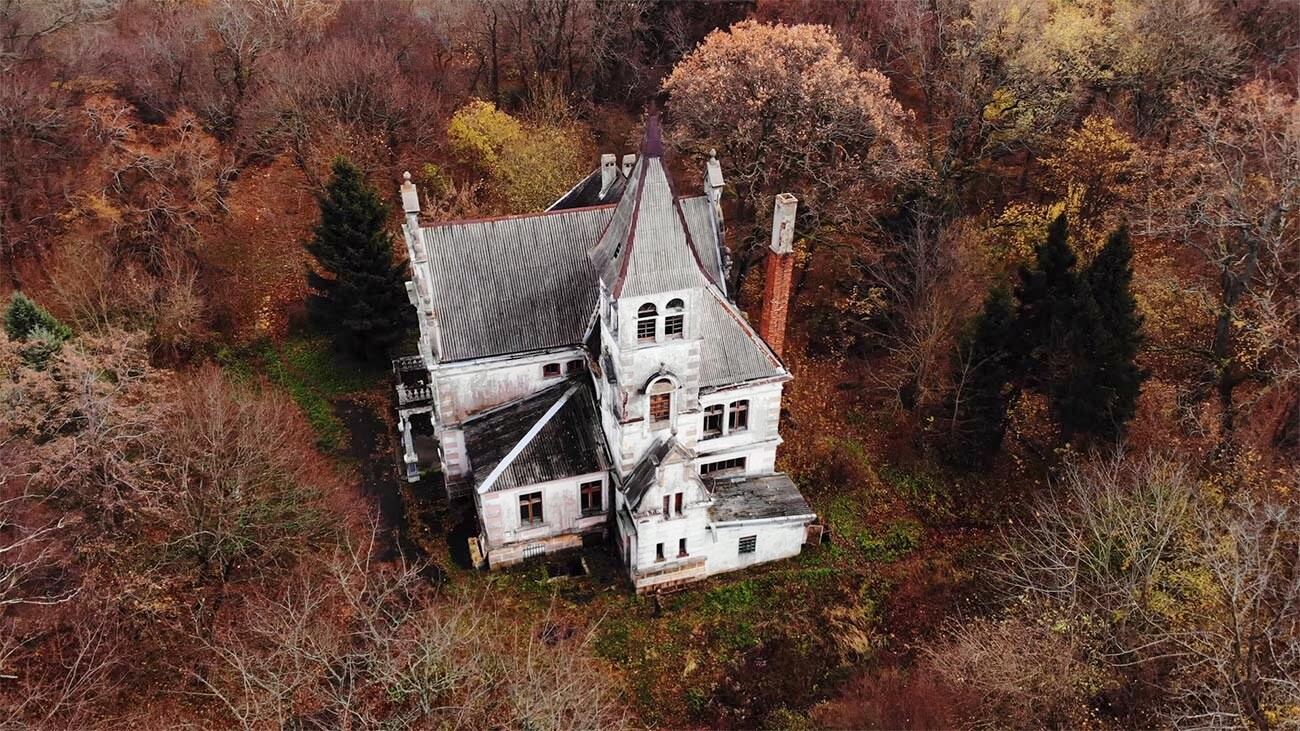 There is a ghostly looking villa in the city of primorsk in Kaliningrad Region. It was built around 1905, when the city was known by its German name, Fischhausen.

Its owner, a successful businessman, purchased over 100 hectares of land and constructed a mansion of 13 rooms with a basement and attic. When the city became a Soviet territory after World War II, the building was transferred to the Soviet Ministry of Defense and turned into a sanatorium where tuberculosis was treated.

Today, the villa stands abandoned and eerie, resembling a haunted mansion from a typical horror movie.