The most unusual gravestones in Moscow cemeteries (PHOTOS) 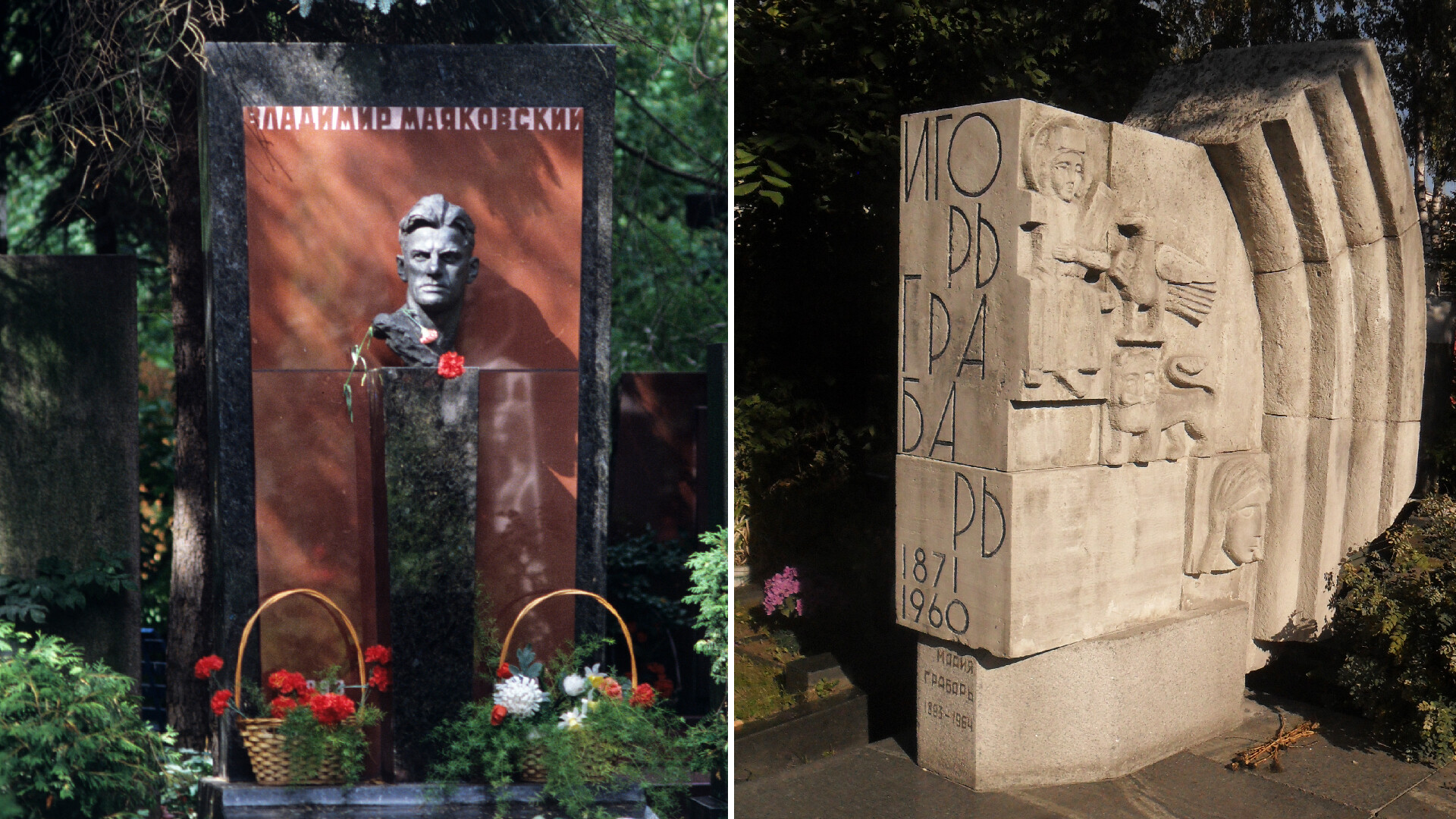 Vyacheslav Bobkov/Sputnik; SerSem (CC BY-SA 4.0)
Burial sites of famous people in Russian cemeteries are often marked by a wide variety of magnificent gravestones and monuments. Some literally are works of art. The most famous can be found in Novodevichy Cemetery and Vagankovo Cemetery, where many renowned actors, writers, and politicians rest eternally. 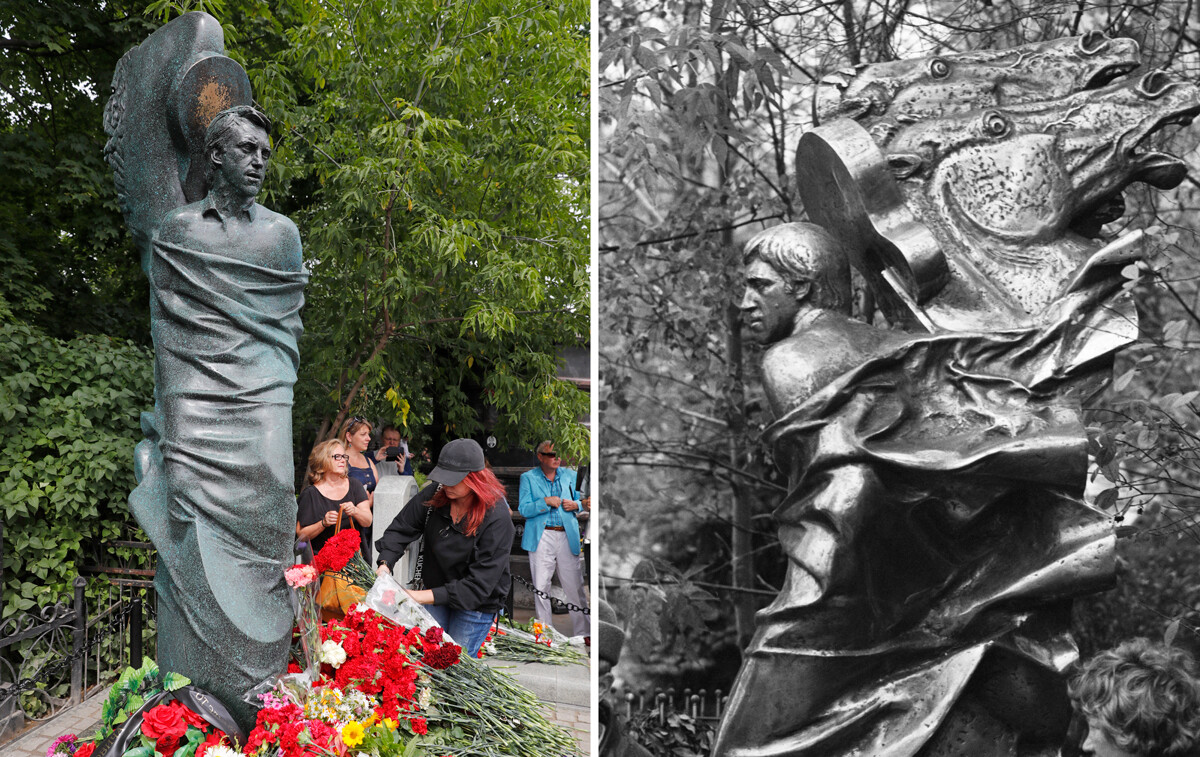 The death of the popular 42-year-old actor and musician shocked millions of Soviet citizens. Sculptors Alexander Rukavishnikov and architect Igor Voznesensky won the contest for the best monument design. The inspiration for their tombstone project was one of Vysotsky’s most famous songs, "Capricious Horses", (Кони привередливые - Koni priveredlivye). Vysotsky himself is depicted with a guitar; the horse head behind him resembles wings. This sculpture in Vagankovo Cemetery embodies Vysotsky’s unique singing style – manly and full of tension. 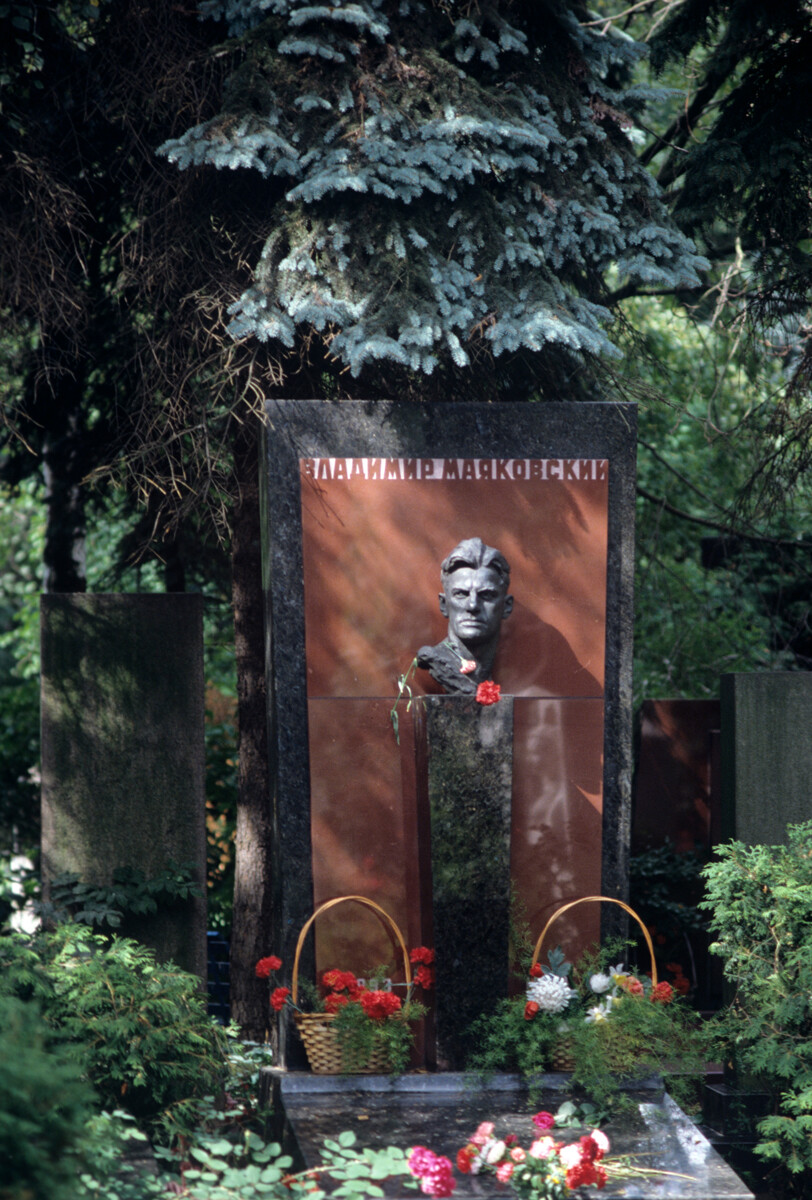 Many streets in Russian cities are named after Mayakovsky. He was a star of Soviet avant-garde poetry, but he left this world very early. At the age of just 36 he committed suicide, though the reasons behind that are debated to this day. The stone monument on Mayakovsky’s grave in Novodevichy Cemetery was made by sculptor Alexander Kibalnikov in revolutionary red and with a minimalist futuristic style. 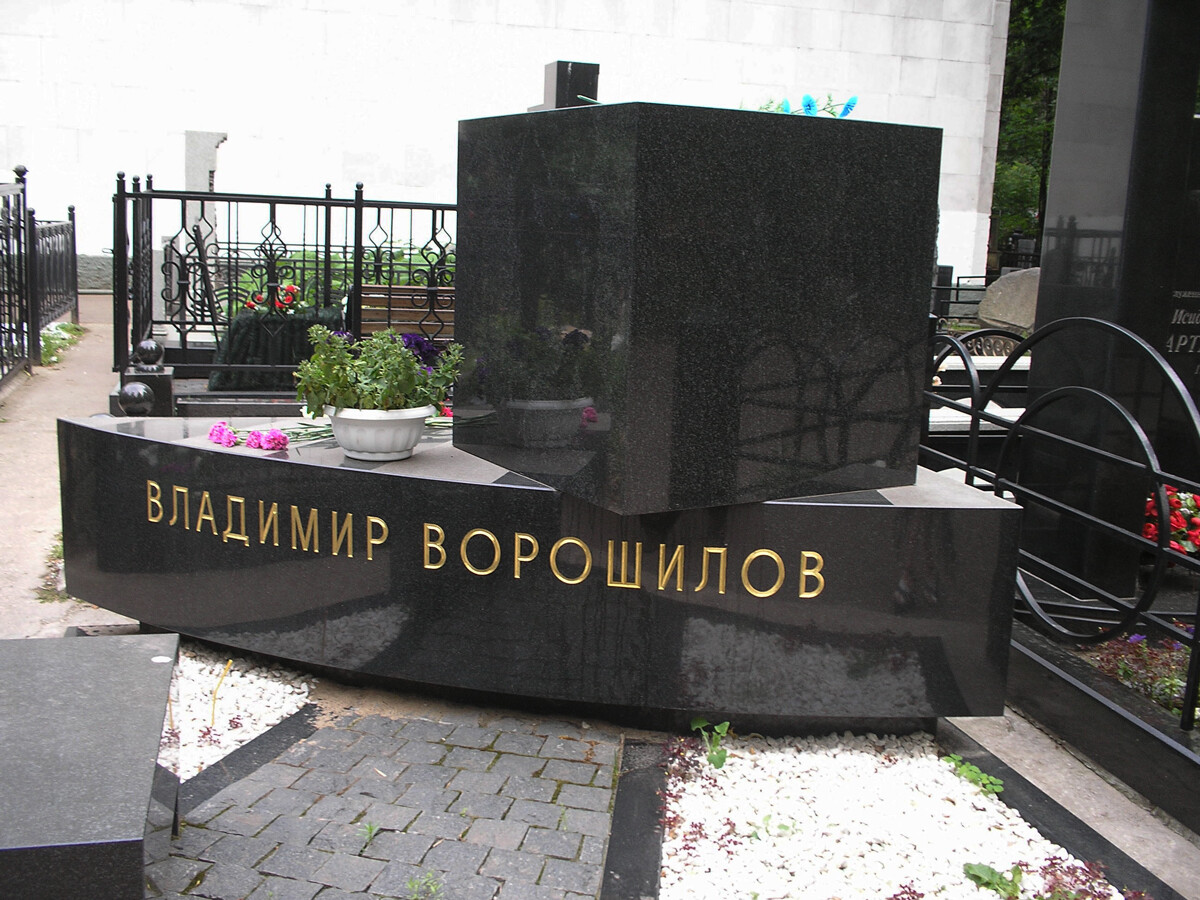 A black granite cube stands on the grave of Vladimir Voroshilov at Vagankovo Cemetery. This is a tribute to his achievements as the creator and host of the iconic intellectual TV game show What? Where? When? («Что? Где? Когда?»). One of the show’s puzzles has always been a “black box” with an item inside; the participants have one minute to guess what is hidden there. The tombstone was made by architect Nikita Shangin who was once a show participant. 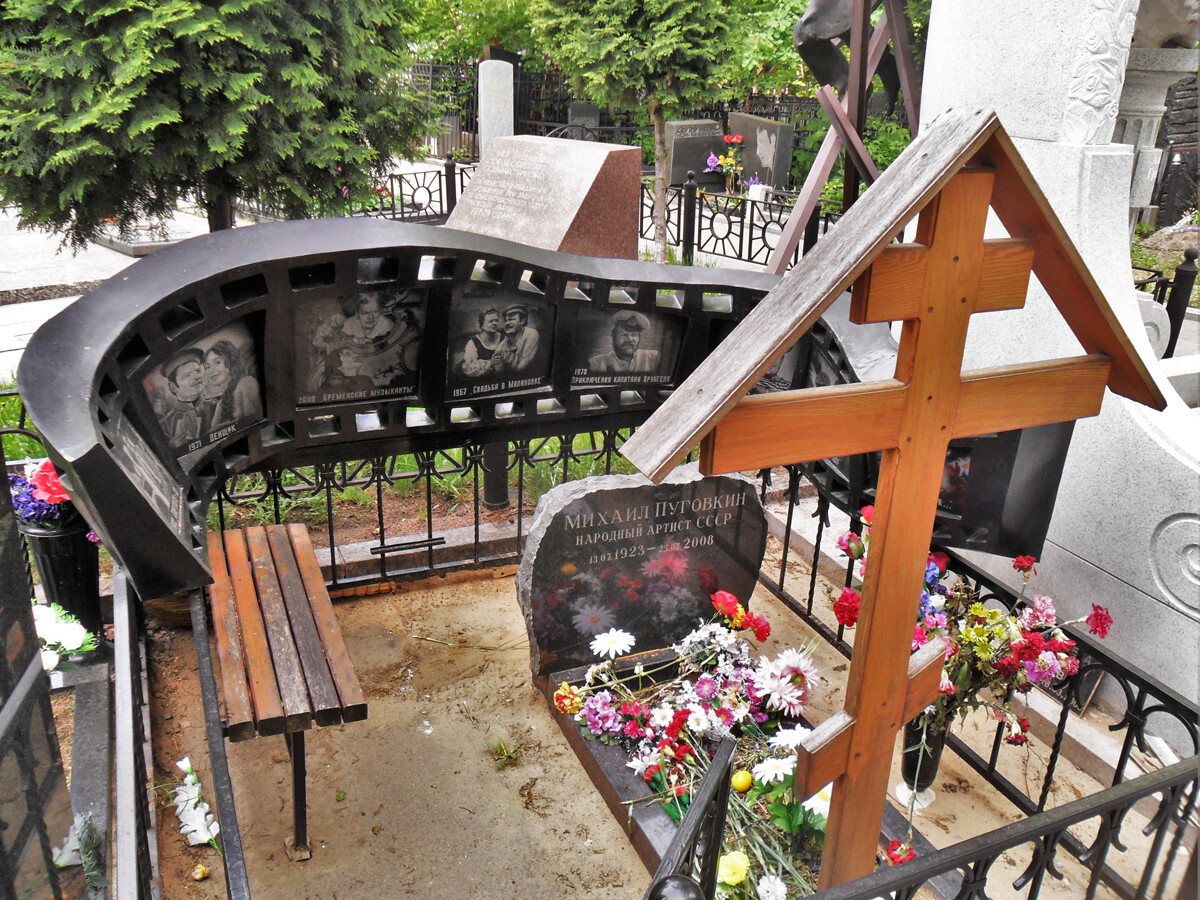 On this famous Soviet actor’s grave in Vagankovo Cemetery stands a monument in the form of a film reel that features frames from his most iconic movies. Among them are - Wedding in Malinovka, The New Adventures of Captain Wrongel, Private Ivan, Fire, Water, and Brass Pipes, and others. 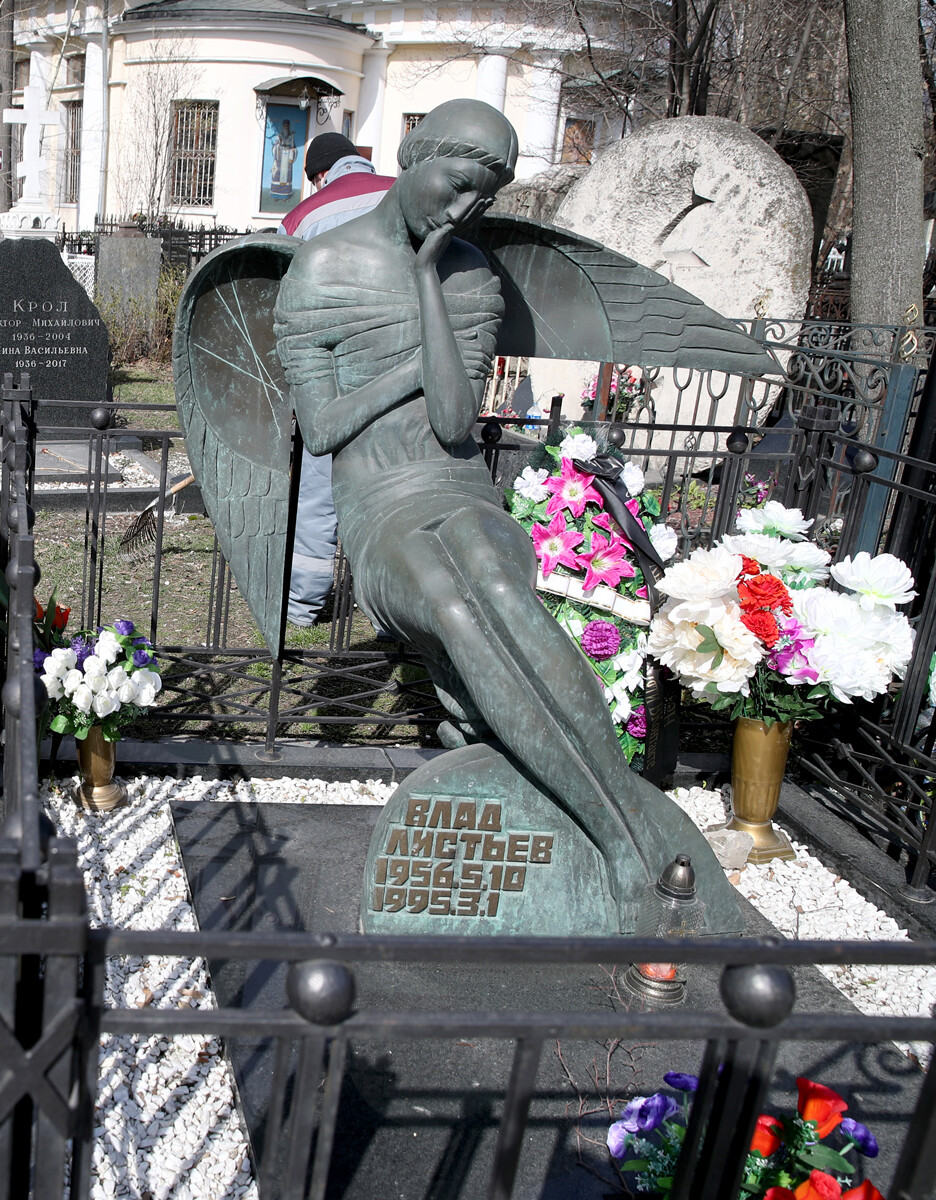 The murder of the leading TV journalist of the 1990s shocked Russia; and his case still remains unsolved. His tombstone in Vagankovo Cemetery is sculpted in the form of a bronze angel, full of sorrow and covering its face with a palm. 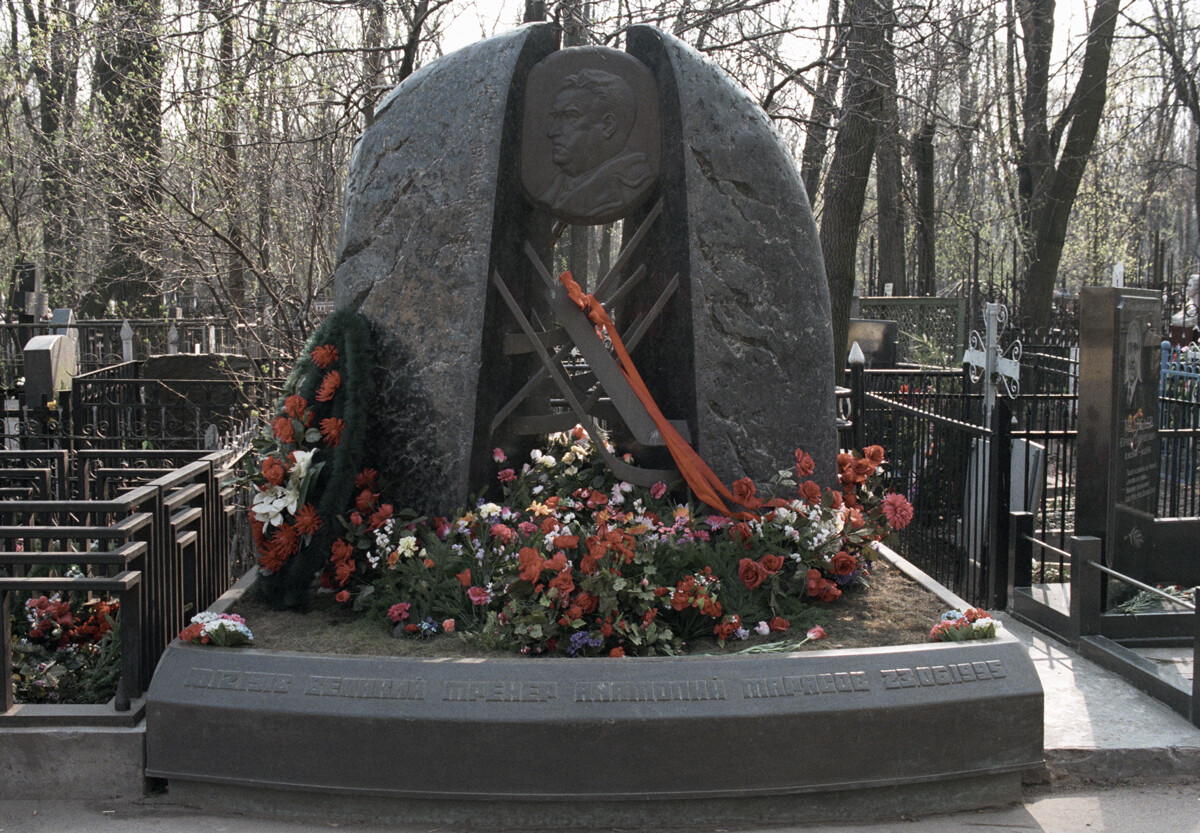 The iconic Soviet athlete and coach, dubbed the “father of Russian hockey”, led the USSR’s national team to a record nine-year win streak in international tournaments. His personality was also captured in a popular movie, Legend No. 17, played by actor Oleg Menshikov. An entire sculptural composition adorns the grave of Tarasov at Vagankovo Cemetery. Two parts of a granite block are bound together with ice hockey sticks, as the coach’s profile is nestled between them. 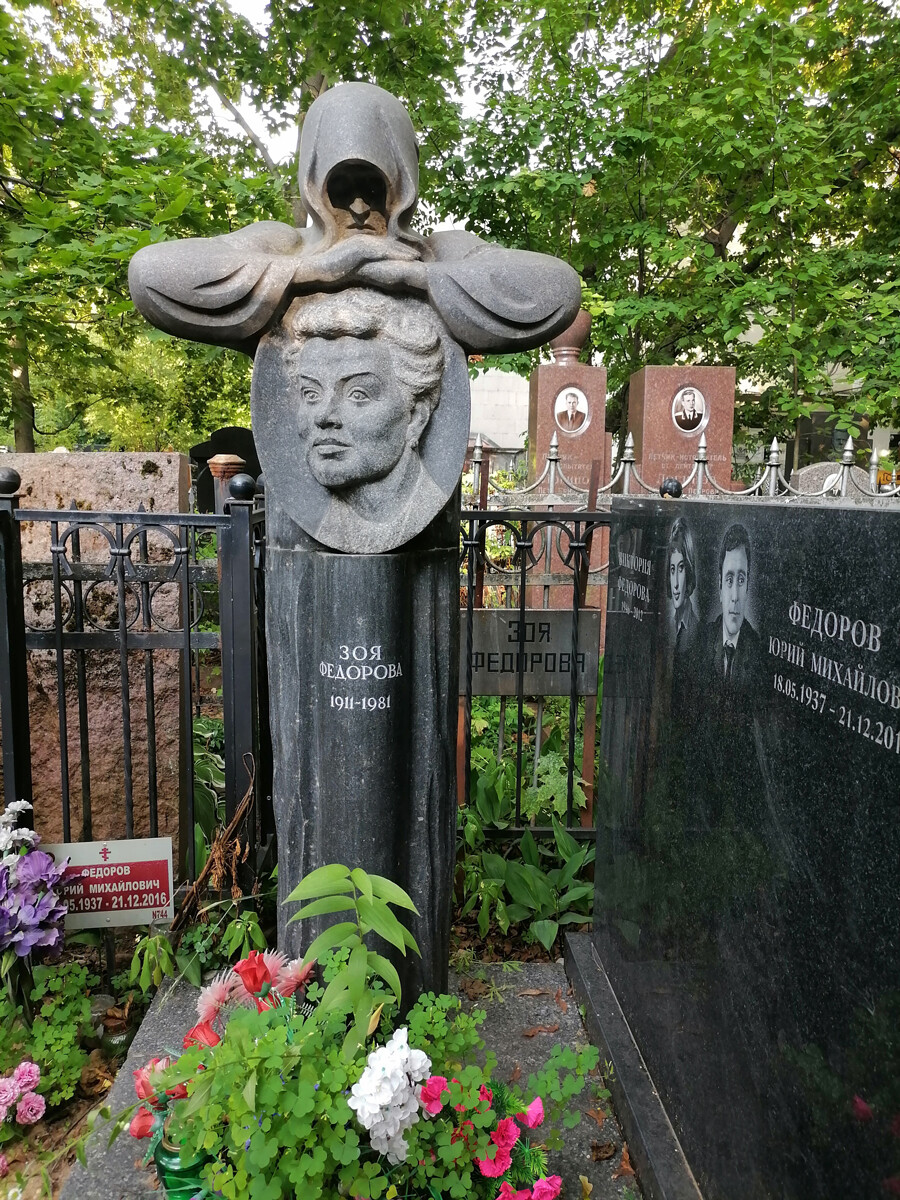 The fate of the famous Soviet actress Zoya Fyodorova is quite dramatic – during Stalin’s times she had an illicit relationship with a U.S. naval attaché, Jackson Tate, from whom she gave birth to a daughter. Because of this affair, she was accused of being a spy, landing her 10 years in prison camps. The shadowy figure looming over the actress’ bas-relief portrait on her grave in Vagankovo Cemetery represents her mysterious death. Fyodorova was shot in her own apartment. According to rumors, the KGB ordered her murder. 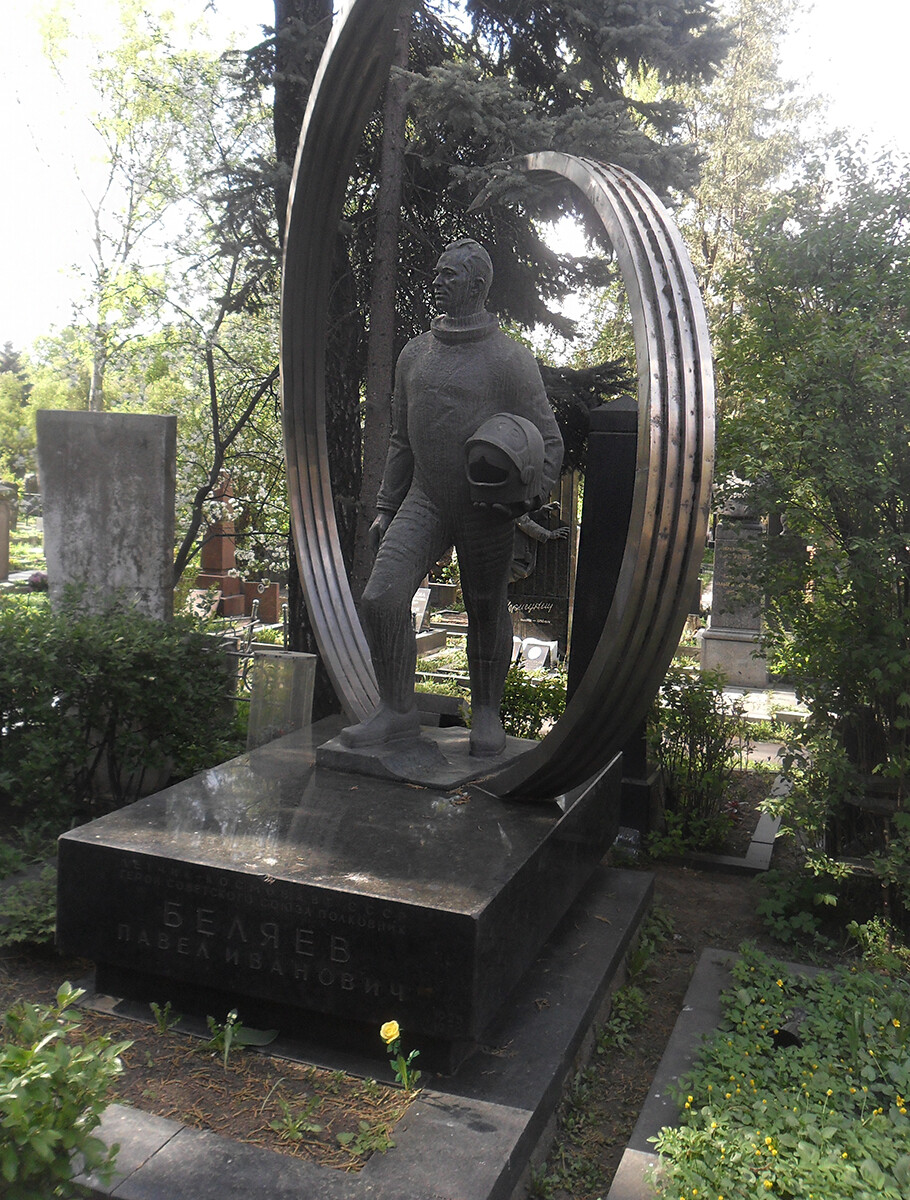 Hero of the Soviet Union and one of the first Soviet astronauts, Pavel Belyayev was the crew commander when Alexei Leonov conducted mankind’s first ever spacewalk. Later, Belyayev became the first astronaut to pilot a spaceship on manual control. The monument on his grave in Novodevichy Cemetery shows him in a space suit and holding a helmet; the spiral around his bronze figure symbolizes outer space. 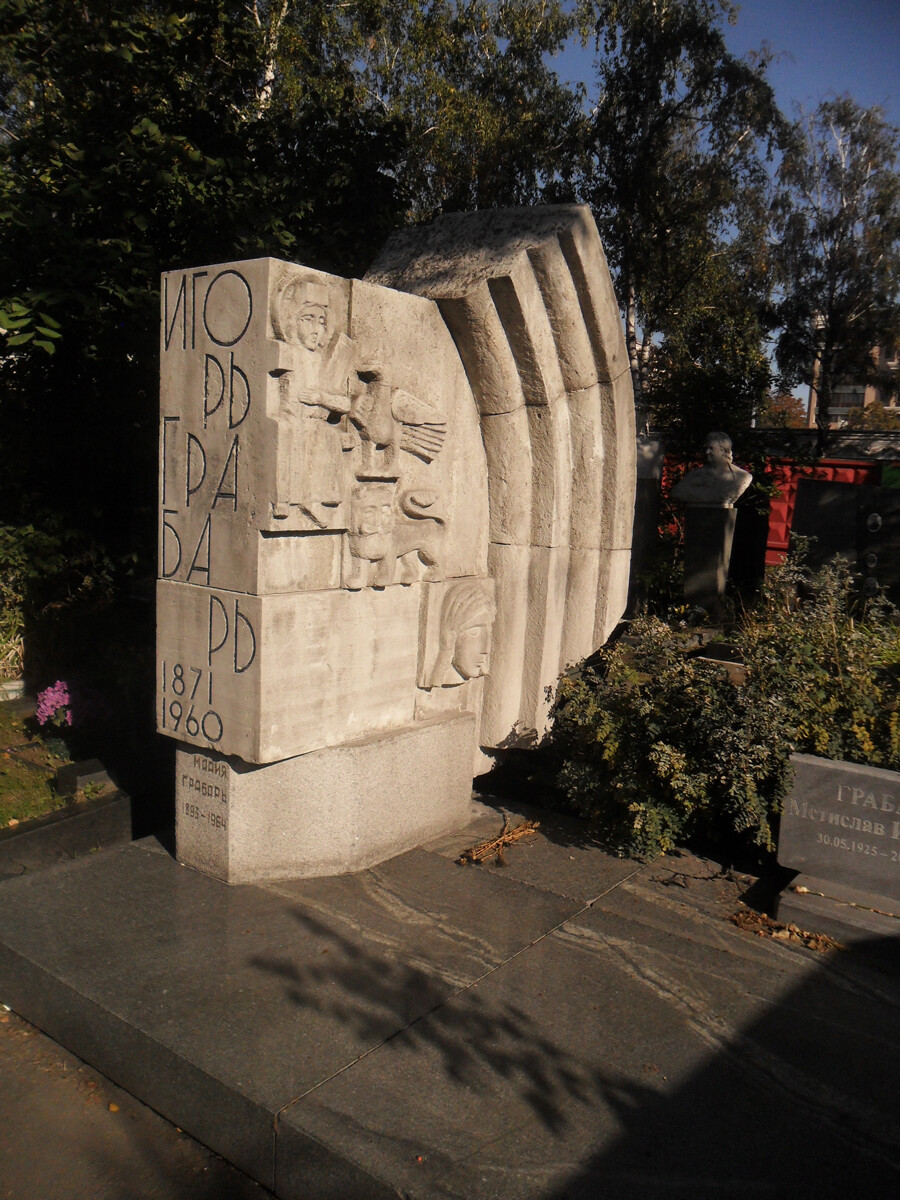 Grabar was the most famous Soviet art conservator. Among the many medieval Russian art masterpieces that he rescued is The Trinity, the world-renowned icon by Andrei Rublev. On his grave in Novodevichy Cemetery stands a tombstone representing a white stone wall, boasting the bas-relief images of a lion, a bird, and other symbols of iconography and ecclesiastical art. 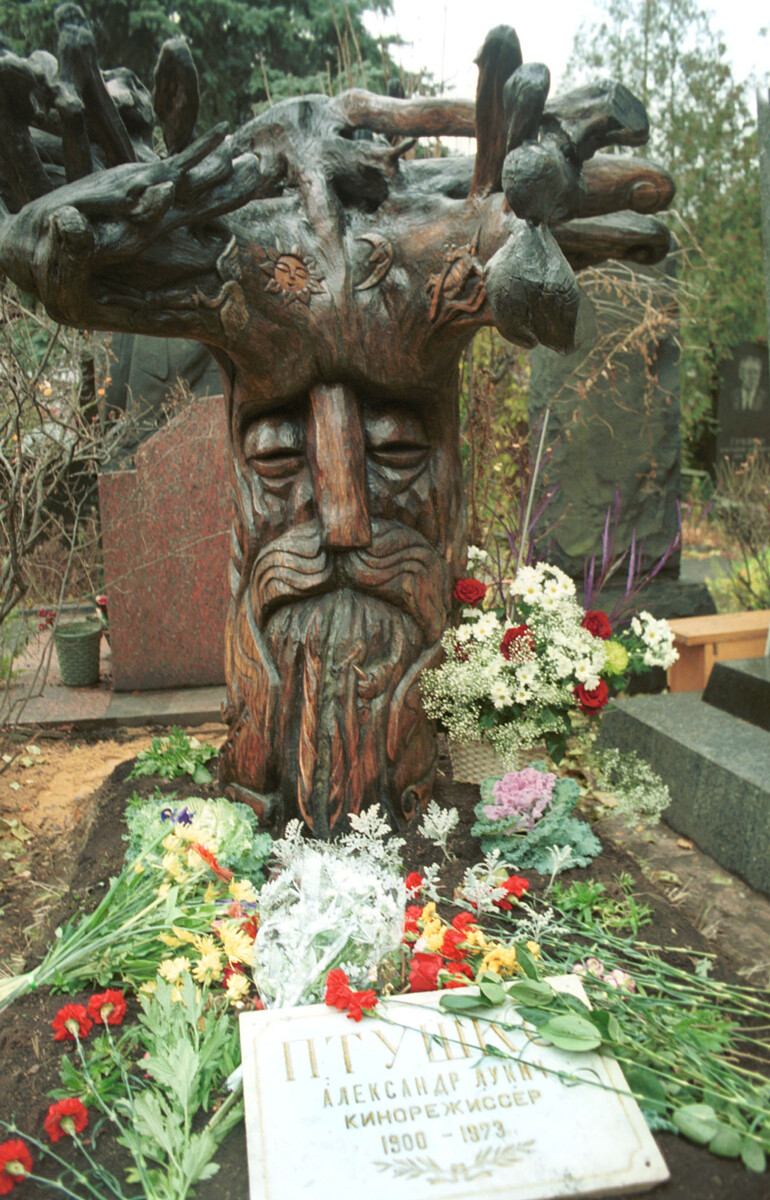 Ptushko is known as the “Russian Walt Disney” – he was responsible for iconic animations such as The Golden Key, The Tale of Tsar Saltan, and Ruslan and Ludmila. His tombstone monument at Novodevichy Cemetery was erected to commemorate the director’s 100th birthday. The work of artist Vyacheslav Pochechuev is sculpted in the form of an upside-down, roots-up fairy-tale oak tree, reminiscent of Ptushko’s cartoons. 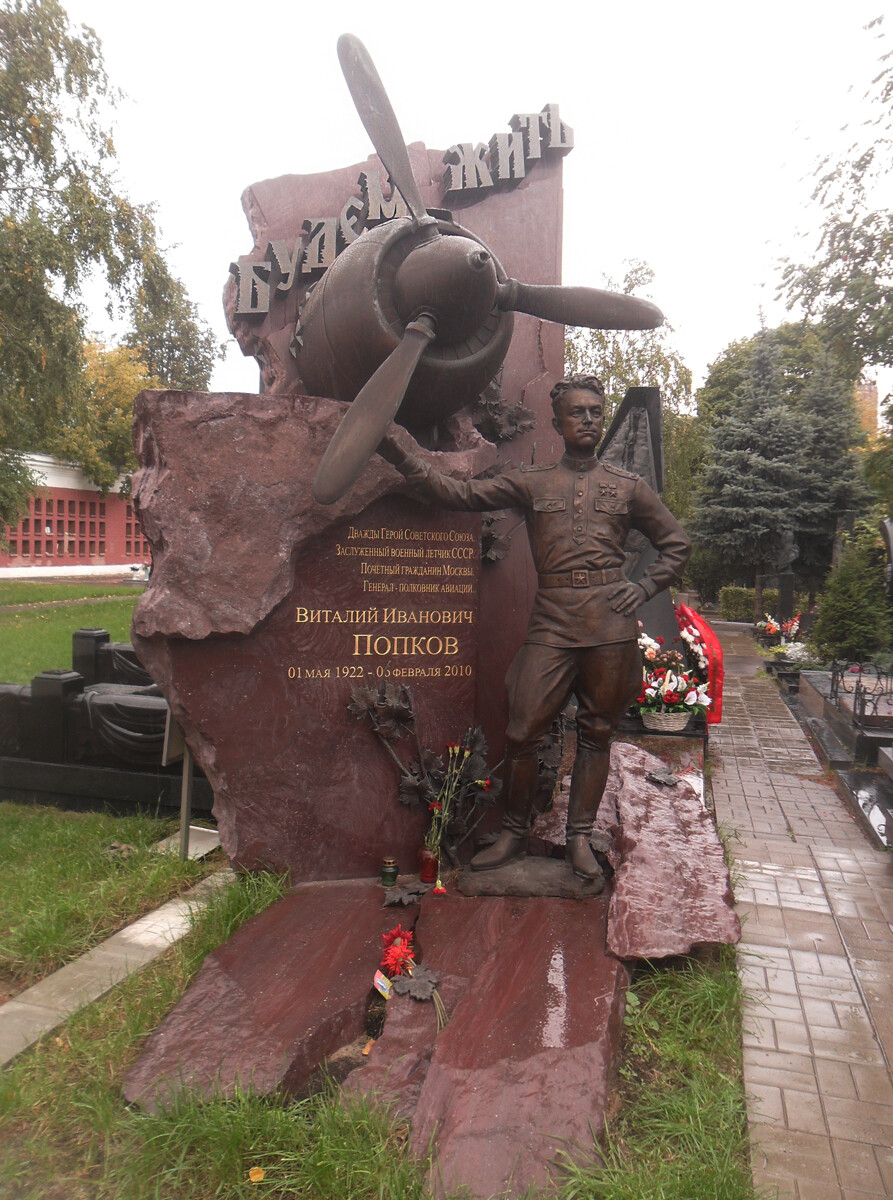 The legendary Soviet World War II hero is famous for creating an amateur jazz orchestra in his flight squadron. Because of that, he was the prototype for the main character of the iconic Soviet movie Only Old Men Go Into Battle. On his tombstone in Novodevichy Cemetery, he’s depicted with an airplane propeller and the motto from the movie, “We’ll live.” 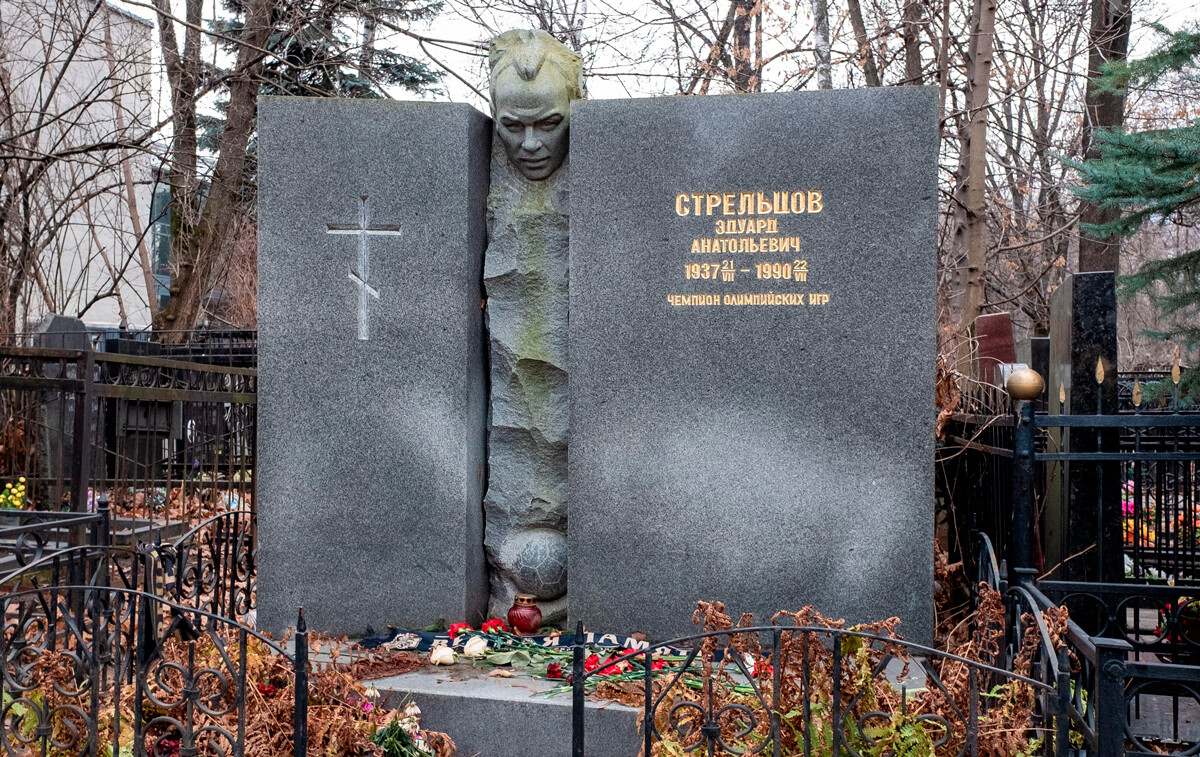 An entire stadium in Moscow is now named after Streltsov. He played forward for Torpedo Moscow and was an Olympic champion as part of the Soviet national team. His biography had not only athletic highs but also personal lows – he spent 12 years in prison on controversial  charges, after which he still managed to continue his soccer career. An interesting sculpture  stands on Streltsov’s grave in Vagankovo Cemetery – the face of the athlete and a football appear as though suspended between two granite slabs.