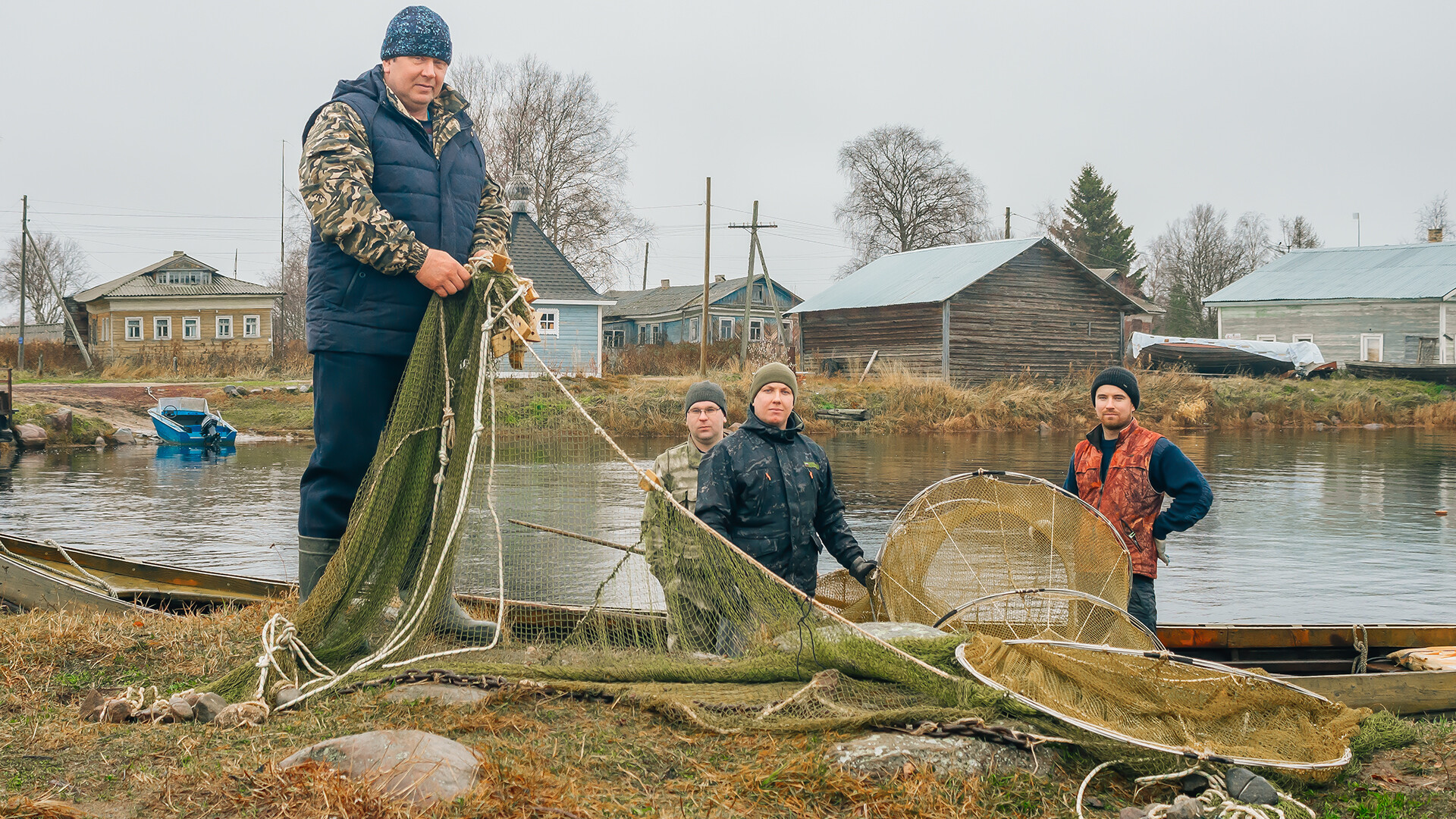 Pavel Kuzmichev
The Pomors are ordinary Russian people who settled near the Arctic Ocean back in the 14th century to fish. Although the world has changed a lot, the whole village still maintains its traditional way of life and fishing. 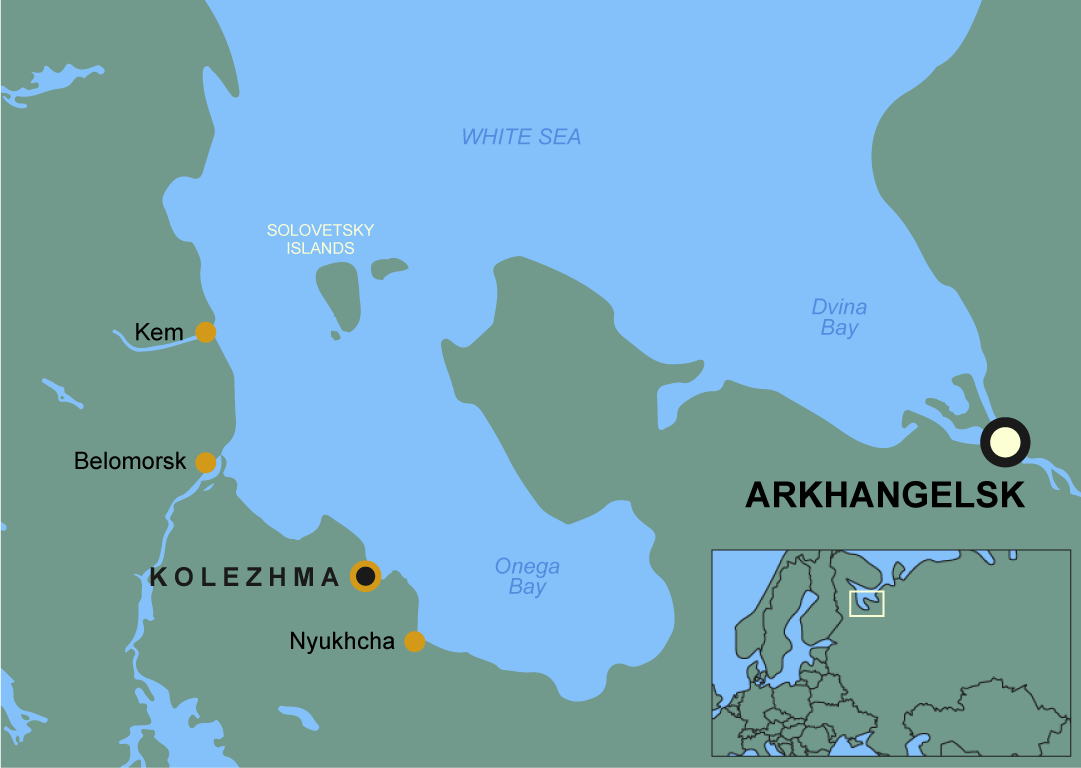 “The fishermen wake up very early in the winter, while it’s still dark outside. They ride their snowmobiles to the sea and work until the evening,” says Ivan Egorov, leader of the fishing collective farm ‘Zarya Severa’ on his way to Kolezhma, an old Pomor village on the White Sea shore. “And they do this every day, from December till March.” It is the saffron cod season, the main fish caught in this region. It is hard work. The frosts and winds are severe at this time of year. It can be -30°C or -40°C and the humid air makes it even colder. 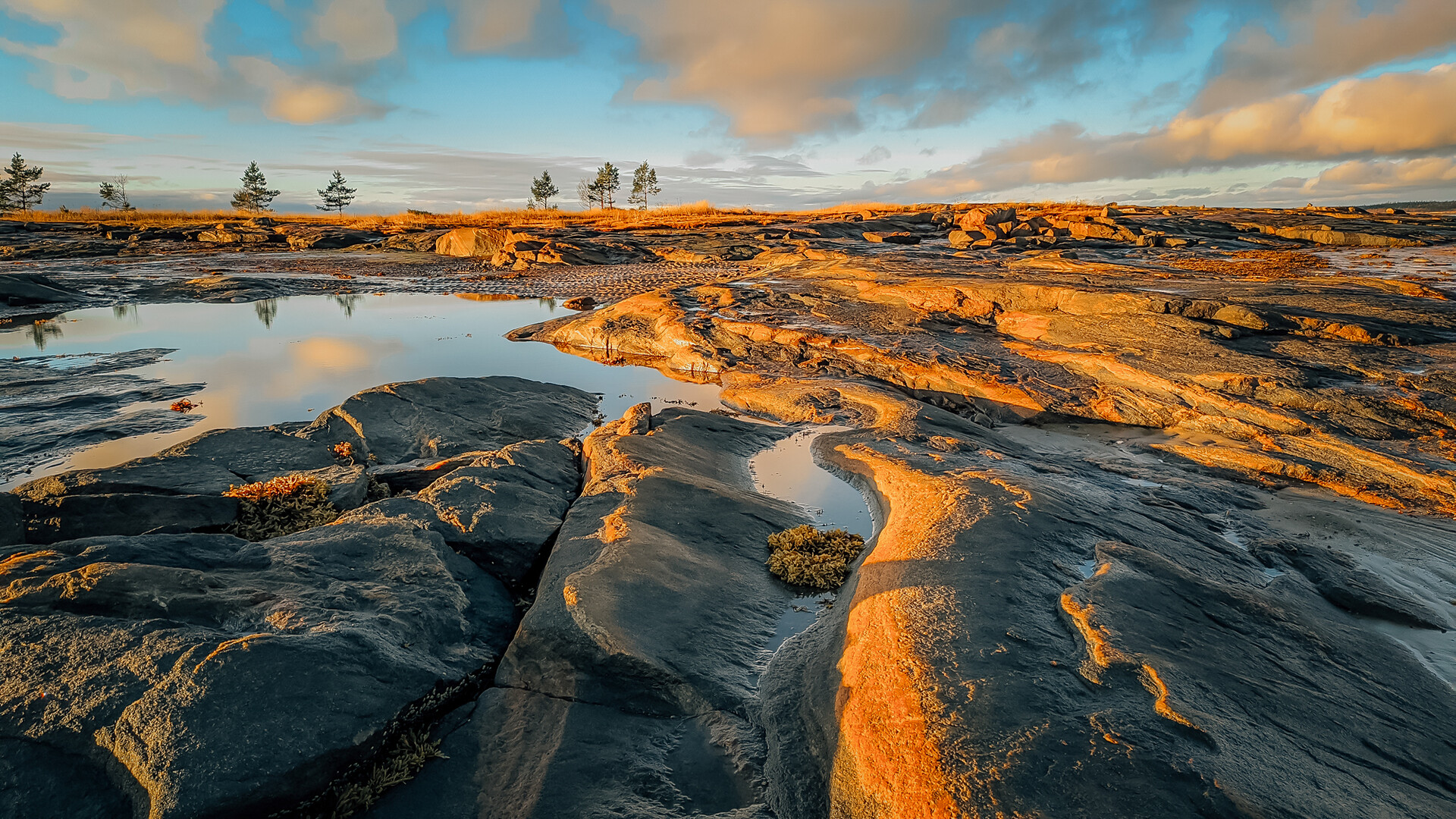 On the White Sea coast.

Nowadays, the fishermen of the collective farm hardly ever go to the sea by boat. In winter, it freezes, so they get to the traps set for saffron cod (net-traps on rings) on snowmobiles. In spring, when the herring and smelt come, they also catch them at high tide by setting up nets and rods. Only during the summer, fishermen have to go far out to sea, to the islands, in their small boats, to mow seaweed (used to make fertilizers and food additives). It is quite scary to be on a small boat in the middle of the harsh White Sea and the Pomors have been following specific rules of behavior out in the waters for generations. 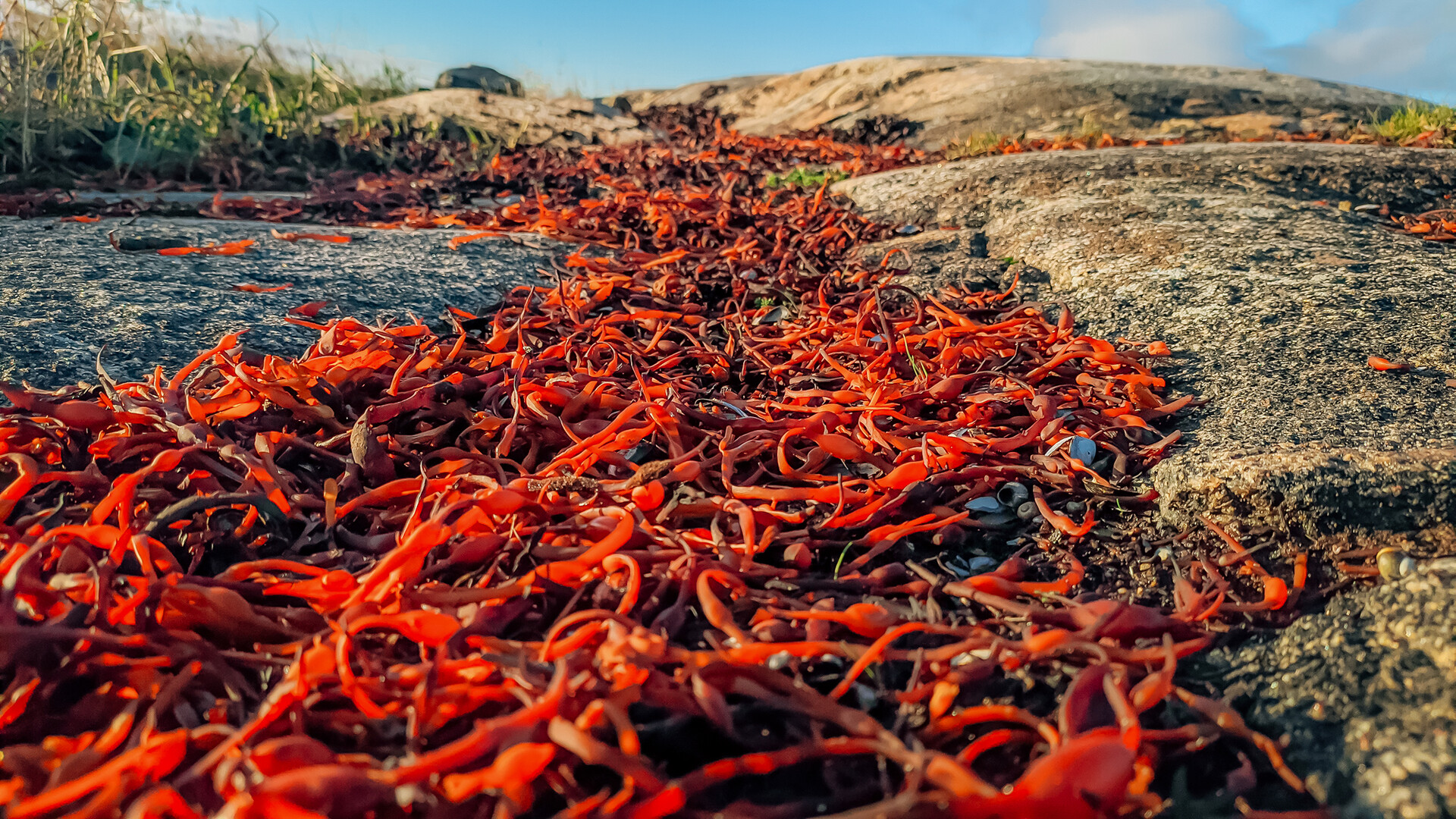 The Fucus algae on the White Sea.

“You can’t whistle while sailing - there will be a storm. If you whistle, the wind will definitely start blowing and a big wave will come up,” says young fisherman Pavel. “Also, you can’t throw garbage into the sea.” 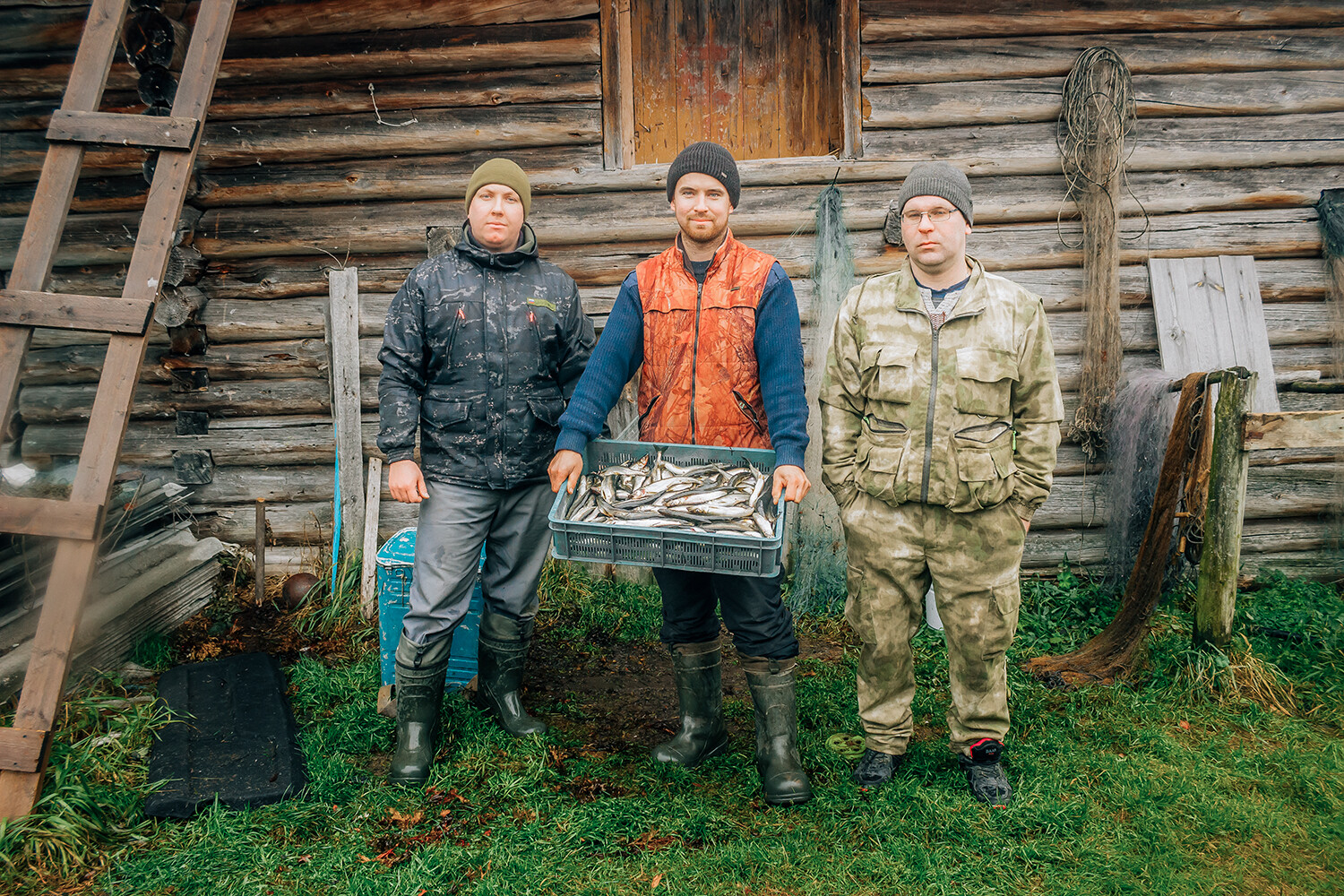 “You can’t swear out in the sea or drink vodka if you want to get home,” Vladimir adds.

What does Kolezhma feed off?

The village of Kolezhma has been known since 1548. In the old days, saltworks and an armory of the Solovetsky monastery were located there. But, the main pastime of the locals has always been fishing. Powers have lived there for centuries: hereditary fishermen, shipbuilders and sailors (you can read more about them here). 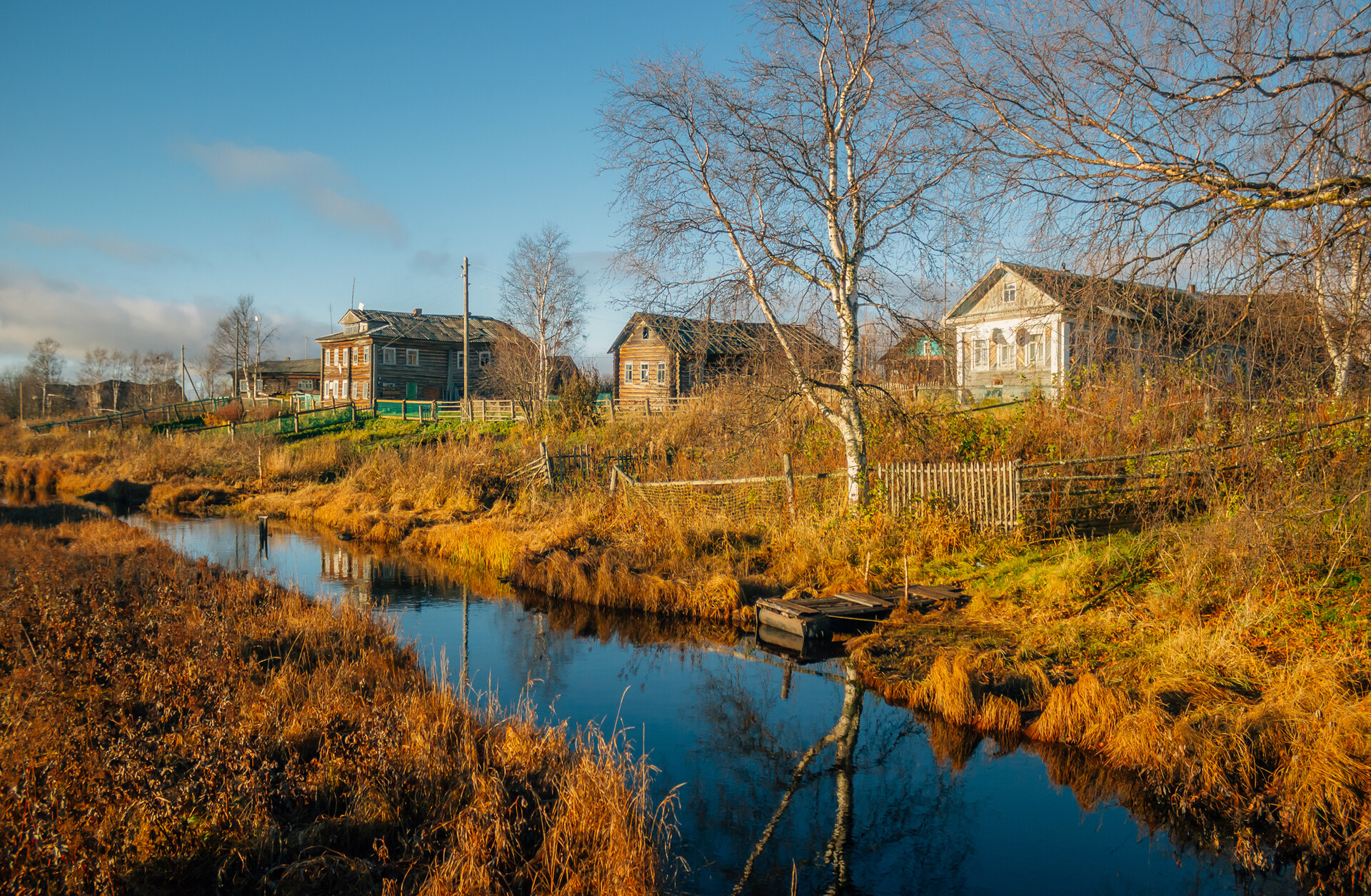 There were dozens of such settlements on the shore of the White sea in the past, but, today, only a few of them are left. This is one of the last settlements where the traditional Pomor way of life and fishery was preserved. 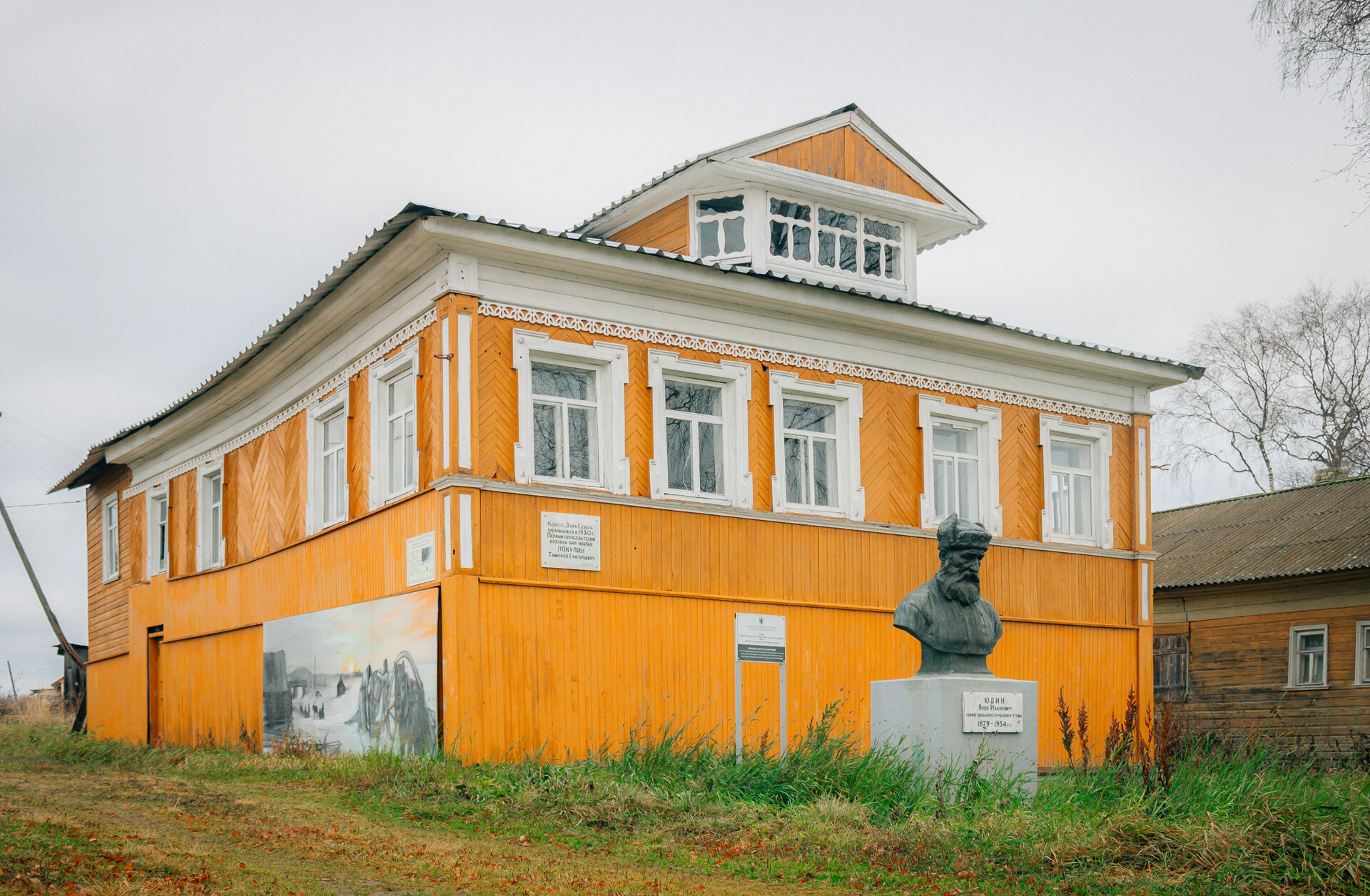 Most of the Pomor villages are in decline today, people come there only for summer vacations. There are no jobs and living conditions are hard, so everyone ends up moving to the cities. In contrast, Kolezhma stands out for its vitality. Most of the locals work at the collective farm, founded back in 1930. “Our kolkhoz delivers 100-110 tons of saffron cod in one winter season, this is half of all fish in the district,” says the chairman of the farm. Such high figures are explained by the good location of the village, as the fish like the shallow waters nearby. 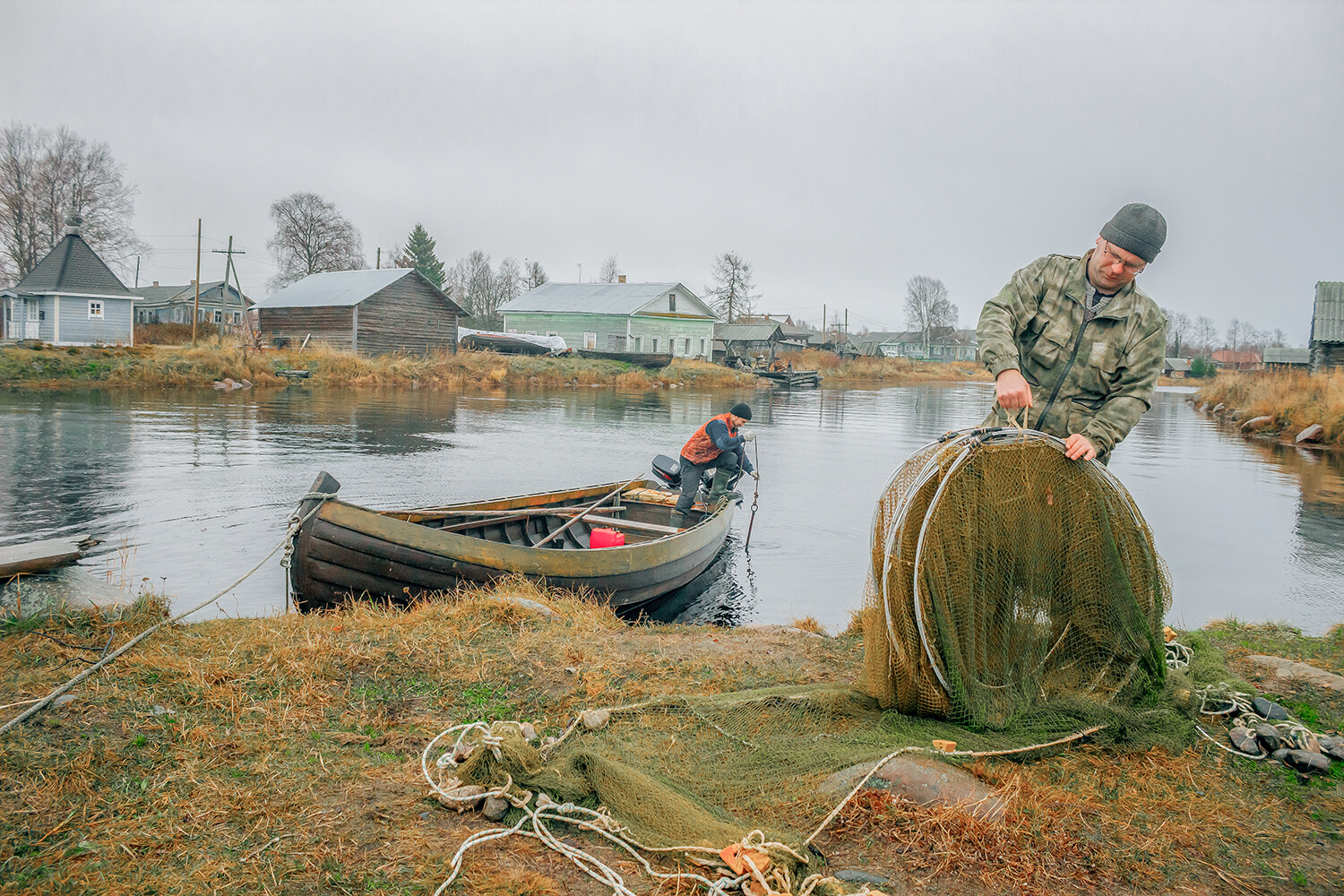 “One meryozha is set up during the high tide, the other one during the low tide. The water in the sea comes and goes and the fish get caught in the nets,” says Kochin. The ancestors of today’s Kolezhma locals were practicing the exact same winter fishing a few centuries ago, but they had to ride horses, not snowmobiles. 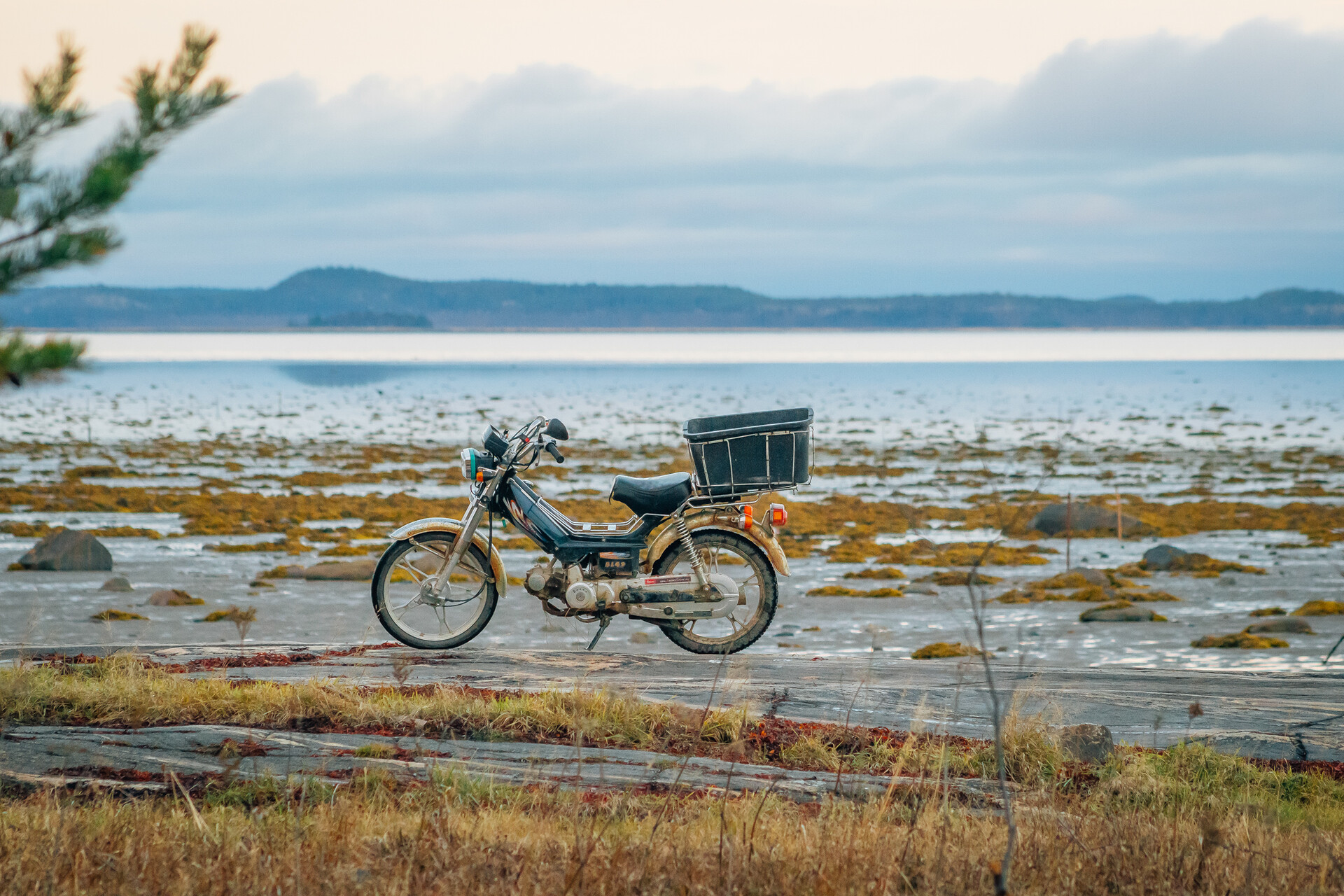 On the White Sea coast.

This is what fishing using meryozha looks like in winter.

It’s fall, the fishing crews are getting ready for the season by inspecting the meryozhas. If there are any holes, they need to be patched up. The stones and weights are also checked. They go out to set up the meryozhas strictly on a Saturday. It’s an old tradition, because Saturday is considered a “blessed day”. If you go out any other day - you won’t catch any fish, the locals say. 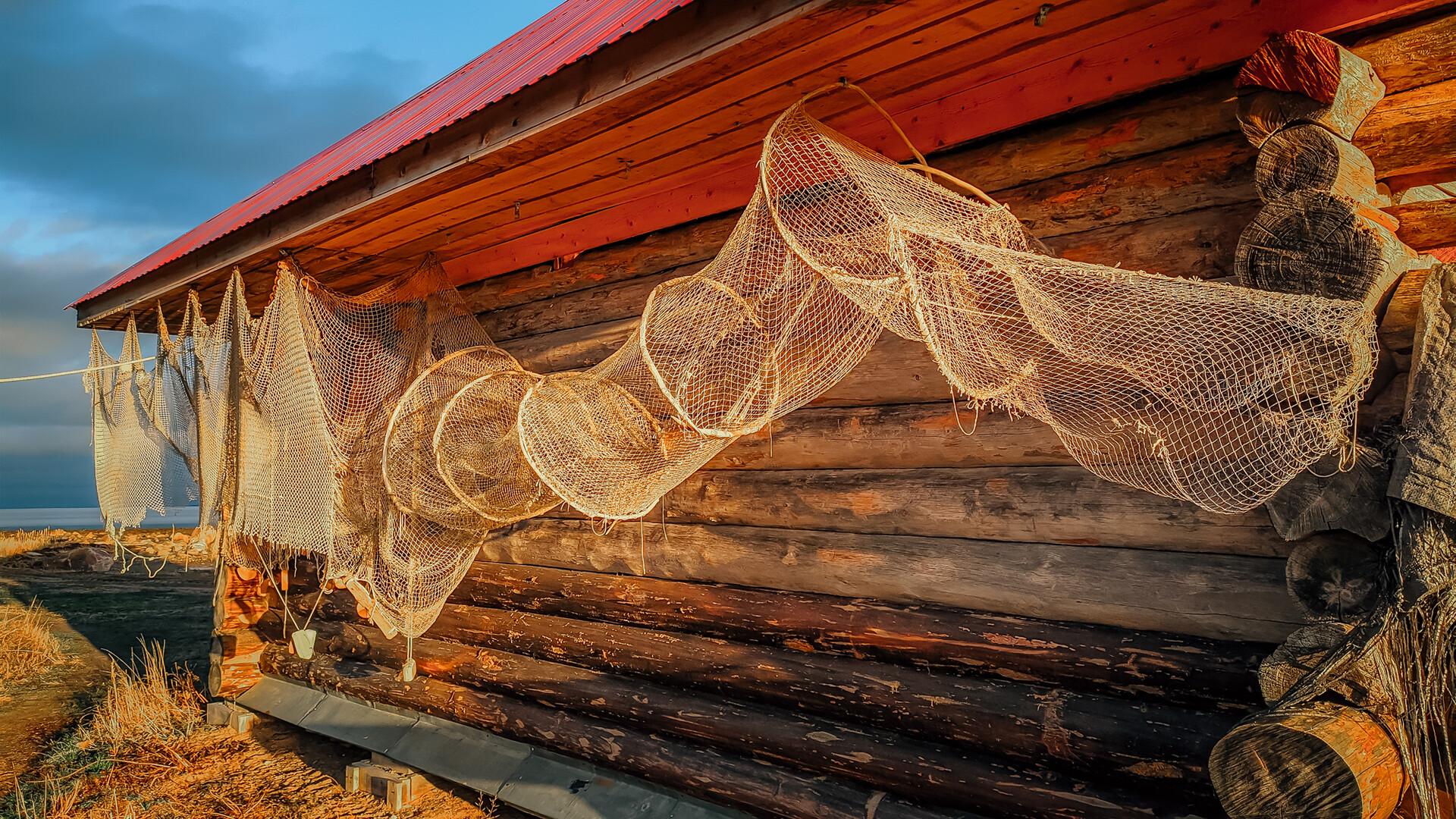 Boats are also made there

When you walk through the village, all the houses look like they’re from a picture, as if you’re visiting a museum of northern architecture. Of course, there are also abandoned ones, but even they are wooden, monumental, two-storey and with a “loggia” - a light-glassed porch. 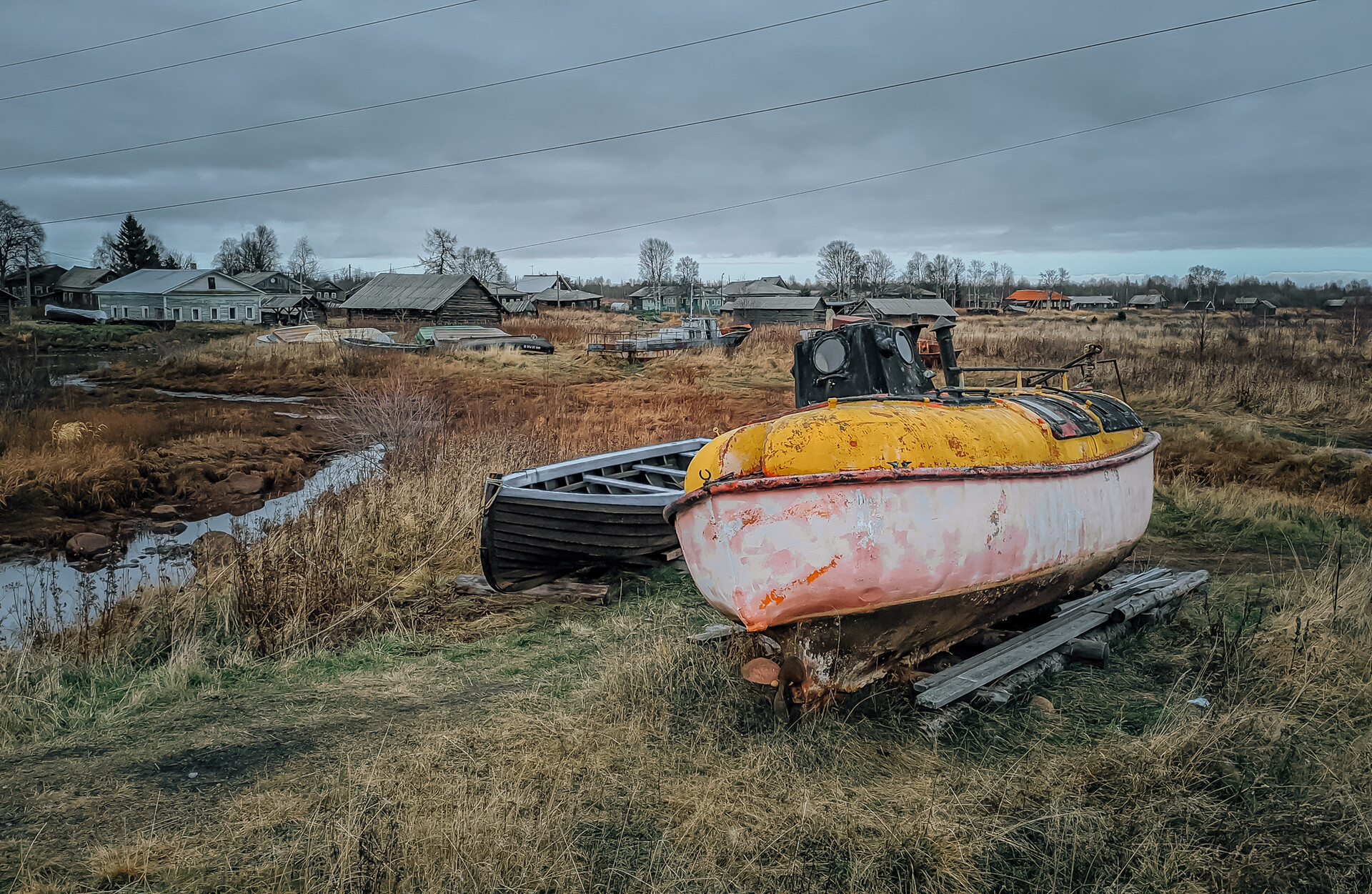 Many have a karbass (a traditional Pomor boat), standing next to them. “During the Soviet times, everyone had a wooden boat, plus a big one for the crew, but, in the 1990s, there were no craftsmen,” says Sergey Lyogky, a “hereditary Pomor boat-maker,” as the chairman introduces him. 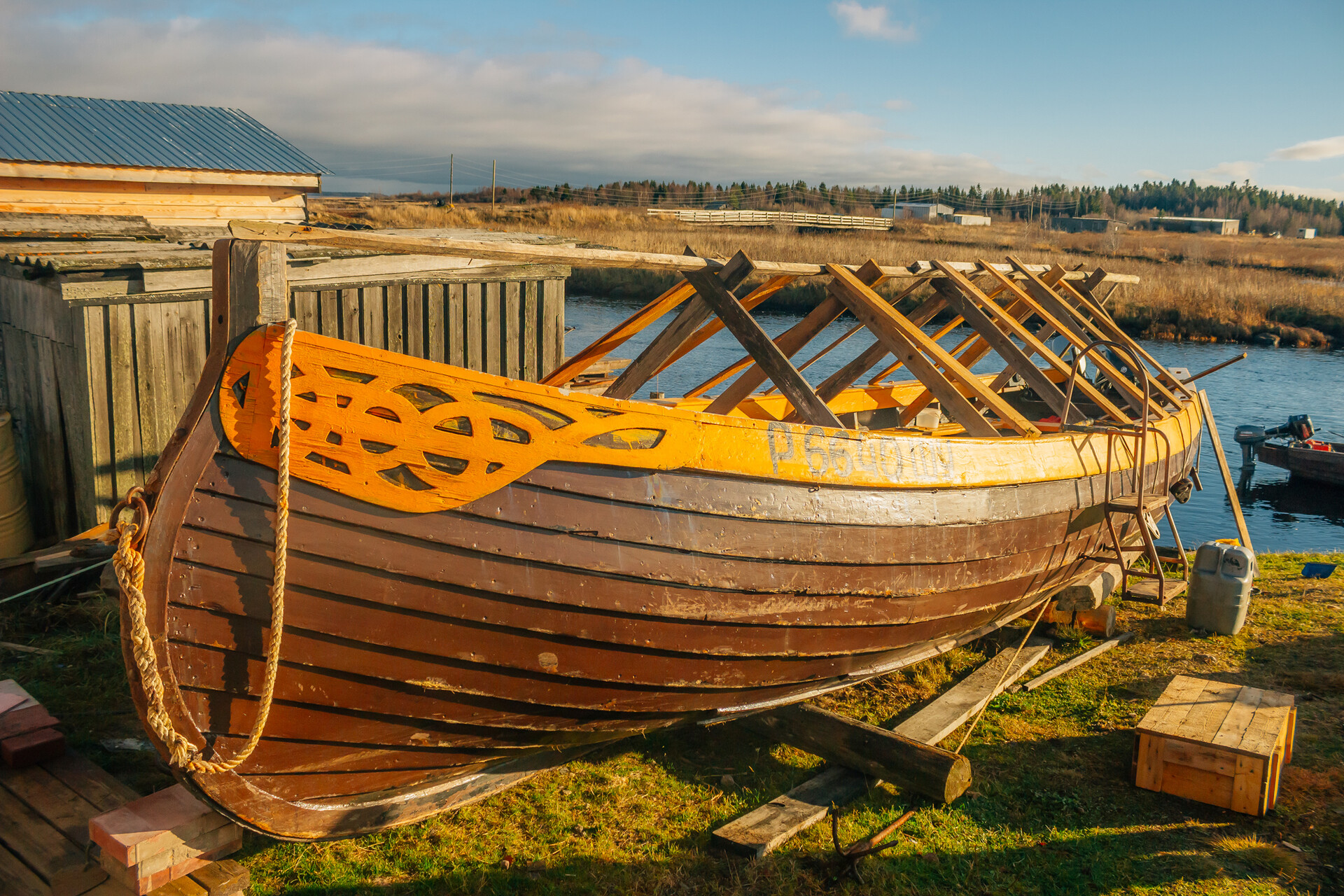 Almost through his entire adult life, Sergey worked in Petrozavodsk at a shipbuilding plant and after the collapse of the Soviet Union he and his brother Vasily decided to revive the sewing of karbasses in Kolezhma. “The boat turned out almost by itself,” he recalls. 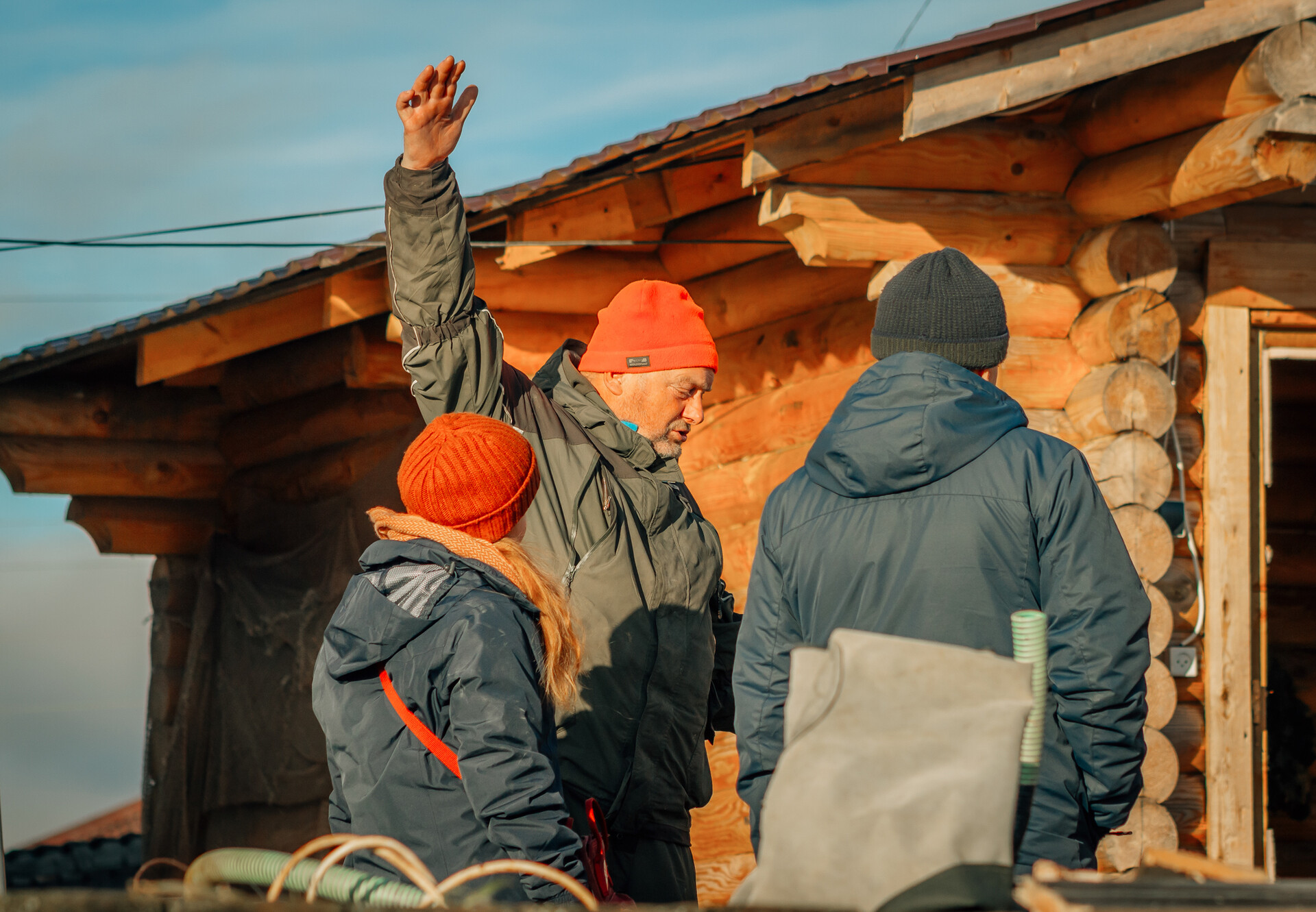 It is hard to count how many boats they have made over the years. The collective farm now uses plastic ones, which are made in Petrozavodsk, because they are cheaper and less demanding to maintain than wooden ones. However, the Lyogky brothers’ boats are known all over Russia nowadays. Most often, they are ordered for tourist sailing trips. If you have ever sailed in such a boat, then it was most likely made by Pomor craftsmen. 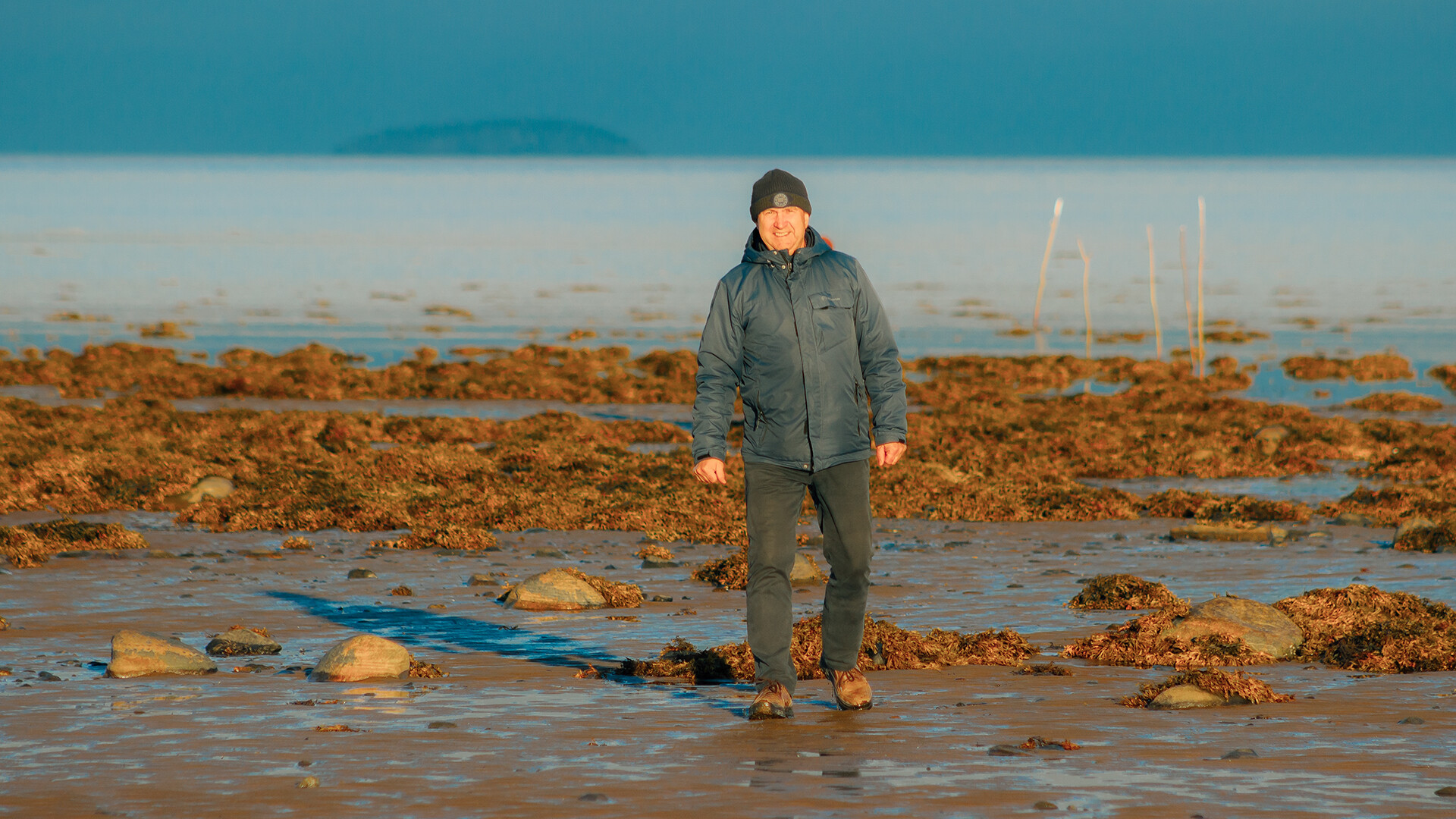 Ivan Egorov, the chairman of the kolkhoz.

Many of Kolezhma’s residents left during the 1990s, but came back later, because life here began to improve.

One hundred and thirty people are registered as inhabitants of the village today. But no more than half of them stay for the winter. Many people leave for the cities, although salaries in the collective farm are higher than in the nearby city of Belomorsk. 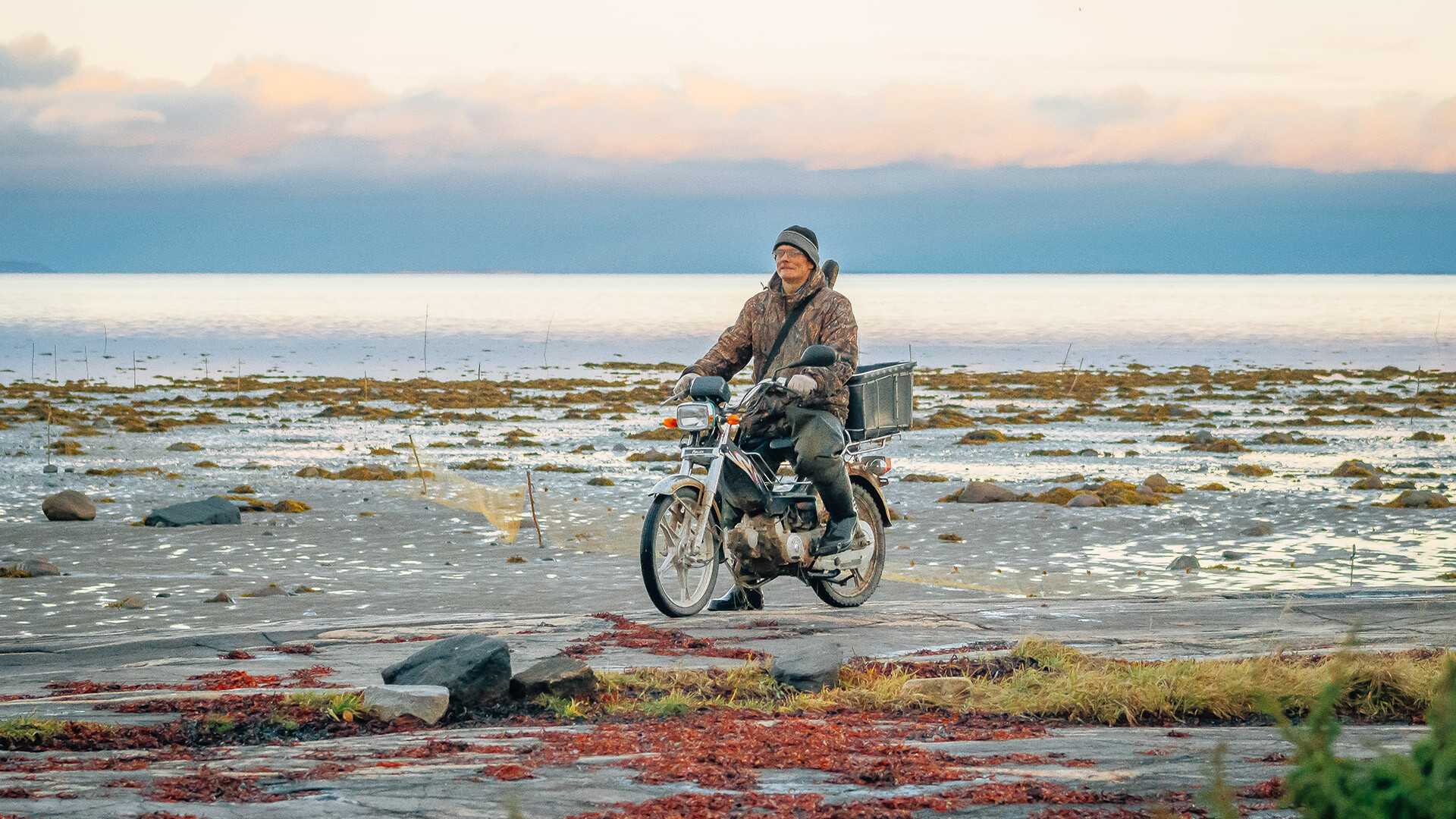 Alexander on the White Sea coast.

The main problem is the lack of necessary infrastructure: it is difficult for families with children. “There is no school, no kindergarten, only a boarding school in Sumsky Posad,” says fisherman Alexander. He himself has been working at the collective farm for 12 years, but is still single. 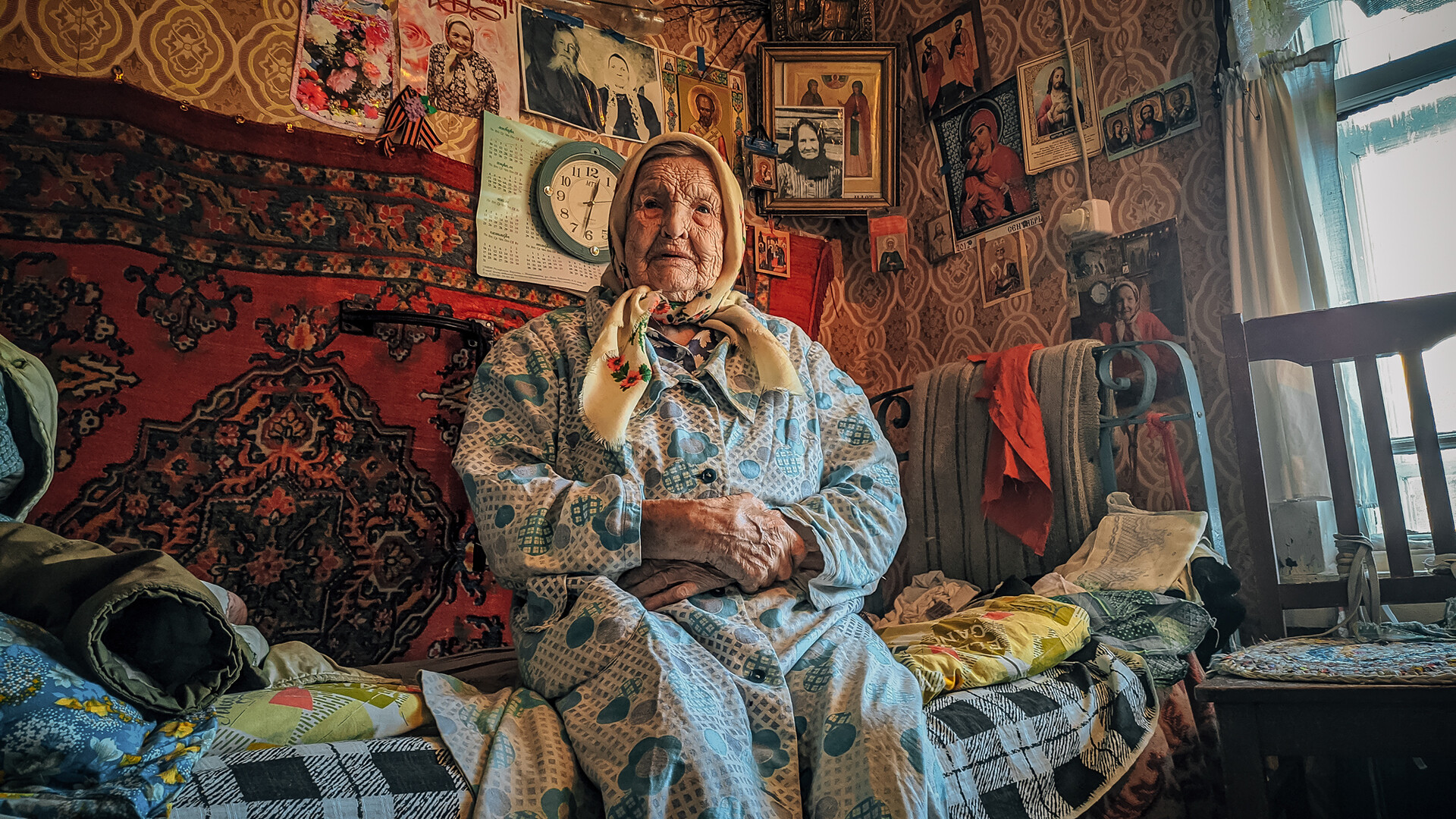 This resident of Kolezhma has never left and has literally become a local “landmark”, of sorts. Augusta Mikhailovna, a.k.a. ‘Baba Gusya’, as her neighbors affectionately call her, is the oldest resident of the village. She was born in 1928 and dedicated almost all of her life to the collective farm. She worked at the post office, in the nursery, on the farm and even on a ship in the Barents Sea as a cook. “There were a lot of scary situations. In Teriberka, I don’t know which way we were going, but the fog spread far out to sea and the motor broke down. I went out on deck to have a look and saw how the captain, Ivan Vasilievich, could hardly keep the ship floating. Luckily, a passenger steamer was passing by and heard our emergency signals, hooked us up with a rope and rescued us.” 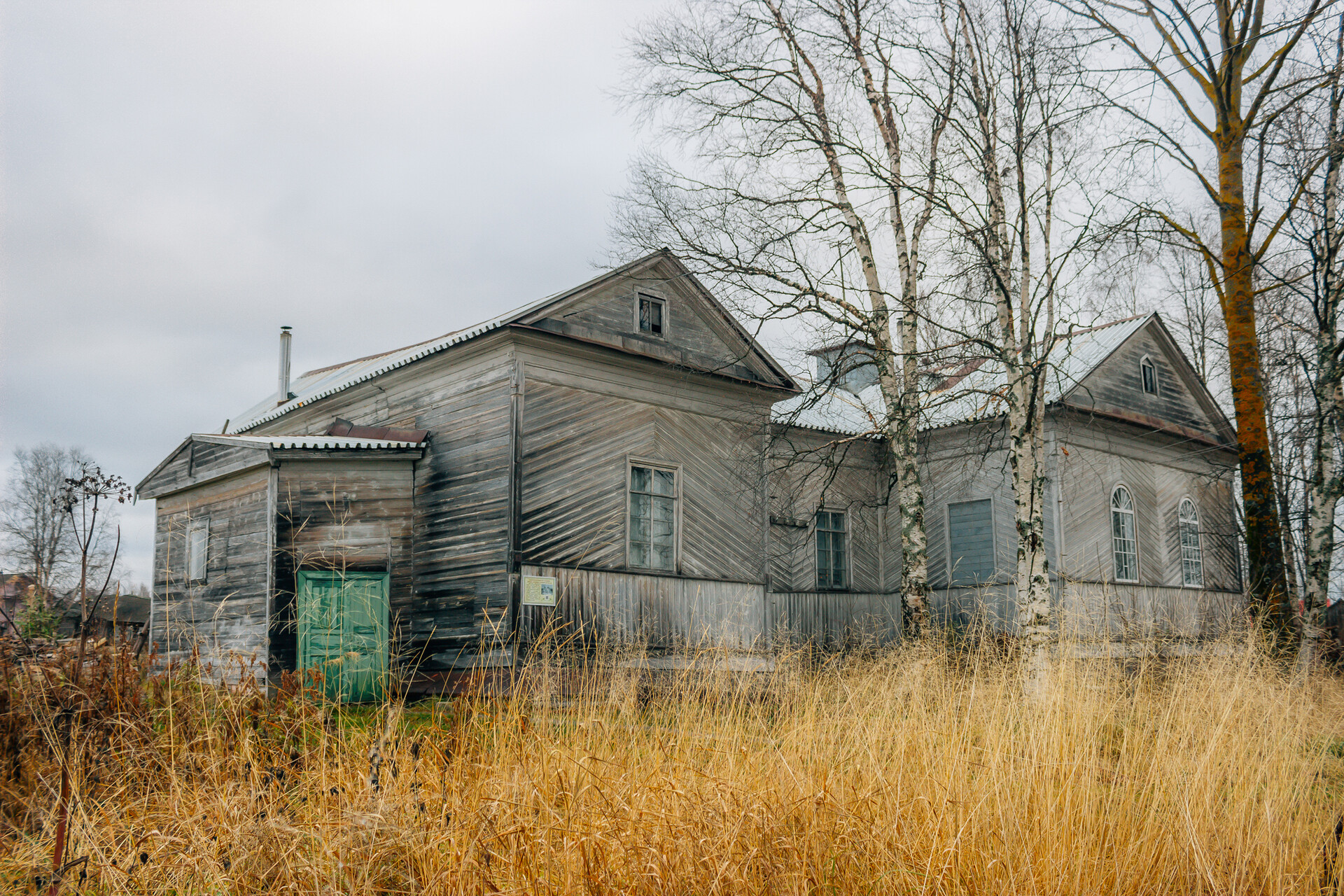 This is the former old church, that now is the local 'house of culture'.

Baba Gusya clearly remembers going to the old church as a child, even before it became a house of culture. She also remembers the Great Patriotic War, when children were evacuated to Kolezhma, far away from the front line. She also remembers both fathers and grandfathers of the present-day fishermen - she used to work with many of them.

The Pomors say that their "ears curl up" if they don't eat fish. In our next story, we'll discuss the traditional and modern gastronomy of these White Sea dwellers. Follow us on social media in order not to miss it!