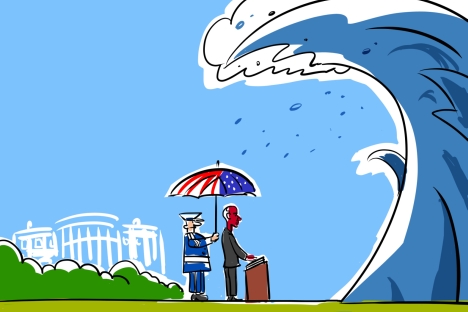 At the start of Barack Obama’s second term, US-Russian relations are hard to fathom. Although tensions are running high, Washington and Moscow hope for the second round of "reset"

Barack Obama is back in the White House. A second term tends to be a time when heads of state think about the legacy of their period in office, and President Obama is no exception — one hundred years down the line, he does not just want to be remembered as the America’s first black president.  Inside America it seems public opinion is polarized like never before: contradiction between the parties has become especially marked and is interfering with the smooth functioning of the state machine.

Obama will have to fight Congress down to the last dime when it comes to financial or budgetary issues, mainly due to the unprecedented levels of state debt. The American president also faces an on-going struggle to defend and maintain one of his foremost concerns to date — the American healthcare reform act. The general consensus is that Obama’s place in history depends on whether he can lead the country back toward economic growth.

As for U.S. foreign policy, it seems Obama fully intends to base it on his own comprehension of the international system. Just like any American president, Obama assumes the America’s global leadership as an axiom; but he understands that the situation has changed.

The current U.S. President does not support outright hegemony, and neither is he a fan of aggressive intervention policies. Obama prefers diplomacy, and is keen on multilateral organizations, which can help America to share part of its burden and responsibility when it comes to solving global crises. Obama also seems to like signing agreements with countries other than U.S. allies.

However, Obama’s first term has shown that understanding the situation does not necessarily mean knowing how to act. Since the end of the 2000s, America’s foreign policy has become more and more reactionary. The Obama administration tends to act in response to stimuli, as opposed to proposing strategic plans.

These days, an all-encompassing plan seems inappropriate for solving international problems, because the global situation has become so unpredictable and complex. Still, the American leadership cannot admit this, as this would be the same as admitting that America is not a leading world superpower but a normal country. It may still be the strongest one out there, but, in the face of these volatile and unpredictable processes, it is just as helpless as all the others.

The latest election campaign — and especially the Republicans’ primary elections — has shown that there is growing support within the U.S. for a less ambitious foreign policy. However, at the moment, this stance is still as peripheral as before.  Thus, Obama’s attempts to “be more focused” when it comes to wielding America’s international influence inevitably meet with disagreement and accusations of weakness.

At the start of Barack Obama’s second term, U.S.-Russian relations are hard to fathom. Russia is not high on the country’s list of priorities, but it is important to the president personally, because Obama is hoping Moscow will assist America in solving some of its most pressing issues.

Neither the White House nor the Kremlin wanted an open conflict, but, toward the end of 2012, tension flared up of its own accord.

This was all concerning the Magnitsky Law and Russia’s response to it. The atmosphere is tense, but there are no objective reasons for this. Nothing has happened recently that would explain this bad feeling or shed light on these new fundamental contradictions (the above-mentioned clash of interests was played out more on an emotional and virtual plane than a geopolitical one).

There is no indication that this bad feeling will be exacerbated.

The December tensions will cool down again, though they will leave an unpleasant aftertaste. Nevertheless, the situation will not develop into anything more serious. Russia and America have no agendas to match the tasks of today and of tomorrow. Washington is hoping, in essence, for “Reset 2” — a continuation of the dialogue on subjects that achieved relative success in 2009-2010. In addition, it is primarily hoping for further nuclear reduction.

But these hopes are likely to be in vain, because Russia is not open to new agreements in this area: the country is quite happy with the situation as it is. This is the state of affairs, as it were, back at square one — and it is still unclear as to how to find a way out. Negotiations on strategic stability remain pivotal to the whole relationship: no other subject can detract, or distract, from the importance of this one.

The events that took place in the 2000s shows that, when one of the sides (in this case the Bush administration) loses interest in nuclear reduction, there is a potentially dangerous disintegration in bilateral relations. Everyone is sick and tired of counting and comparing warheads, but a good alternative has yet to be proposed.

Fedor Lukyanov is the editor-in-chief of Russia in Global Affairs magazine and chairman of the Council of Foreign and Military Policy. The opinion is abridged and first published in Russian in Rossiyskaya Gazeta.