A modern twist on a Russian classic: How to make shellfish Stroganoff 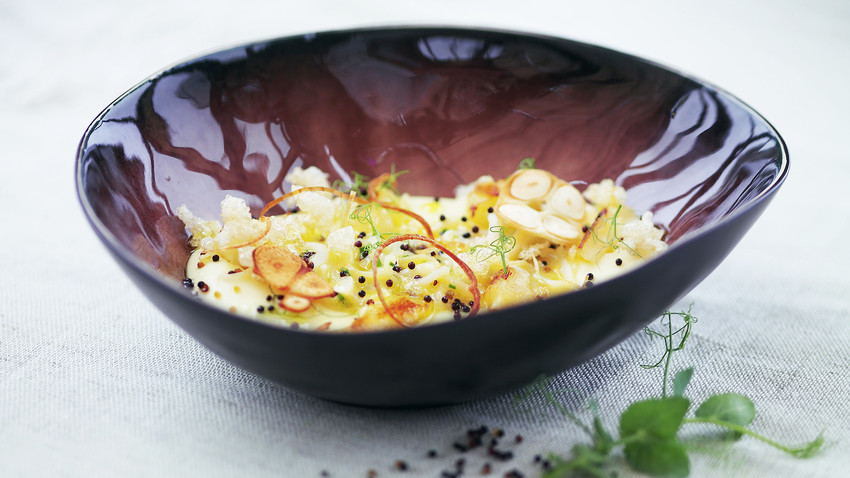 White Rabbit
So, you think Stroganoff is just an ordinary dish that can be made by anyone? In a way, you might be right – but then again, you probably haven’t heard of Stroganoff without beef, have you? Nope? Then it’s time to try this delicious recipe!

Beef Stroganoff is a very popular Russian dish, which, true enough, doesn’t have the most humble of origins. First created in the 19th century - it originally consisted of finely chopped beef strips covered in sour cream - and received the most noble of titles in honor of Count Alexander Stroganov: Boeuf Stroganoff. Among other achievements, the count had taken part in the capture of Paris of 1812. He took a liking to the French capital and later moved there to study anatomical science from 1841 to 1842.

According to one account, the dish was invented by Count Andre Dupont’s French chef. Apparently he had trouble chewing large pieces of beef, so it was perfect for him. Our recipe with shellfish would have been ideal for his weak jaw!

Another no less plausible account claims the dish was designed for Stroganov’s “open” tables (a kind of restaurant) in Odessa. The dish combined the French technique of roasting the meat and serving it with sauce with the Russian culinary tradition of serving the sauce as gravy, rather than as a side. In addition, the finely chopped beef was easily divided into separate portions, and therefore often cooked like this in restaurants.

The exact recipe has not been preserved, so it’s constantly being reinvented with new ingredients. We suggest you try this unusual Stroganoff recipe with shellfish from chef Vladimir Mukhin (from Moscow’s White Rabbit restaurant), who inherited the cooking gene from his father.

Mukhin makes modern Russian cuisine without the Soviet touch, and his reputation is soaring.  Russia Beyond brings you his special recipe for shellfish Stroganoff with mashed potatoes.

Ingredients for the beef and anchovy broth:

To make the broth:

Fry the shallots, garlic, thyme, and lemongrass in the olive oil. Pour in the wine and allow half of the liquid to evaporate - then pour in the stock. Boil for 15 minutes on a low heat. Having crushed the anchovies, add them to the pan, stir, and simmer for 15 minutes.

Brown the shallots and garlic, pour in the broth, and then slowly add the butter. Add the sour cream, season with salt, and remove from the heat. Put the chopped mollusks and finely sliced chives into the warm broth. Mix well.

Place the Stroganoff on a bed of mashed potatoes. Garnish with the rapeseed and pork scratchings, and place the baked parsnips around the edges. Decorate with the garden cress and a drizzle of olive oil. Enjoy!