Russian Kitchen
Victoria Drey
Imagine you’re celebrating Christmas in Old Orthodox Russia – what would you see served on the table? Loads of poultry dishes, scrumptious meats and delicious sides that would blow your mind.

Russian Christmas has always been closely connected to Advent and its preceding time of fasting. The last day of the fast is Jan. 6 (Dec. 24 in the old calendar), until the moment when the first star appeared on Jan. 7 (Dec. 25 in the old calendar). So, during the night the eastern Slavs laid out the prized dishes on the table. Each family had their own specialties, but some items were a basic staple in every house during the Christmas feast. 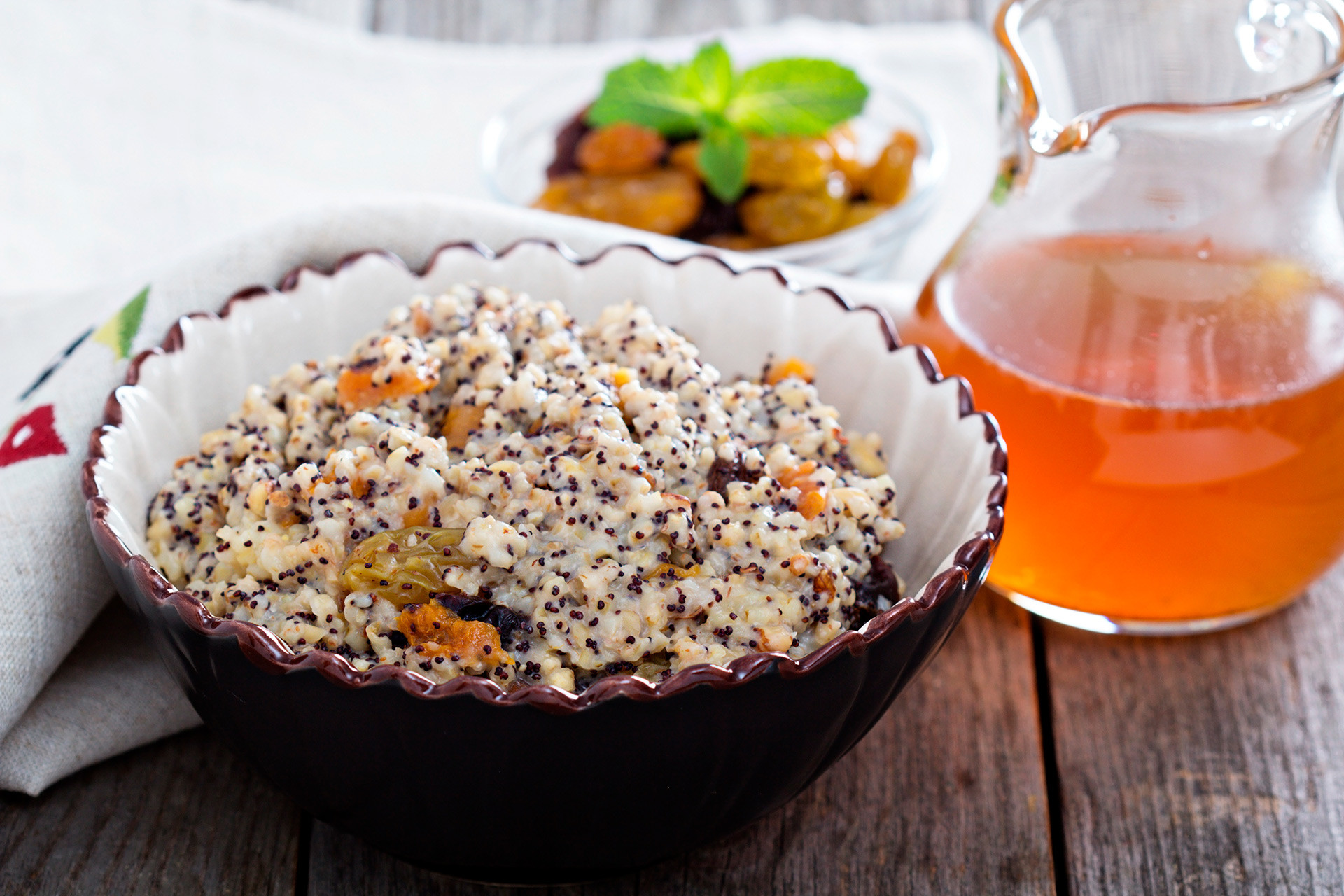 “Kutia,” or “koliva,” was the major festive dish. A ritual food made of boiled wheat and honey, you can also add nuts, raisins and poppy seeds. The point of this porridge is that its main ingredients have meaning for Orthodox culture. Wheat symbolizes resurrection from the dead and honey means eternity. Some religious people still make kutia for Christmas Еve, but usually use barley and sugar instead of honey. 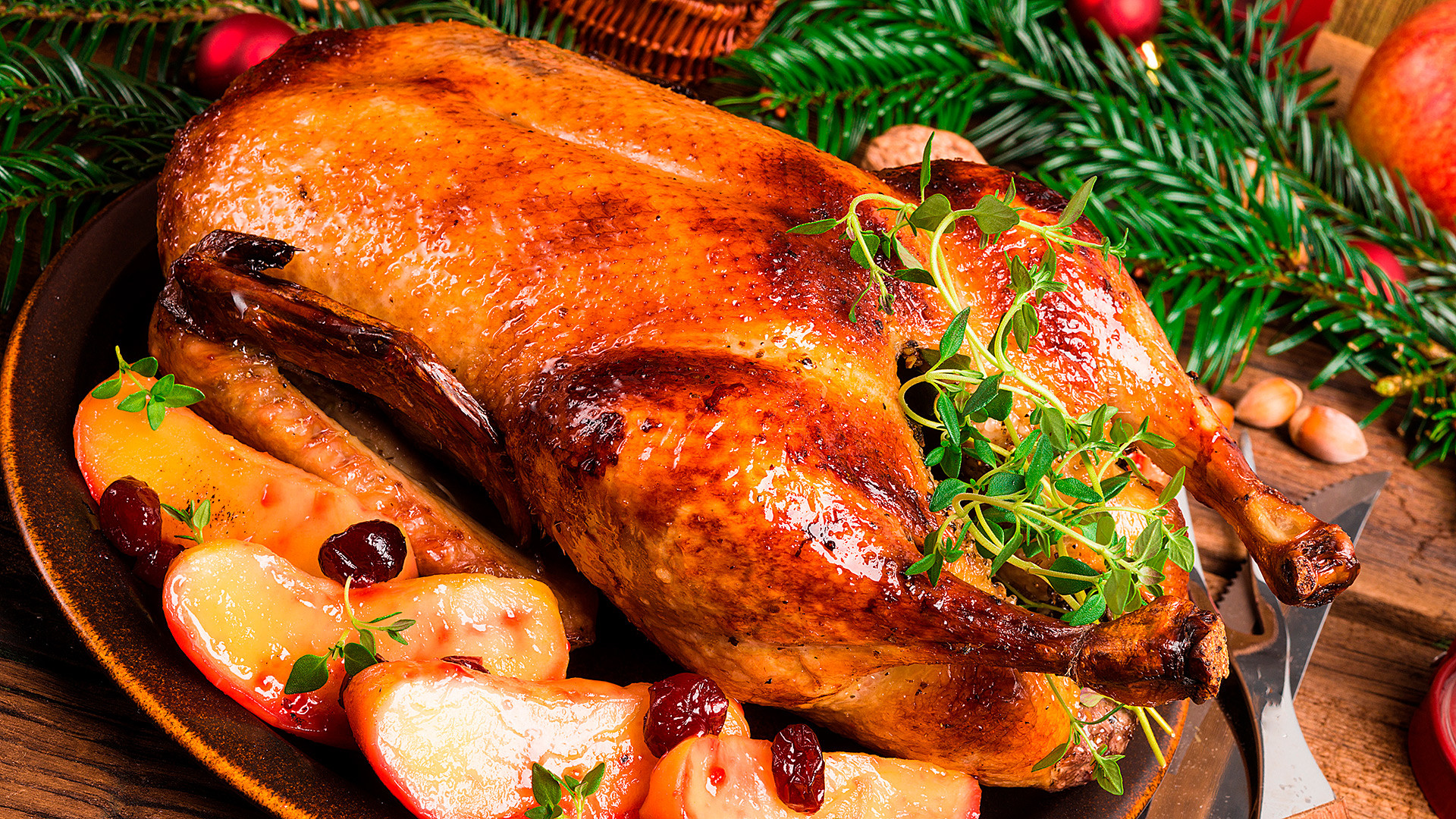 Roast goose was the tsar of the Christmas feast. Since Advent did not allow eating any meats or poultry, Orthodox Christians passionately prepared many meat dishes for breaking the fast. As Christmas Eve approached, more and more carts loaded with meats and poultry appeared on city and village streets. While geese, duck and turkey were quite expensive, for Christmas they were delivered to different regions.

The proper festive roast goose had a crispy and golden crust and was stuffed with different fillings, usually with a sweet and sour type of apple or sauerkraut. 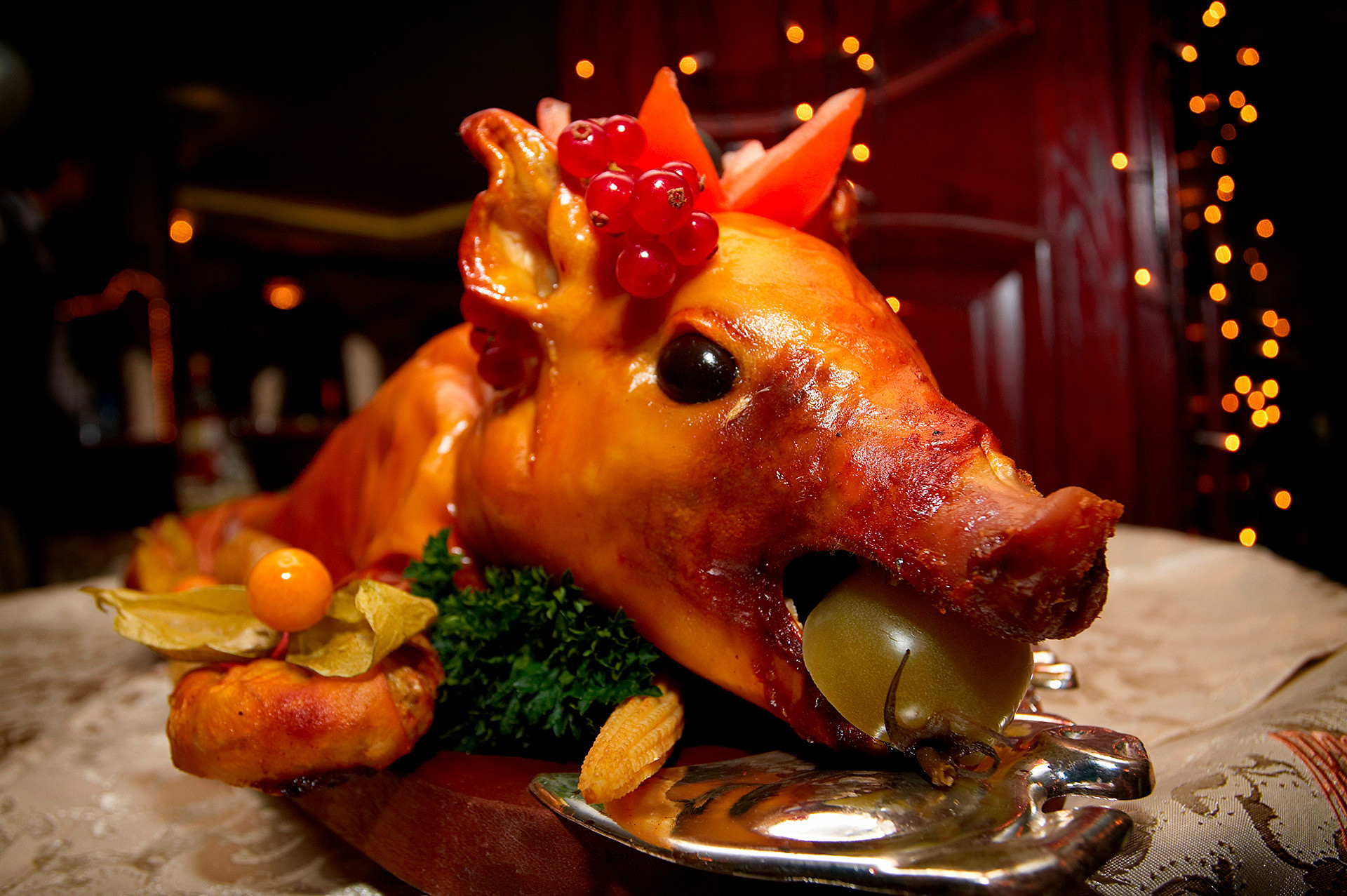 As for showstopping Christmas dishes, the only one that could compete with roast goose was a suckling pig, or “milky pig,” as Russians call it. Such a complex and striking dish could only be afforded by wealthy families because it requires a young pig of a very specific age between two and six months old. The roast piglet, handsomely served with porridge and vegetables, was a major symbol of the first repast after the fast was over. 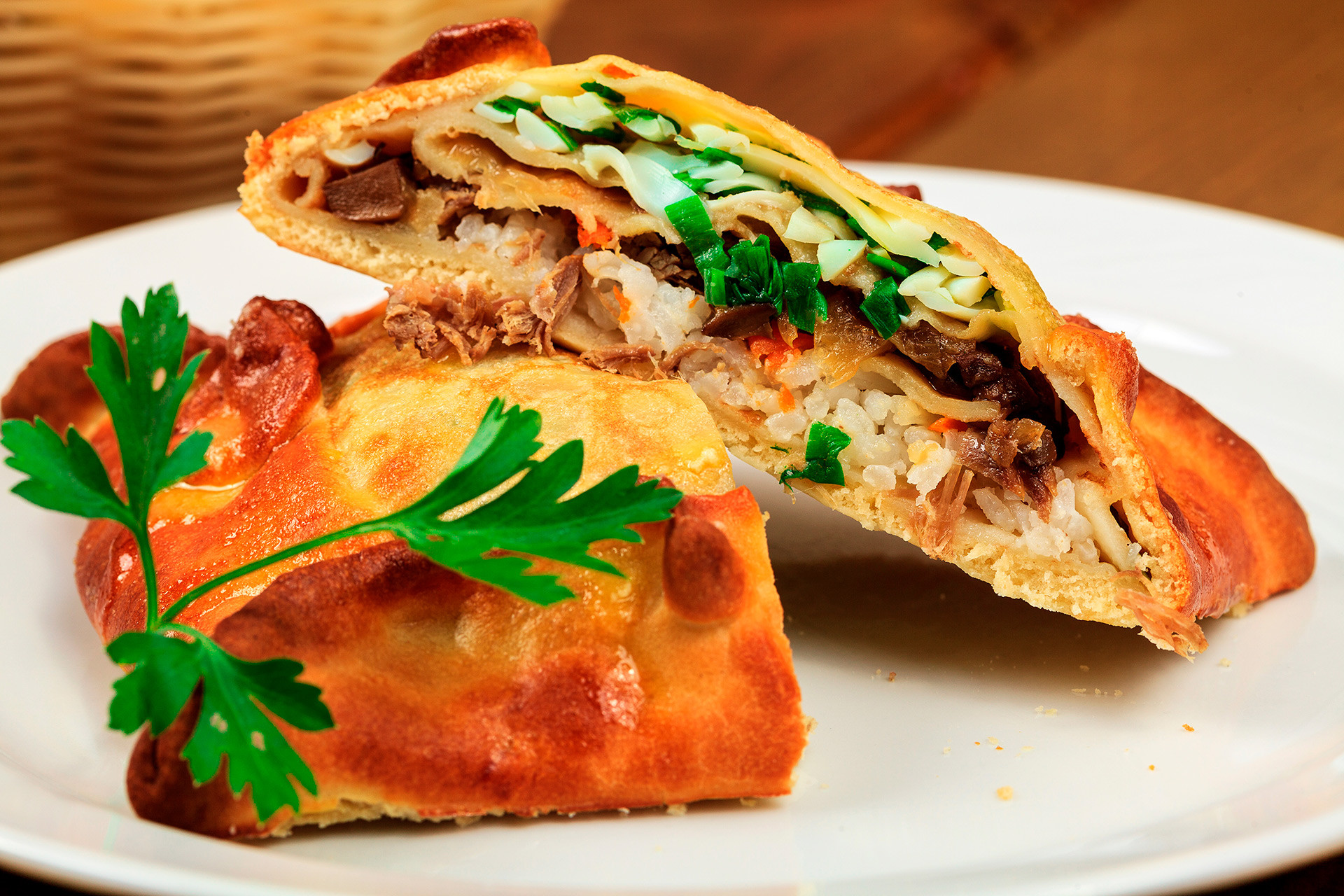 This grand type of Russian pie was a hit at any feast, and Christmas was no exception. What differs  coulibiac from other pies and makes this pastry so special is that it features several layers of different fillings. One coulibiac can contain several kinds of meat, red and white fish, rice, mushrooms, eggs, vegetables and even different types of dough; basically, it’s a full-course meal in a single piece of pie! Every woman tried her best to amaze family and friends, and came up with her own festive filling for coulibiac. 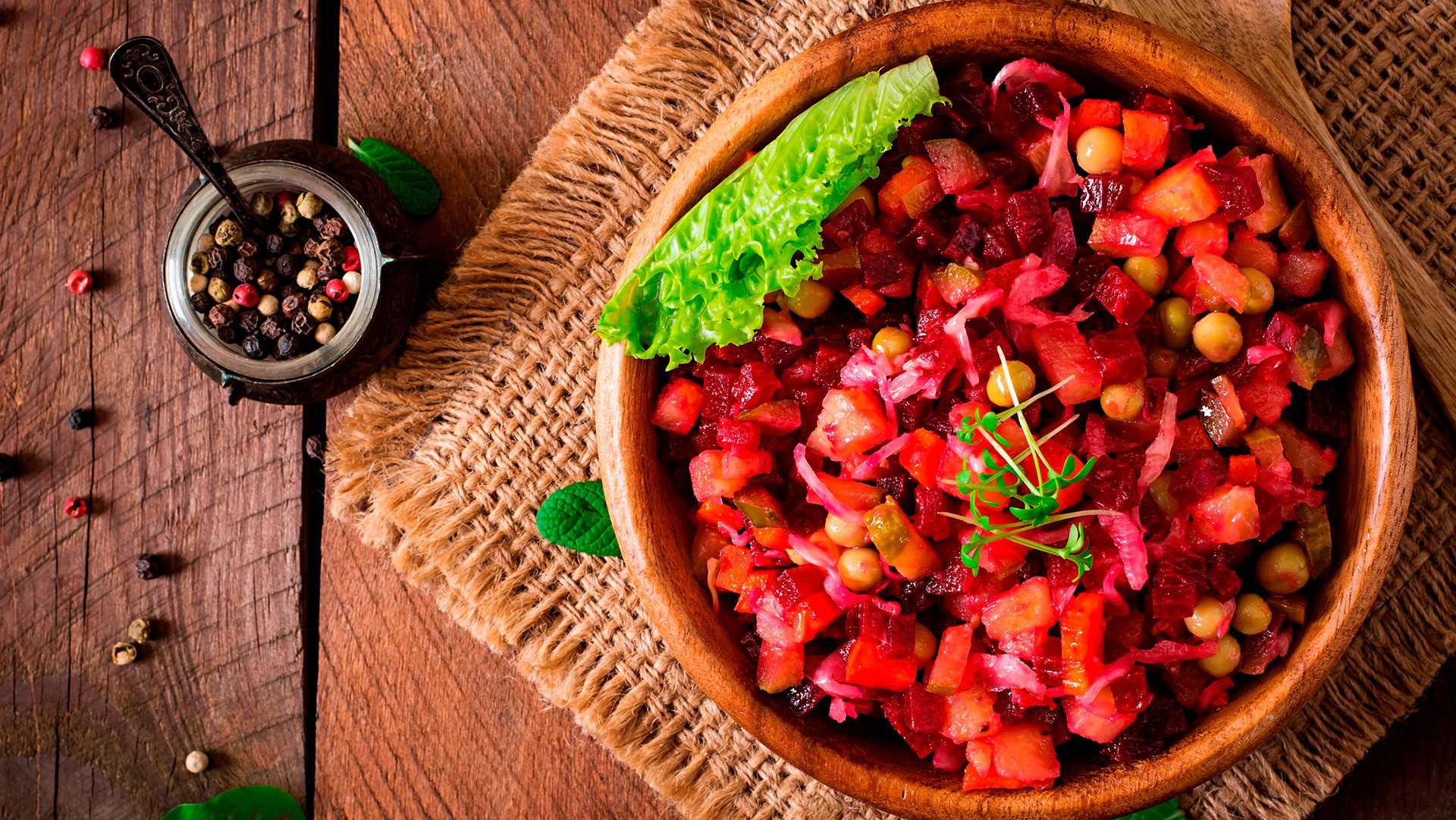 This traditional salad with beetroot, potato, carrot and pickles dressed with vinegar and oil was and still is one of the favorite dishes on the Christmas table. Those who couldn’t afford lots of dishes at the feast added herring to vinaigrette, or made a version that’s easy and inexpensive as far as ingredients. In wealthy households vinaigrette was often enriched with exquisite fish such as sturgeon, which brought the taste to the next level. 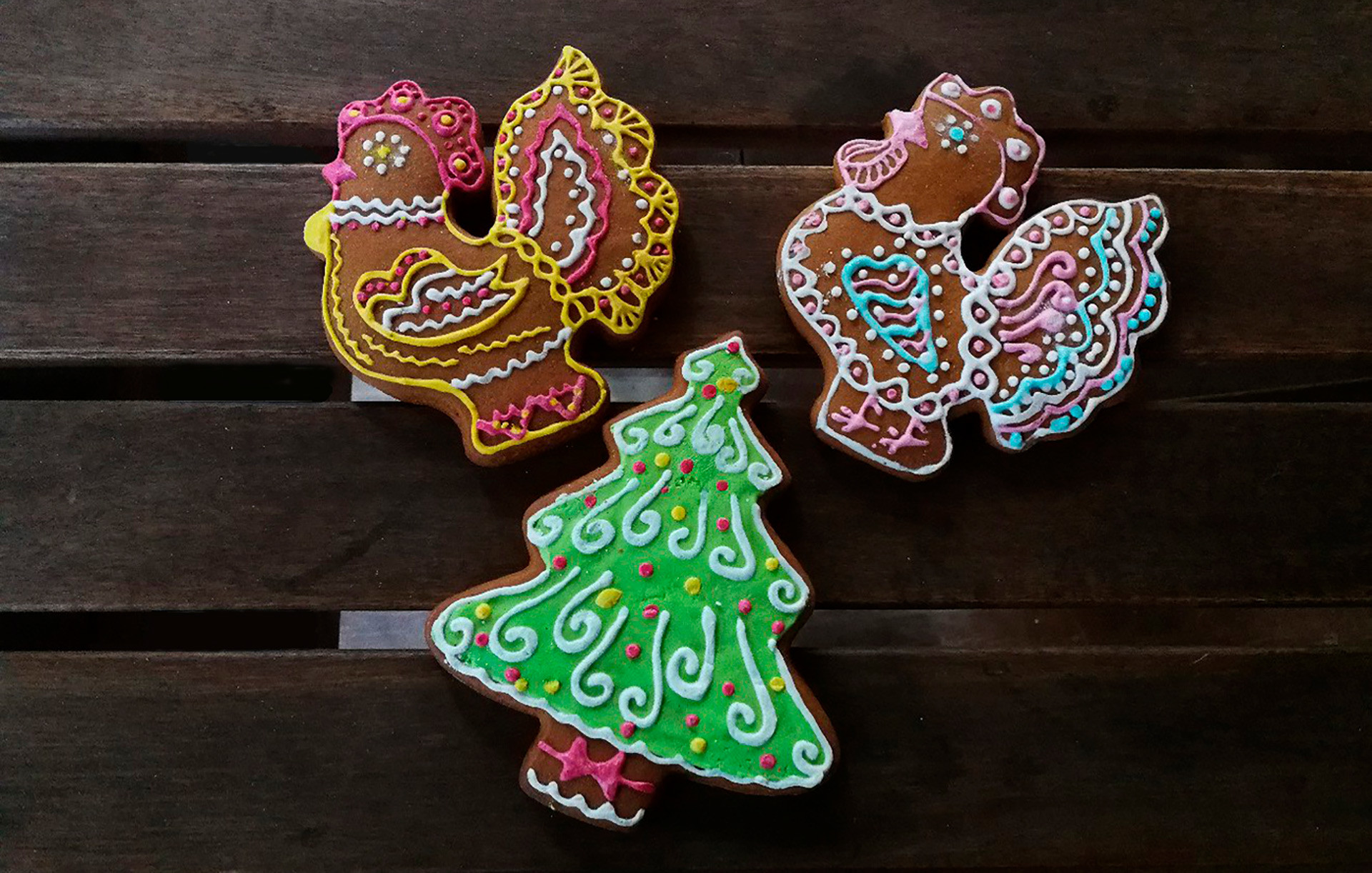 Kozulyi was one of the most popular holiday cookies in some regions of Old Russia, and it’s basically a kind of crispy cut-out gingerbread made using sugar syrup and sometimes decorated with glaze. The best thing about this delicious pastry is that it also could be used as a toy or festive decoration – you can mold it into any desirable shape. Traditional forms were angels, animals, birds, Christmas stars and houses. 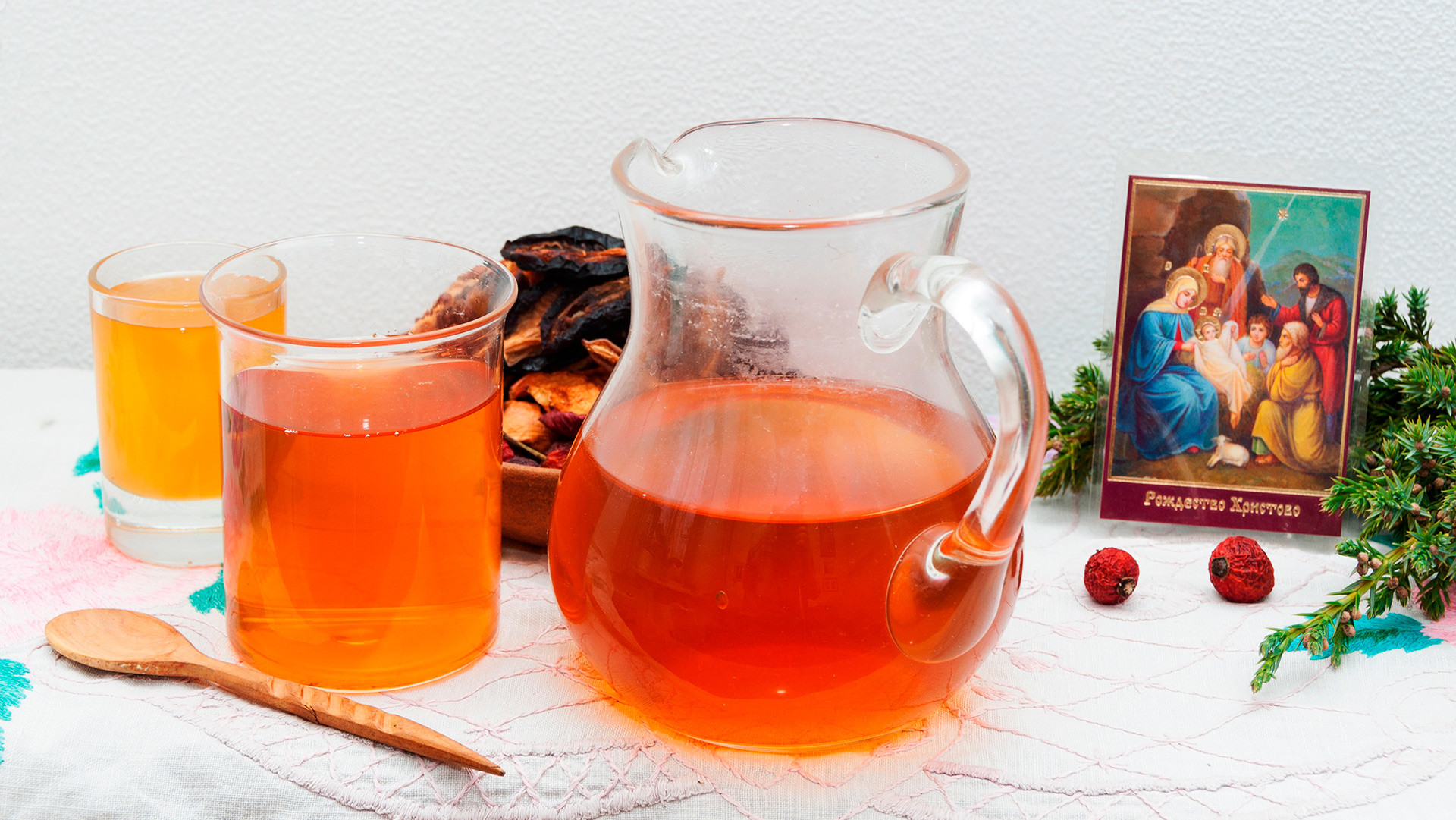 This famous festive dessert drink is a kind of compote made of stewed fruit and berries. People usually infused vzvar with generous amounts of honey, spices and herbs. It’s an amazing healthy Slavic alternative to hot punch or mulled wine.

To explore more about "Russian Christmas" please read how the Russian tsars celebrated it.