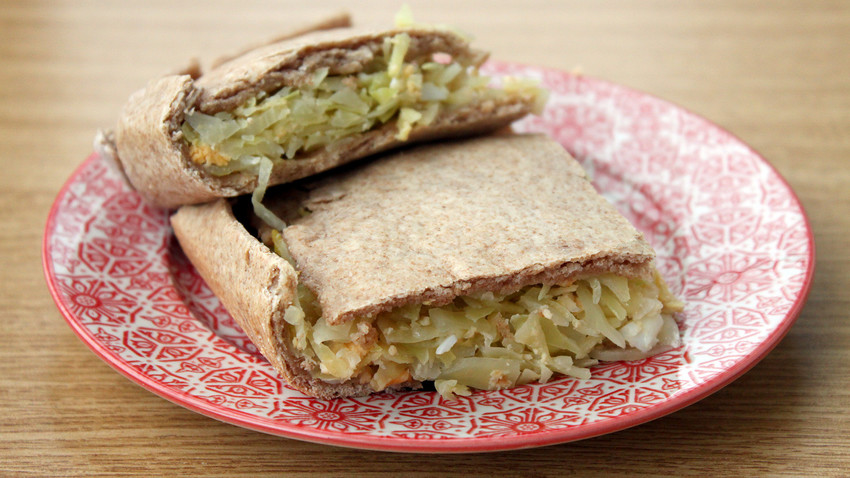 Daria Sokolova
Traditionally this cake is considered one of Russia's hardest to prepare. But this recipe allows you to bake fit for an emperor!

Russians traditionally organize a real feast for Christmas and New Year! A guest who visits his Russian friends will never go home hungry. There will be salt fish, and meats and numerous different salads. And definitely, there will be famous Russian pirogi: rasstegays  with rice and egg, vatrushkas with cottage cheese and pirozhki with potato. If a Russian housewife wants to impress her guests, she prepares a kulebyaka – one of the most ancient and sophisticated pies in the history of Russian cuisine. This pie should have little dough with lots of filling. The dough must be thin and durable to hold such a number of delicious things while being eaten.

The word probably has its origins in the old Slavic verb meaning “to sculpt with hands.” Kulebyaka differs from other types of pies with its shape (usually, it's a bigger cake) and complex filling. Traditional recipes suggest preparing with multiple types of stuffing. For example - mushrooms, meat, cabbage rice. The sweet filling this pie is also popular. Fillings should not be mixed; they are separated by thin pancakes. When slicing the pie, the filling will be seen in one piece.

Fillings could be laid out not only vertically, but also diagonally, depending on the imagination of the chief. Kulebyaka can contain up to twelve layers of filling. In tsarist times the more layers the cake had, the richer the household.

Exactly this pie was described in the “Moscow and Muscovites” book written by Vladimir Gilyarovsky at the end of 19th century. The famous Moscow was stuffed with meat, different fish, fresh mushrooms, chicken, as well as wildfowl. “This was served only at the merchant club and at place, and it should be ordered a day before.”

In the Nikolai Gogol’s novel "Dead Souls" a four-cornered was ordered for the main character: "Put on the one corner sturgeon cheeks and , on another – buckwheat and mushrooms with onions, and sweet , and brains, and something else." Vyaziga, the tendon from the back of the sturgeon, used to be a very popular ingredient for fish pies. Like sturgeon cheeks, these exquisite fillings remain only in literature.

Today many Russians cook with only one filling. And the result is also delicious! Like this with cabbage and eggs. 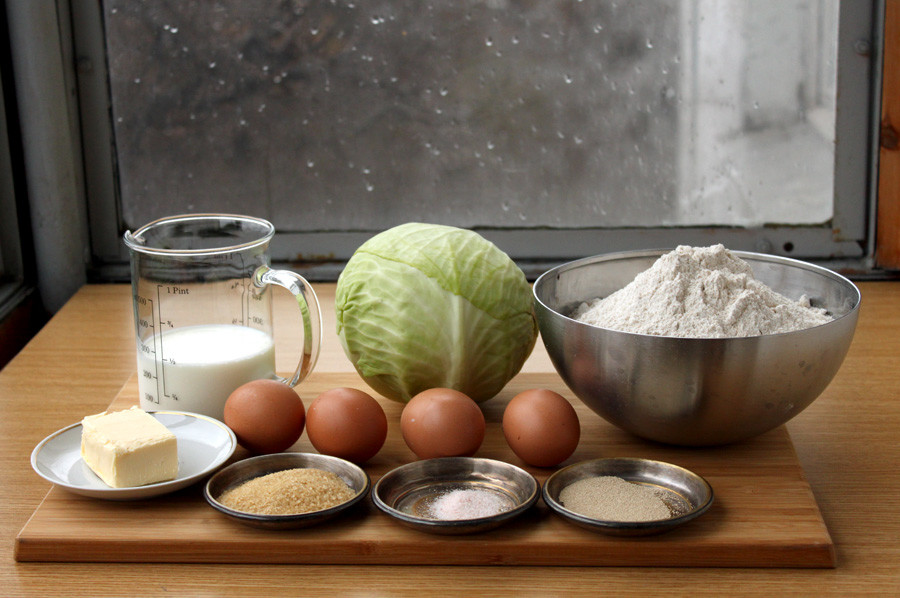 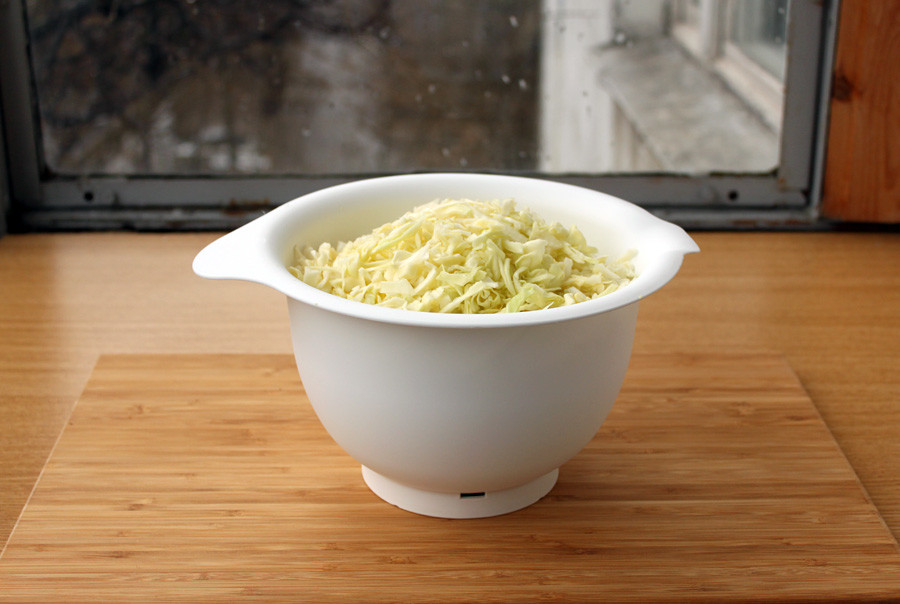 1. Put the sugar and baker’s yeast in warm milk and leave for 10-15 minutes until the yeast rises.

2. Sieve the flour into a deep bowl to oxygenate it. Mix the flour with salt and butter. The butter should be at room temperature: it will be easier to mix. Add an egg and knead the dough. It should be elastic. You can use wholegrain wheat flour and brown sugar.

3. Place the bowl with dough into another bowl with warm water. The dough with yeast should be left to rise for a least an hour, which gives you time to prepare the filling.

4. Thinly slice the cabbage, place in water using the deep pan and bring to boil. Drain, add butter, sugar, salt and one raw egg. Cook for five minutes and turn off the stove. Add one chopped, boiled egg. 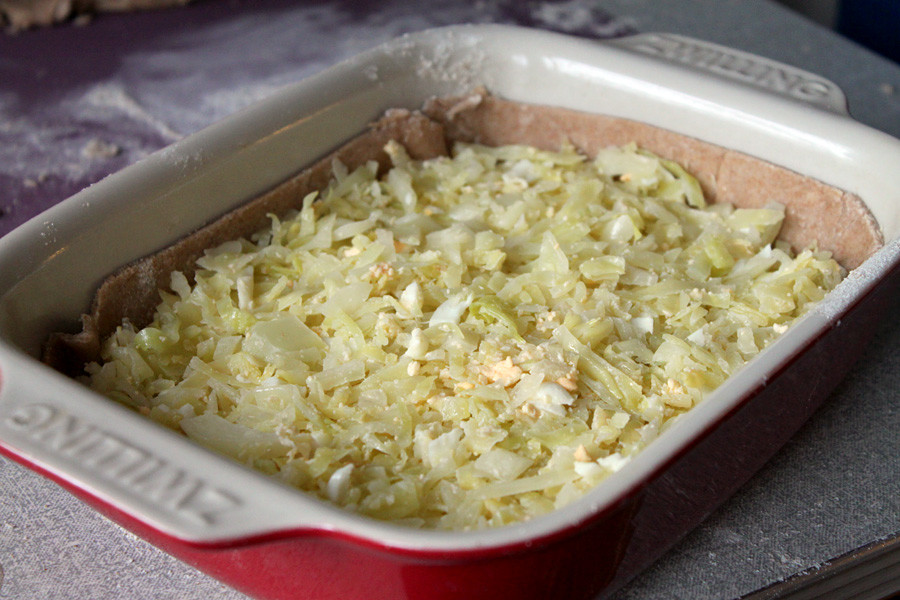 5. It’s time to assemble the pie! First, you need to separate your dough into two parts: the bottom and the crust (if you have small baking dishes, you can prepare two cakes). Roll out the dough: it should be not very thick, about 4-5 millimeters. Oil the dish and add the filling on top of the first piece of dough and then cover it with the second piece. Warm the oven to 200 C (392 F) and bake for 30 minutes. Brush the crust with beaten egg five minutes before removing to give it an attractive sheen. Serve warm. 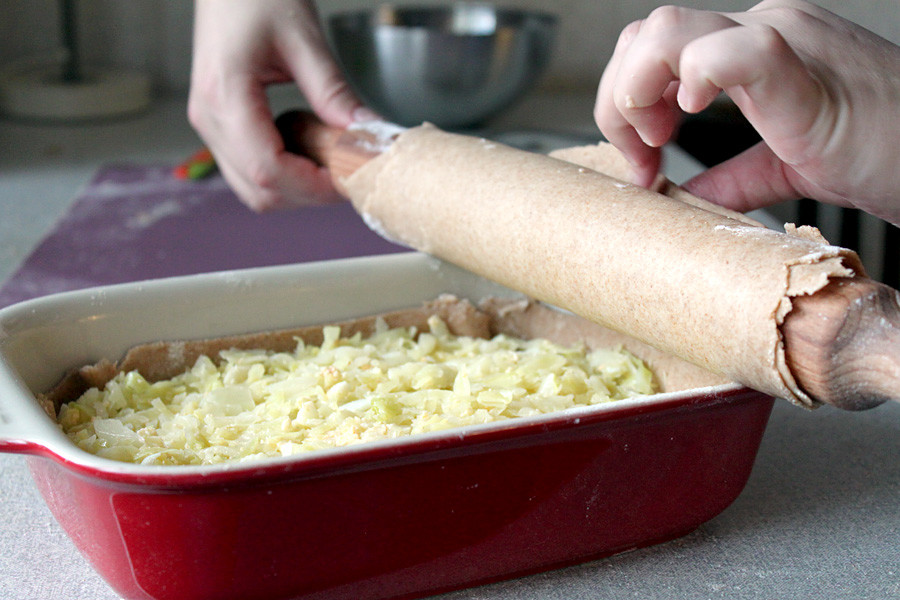 Do you know how to make a classic Russian style New Year dinner? Check this list of festive dishes and don’t forget to ring in the New Year like a Russian!