8 dishes Russians miss the most when far away from home 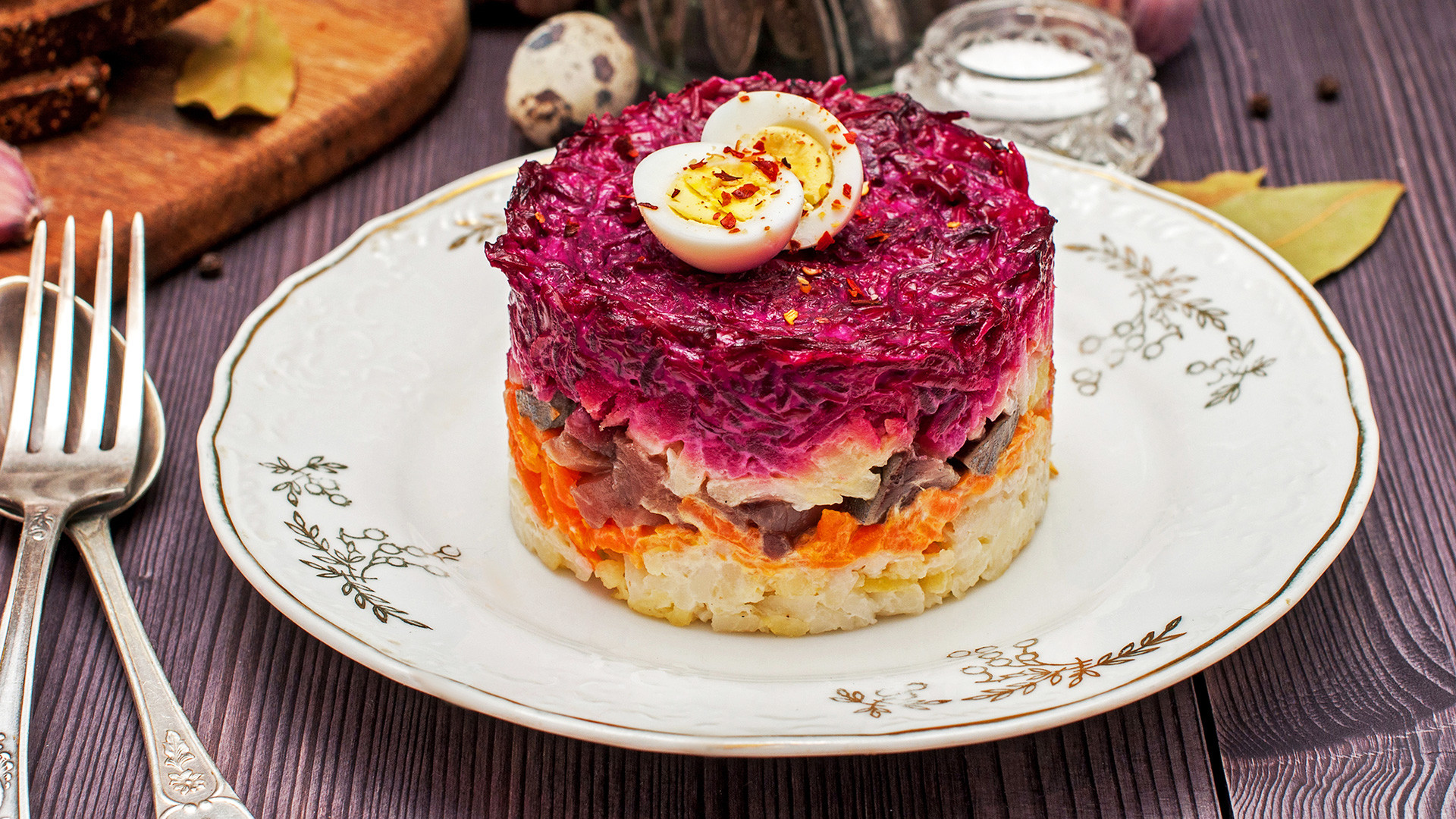 Legion Media
These are the comfort foods Russians abroad find themselves yearning for. Try them once, and you might become a regular at your local Russian food store too.

You can find most foods items from home in Russian stores abroad, but you’ll never forget the taste of your mother’s blini or your grandma’s dumplings! Here are the dishes Russians living abroad miss the most. 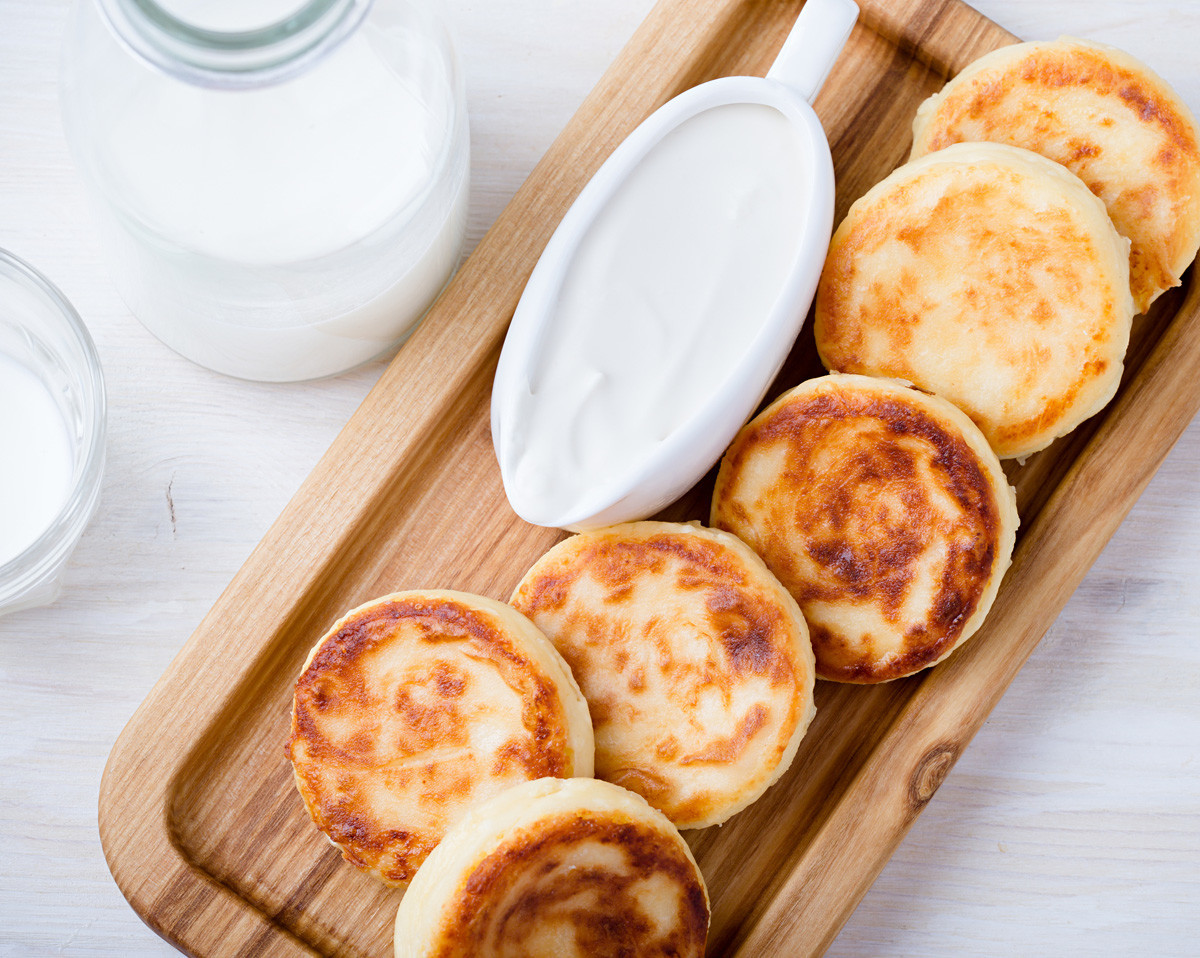 These pancakes made from tvorog (which is kind of like cottage cheese) are the breakfast of champions for many Russians. Cooking them is easy: Tvorog is first sweetened with sugar, kneaded into a dough with flour and eggs and then fried or baked in the oven. They are served with sour cream or jam. But for Russians abroad, the problem is finding proper Russian tvorog. You can get cottage cheese in most places, but it’s too soft, which makes it impossible to prepare the same syrniki as at home. And what a shame that is! For Artur Khachaturyan, who now lives in the Netherlands, syrniki are what he misses most because they were the main dessert in his childhood. 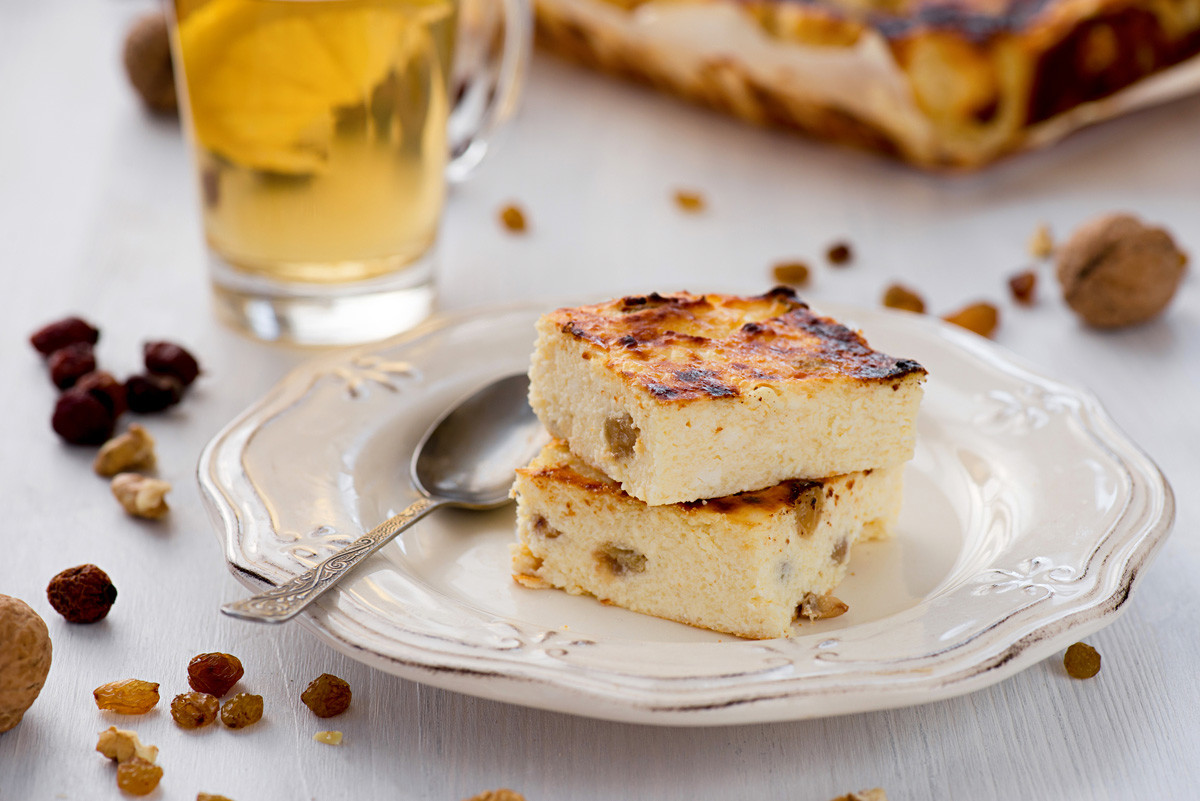 Zapekanka means the world to Russians. Whether in the school cafeteria or on the dinner table at home, you can find it anywhere. At heart, Russian zapekanka is a type of casserole: an oven-baked dish consisting of different ingredients. The best thing about zapekanka is that you can prepare it with almost any combination of ingredients, which is why it’s usually thought of as a “leftover dish.” For Maria Grigoryan, who now lives in Croatia, her favorite zapekanka is made from tvorog and raisins. Try it! It really is delicious! 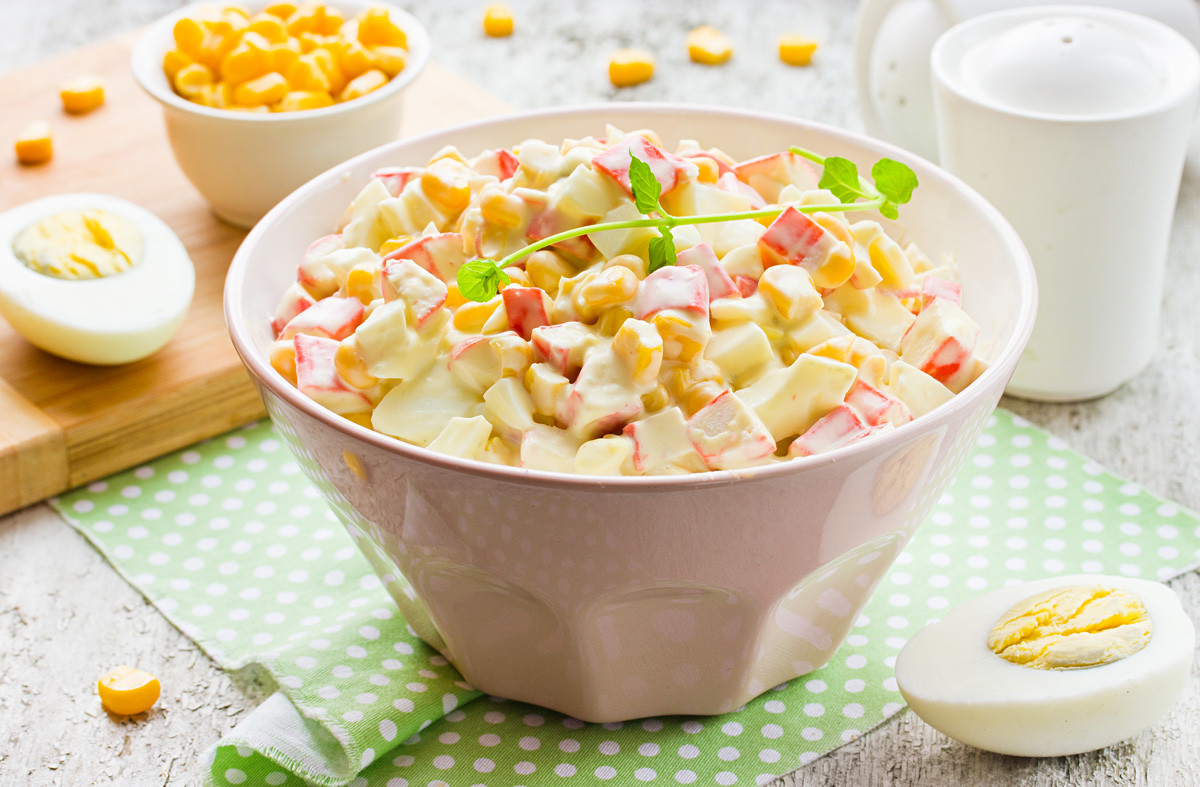 crabs are hurt in the creation of this popular snack since it’s actually made from fish. Nevertheless, in the 1990s it became so popular in Russia that many kids couldn’t forget the taste of crabsticks even after they grew up. The most widespread dish is a salad made with crabsticks, rice, boiled eggs, herbs (including, yes, dill) and canned corn dressed with lots of mayo. Best salad ever! For Oleg Chernov, who lives in the United States, it brings back memories of the Russian New Year. 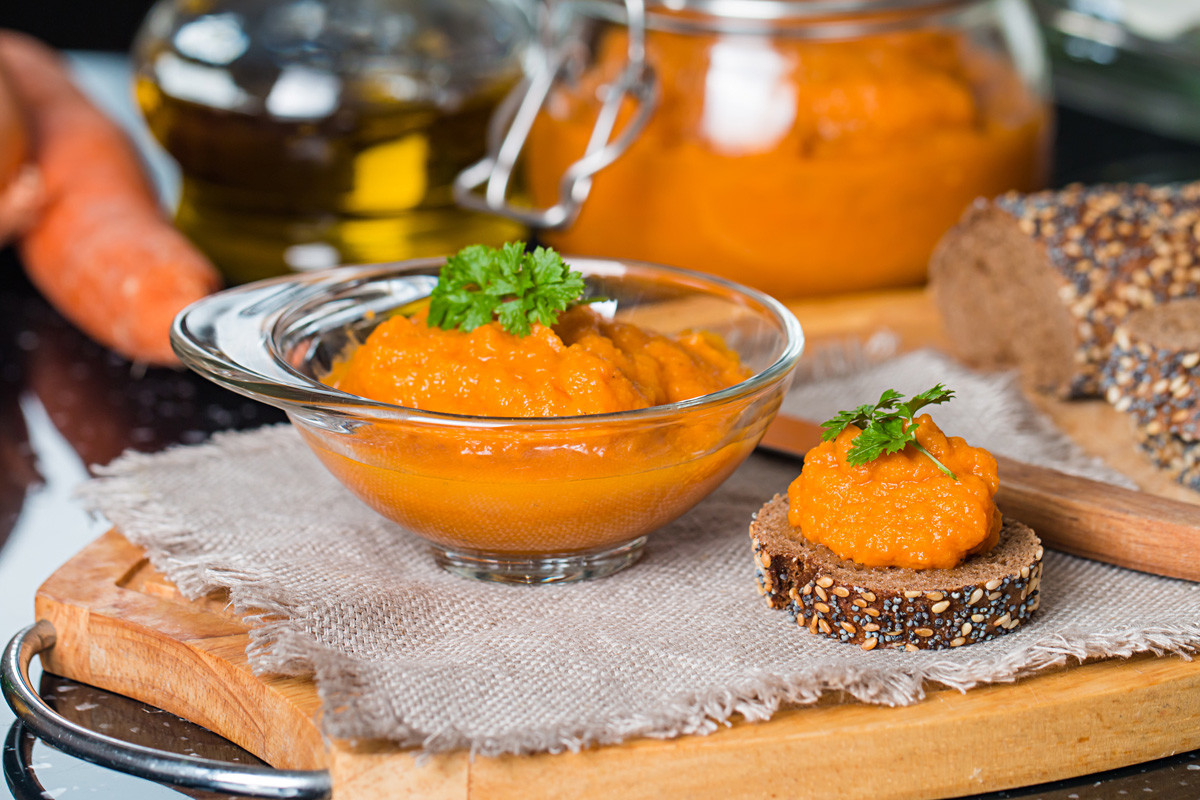 Believe it or not, vegetable caviar is no less popular than fish caviar in Russia. Squash caviar (which is actually just a kind of puree) became popular thanks to the Nikita Khrushchev’s wife, and ever since people have appreciated this simple and healthy appetizer. Maria Stambler says she still misses it now that she lives in Hungary! 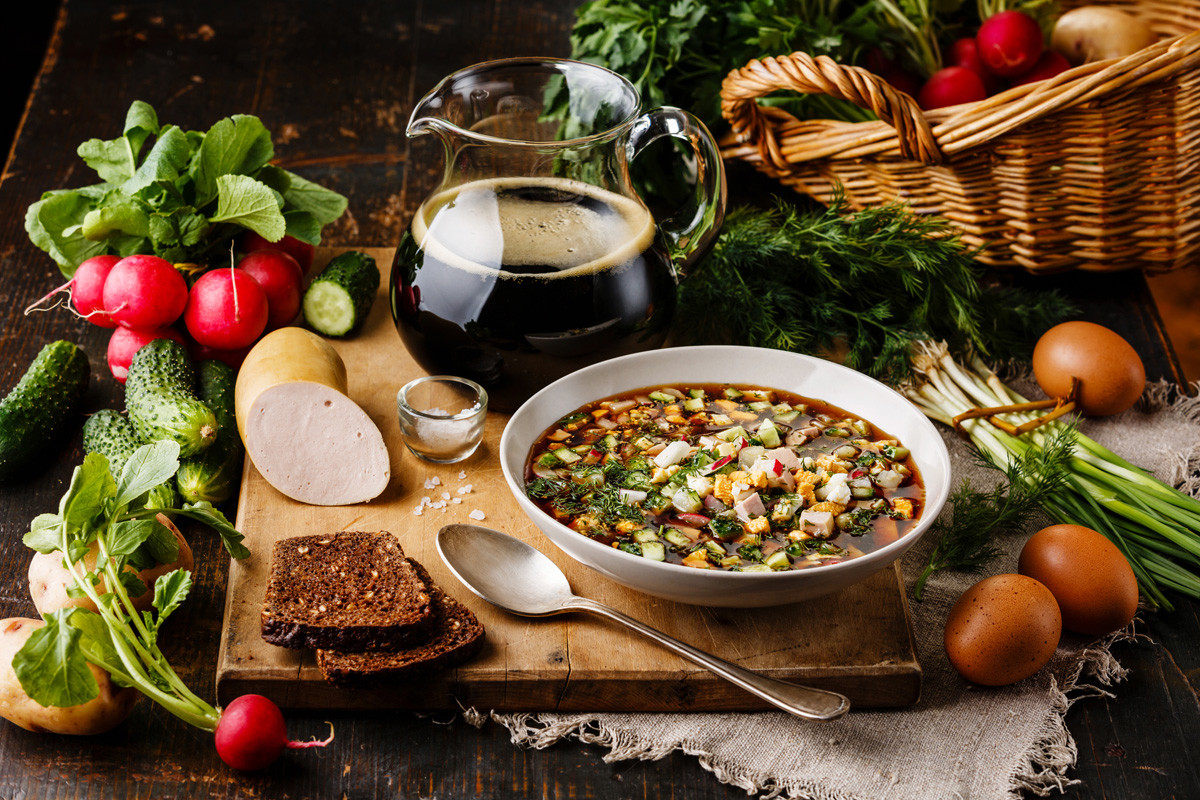 No doubt, this is one of the weirdest dishes in Russian cuisine. Just imagine taking the ingredients for Olivier salad and dunking them in kvas or kefir. Then add sour cream. That’s exactly what Russians’ favorite cold soup for the summer looks like. Seems like an impossible combination, right? Maybe so, but Russians love it.

6. Herring under a fur coat 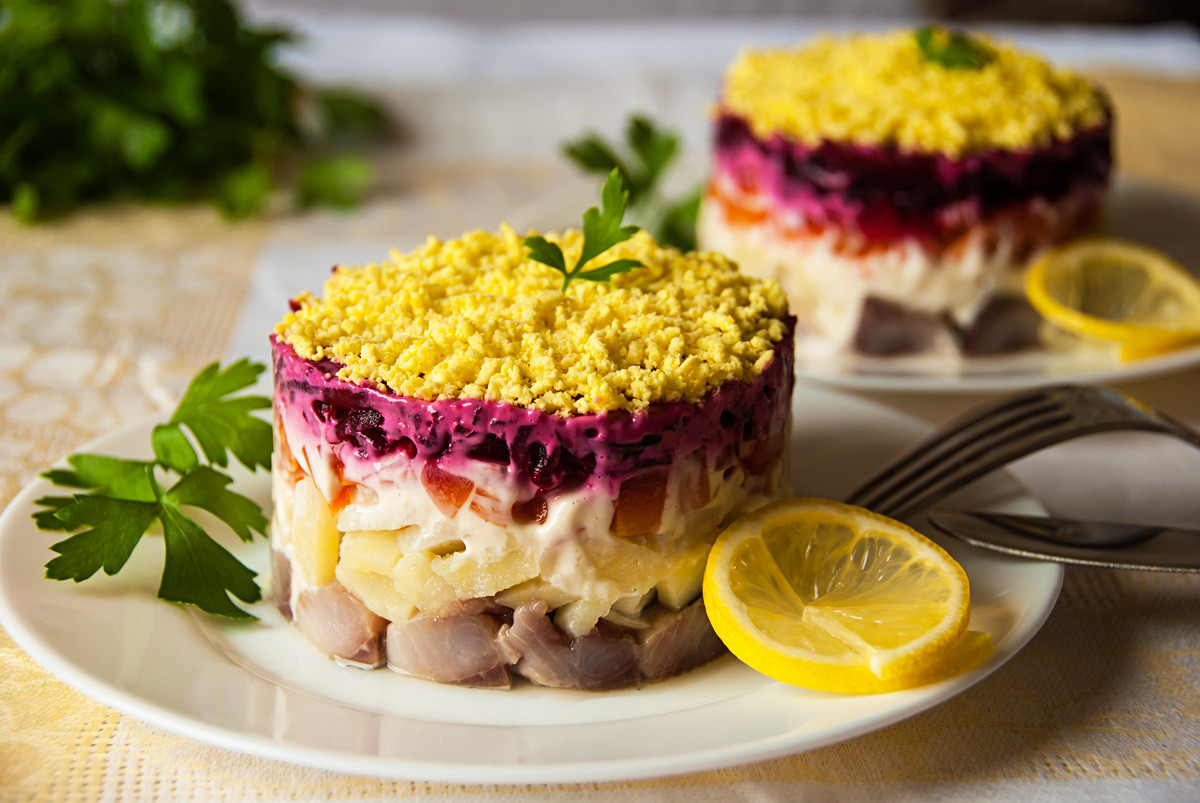 Viktoria Zavyalova recalls that this appetizer was one of her favorites before she moved to the U.S. and became a vegetarian. And just what does this extravagant salad look like? It is an elegant combination of herring fillet, boiled carrots and potatoes, all stacked in layers of mayonnaise. It’s beautiful to look at and perfect for any party! 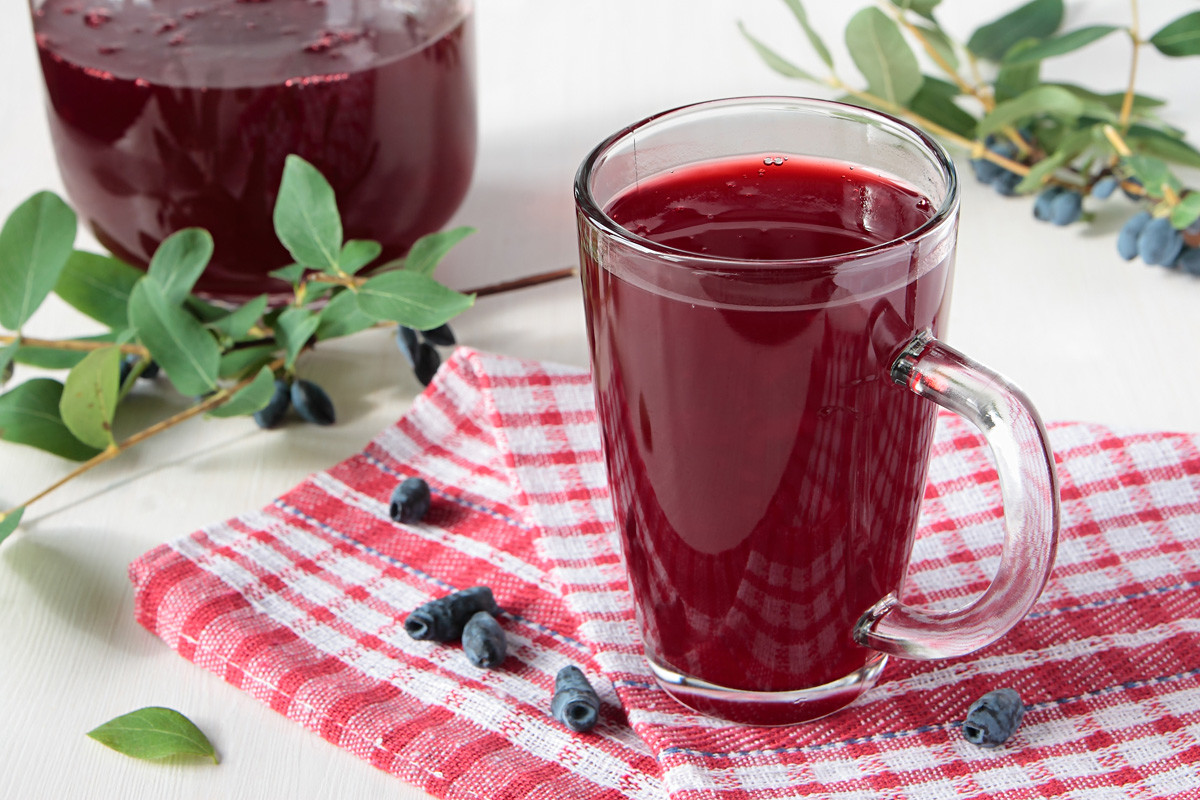 This one is something in between juice and sweet soup. Which might not sound so good, but it’s actually a very tasty and healthy drink that even kids usually like! Kissel is like berry juice with starch in it. In any Russian store — even abroad — you can find kissel in solid form that you just need to dilute with water. But guess what kids like to do with it? Yeah, they just suck on the dry berry brick! 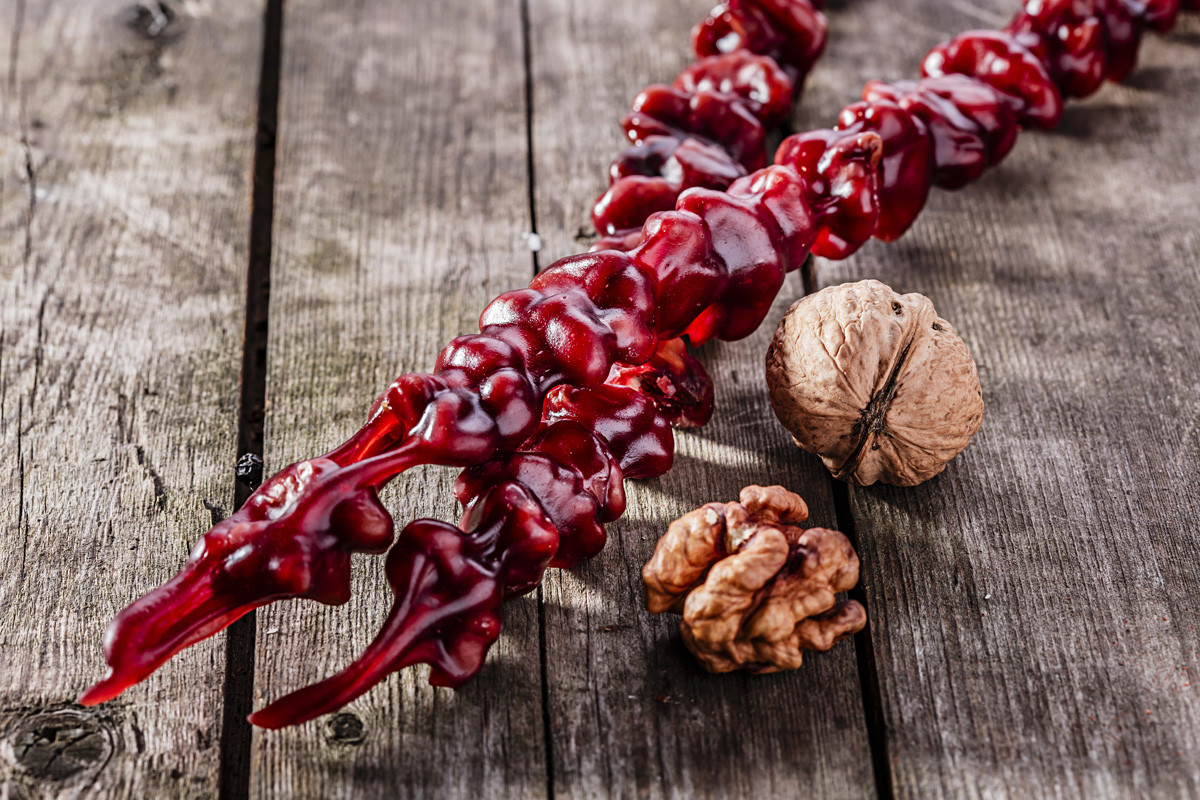 This dessert made of fruits and nuts was brought to Russia via Georgian cuisine and adopted very quickly. Now it’s impossible to imagine Russian resorts in the south without churchkhela vendors all over on the beaches and in every market. Made of nuts, plain flour and grape juice, churchkhela has a very rich taste and makes for a great alternative to chocolate and candy.