Why wedding ‘karavay’ can't be bought in the store, but only baked at home 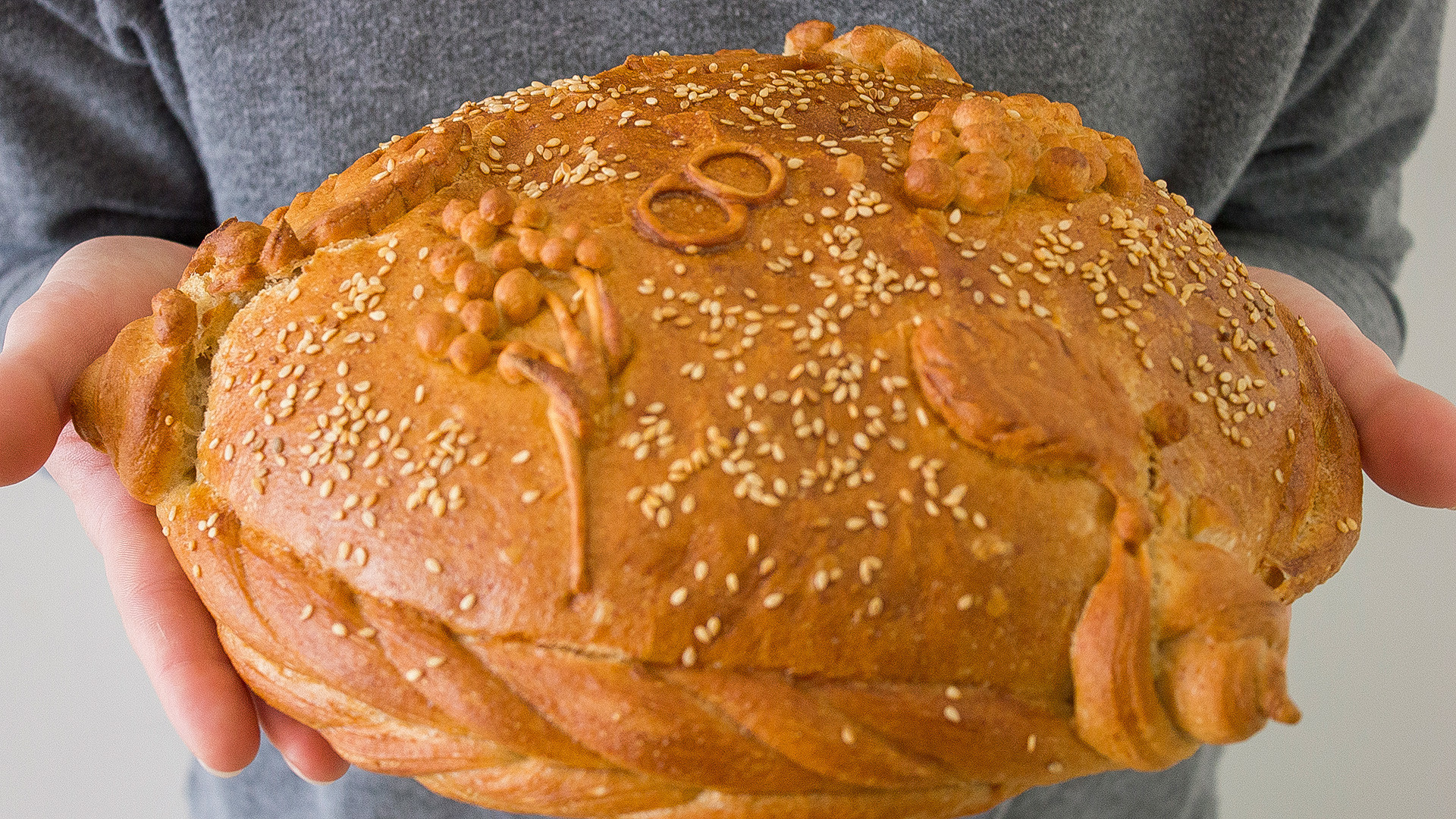 Vasilisa Malinka
Married women with children are supposed to cook karavay for a wedding. Otherwise, the newlyweds won't be happy.

The tradition to make karavay bread for a wedding is one of the most venerable in Russia, and it is still considered to be the main symbol of the marriage ceremony, regardless of the format of the wedding.

Karavay is a type of bread known since pagan times. The word is believed to have originated from korova, which in an ancient Slavic dialects meant “bride.” The suffix “ay” in the word appears as a symbol of a bull, that is, a man. Hence, karavay represents fertility and a person, either feminine or masculine. The funny thing is that today the word korovahas only one meaning - “cow,” which is certainly not something that a bride wants to be called!

Traditionally, karavay is a ritual bread, so it’s preparation is a combination of different ceremonies that could take a few days. For example, special traditional tools were used to ground the flour on the ceremonial millstone. Only married women with children and strong family ties were entrusted to make the dough; through this process they were sharing their family happiness with the newlyweds. Singing songs and prayers was a joyful duty of this ritual.

Karavay is considered a symbol of happiness, wealth and abundance. So, the bigger it was, the happier and richer the newlyweds would be. Sometimes, it would even be the size of a wedding table. The bride and groom were the first to take a bite of the karavay, and then they would share it with all the guests, as if sharing their happiness. The decorations on karavay were typically handed out to unmarried girls, as if helping to fulfill their  wish to find their future family bliss. 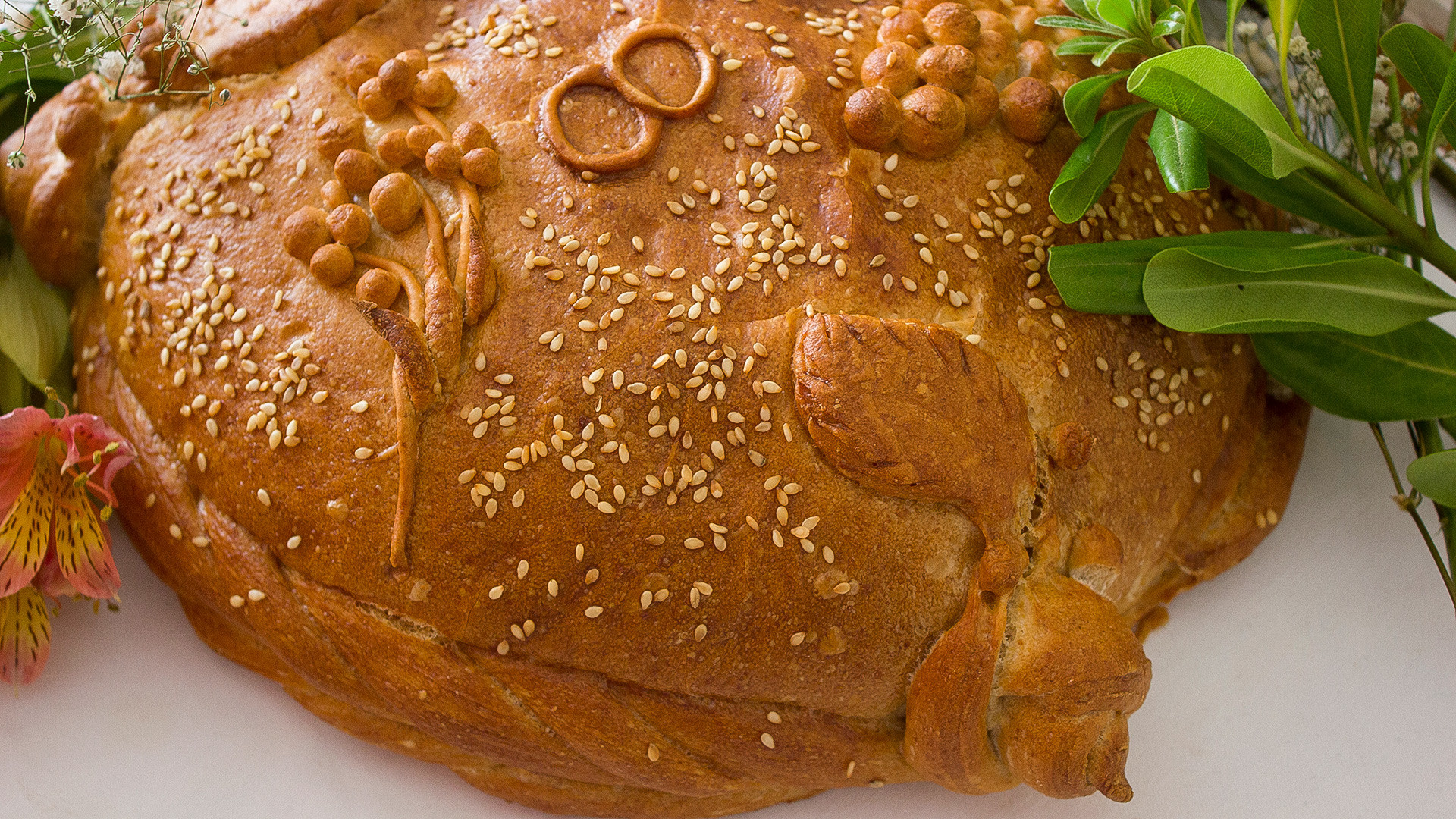 The typical shape of karavay is round, representing the sun. Among the ancient Slavs, the god of the sun was considered the main deity, and it was imperative to win his favor for a new family. The decorations of karavay bread were intricate. Before baking, the loaf was decorated with dough leaves and flowers, and when baked it was adorned with wheat spikes and small branches of viburnum. Dough decorations were traditionally two rings or a pair of swans, which was a symbol of loyalty in love. Wheat symbolized abundance and prosperity, and viburnum – love and children in the family.

Learn how to make karavay, and you will also want it for your wedding!

Ingredients for the mother dough:

1. Mix the ingredients in a bowl and cover with cling wrap. 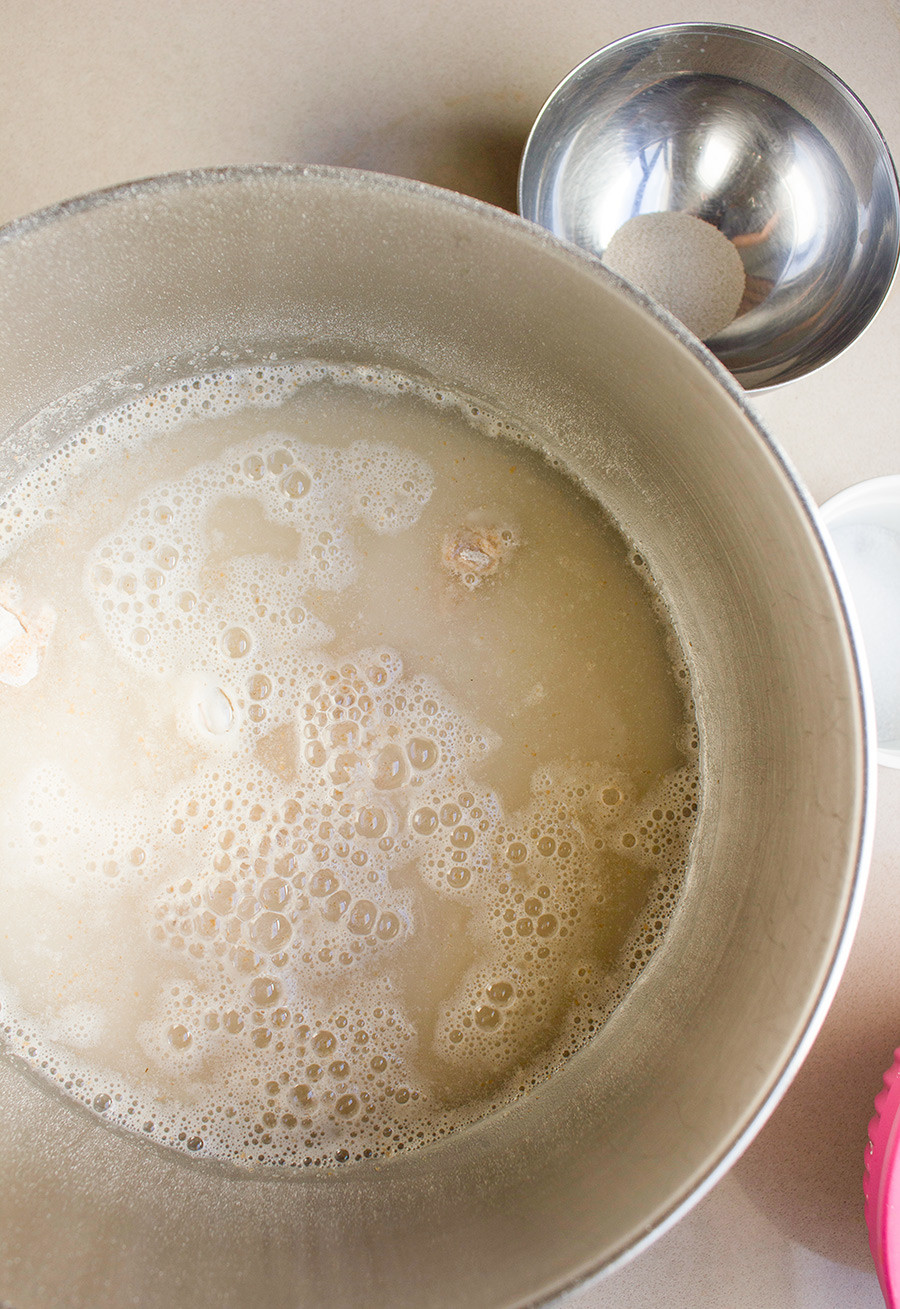 2. Let your mother dough sit at a room temperature and then put the bowl into a fridge for 12-16 hours. 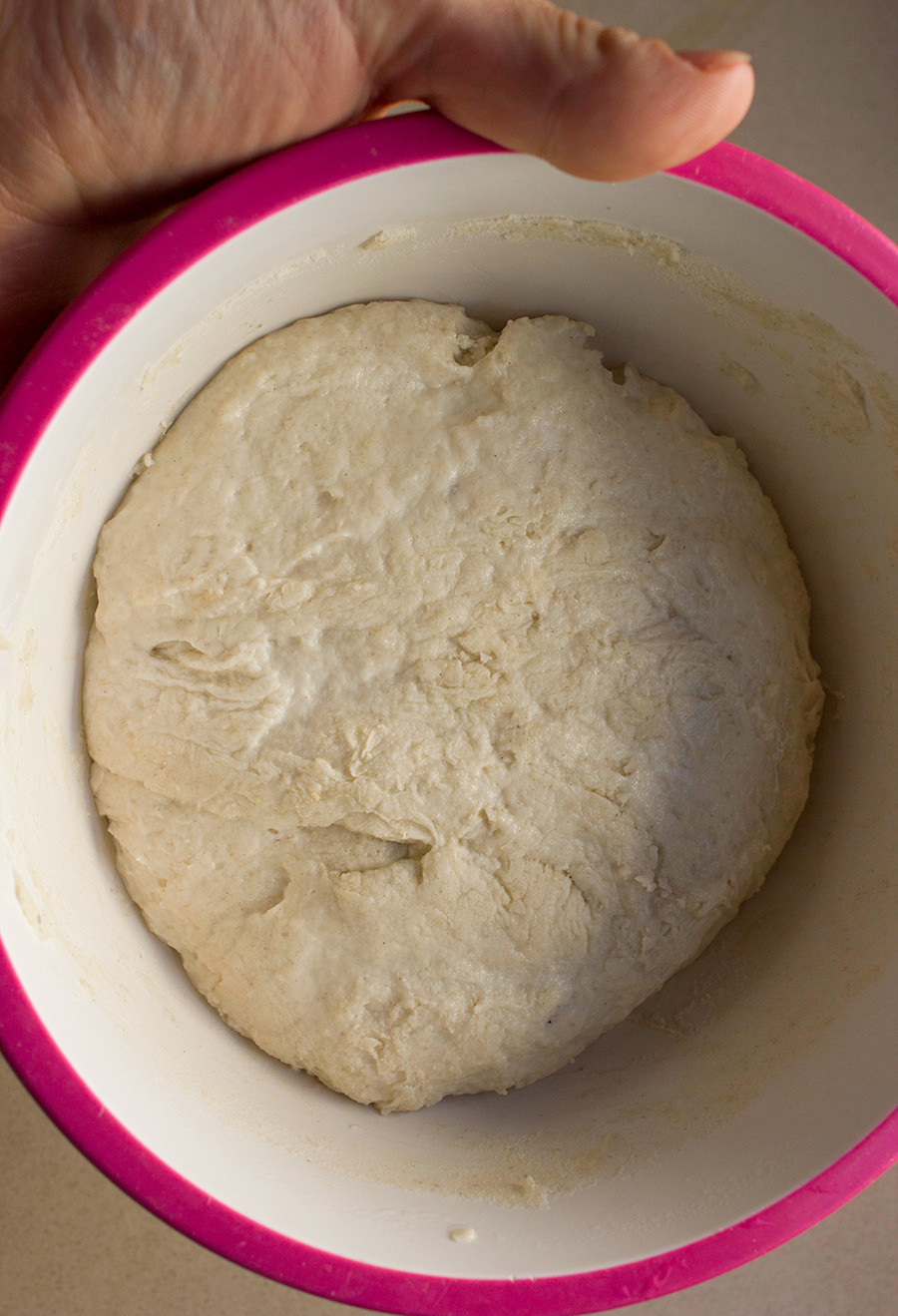 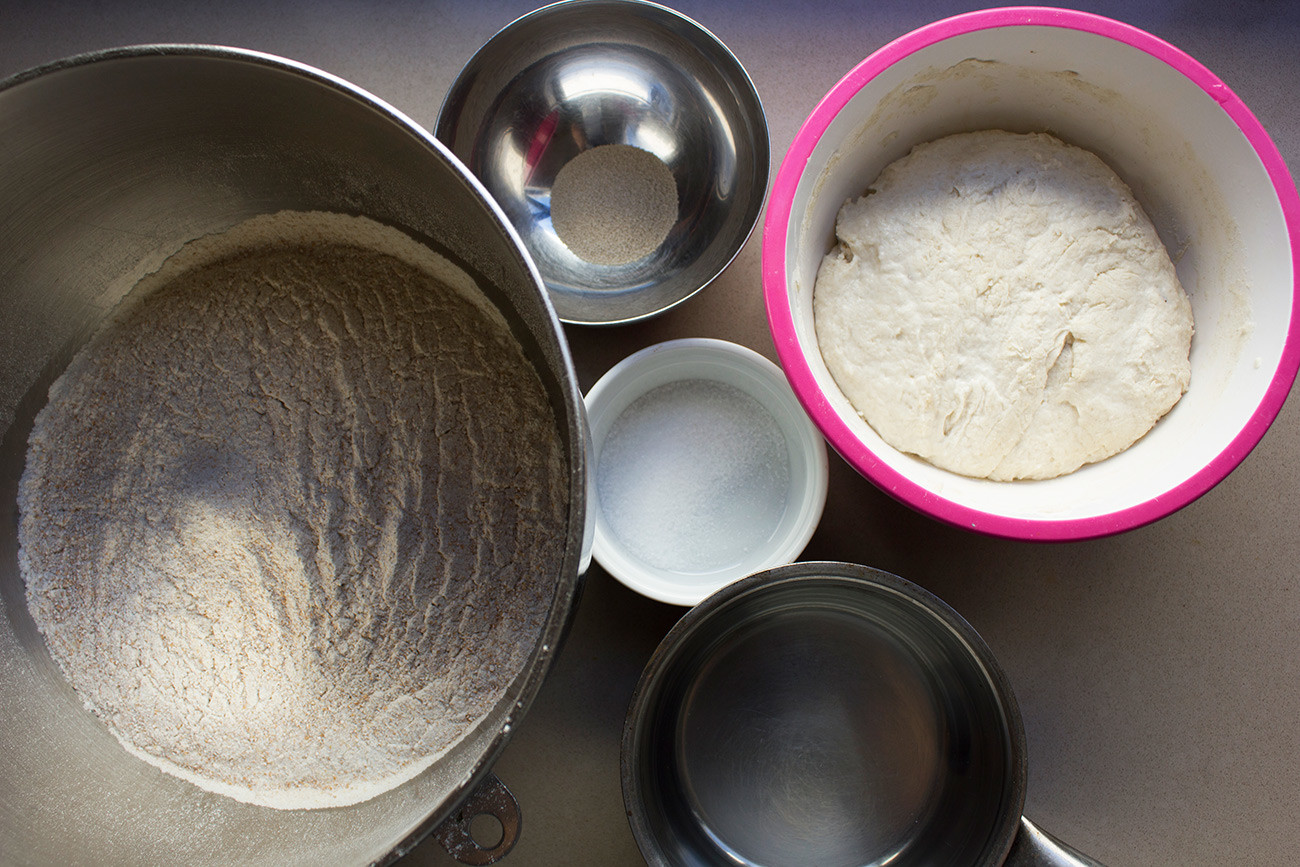 Sift both sorts of flour into a mixer bowl. 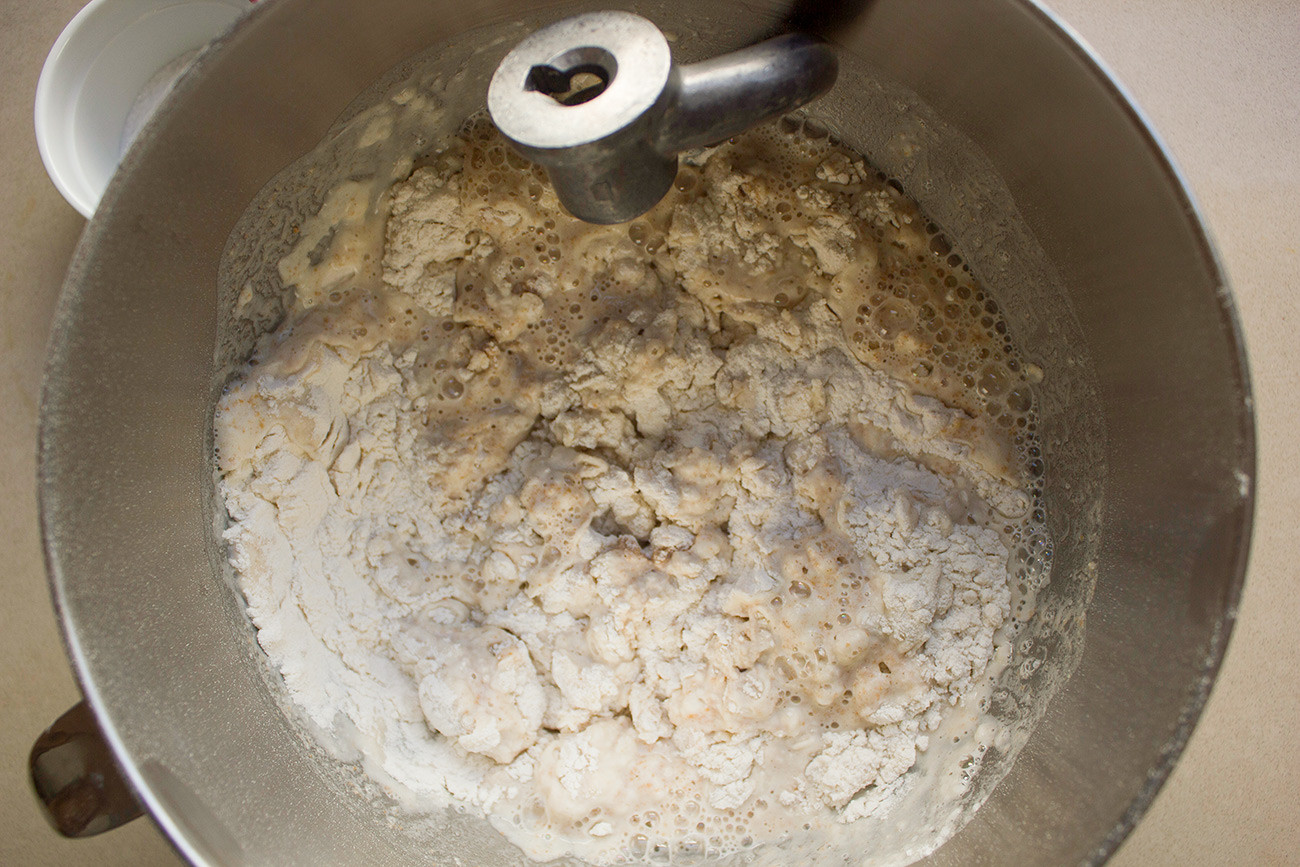 Warm the water until 28-30°C, and pour into the flour mix. Then sprinkle the yeast on top and wait for it to dissolve (just a few seconds). Add the mother dough to the mixture, and knead the dough with a hook attachment on medium-low speed for about 5 minutes. 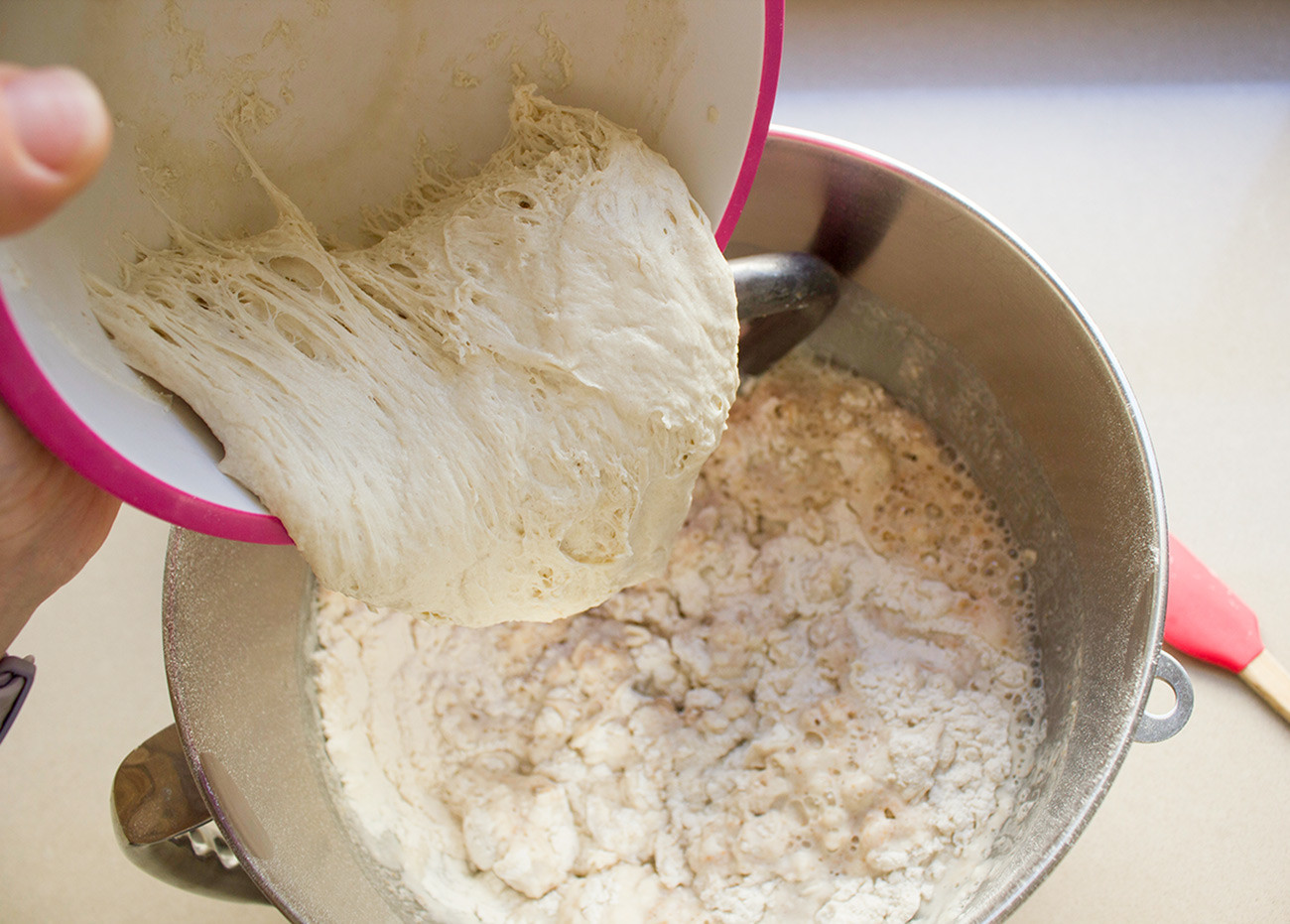 At this point your dough should look homogenous. 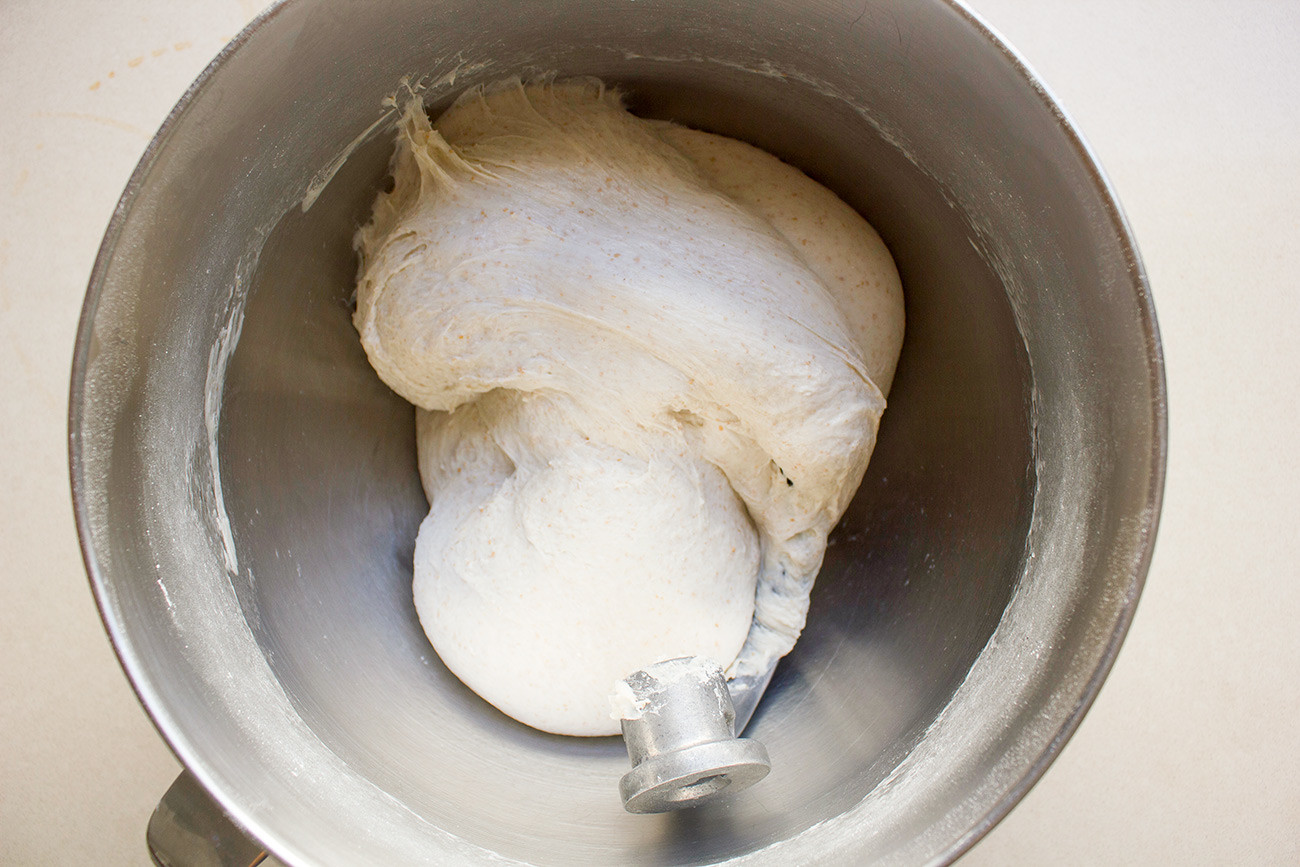 Now add the salt and knead the dough at the same speed for 8 more minutes. Your dough will be pretty stretchy. 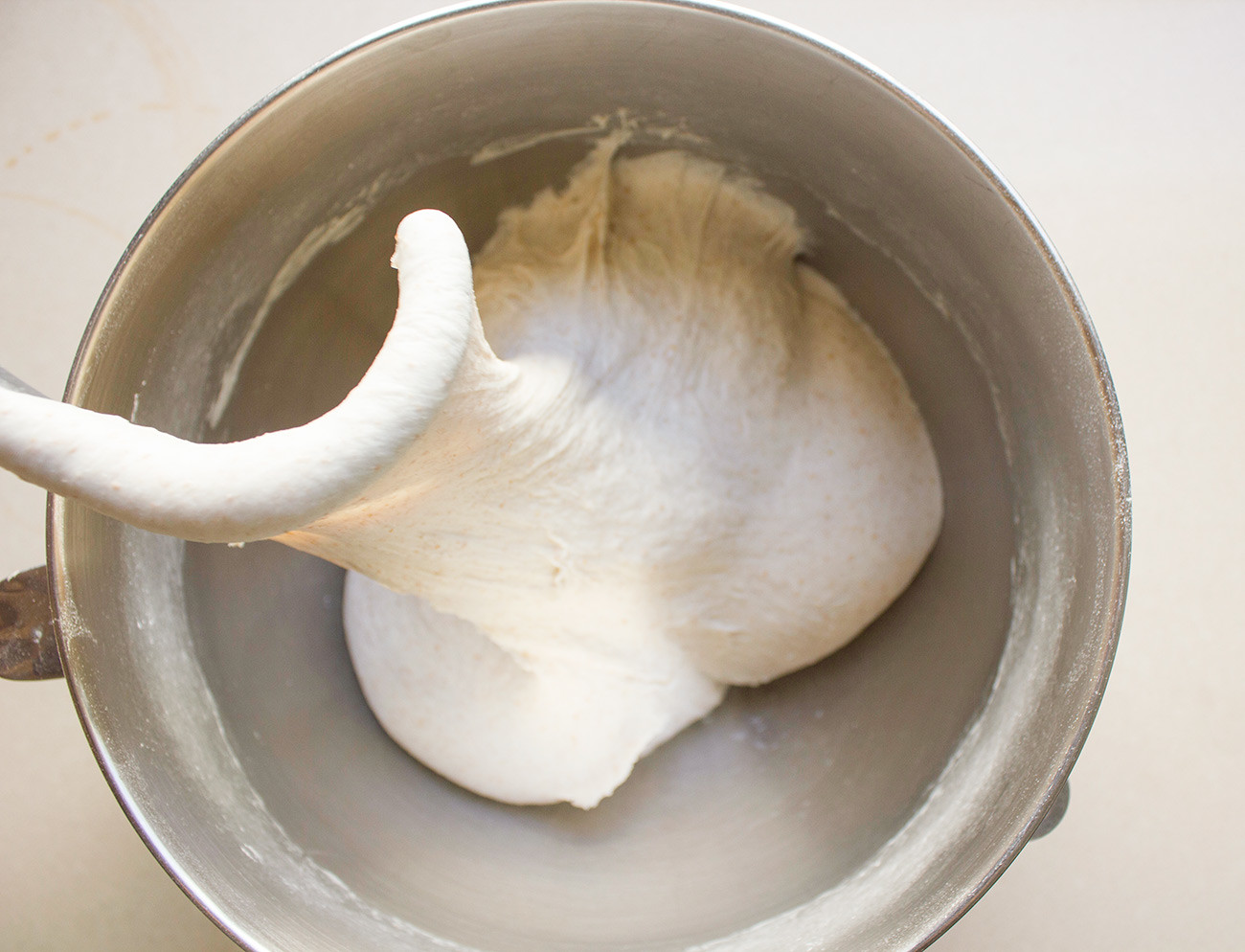 Cover your dough with cling wrap and let it rise in a warm place for 1.5 hours. 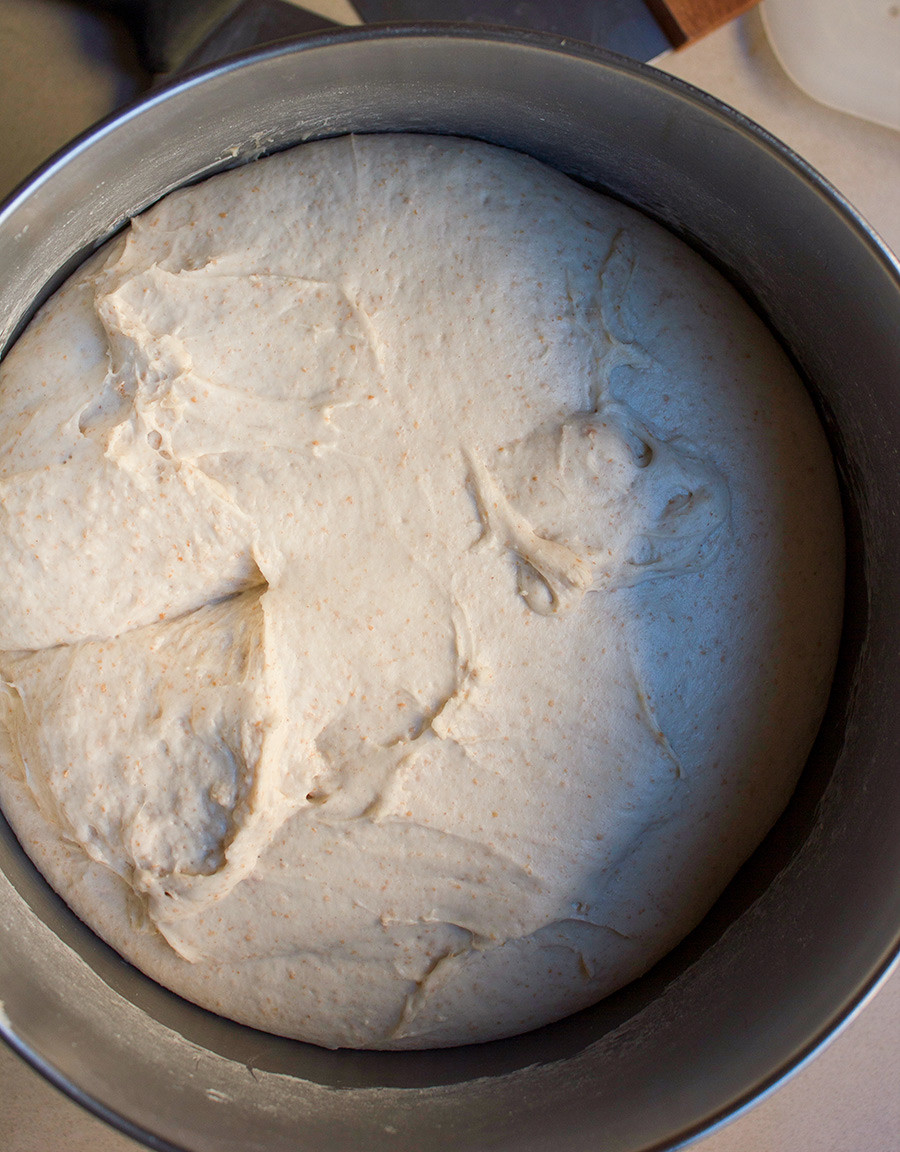 The dough should double in size. Now put it out on your working surface and knead  just a little for all the bubbles to deflate. 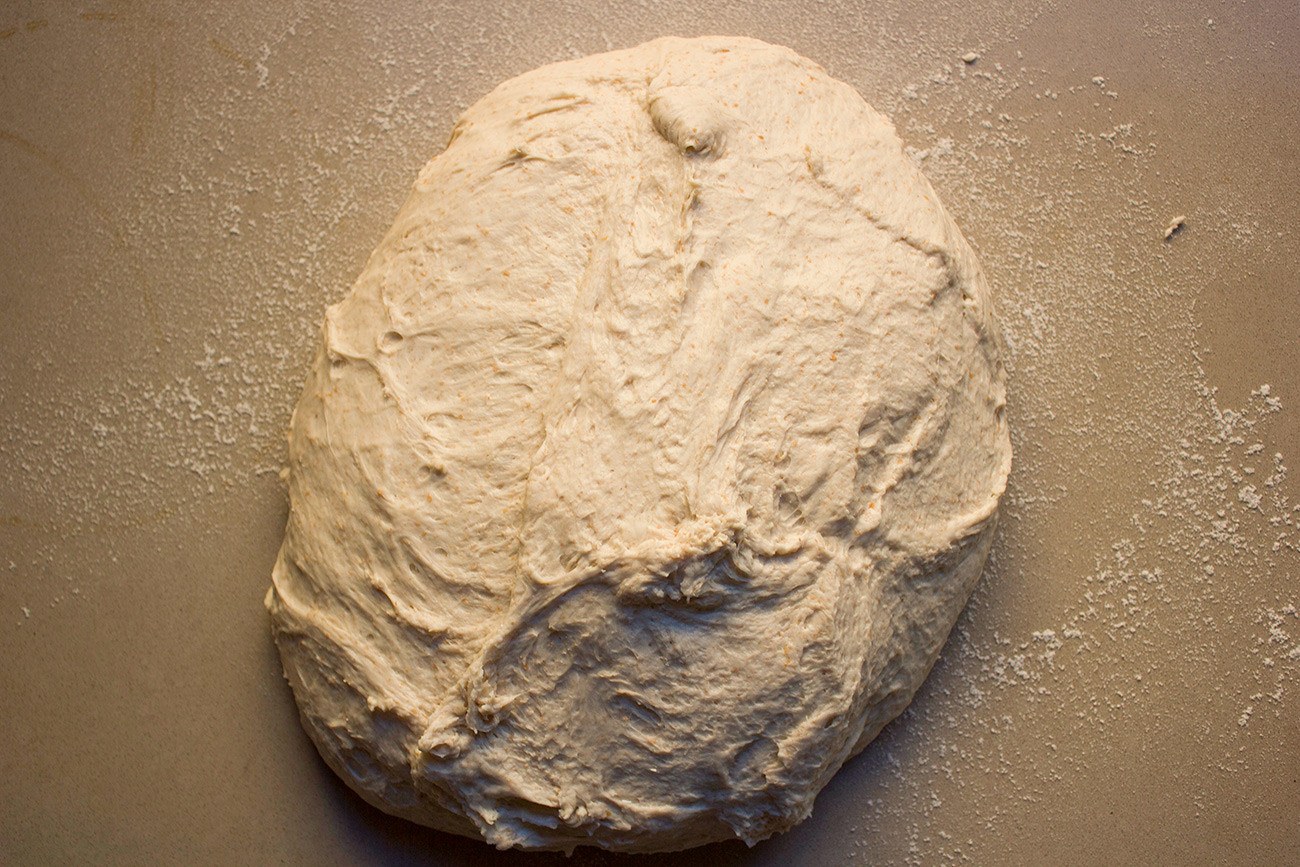 Separate the dough into two parts. 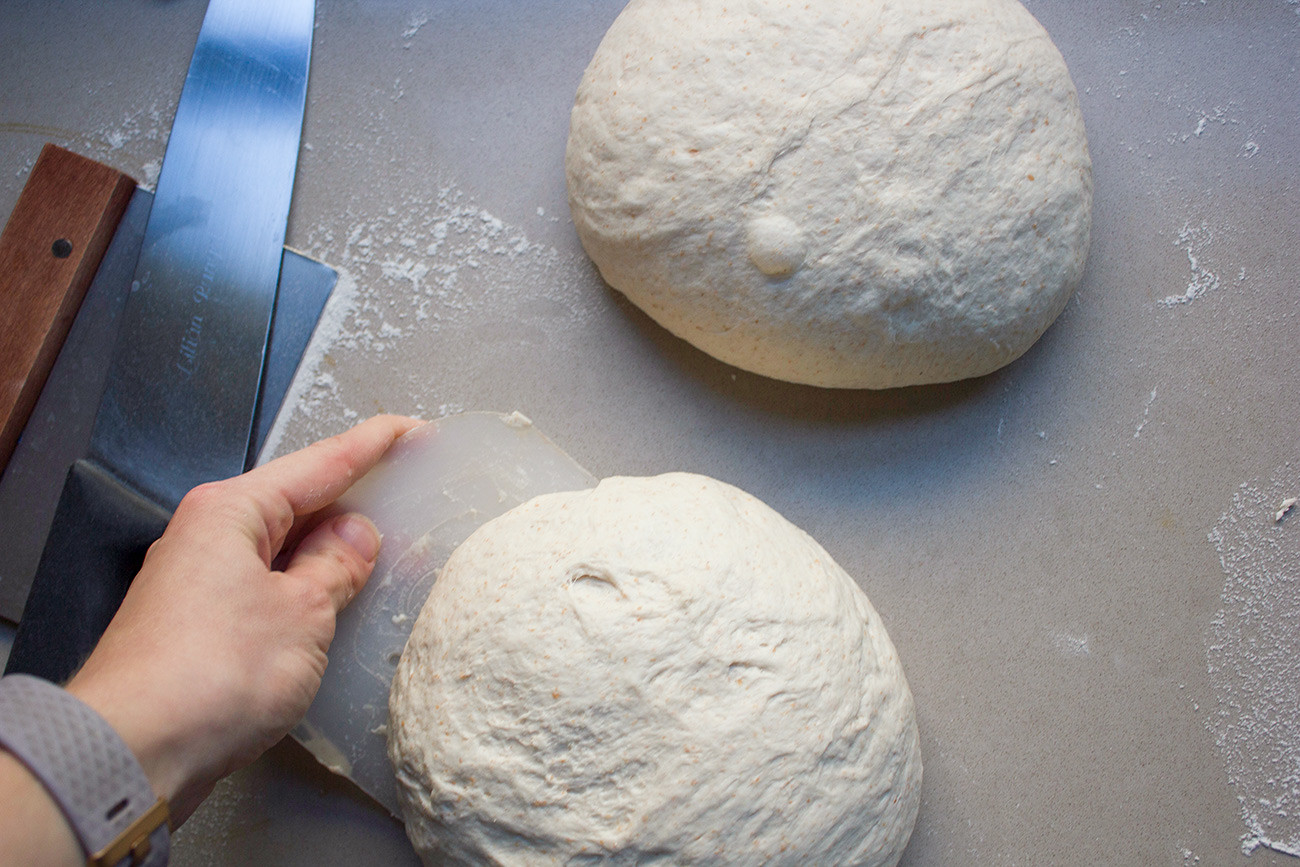 One part should be about 2/3 of the dough, which is the part that you need to roll into a ball and put on the baking tray lined with parchment paper, and brush it with the egg wash. 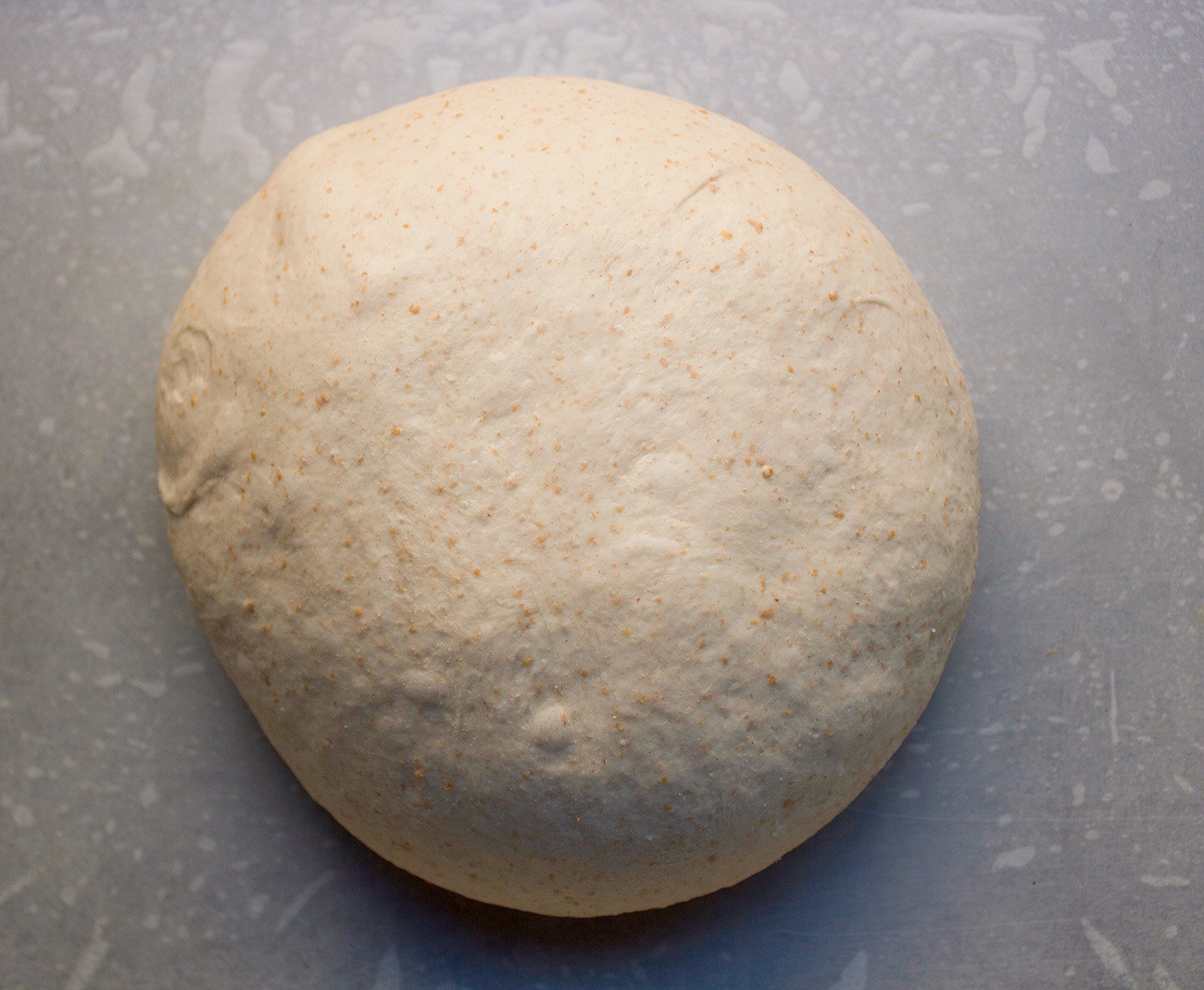 Heat the oven until 230°C and put an empty sheet tray on the bottom. 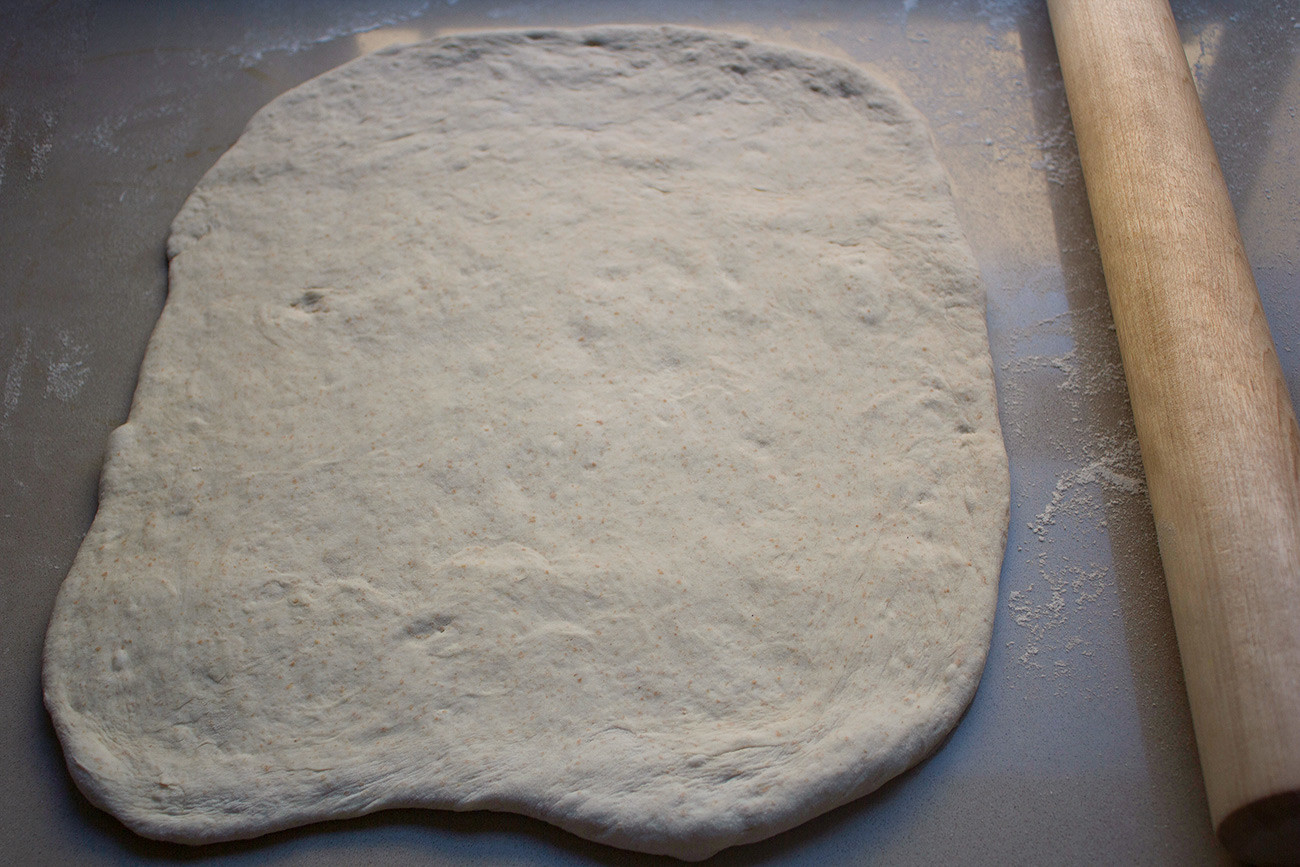 The second part of the dough (about 1/3 of the total ) we will use for the decoration. Cut some strips of dough to make them into braids and spirals. Use cutters to make flowers and heart shapes. Roll out little balls to form berries. Decorate your karavay! 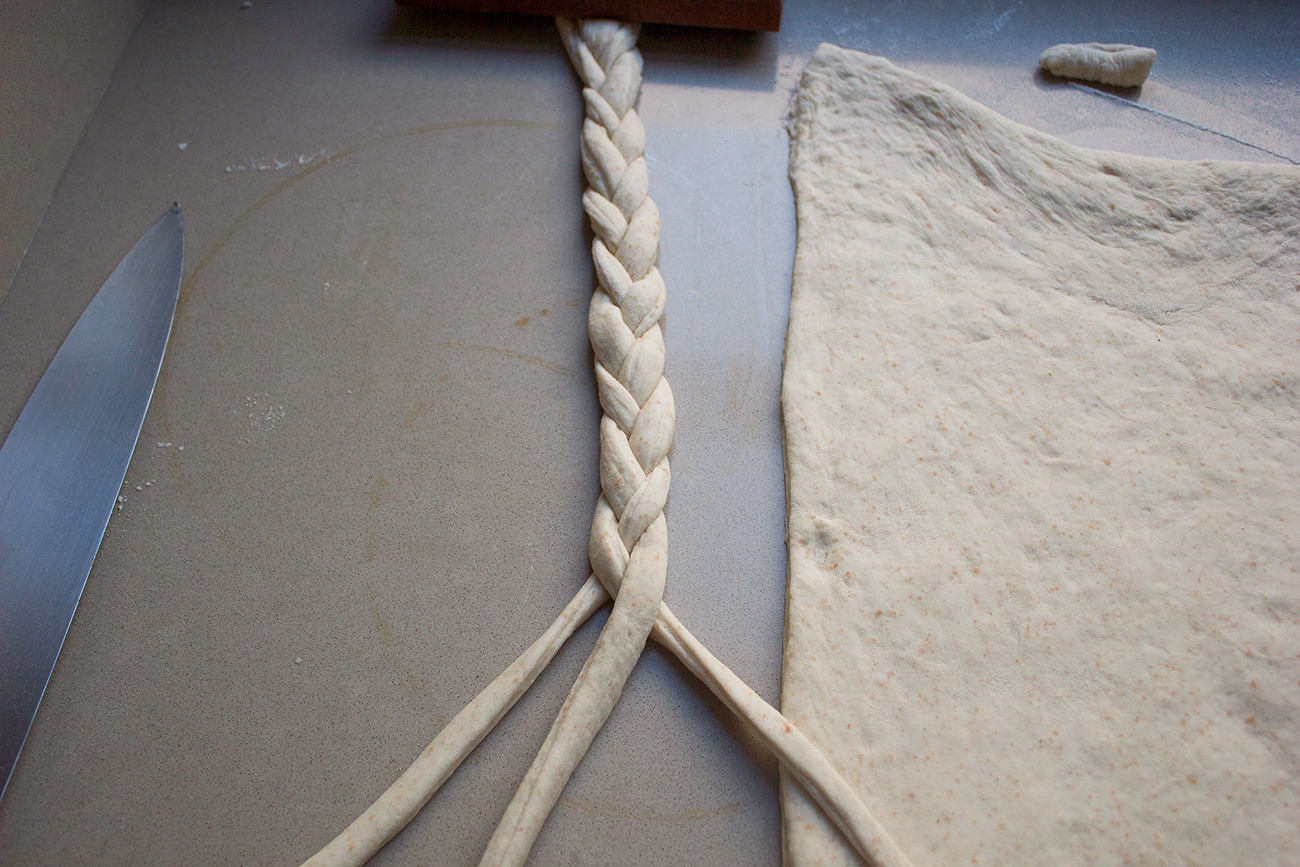 Once it has doubled in size, brush again with egg wash and add the finishing touches, such as sesame seeds. 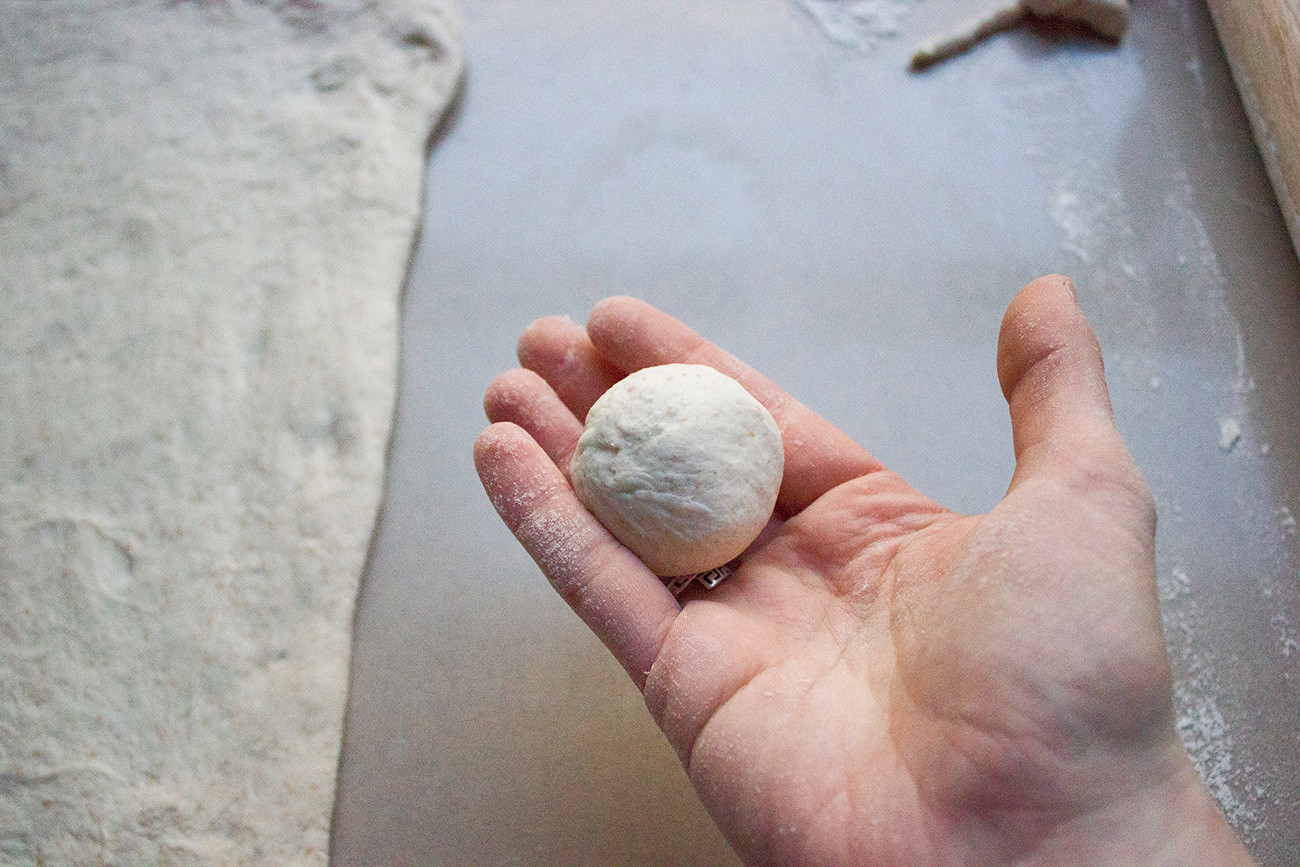 Put your karavay into the oven and pour water (about 70g) on the hot sheet tray that’s on the bottom of the oven. Close the door as soon as possible in order to trap the steam that you need. 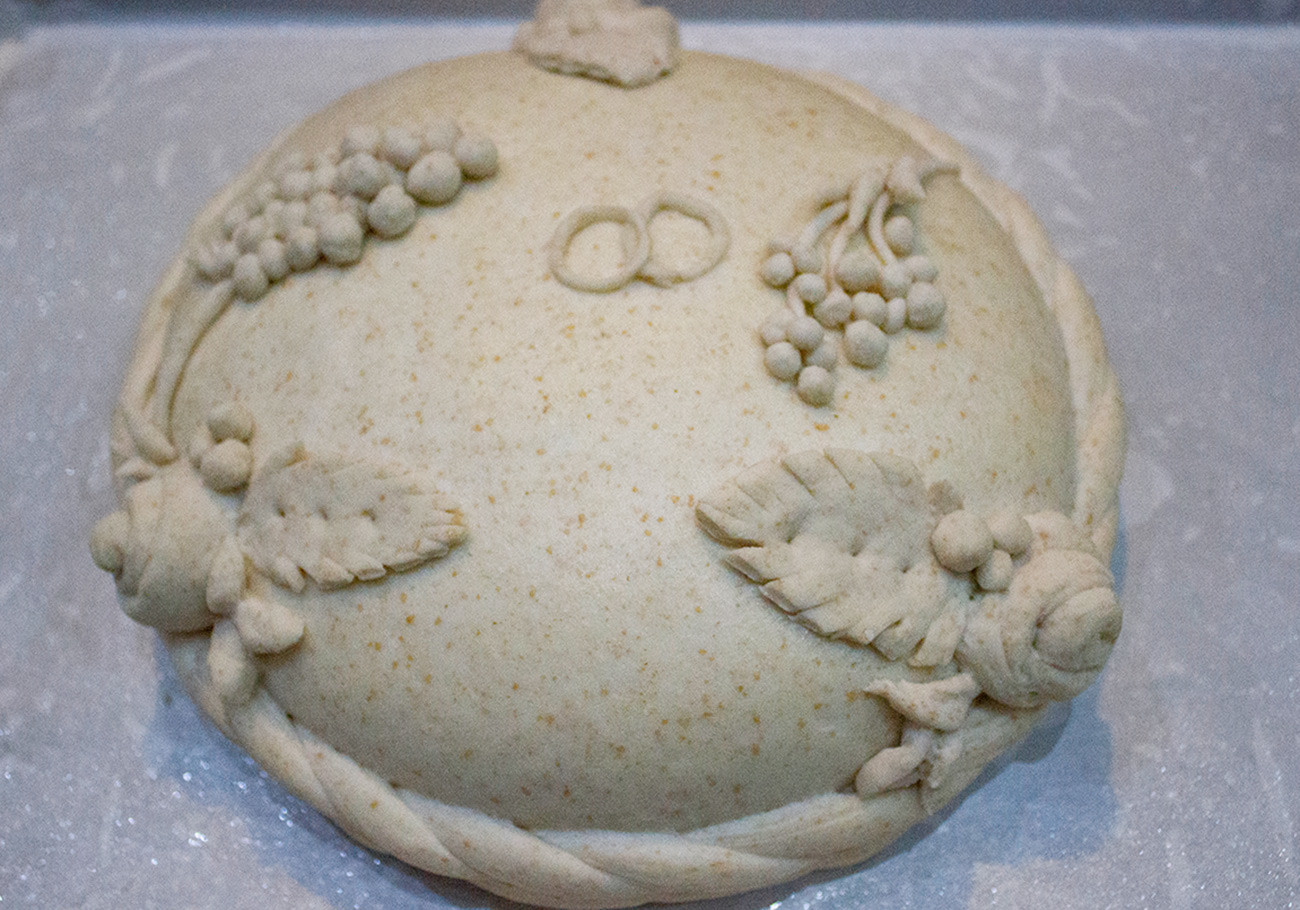 Bake the karavay at 230°C for 10 minutes and then lower the temperature to 200°C, and bake for 45 minutes more. Once the bread is baked let sit for at least 20 minutes before eating. 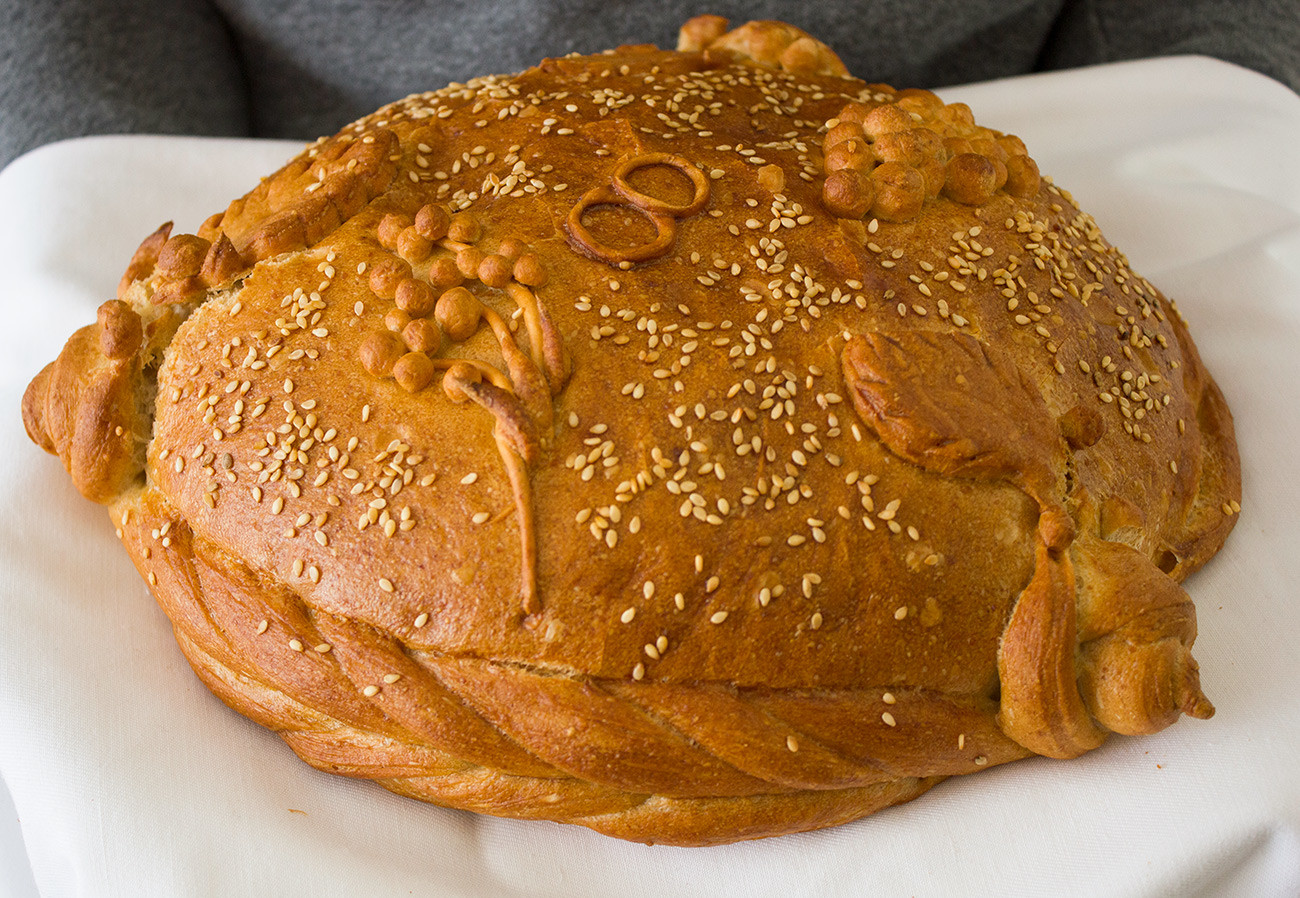 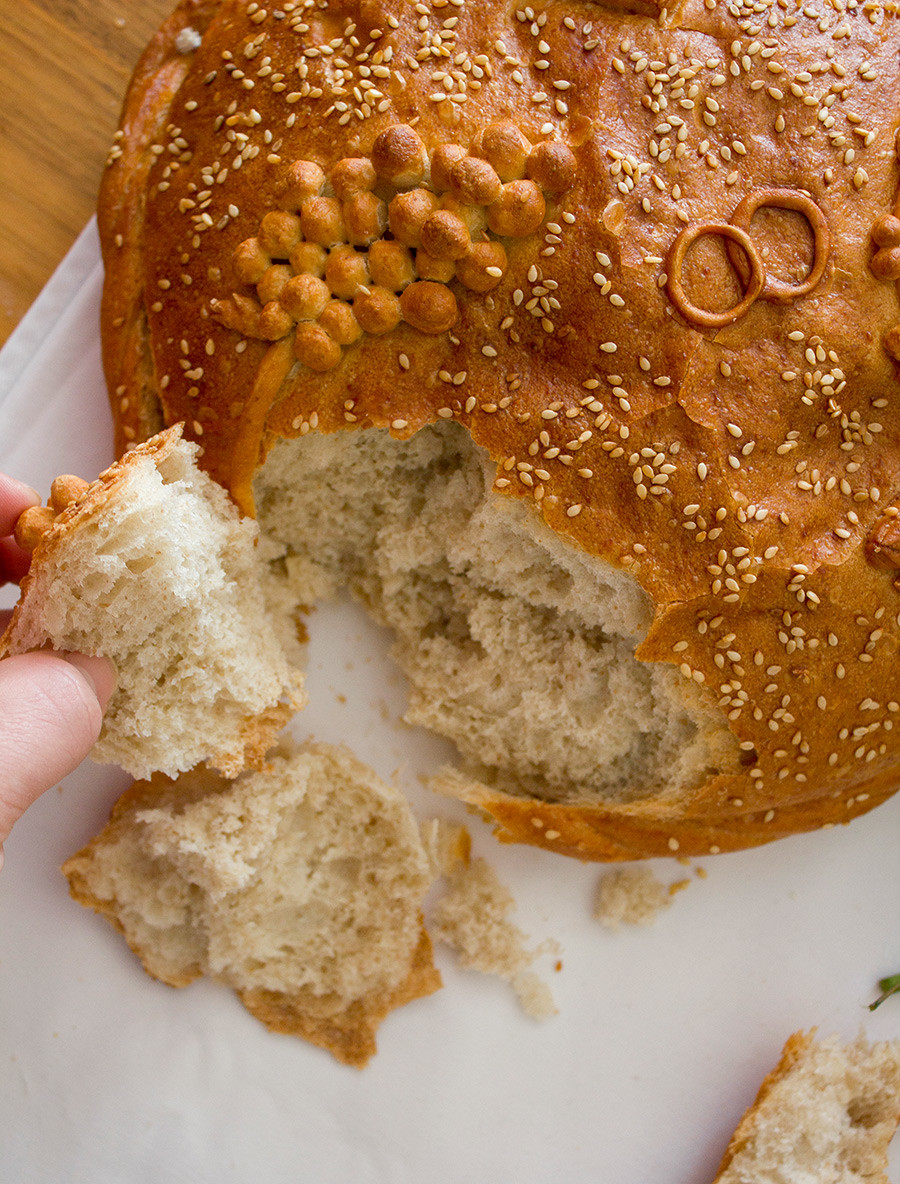 Read more: How to cook legendary Borodinsky bread at home