Blancmange a-la Rus: Step up your pudding game with this almond milk dessert 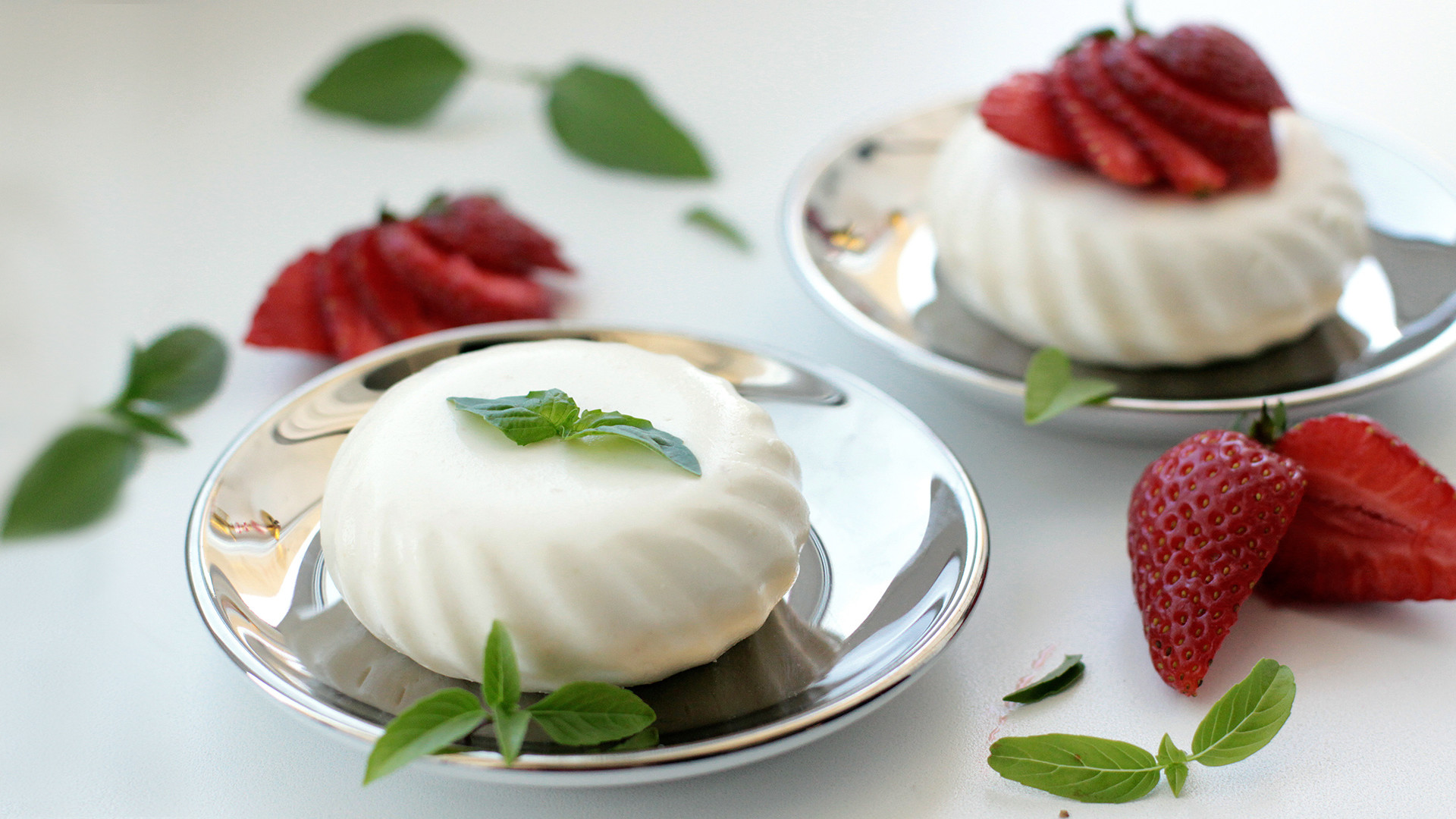 Victoria Drey
How did a traditional French delight become a symbol of fine cuisine, and turned the heads of Russian writers

Many confectioners consider blancmange to be one of the most undeservedly forgotten desserts of all time. In Europe the recipe was loved and common since the Middle Ages. First appearing in France, this pudding made with almond milk soon appeared in most European cuisines. Blancmange found its way even into Russian cuisine in the 18th century in prosperous houses and families, where it became common to hire French cooks and confectioners. This practice truly transformed Russian cuisine and numerous French dishes became truly loved on Russian tables, and blancmange was one of them. The Russian aristocracy  fell for this French dessert so much that in a short period of time blancmange became a symbol of fine dining and good taste. It was even mentioned in many works of literature by notable Russian writers such as Alexander Pushkin and Anton Chekhov. Pushkin was well known not only for his poetry - quite caustic toward the nobles' lifestyle, but also for his love for fine dining. His heroes ate blancmange in verse, while he was mad over it in a real life. However, by now blancmange’s popularity somehow went to nought and on dessert tables blancmange was replaced with panna cotta and some more types of modern puddings and mousses.

The dessert’s name derives from the Old French, blanc mangier, which literally means “white dish”. Traditionally, it had more of a soufflé consistency and was made from cow or almond milk, sugar and, surprise, chicken stock that acted as a natural thickener. Later, it was replaced with gelatin and cornstarch, so blancmange became more sweet, dense and pudding-like. Today, there are literally dozens of blancmange variations based on cream, rice, sour cream and even tvorog (cottage cheese). This particular recipe visibly differs from the original because of the one so-called ‘Russian’ ingredient – sour cream. It gives blancmange a slightly sourish hint that brings the taste to the next level. What’s more, I use not only almond milk but also milled almonds which gives the dessert a very unique grained but still smooth texture unlike any other type of pudding or panna cotta.

1. The most important step is preparing almonds: pour hot water on the nuts and leave for a couple of minutes. Then drain and cover with cold water for another minute or so. Repeat the process twice or thrice until the skin easily removes from each almond. 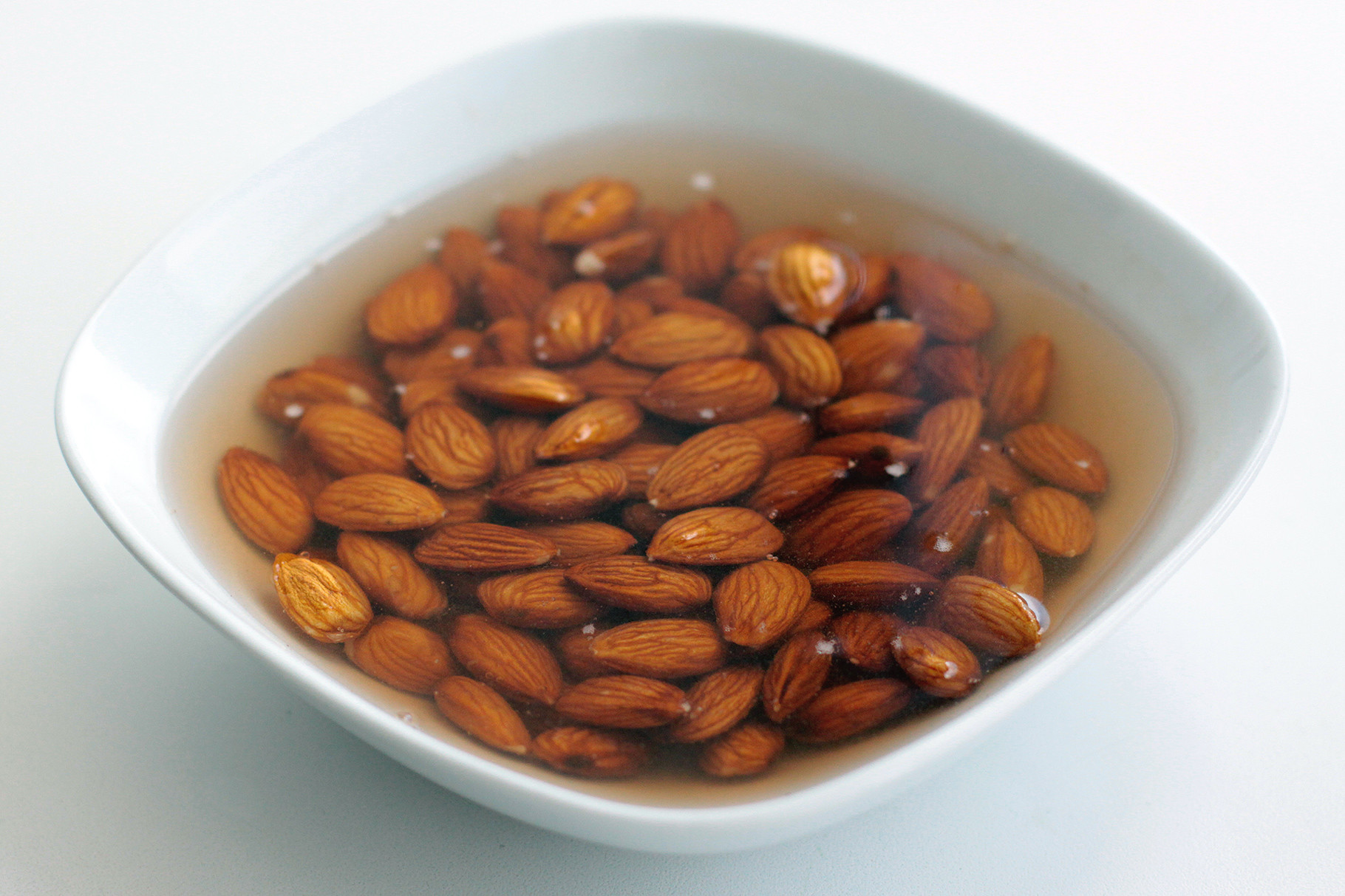 2. Place peeled nuts in a bowl with ice cold water and leave for about an hour until almonds whiten. 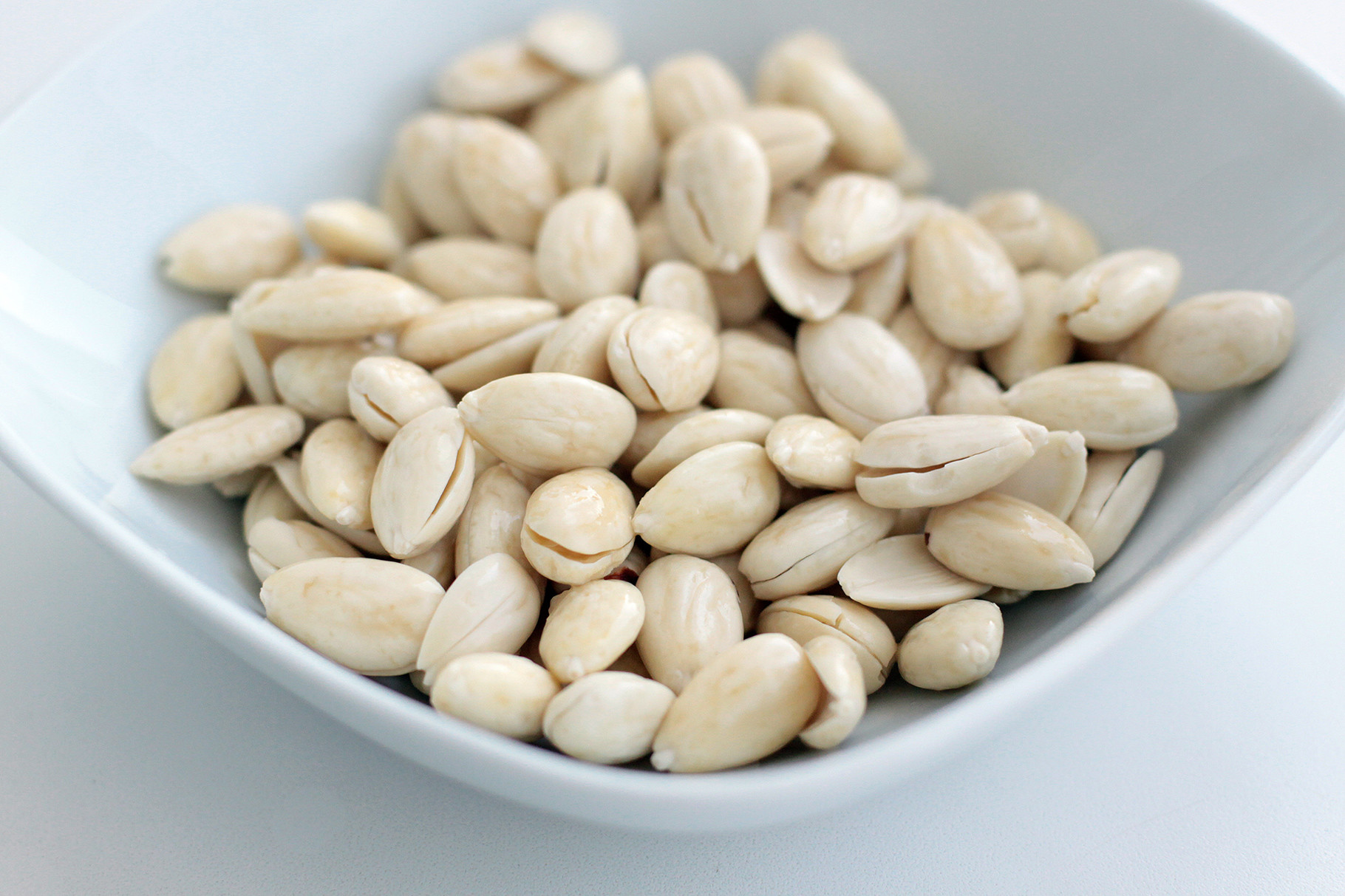 3. Meanwhile, mix gelatin powder with 3 tablespoons of water and leave for 10 minutes to soften and swell. 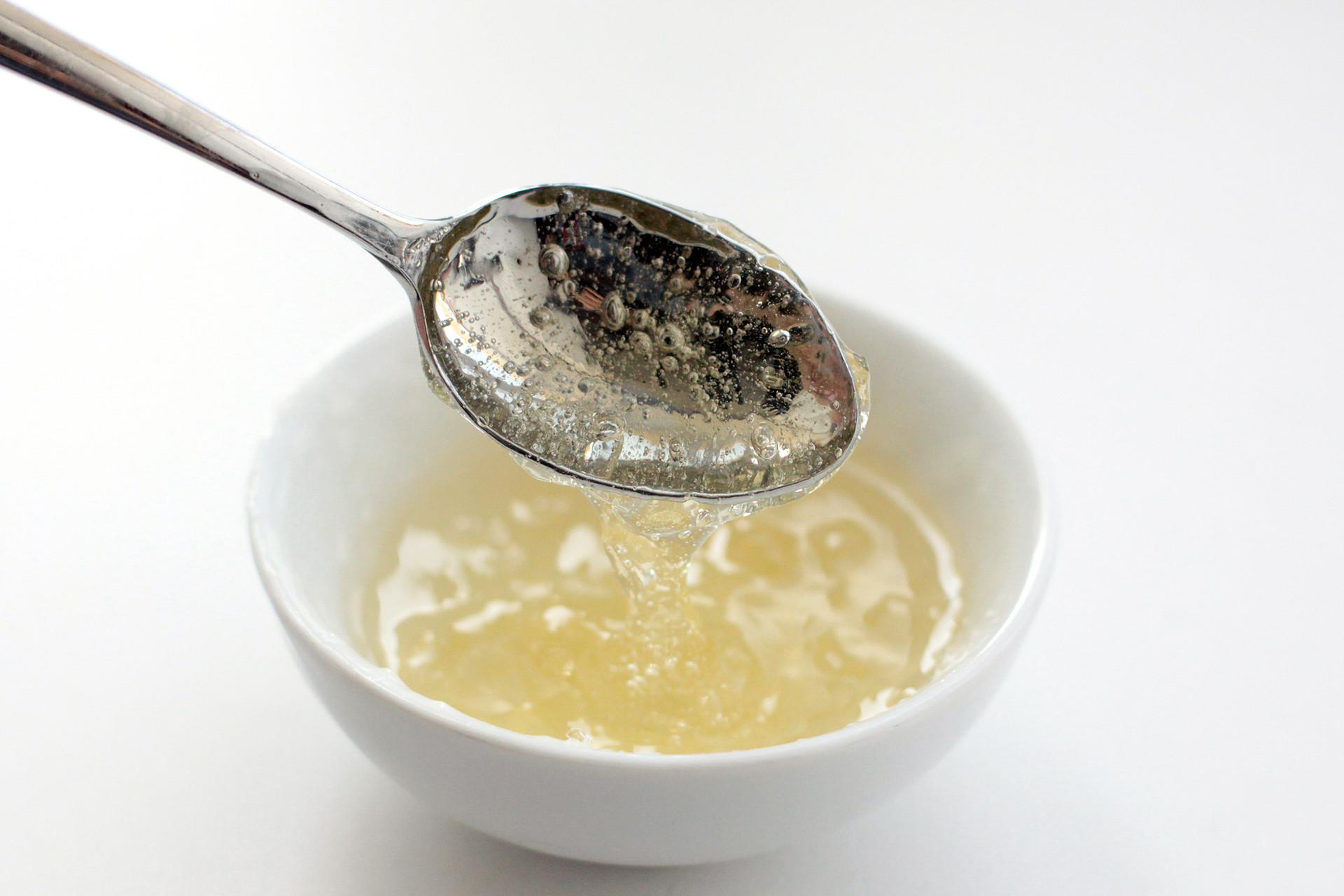 4. Drain the water from nuts and finely grind in a blender – you may also use a mortar and pestle. 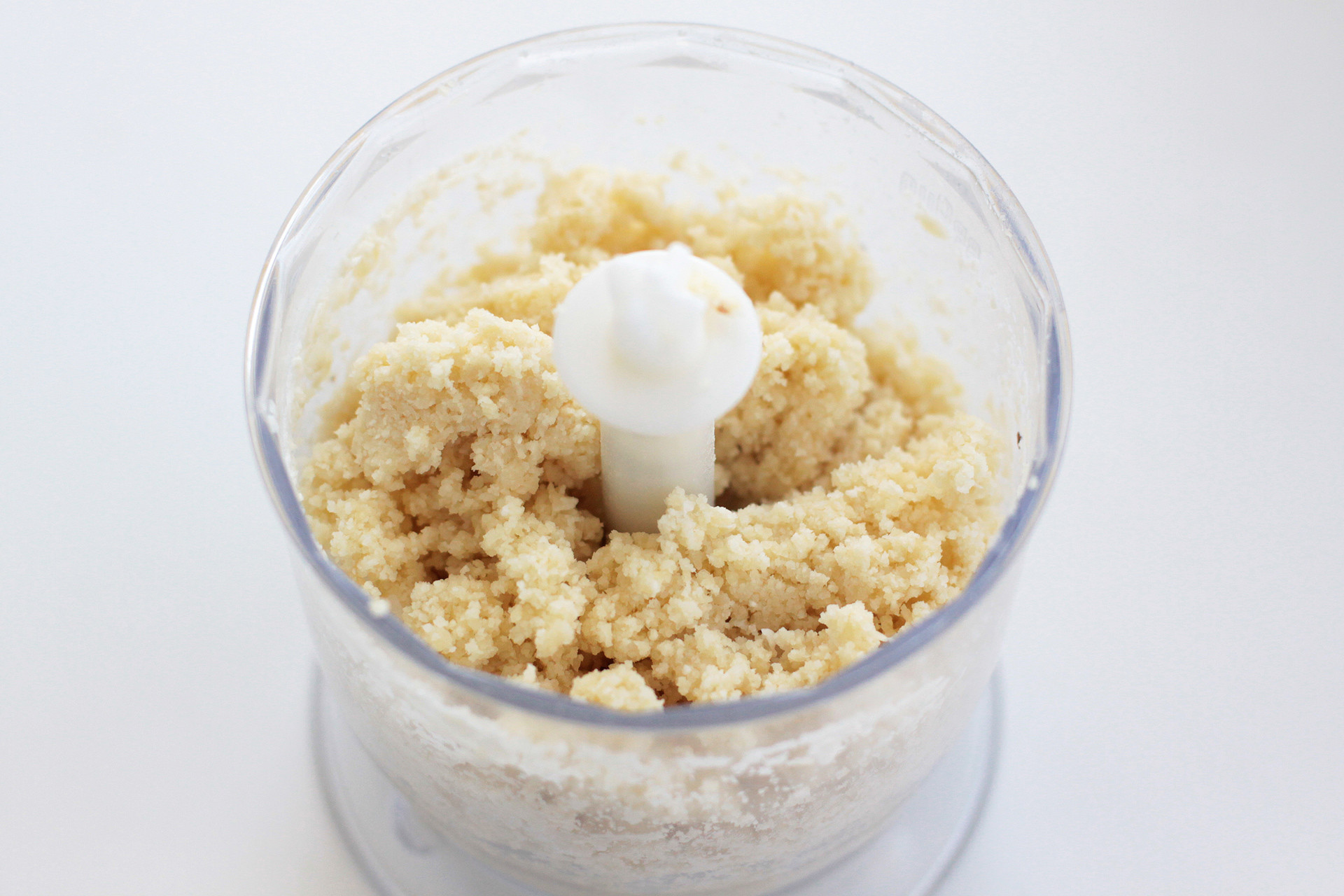 5. Now combine cream with milled almonds, stir until smooth and transfer to a pot. 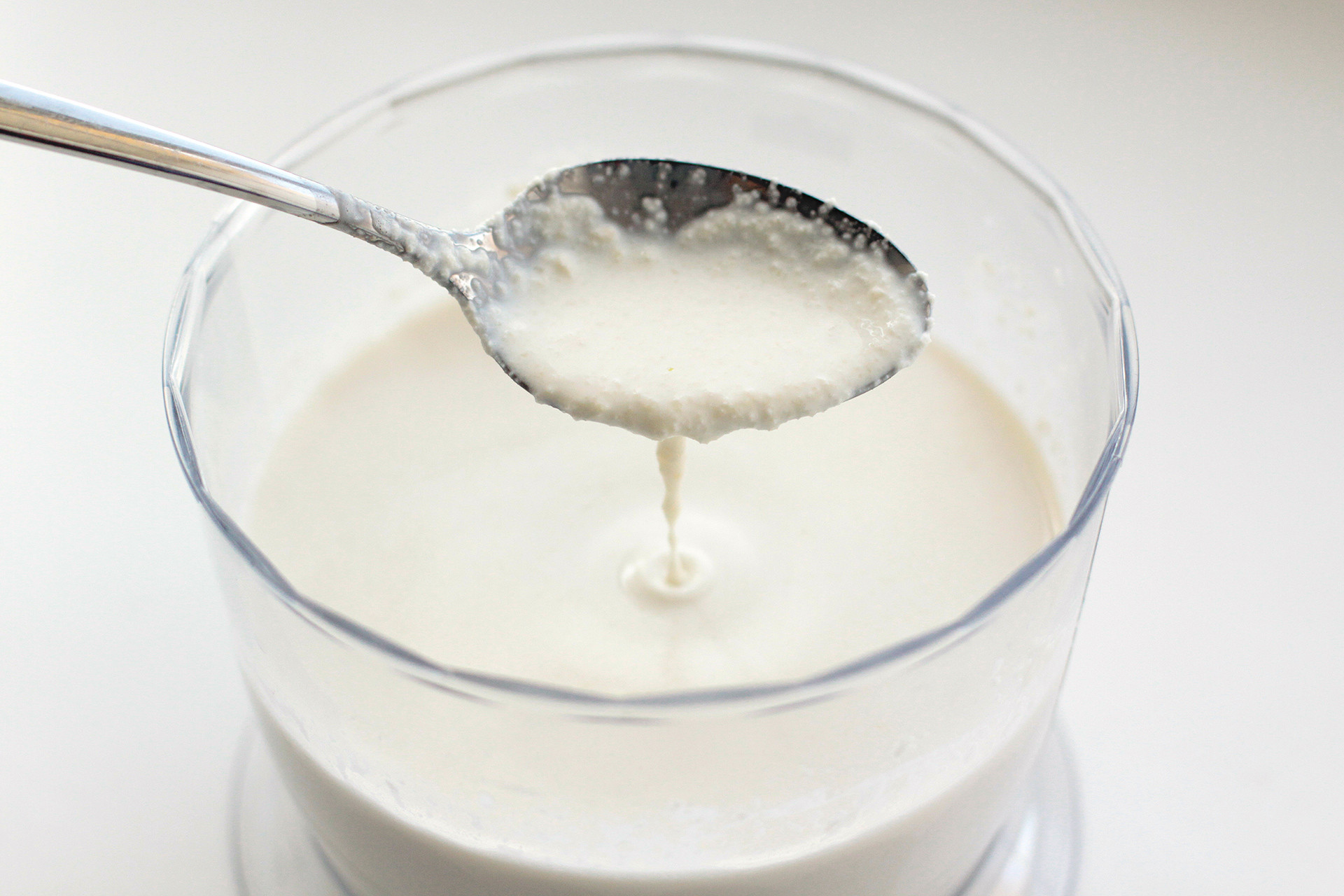 6. Add sugar and swollen gelatin, and heat the mixture: it should get quite hot but not boil. Make sure to constantly stir the liquid so the sugar and gelatin fully dissolve. Remove from the heat and let cool to room temperature. 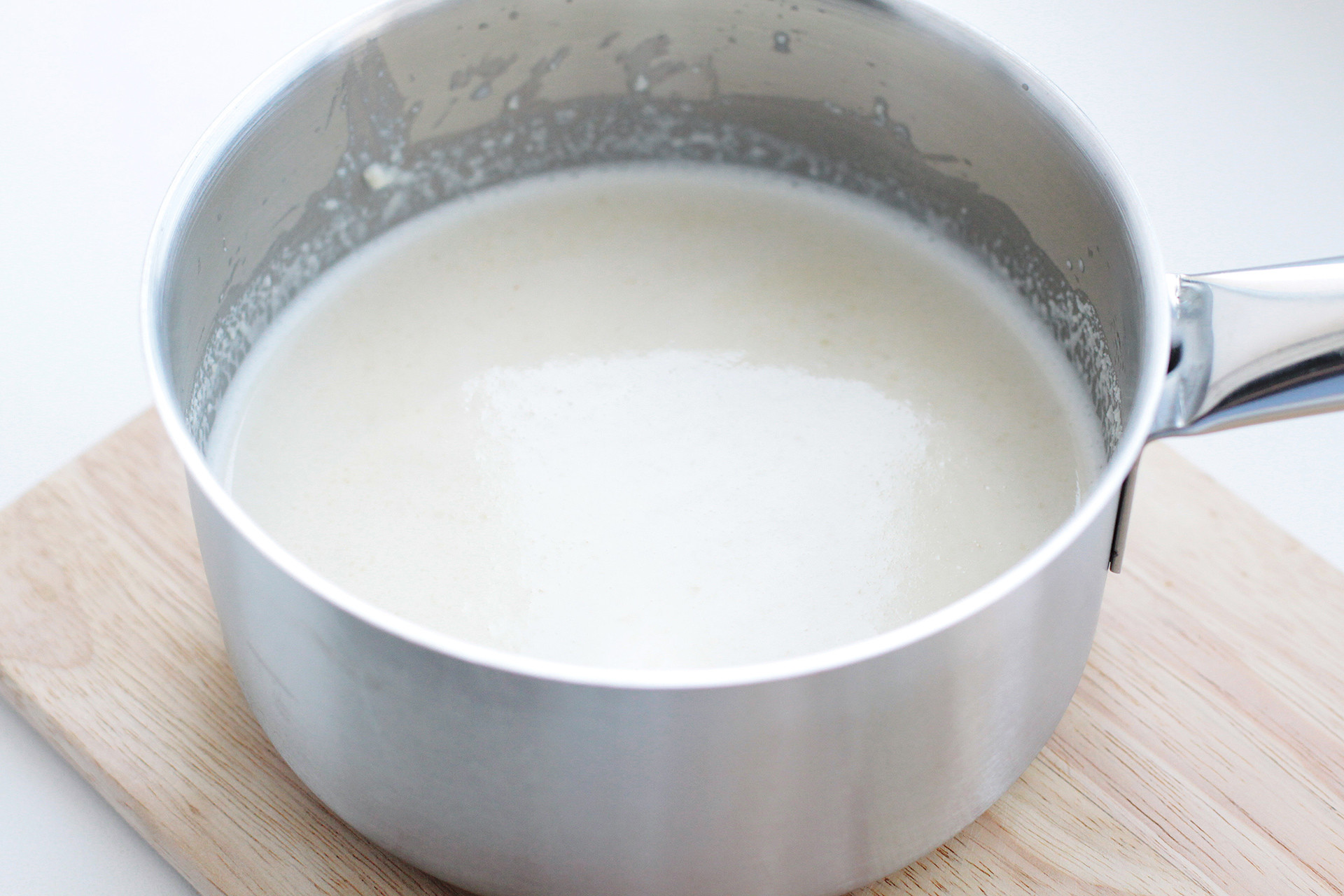 7. Cut fresh strawberries into dice to decorate blancmange. Feel free to use basically any berries or fruits depending on the season. 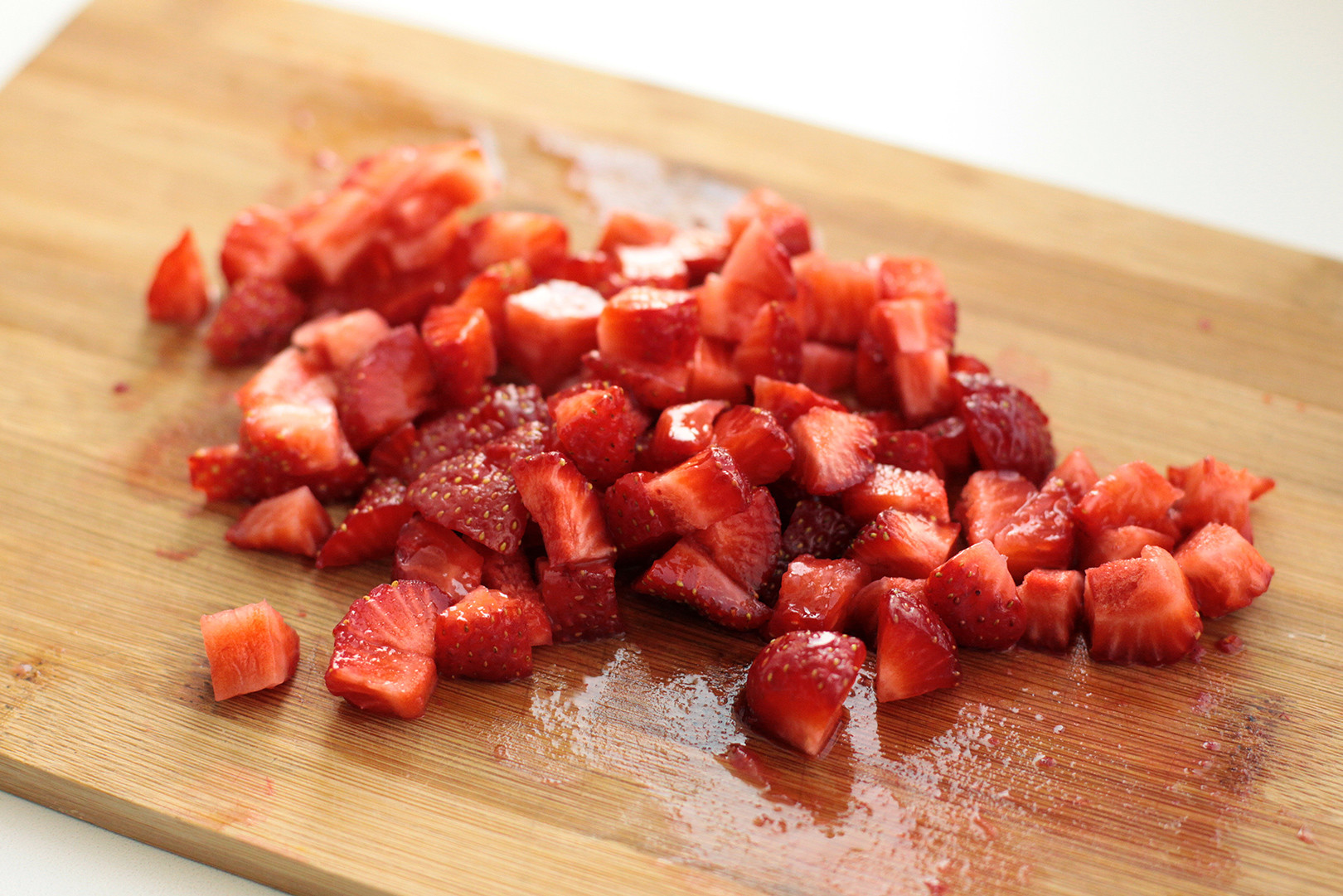 8. When the cream-almond mixture is cooled enough, add sour cream and combine with a hand whisk until smooth. For a creamier taste replace sour cream with the same amount of slightly whipped heavy cream. 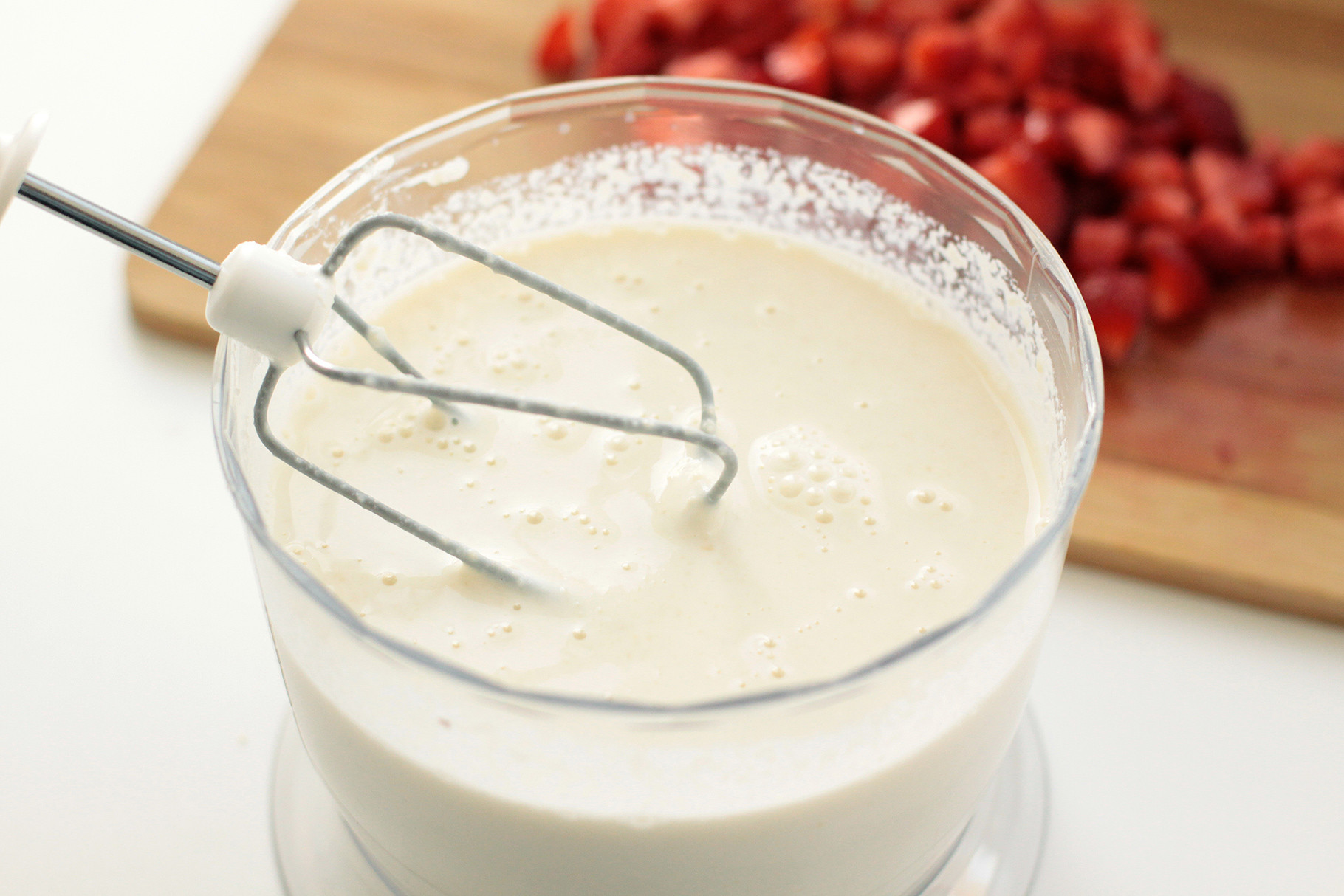 9. All you have to do is fill some silicone forms with liquid blancmange. Add chopped berries on top of each and put in the fridge to set for at least 3 hours. 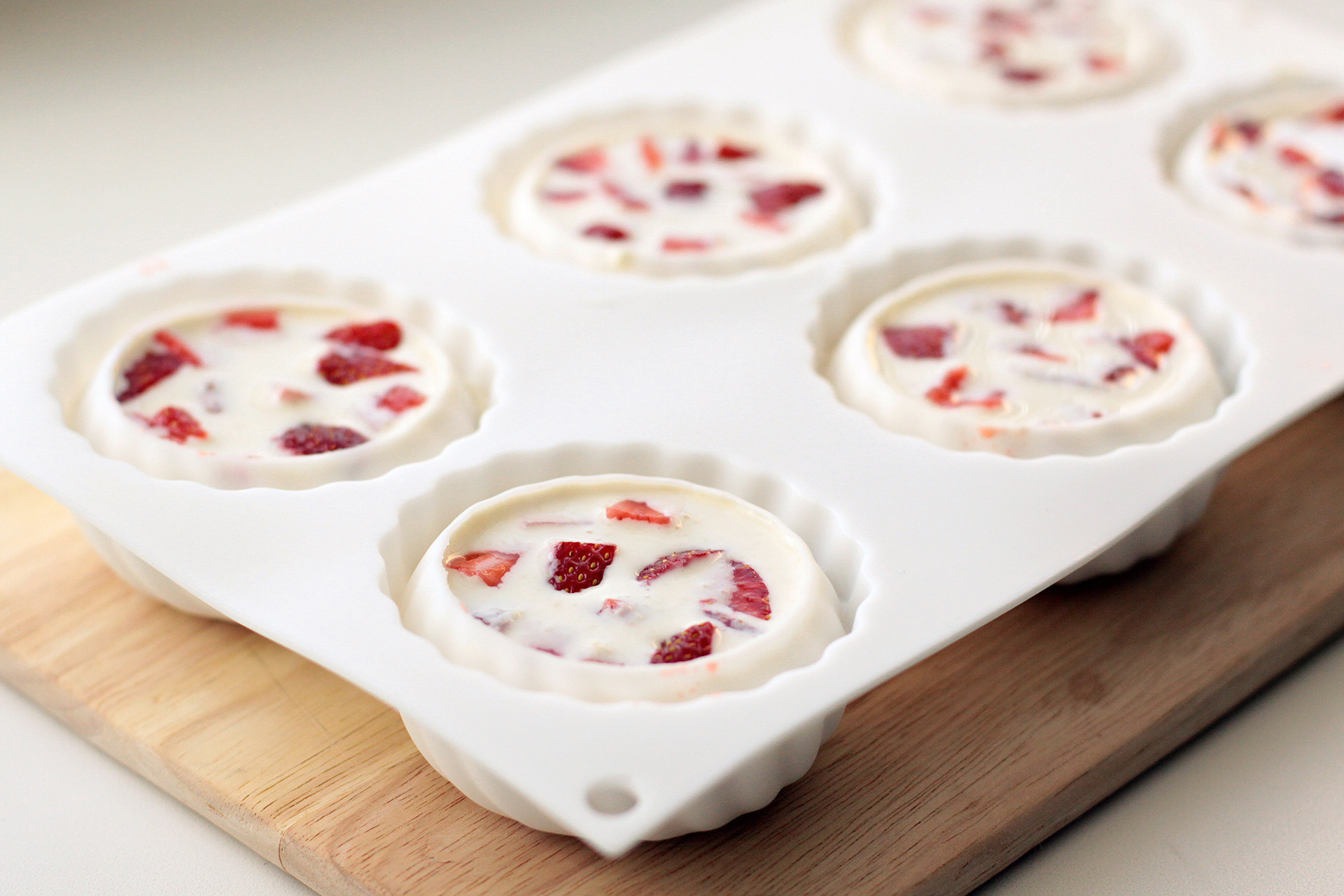 10. Remove each blancmange from the form, decorate with fresh strawberry and mint, and serve with coffee. Priyatnogo appetita! 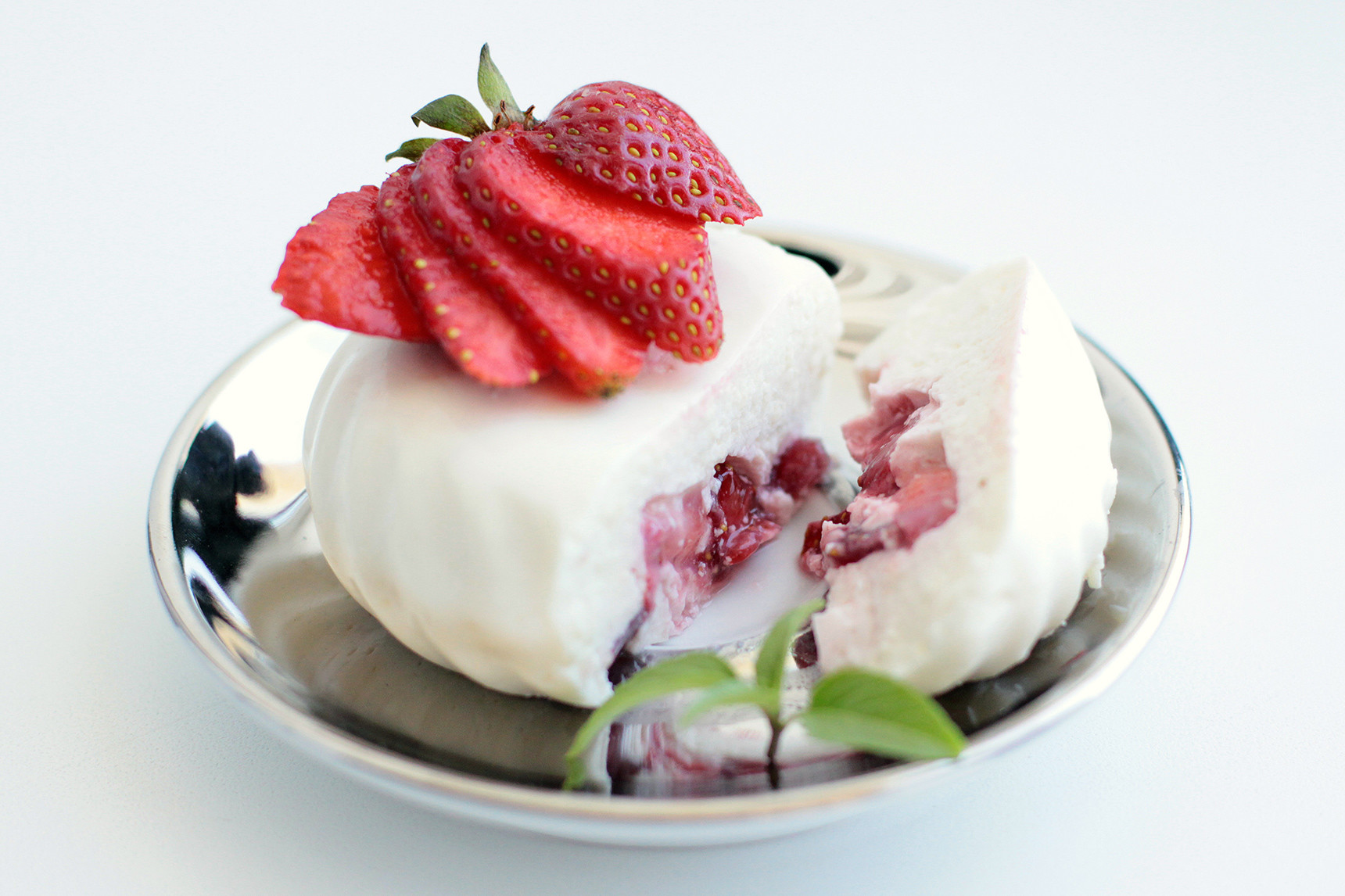 Read more: “Lazy” Napoleon: This delicious dessert will be the delight of your party