Samogon: How Russians make their moonshine 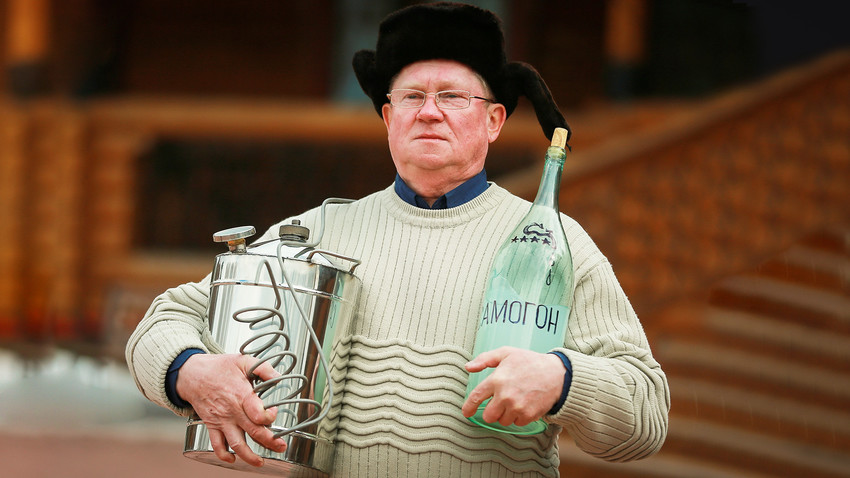 Vladimir Smirnov/TASS
What alcohol do Russians make at home and is it legal?

“These moonshine stills are cheap and easy and, friends, they bring in revenue all year round,” thus begins Leonid Gaidai’s Soviet-era short film Moonshiners with a song. In the USSR, homemade alcohol was outlawed, but many still produced it, especially in the countryside. Why do people still do it today?

How did moonshine take root in Russia? 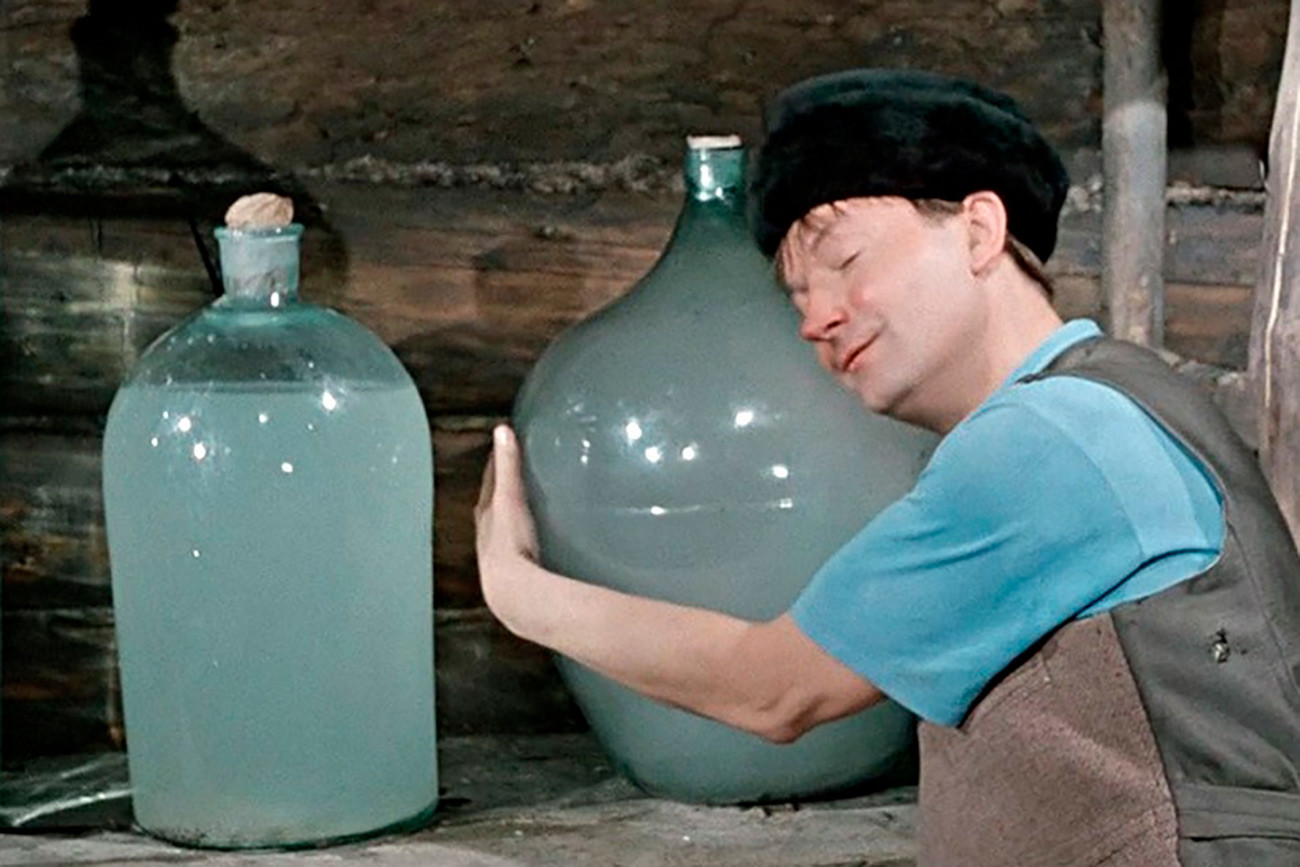 There is no precise data in Russia on the consumption of homemade spirits (known in Russian as samogon, literally “self-distillate”): it is not sold in stores, and very rarely in bars. “We were once treated to [it] in a craft bar,” says Maxim from Moscow. “And a work colleague once brought some apple and pear moonshine.” True, the risk of poisoning is perhaps one reason why some people are put off.

“About ten years ago I was visiting someone, and the hostess had a friend from the village who’d made some,” recalls Daria from Moscow. “It tasted horrible. I had a crazy hangover, there was this hole in my memory. It went only three days later.”

After that incident, Daria quit drinking altogether, although she doesn’t rule out the possibility that it was simply low-quality alcohol. Meanwhile, Yulia from Nizhny Novgorod believes that moonshine is just a matter of taste. She also dislikes such alcohol, but everyone in her family makes it. When asked why, she answers: “It’s a hobby… Plus people do it almost everywhere in the world.”

Indeed they do. In most English-speaking countries it’s known as moonshine, in Ireland poitín, in Hungary palinka, and in Germany Schwarzgebranntes — to name just a tiny few. Under Catherine II, for example, making moonshine was perfectly legal in Russia, but quite expensive, so only nobles could do it. The rest needed a sales license. Villagers in those days drank low-alcohol non-distilled homemade drinks, such as mead and beer. Over time, drinking establishments began to appear offering homemade alcohol, and peasants learned how to build their own moonshine stills and make strong alcohol at home.

Until the very beginning of the 20th century, the state tried to regulate only the sale of moonshine, introducing excise duties and a monopoly on trade, while paying scant attention to the actual moonshiners themselves. Only when alcoholism became a major problem were steps taken to ban moonshine. Although some historians believe that the real reason was due to lost revenue from legal alcohol. 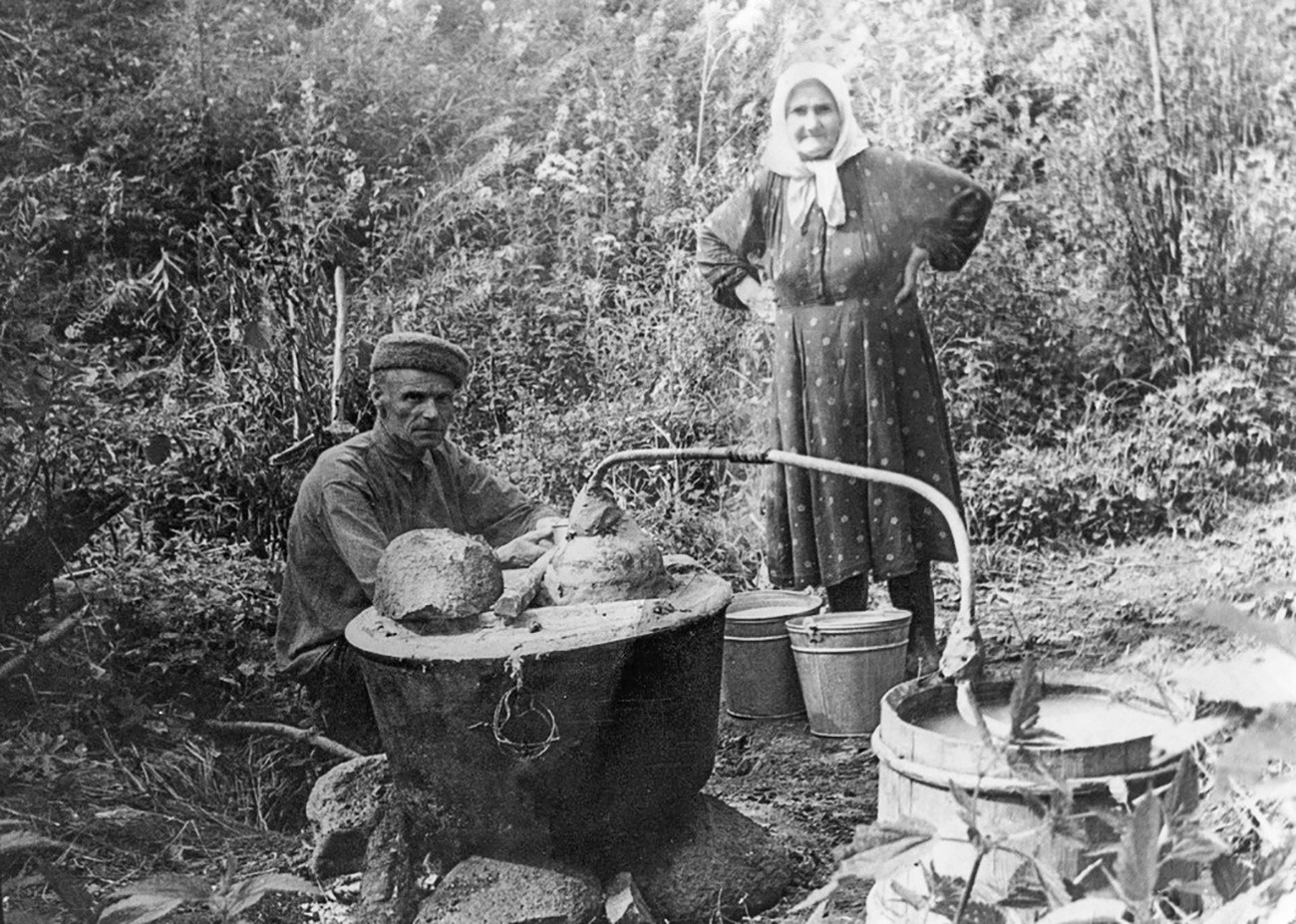 The first "dry law" was introduced by Tsar Nicholas II during WWI — it was decreed that alcohol could only be bought in restaurants. In villages, however, its introduction caused moonshining to flourish. And in far-flung places beyond the Urals and the arm of the law, everyone was at it. What’s more, illicit village-made alcohol became a very lucrative activity for smugglers.

On coming to power in 1917, the Bolsheviks prolonged the tsarist ban. The punishment for moonshining was strict: several years of camp labor with confiscation of property. Special squads were sent to terminate illegal operations around the country. The Soviet years saw several anti-alcohol campaigns of varying degrees of severity, during which vodka was either totally banned or partially restricted. But either way, all efforts to break the moonshine “industry” failed; it became a kind of anti-regime protest.

In the 1960-70s, when many inexpensive strong drinks like vermouth and port appeared on sale, moonshine became less prevalent. But in the early 1980s, alcohol consumption rocketed: one in three men nationwide was a drinker, and the last, again unsuccessful Soviet “dry law” was introduced in 1985. Alcohol became scarce, which immediately prompted a new wave of moonshining. “I was little, but I remember that my grandmother made moonshine at home, but hid it from the neighbors for fear that they would snitch on her,” says Yulia. “To conceal the smell, she burned bread crusts.” 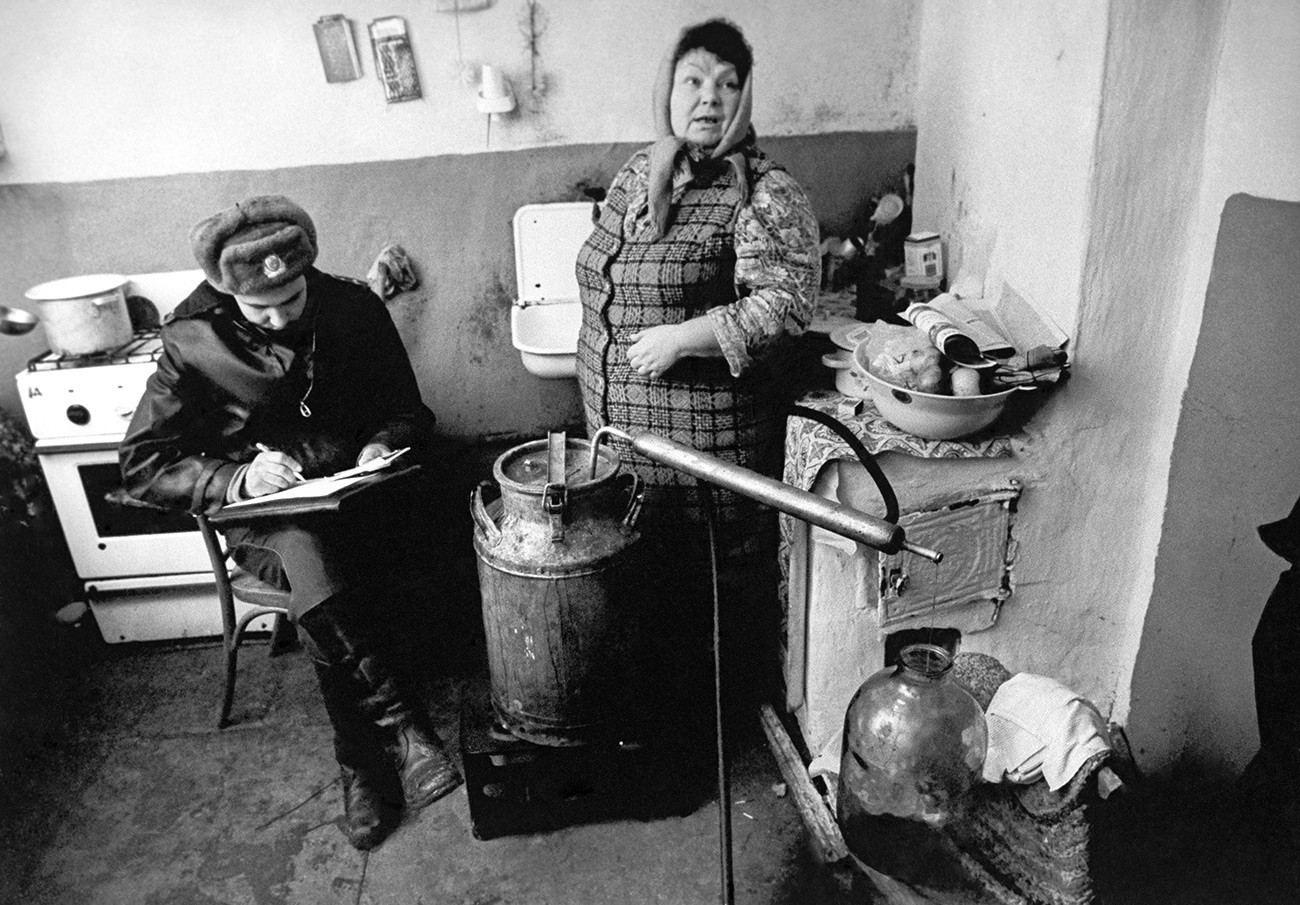 After the collapse of the USSR, when cheap counterfeit alcohol poured (quite literally) into the market, many people began buying moonshine from friends in the village simply to avoid getting poisoned. These days, making moonshine in Russia is legal, but only for personal consumption, not for sale. Stores, for their part, now sell moonshine stills for every taste. As for Yulia, it is her mother who is carrying on the family business. “She and half her friends are mad about making moonshine.”

What is today’s moonshine made of? 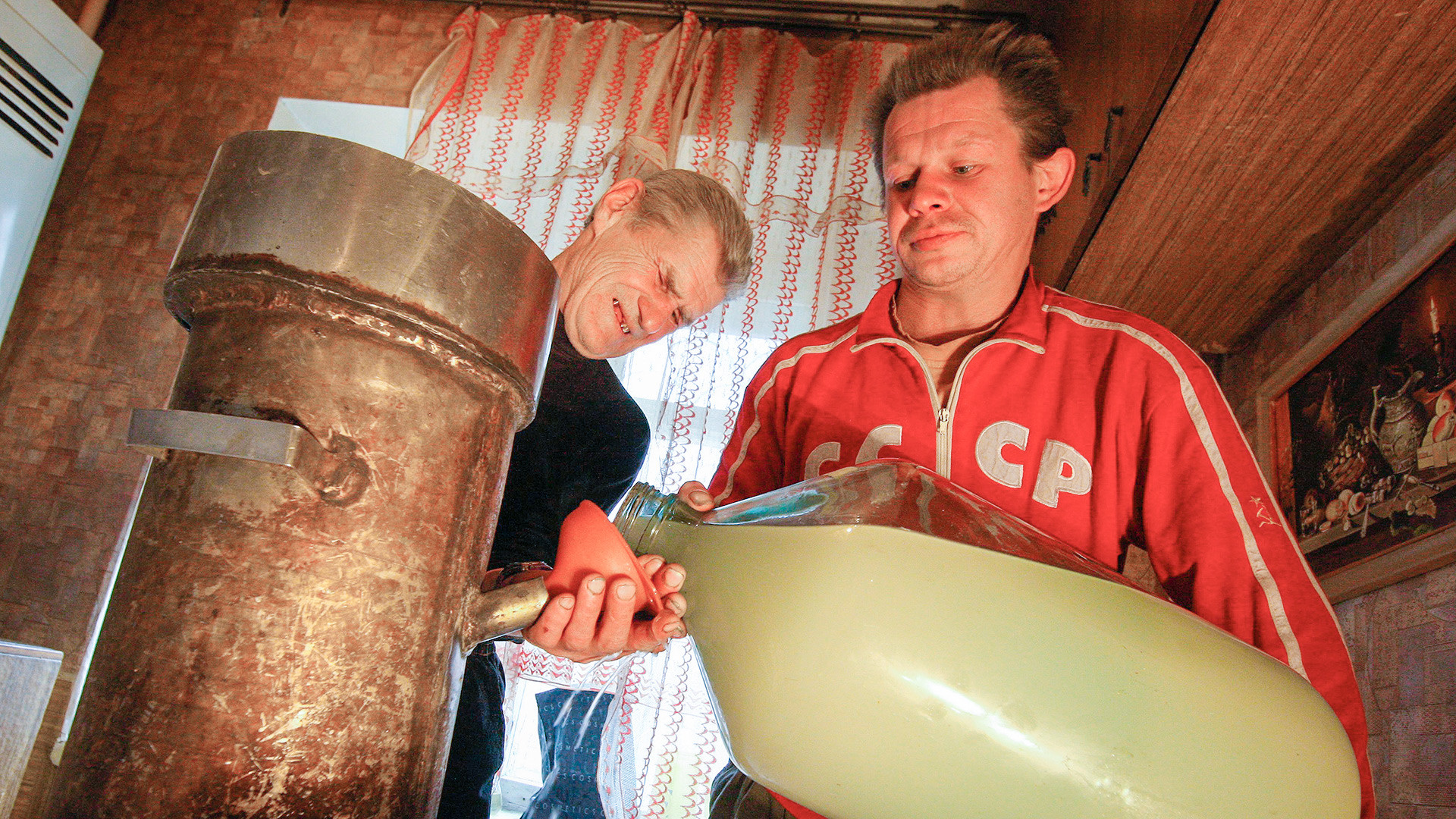 To begin with, moonshiners make mash (usually from sugar, water, and yeast), which is left to ferment for 1-2 weeks and then distilled in a still to extract the alcohol. Moonshine has two parts that are not suitable for consumption, known as the “head” and “tail” — the first and last parts of the product. They contain methyl alcohol and fusel oils, i.e. pure poison (although even these substances have their devotees). Only the “body” is drinkable. The strength of moonshine is usually around 40-50%. Moonshiners recommend not only severing the “head” and “tail” to make it safe, but also distilling twice.

“Good moonshine smells nice, you don’t have to down it right away,” says Maxim. “I’ve drunk moonshine many times, both good and bad.”

In general, moonshine is obtained from any foodstuffs that contain sugar or starch. This can be barley, millet, wheat, potato, fruit, or beetroot. “In Soviet times it was made from old jam and compote [stewed fruit] with added yeast and sugar. It was left to stand for a couple of weeks and produced a really strong smell,” Yulia recollects.

“The best moonshine is generally got from ordinary sugar, because there’s no extraneous taste and can be infused with anything.” 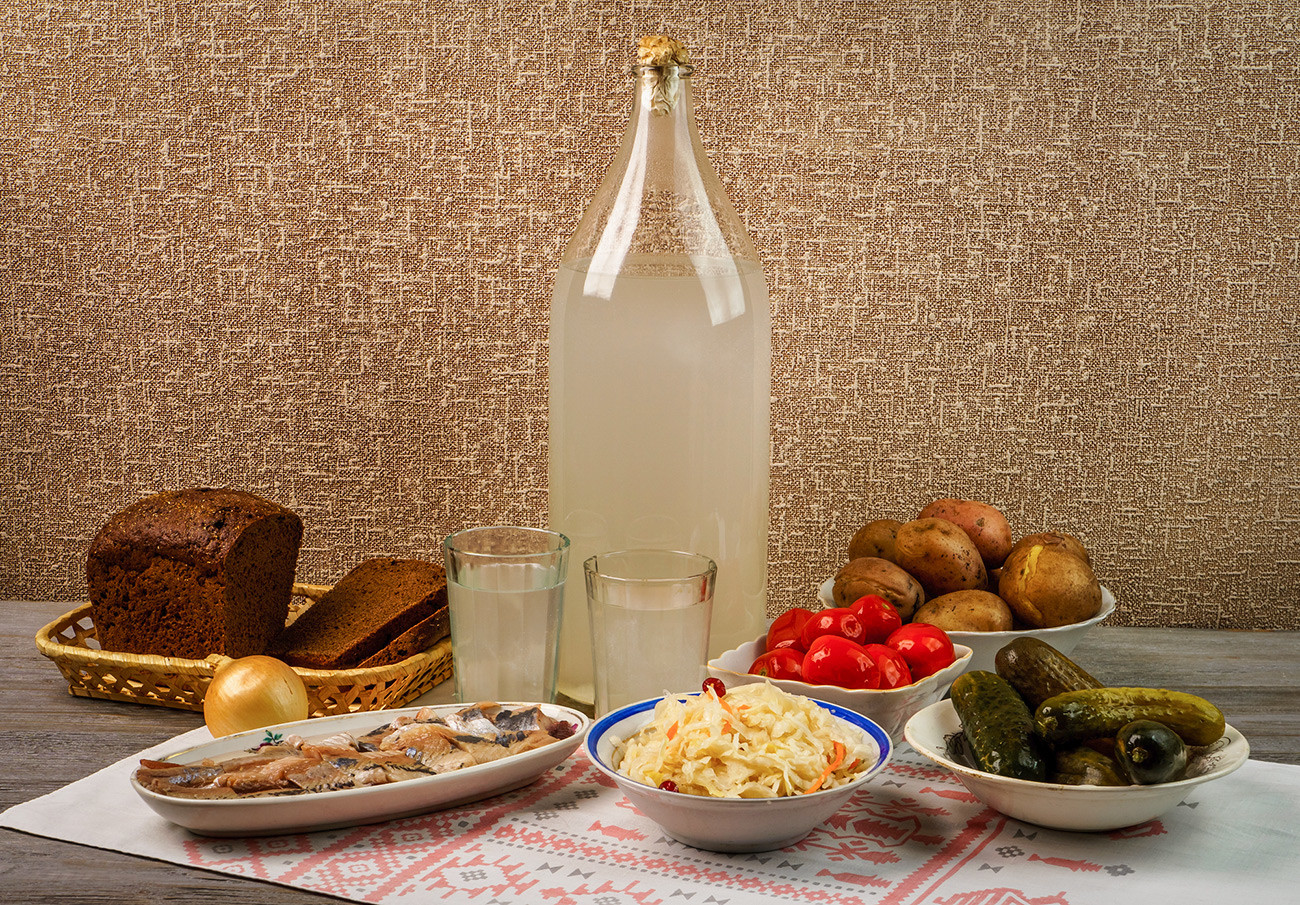 According to our interviewees, pure moonshine has a very distinct smell and taste, so after the distillation process many like to infuse it with various herbs and fruits. The most popular spices in Russia are a mixture of saffron with rosemary (for extra fragrance without changing the taste), cardamom with nutmeg (for a spicy taste), and lemon peel with bay leaves (for a citrus flavor). Interesting colors are obtained by infusing with tarragon (green) and barberries (burgundy).

Moonshiners admit that for them the process is just a hobby, not a business. “She loves the distillation process itself. In some way it’s like alchemy,” says Yulia about her mother.