This Prague cake can’t be found in Czech cuisine (RECIPE) 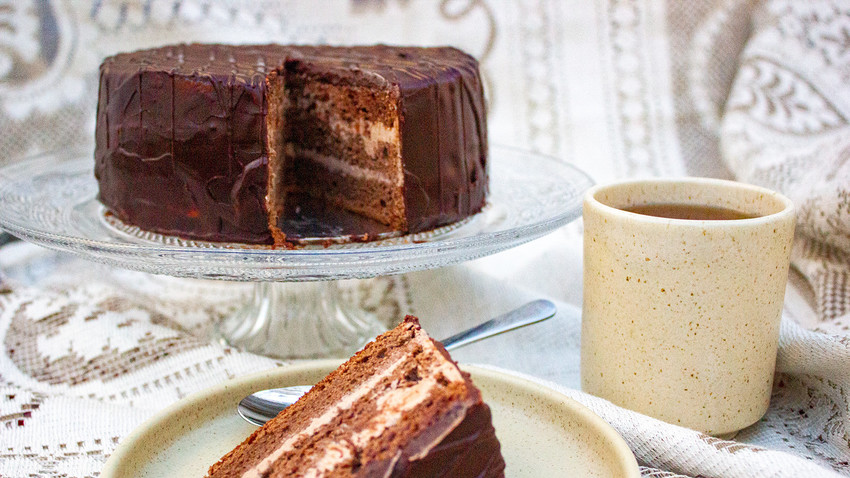 Vasilisa Malinka
In Soviet times, people stood in long lines for “Prague cake,” even though this confectionary masterpiece was expensive. To get this cake for a holiday celebration was always a great achievement. Give it a shot and try to make it yourself!

It is widely believed that the original Prague cake recipe was developed in the Czech Republic’s capital. In fact, however, there is no such cake in Czech cuisine. Here’s the real story: it was created by Vladimir Guralnik, the head pastry chef of the Moscow restaurant “Prague.”He also created more than 30 recipes of Soviet cakes including the legendary “Bird's milk.”

Prague cake is sometimes called the Russian version of the legendary Viennese “Sacher cake.” Yes, they both have chocolate sponges and apricot jam, but the assembly is very different and most importantly, the Prague cake recipe includes chocolate cream and doesn’t use any liquor. Chef Guralnik recalls that the development of this cake was gradual, bit-by-bit and now today it is a veteran of the Russian confectionary industry. In 2020, Prague cake turns 65 years old! 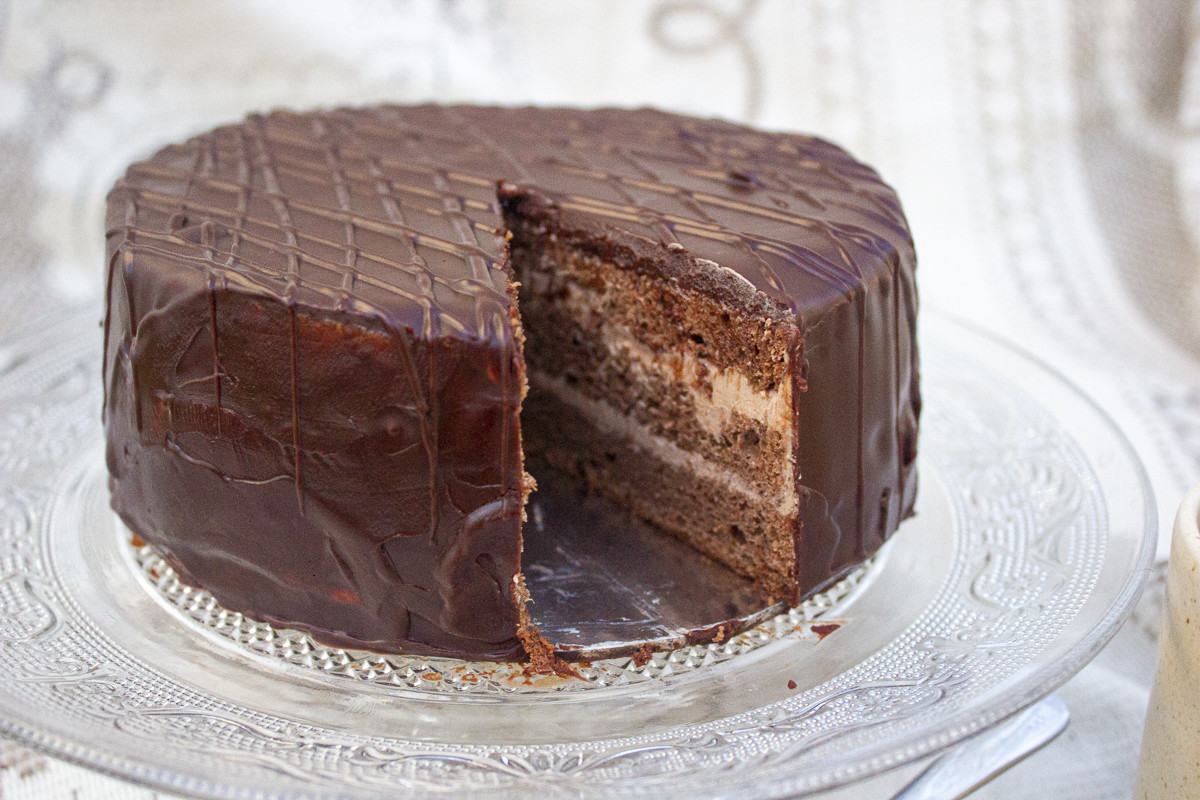 Many housewives have tried to discover the secrets of the original recipe and recreate Prague cake at home. In Soviet times, this cake was not patented because patents weren’t granted to culinary recipes. However, it was issued a standard according to GOST, which was unknown until recent years. Hence, there are  many different variations, but nothing beats the original classic recipe. 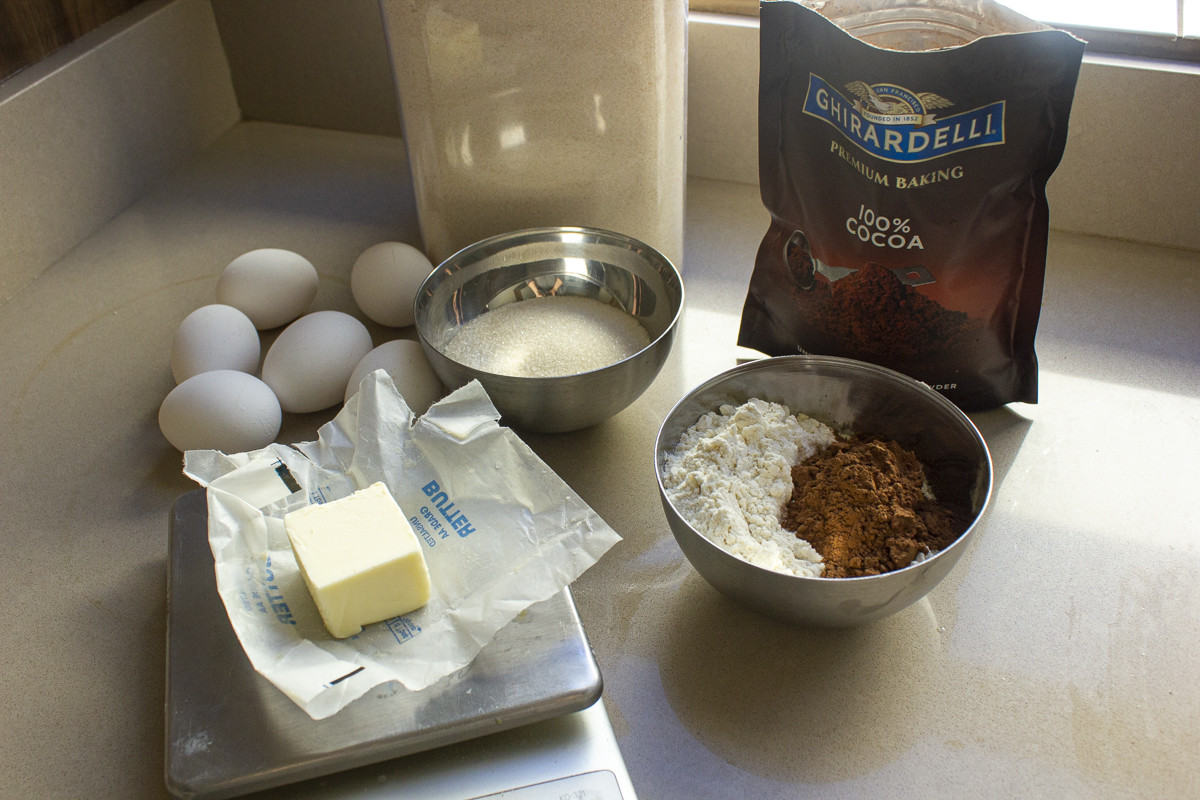 1. Heat your oven to 190°C. Prepare your round mold by greasing it and sprinkling it with flour.

2. Melt the butter and bring it to room temperature.

3. Sift together your flour, cocoa powder and salt. 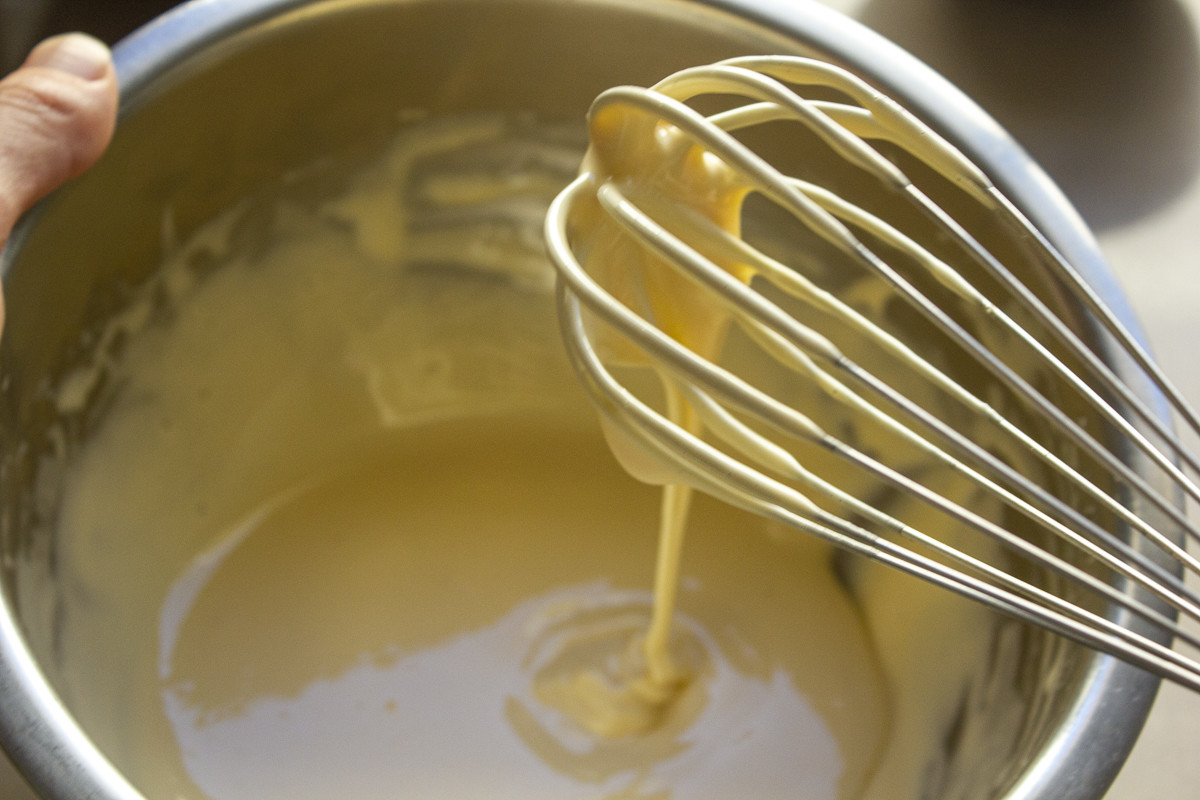 4. Separate the egg whites from the egg yolks.

5. In a stand mixer bowl whisk your egg whites with half of your sugar. You’ll know they’re ready when you can turn the bowl upside down without the whites falling out.

6. In the meantime, whisk the egg yolks with the rest of the sugar, until the mixture becomes thick and lightens in color. 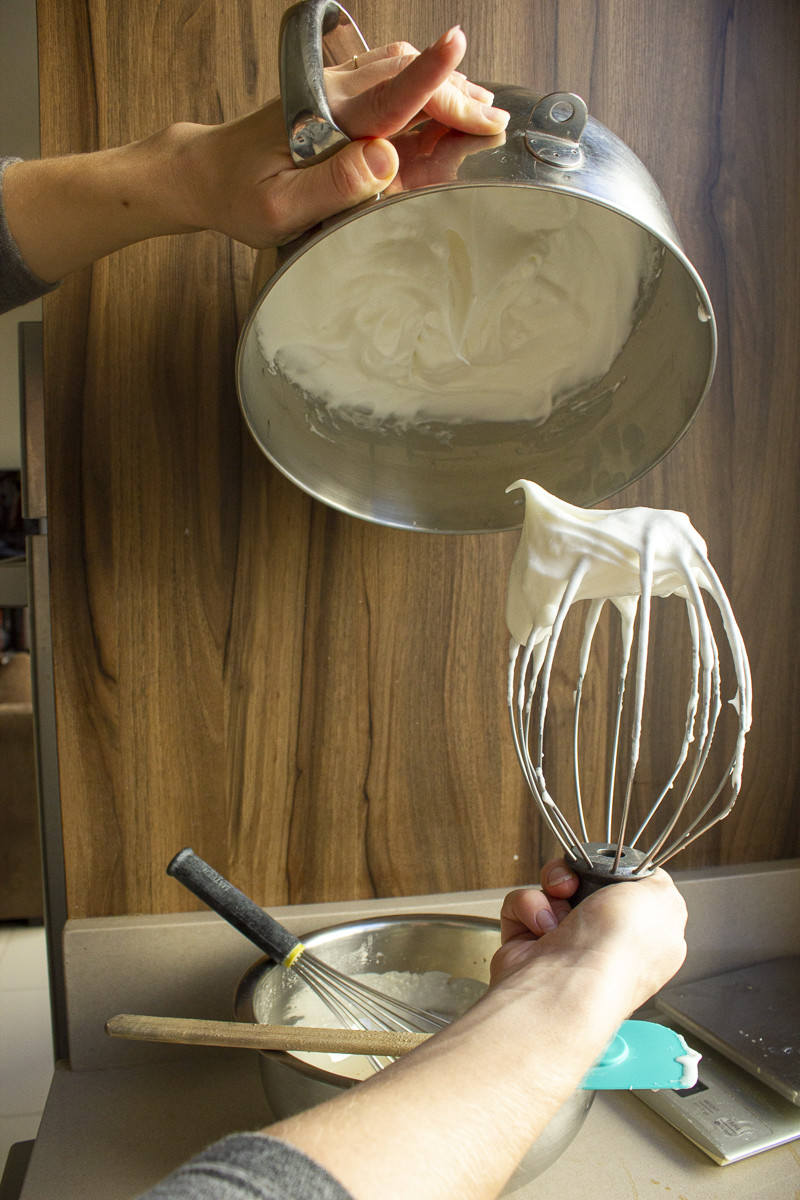 7. Mix the egg whites with the yolks. Take a small part of that mixture and place the melted butter in it. Now, mix it back in the egg mixture. 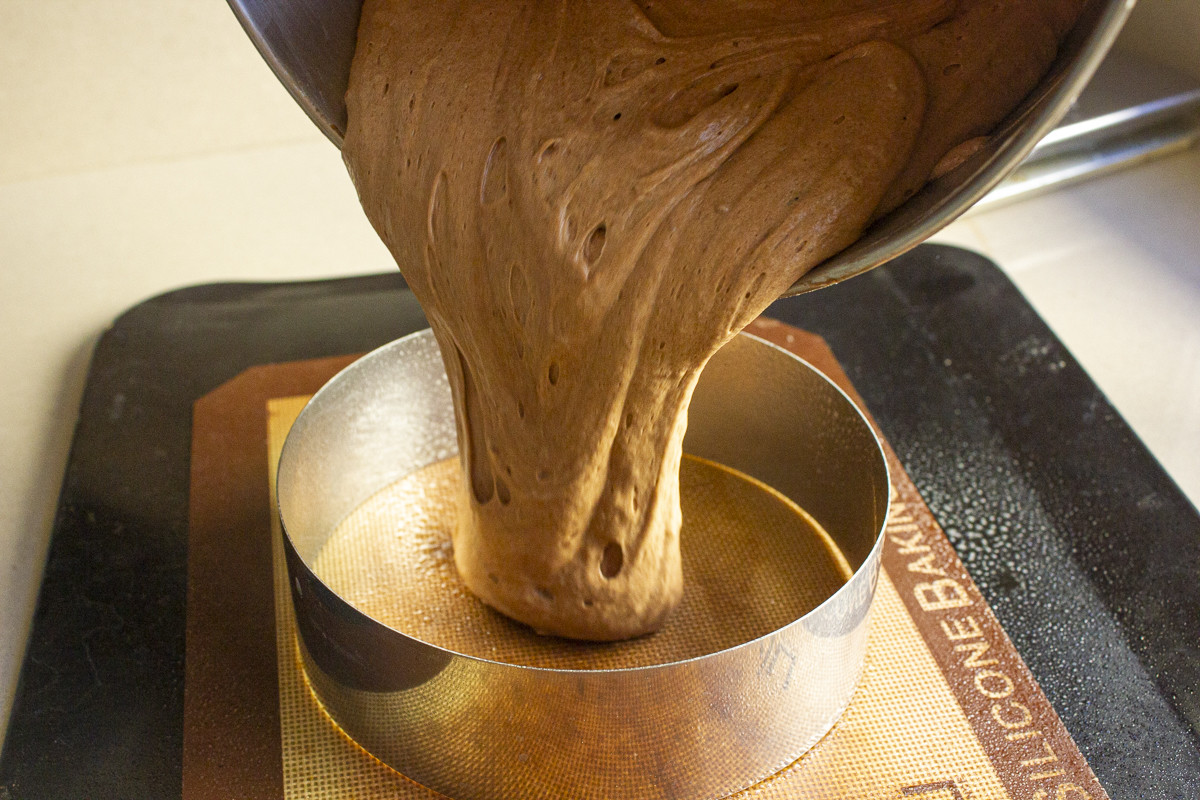 8. Carefully fold the dry ingredients into the egg mixture until it’s homogenous. Pour the batter in your prepared mold and bake for 30-35 minutes. 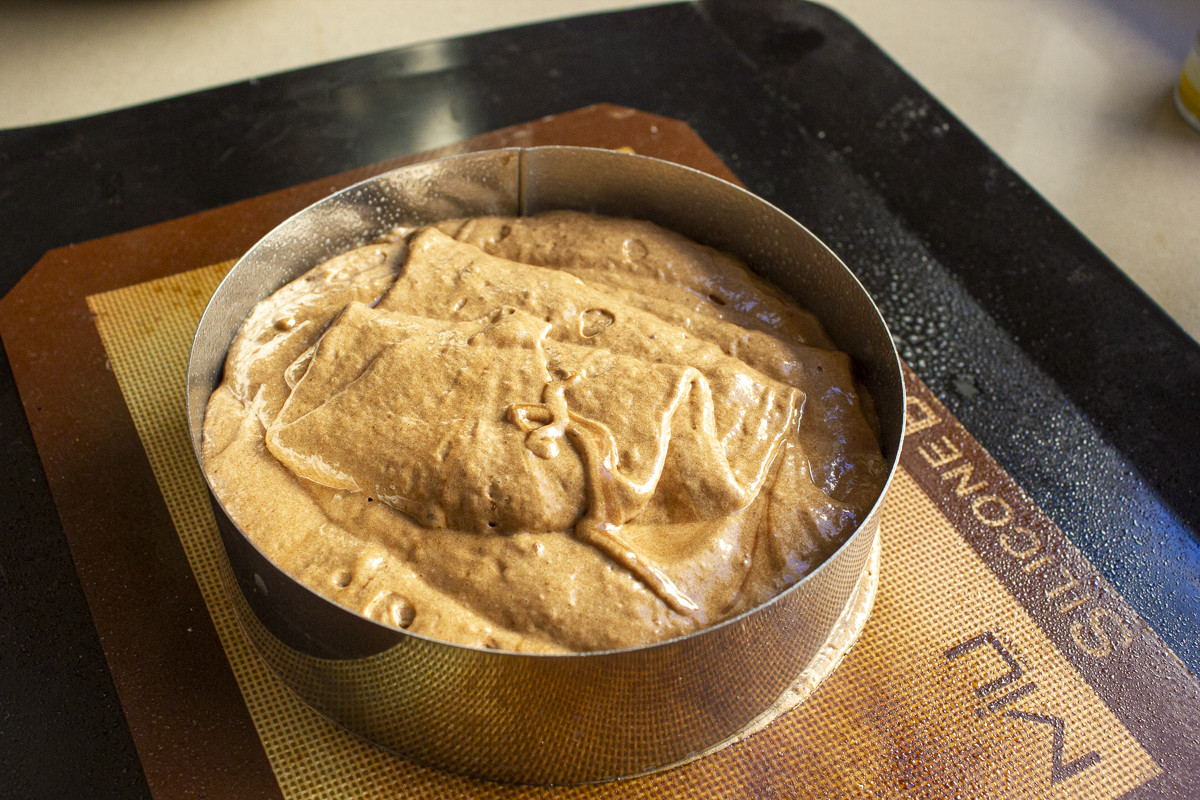 9. Let it cool completely after baking before removing it from the mold. 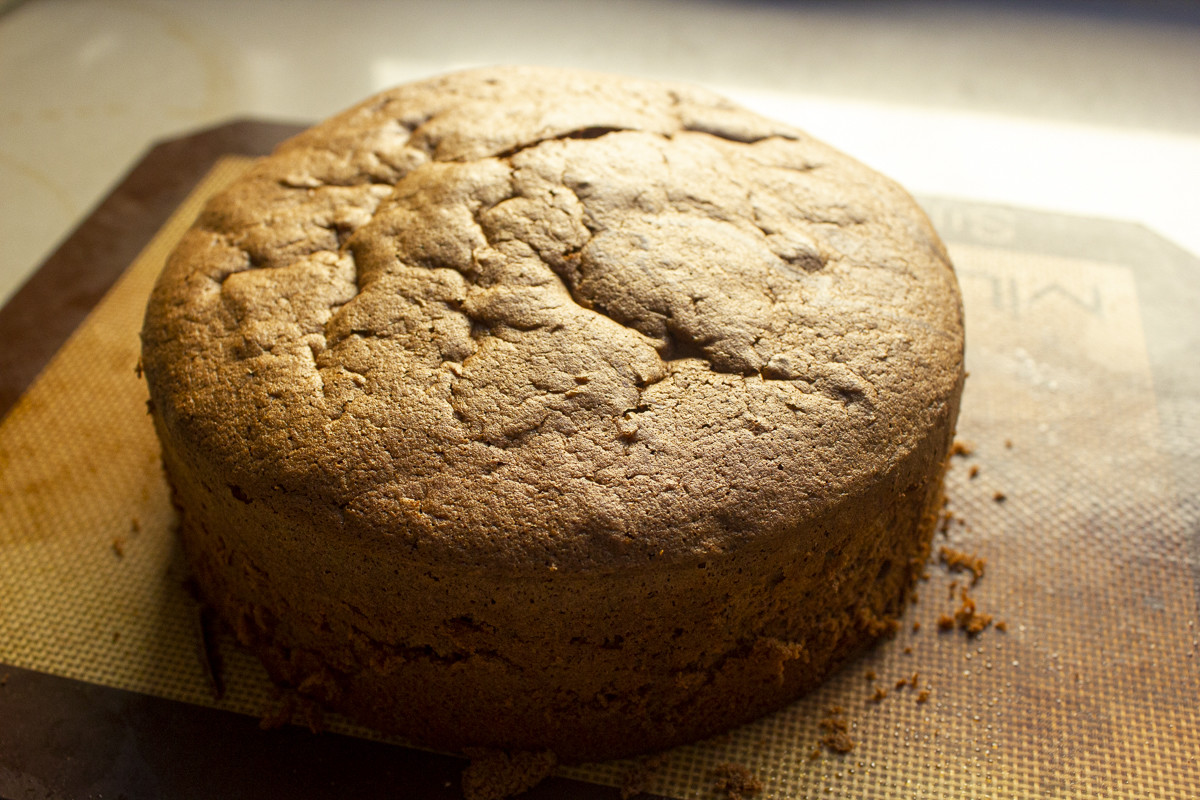 10. Cut your sponge into 3 equal layers. 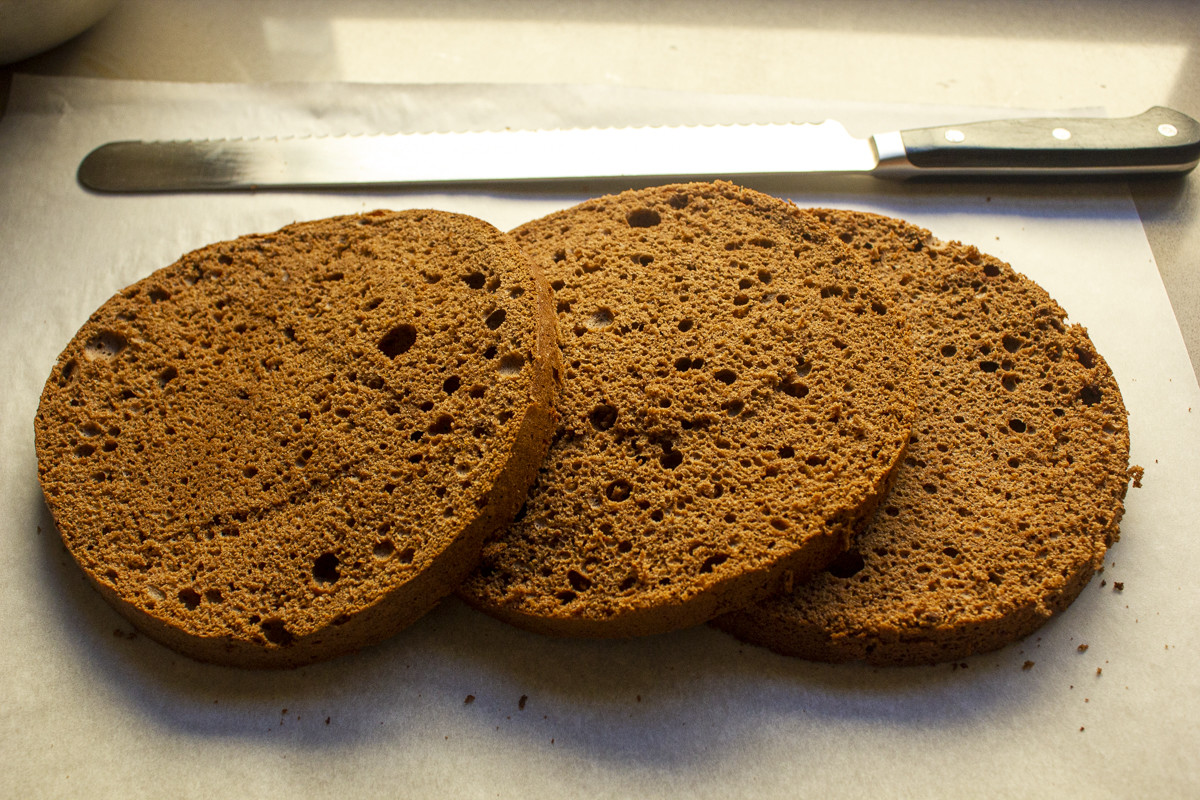 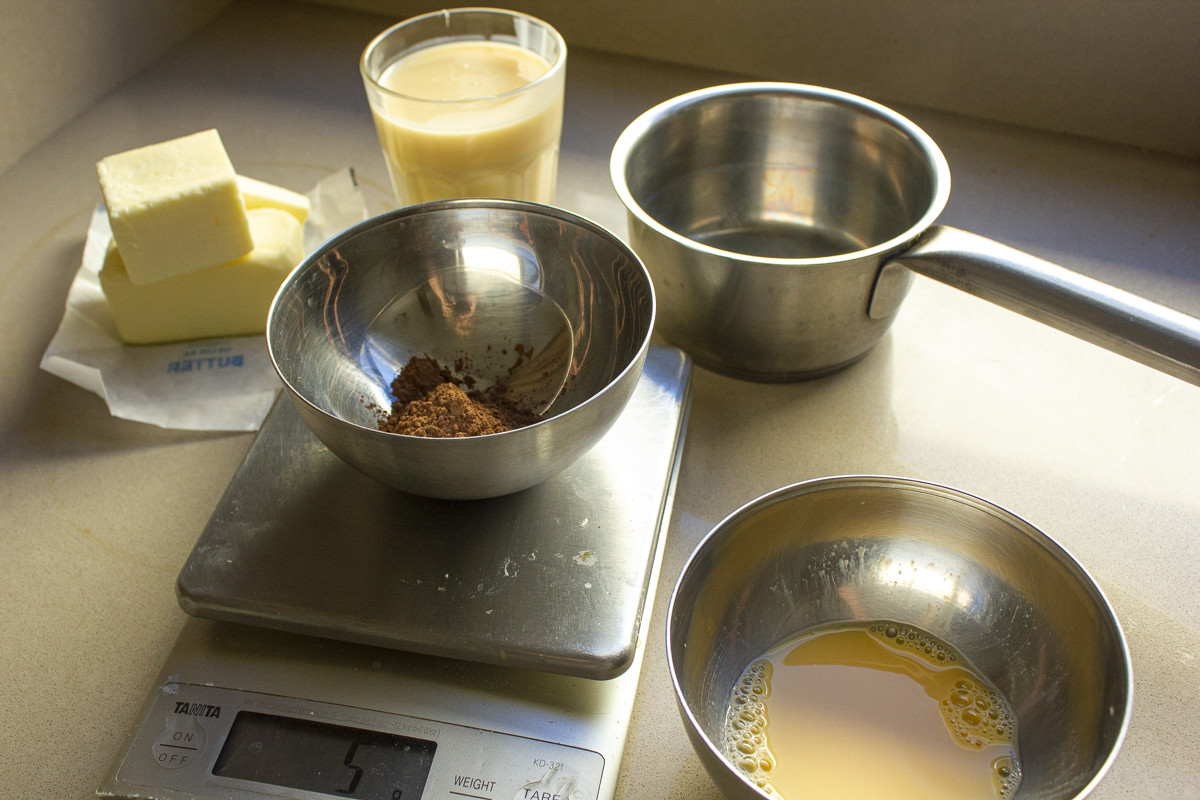 1. In a stand mixer bowl whip your softened butter until it lightens in color. 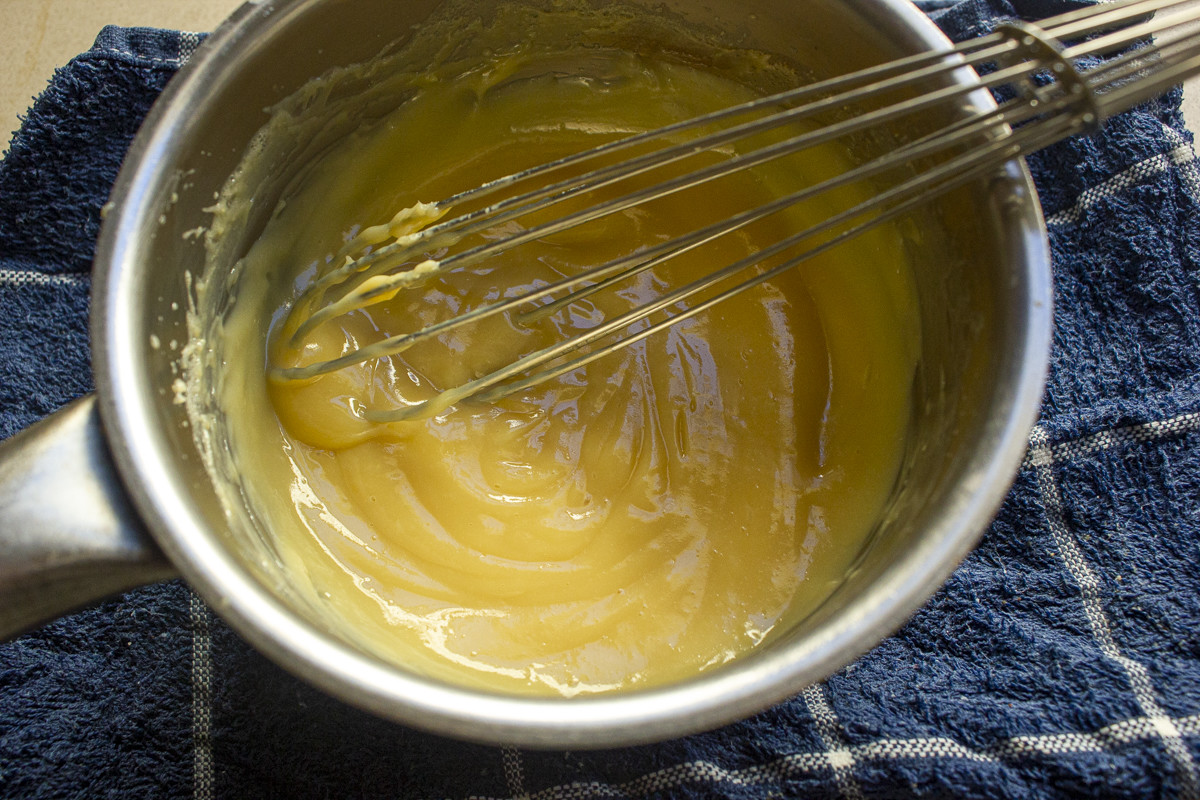 2. In a small pot combine condensed milk, water, vanilla and an egg yolk. Put the pot on medium heat and bring the mixture to a boil, constantly stirring with a whisk. Simmer for 2 minutes. Take off the heat and let it cool completely. 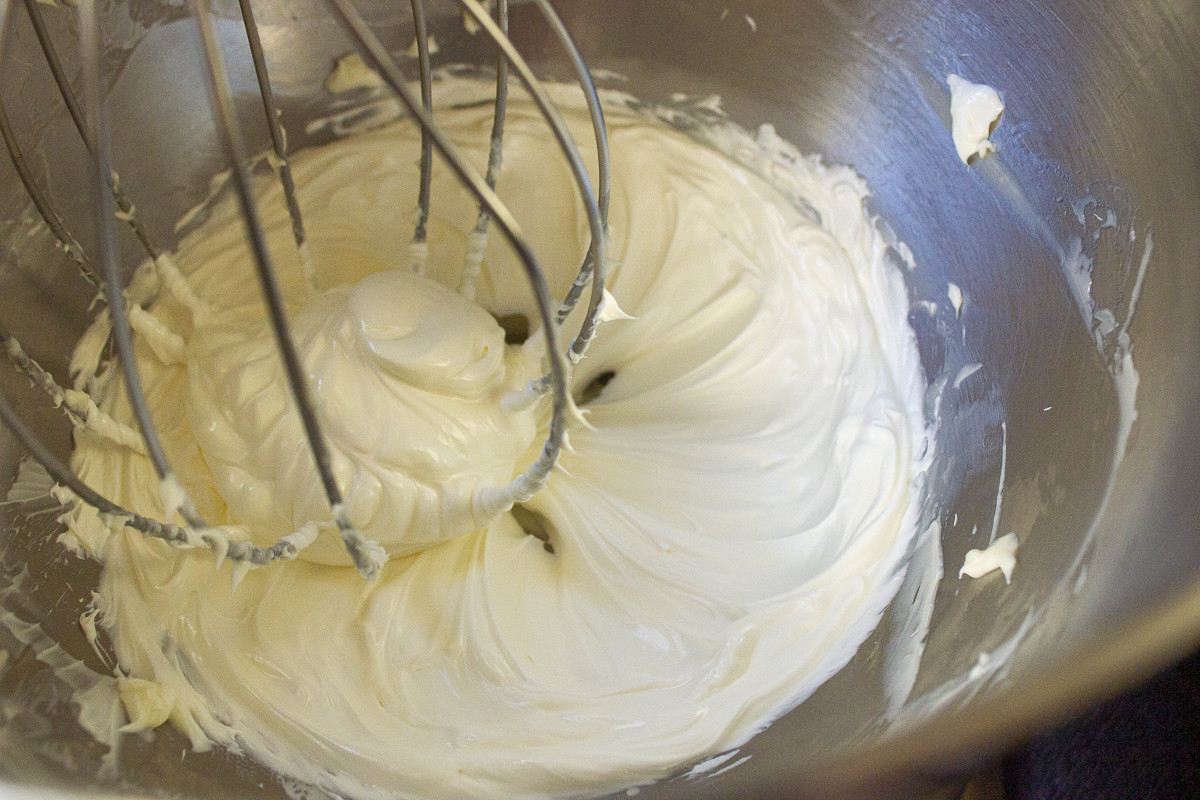 3. To the whipped butter add the condensed milk mixture and cocoa powder. Whip until fully dissolved. 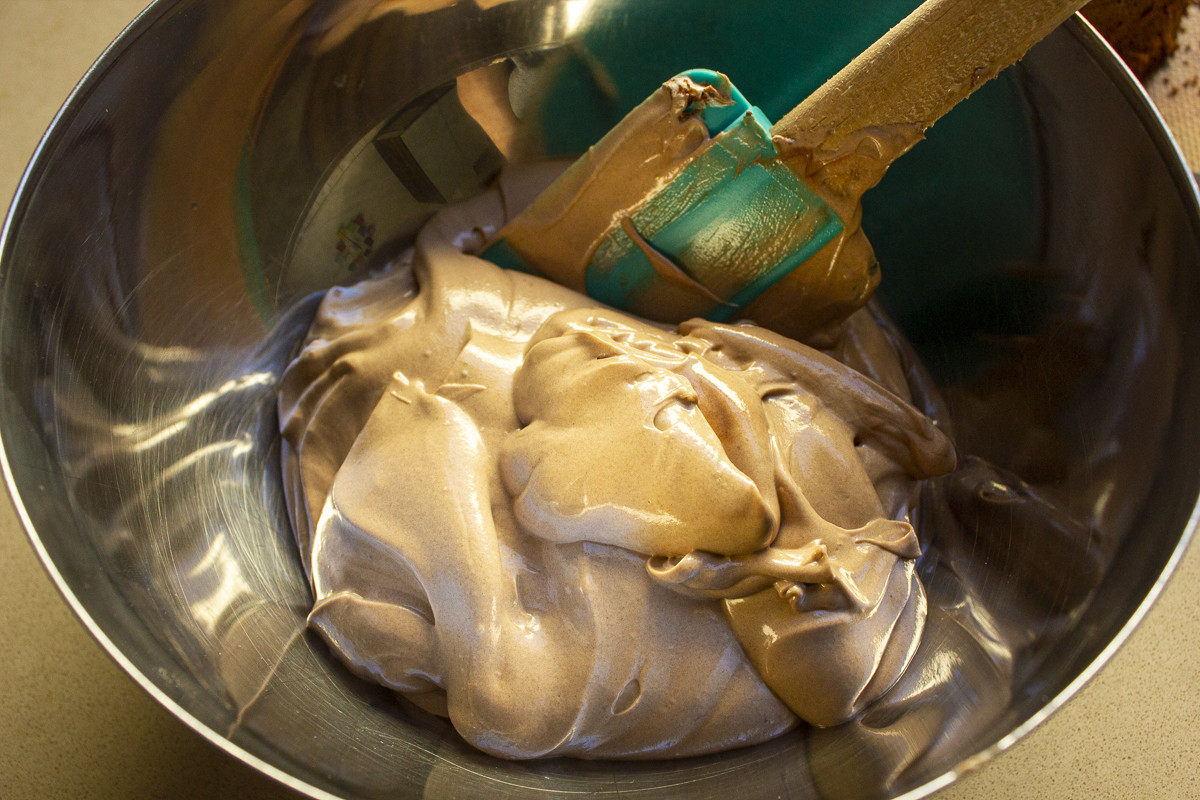 1. Start assembling the cake. Take your bottom layer of the sponge and spread half of your chocolate cream on top. Put the second layer on top and spread the rest of the cream. 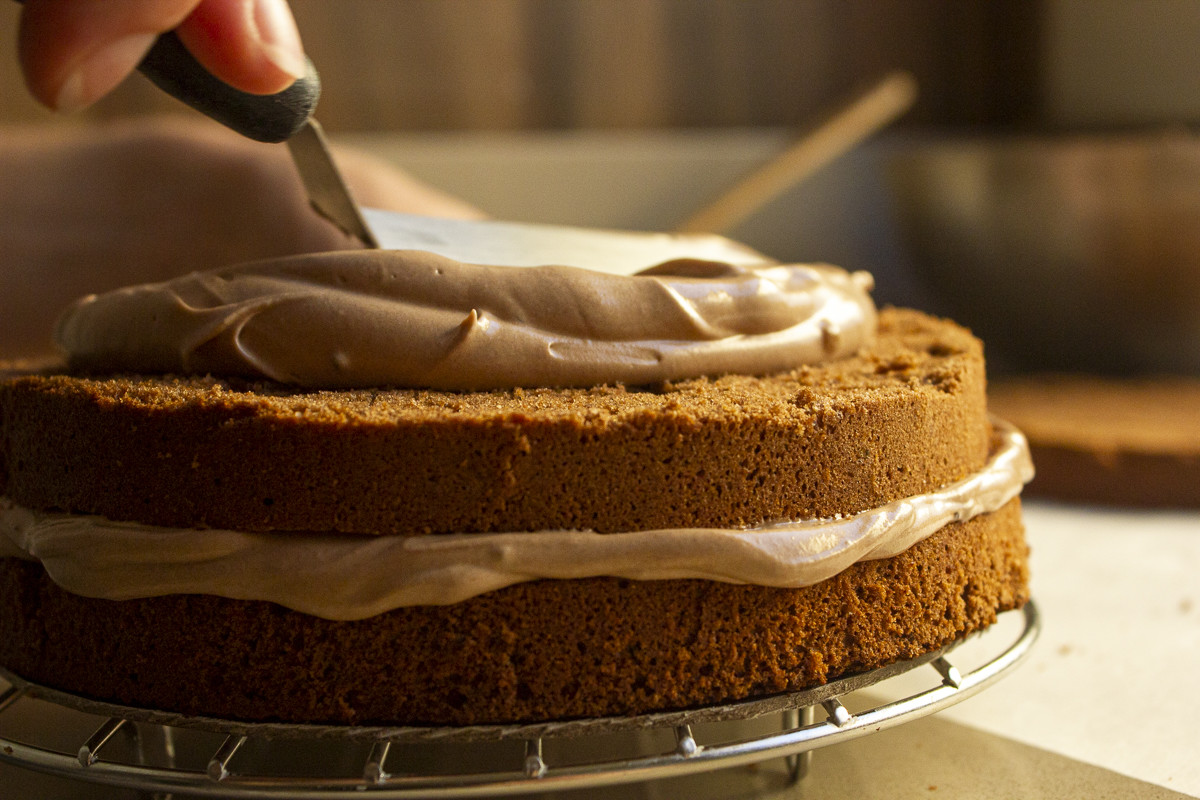 2. Place the last sponge on top. 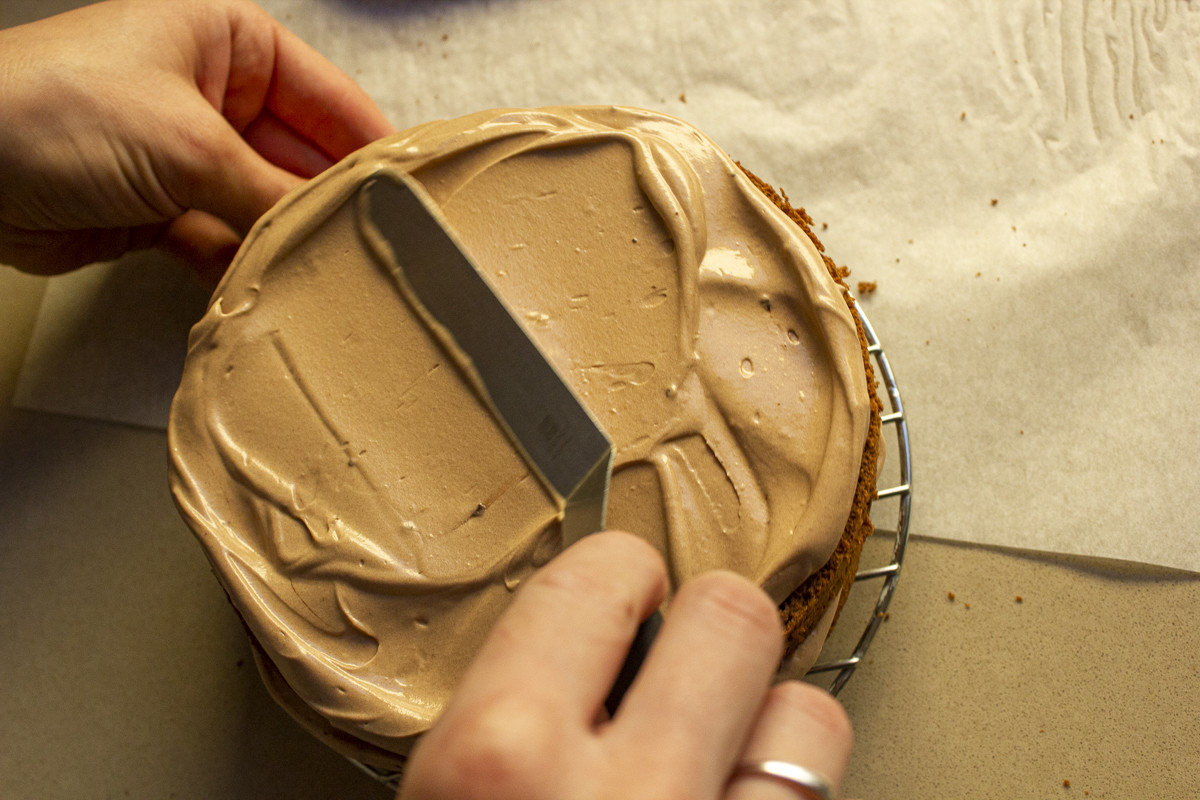 3. Fix the sides of the cake and let sit in the fridge for 30 minutes. 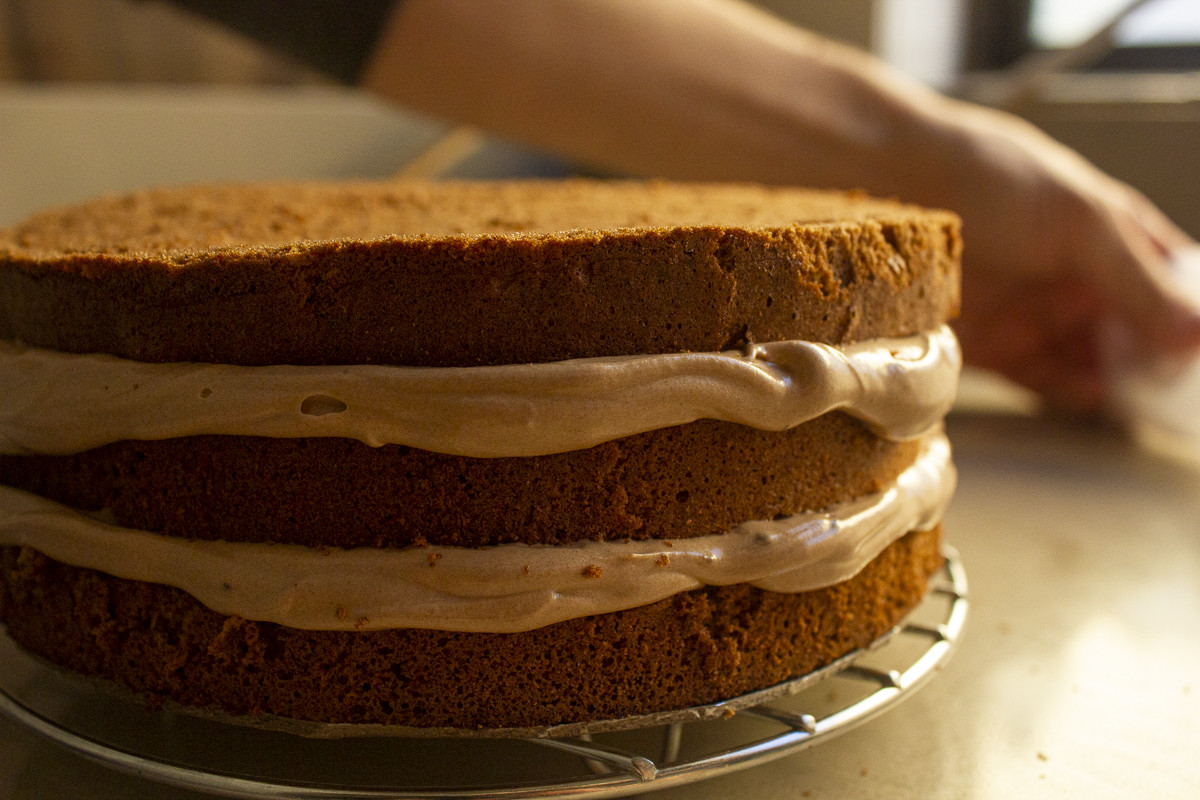 4. Warm up your apricot jam until it’s easily spreadable. 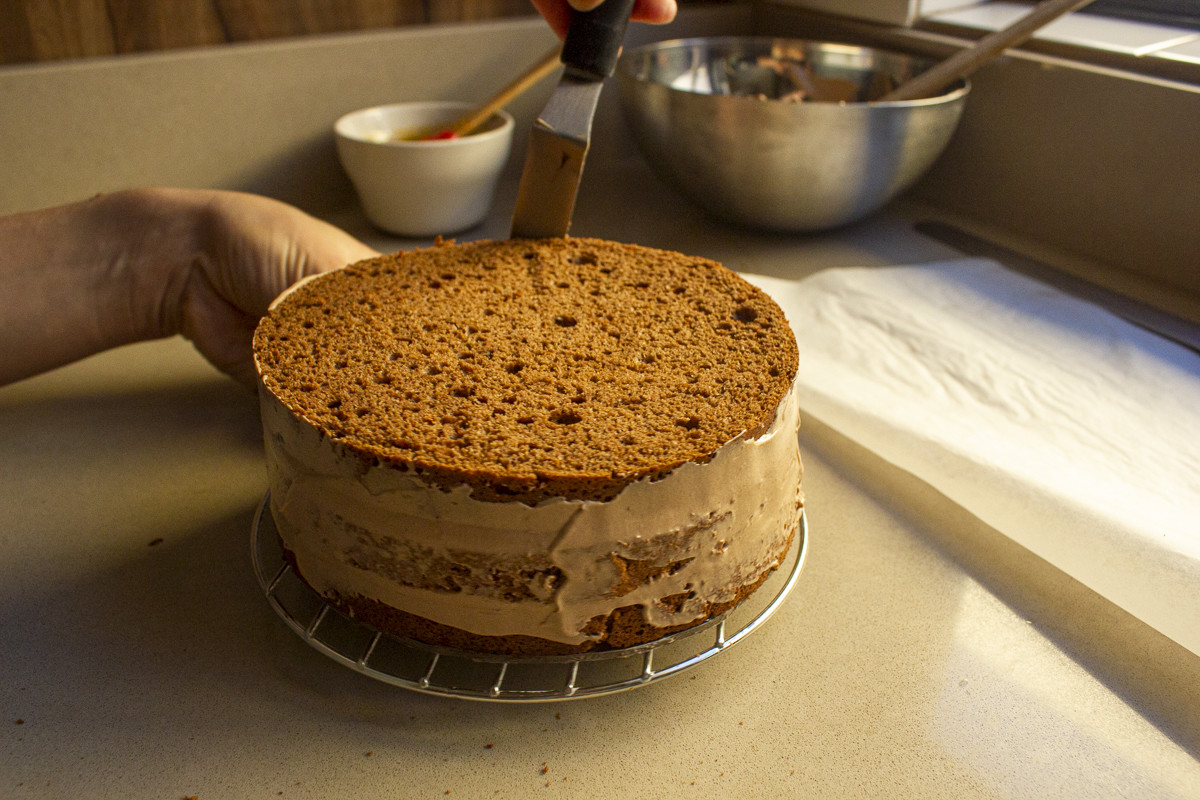 5. Take out your cake and spread a thin layer of apricot jam on the top layer. Leave in the fridge again for 30 minutes. 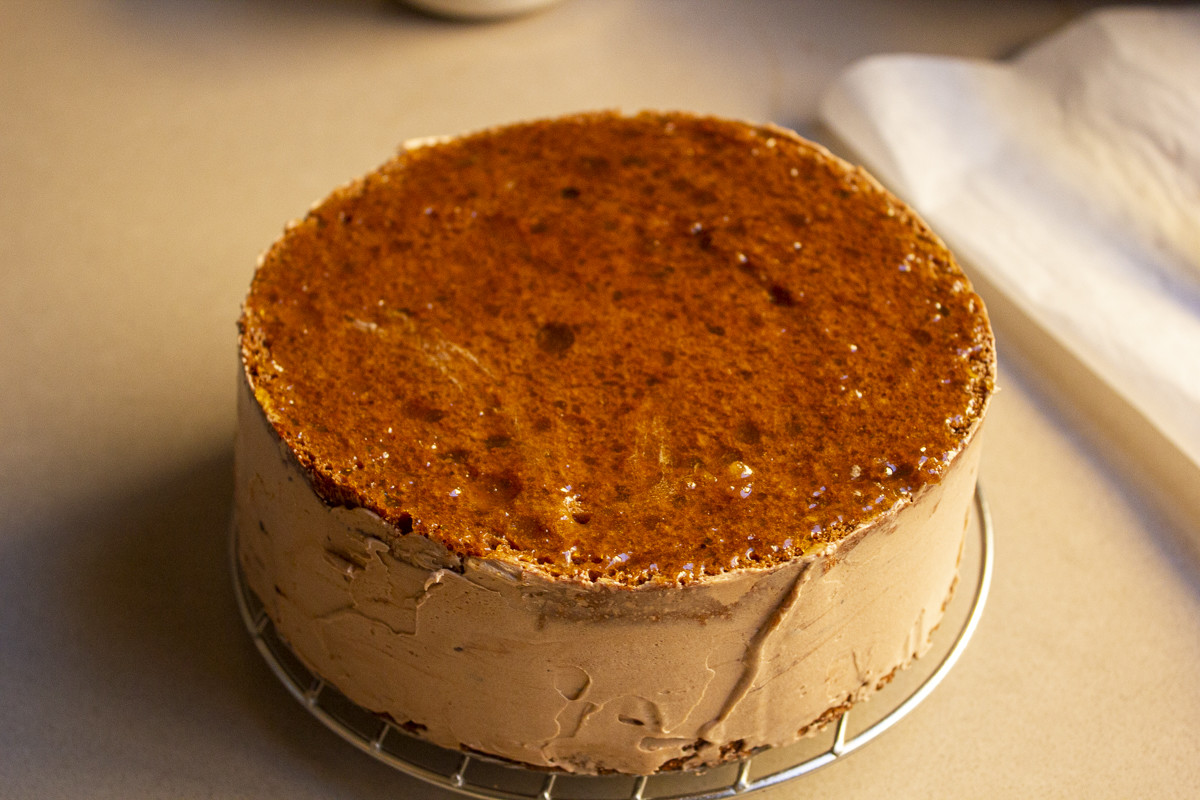 6. Meanwhile, prepare your glaze. Melt the chocolate on a water bath. Melt your butter and mix it with the chocolate. Let it cool to about 35°C. 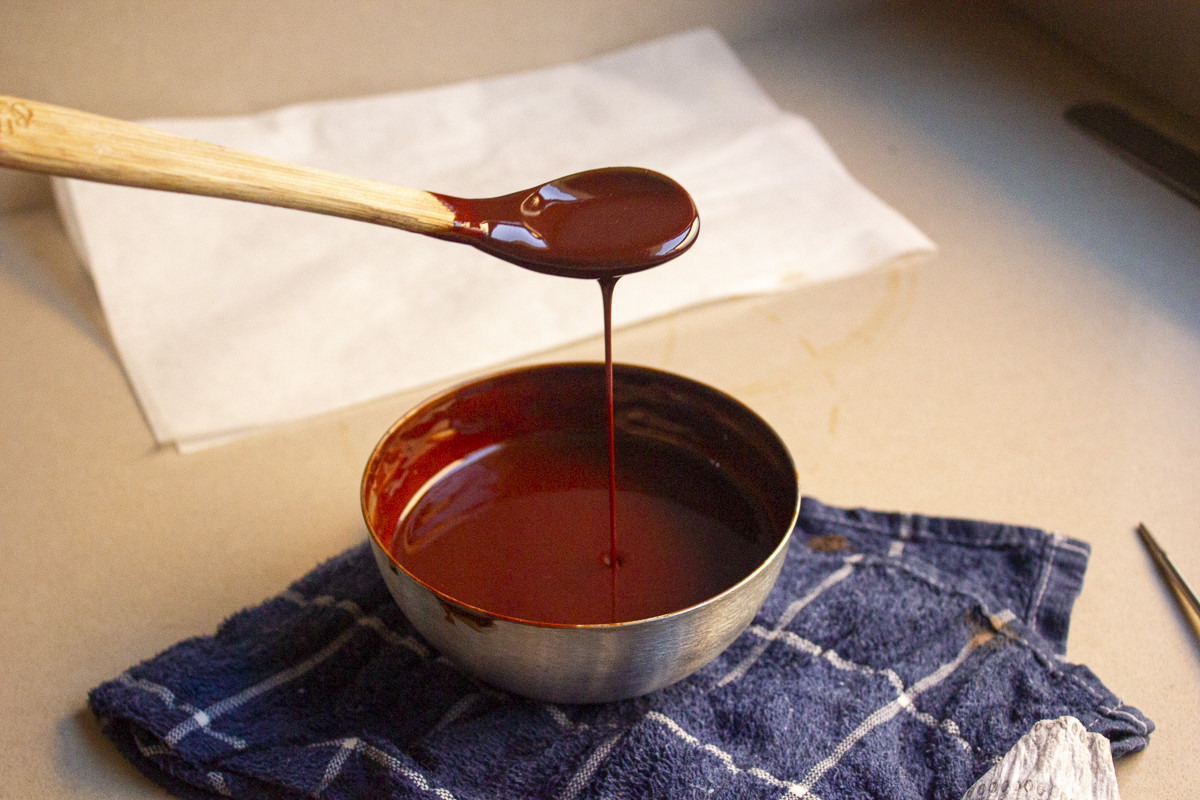 7. Take your cake out of the fridge and carefully glaze it. 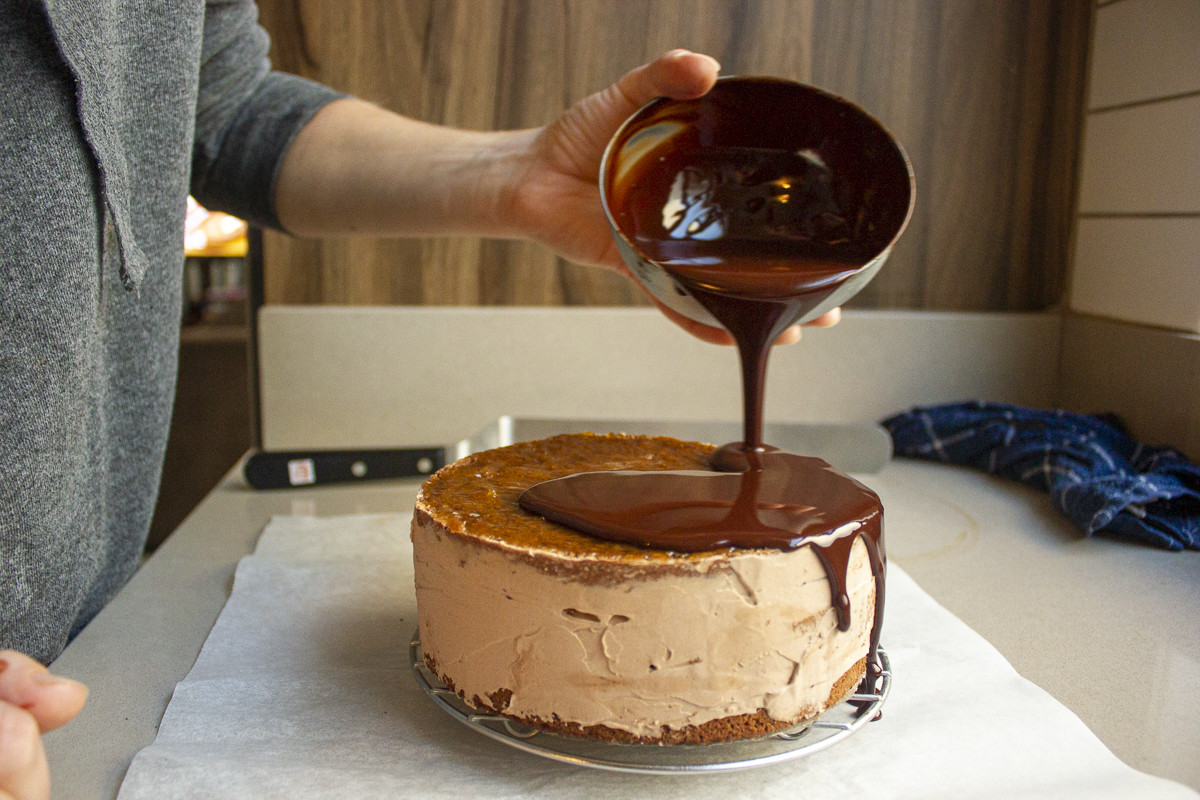 8. Decorate with some chocolate patterns. 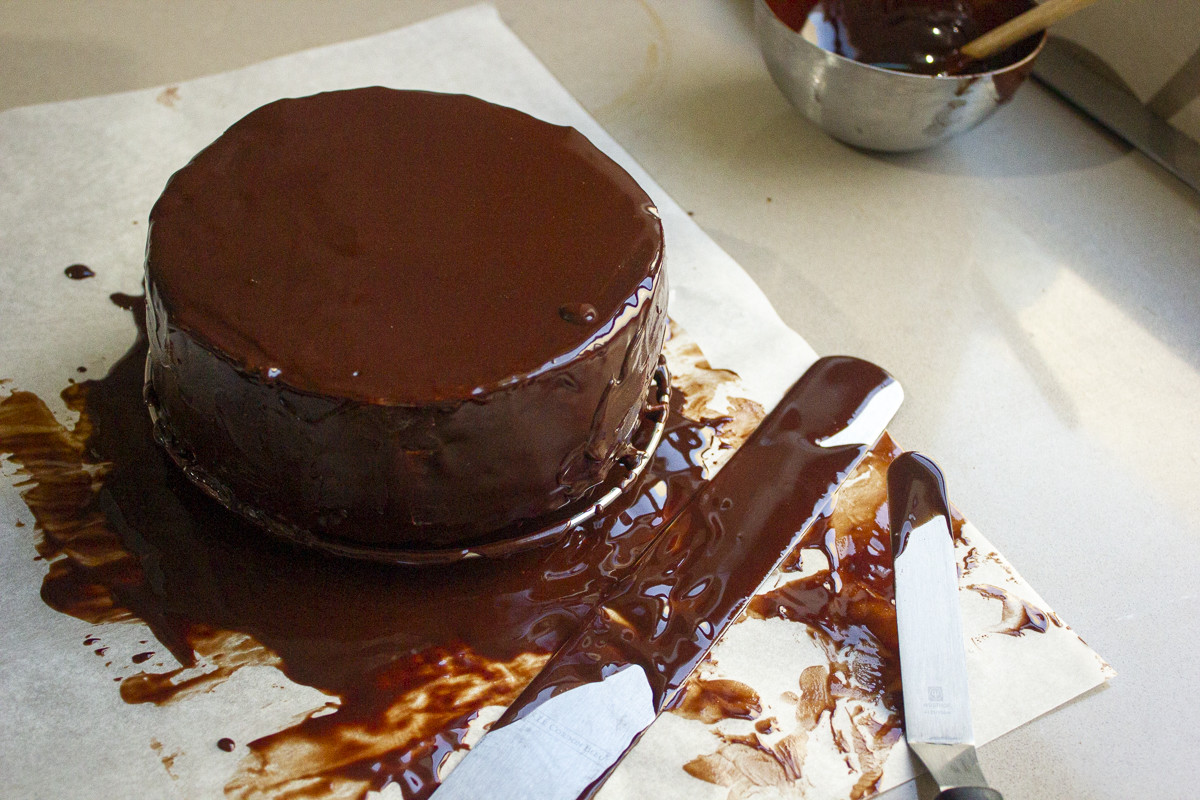 9. Let the glaze sit in the fridge for another 30 minutes. 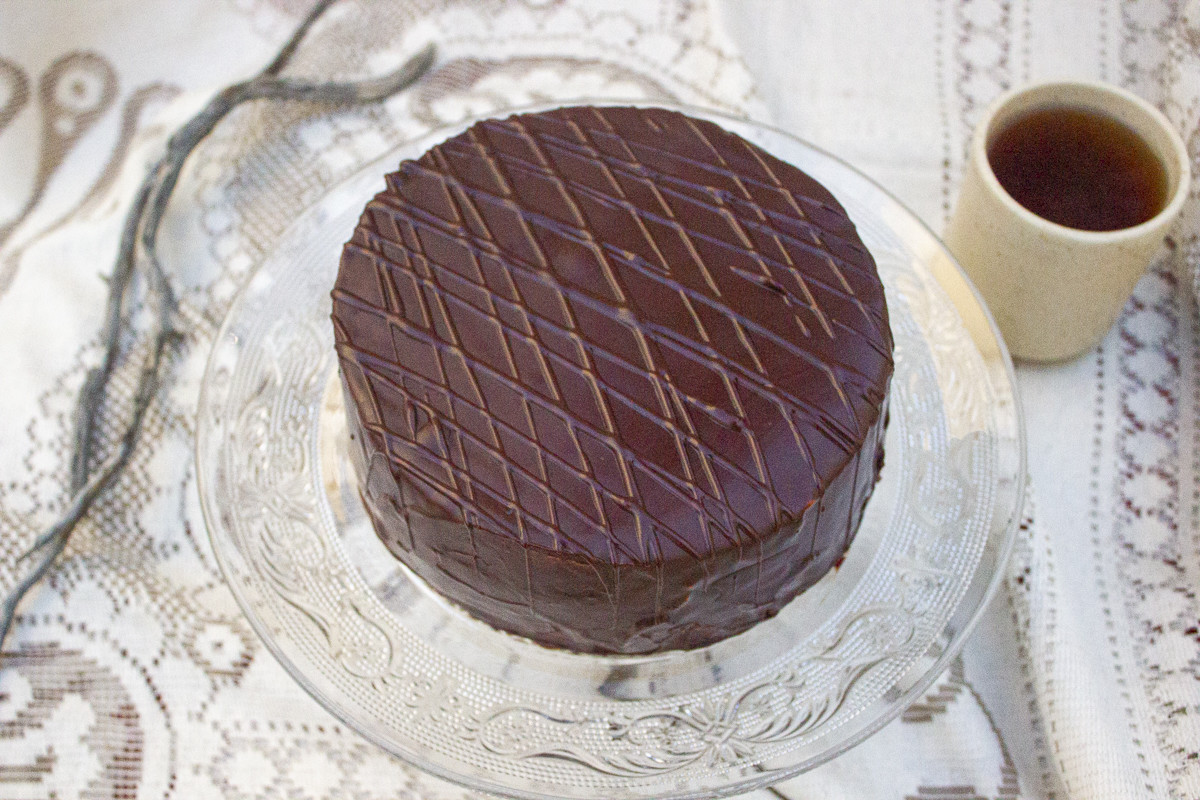 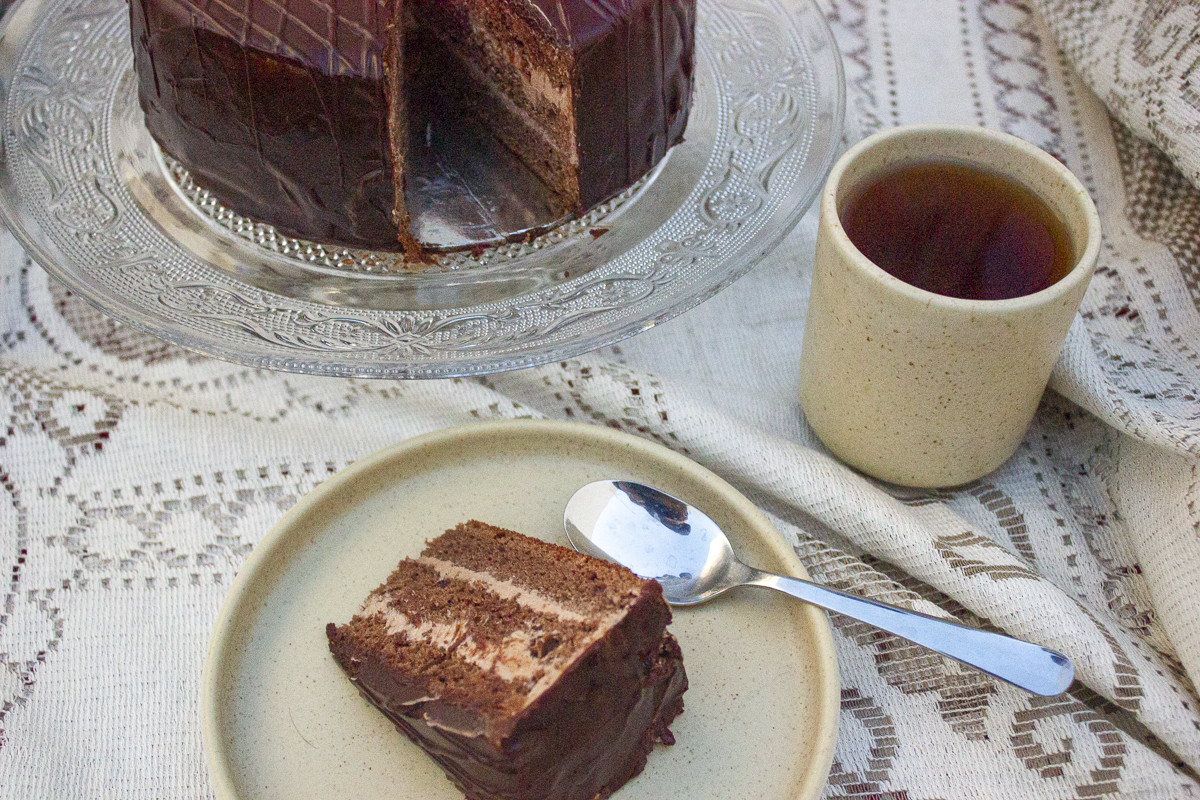