How to make the legendary “Doctorskaya” sausage right at home (RECIPE) 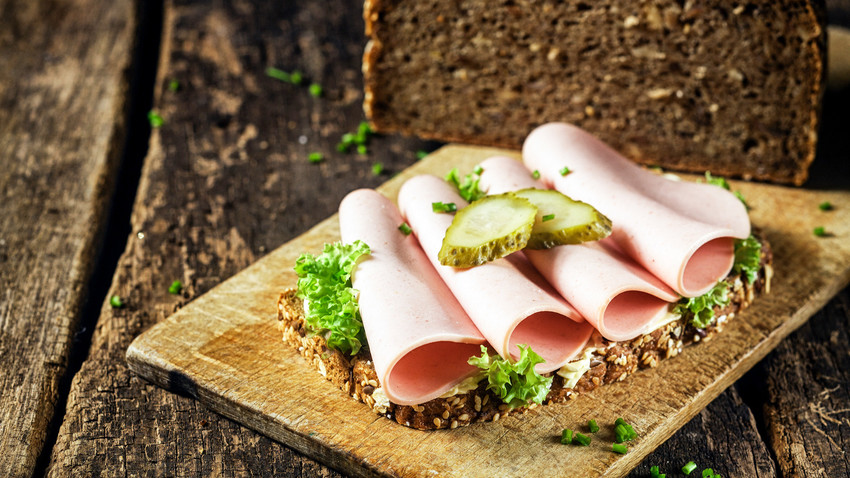 This sausage was just what the doctor ordered!

Legion Media
This is the most popular variety of cooked sausage in the USSR and in post-Soviet republics. An integral part of the Russian diet today, it’s the one thing that Russians living abroad miss most.

In the 1930s the young Soviet nation experienced serious food shortages, which negatively affected the health of workers. So, the People's Commissariat of Health instructed the dietary food specialists at the Mikoyan meat-packing factory to develop a recipe for a "folk" sausage that would be affordable for anyone, regardless of social status. This sausage was reputed to be a symbol of prosperity in the years of total scarcity, and its cost has become one of the benchmarks for comparative analysis: economists are fond of measuring salaries’ purchasing power by the amount of ‘doctor's’ sausage that can be bought with it.

The first loaf of ‘doctor's’ sausage rolled off the food production line in 1936. The new product was intended for the sick, those whose health was undermined “as a result of the Civil War and tsarist despotism”. Supposedly, the recipe of this sausage was verified by doctors to the minutest detail. Unlike other sausages, this one consisted of lean cuts of beef and pork, with a minimum of spices, fat and salt. In addition, the sausage mince went through a meat grinder twice. Its recipe was suitable for those who suffered from liver and stomach diseases because it was easily digestible. In general, it’s what the doctor recommends, hence the name doctorskaya.

In 1974, the composition was changed for the first time - it was allowed to add up to 2 percent of starch or flour. Later, the recipe of the once dietary sausage deviated so much from the original that today nutritionists hardly call it "medicinal". Nowadays, the recipe for this sausage is no longer strictly regulated by government standards. Every manufacturer has their own recipe, and of course they claim it is the best. But nothing really beats the original recipe of doktorskaya and that is the one we offer you to try to make. 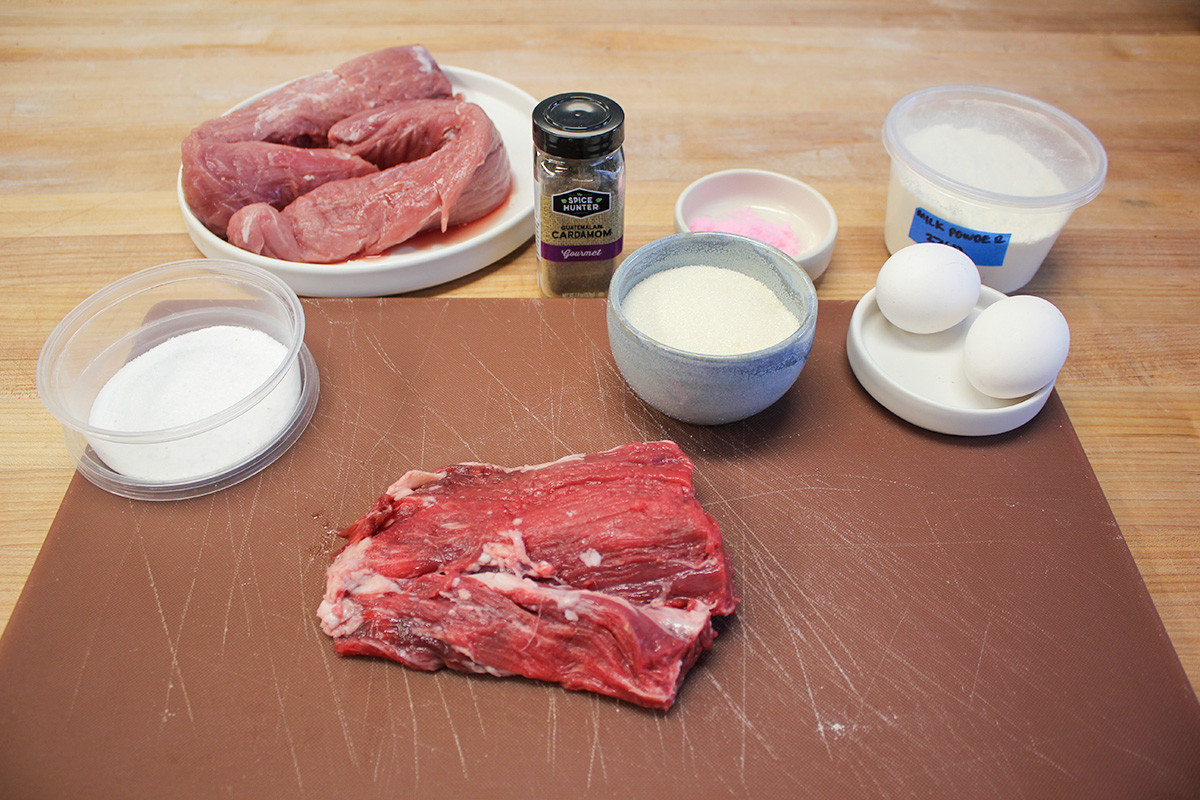 1. Grind your beef and pork separately in a meat grinder. If you don’t have one, cut your meat into the smallest pieces possible. Season the ground meat with salt and sugar according to the recipe and leave covered in the fridge overnight. This will allow your meat to mature and get nicely seasoned. 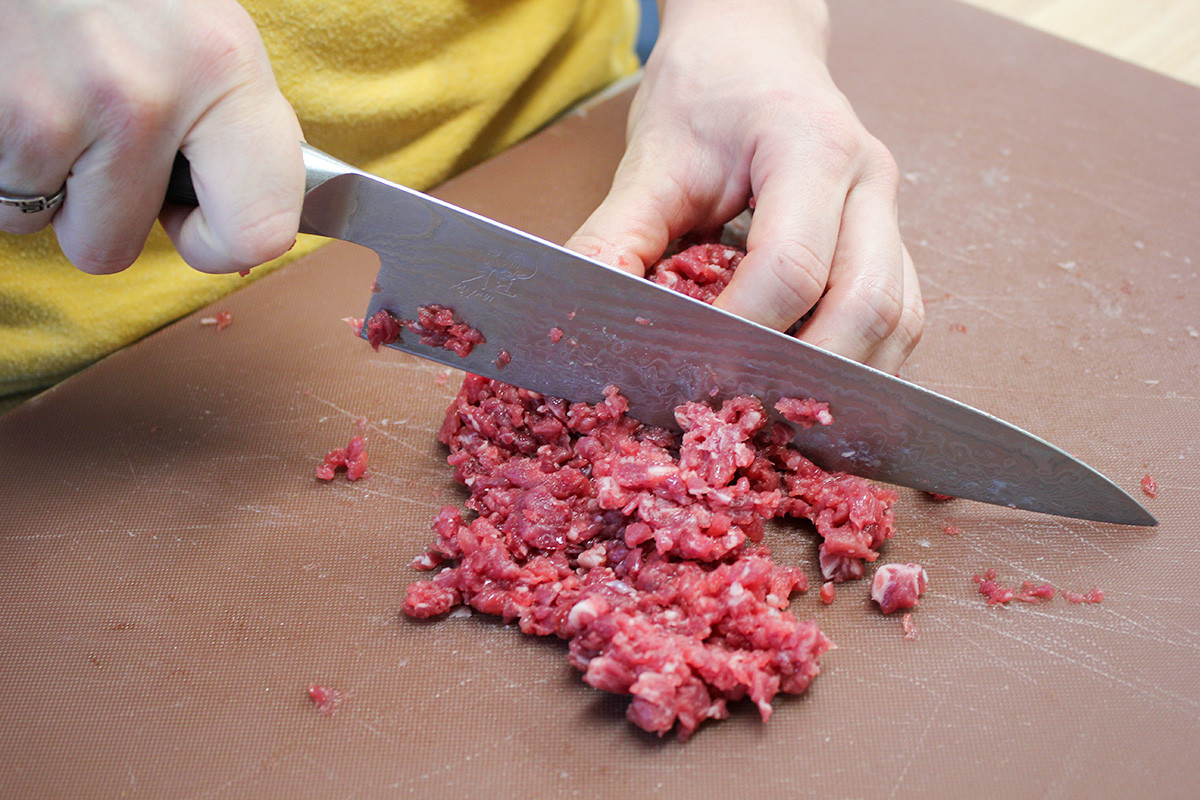 2. The next day prepare all your ingredients and put the ground meat in the fridge for 30 minutes and up to an hour. Freezing the meat slightly will help it bind together better. Then mix together all the ingredients and pass them through a meat grinder at least a couple of times or use a food processor to make sure your mixture is really bound together. You’ll know it’s ready once it passes the “sticky test”: If you grab a chunk with the palm of your hand and flip it meat facing down, then it should stick to your hand. 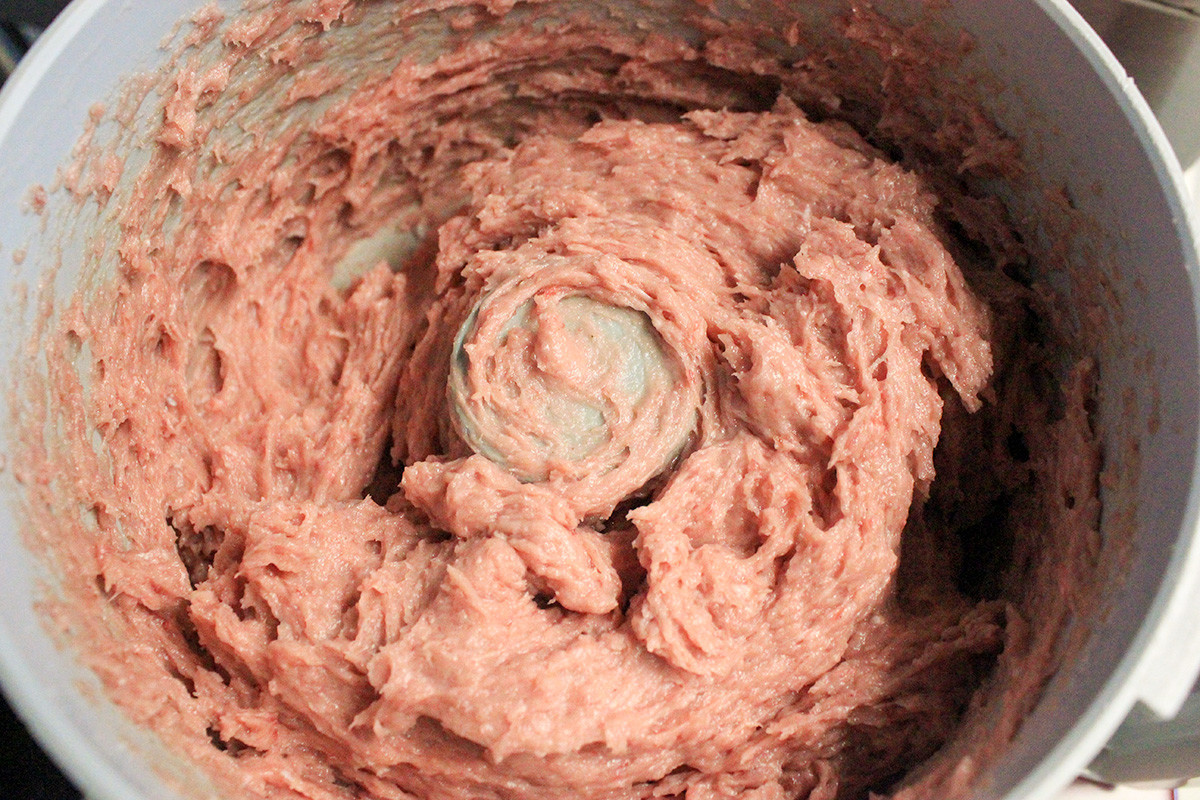 3. Now it is ready to roll. Grab some plastic film and roll the meat very tightly until it looks like a sausage. Tie up the edges of the sausage with some thread as tight as possible. Take a clean needle and carefully poke holes in the sausage letting the air escape. Now place the sausage into a plastic bag. 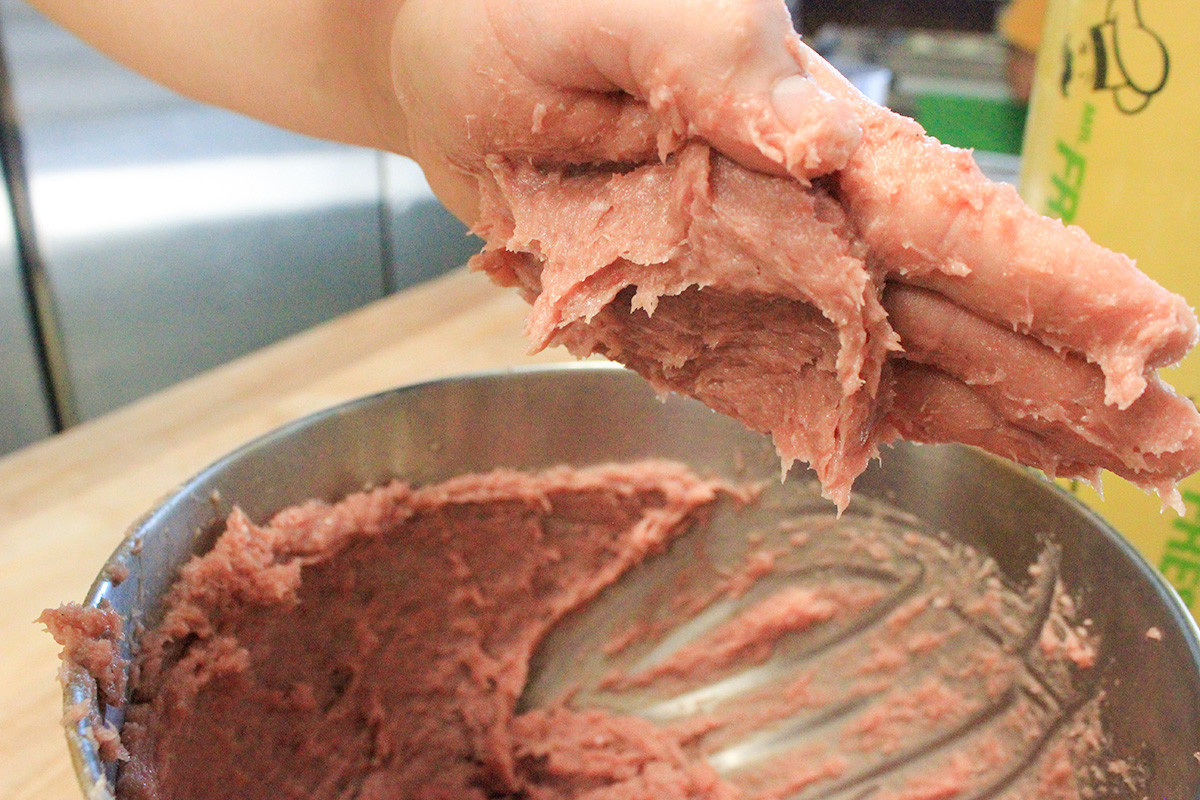 4. Prepare a pot with water and carefully lower your sausage in a way that the air escapes from the bag and it sinks underwater completely. This will create a vacuum inside the bag which will help it cook in the best way. Use a thermometer to bring the water to 65-70°C and cook the sausage for about 3 hours or until it reaches 65°C in the center. 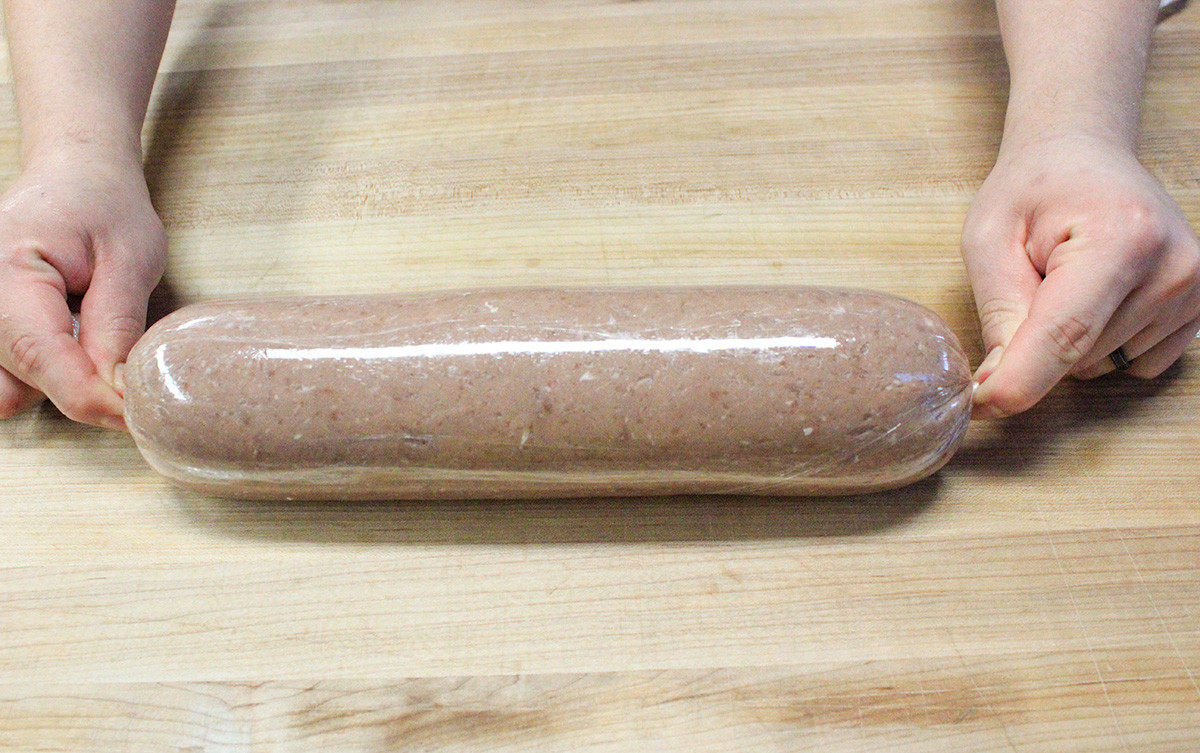 5. Once the sausage is cooked, remove it from the water, and immediately place it on an ice bath. 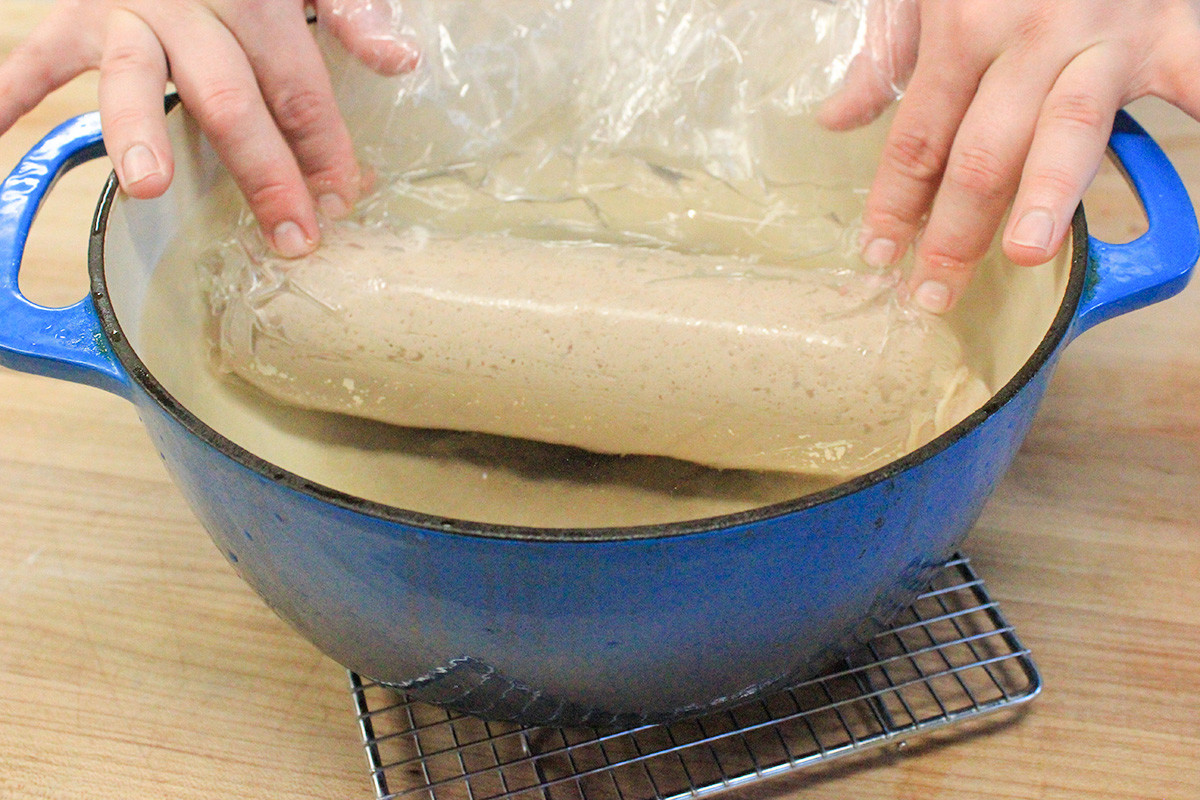 6. It is ready to eat when it's cooled down. Enjoy! 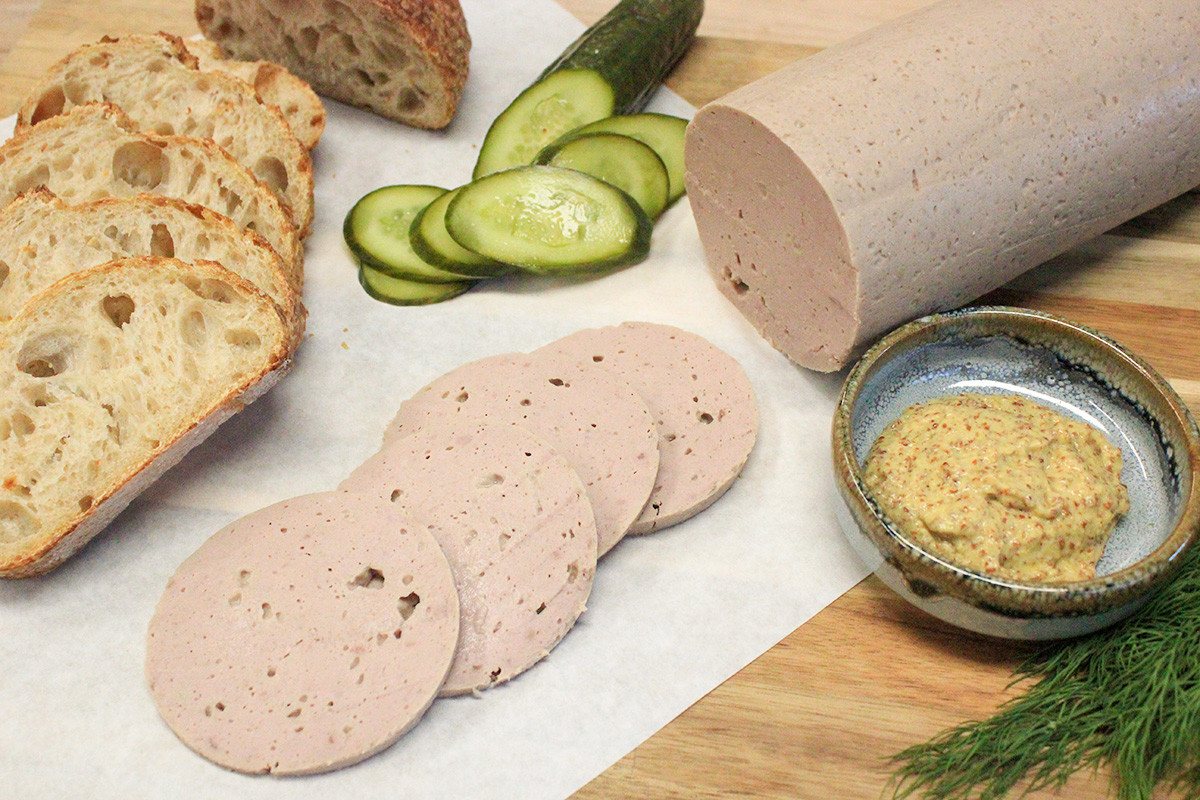