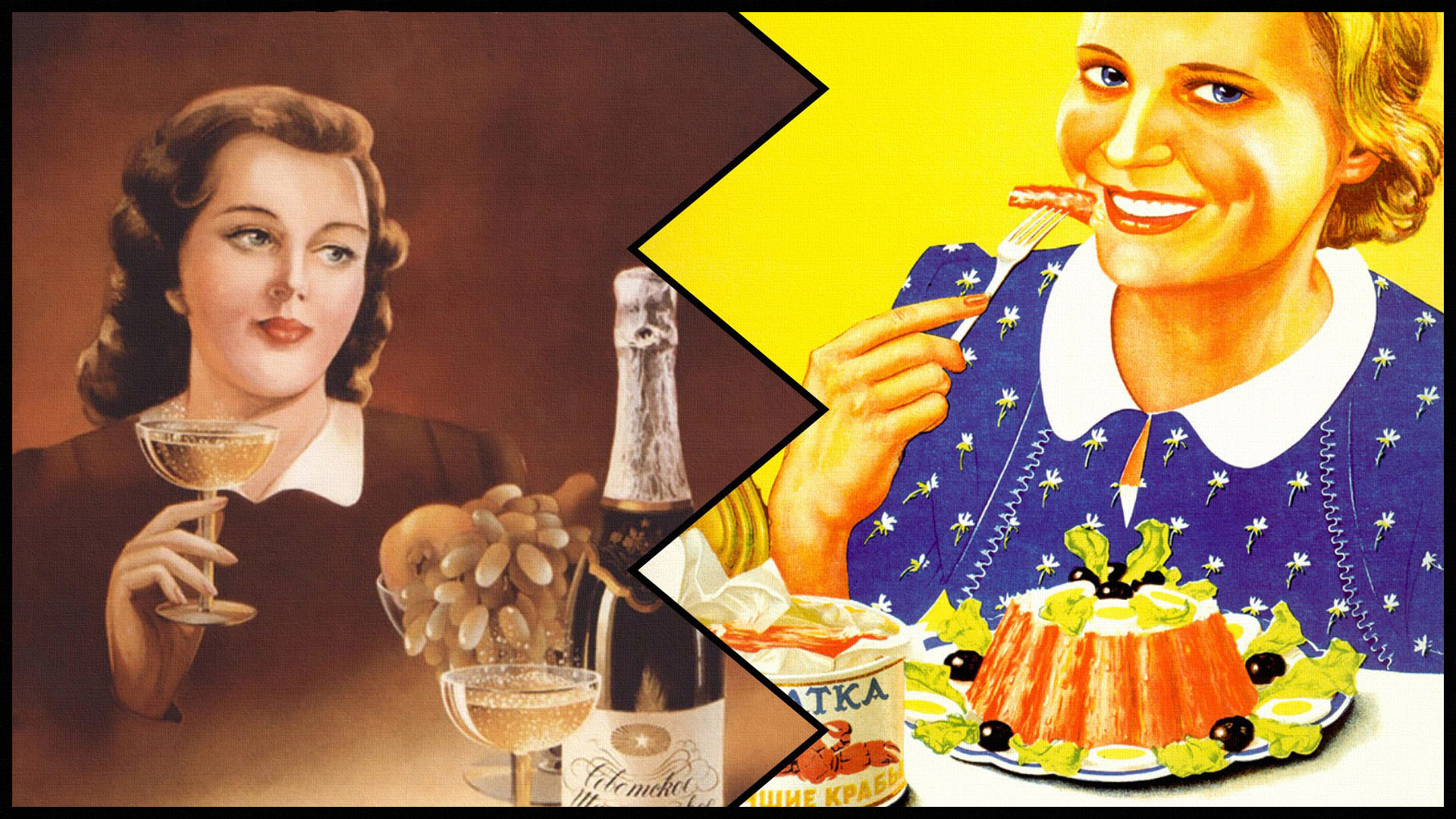 Archive photo
Soviet agitprop posters advised people how to raise children, how much to work, what to do in their spare time, and even what to eat and drink. Let's see what the Soviet Ministry of Food Industry recommended (and whether your stomach agrees).

Soviet canned food was particularly encouraged. For example, here's a poster showing how many dishes a housewife can make with sprats. 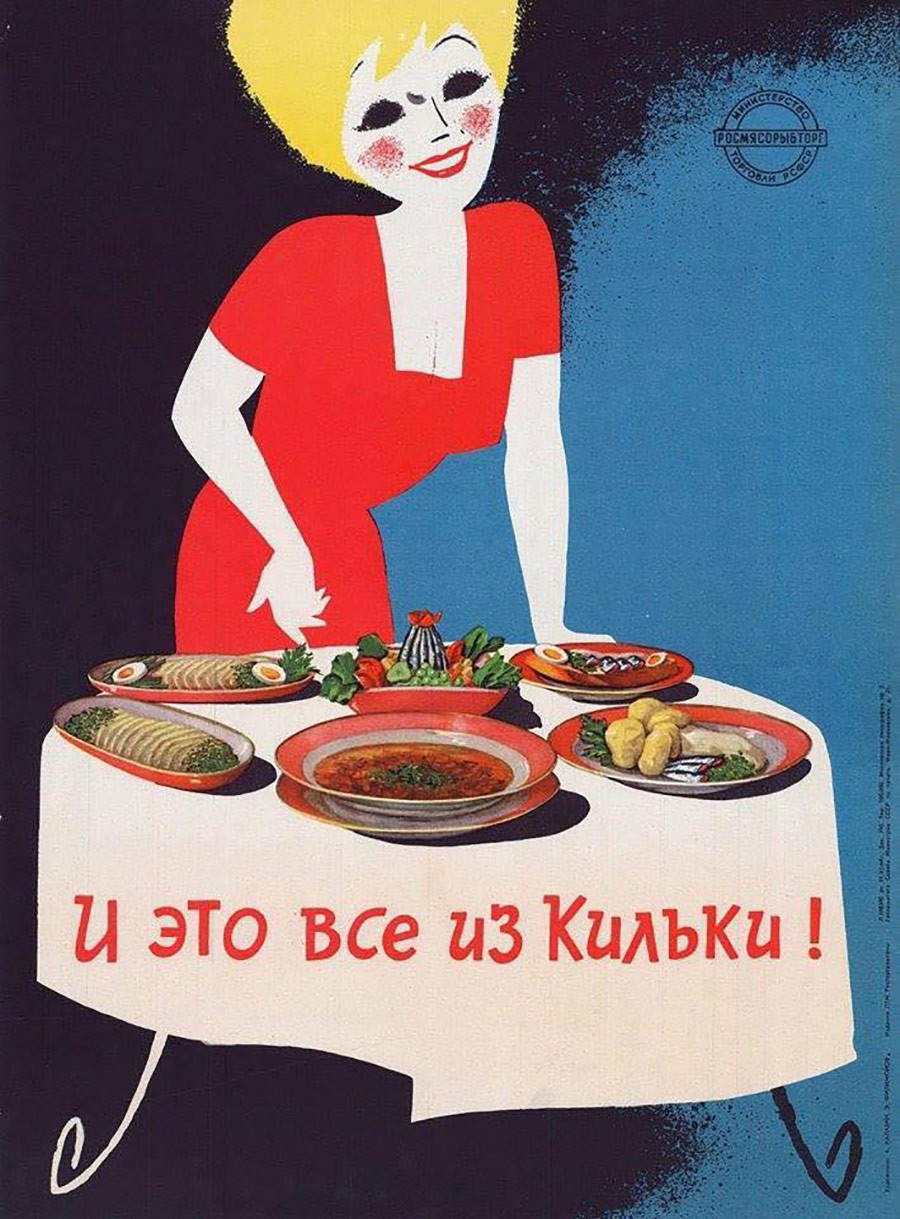 Canning gave people a chance to taste such delicacies as crab. 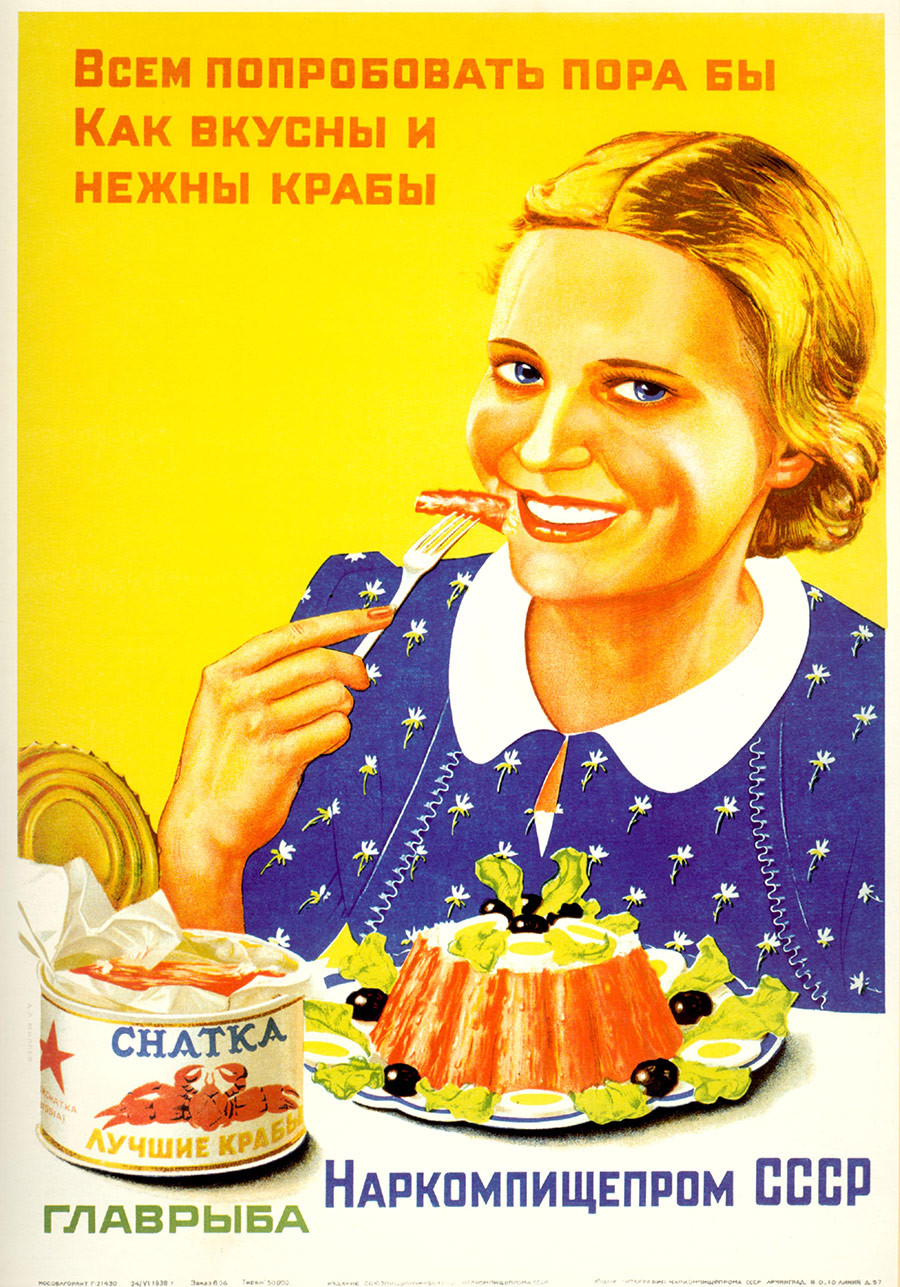 Today, crab is incredibly expensive, but in the USSR it was an affordable snack, as was black caviar. 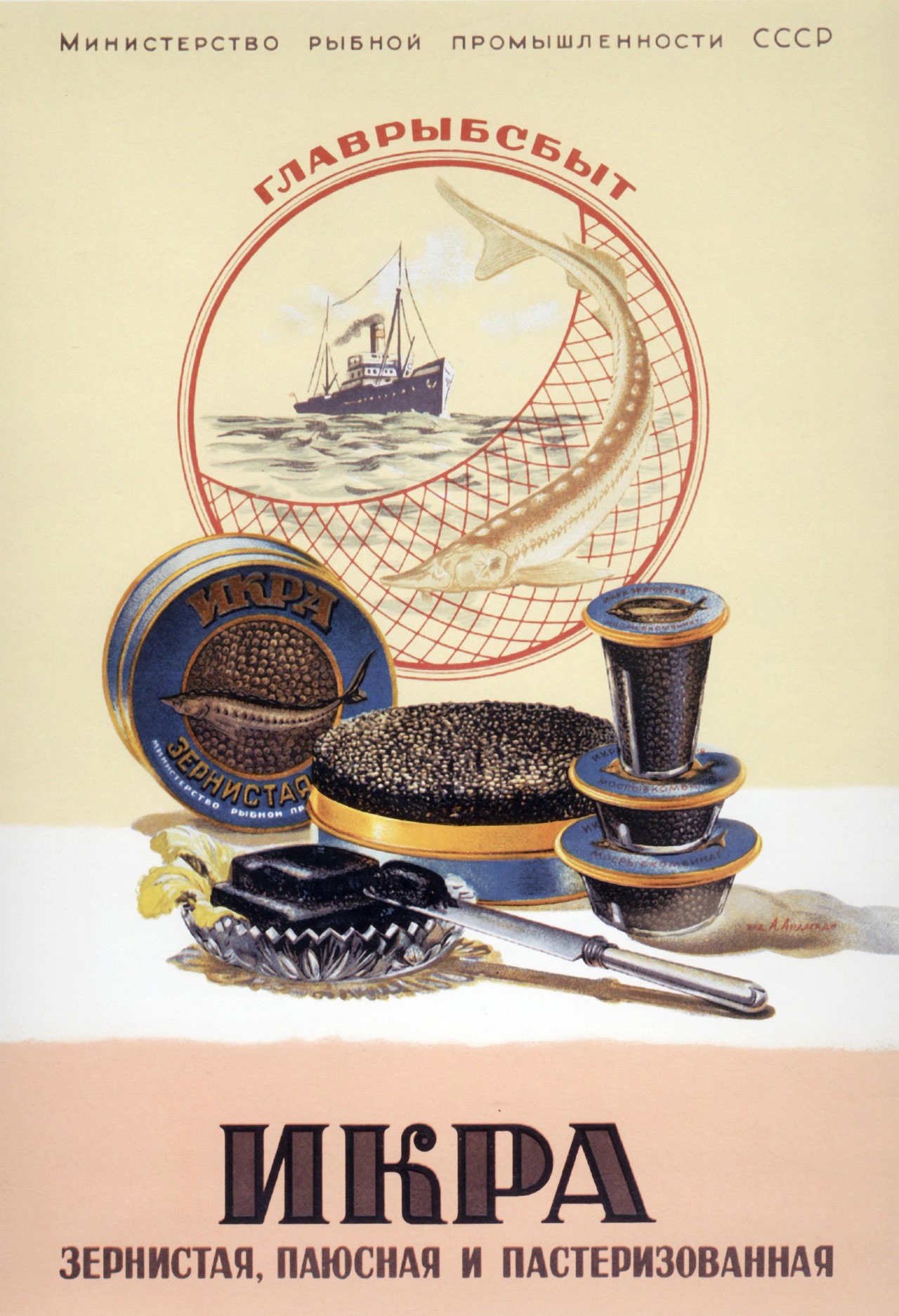 Besides fish, there were many other canned foods, for example, corn (the poster even finds space for a 5-minute corn soup/porridge recipe) 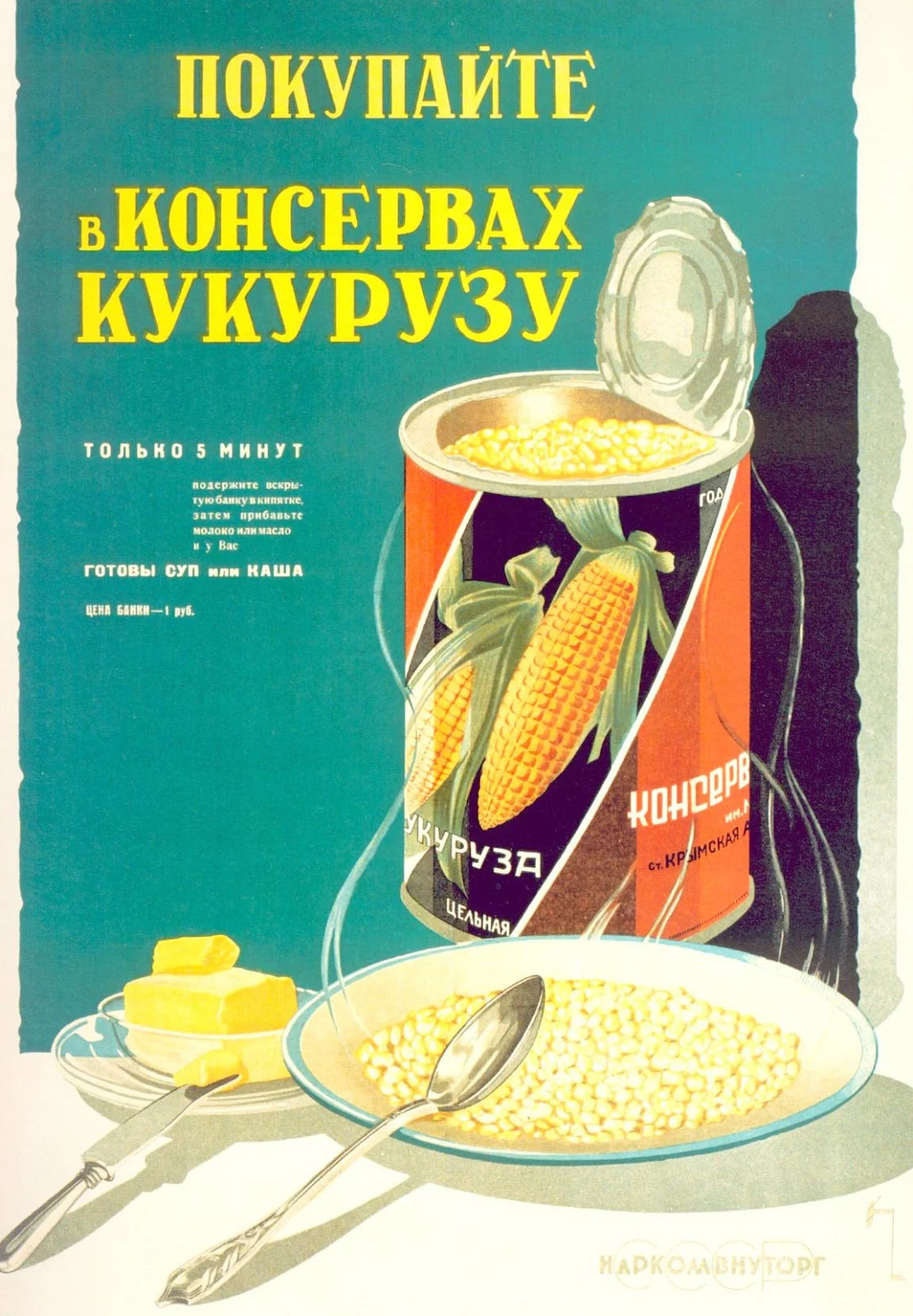 It’s only now that stores stock tomatoes all year round, but in winter in Soviet times people bought canned tomatoes or tomato paste. The latter was added to borsch! 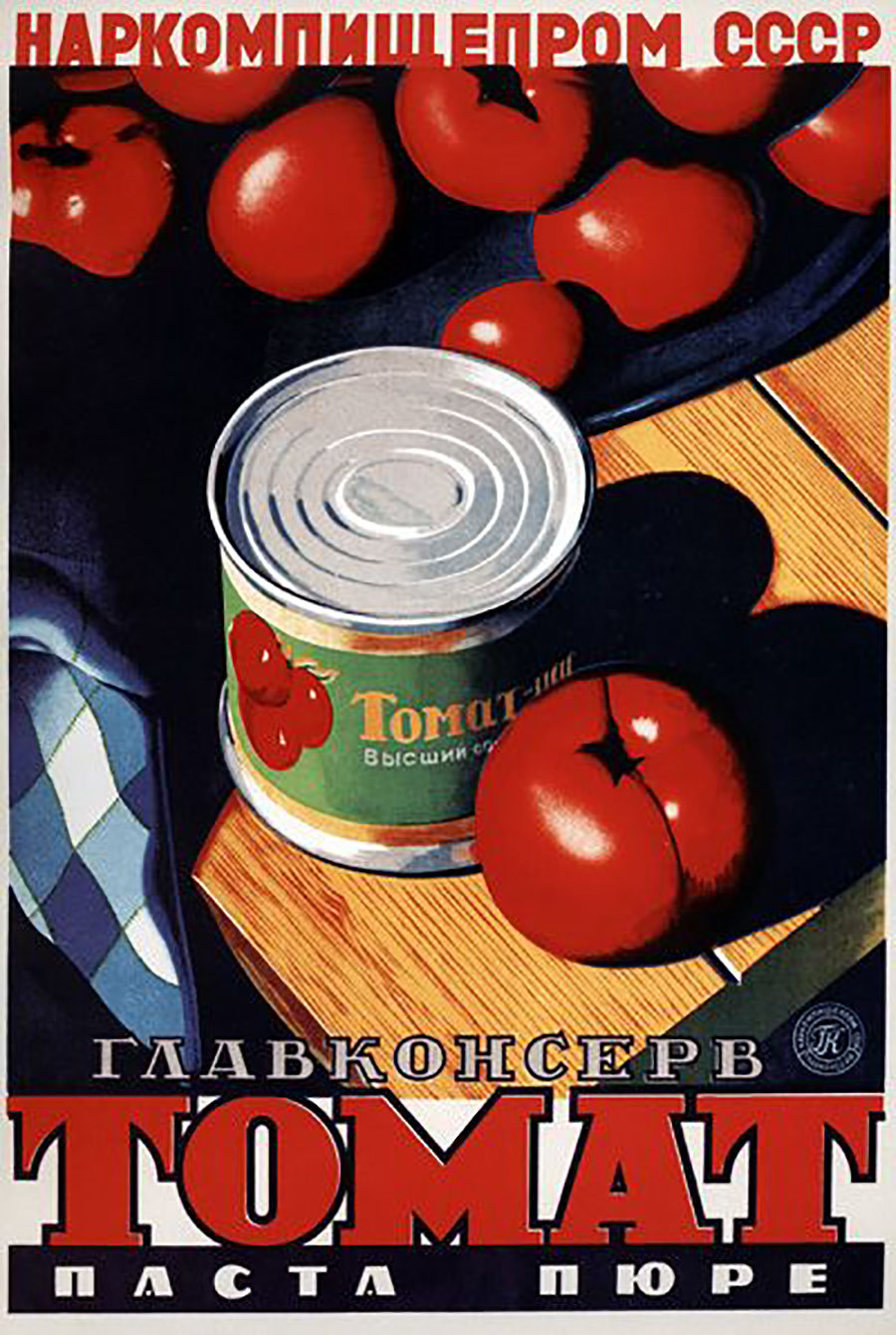 Sausages and doktorskaya kolbasa (“doctor's sausage” — a sort of low-fat bologna) were cheap and popular. Inevitably, there were many jokes about how they contained everything except meat. 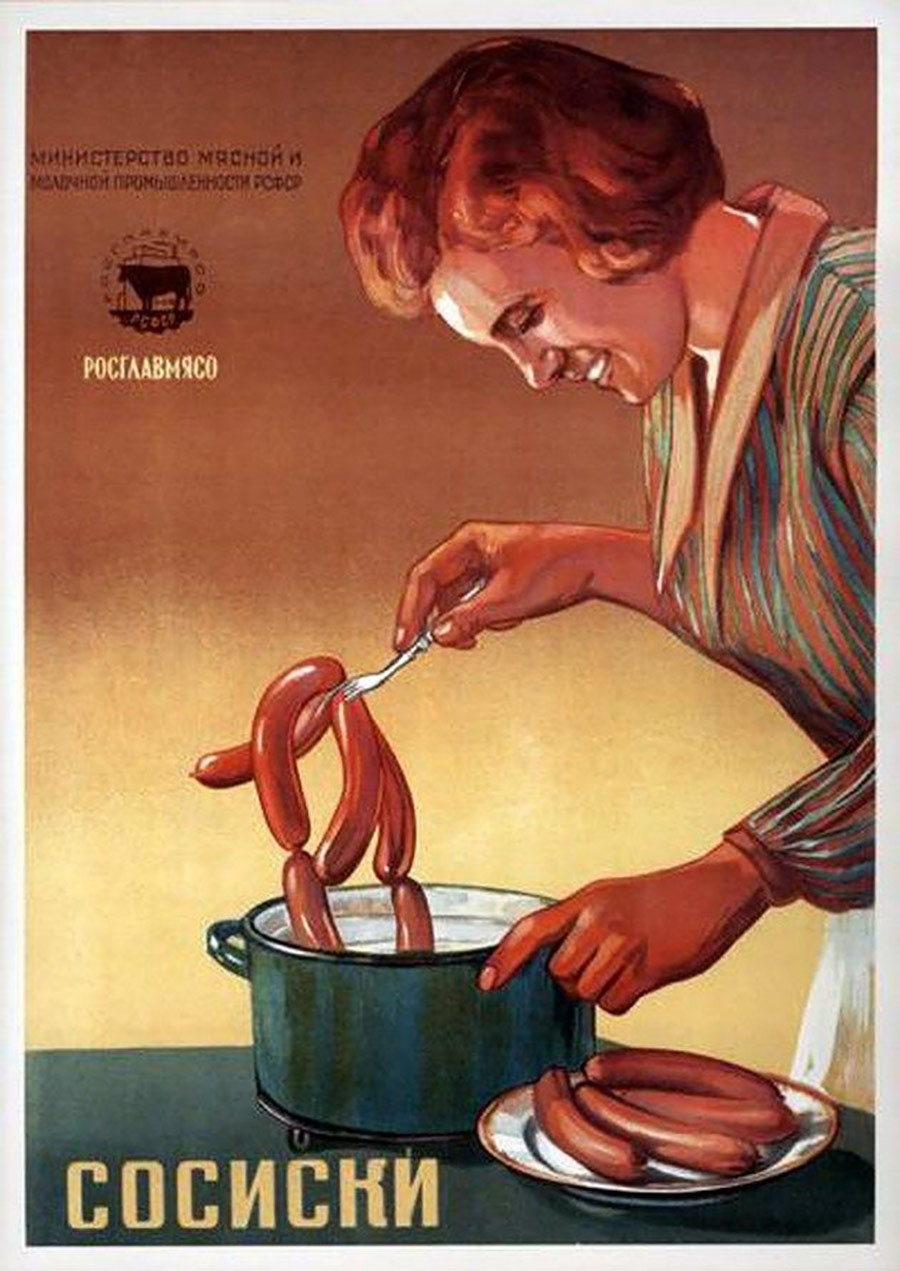 Because meat was scarce at times, meat-flavored stock cubes were recommended for making soup. 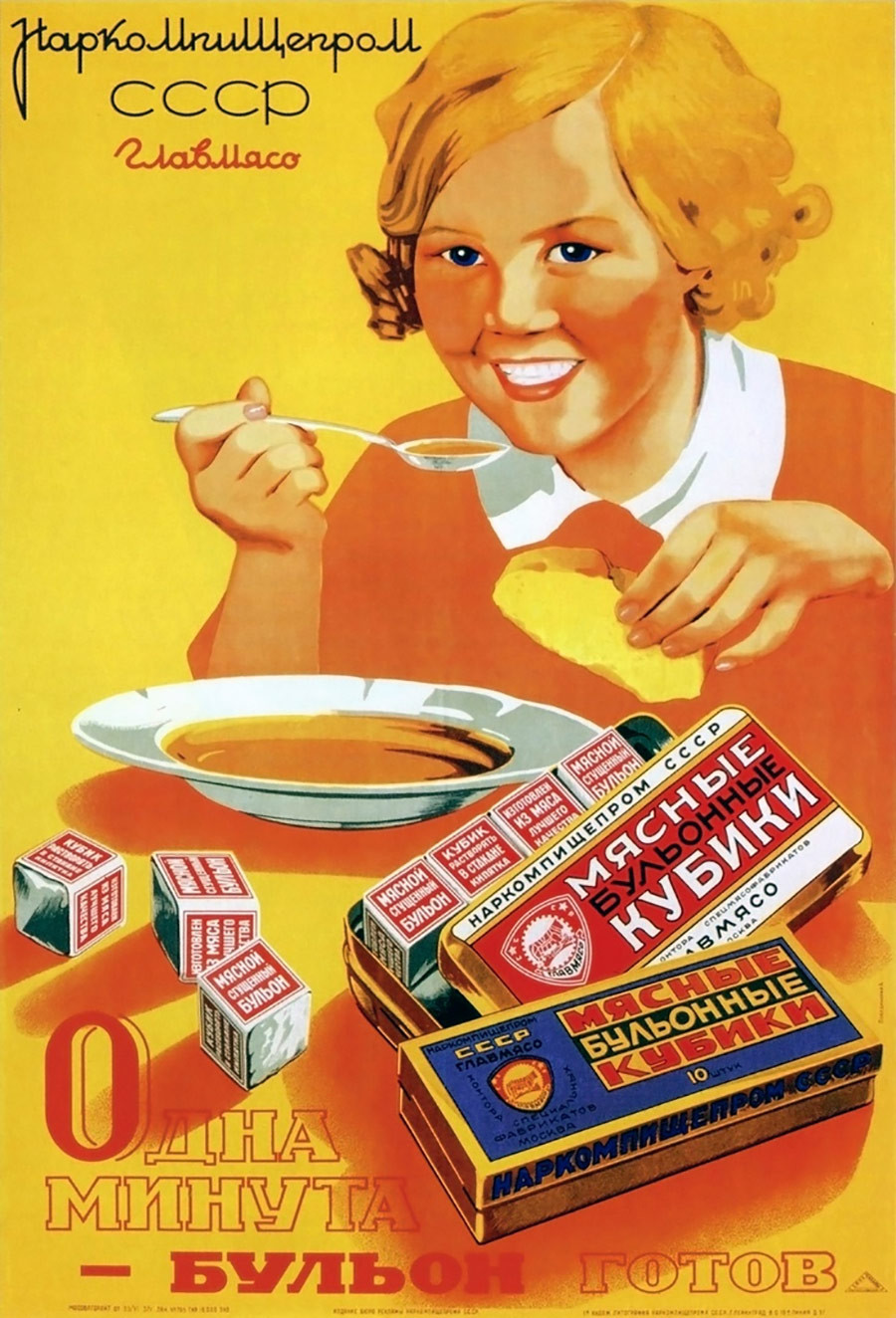 Soviet people adored tea, but it was rarely sold on its own; instead, there were tea beverages 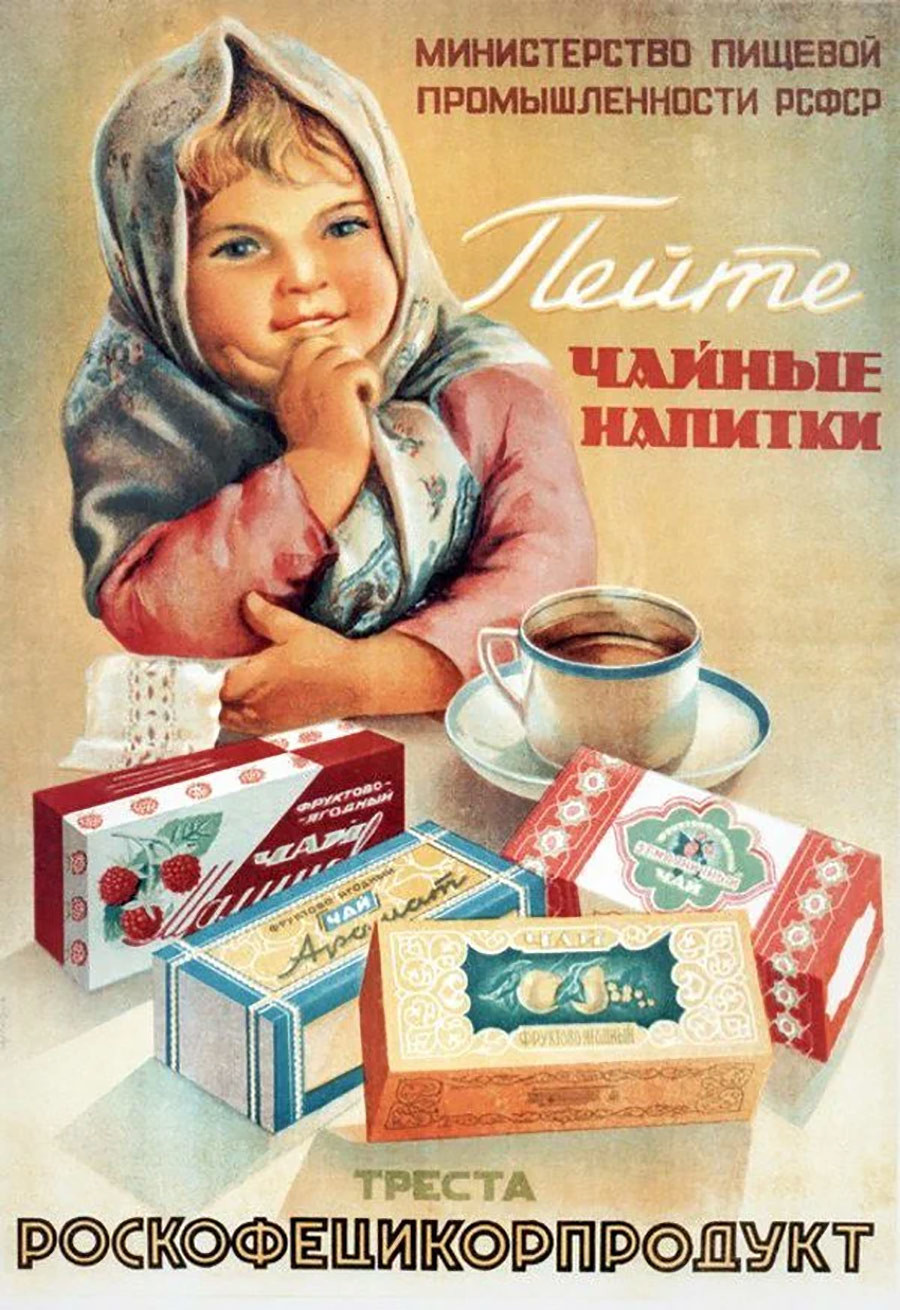 Tea could not be drunk without candies, of course, preferably the Krasnaya Oktyabr (Red October) brand 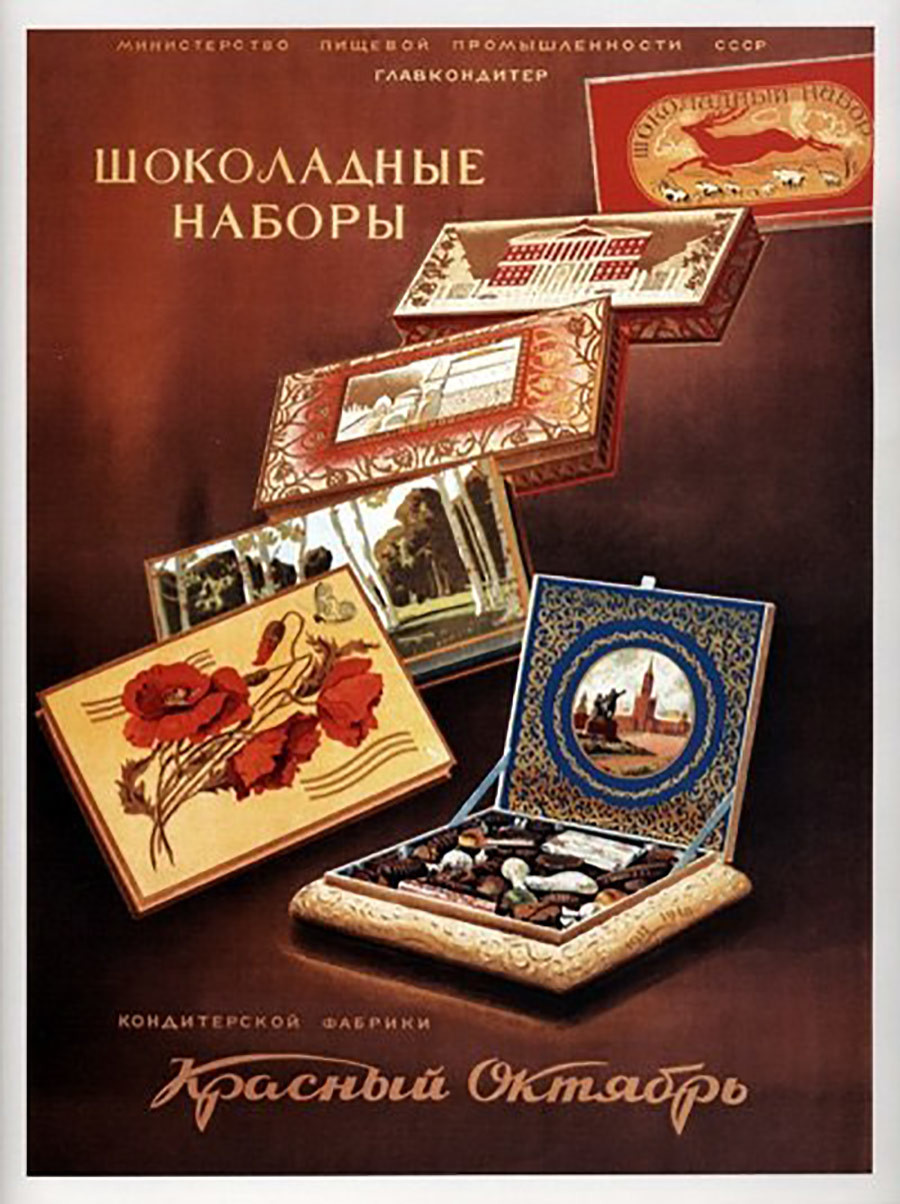 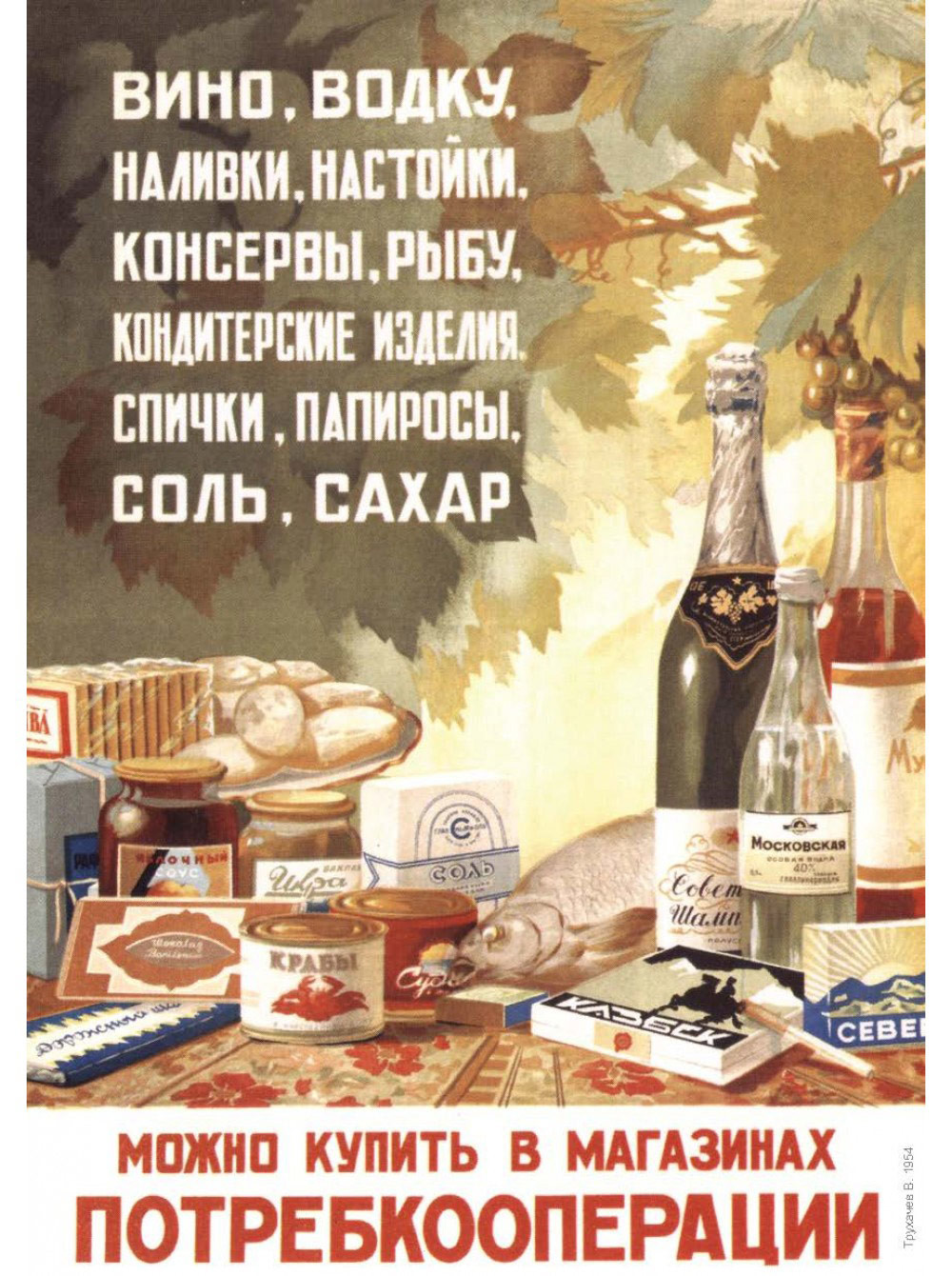 Rosglavpivo, the main Soviet brewery, instructed people to exert their rights and demand that the glass be filled to the 0.5 L line and not a drop less! 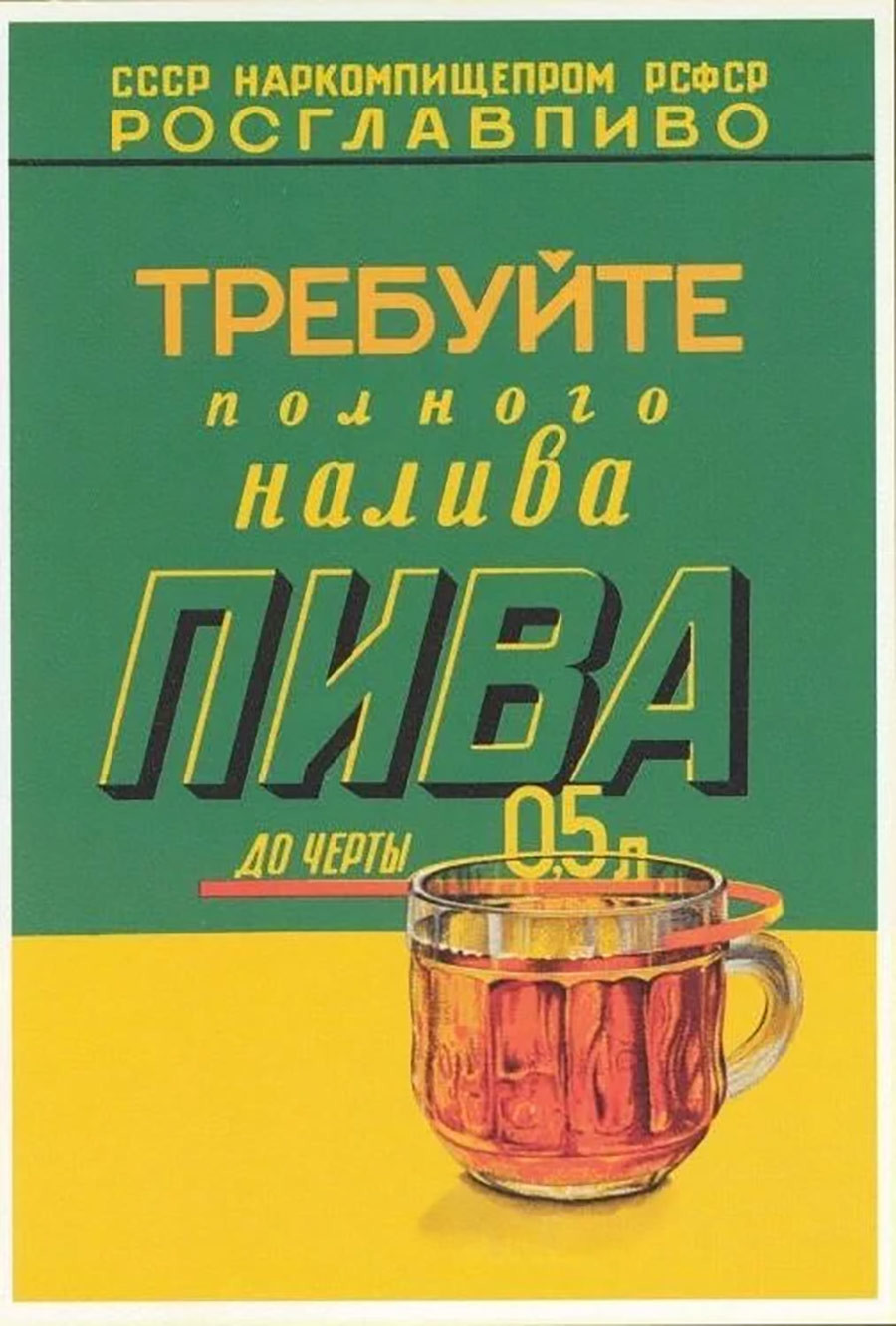 It also advertised other, uniquely Soviet drinks, such as Soviet porter and sweet "cream soda" 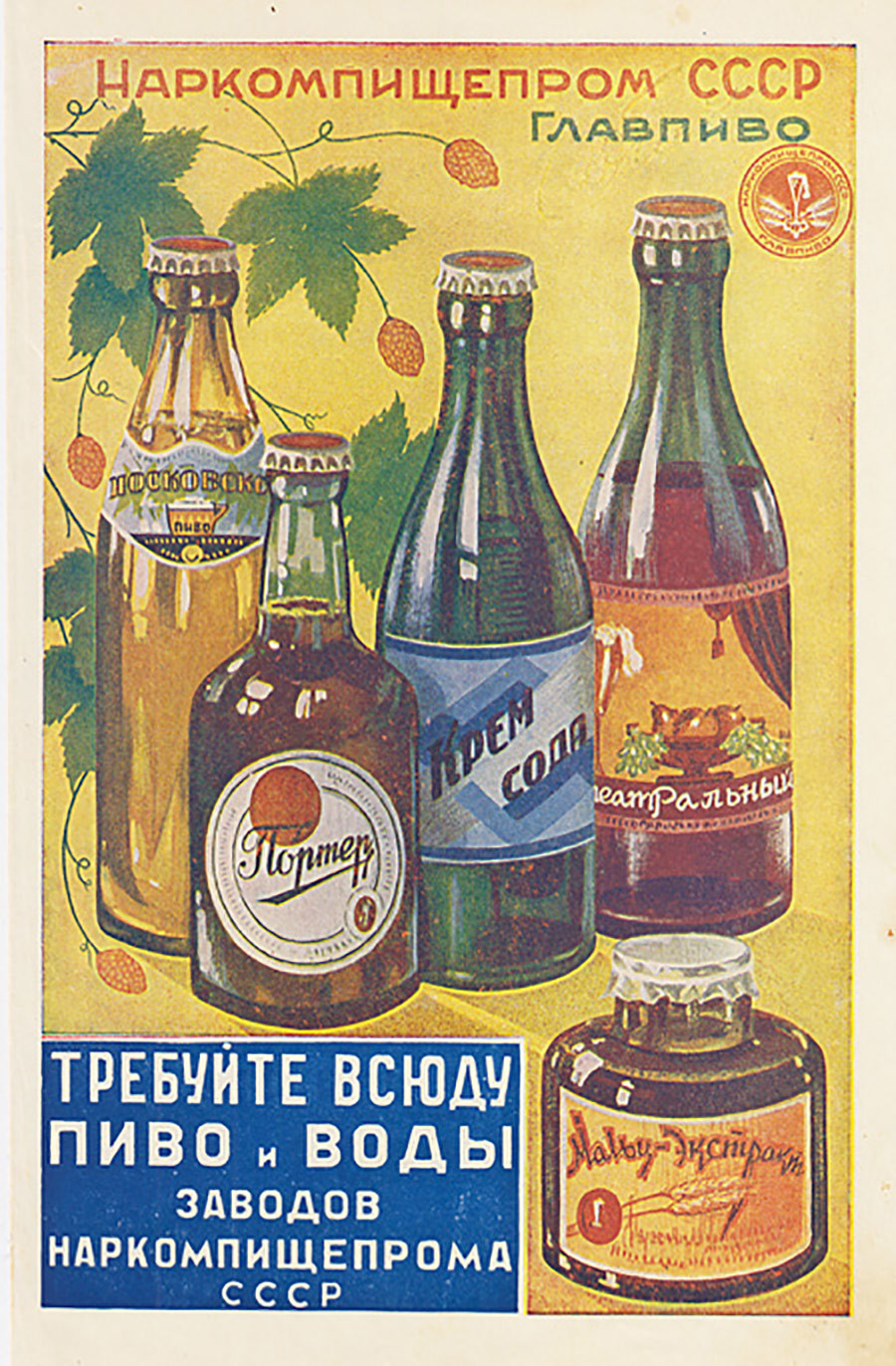 The Ministry of Food Industry even had a special department: the Main Directorate of Vegetable Oils and Fats. In the USSR, cheap margarine was very common and recommended as a butter substitute in baked goods. 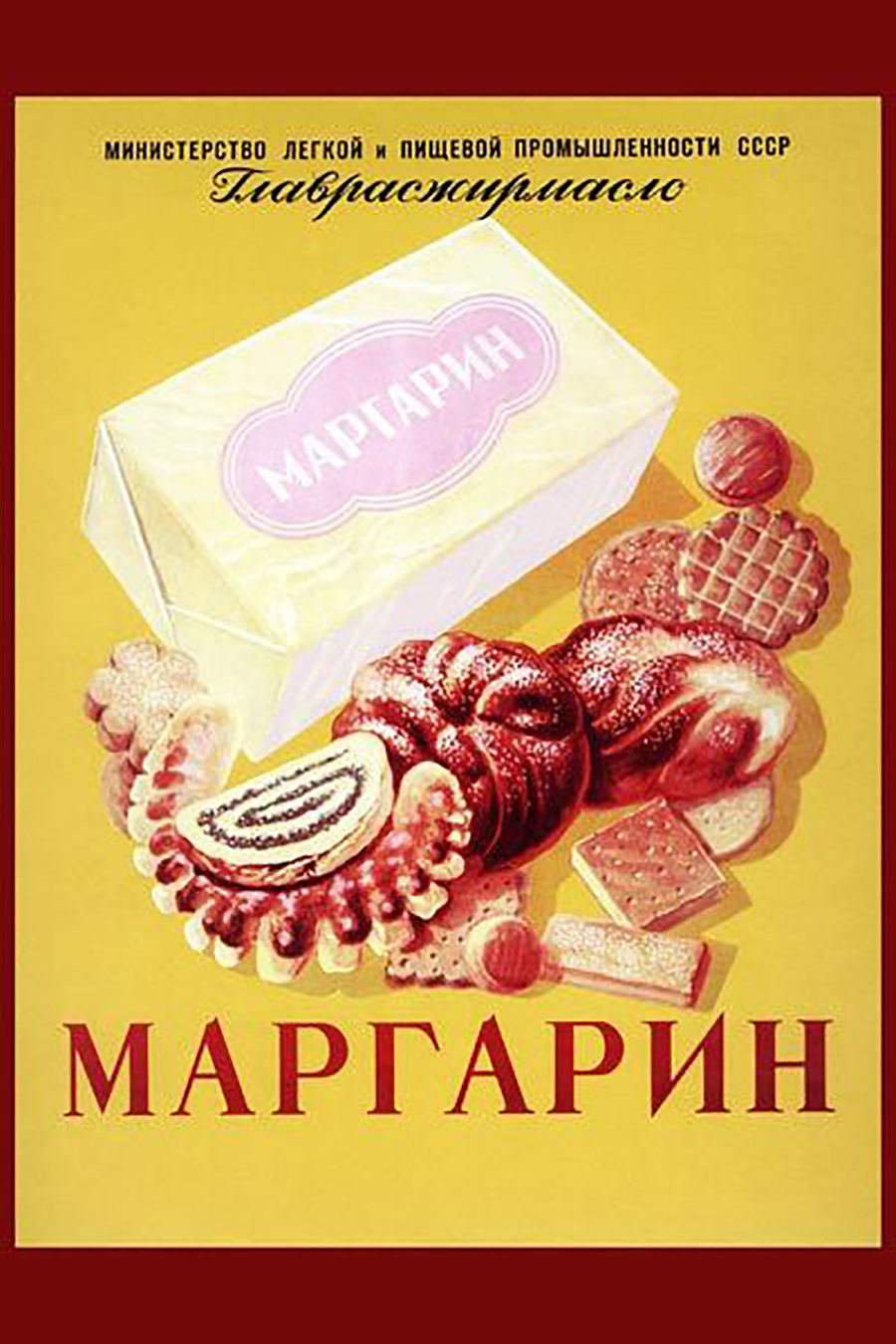 Many Soviet housewives made their own pelmeni (dumplings), but it was also possible to buy them frozen. The poster suggests serving them with vinegar and smetana (sour cream) — still a favorite combination for Russians. 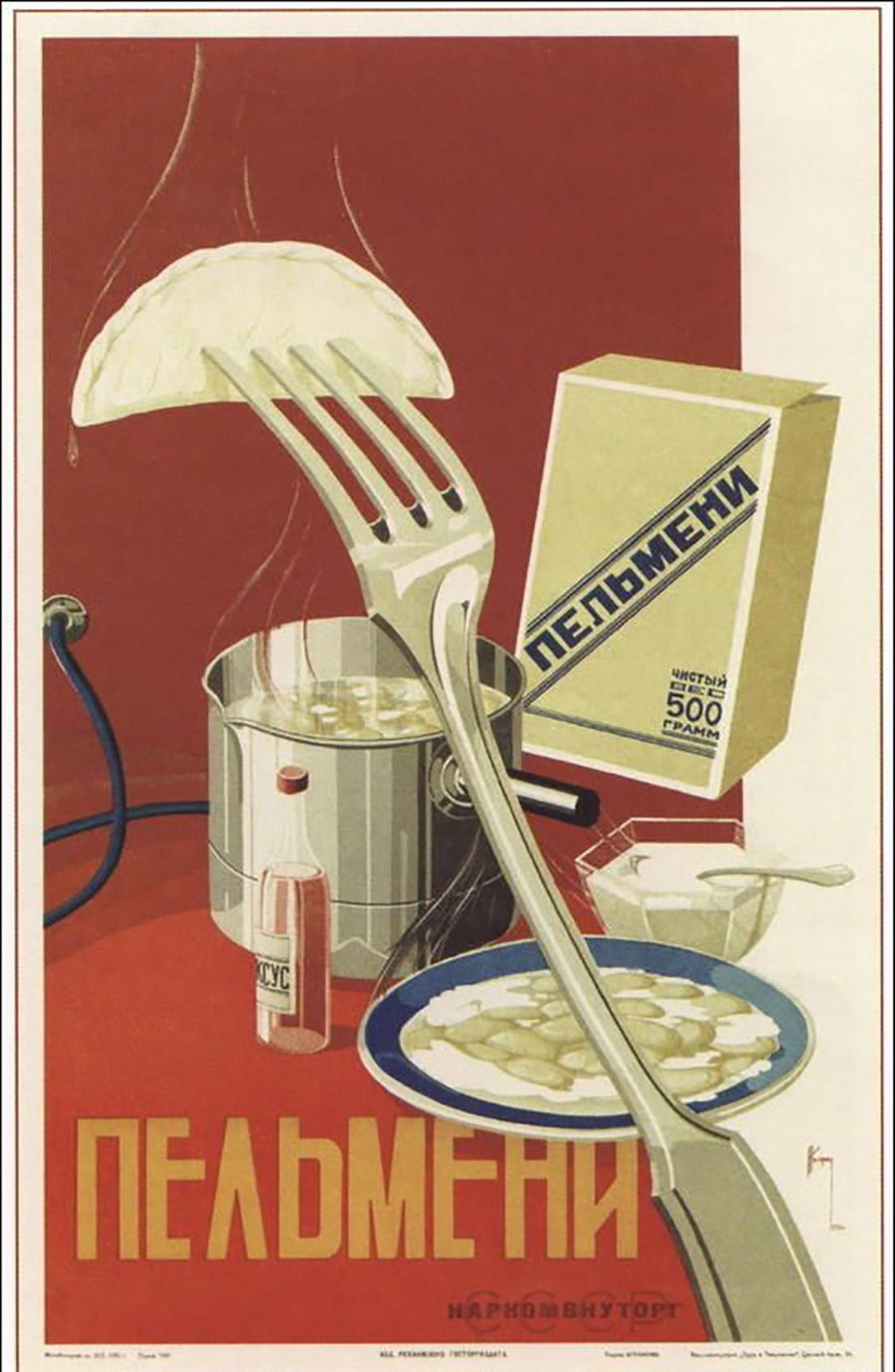 It was in the USSR that Russians got firmly hooked on mayonnaise, which goes well with meat and fish, and makes any dish tangy and tasty. As per the finest traditions of zero waste, mayonnaise jars were returnable. Who says Russians don’t recycle? 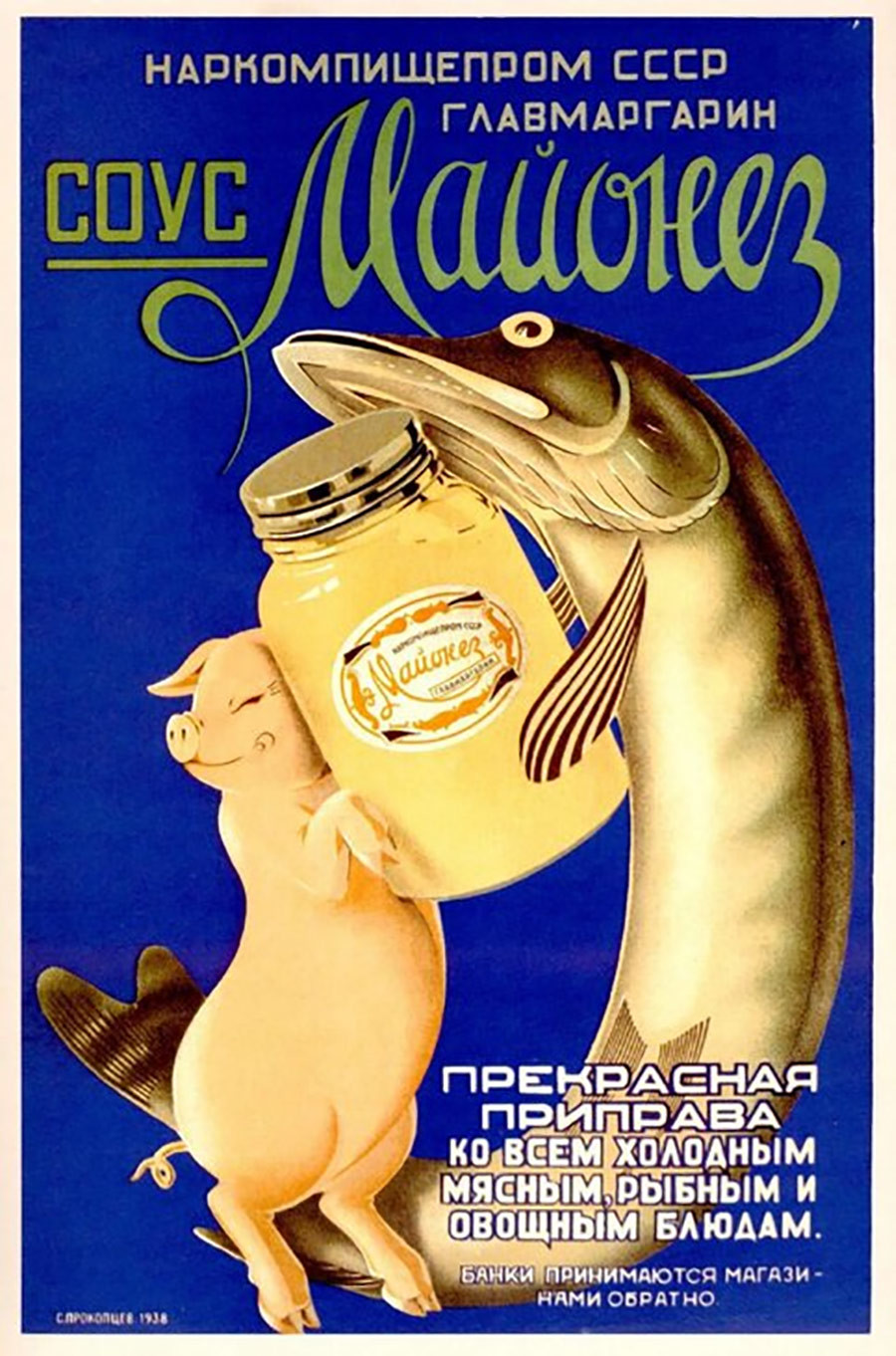 The main New Year's drink was Soviet champagne — the only sparkling wine in the world (besides the stuff from the French region of Champagne itself) to be called champagne. 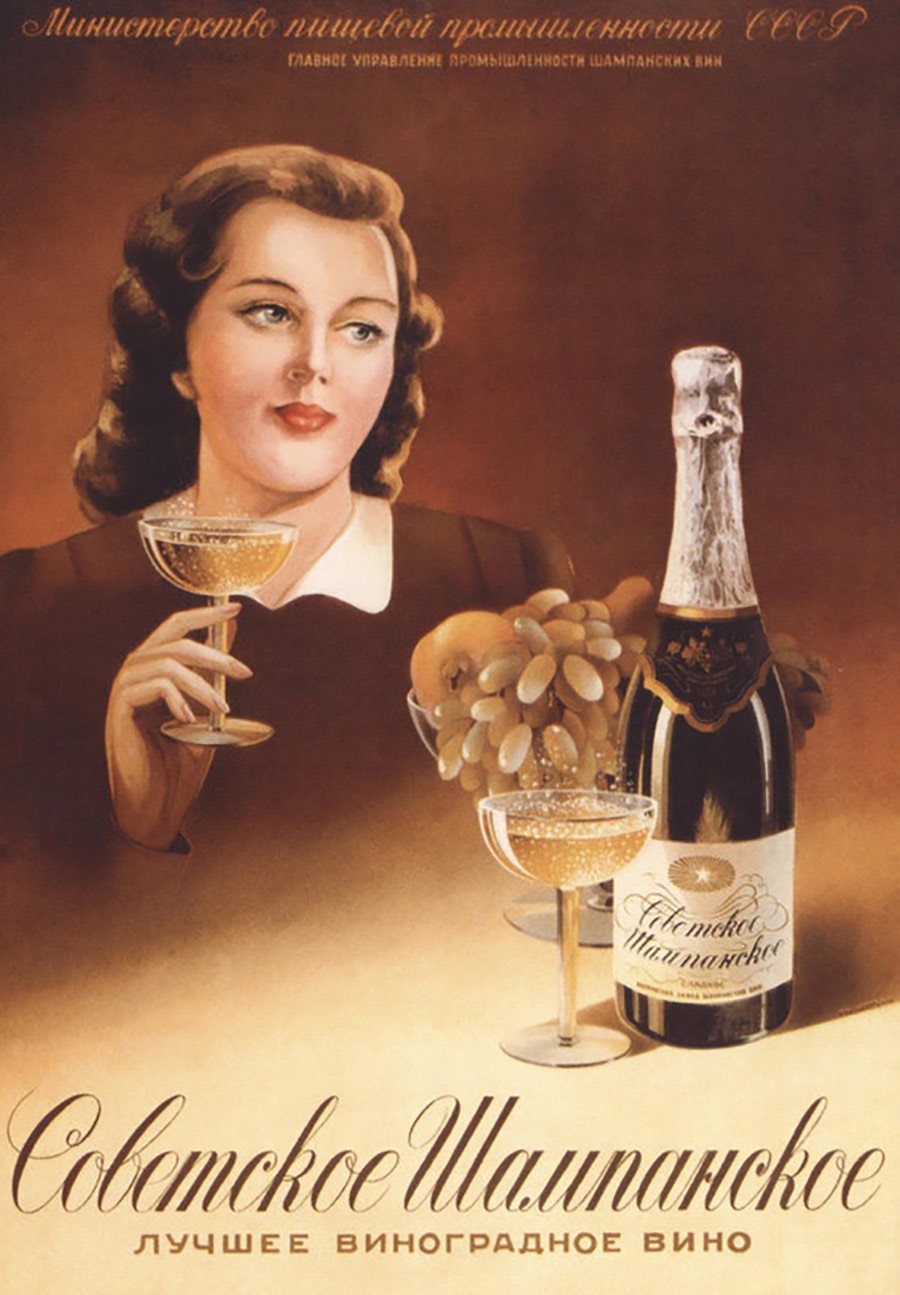 Did you know the USSR also had its own gin? Glavlikervodka, the producer, advertised it together with Zubrovka bitter liqueur and Starku strong rye vodka 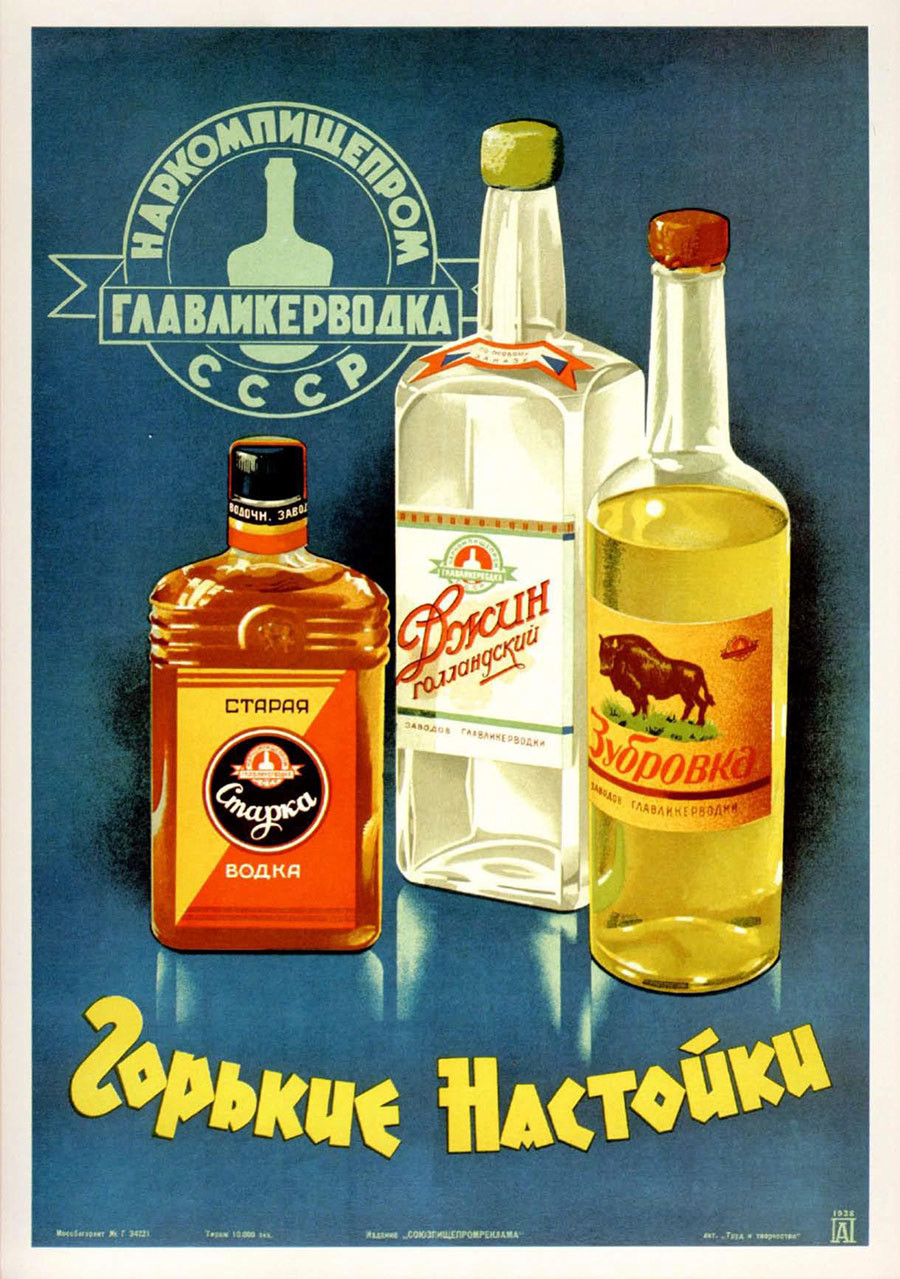 Apple jam was a favorite sweet of Soviet children. It could be spread on bread, spooned into the mouth while sipping tea, and baked into pies. 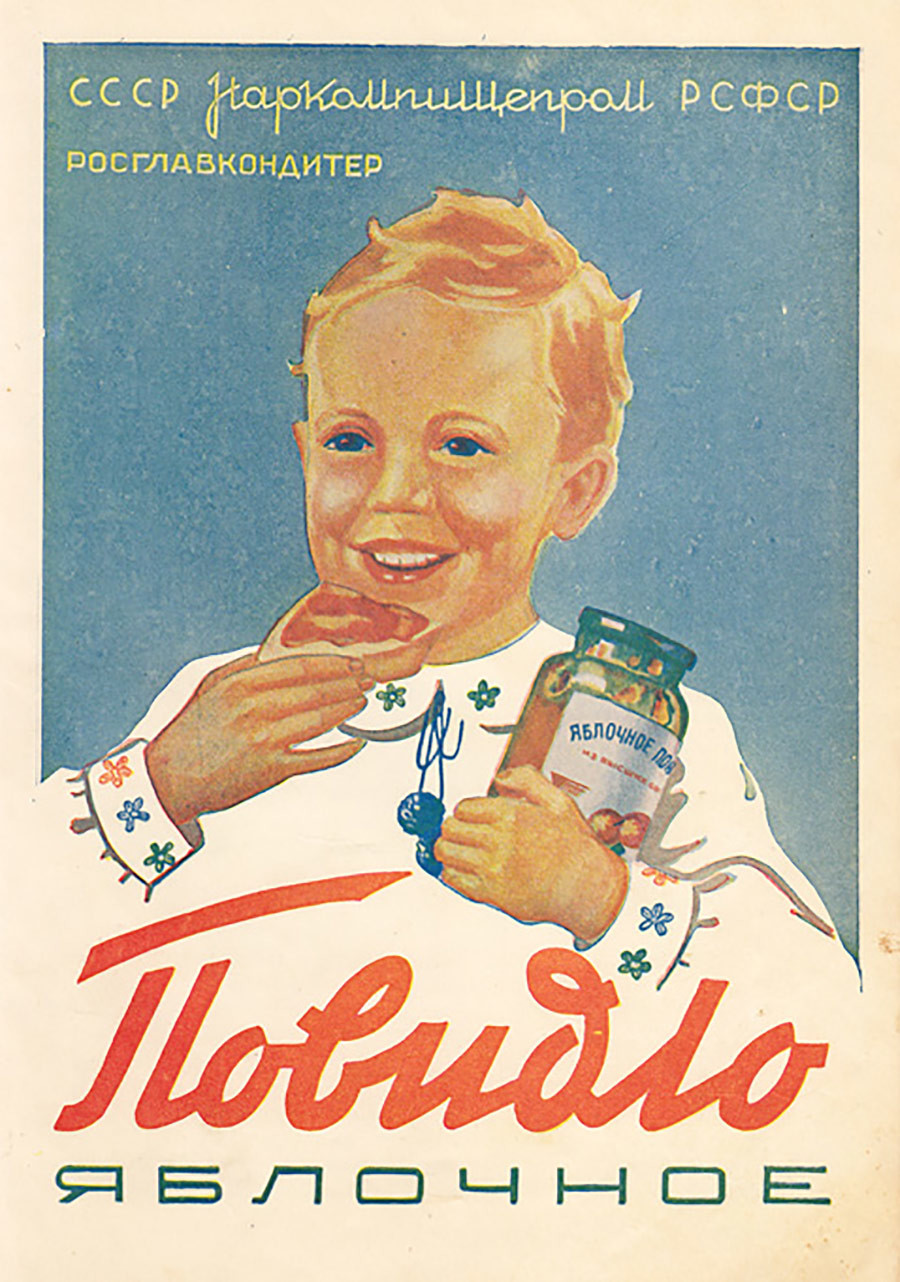 The USSR was not home to penguins... but it was to ice cream 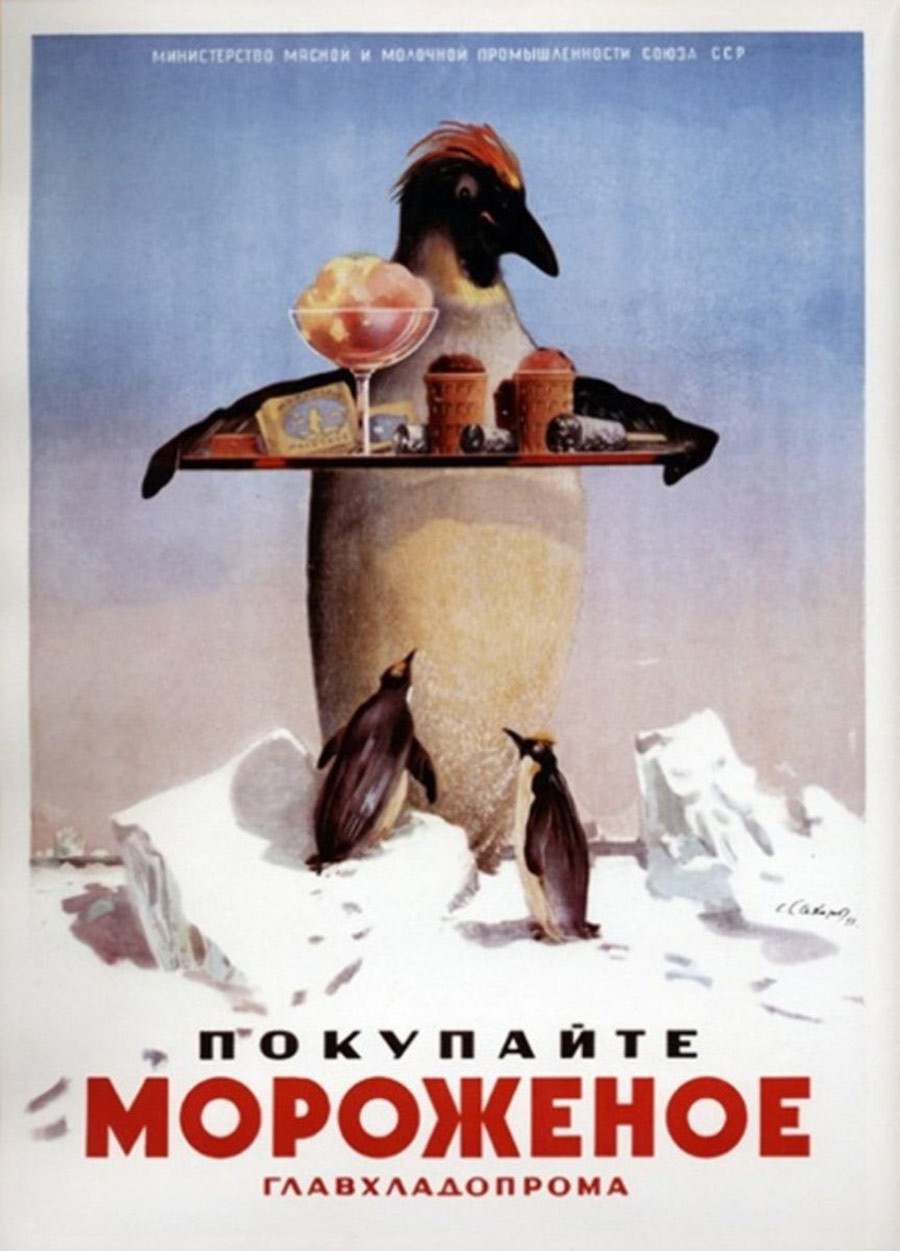 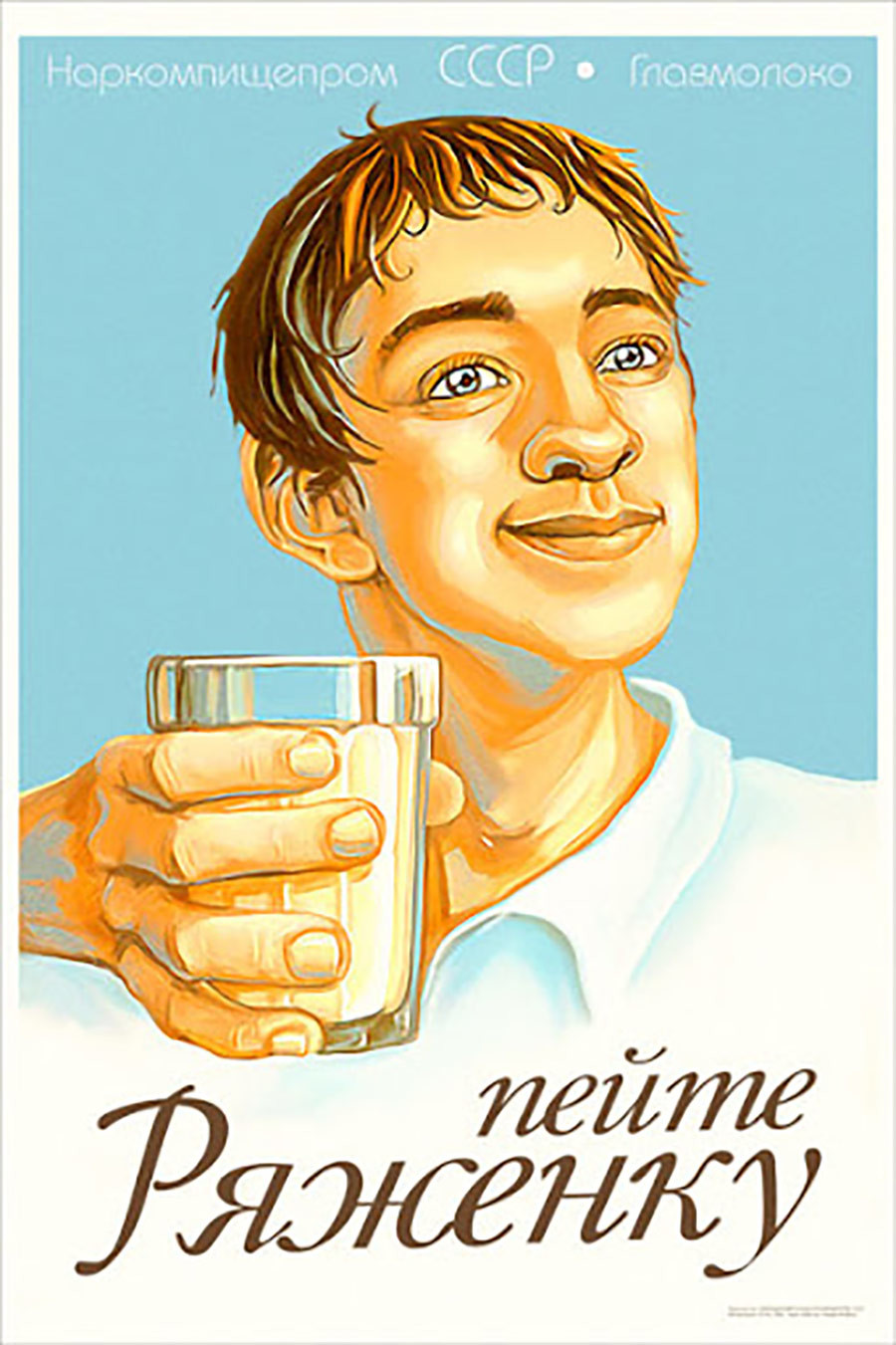