What were the most expensive and exclusive restaurants in the Soviet Union? 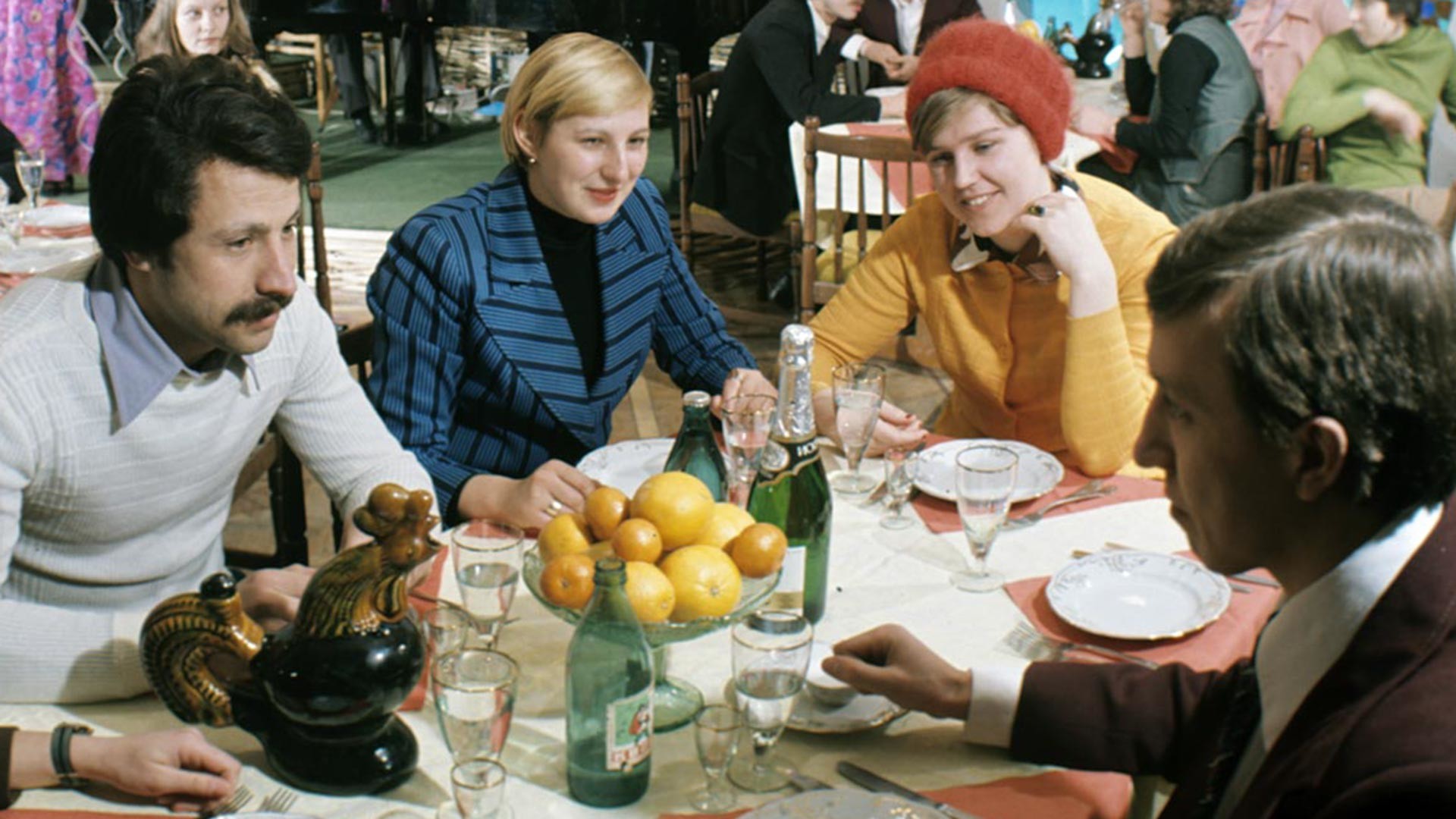 Nikolay Kozlovsky/Sputnik
Soviet citizens were offered crab en cocotte, skewered sturgeon and the chef's signature desserts, but the cost of the actual meal was not even the most expensive part.

Although the Soviet Union had a plethora of affordable eating establishments such as factory canteens and youth cafés, high-end restaurants stood out from the rest. They permanently had "fully booked" signs displayed on their doors and huge lines of prospective diners that stretched down the block. So how could ordinary people get into these establishments, and what could they afford to eat once they got in?

An entrance ticket that cost half a monthly salary 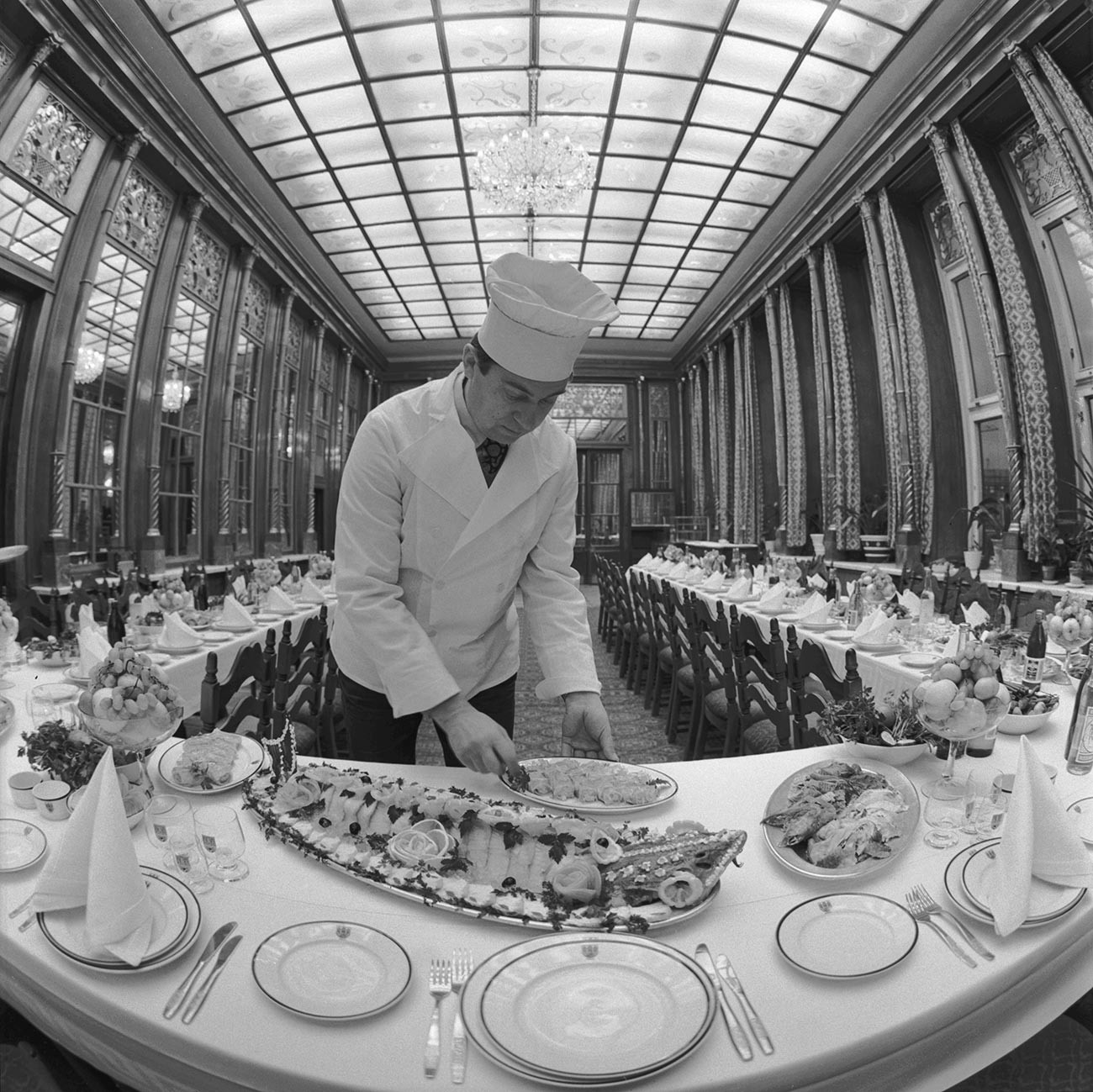 The Mirror Hall of the Praga restaurant.

If you look at old Soviet restaurant menus, the prices seem much cheaper than they are now. For example, in the 1970s-80s in the Astoria, one of the most high-end restaurants in Leningrad (St. Petersburg today), main meat dishes like shashlik or beef stroganoff cost between one and two rubles, while desserts and coffee ran 20-30 kopecks.

At the time, the average salary of a qualified professional was around 150 rubles.

In Moscow restaurants like the Praga (“the Prague”) on Arbat Street and the Aragvi on Tverskaya Street, a very good dinner for two cost between 10 and 15 rubles. But these relatively accessible prices did not mean that everyone actually had the opportunity to go there because getting a table could sometimes cost more than the dinner itself. During the day you could get a set lunch for two rubles without queuing, but to get during the evening you had to give the doorman at the entrance a tip. The unofficial fee to get into an ordinary restaurant ranged from one to three rubles, while for a good restaurant it was 10. And getting into an establishment like the Praga on a weekend could cost you up to 50 rubles. 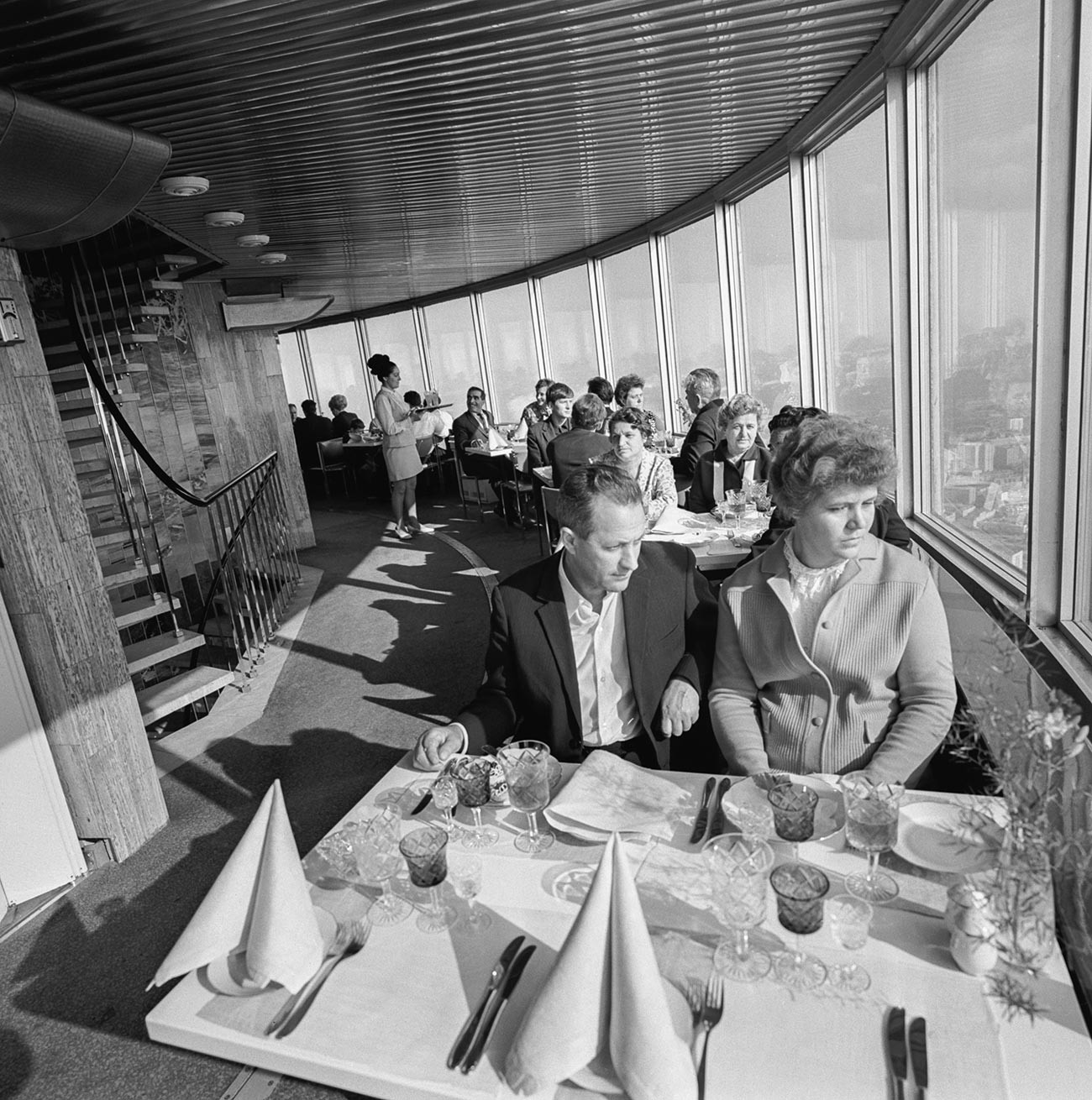 Moscow had one restaurant that you could only get into with a ticket and, what’s more, you could only spend a limited amount of time there. Seventh Heaven (Sedmoye Nebo) on the top of the Ostankino TV tower 330 meters above the ground was the highest restaurant in the Soviet Union. It also rotated, making a full turn every 40 minutes. The restaurant could accommodate no more than 80 people at any one time and so visitors needed a ticket to get in. The cheapest cost seven rubles per person. The menu was simple as can be: sandwiches, mayonnaise salads and breaded patties. For safety reasons, cooking was not permitted in the tower, and so food in the restaurant was only reheated. It was all very expensive: a set lunch cost around seven rubles, while a snack with alcohol could set you back 20.

"My father told me this story. He went to the restaurant with a colleague when they were on a business trip to Moscow. A modest snack and 100 ml of brandy each cost them 45 rubles. Today it seems laughable and neither here nor there, but in Soviet times it was very big money," one Muscovite recalls.

The fruits of the sea in an era of shortages 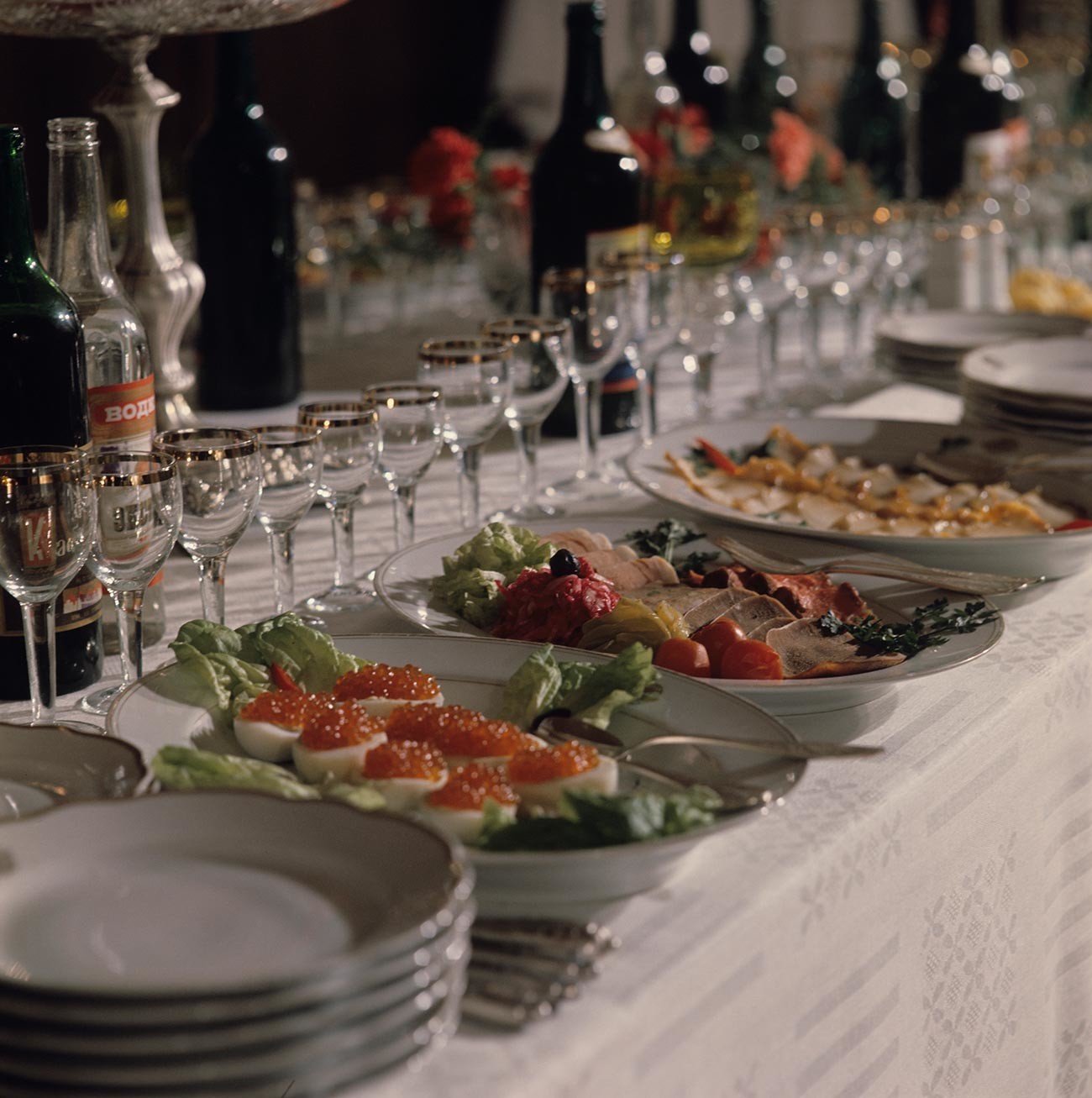 At the Metropol restaurant.

One common foreign stereotype is that Russians eat black caviar by the spoonful. Sadly, this is not the case and in fact fish dishes were always some of the most expensive items on restaurant menus, especially outside of the main cities. For instance, Sverdlovsk (now Yekaterinburg) had a very popular fish restaurant called Ocean that opened in the mid-1970s. At the time, the city's shops were blighted by shortages, but here everything was available: reasonably-priced baked salmon, sevruga consommé and healthy squid salads.

"On pay day we used to go to Ocean. Lunch cost around two rubles, for which we got two open pies with broth and a caviar and butter tartlet," one local recalls. 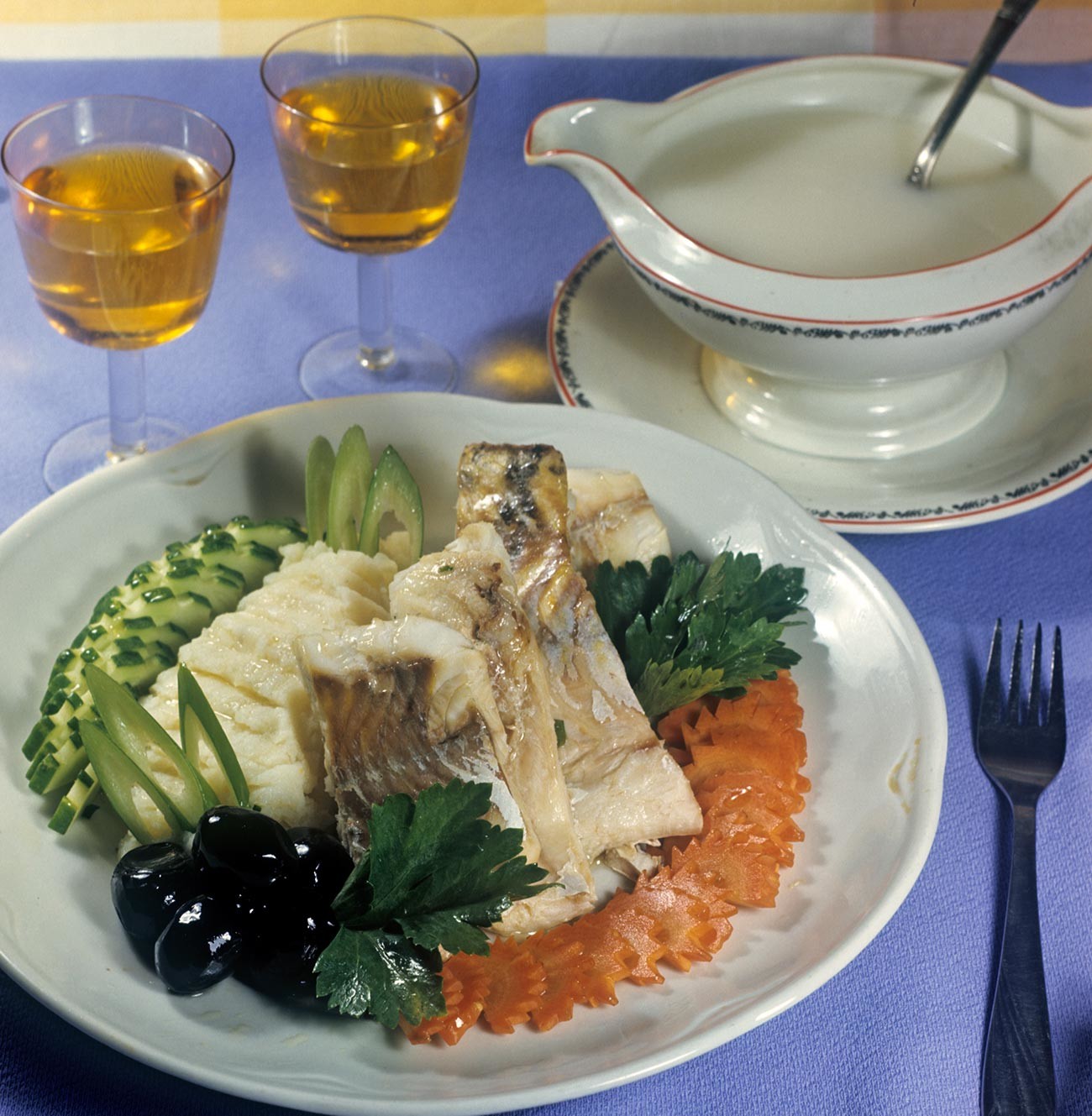 All dishes besides caviar cost no more than three rubles a portion. The restaurant’s special delicacy, "Sevruga caviar in a bowl made of ice," cost almost 16 rubles, which was an eye-watering amount at the time!

"Category I" for foreign tourists 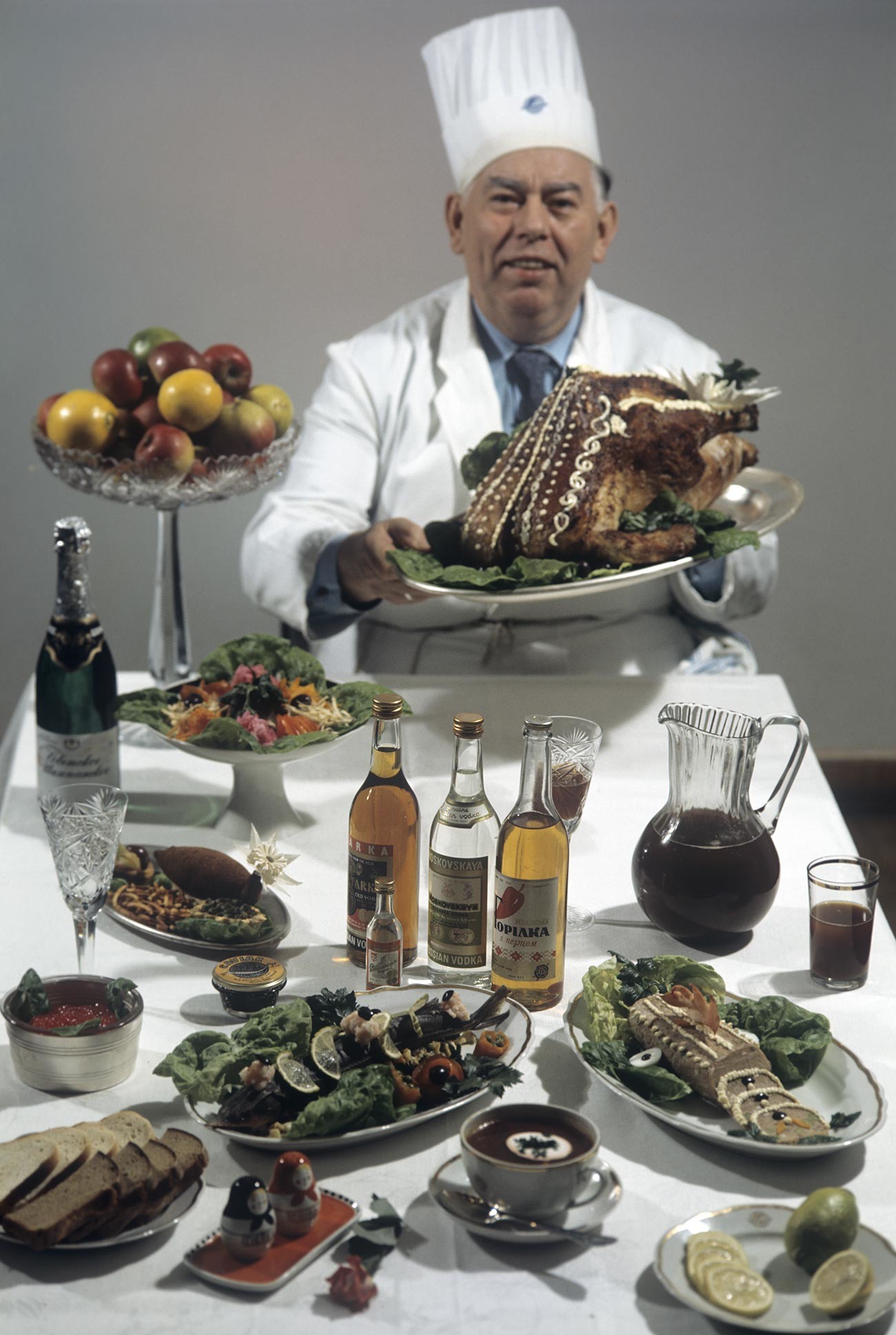 Certain establishments had separate rooms for VIP guests and foreign tourists. In addition to its ordinary menu, the Praga had a "Category I" menu on which a veal fillet with champignon mushrooms cost 30 rubles, pork cutlet Slovak style cost 20 rubles, while caviar with toast and butter was 54 rubles.

"My mother was celebrating a landmark birthday in 1990. It was difficult in those days to order a table in a good restaurant," one Muscovite recalls. "She worked for an important foreign trade organization, and a reservation was made at the Praga via their protocol department. We were classified as a foreign delegation. Of course, everything was tip-top. Alcohol was very expensive there, so we ordered the bare minimum—purely nominal amounts. I had a decent-sized bag at my feet filled with all sorts of drinks. As soon as everyone around the table had finished, I would get something out of my bag and put it out."

The restaurant was attached to the Intourist Hotel and intended exclusively for foreigners or guests on special invitations since payment was in hard currency. But you could sample skewered sturgeon and all sorts of appetizers with caviar there.