Soviet cakes named after cities of the world

Russian Kitchen
Anna Sorokina
Many cities have desserts that are named after them: New York Cheesecake, Milan Cookies and the Linzer Torte. But which cities inspired Soviet confectioners? 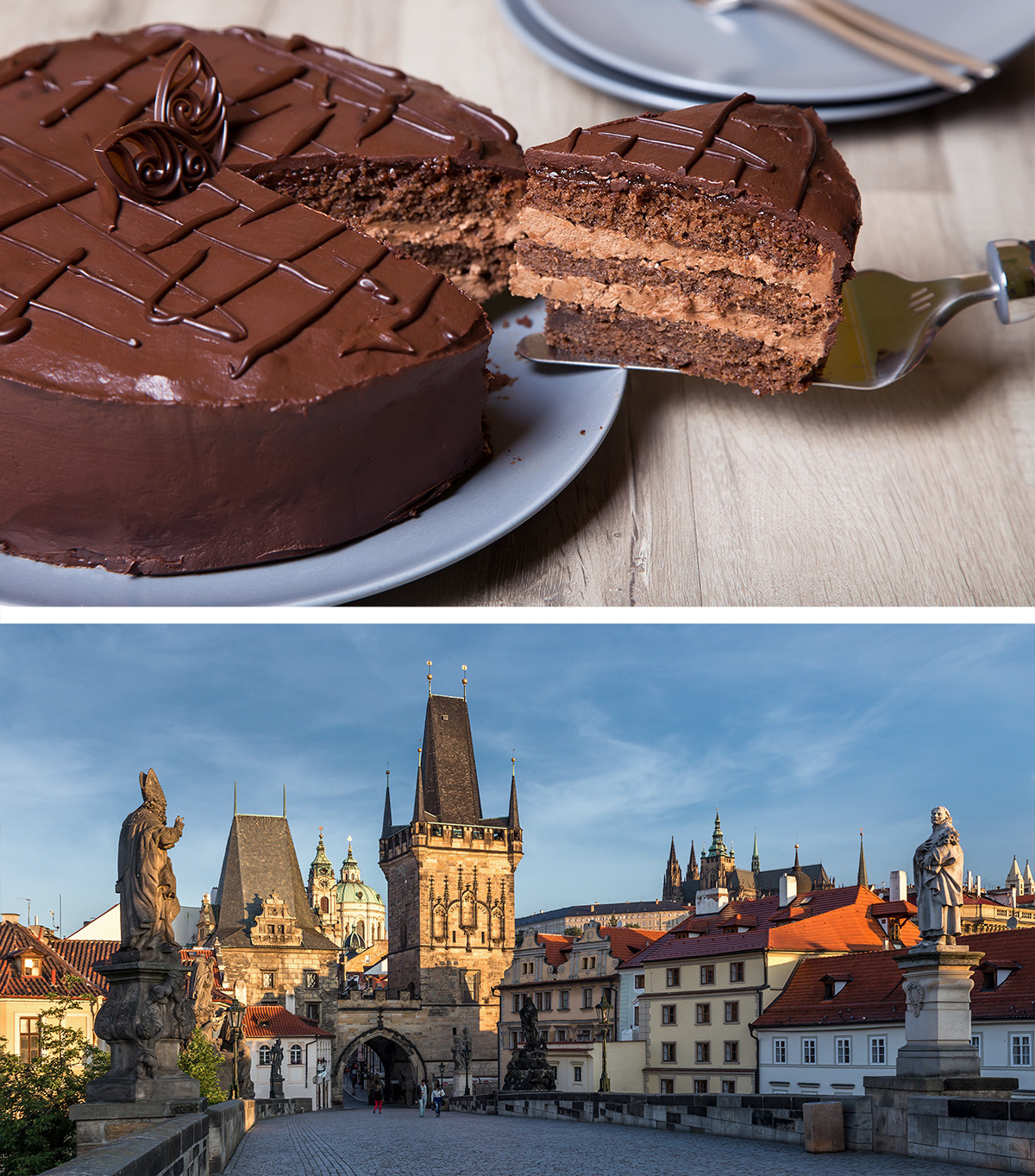 Until recently, you could find the swanky Prague Restaurant on Old Arbat Street in Moscow. It was famous, first and foremost, for its cakes. This was where in the 1950s and 1960s its head pastry chef, Vladimir Guralnik, created the recipes for what would become themost popular Soviet desserts. These included Bird's Milk Cake, Wenceslas Cake and the Czech Roll—desserts that are familiar to anyone born in the Soviet Union. And, of course, there was the legendary Prague Cake, named after the Czech capital, which is where Guralnik studied confectionary-making in his youth. It still remains one of the most popular desserts in Russia and across the former USSR.

The funnything is that the city of Prague doesn't actuallyhave such a cake. In taste, it is most similar to Austria's Sachertorte, but the recipe is different. Prague Cake is simpler and uses condensed milk. It consists of chocolate sponge layers spread with apricot jam and chocolate butter cream and is then coated with a delicate chocolate glaze. And there is no liqueur in the Soviet cake, although homemade versions come in different variations. 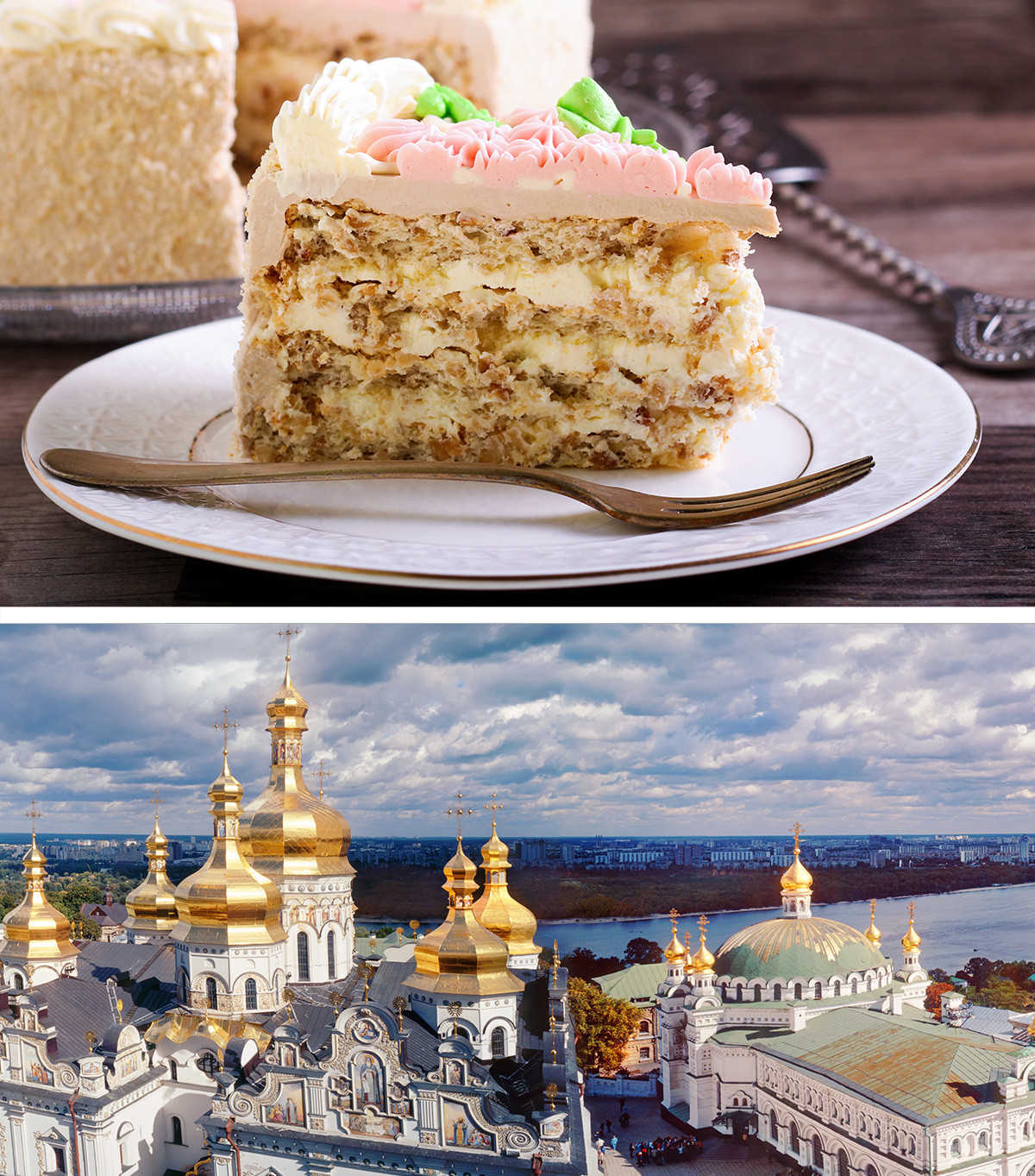 This light nutty meringue cake was invented at a Kiev confectionary factory in 1956. The recipe was devised by Konstantin Petrenko and Nadia Chernogor. Nadia was just 17 at the time and had just begun studying confectionery making. One timeshe forgot to put some egg whites in the fridge and, to avoid being told off for wasting food products, she used them to make cakes with a layer of butter cream. Before long, her invention went into wide scale production, and the cake was named after the capital of the Ukraine. 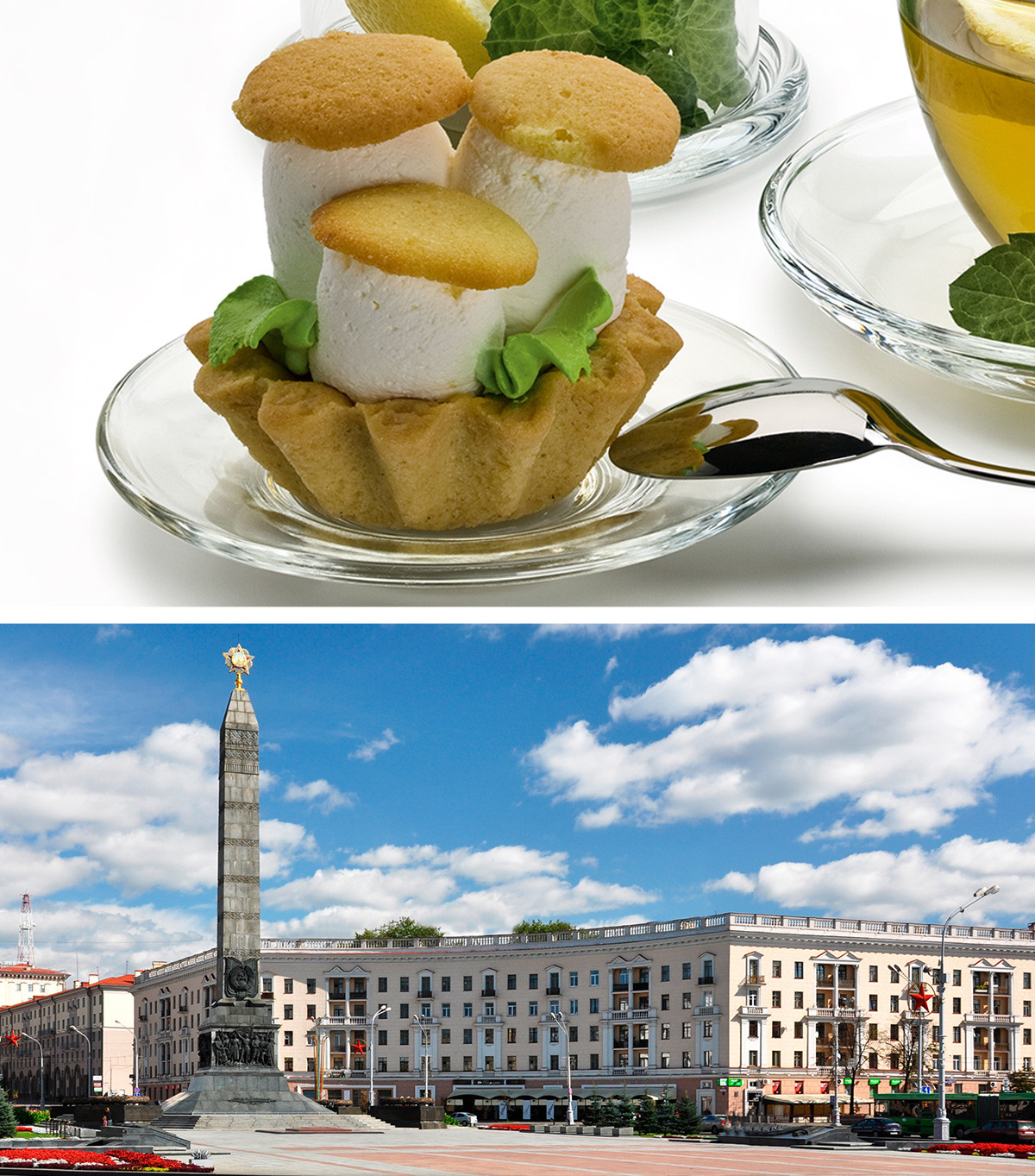 This fruit shortcake is named after the capital of Belarus, where it has been produced since the 1970s. But it is more popularly known as Little Mushrooms Cake or Autumn Cake since it looks like a forest clearing that’s decorated with "mushrooms" made from white butter cream and green "leaves." These days you won't see it so often, but practically every shop or cafe offers a smaller version of Minsk Cake – short crust tartlets topped with "little mushrooms." 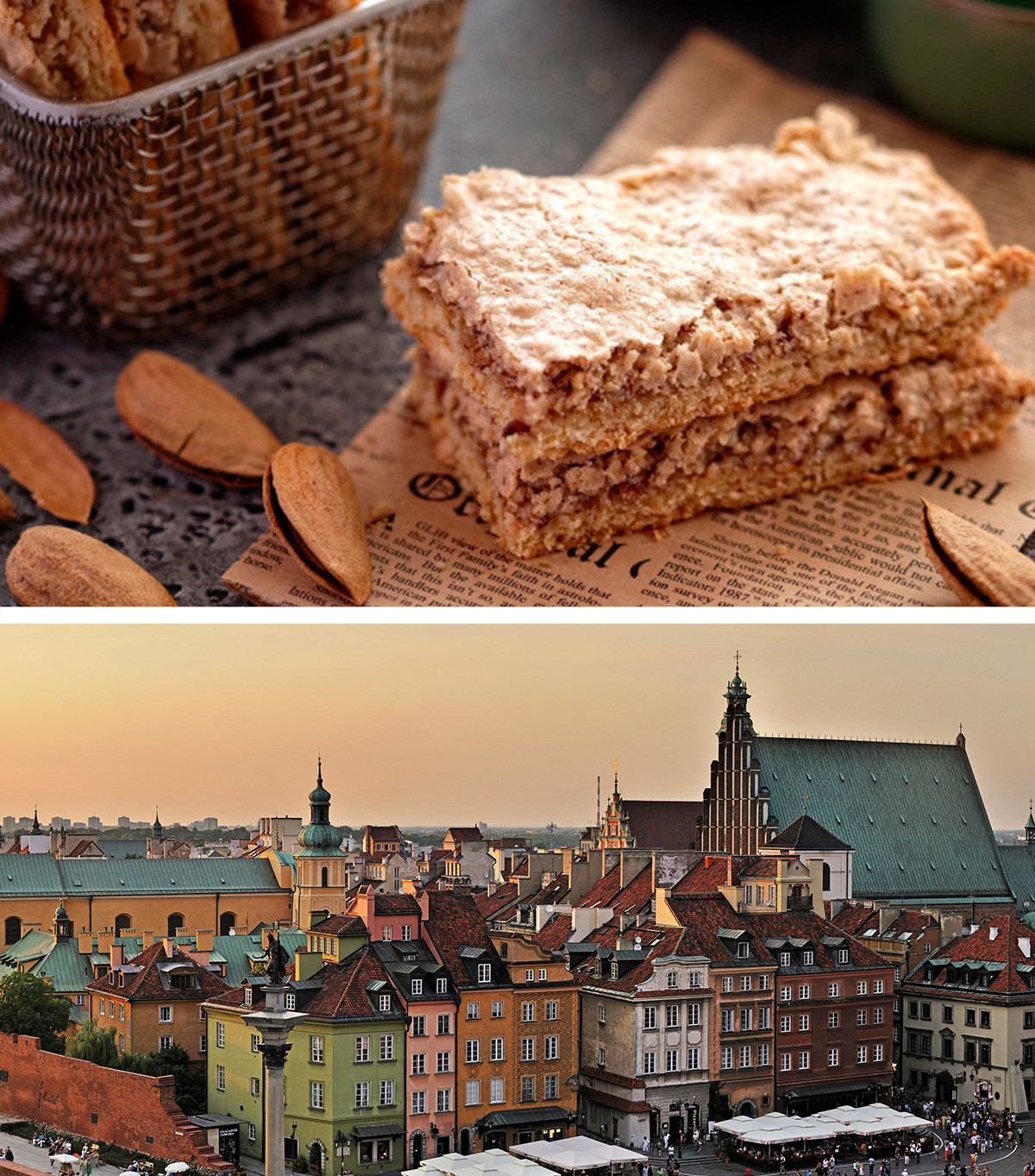 In the mid-1950s at least two cakes named in honor of Poland made their appearance in the USSR. Poland was one of the key members of the Warsaw Pact.

The cakes were virtually identical. Krakow Cake was a short crust rectangle topped with almond meringue, and Warsaw Cake was the same but included fruit jam between the layers. Sadly, and undeservedly, these delicious cakes have been largely forgotten today. 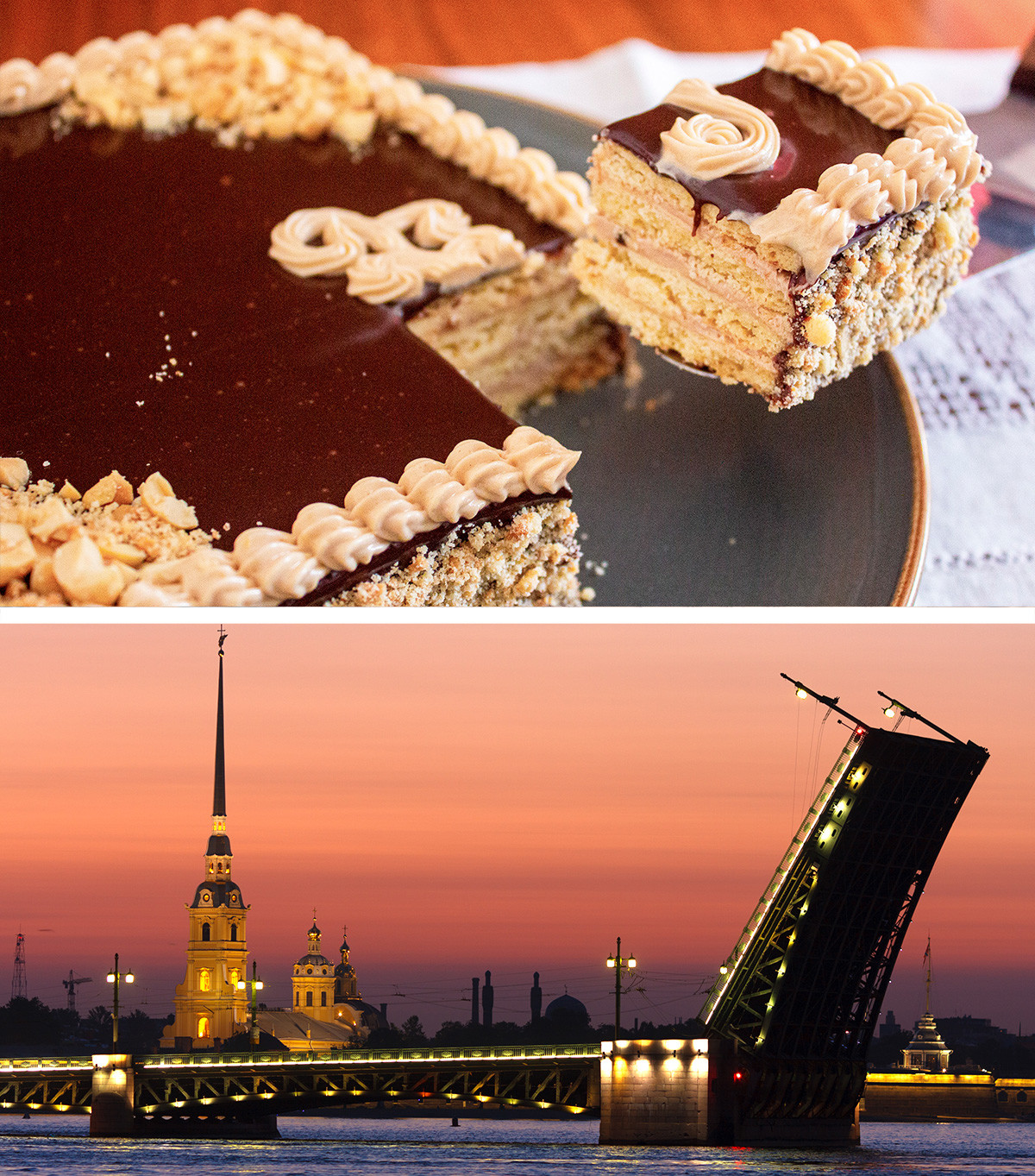 This was one of the most beloved Soviet cakes, and everyone with a sweet tooth was always on the lookout for it. Its recipe was approved in the early 1960s. It is believed that it was meant to compete with Kievsky Cake and therefore was named after the great city of Leningrad (now St. Petersburg).

The cake consists of layers of shortcake and chocolate buttercream that are injected with brandy. The top of the cake is decorated with buttercream flowers and chocolate fondanticing. In Soviet times, it was so popular that is would sell out as soon as it appeared in the shops! But today you can buy and taste this legendary cake in many cities across Russia. 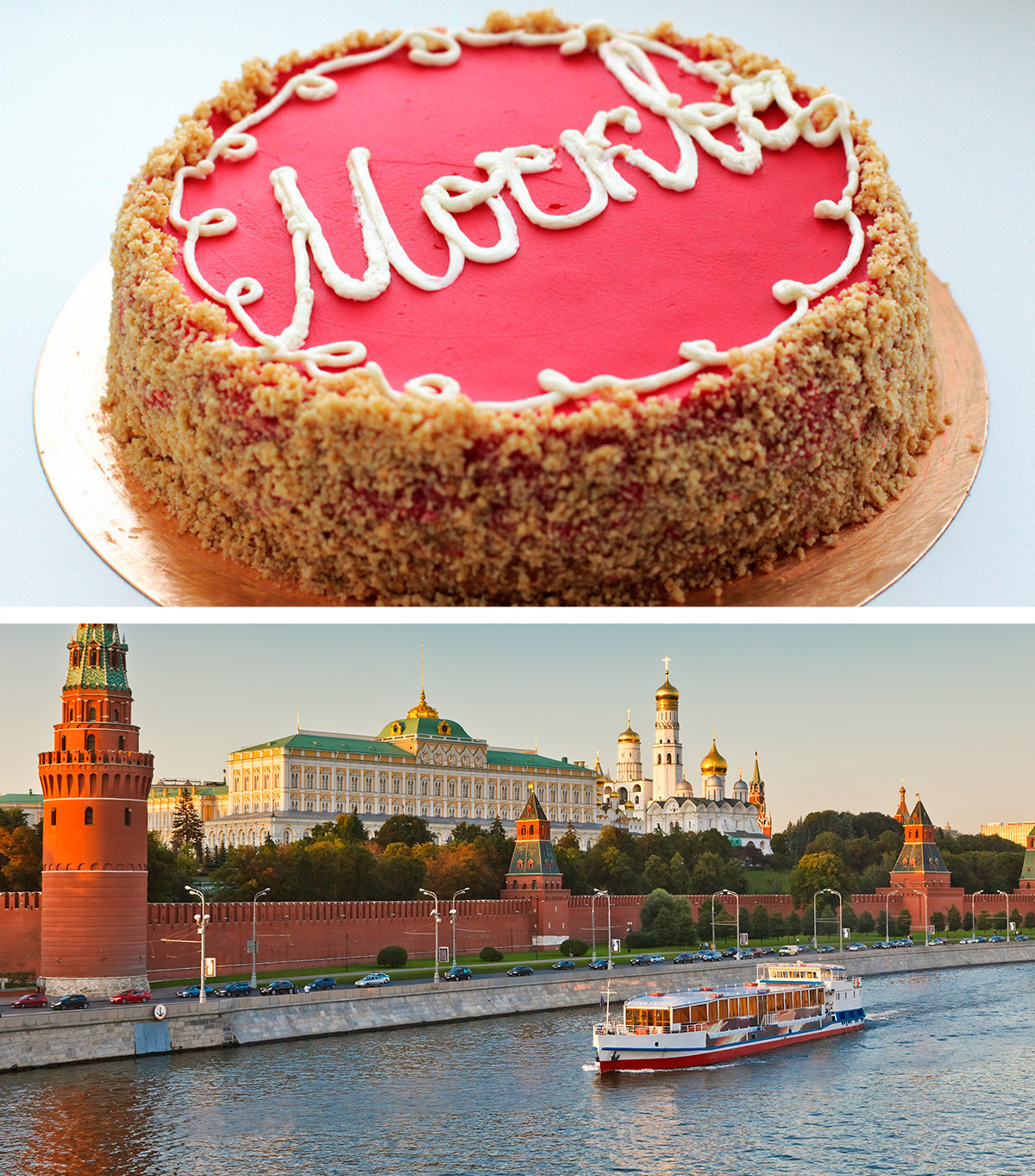 Quite a few of dishes, ranging from salads to sweet buns, were named after the Soviet capital. And in the early 1950s, the city acquired a Moscow-branded raisin cake with powdered sugar. The cake was even included in the space diet for cosmonauts.

There was also a gateau-type Moscow Cake consisting of three layers of sponge steeped in chocolate and strawberry buttercream. But this wasn't as popular as the Leningradsky or Prague cakes and has largely been forgotten altogether. As a result, until recently Moscow was left without a cake bearing its name!

It was only in 2015 that Moscow pastry chefs decided to rectify this injustice. They devised several cakes and asked Muscovites to choose which wasbest. In the end, 200,000 people voted for this one, made with hazelnut layers and condensed milk. Today you can try it in any Moscow cafe, pick it up in a store or even make it yourself.