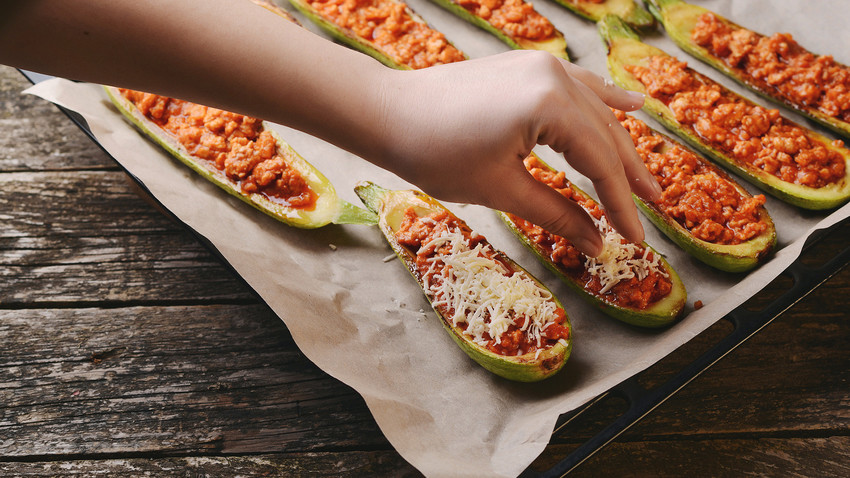 How to cook squash à la russe: from a savory snack to a flamboyant breakfast.

Legion Media
Since this is one of the few vegetables that Russian dacha-goers have in abundance, there is no shortage of squash-based recipes. We share the best five.

Before stuffing, the squash is usually cut into rings 2-4 cm wide or into “boats”, where it is sliced into two equal parts and the middle cut out for the filling (small cylindrical squashes 15 cm long are best suited for this). If your squash season is in full swing, you will have a choice of shape and filling. So get deciding!

This homemade dish has long been a classic of Soviet/Russian cuisine. Besides minced meat, you can add tomatoes, rice or other home-stocked cereals to the filling. 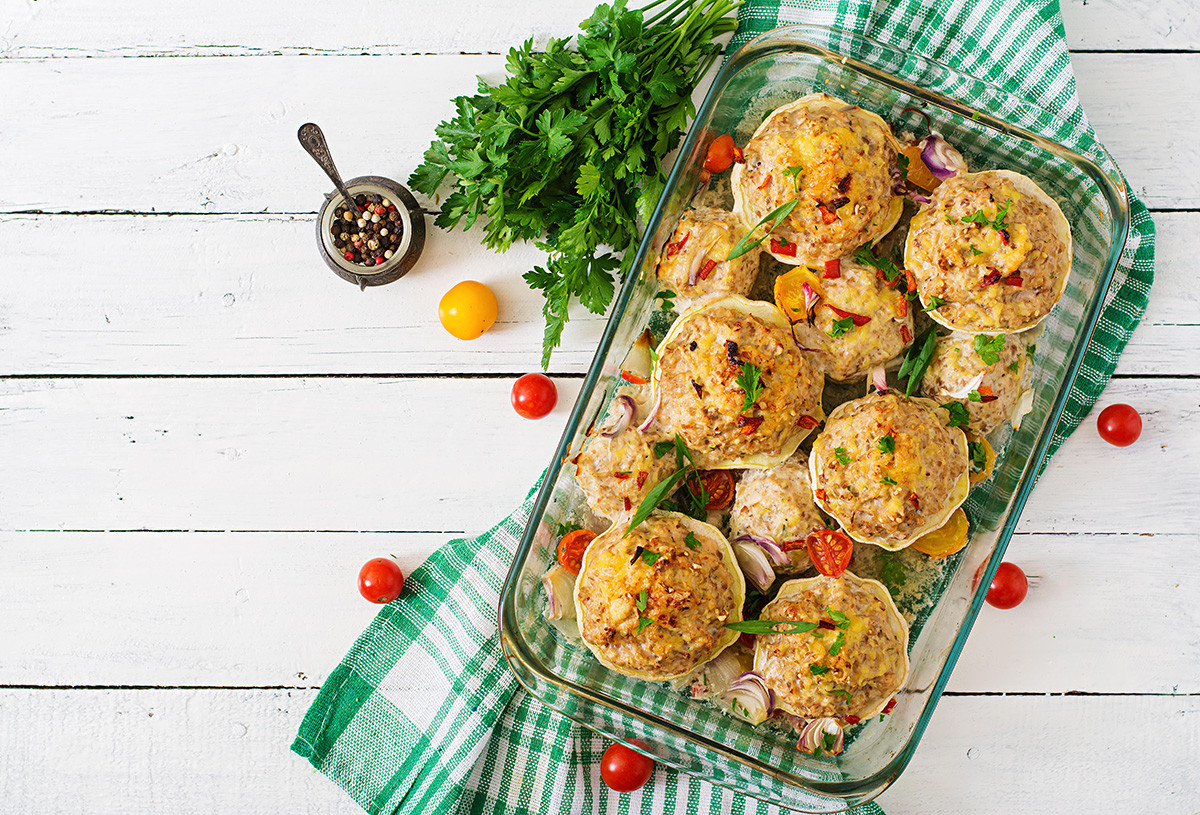 Recipe: Boil rice (20 g) until half-cooked. Dice half an onion, grate one medium-sized carrot, fry everything in vegetable oil. Add two diced tomatoes, season with salt and pepper. Thrown in the rice and chopped herbs. Mix everything, salt if necessary. Slice one large or two medium squashes into rings 4 cm wide, cut out the middle. Place the squash(es) on baking paper and stuff with the filling. You can cover it with foil or smear with smetana/mayonnaise or sprinkle with grated cheese. Bake in a preheated oven (180°C) for 25 minutes.

Traditional julienne (mushrooms in a delicious creamy sauce under a cheese crust) is served in a special dish known as a cocotte, but this can be easily replaced with a squash. 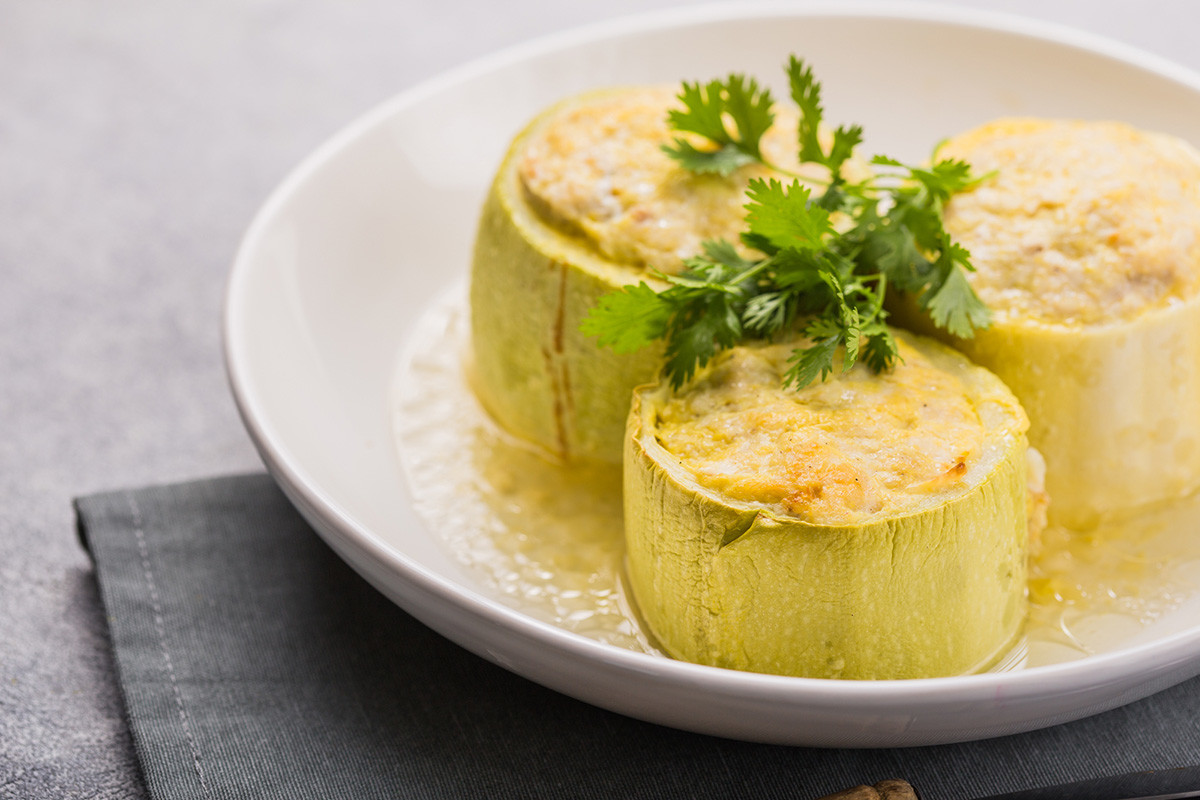 Recipe: Cut two medium-sized squashes into 4cm-wide pieces. Spoon out the middle of each so that the bottom remains. Grease a baking dish with vegetable oil, place the squashes on it, and bake in a preheated oven (180°C) for 15 minutes. Fry one finely chopped onion in a pan with butter (50 g). Add finely chopped mushrooms (200 g) — champignons will do — and fry until tender. Vegetable oil can be added when frying. Next, add flour (1 tbsp), fry thoroughly, pour in milk (150 ml). Add salt and pepper. Stir until the sauce thickens. Fill the squash pieces with the julienne. Sprinkle on top with grated cheese (100-150 g). Bake in the oven for 15-20 minutes until golden brown.

Eggplant or squash rolls with a curd-and-nut filling often appear on the festive Russian table as an appetizer. But they can also be cooked on a larger scale. 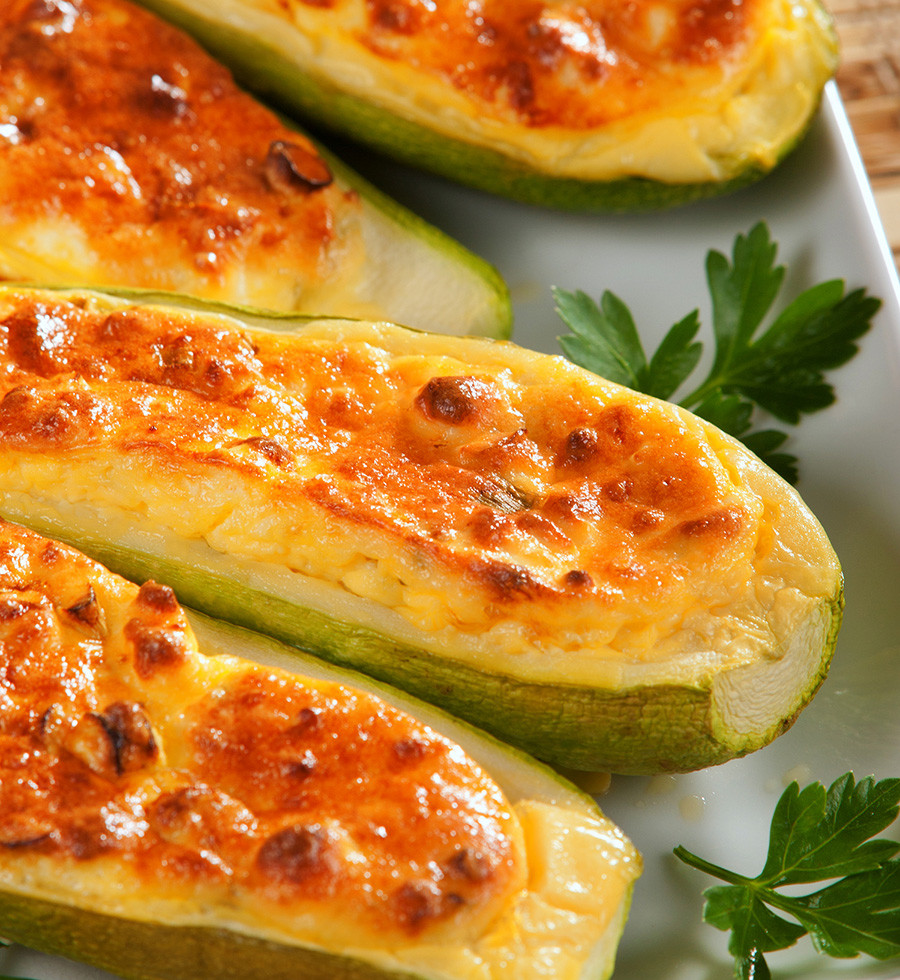 Recipe: Cut two squashes in half, remove the middle (place to one side for now). Season with salt and pepper, bake in a dish greased with vegetable oil in the oven at 180°C for 15 minutes. Finely dice the pulp of two tomatoes (without seeds), do likewise with a bell pepper, olives (30 g) and the squash middle (again without seeds). Chop garlic (1 clove) and fry all the vegetables in olive oil in a pan for about 10 minutes until tender. Mix the vegetables (plus the oil from the pan) with curd (80 g), pine nuts or walnuts (40 g) and breadcrumbs (40 g). Add salt and pepper to taste. Stuff the squash halves (“boats”) with the filling, sprinkle more breadcrumbs (10 g) and nuts (10 g) on top. Drizzle with olive oil and bake in the oven for 15 minutes at 180°C. Before service, sprinkle with parsley as desired.

Squash with rice and processed cheese

This dish is known as “Monastery-style squash” — most likely due to the meatless filling, making it cookable during Orthodox Lent. 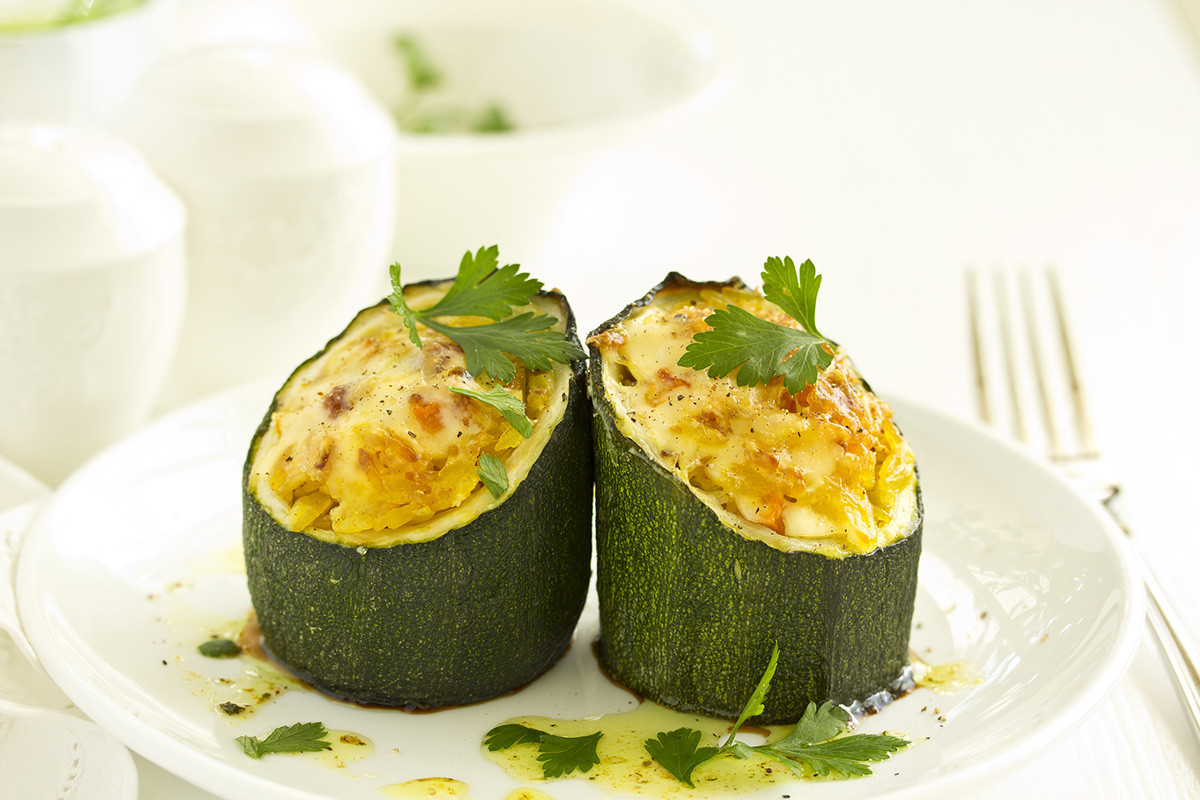 Recipe: Boil rice (20 g) until half-cooked. Dice half an onion, grate one medium-sized carrot, fry everything in vegetable oil, season with salt and pepper. Grate processed cheese (70 g) (if processed is not available, you can use hard). Throw the cheese in with the vegetables, stir so that it begins to melt. Add rice, butter (5 g) and chopped herbs. Mix everything, salt if necessary. Slice one large or two medium squashes into rings 4 cm wide, cut out the middle. Stuff the rings with the filling, tamp down with a spoon on both sides (the rice will grow in volume during cooking). Place the squashes in a baking dish or multicooker. Pour in 50 ml of water to prevent sticking. Cover with foil or pour on smetana/tomato sauce as desired. Bake in a preheated oven (180°C) for 25 minutes.

Squash with eggs and herbs

Squash is just as good as avocado for an exotic breakfast. Plus, they are easy to digest and rich in healthy minerals and vitamins, including collagen. 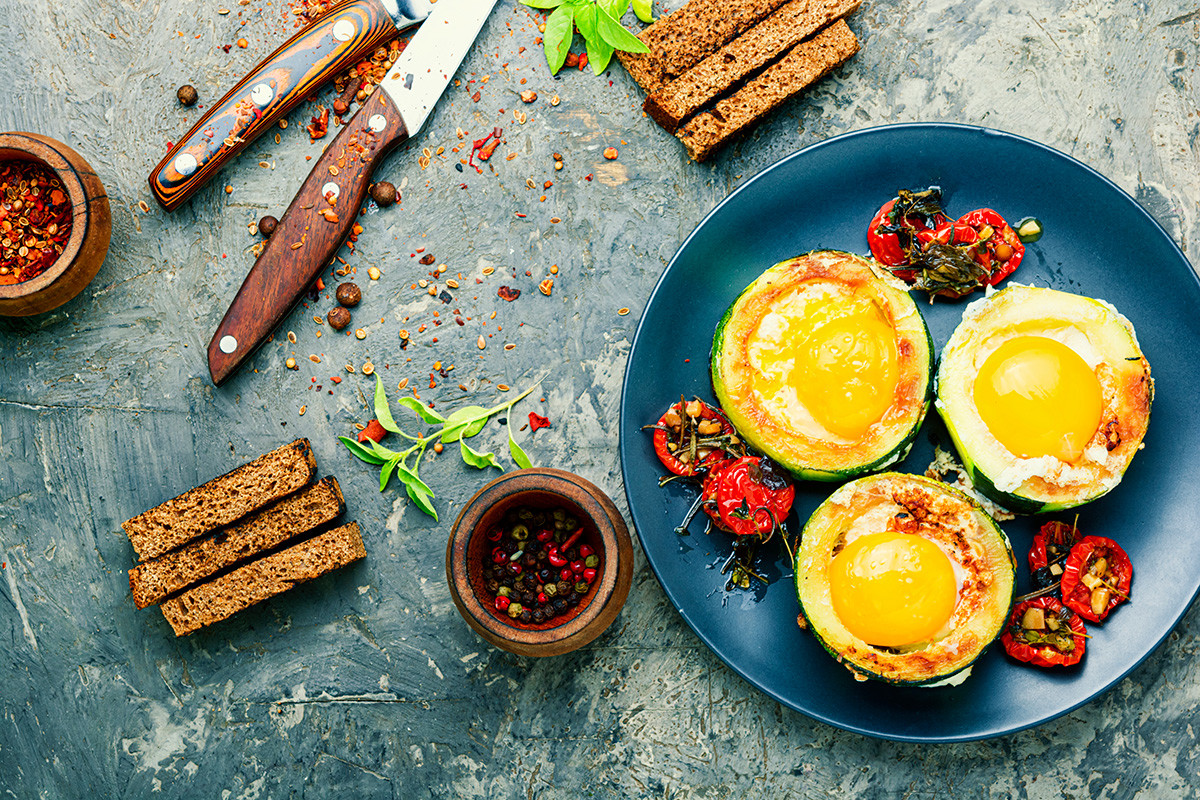 Recipe: Wash two young squashes, trim the edges, cut in half. Remove the middle with a teaspoon. Put the squashes in a baking dish, pour in 50 ml of water. Season with salt and pepper, put in a preheated oven (180°C), bake for 10 minutes. Take out of the oven and pour an egg into each “boat”, taking care to keep the yolk whole. Add salt, sprinkle with herbs (for example, parsley). Bake in the oven for approximately 10 more minutes.