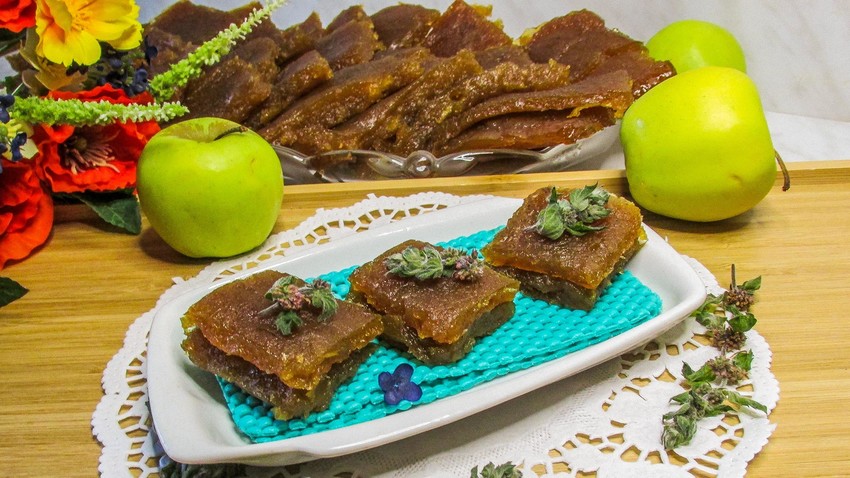 Some apples, sugar and patience are all you need to make this all-natural and delicious apple marmalade.

Olga Brovkina
As summer ends this dessert allows you to bite off more than you can chew.

What’s up with the Russian lust for apples?

This year, as usual, Russia is blessed with a bountiful apple harvest. You can’t even imagine how many things can be prepared with preserved apples - jarred fruits and jams, jellies, compotes (Russian variation of nonalcoholic fruit punch), dried apples under the scorching sun, fruit strips or pastila, Russian marshmallow, zefir, or marmalade.

In Soviet times, apple marmalade could be found in any department store. It was sold in plain and small cardboard boxes and, as the majority of food items at that time, it was all natural, healthy, and tasty. Apple marmalade was a favorite among children, and many delicious items could be cooked with it as a filling; for instance, pirozhki (small closed pies), open pies, or cakes.

My mum used to cook crescent rolls with apple marmalade and it was out of this world! Divinely beautiful, not a drop of marmalade seeped out of those rolls, but so rich and juicy inside they were, with the subtle flavor of sour apples and the smell of baked pastry wafting across the kitchen.

It’s worth mentioning that preparing apple marmalade isn’t easy, and not all housewives can afford to spend several days on this. Probably that’s why there’s been a decline in cooking this sweet treat. However, thanks to optimization, slowly but surely marmalade is regaining popularity.

Can you store marmalade for years?

Many people believe that apple marmalade can be stored for up to 3 years in a refrigerator. I wouldn’t be so sure, but I haven’t checked myself because marmalade in my family tends to disappear quicker than any other sweet treat.

My homemade marmalade is a cut above even the best sold in a shop, simply because it’s made of natural ingredients and not with preservatives, dyes, and other additives. Yeah, it takes a considerable amount of time to cook it, but don’t forget - it’s a great way to save your harvested apples from being thrown into the garbage. 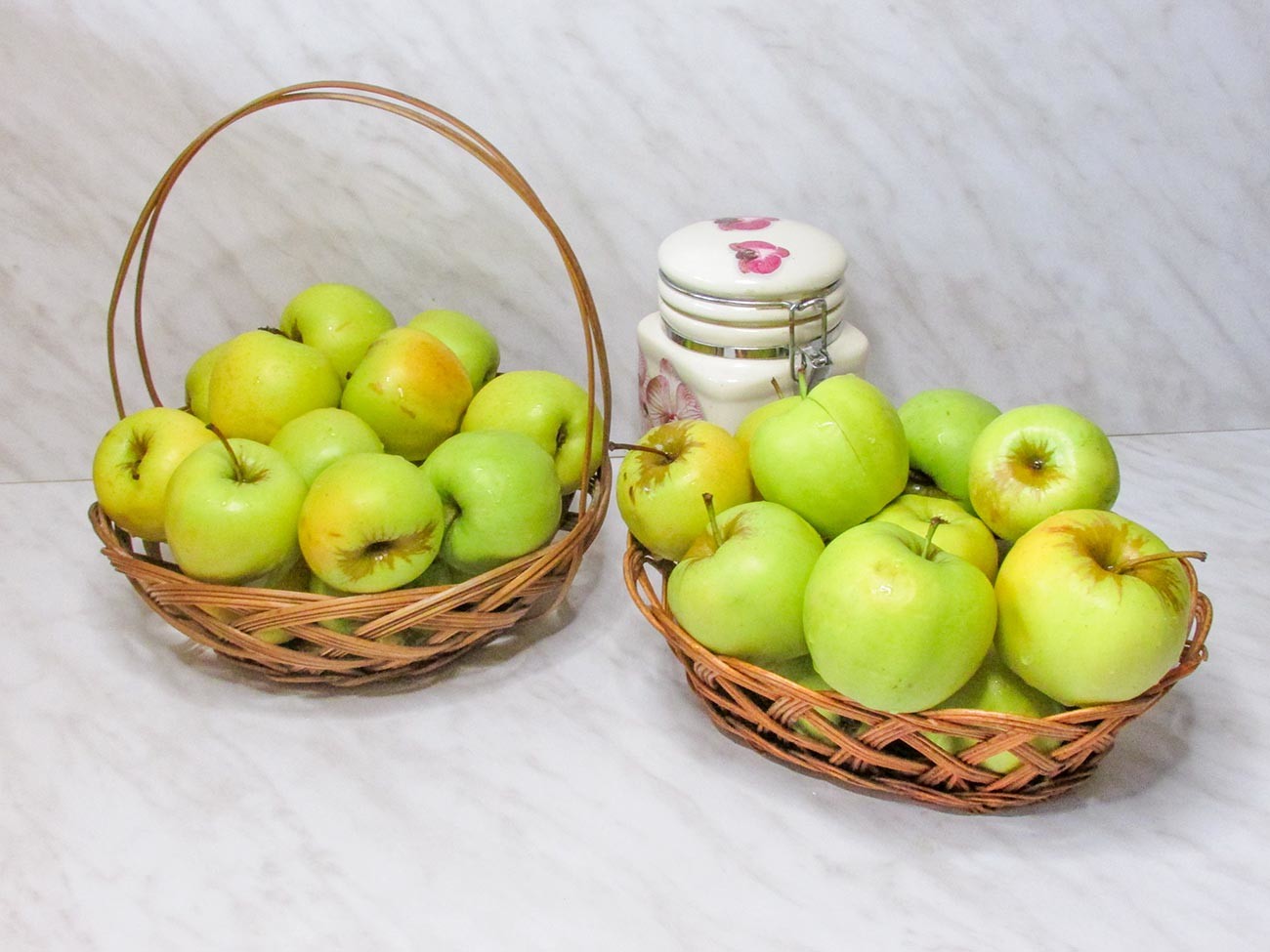 1. Wash and then dry the apples; remove the inner part with seeds and cut off all "imperfections", for example, any rotten parts. 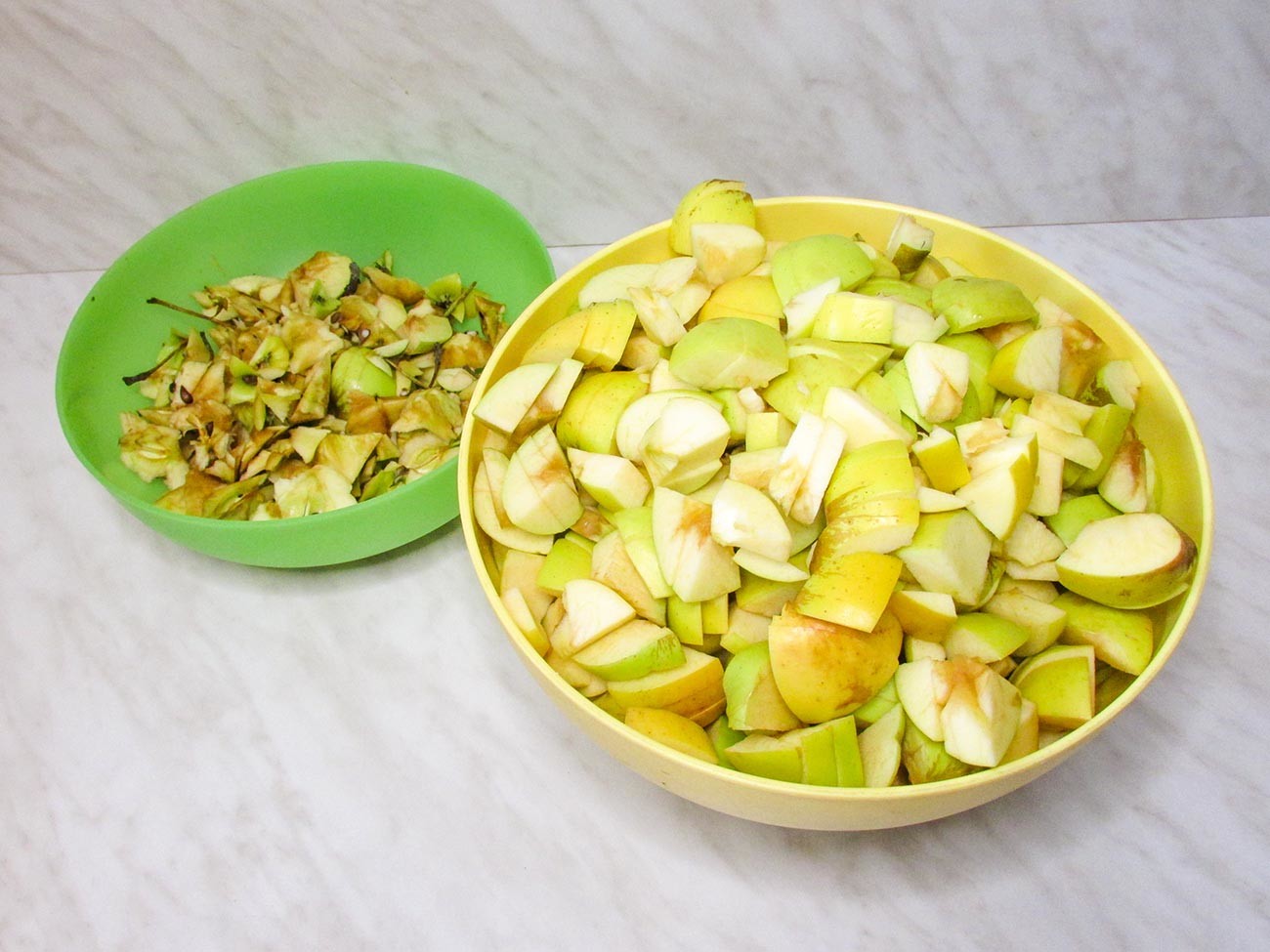 2. To make pectin from apples, and to make the marmalade stronger and harder, put the removed inner parts into a small saucepan, add a glass of cold water, put on the burner, and cook for 5-10 minutes. 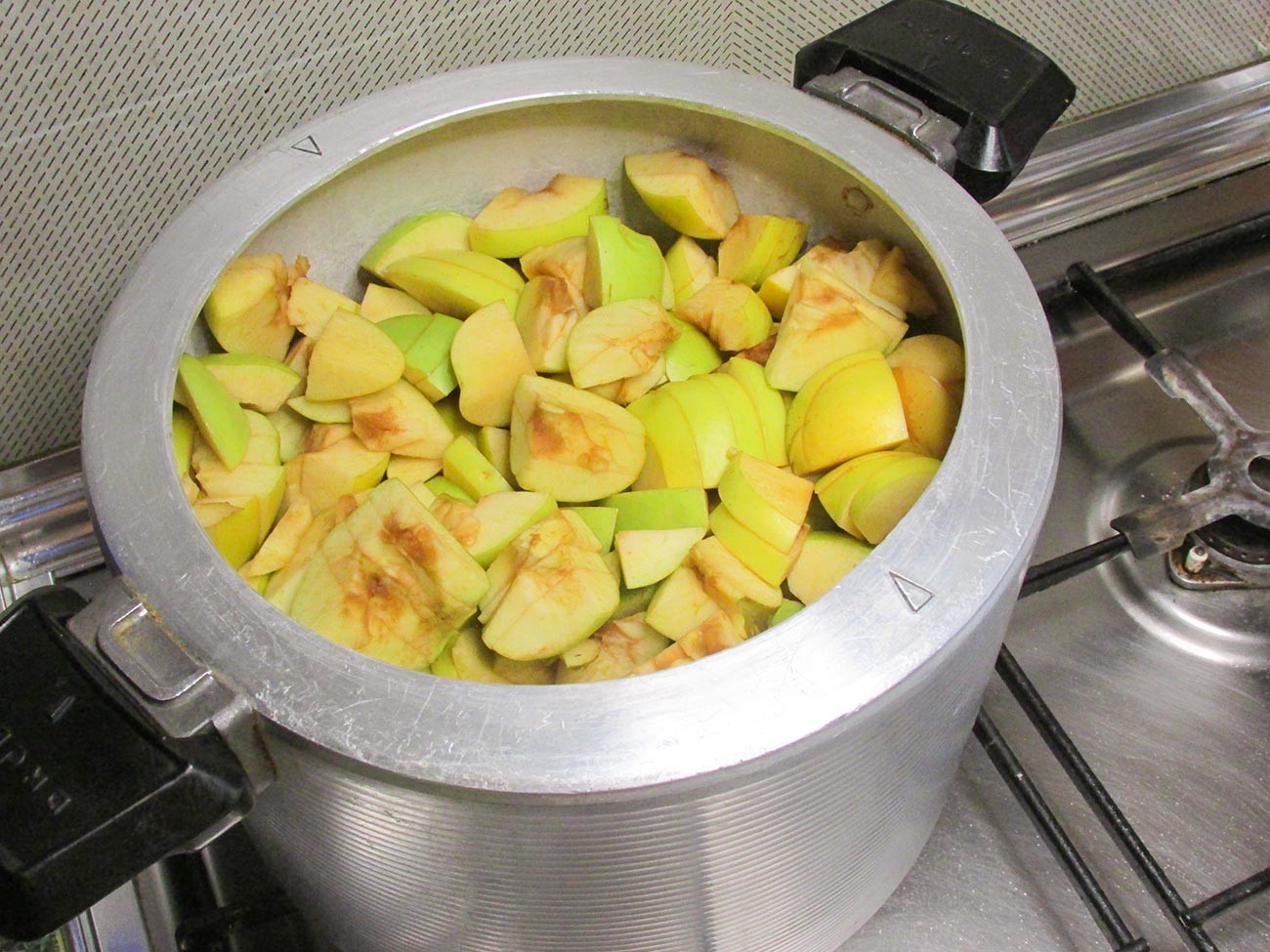 3. After that, strain the mass through a fine colander and add the thick liquid, which strained into the bowl, to the saucepan with prepared apples. 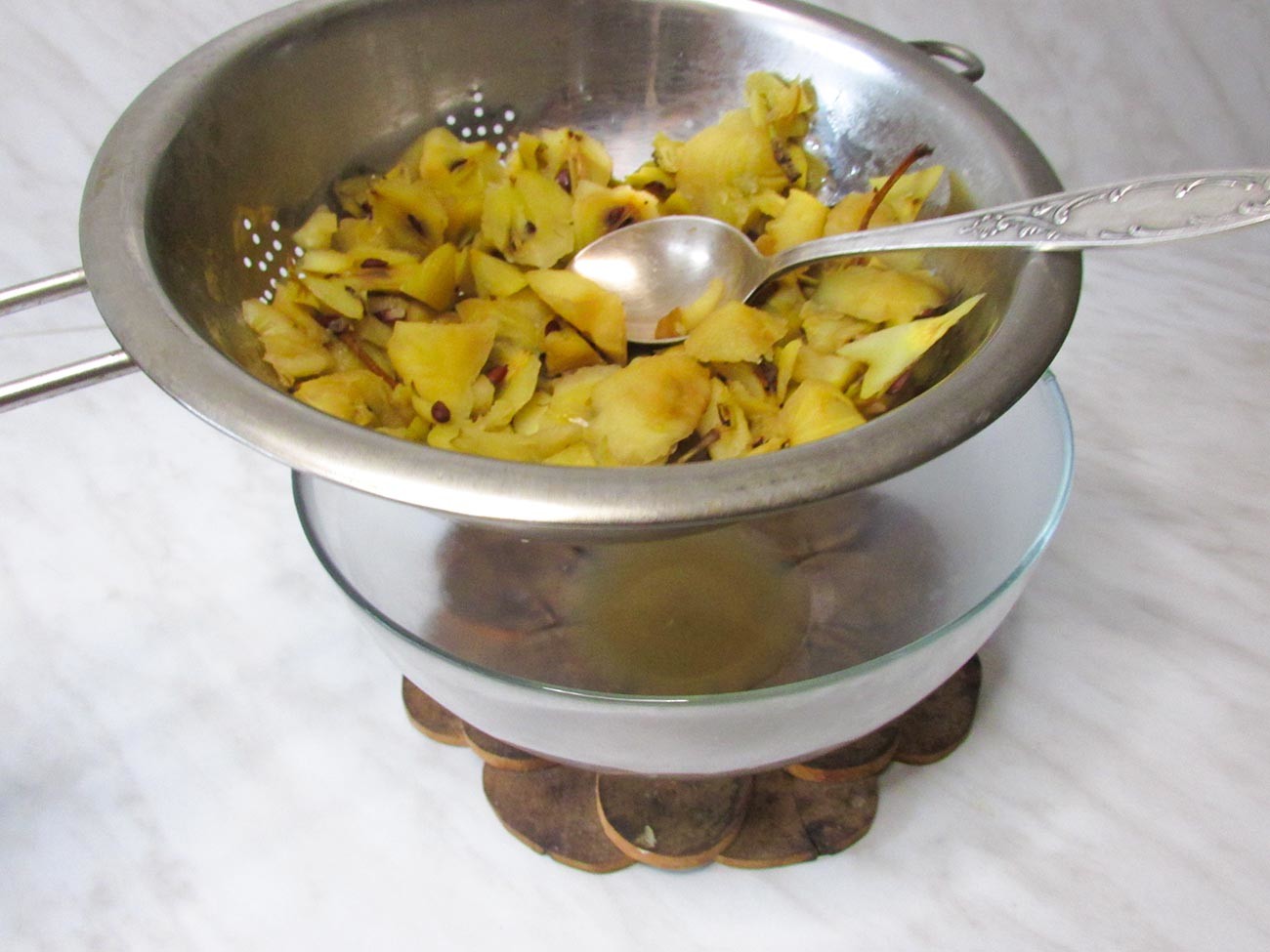 4. You probably already chopped the prepared apples into small pieces, so put them in a saucepan. When making marmalade, I use a 5-liter saucepan with a thick bottom.

5. Cover the saucepan with apples, put on low heat and cook until soft. Add a little sugar. Turn the soft cooked apples into a homogeneous puree. It’s more convenient and easier with an immersion blender, but if you don’t have one, knead the apples with a masher or rub through a wire sieve using a wooden spoon to press and scrape the mass sideways. 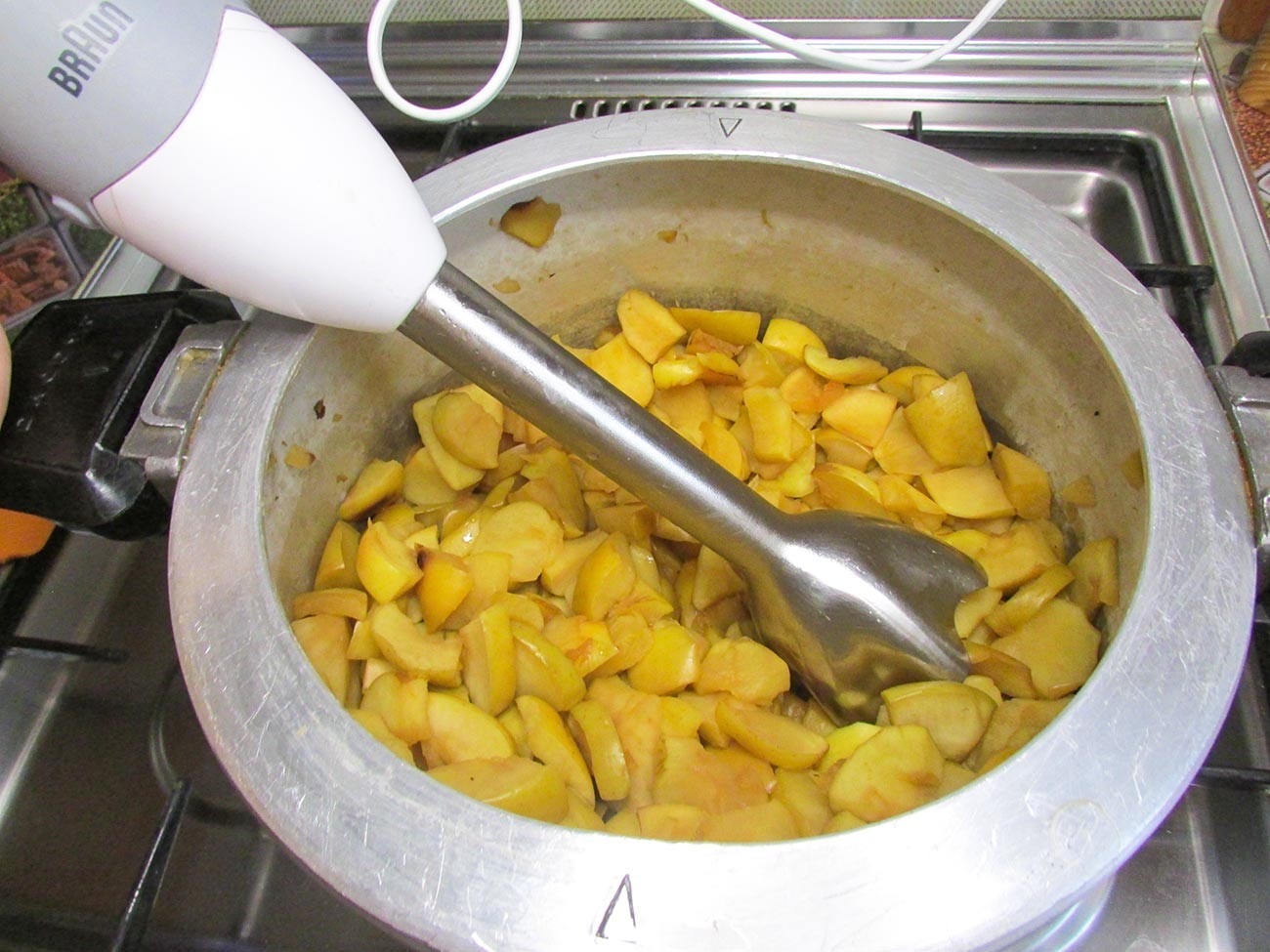 6. Add 1 kg of sugar. By the way, Elena Molokhovets, a famous culinary writer of the first half of the 19th century, suggested taking 1.5 cups of sugar for every 3 cups of puree. Simmer the apple mass mixed with sugar on low heat, uncovered, to a marmalade consistency. 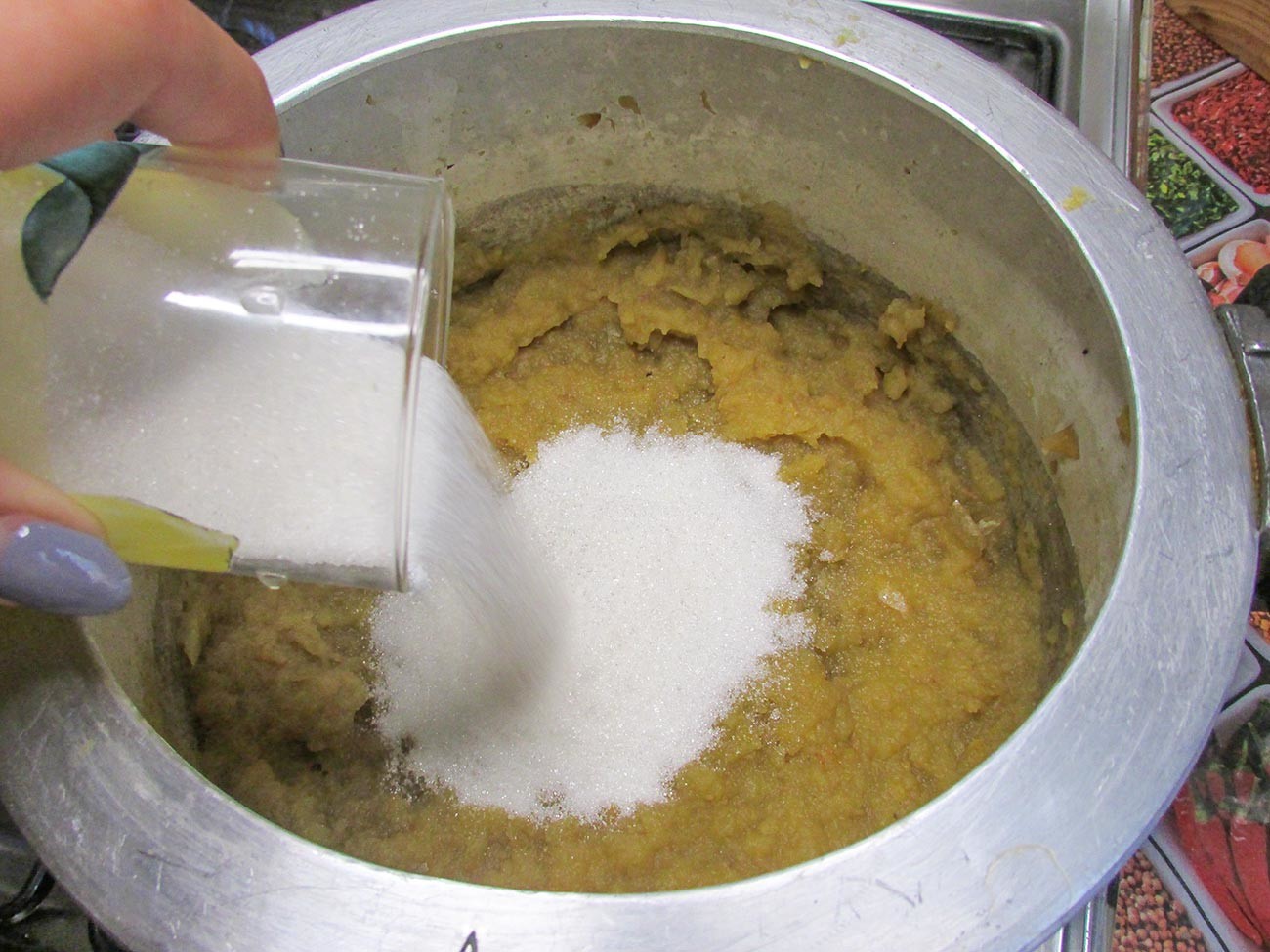 7. Personally, I cook marmalade on the stove as long as it’s convenient and comfortable, and then pour the thickened apple mass into a deep baking sheet (2.5 kg of apples are enough for a standard 30x40 cm baking sheet), covered with baking parchment paper, and dry in a slightly open oven at a temperature not exceeding 100°C. 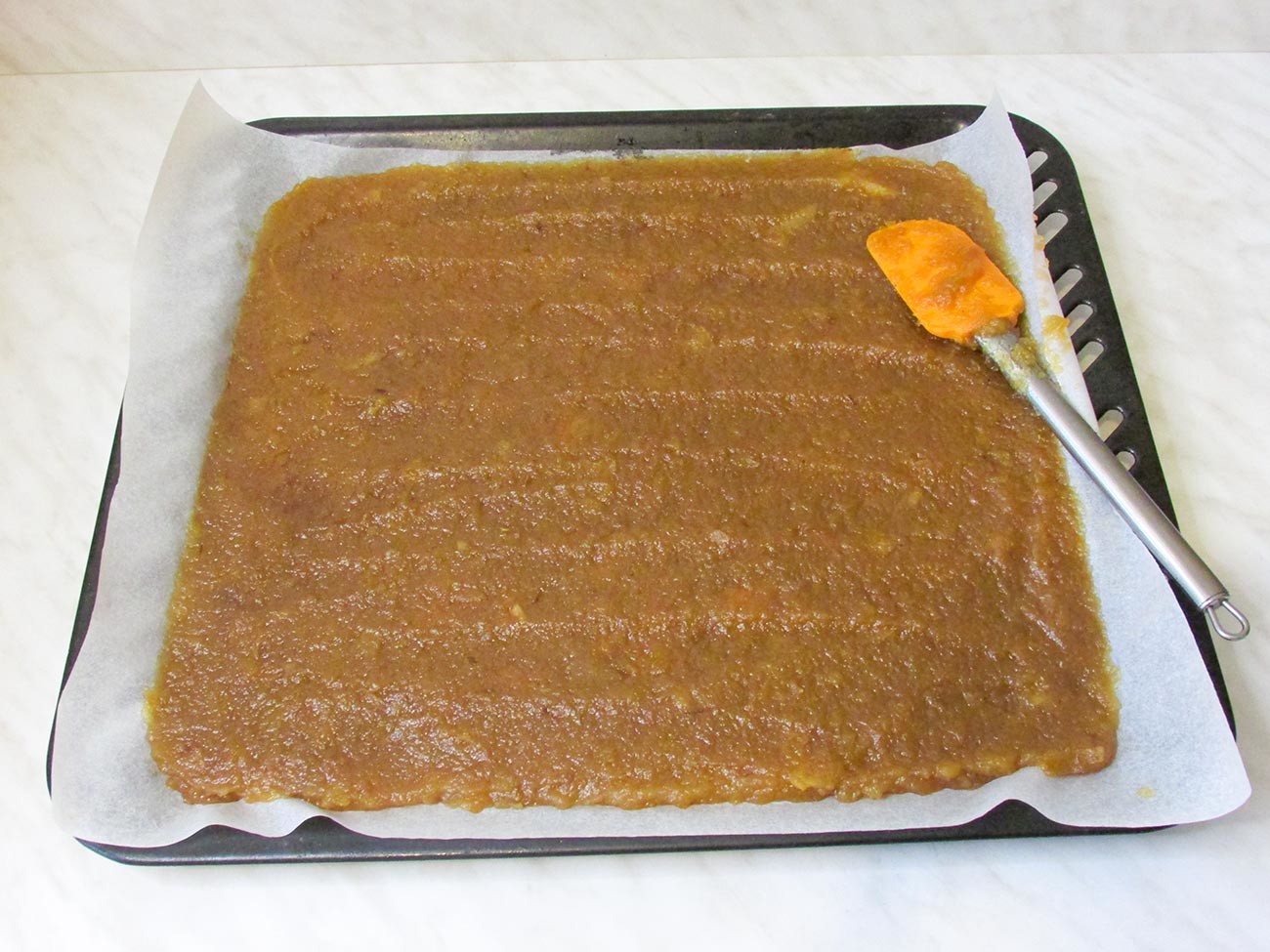 8. Usually the drying process is the longest part. I dry the marmalade in a slightly open oven for about an hour, then turn it off, and leave the baking sheet with marmalade to cool completely; then repeat this several times. Finally, leave the marmalade in the oven until the next day when I check if the marmalade has the desired consistency and density, but, if not, I dry it further in the same manner. 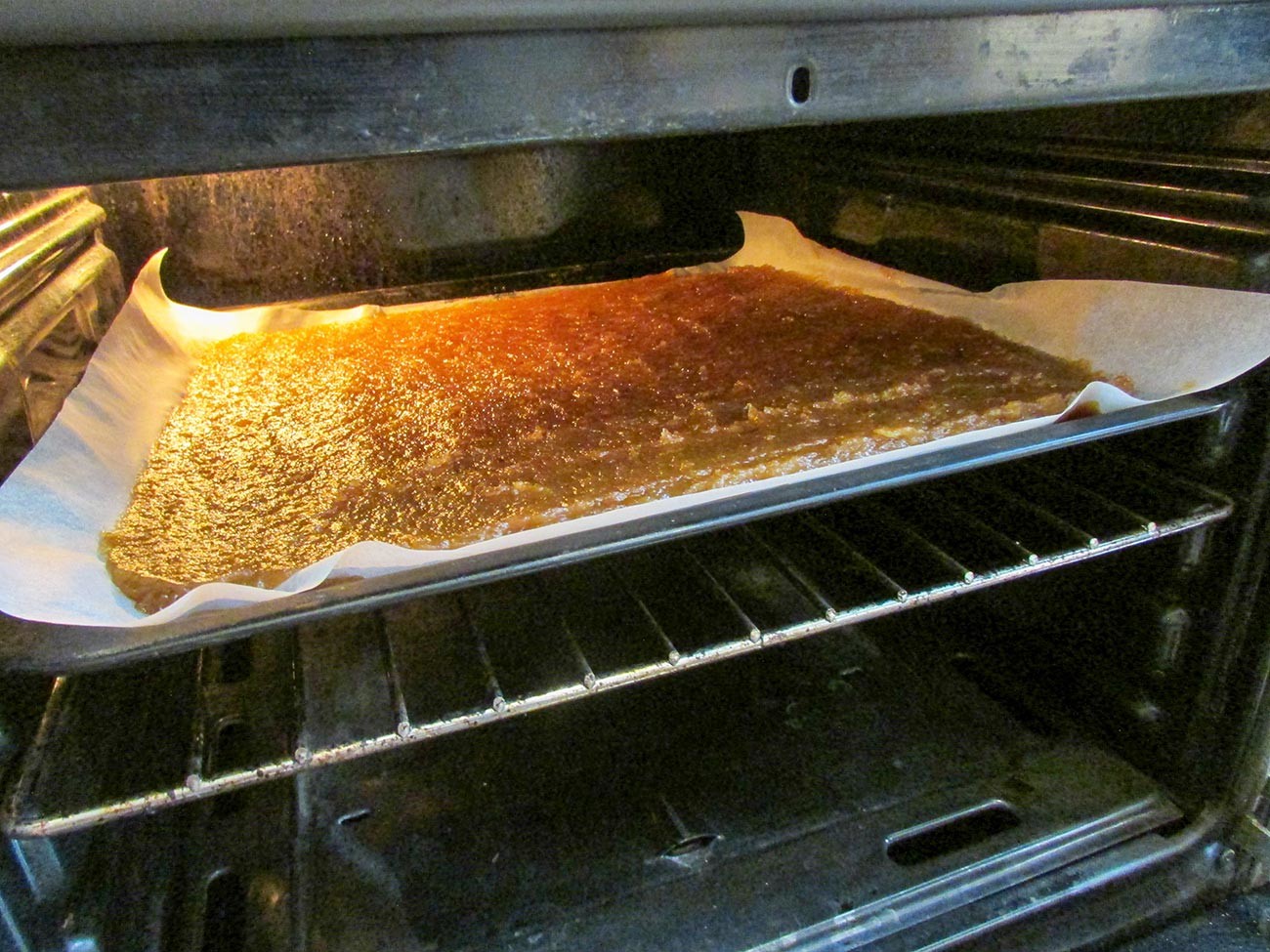 9. If necessary, turn over the layer of marmalade and dry on the other side. To do this, cover the marmalade with another sheet of baking paper, turn it over quickly, carefully remove the bottom layer of paper, put a slice of marmalade on a baking sheet, and put it into the oven for another day.

10. When the marmalade is dry, cut it into layers or small pieces; cover with parchment paper, and store in the refrigerator, although it’s quite possible that it can be stored at room temperature. 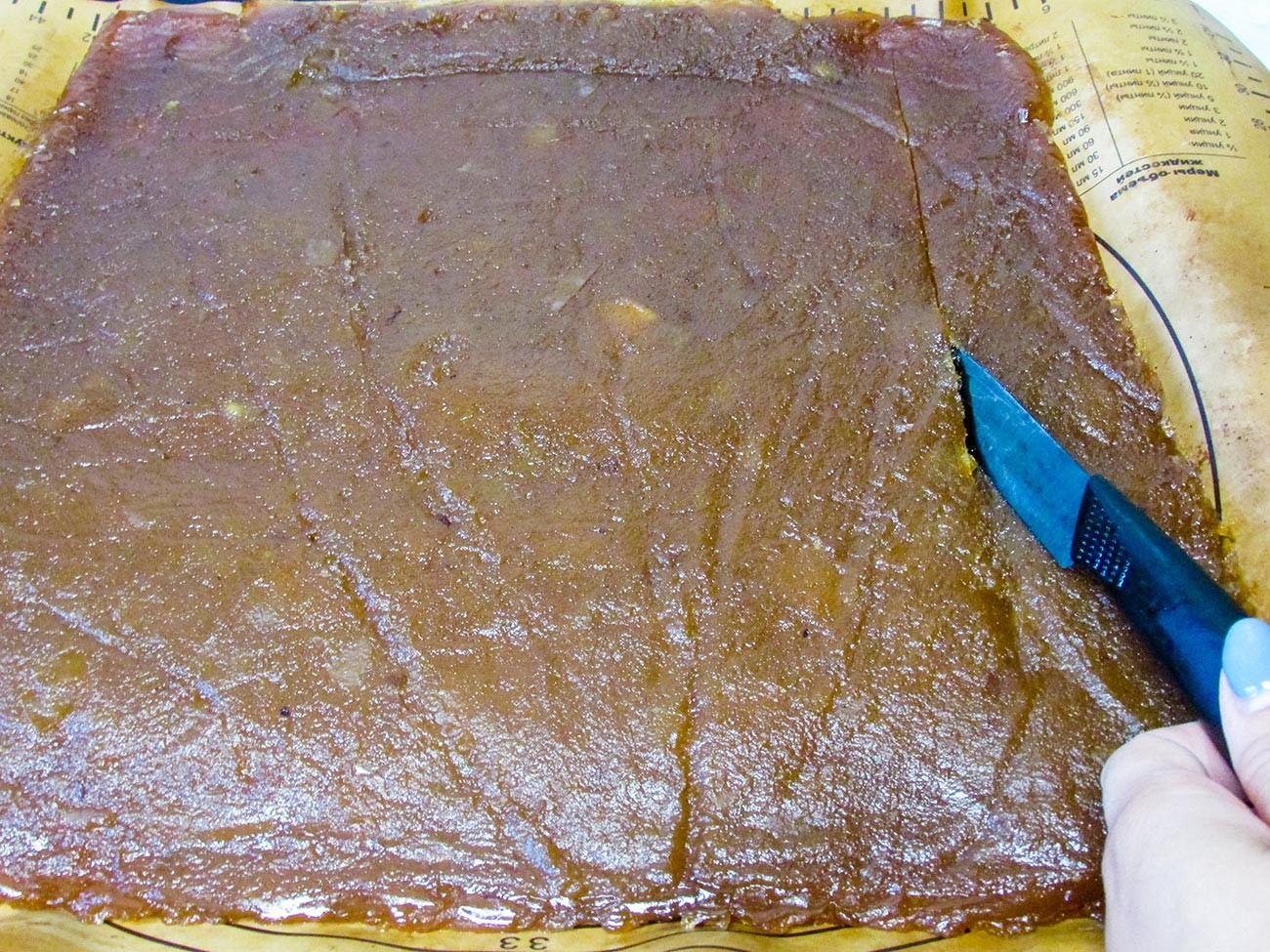 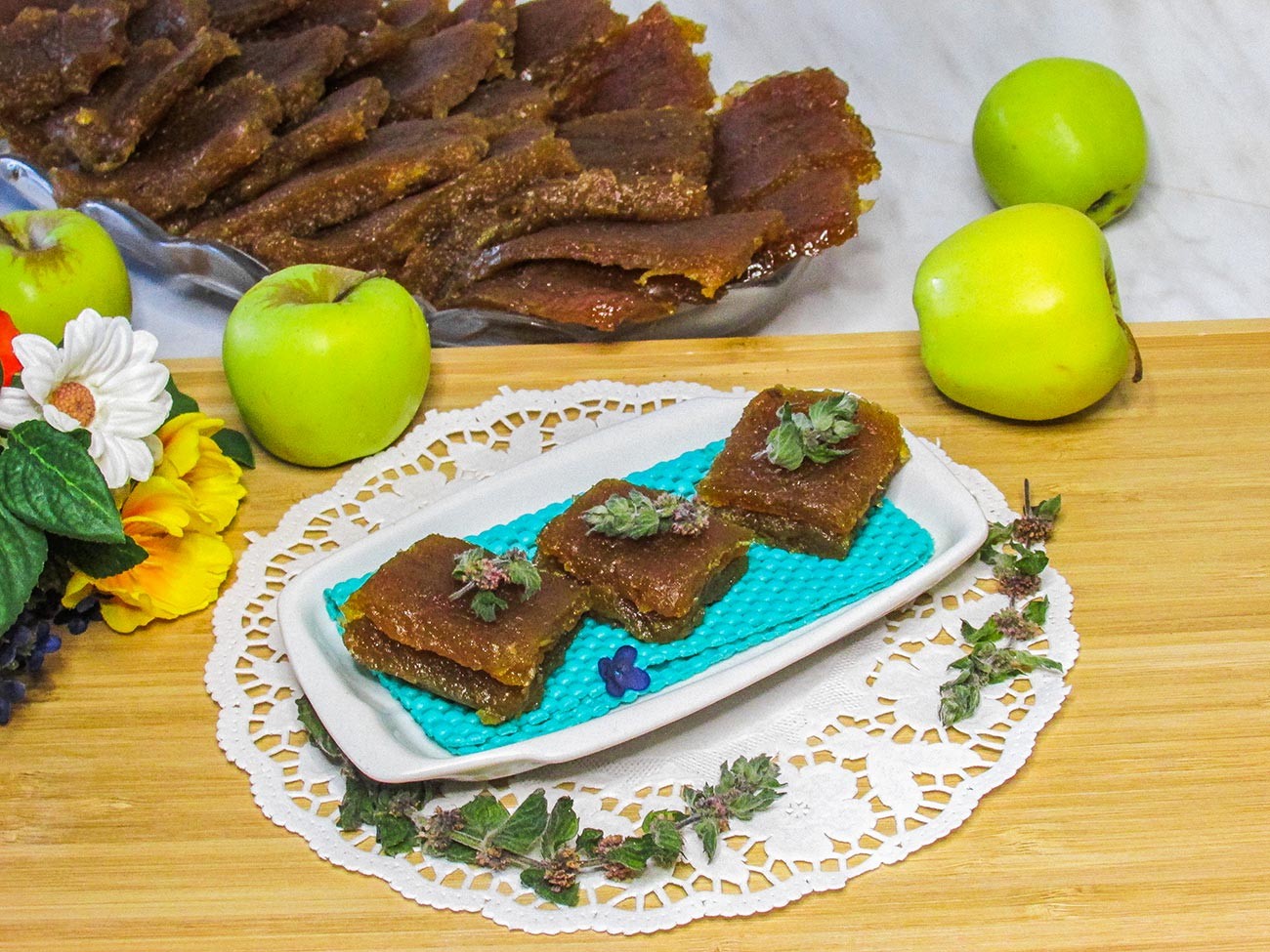