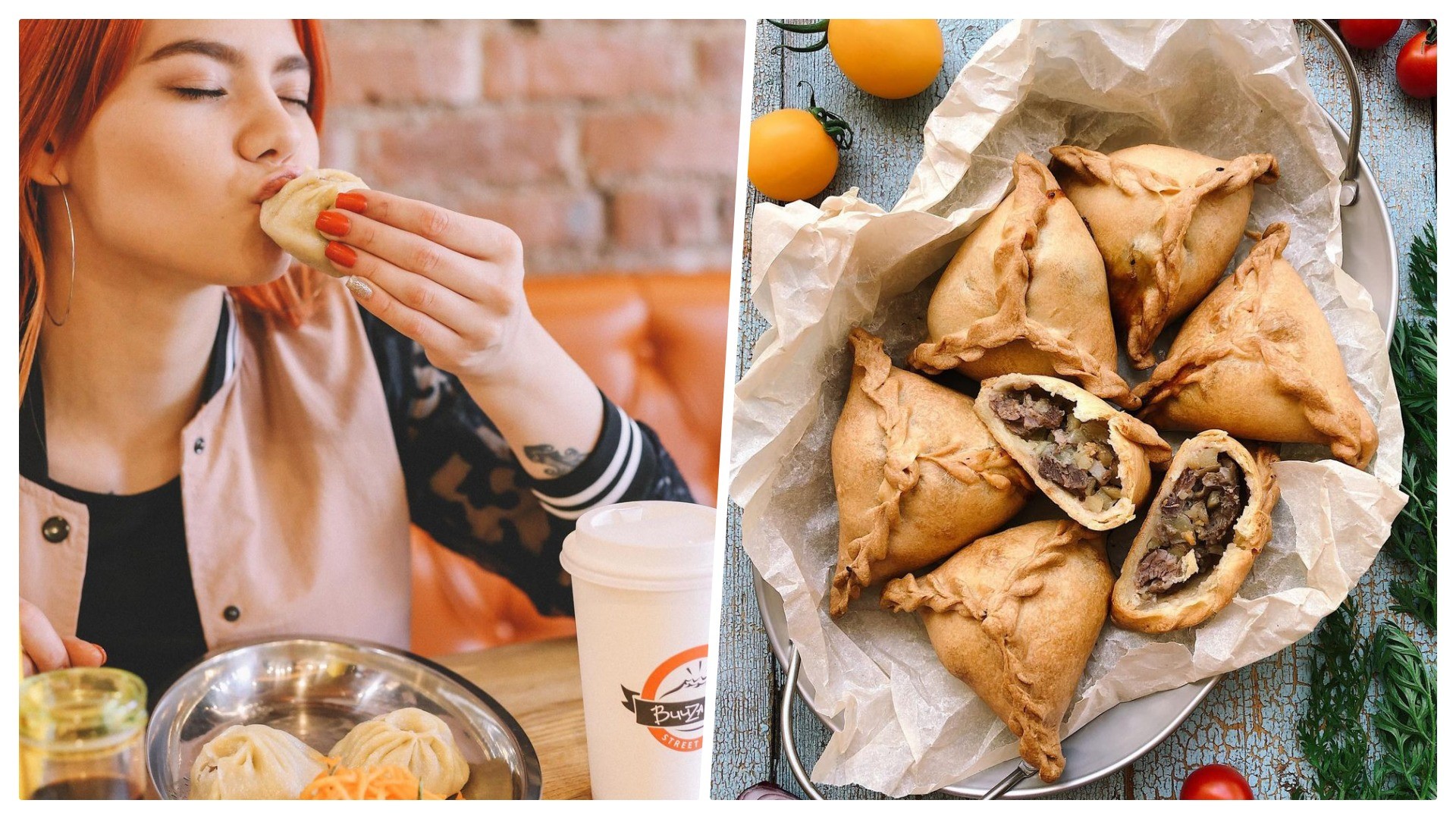 @tubatay.food/instagram.com; @buuzabao/instagram.com
Russian culinary “exoticism” goes way beyond shawarma and shashlik. In Buryatia, you’ll be offered khuushuur on a stick, while in Kabardino-Balkaria they won’t let you go until you’ve tried a couple of local khychins. 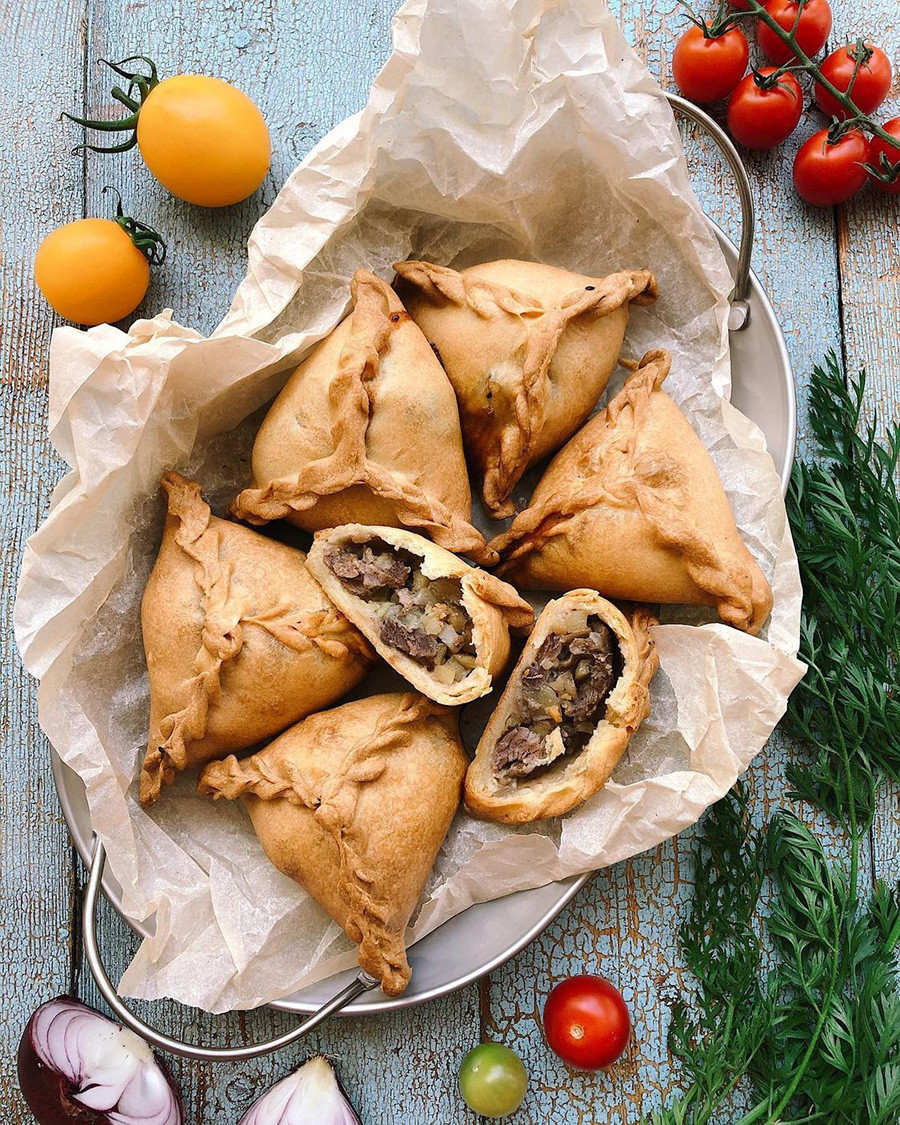 Tatarstan has entire chains of fast food cafes offering all sorts of national dishes. Echpochmak — a triangular pie filled with meat and potatoes — is a classic of Tatar cuisine and perfectly suited to the street-food format. A close relative of echpochmak is elesh, a round meat-filled pie made with smetana-based dough. Instead of burgers in Tatarstan, try the local kystyby — a flatbread rolled in half with porridge or potatoes. 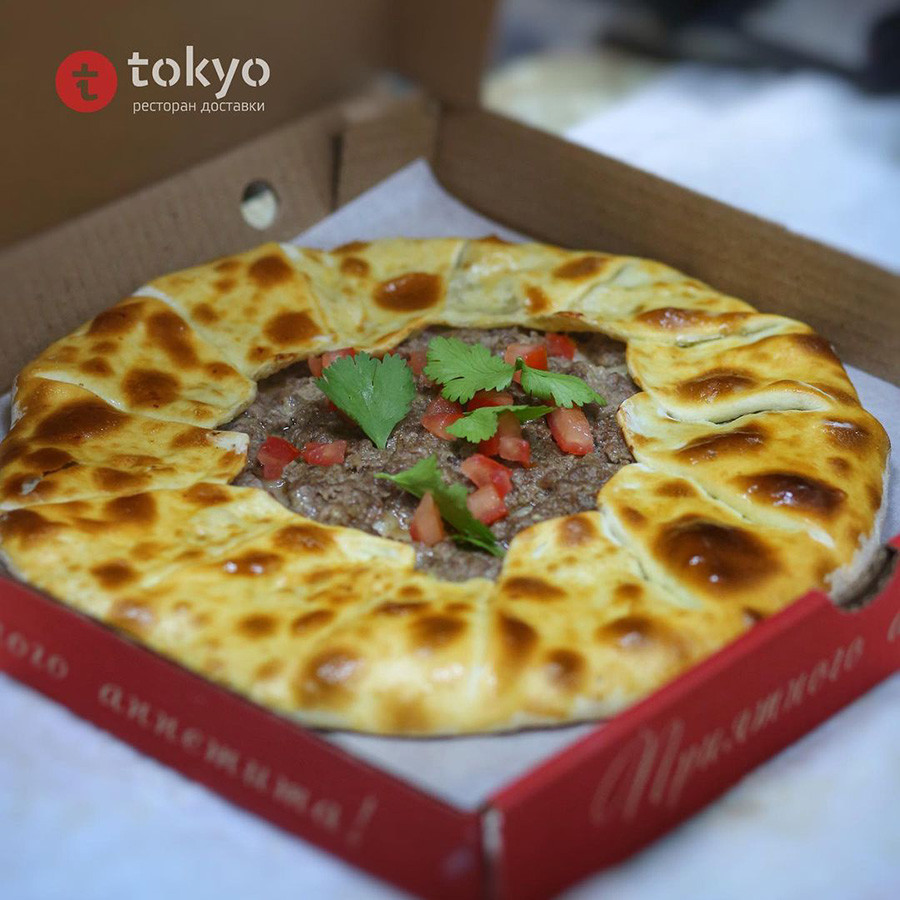 It’s hard to die of hunger in Dagestan: cafes and food courts with traditional Caucasian cuisine lie temptingly in wait at every step. One of the most ethnically diverse republics in Russia (over 30 indigenous peoples!), the local cuisine is noted for its rich variety of taste sensations. For a quick snack, you can't go wrong with chudu — thin or puffy flatbreads with meat and vegetable fillings, cooked in a dry pan and smeared with butter or oil. 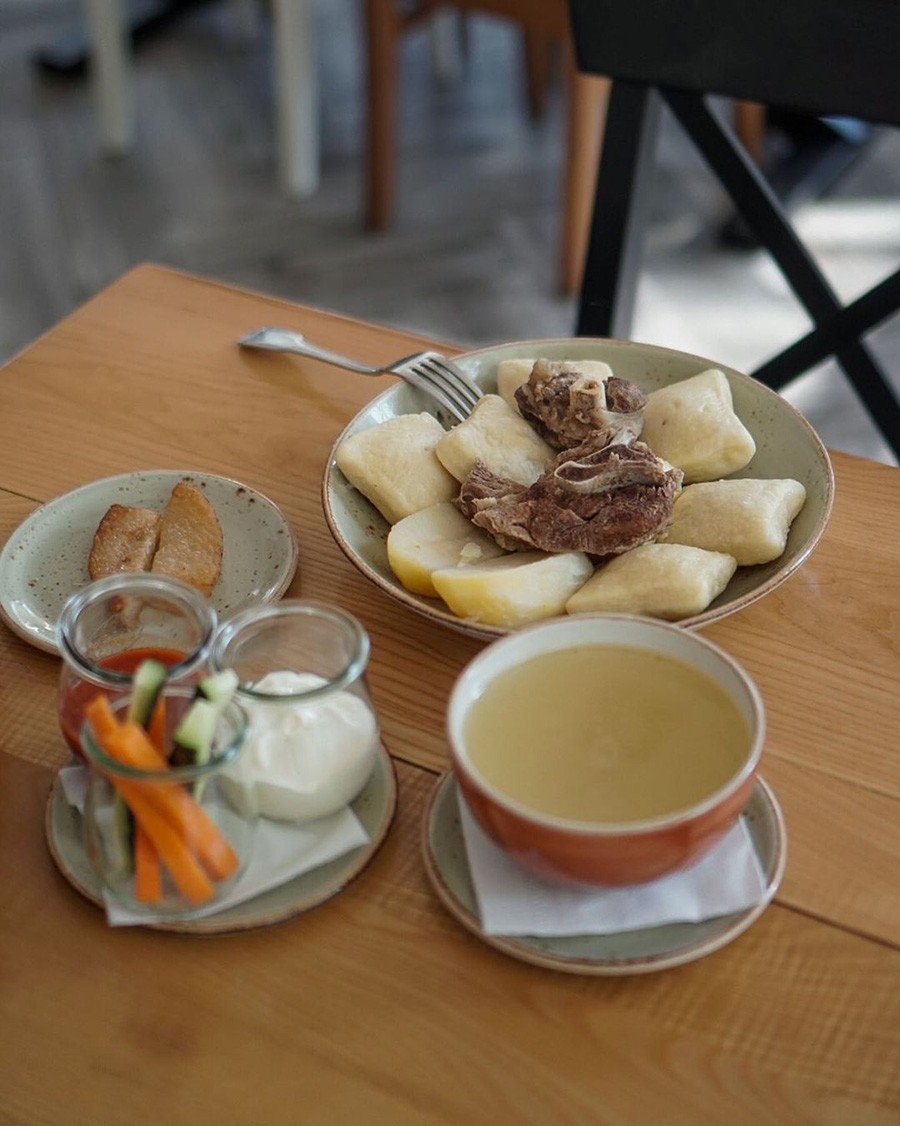 The “most Dagestani” dish is khinkal. The word is similar to the Georgian khinkali, but in the Dagestani version the boiled dough and meat are served separately. The Avars use large pieces of dough, the Laks small strips, the Kumyks roll it into thin rhombuses, and the Dargins twist it into “snails” and then steam. Basically, a gastronomic tour of Dagestani restaurants is well recommended. 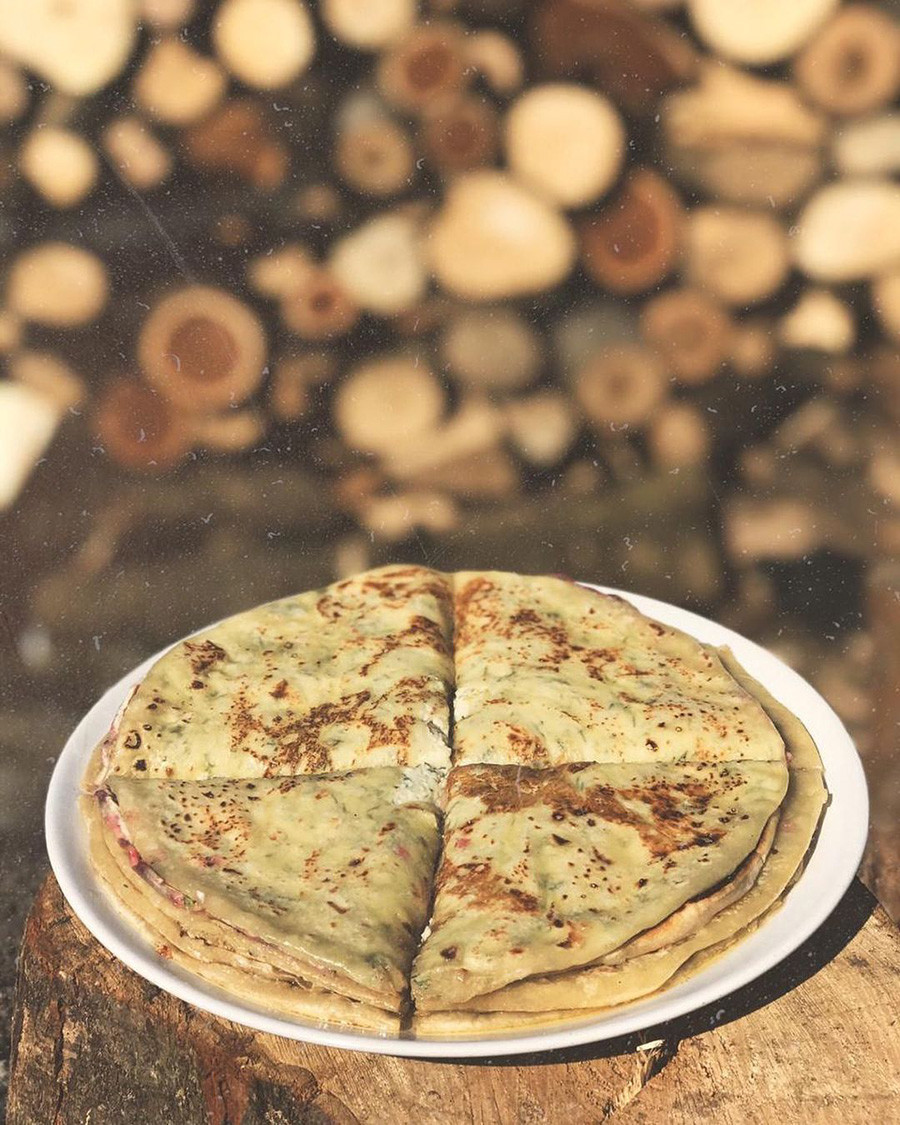 This dish will make your heart beat faster and forget about your figure. In the neighboring republics of Kabardino-Balkaria and Karachay-Cherkessia, the king of the table is khychin, a very nourishing flatbread with various fillings. It is served both in restaurants and roadside kiosks. Balkar khychins are thin flatbreads, while Karachai ones are made of puffy dough with kefir or milk. The filling in both variants is always generous. Khychins are most often prepared with potatoes, herbs and meat, plus a healthy dollop of curd. Sweet flatbreads with berries are also found here. 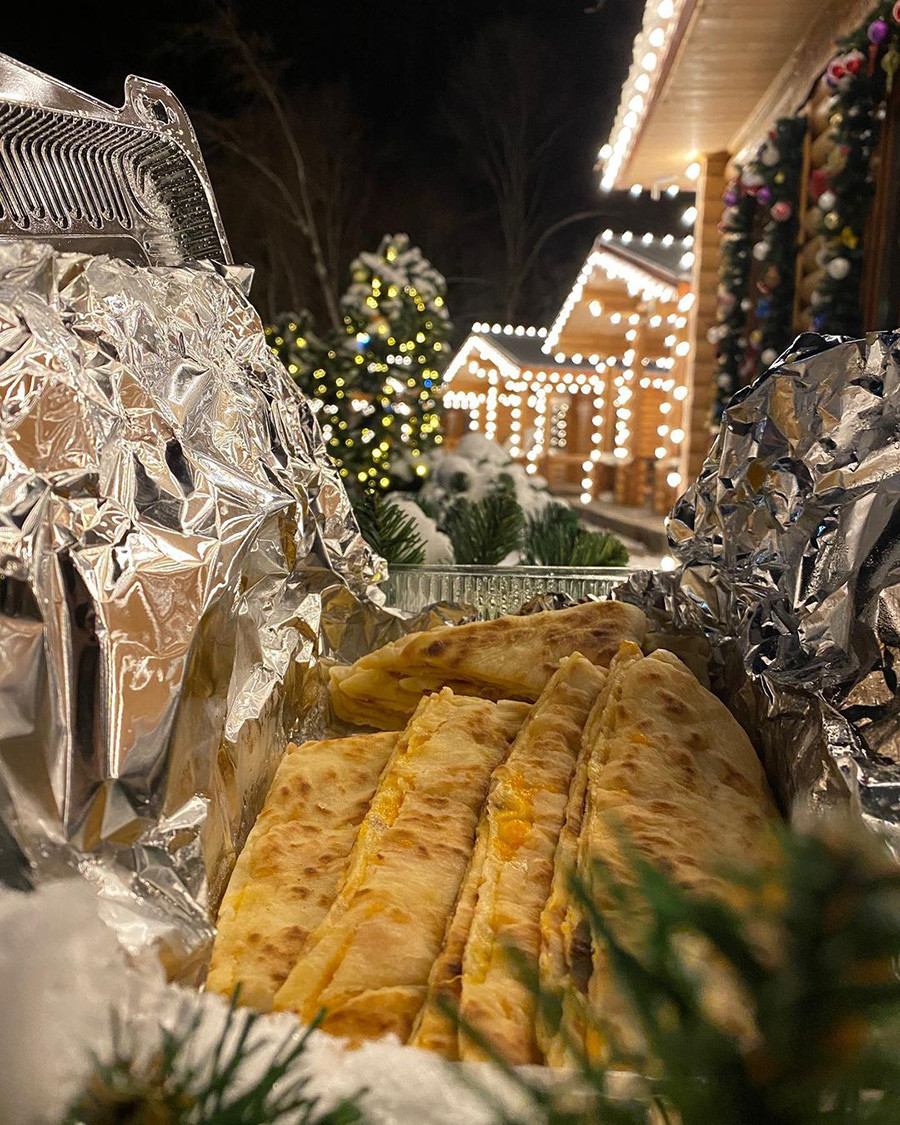 In Grozny, it’s not physically possible to walk past a food court exuding the aroma of freshly baked khingalsh — flatbreads made of wheat or corn flour with a pumpkin filling and sliced into pieces. The dough is very thin, almost weightless, and the filling is bright and juicy. Another extremely tasty Chechen flatbread is chepalgash, stuffed with curd and herbs, also served cut.

5. Khuushuur on a stick, Buryatia 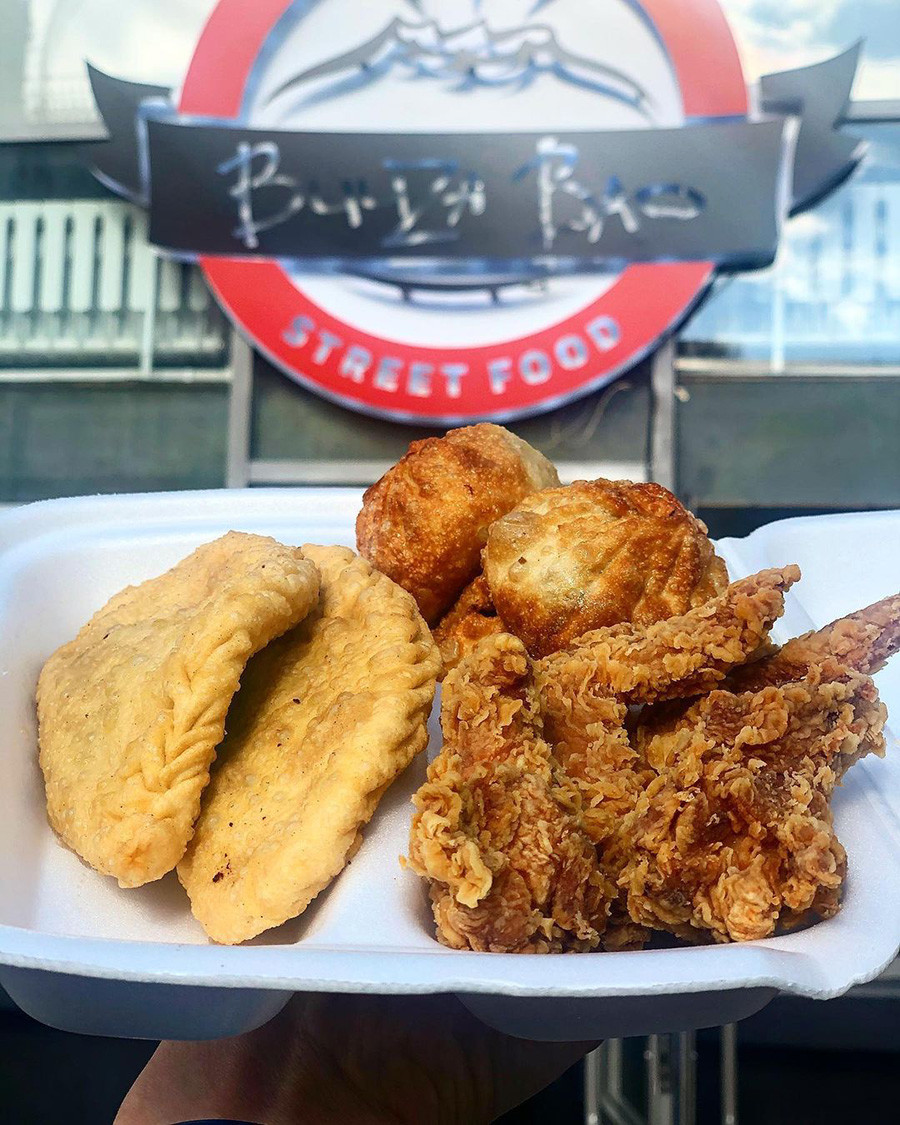 You definitely haven’t tasted this! Buryat street food is all about fried buuz, burgers with a traditional steamed bun, and khuushuur on a stick. The latter is a kind of small meat or cheese pastry, deep-fried. The stick is to avoid burnt or greasy fingers. 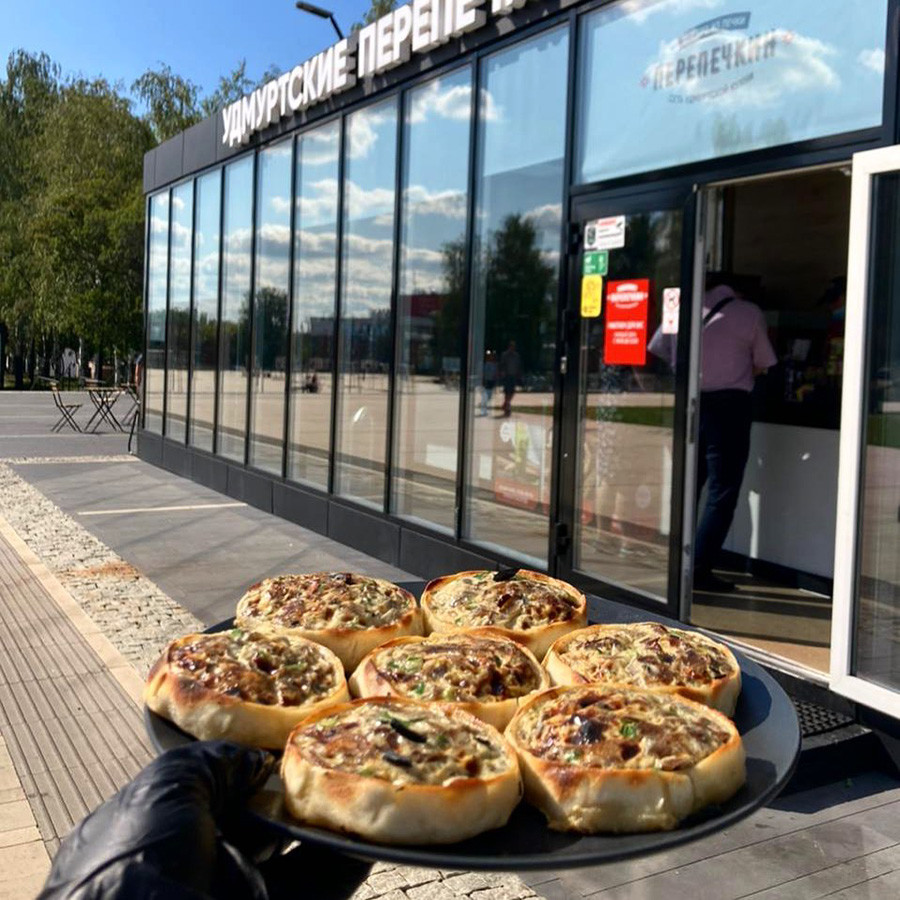 In the parks of Izhevsk, the capital of Udmurtia, mobile wood-burning stoves on wheels abound, where perepechi are baked. These “pie-baskets” are made of rye or wheat dough with a hearty filling: cabbage, minced meat, green onion, curd. The unusual name is derived from the Russian phrase pered pechkoi (“in front of the stove”), since these pies should be baked over a strong fire so they turn out delicious. Also cooked in mobile stoves are tabani — Udmurt flatbreads with a sauce similar in taste to Russian oladyshki (small pancakes or fritters). 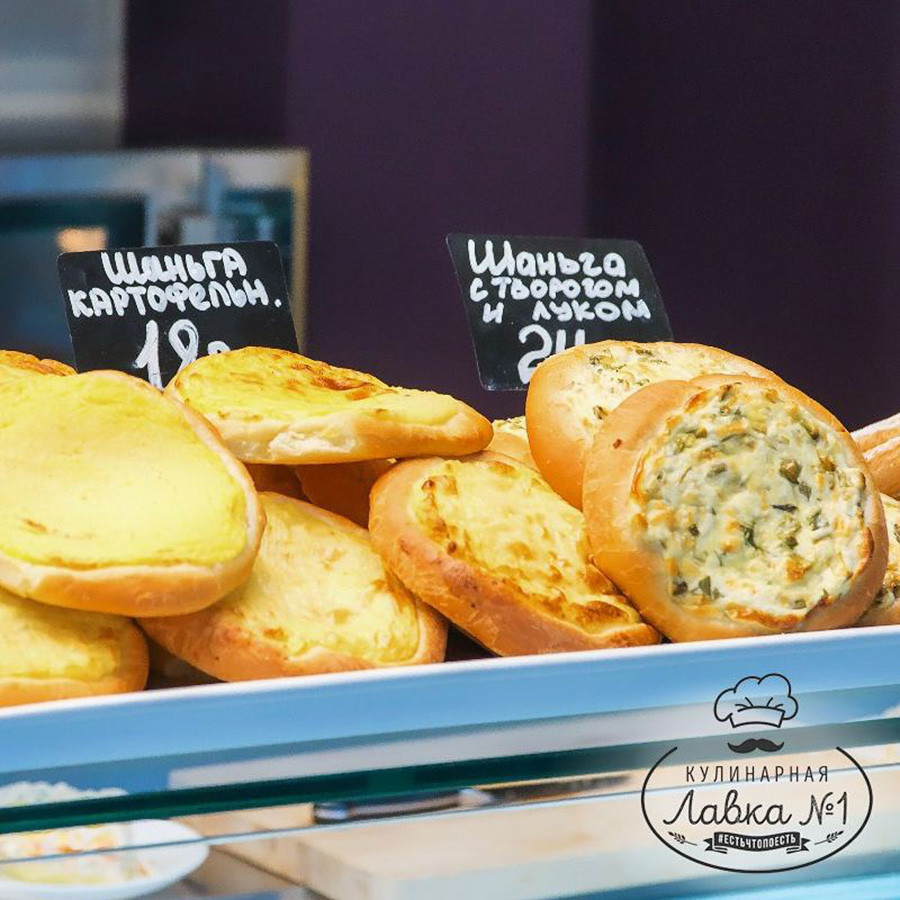 Open round potato-filled pies are as common in any Urals city as shawarma in Moscow, that is, literally on every corner. Shangi is the most famous dish of Komi-Permyak cuisine, and resembles Russian vatrushki (quark-filled dough rings). They are best consumed hot with smetana. 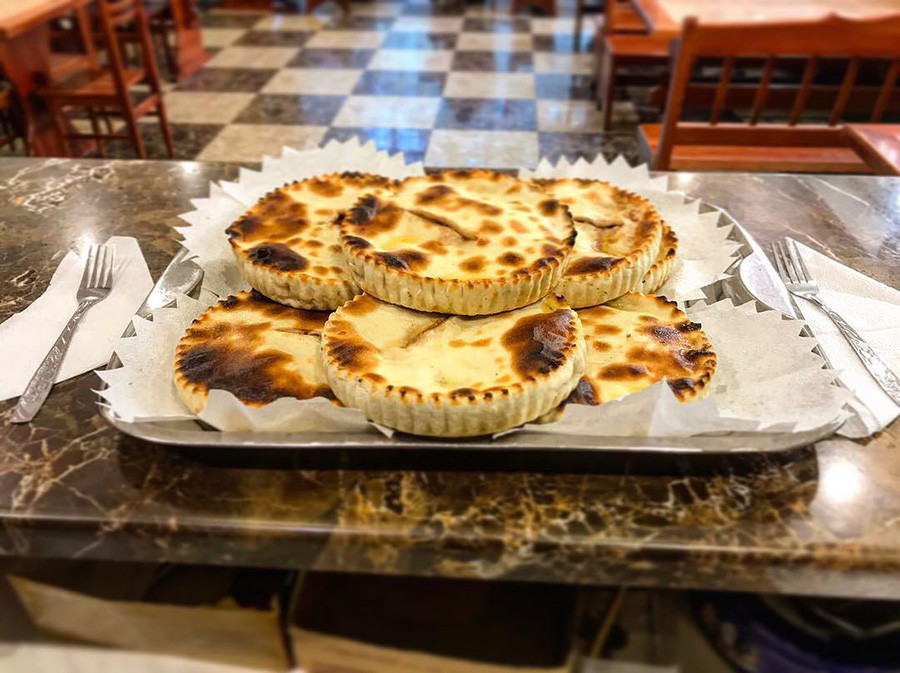 To visit North Ossetia and not taste authentic Ossetian pies is a gastronomic crime. Where else are so many different shapes and fillings on display? For example, fyddzhyny (easier to eat than pronounce) are closed pies with chopped beef and broth, both large- and mini-sized. Then there’s walibah, made with homemade Ossetian cheese. Pies are baked also with pumpkin, potatoes and beans, and each has its own name, of course. It's hard to find an establishment in this Caucasian republic that doesn't sell Ossetian pies. 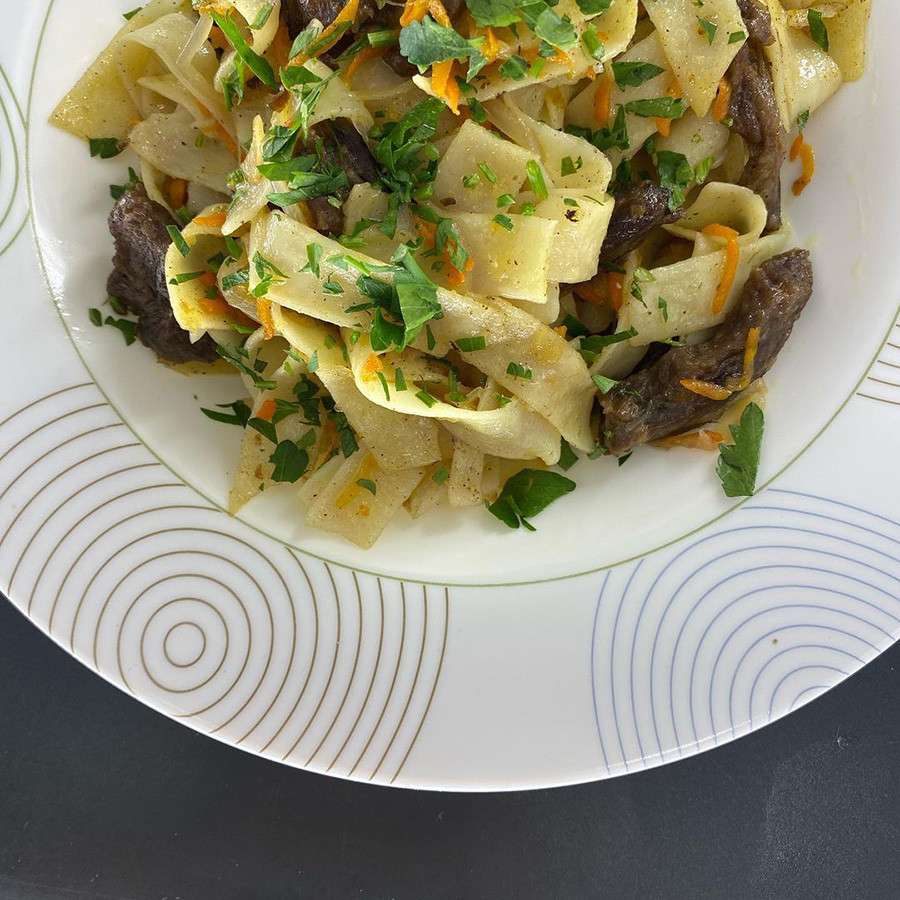 Traditional Kalmyk cuisine is rich in meat and dough (vegetables in the steppe are considered quite exotic). Huursn makhn is one of the most popular dishes in the cafes of Elista, the capital of the Republic of Kalmykia. It consists of chopped lamb or beef, fried with onion and carrot, and is served with homemade noodles. 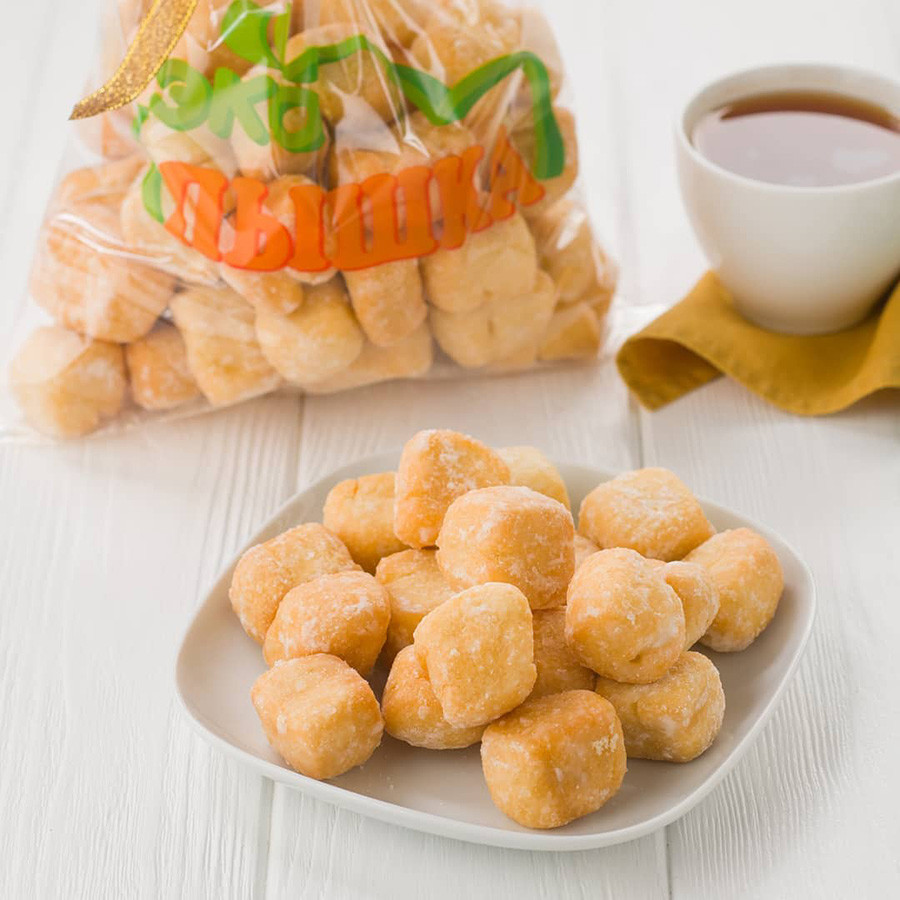 Boortsog, or baursak — Bashkir donuts — is universally loved. These oblong strips of dough are deep-fried in a cauldron, dipped in honey syrup and piled high. In days past, it was customary for a bride to prepare it for the groom’s parents on her wedding day (the name means “blood relatives”), but nowadays it’s served not only on special occasions. Traditional boortsog is sold in just about every bakery and confectionery in Bashkiria.