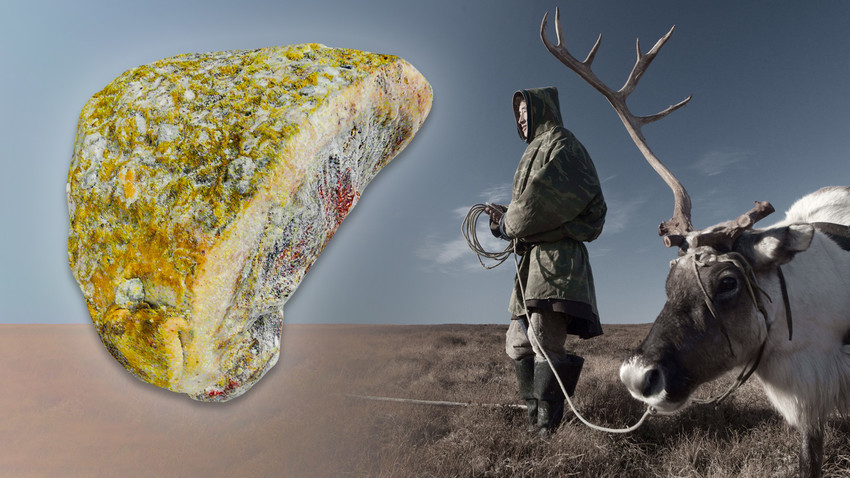 Russia Beyond (Photo: Kenneth Konkle/flickr.com; Legion Media)
It’s considered a delicacy among the peoples of the Russian North, but an unlucky passerby can die from it in the space of 24 hours. One such case occurred in the 1970s.

The traditional cuisine of Russia’s North may occasionally seem extreme to other Russians. Not everyone has the guts to drink warm deer blood, eat a thick blood soup, or try kanyga - partially digested deer stomach contents. And what’s for dessert, you ask? More of the same, we’re afraid: Northern ice cream is produced from the lard of a seal or a sea lion, despite the welcome addition of berries to the mix.

However, to really take it into extreme territory, the most extreme northern delicacy you can try is kopalkhen (sometimes called kopalkhem or kymgut). It is seriously capable of killing those who have not been eating it since childhood.

In the 1970s, a MI-8 research helicopter broke down on the island of Taymyr. Two pilots, three topographers and one local guide - a Nenets by the name of Savely Peresol. They ended up being stuck in the Siberian tundra with no means of communication, food or warm clothing. They waited for help - for one, two, then three days. No one came.

The group had begun to starve, surviving on what they could - lemmings, mushrooms, lingonberries. The nights were getting colder. The men thought they’d only had a couple of days to live. At that point, Savely suggested looking for edible provisions in the nearby swamp, to fill up on food and try to make it to the nearest Khatangi settlement. 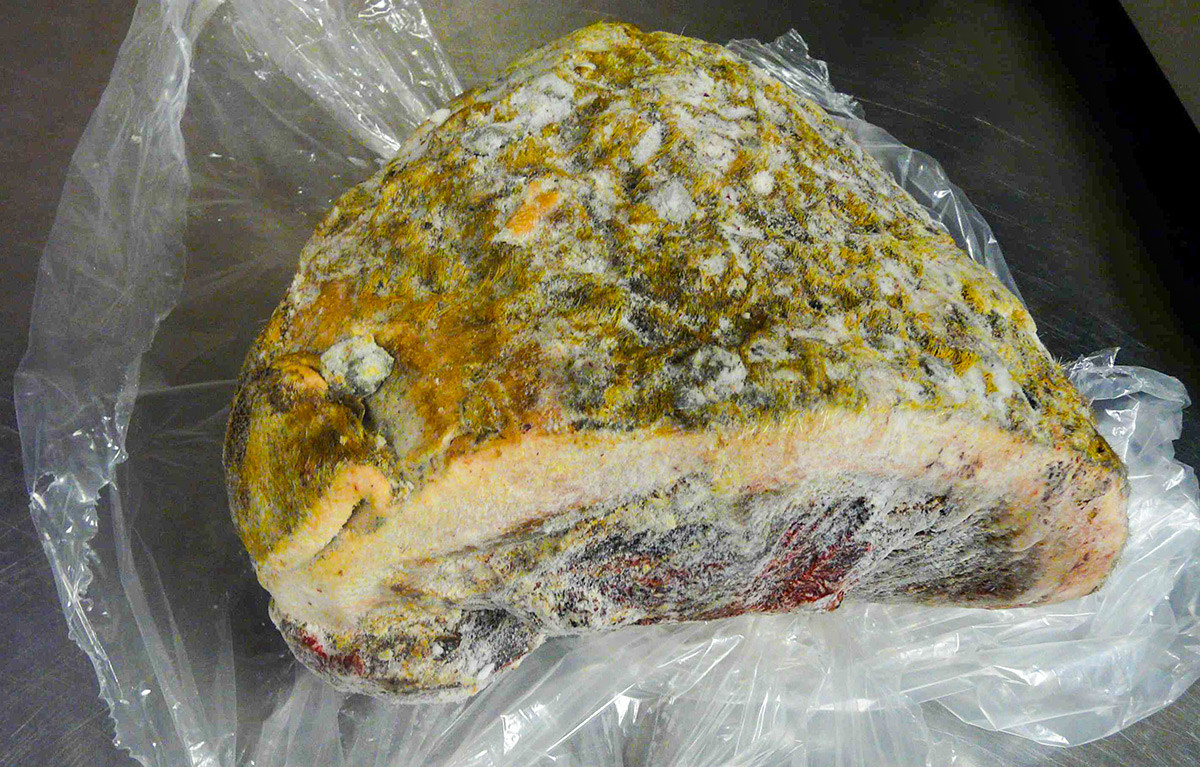 The guide was speaking of kopalkhen - the carcass of a fat deer that the Nenets drown in the swamps in winter, letting it rot for six months in a marked spot, before it is ready to be consumed. These cubbyholes can save the life of a lost local: They say if you’ve found some kopalkhen, you’re welcome to it, as long as you prepare another one to leave in its stead. And Savely, indeed, found what he was looking for: The group all shut their noses from the putrid stench and reluctantly proceeded to eat. 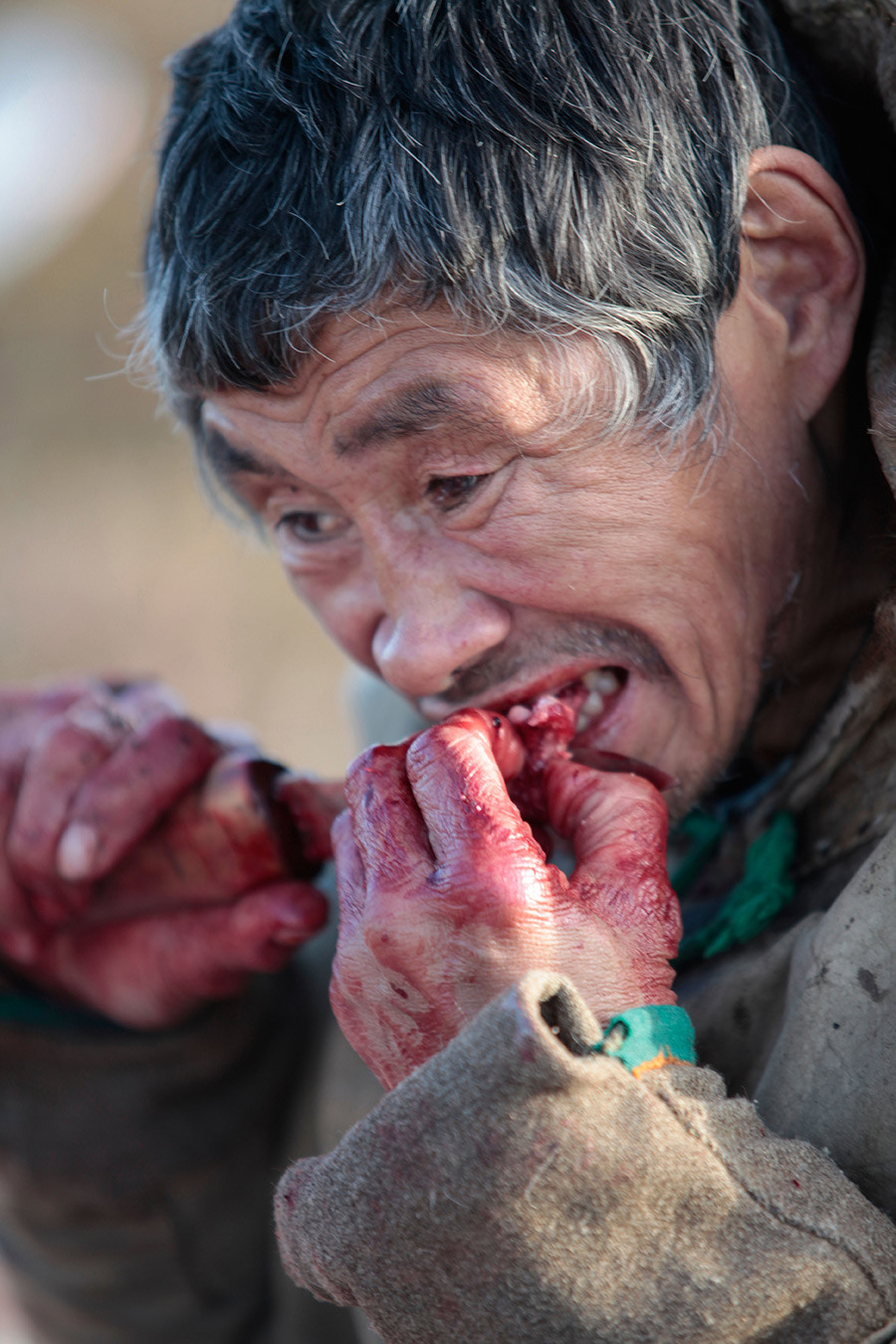 In the morning, the kopalkhen came back with a vengeance - in the form of vomiting, loss of consciousness and liver ache. Savely was the only one seemingly unaffected by the horrible symptoms. Having writhed in agony the entire day, two pilots and one topographer died, with the two remaining foreigners lying unconscious. As luck would have it, a rescue helicopter showed up soon after. One of the topographers was brought back from the brink of death. The other, unfortunately, died the following night. Savely would later be tried for “accidental manslaughter by way of poisoning” and handed a conditional sentence.

The case was described in ‘The Stories of the Forensic Scientist’, written by physician Andrey Lomachinsky. Not everyone knows of kopalkhen, unless they’ve lived in the North and mingled with the region’s indigenous peoples. Savely Peresol - a Nenets, appeared to have had no idea that eating the dish could have such disastrous consequences, especially as it’s often served to small children with no adverse effects.

More precisely, kopalkhen is essentially pickled meat. And it belongs not just to any animal, but one that has been killed in an appropriate manner. First, the deer is starved for several days. This way the stomach is cleaned out completely. The animal is then sent to slaughter, where it is strangled in a way that avoids damaging the skin and leaving cuts. The carcass is then submerged in a swamp, covered with sod and the spot is marked.

The meat “pickles”, i.e. rots, for the duration of the winter. In that time, microorganisms appear, gradually enriching the decaying body with vitamins. However, the carcass also produces poisons and toxins - cadaverine, putrescine, as well as neurine, which acts on the body in a similar fashion to that of a poison dart, due to the phosphoroorganic compounds found in such a weapon: the unlucky person begins to salivate profusely, with vomiting, diarrhea and convulsions, all resulting, most of the time, in death. However, kopalkhen does nothing of the sort to those who’ve grown used to it since childhood.

“It’s absolutely obvious that kopalkhen contains a wealth of energy for the body, as well as numerous microelements, necessary for the organism. Otherwise, it would be difficult to imagine how a marine hunter could survive an entire day on a floating ice sheet out in the Arctic, having had just one portion - all without hunger and loss of strength,” Yury Rytkheu wrote in his essay on the Chukotka. 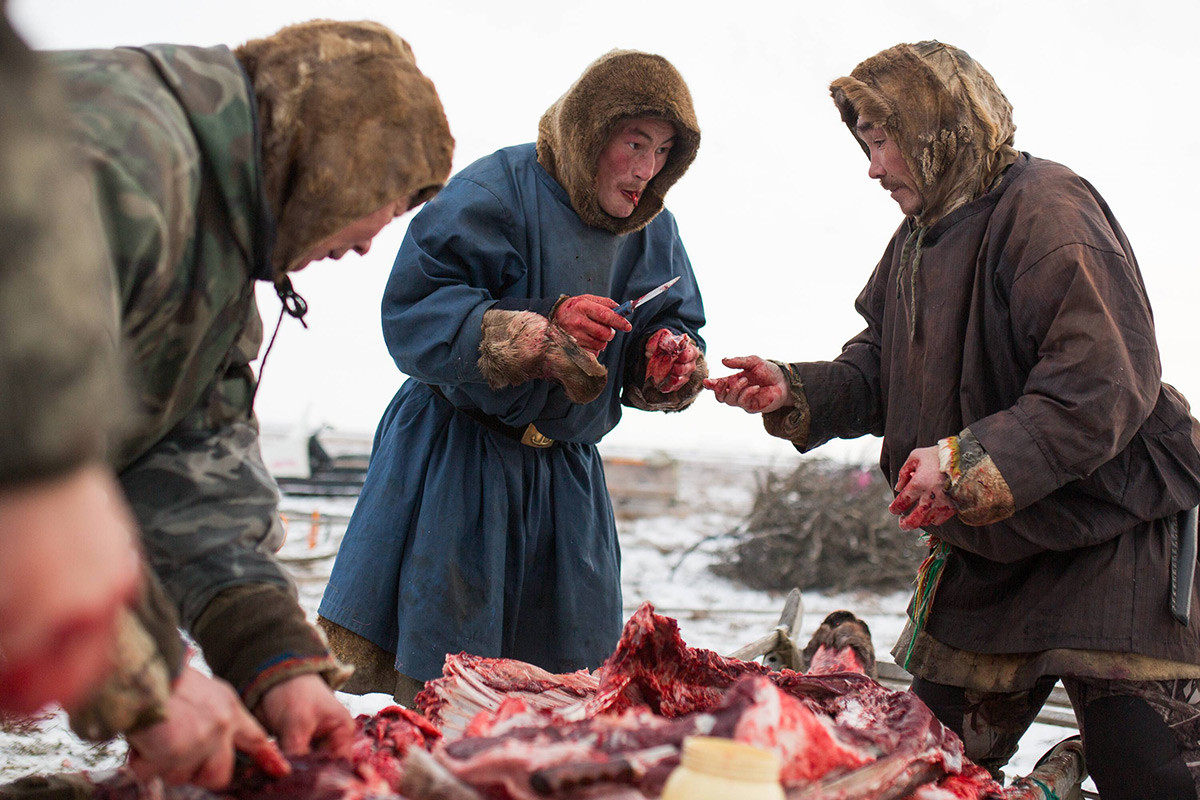 Kopalkhen is considered a national dish by the Nenets, Chukchi, Khanty, Eskimo, Evenk and Ngasan peoples. Particularly harsh living conditions are what gave birth to this “natural” delicacy, which can be stored for years in ice and swamps, while still remaining calorically dense and offering numerous health benefits. As for the potential, slight discomfort of painful death, it is addressed by acclimatizing young organisms to the dish from early on. Children’s bodies develop a natural immune defense against all the poisons. On top of that, the Arctic Circle’s inhabitants actually have a completely different stomach environment to the one found in their European brethren (the acidity levels would have resulted in a bad case of gastritis or a full-blown stomach ulcer for someone from Moscow). If someone who is not local were to try kopalkhen and not die, they would, at the very least, get trichinellosis - a disease that borrows its name from the nasty parasite that lives in raw or undercooked food. 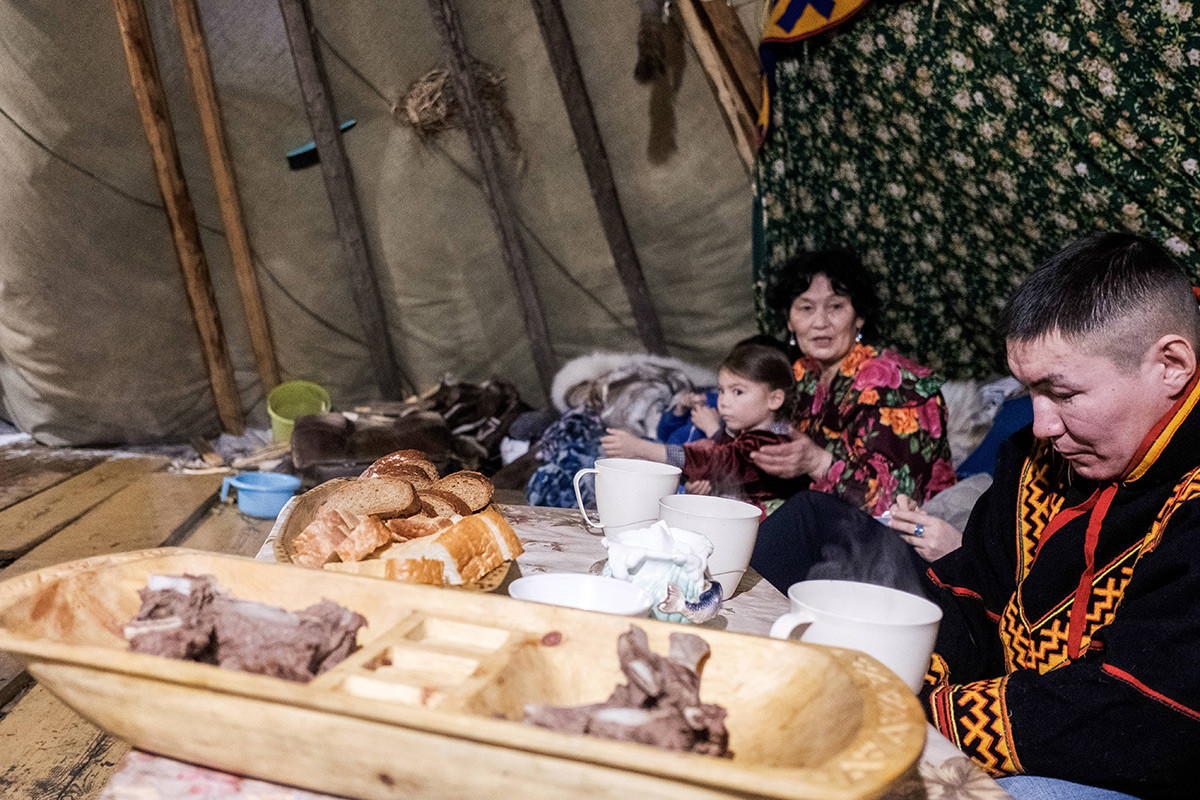 A reindeer herder having a meal in a chum in the village of Gornoknyazevsk, Priuralsky district.

A whole family can sustain itself on one kopalkhen for a whole month, which is extremely convenient, considering the harsh winter conditions. The frozen meat is cut into thin strips, which are rolled into little tubes and dipped in salt. The dish is especially delicious when consumed with the raw lungs of a freshly slaughtered deer and a small amount of yunev, which is a sort of relish derived from the leaves of the locally-growing rhodiola plant.

The taste of kopalkhen is reminiscent of bitter, unsalted animal fat - although, there are other comparisons. According to Rytkheu, “the cross section of a real, well-preserved kopalkhen exhibited a rose shade, which gradually transitioned into green near the fat layer, while being slightly harsh to the taste, like a well-cured French cheese with mould.”

What other forms does kopalkhen take?

Eskimo and Chukchi peoples also like to make kopalkhen from sea lions, seals and whales (the deer variant being more of a Nenets and Chukotka preference).

The sea lion is clubbed as they lie by the water, in late fall, ahead of the arrival of drifting ice. The skin is peeled in large sections, together with fat and meat. The inside of each piece is then seasoned with a mixture of herbs and lichens, before it’s stitched up using string made from the very skin, then fashioned into rolls. Sometimes, bits of liver, heart and kidneys are rolled together with the other ingredients. The resulting portions are laid into special permafrost pits, lined with stones. Instead of rotting, the effects of the permafrost “pickle” the meat, the same way a conventional meat locker would.