A brief history of Kvass, Russia’s ‘bread in a bottle’ 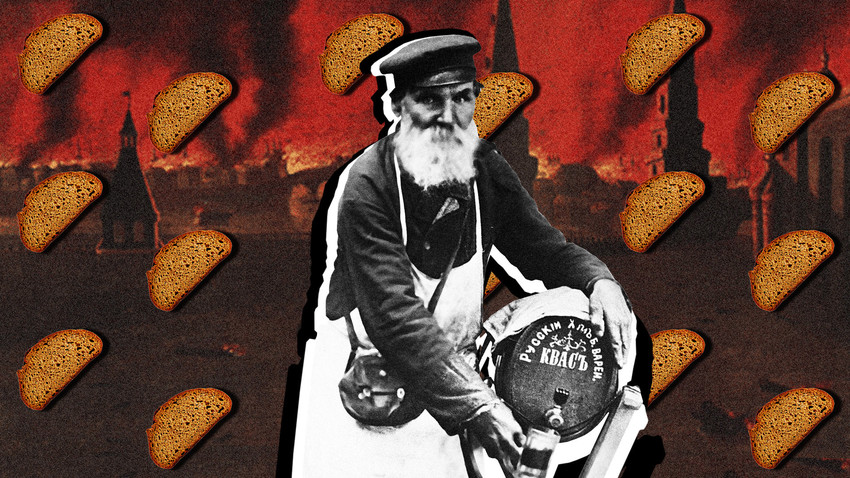 Kira Lisitskaya (Photo: Legion Media; Sputnik)
Who invented kvass? What is the link between kvass and patriotism? Why was all champagne at the tsar’s court replaced with kvass? What “killed” its popularity? Here is a brief history of Russia’s most popular summer drink.

You cannot even begin to imagine how many varieties of kvass Russians have invented. Sweet, sour, mint, with raisins, apple, pear, honey, with pepper, with horseradish, thick kvass, soldier’s kvass... To be fair, they had at least 10 centuries to come up with all these varieties. By the beginning of the 19th century, there were over a thousand recipes. Kvass - a fermented drink made from flour and malt or rye bread – became something of a national bond, if you like, and once even a part of big politics. But let’s start at the beginning.

It is not known for sure when the country’s main cold drink first appeared in Russia. Most likely, it was not even invented by Russians. Something resembling kvass existed in Ancient Greece and Ancient Egypt. In the 5th century BC, Herodotus mentioned a drink called ‘Zyphos’: it was made by soaking bread crusts and the resulting fermentation producing a drink similar to kvass. 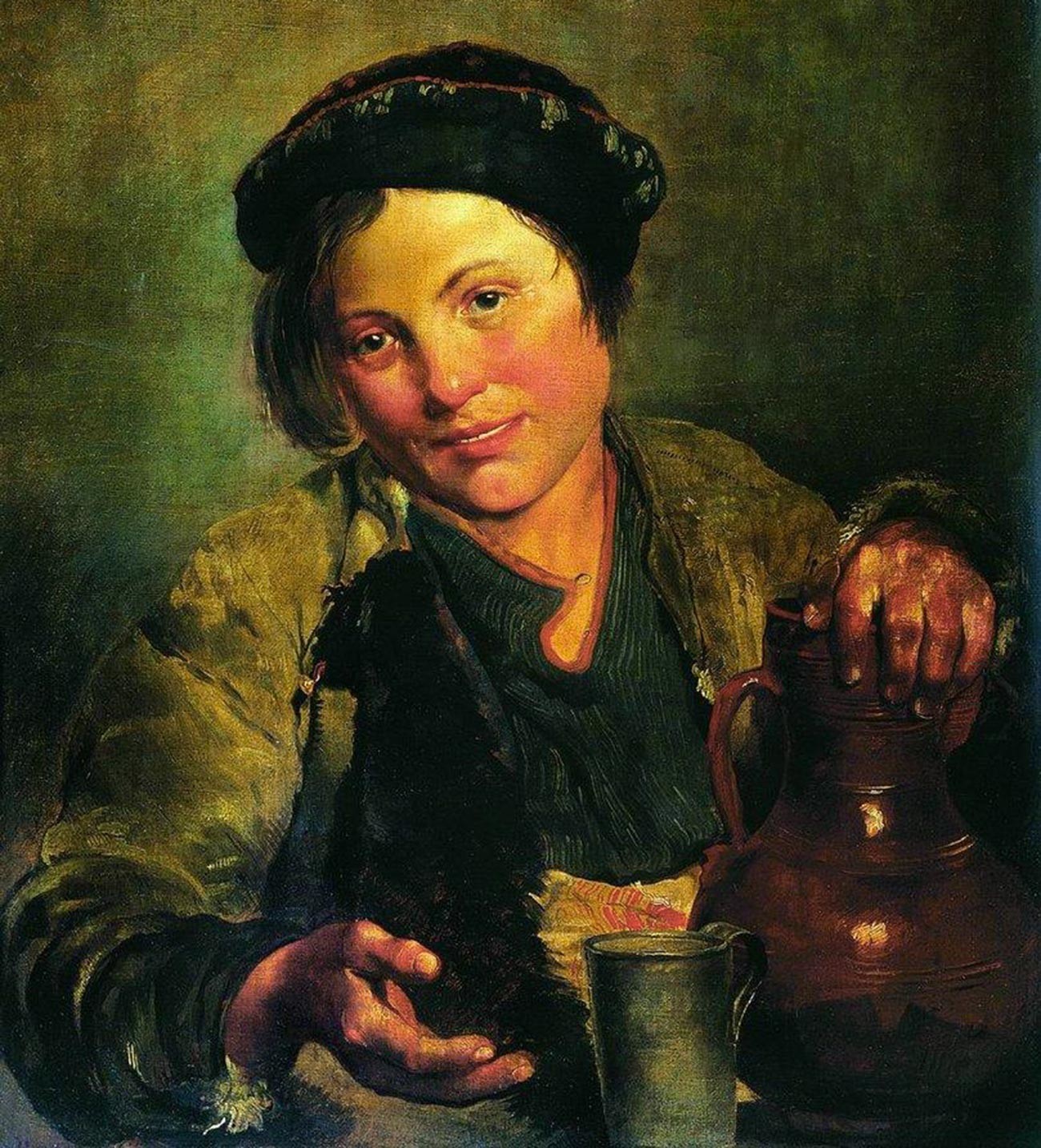 Thus, it would appear that kvass was made everywhere, but due to a combination of several factors - the availability of ingredients, plus the weather conditions - it took root in Russia. The first written mention of kvass can be found in a 996 chronicle: by order of Prince Vladimir, newly converted Christians were treated to “food, honey and kvass”. Over time, in other countries, drinks of this kind evolved into something else (for example, beer), while kvass remained a Russian “invention”. But, the most interesting bit started after kvass developed the status of a “national” drink.

Who drank kvass and why did they drink so much of it?

Kvass was a drink consumed by literally everybody: peasants, soldiers, doctors, monks, tsars. Every family had its own recipe for making it - hence the great number of different varieties. In that respect, it is not unlike borsch: the general rules for cooking it are the same, but everyone makes it with their own nuances. All the more so, since kvass offers a lot of room for experimentation: the difference could be both in the quantities and types of ingredients, as well as in the peculiarities of the cooking process itself. 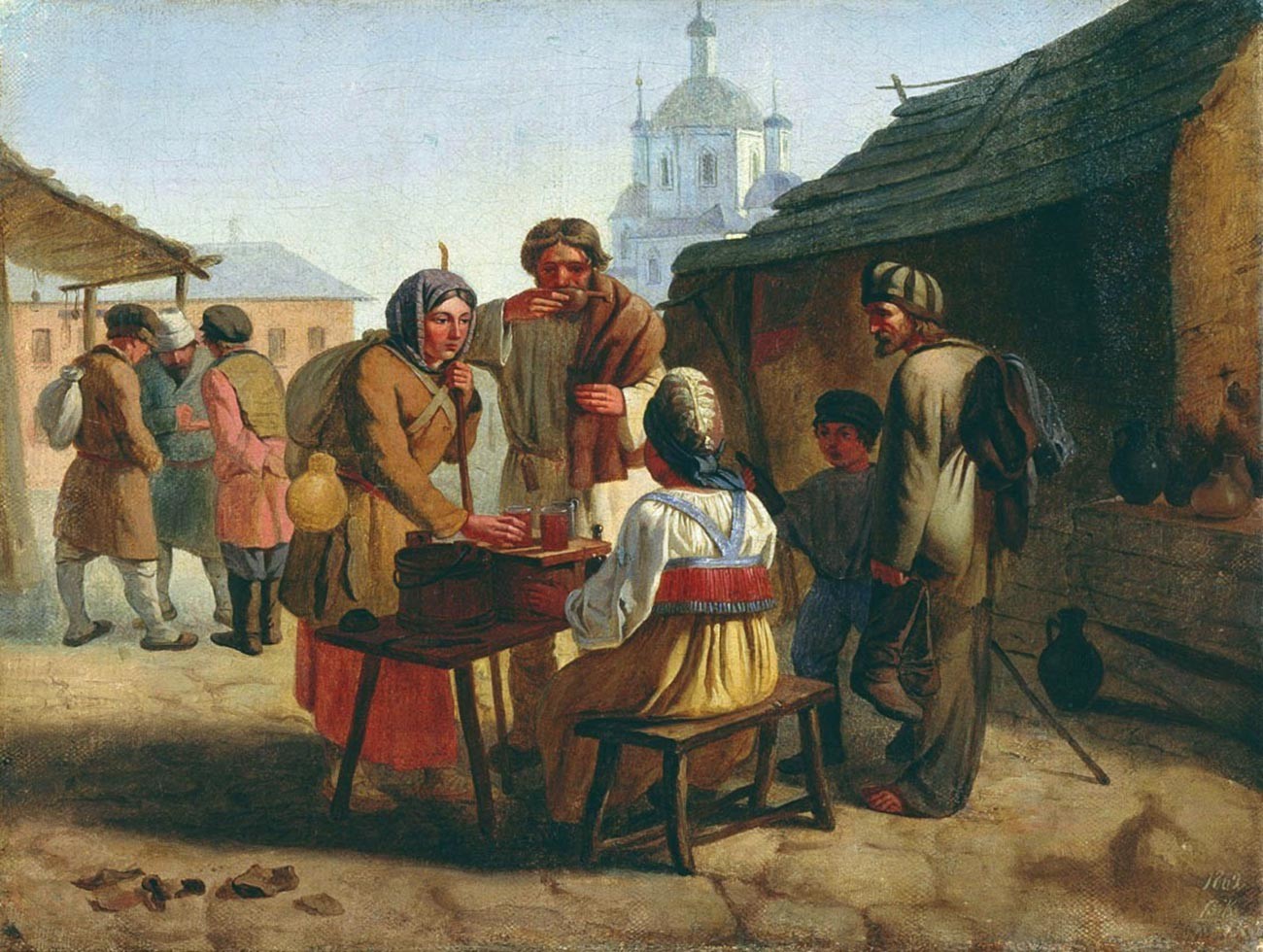 For example, to prepare the wort (bread or flour with water added and left for fermentation), either cold or hot water could be used - and the result depended on the choice between the two. Or the time the wort was kept in the oven or in the vats varied, too. Finally, the barrels where the kvass was supposed to ferment could be coated with sugar, hops, mint, raisins, honey, etc.

In Russia, kvass was an everyday drink, like tea is now. “Same as with bread, you can never get bored of kvass,” says a Russian proverb. Furthermore, kvass used to be considered proper food, that is why the verb used with it was to “eat” rather than to “drink”. In times of famine, it allowed people to survive, laborers took it with them when they went working in the fields or to do other hard work. Although it was liquid as it is now, it created a feeling of fullness. It also served as a basis for dozens of different dishes: from okroshka (basically, a salad with kvass) to tyurya with scallions (a bread crust soup). 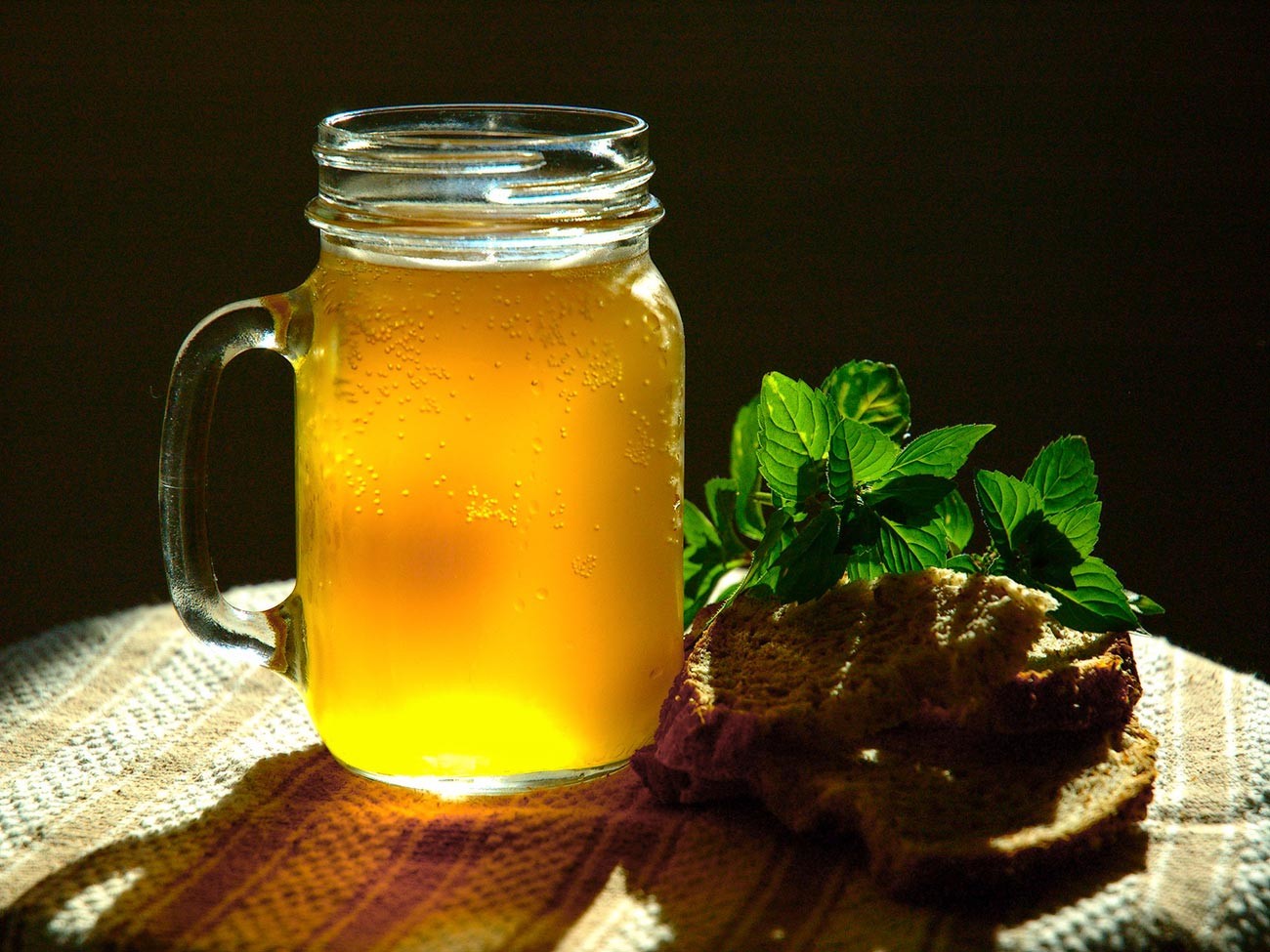 Since the 12th century, there emerged a distinction between kvass as a low-alcohol sour drink and as a highly intoxicating drink. The latter was called tvoryonny (created), that is brewed, not just naturally fermented. Unless brewed, natural fermentation in kvass stops alcoholic fermentation and the resulting drink contains not more than 1-2% alcohol, whereas tvoryonny kvass has the same alcohol by volume as wine. That is why kvass was also appreciated for its ability to turn into alcohol.

That gave rise to a dedicated profession – kvasnik (kvass brewer). Each kvasnik specialized in a certain variety of kvass and was named accordingly (apple kvasnik, barley kvasnik, etc.). Each kvass brewer worked in their own neighborhood, venturing outside of which was fraught with trouble: there was a clear division of territory between kvasniks, which helped deal with stiff competition. 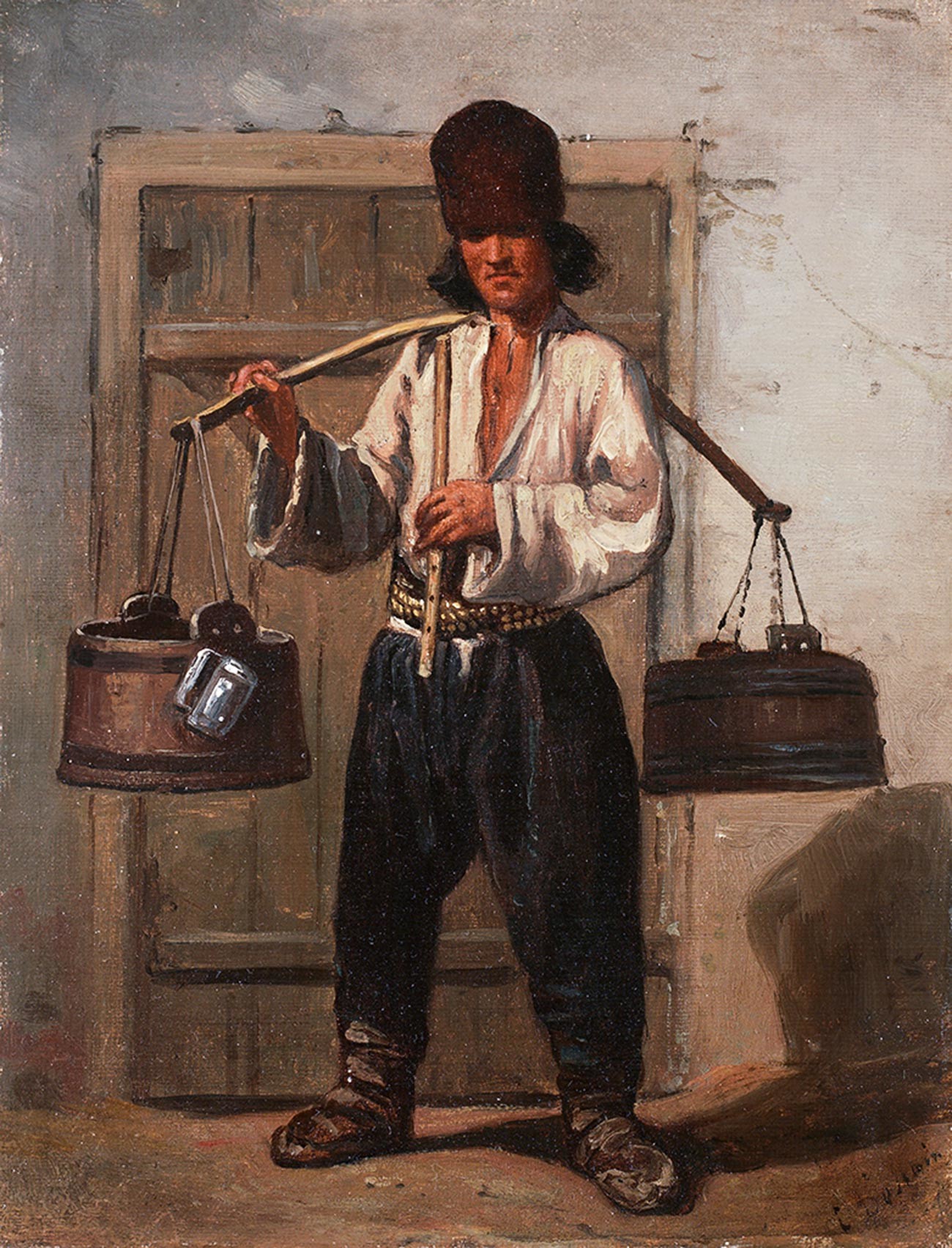 Finally, there is another theory explaining the enormous popularity that kvass enjoyed. “The reason is simple: there was a lack of clean drinking water. The more densely populated a country was, the more acute this issue became, causing epidemics and mass foodborne outbreaks. Whereas, a fermented drink (like, for example, kvass or cider) was practically safe from a sanitary point of view,” says Russian cuisine historian Pavel Syutkin.

An ancient talisman and link to patriotism

And yet, kvass was valued not only as a means of preventing epidemics. It was so popular that it acquired sacred and mystical properties and became a quasi talisman. Young women poured it onto the benches in bathhouses during the washing ceremony before their wedding (and drank the rest), while men used kvass to extinguish fires caused by lightning, since they believed that only kvass or milk could cope with this form of “God’s wrath”. According to one version, they threw a hoop from a kvass barrel into a fire to prevent it from spreading. According to another, they actually poured kvass onto the fire to put it out. 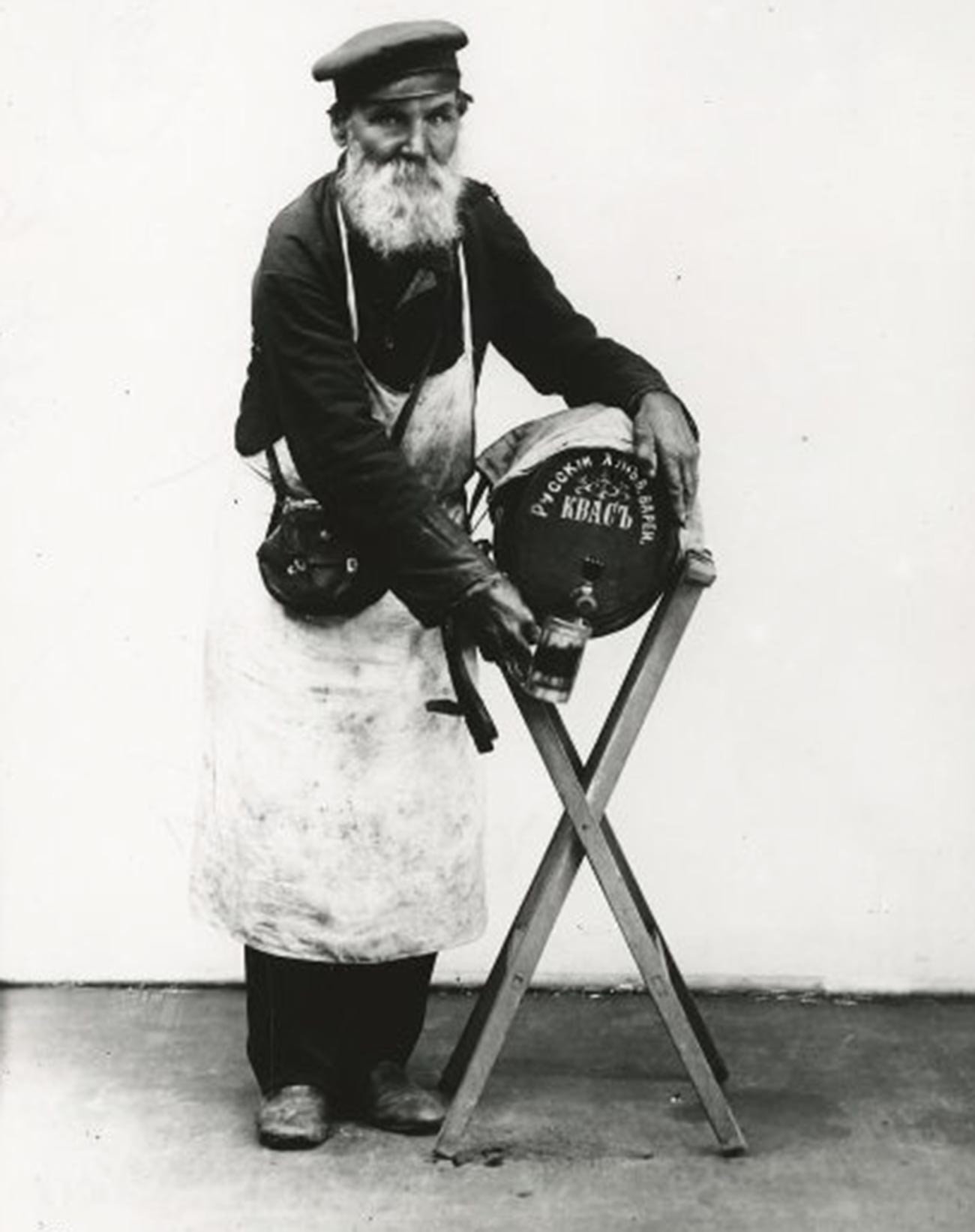 At court, there was a lot of faith in kvass, too, but mostly in terms of its phenomenal health benefits. The word kvass derives from the same root as the old Russian word for “acidic”,and lactic acid was considered to have a beneficial effect on the body. Kvass was loved by military commander Alexander Suvorov and tsar Peter the Great, who drank it every day. Prince Mikhail Golitsyn, who was demoted to the post of a court jester, was nicknamed Kvassnik: his duties included pouring kvass for Empress Anna Ioannovna. 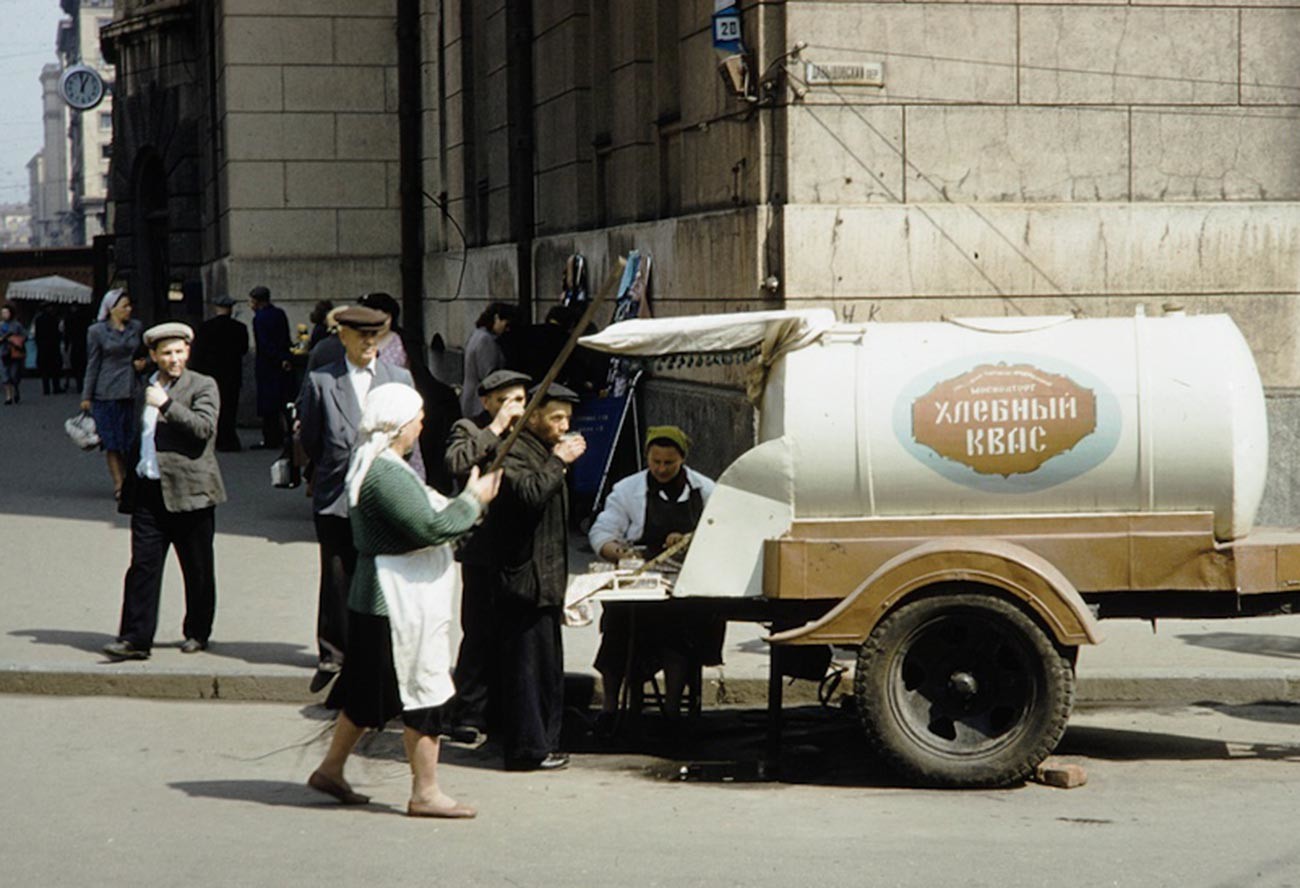 Kvass’ popularity peaked after the war with Napoleon in 1812, as Russian nobility began to demonstrate their patriotism... yes, through kvass. “As a matter of urgency, champagne was replaced with kvass, which was served at balls in crystal glasses,” says Pavel Syutkin. Inevitably, this ostentatious, official Russophilia soon became a source of irony. That was how the expression “kvass patriotism” was coined. Its author is believed to be Prince Vyazemsky, a literary critic and a close friend of Alexander Pushkin, who in his Letters from Paris (1827) said: “Many take patriotism to be unconditional praise for everything that comes from their own country. Turgot called it servile patriotism, du patriotisme d’antichambre. We could call it kvass patriotism.” 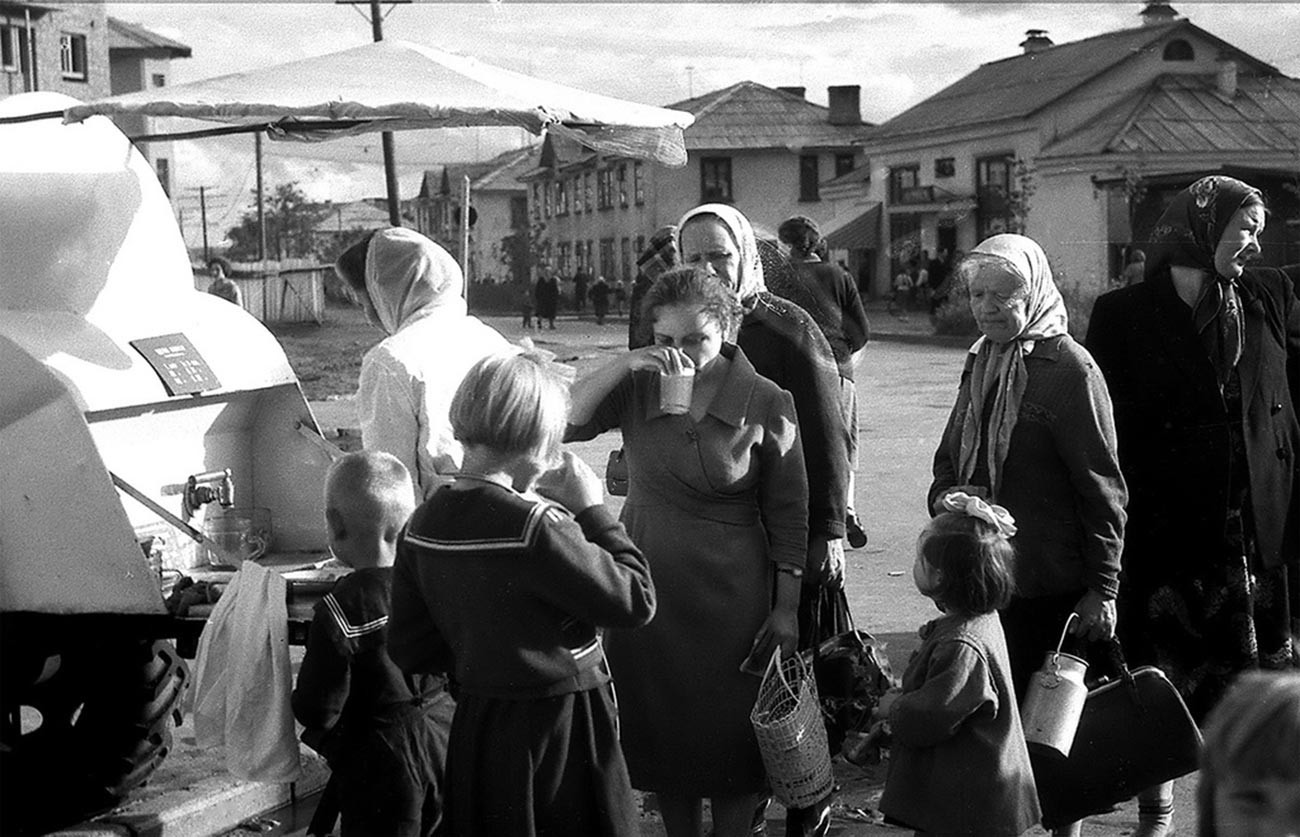 And yet, from the second half of 19th century, kvass began to lose its positions: it and similar sour flavors lost popularity in the aristocratic circles and started to be considered part of the so-called “vulgar” diet. At the same time, kvass continued to enjoy popularity among junior civil servants, merchants, members of the middle class and peasants. As a physician to Catherine II wrote in 1807: “One of the oldest physicians-in-ordinary, doctor Rogerson, a former favorite physician-in-ordinary of Catherine the Great, finds that from the point of view of hygiene, sauerkraut, pickled cucumbers and kvass are extremely good for the common people of St. Petersburg and protect them from various diseases that could develop in them under the influence of the local climate and their immoderate way of life.”

With the start of industrialization in the middle of the century, kvass brewing became less widespread, even in ordinary households. In a bid to preserve the kvass heritage, the Russian Society for the Protection of Public Health took patronage over the drink and started to produce it at hospitals. By that time, for a whole century already, hospital kvass had been part of the mandatory allowance of army and navy personnel and prisoners. Wherever a regiment was based, there was an infirmary and where there was an infirmary, there was also a cold room with kvass. If there was a shortage of kvass, the problem was reported to the senior command with a demand to immediately allocate funds for the purchase of more malt. 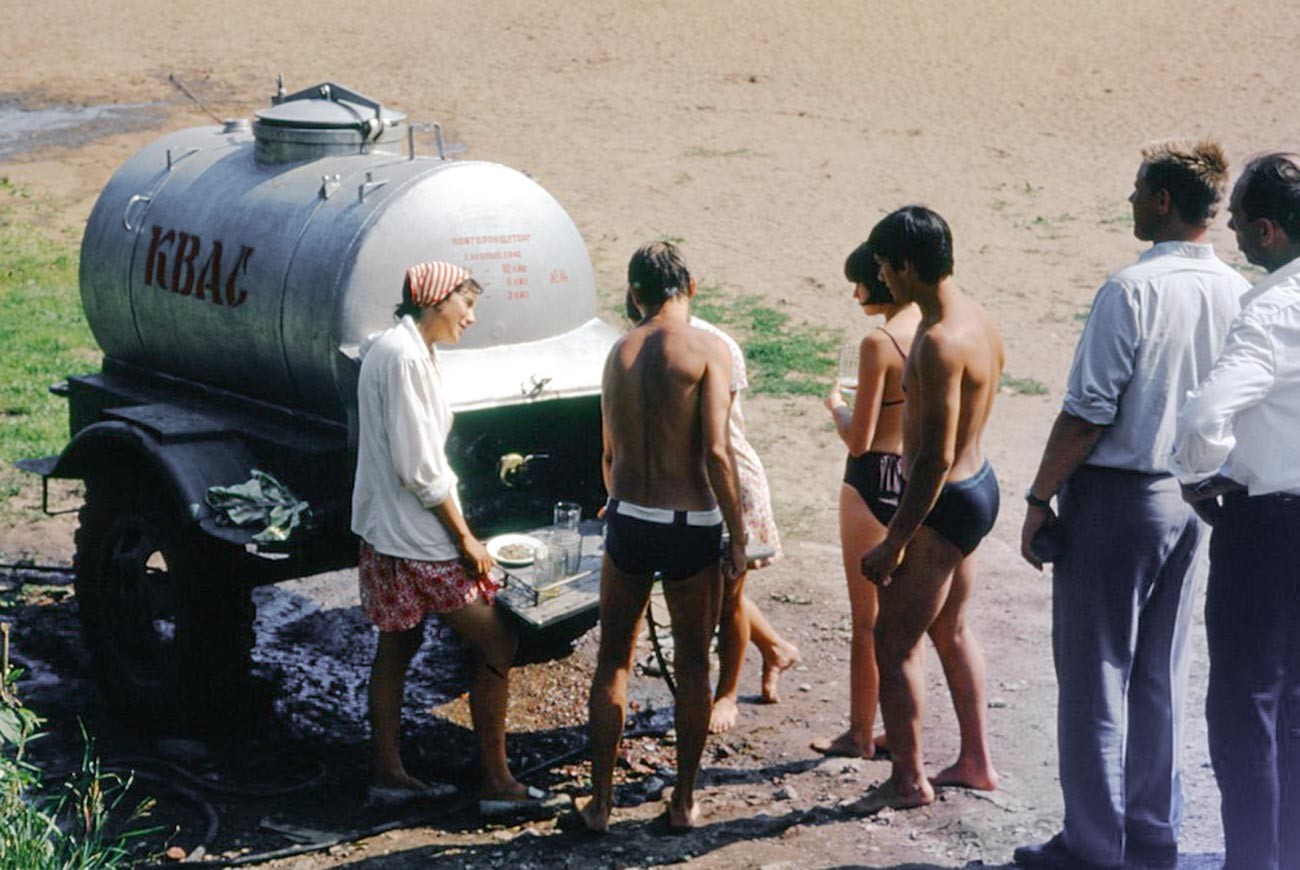 However, a major setback for kvass came in 1905 when regimental infirmaries and hospitals replaced it with tea. The main reason was that kvass was much more difficult to prepare and store while on the march. Since then, kvass has ceased to be an essential drink of the Russian people and become more of a favorite one. In Soviet times, it was sold on draught, not from wooden, but from yellow metal barrels, which would pop up all over the country from the moment it became warm and until fall.

In post-Soviet Russia, kvass began to be sold in bottles, too. These days, bottled kvass can be found in every store. By the way, traditional yellow barrels have not disappeared, either. Kvass in them is prepared under a standard recipe and can no longer boast of a variety of flavors, but this “ordinary” kvass has its staunch fans, too.