How does Russian borsch differ from Ukrainian? 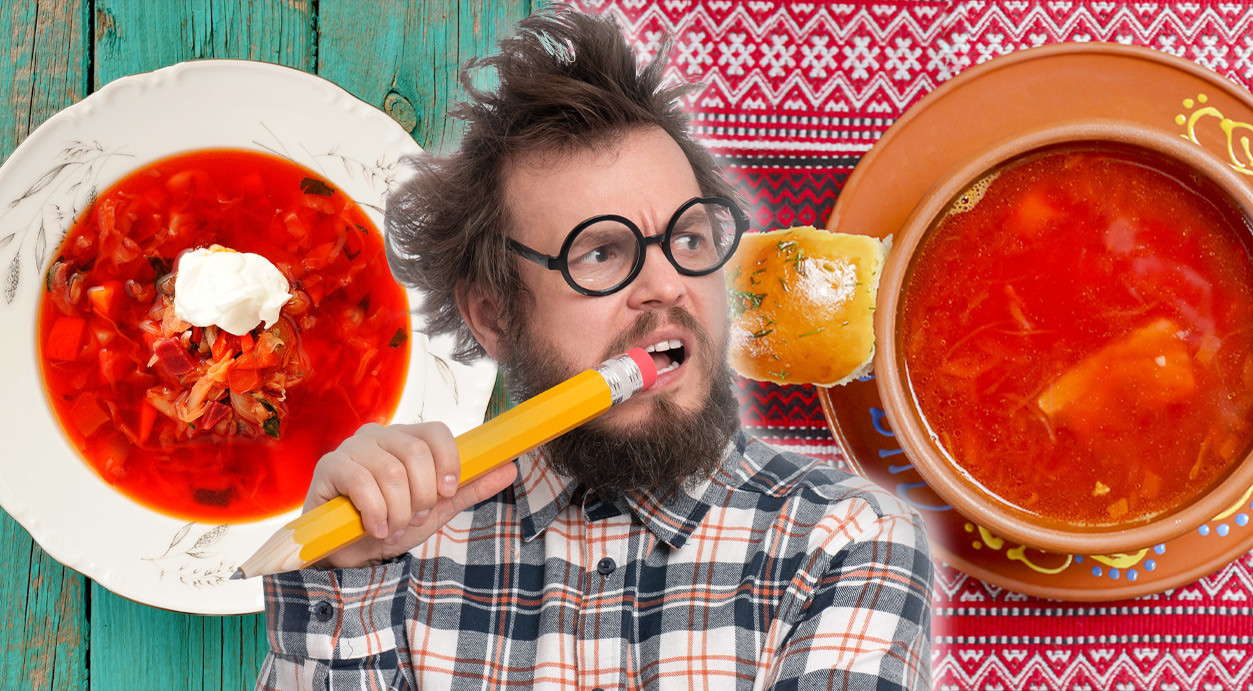 Getty Images; Legion Media
This dish is common to many Slavic peoples, and they all consider theirs to be the one true recipe.

Russian and Ukrainian cuisines have a lot in common, which is hardly surprising given the close proximity and kinship of these two nations that were joined at the hip for nearly four centuries no less. In Soviet times, “friendship of peoples” was one of the pillars of the state ideology, and food was part of it: regional dishes merged into one Soviet cuisine, which included Uzbek pilaf, Caucasus shashlik, Siberian pelmeni, and an old Slavic staple first course — borsch.

In fact, a dish by that name has been cooked by East Slavs since time immemorial (well almost, it was first mentioned by Russian chroniclers in the 16th century), and similarly named dishes are found not only in Russia and Ukraine, but also Belarus, Poland, Romania and Moldavia. Everyone has their own variety. And in the legendary Book of Tasty and Healthy Food, the culinary bible for Soviet folk (first published in 1935), borsch recipes take up several pages and all are very different.

Not what it used to be 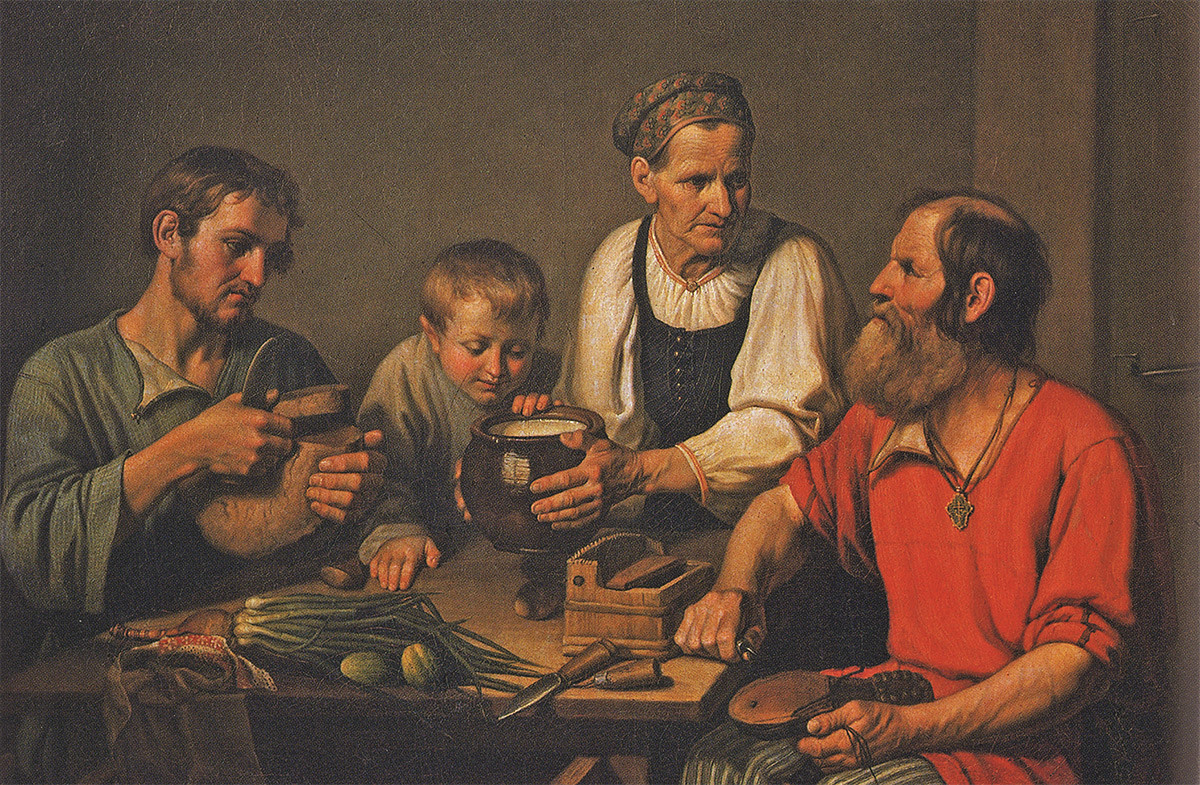 Today, the word “borsch” conjures up a mental image of dark red soup made from beetroot and cabbage. However, the name originally referred to a soup made from an edible variety of hogweed (Russian: borschevik), a plant similar to giant dill (its modern variety, Sosnovsky's hogweed, in summer is a highly poisonous weed, but in antiquity the plant was entirely edible). The leaves were fermented and then added to the soup.

Later, a version of borsch appeared that was based on beet kvass, which was diluted with water, filled out with cabbage and carrots, and left to simmer in the oven. Only later did people start to use a meat broth base, which peasants could afford only on holidays, so all other times they added salo (lard) with garlic to make it more filling. “One of the first authentic recipes for beet borsch is found in Vasily Levshin's Dictionary of Cookery in 1795,” writes culinary historian Pavel Syutkin. “It contains a list of ingredients for borsch: ‘beef pieces, ham and chicken stewed in water...’.”

Each to his own

“Borsch is just a term that everyone assigns their own meaning to,” says culinary expert Olga Syutkina, adding that the soup ingredients were mostly simple and affordable, and differed from region to region. “In southern Russia and Ukraine, there was a wide choice of fresh vegetables, but further north people had to pickle them for the winter,” she says. 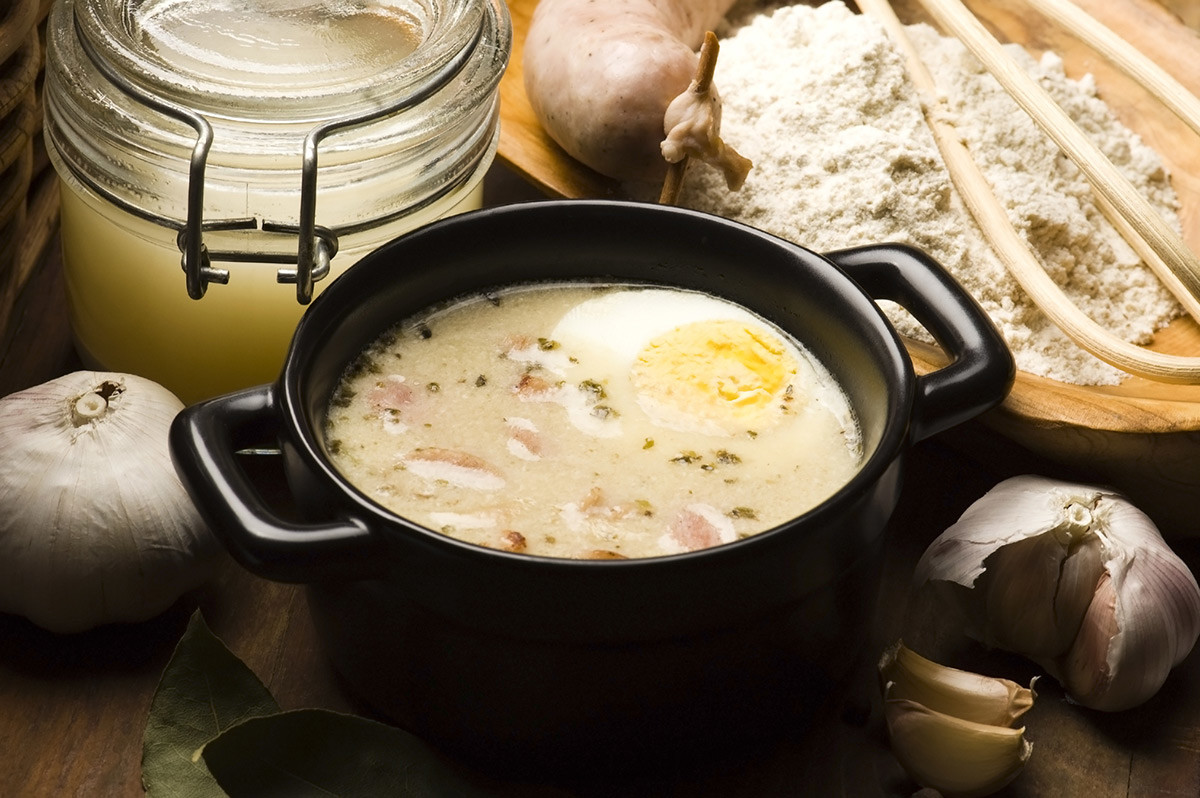 That is why the Slavic peoples have so many different borsch recipes, which vary not only regionally, but also according to the weather — summer beet-based vegetarian soup is called kholodnik ("cold soup") or svekolnik ("beetroot soup"), and these too are varieties of borsch. 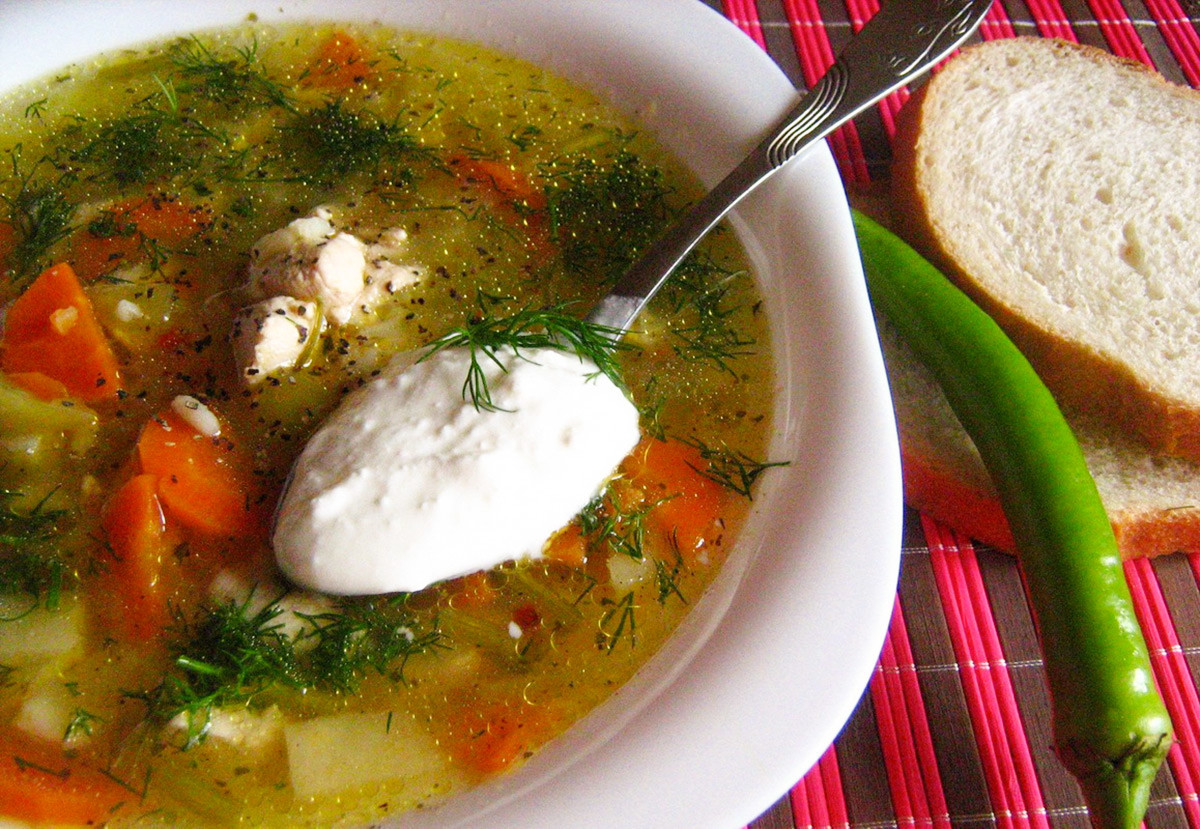 In Poland, people eat so-called “white borsch” based on sourdough made from rye flour, with boiled egg and sausage instead of beetroot. There are also fish and mushroom varieties. In Romania, they have a sour vegetable soup with kvass that is called borsch. In southern Russia, there is the delicious "Taganrog" (aka "monastery") borsch, made not from beetroot but tomatoes (which used to be exotic for Russian cuisine, but never in Taganrog, a port city, where they were commonplace) and based on oxtail or chicken broth (never pork). Borsch is also prepared with beans or potatoes.

In modern Russia, Ukraine and Belarus, hot red borsch is the most popular version, served with smetana (sour cream) and bread, but there is no definitive recipe — not only in one country, but even in one region.

So how do Russian and Ukrainian borsch differ? 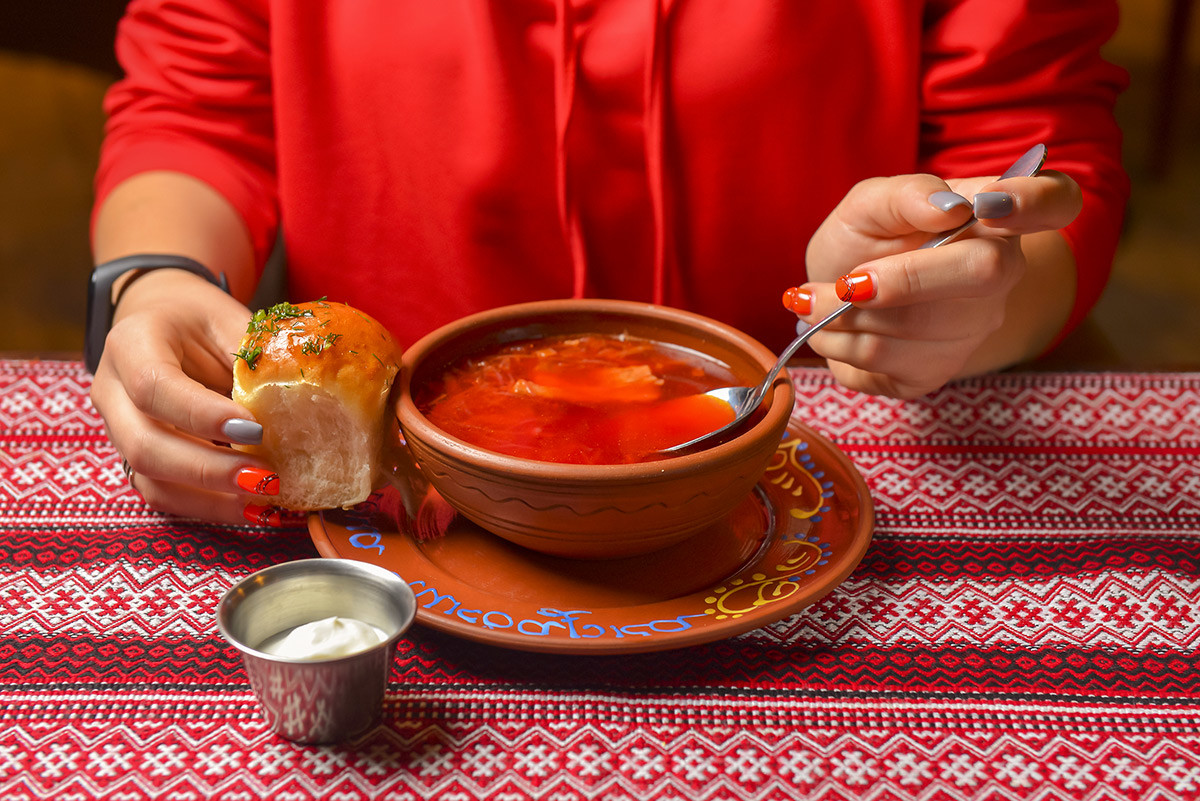 Borscht with sour cream and buns.

For Russians (and most people who remember the USSR), the word “borsch” generally means a mixture of anything that comes to hand. And that’s fair enough, since the soup has no single recipe, as we’ve established.

The cooking process itself is the cause of fierce culinary debate: under any recipe on a Russian-language website you will see comments like: “You can’t cook to save your life”; “You’re making slop, not borsch”; “Your recipe is just cabbage soup with beetroot”. 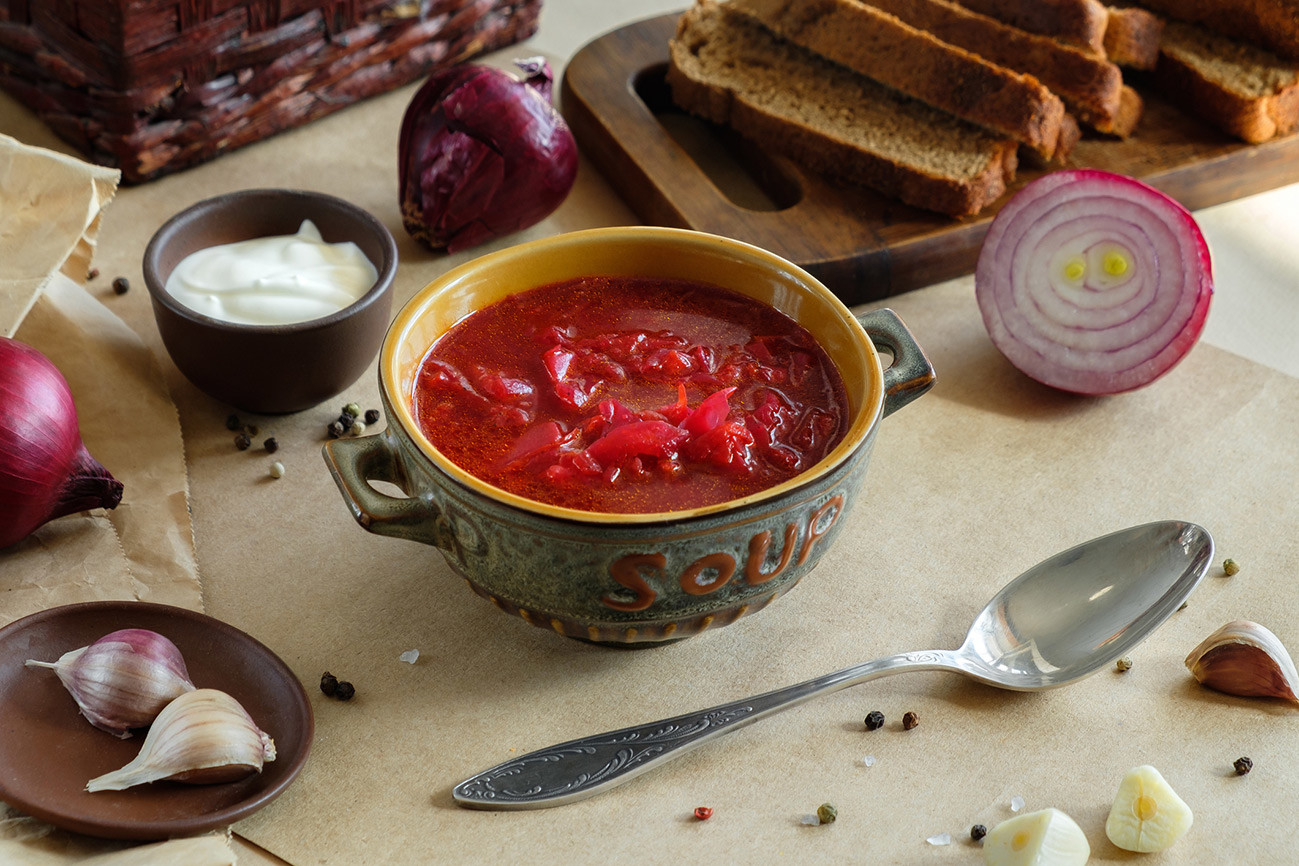 First, the broth. It is generally considered that Russian borsch is based on beef bone broth, and Ukrainian on pork ribs, but that distinction is tentative to say the least. Borsch can be cooked in chicken broth or water. Svekolnik, for example, is generally based on kefir (fermented cow’s milk).

Second, the cabbage. Some chefs write that sauerkraut predominates in the Russian version, which is added at the start so that it becomes soft, while the Ukrainian version prefers fresh cabbage added at the end of the cooking process so that it remains chewy; still others ditch the cabbage, asserting that beans are the be-all and end-all of borsch. As for Belarusian borsch, that is likely to be served with potatoes.

Third, the beet variety. Those in the know say that beet used for vinaigrette should not be added to borsch, because it won’t give the desired color. 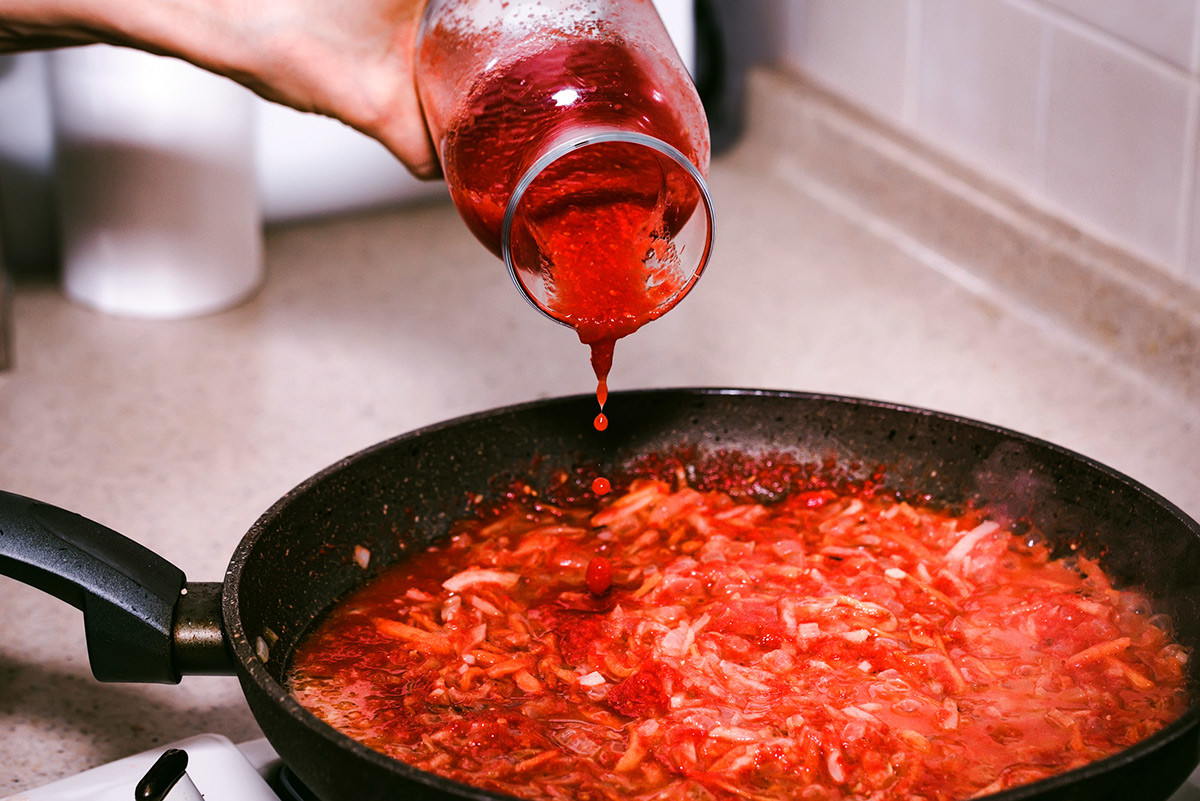 And, most important of all, the extra ingredients! Modern chefs in whatever country often add tomato paste with carrots, onions and beetroot to make their borsch juicier and brighter. Meanwhile, borsch traditionalists remain staunchly anti-tomato. Some like to add vinegar, lemon and sugar (yes, straight in the soup!), cook the broth with unpeeled onion, or use pork scratchings as well as meat. 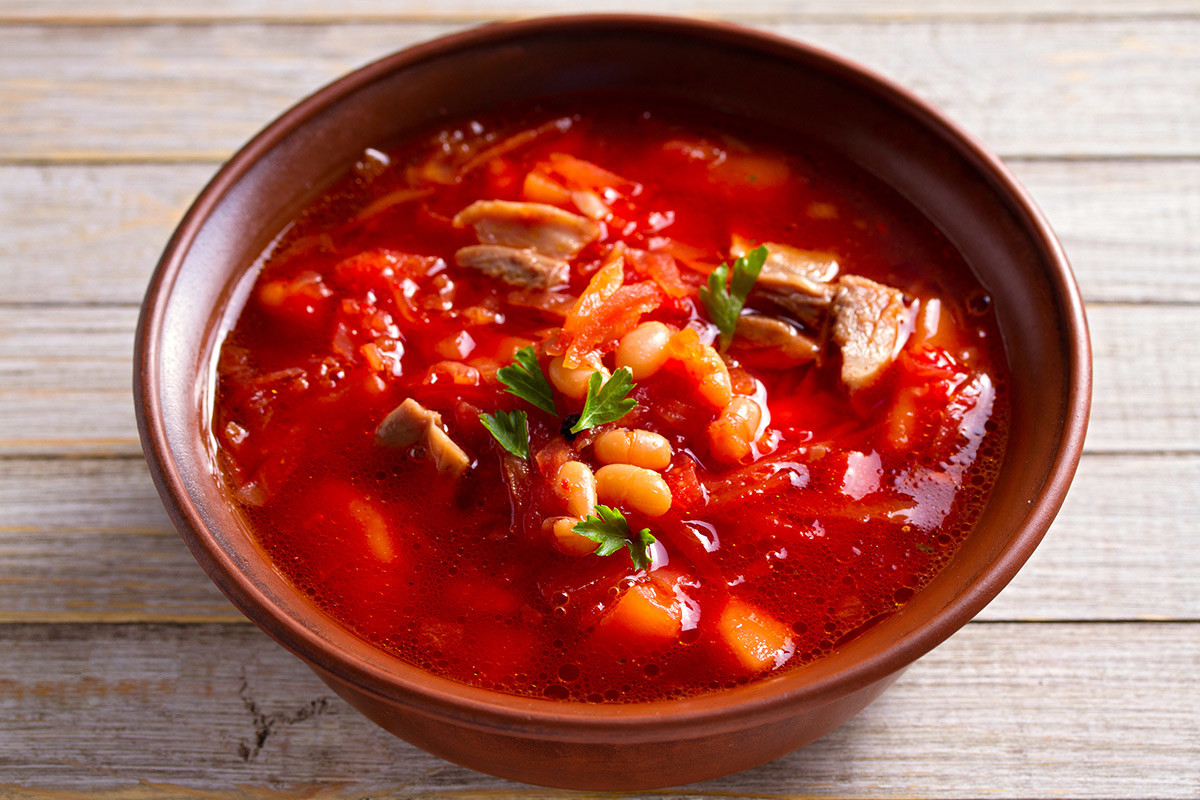 Interestingly, the easiest way to distinguish the origin of borsch is by the way it is served: most often, Russian borsch is served with black (rye) bread, and Ukrainian with garlic pampushka rolls; Belarusian borsch is sometimes additionally decorated with herbs and half an egg. But it’s not an exact science.