Kolobok: A real-life meat and potato meal with origins in a Russian fairytale (RECIPE) 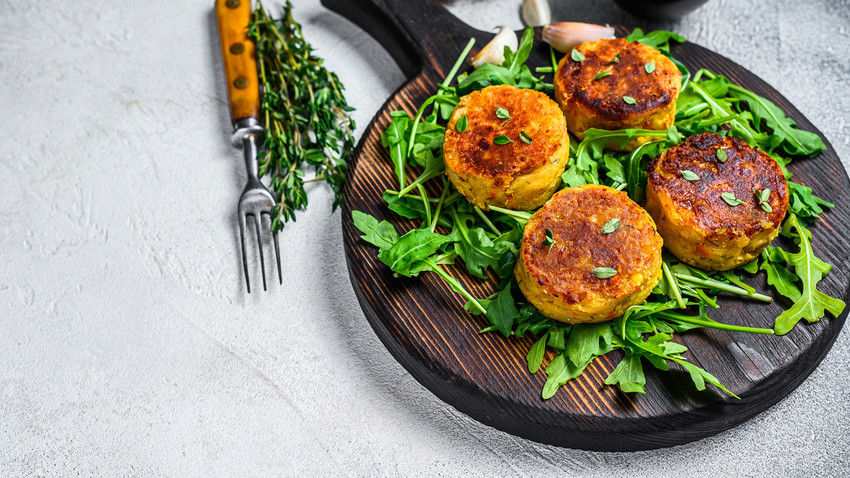 Here’s a way to eat like you’re living inside a Russian fairytale.

Legion Media
With its delectable taste and folklore origins this dish will be the star of your dinner.

“Kolobok, Kolobok, I’m going to eat you”. That’s what the animals in one old Russian fairytale say when they see this small, round fried bun made by an elderly village couple. The main character was so naïve to the intrigues of the world that after he sang a song almost everyone let him travel further. Until, he ran into the sly fox who fooled him by deceit and cunning, eventually devouring him.

This fairytale reminds one of American Johnnycake since it’s also made of simple ingredients that peasants had in their barns. For example, Johnnycake was made with corn, while Russian kolobok, according to the description in the fairytale, was made using a mix of grain - wheat, rice, barley.

That probably gave birth to the idea of making something like kolobok in real life, and so it appeared on the tables of poor peasants across Russia.

Later on, kolobok obtained a new taste. When potato became a well-known and nationwide staple, housewives began to substitute grain with mashed potatoes, and the result was remarkable. 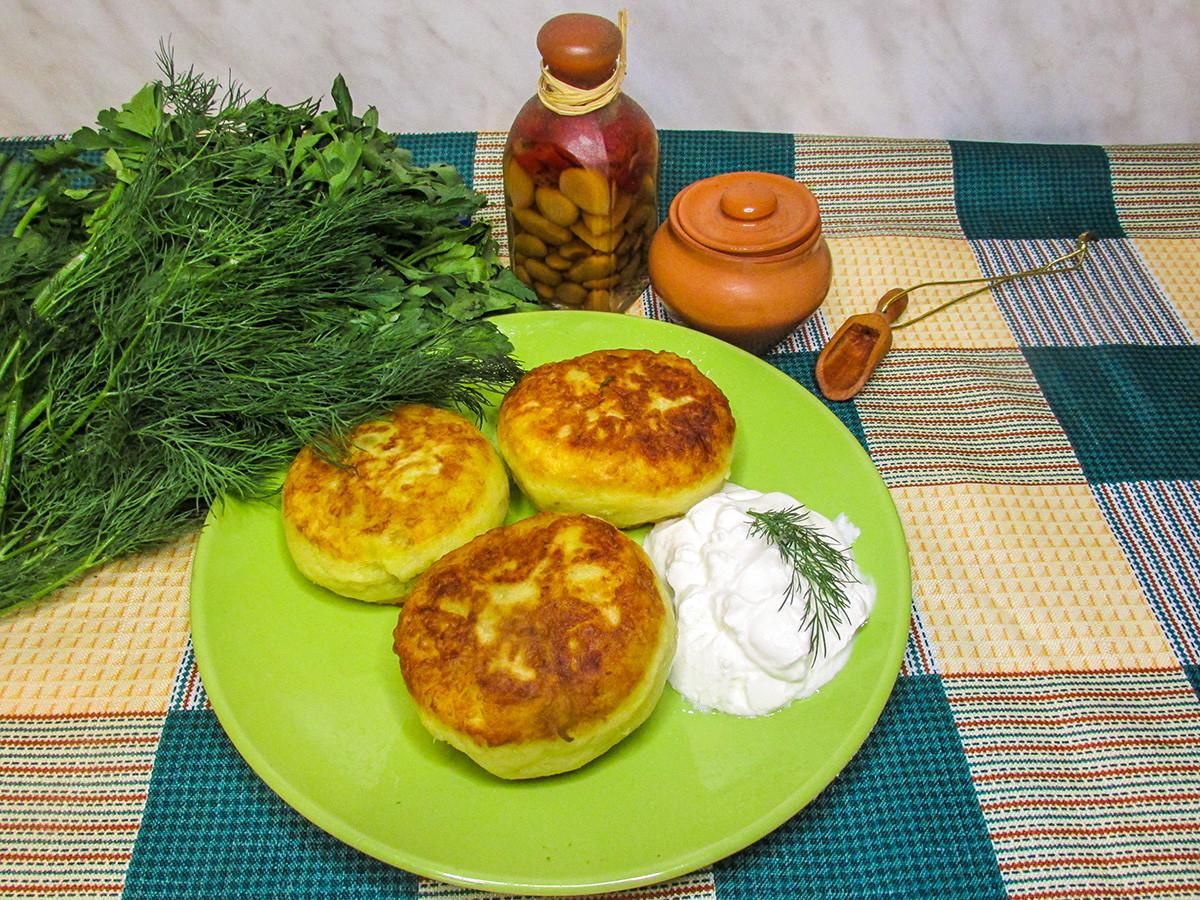 Moreover, cooking kolobok became especially popular among Russian housewives, as children, known for their tendency to be ‘poor eaters’, were excited about eating kolobok. So, mothers’ enthusiasm to have their kids eat well and wholesome was off-the-charts.

That’s how the new dish “potato kolobok” appeared. At first glance, it looks as if it’s a round donut and it also tastes like that. However, in reality ‘the round bun’ is made of potatoes with the secret ingredient inside – minced-meat or fish – cooked in a frying pan with a huge amount of oil. That sounds way too fatty, but you can eliminate the excessive oil by wiping each kolobok with a dry napkin.

Personally, I rediscovered this recipe after looking through my grandma’s hand-made recipe book. It was noted as ‘worth cooking’ and I gave it a try. It turned out to be so soft, squishy, and absolutely delicious, that I felt a sudden burst of energy to run and cook more for the whole family to enjoy. 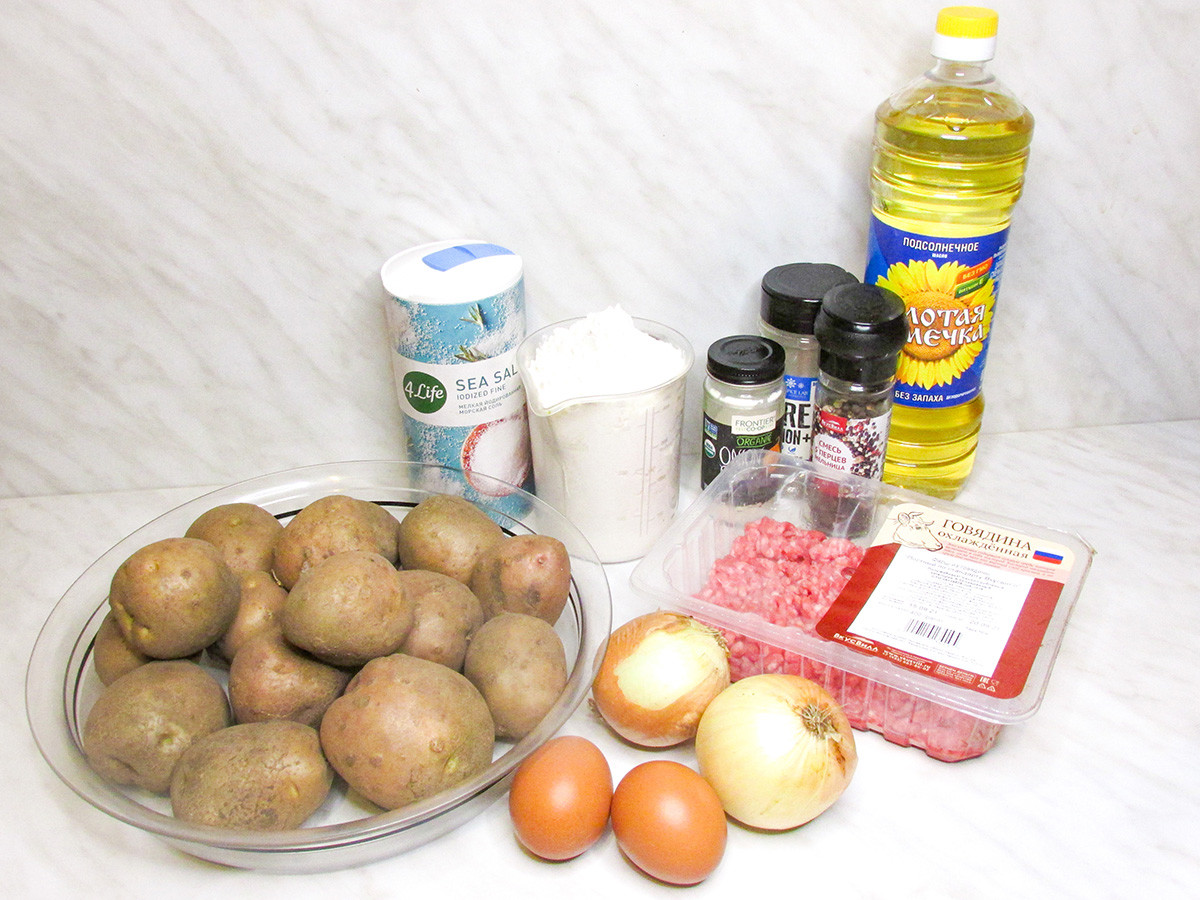 1. Fill the potatoes in a pot with water and turn on the heat. Let it boil with the skin on in order to retain the nutrients. 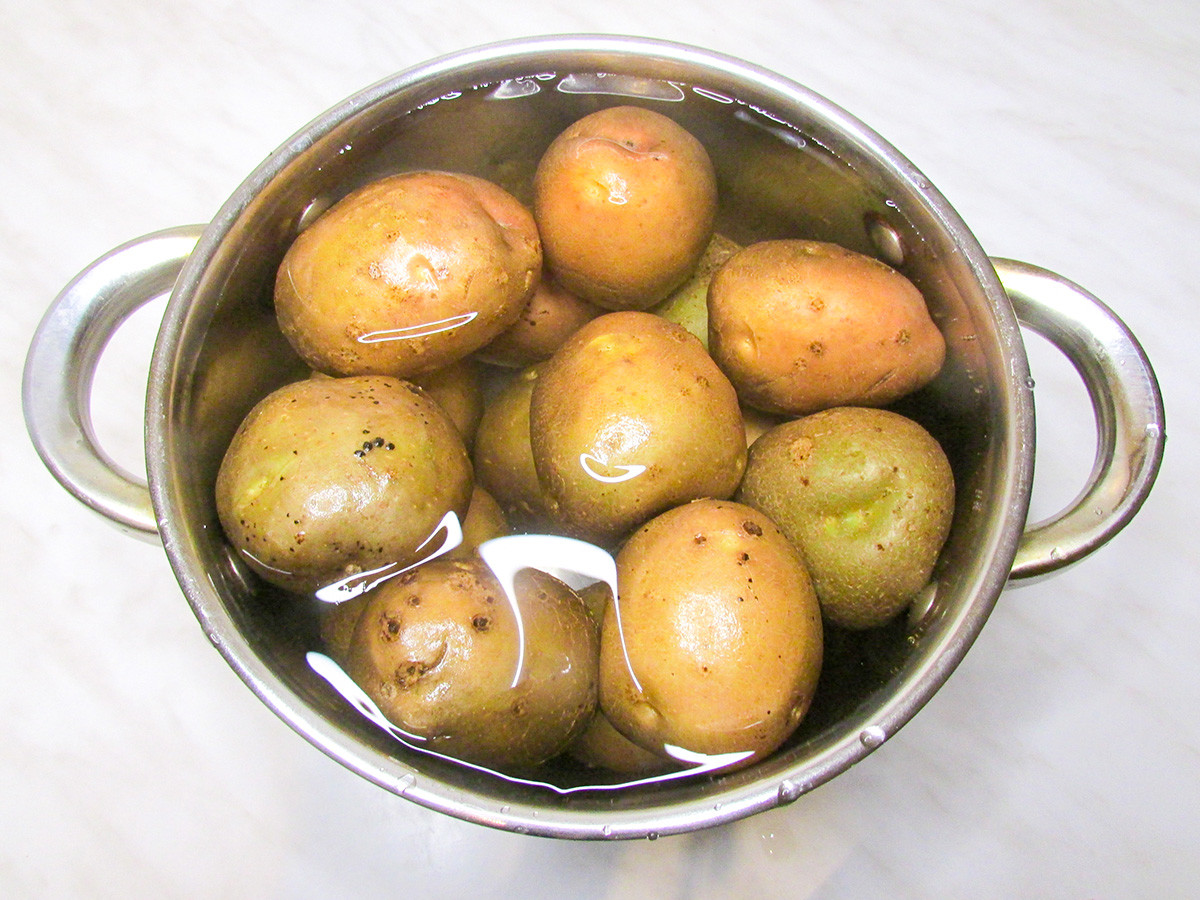 2. To prepare the meat filling, peel and cut the onions into small cubes. 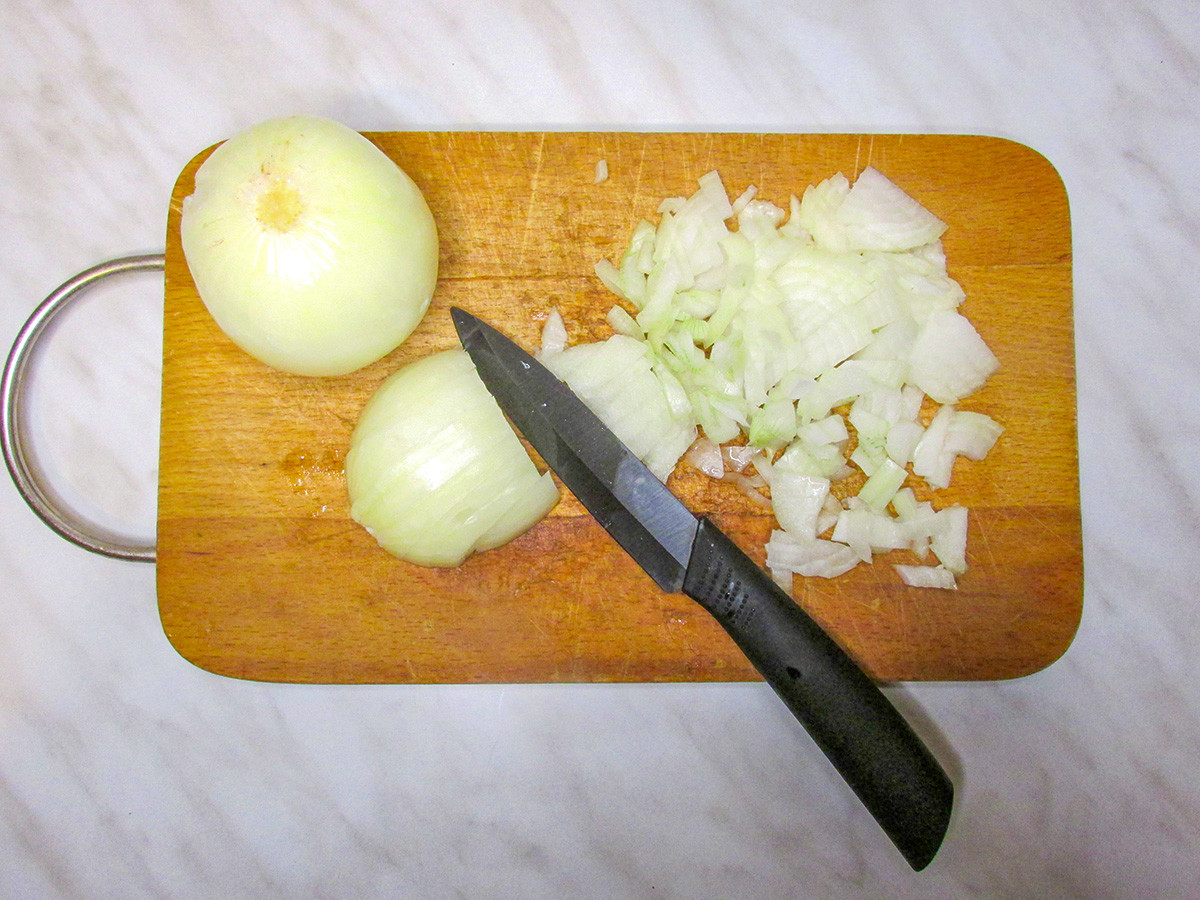 3. Fry the onions in vegetable oil on a frying pan until ready and soft. 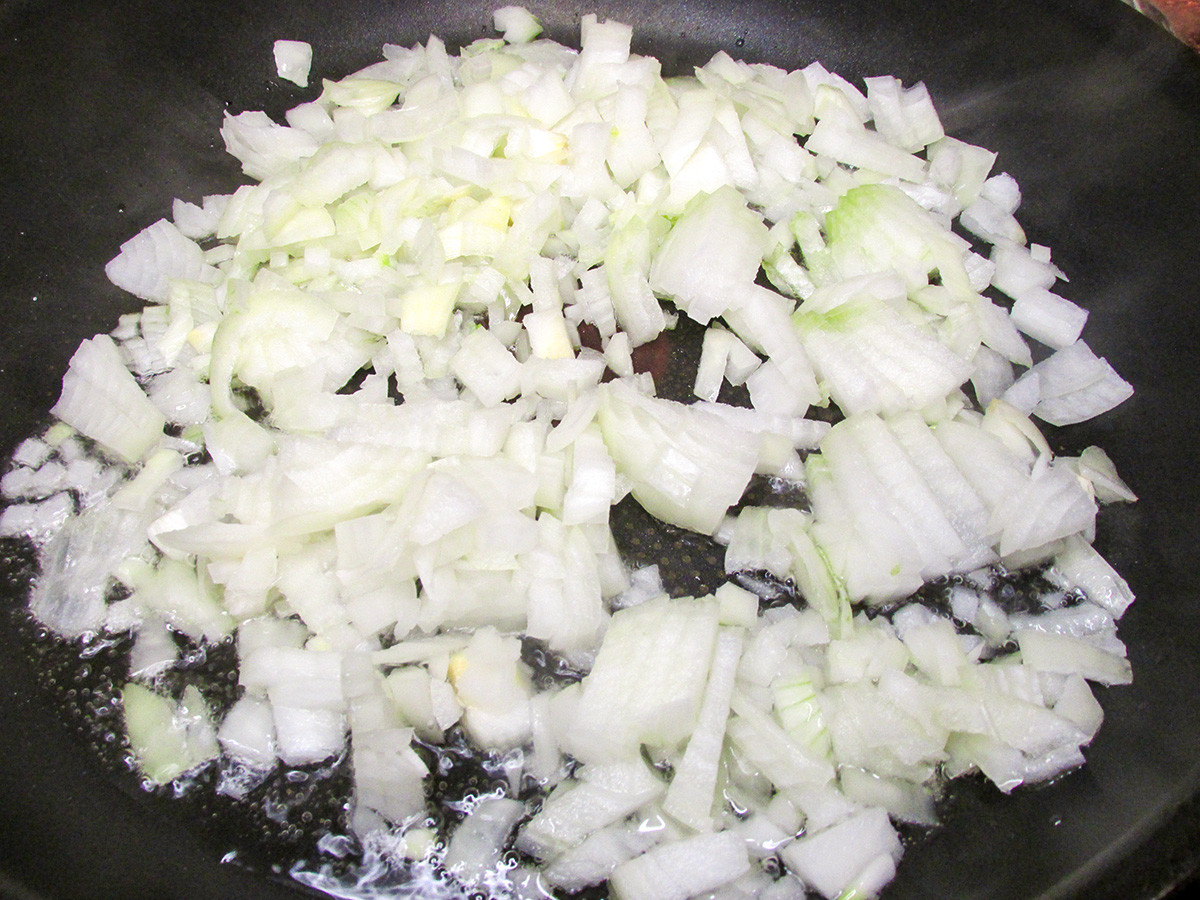 4. When the onion is fried, add the minced-meat; after that mix the ingredients well. Add a glass of water and simmer the meat, stirring from time to time, adding salt and pepper to taste. The meat filling is ready when the liquid has completely evaporated. 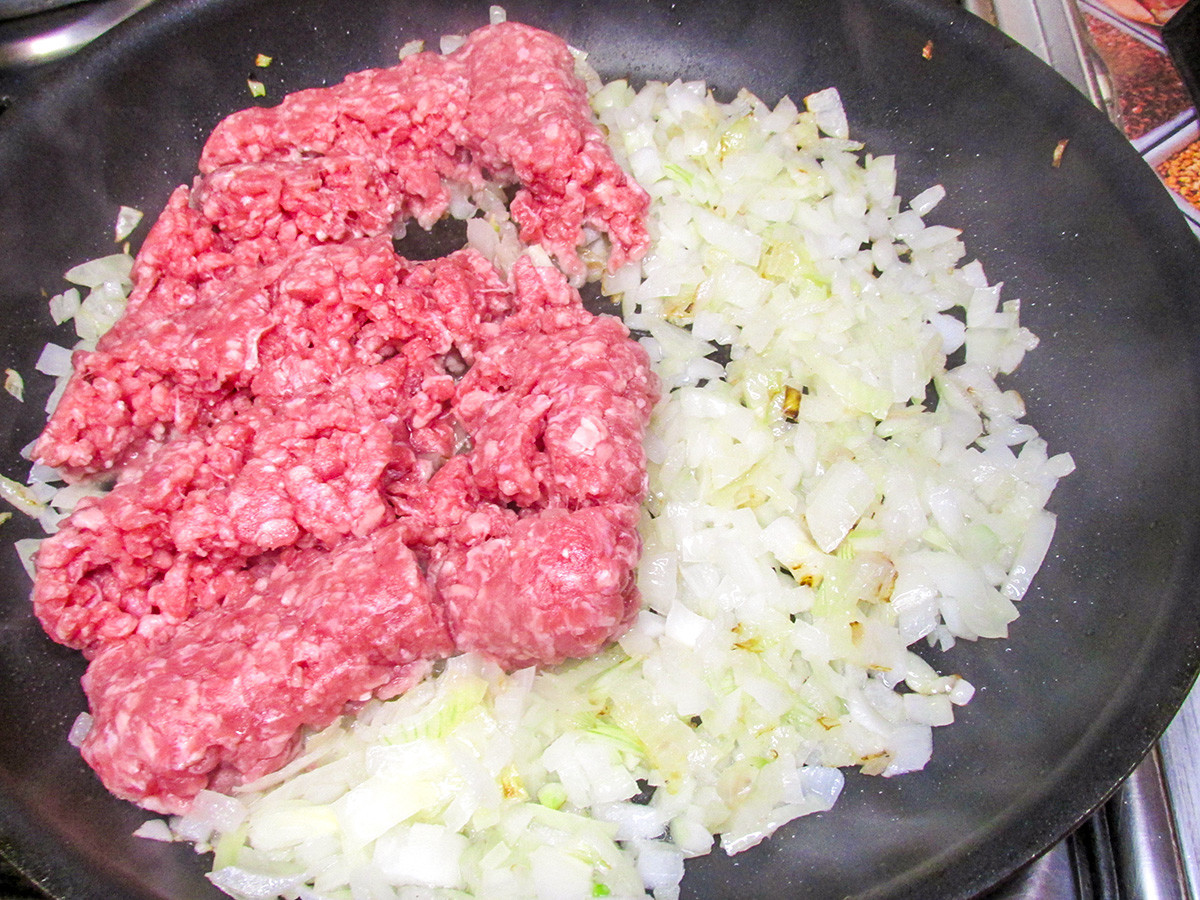 5. Peel the potatoes and grate on a coarse grater. 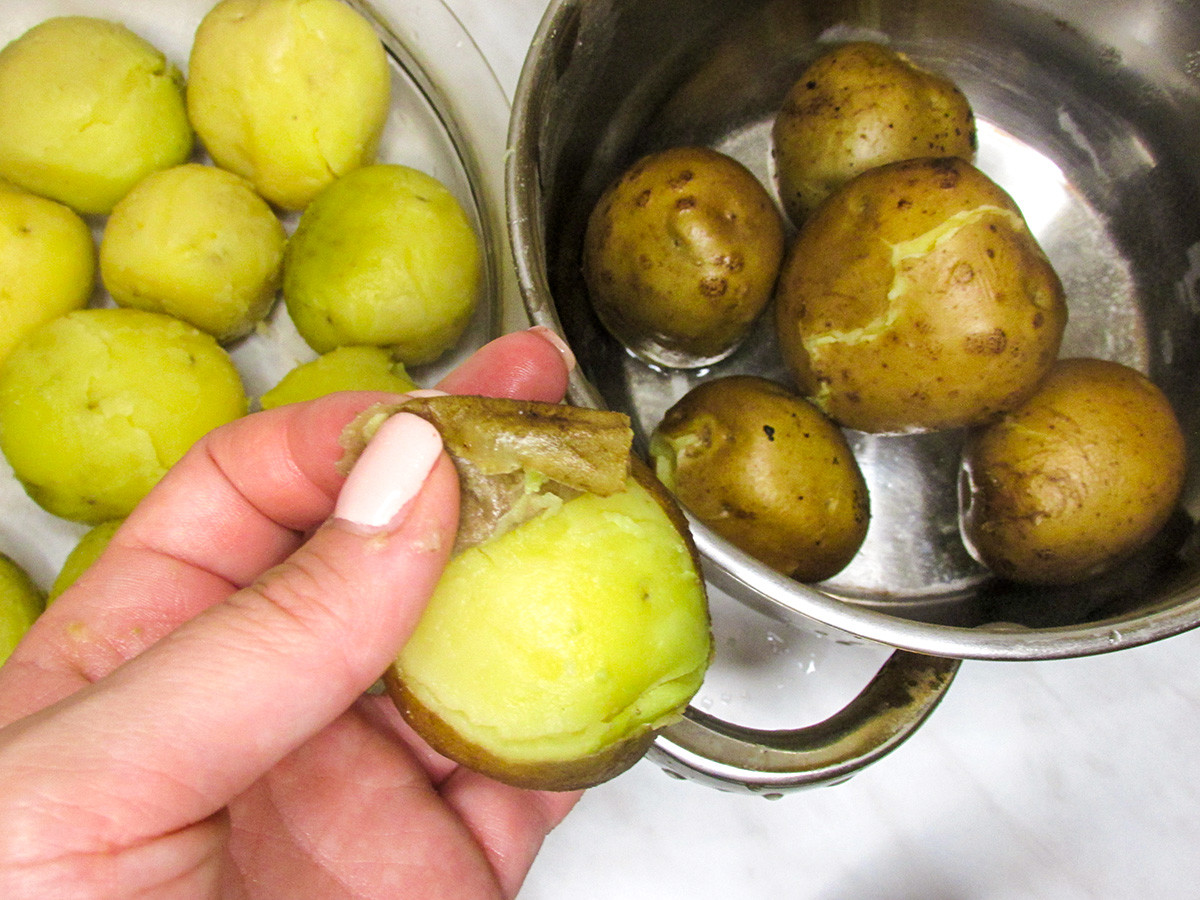 6. Add 2 eggs to the potatoes, 5-6 tablespoons of flour, a teaspoon or less of salt, and black pepper to taste. 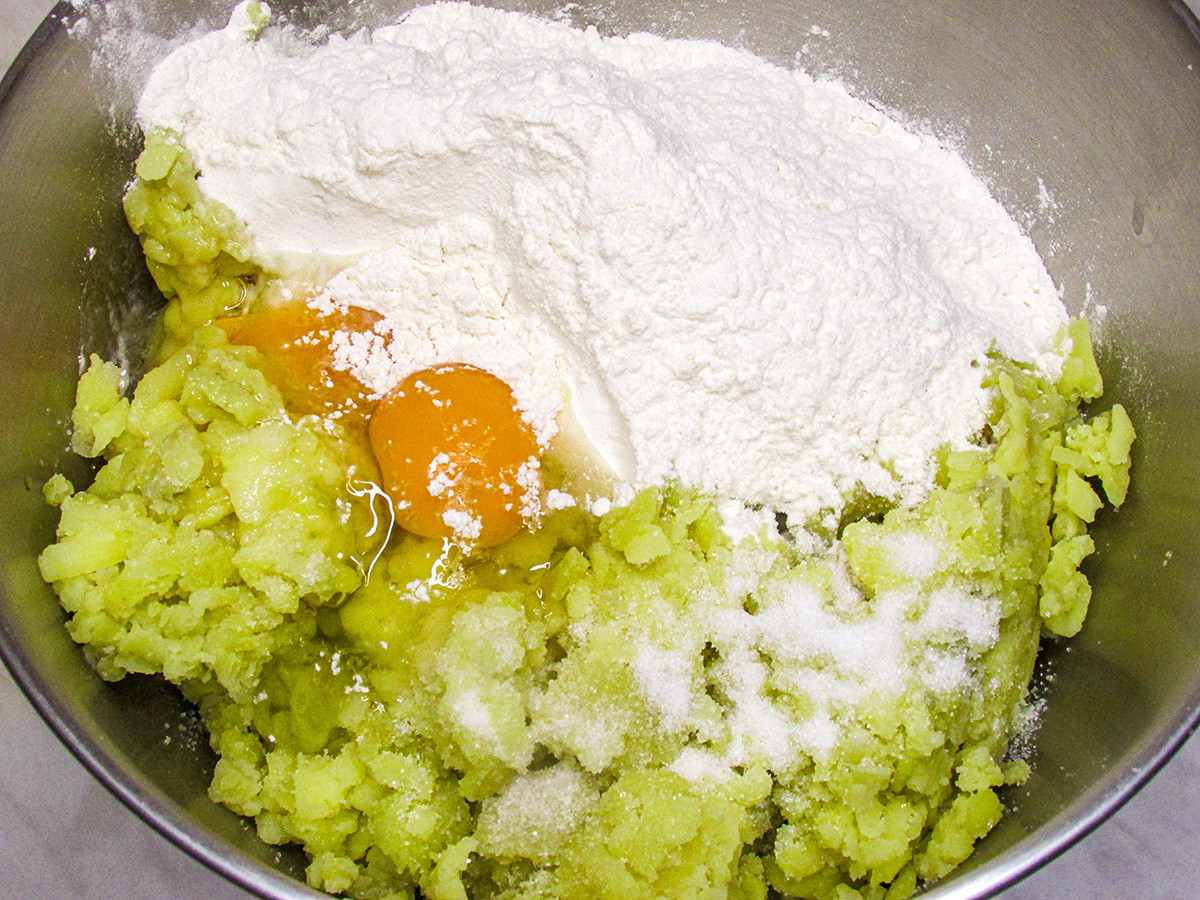 7. Knead the dough with the ingredients obtained. Divide the dough into several pieces (I had 16 balls). Roll a ball from each and flatten. Place the meat filling in the middle of the flat piece of dough. Pinch the edges and form a round bun. 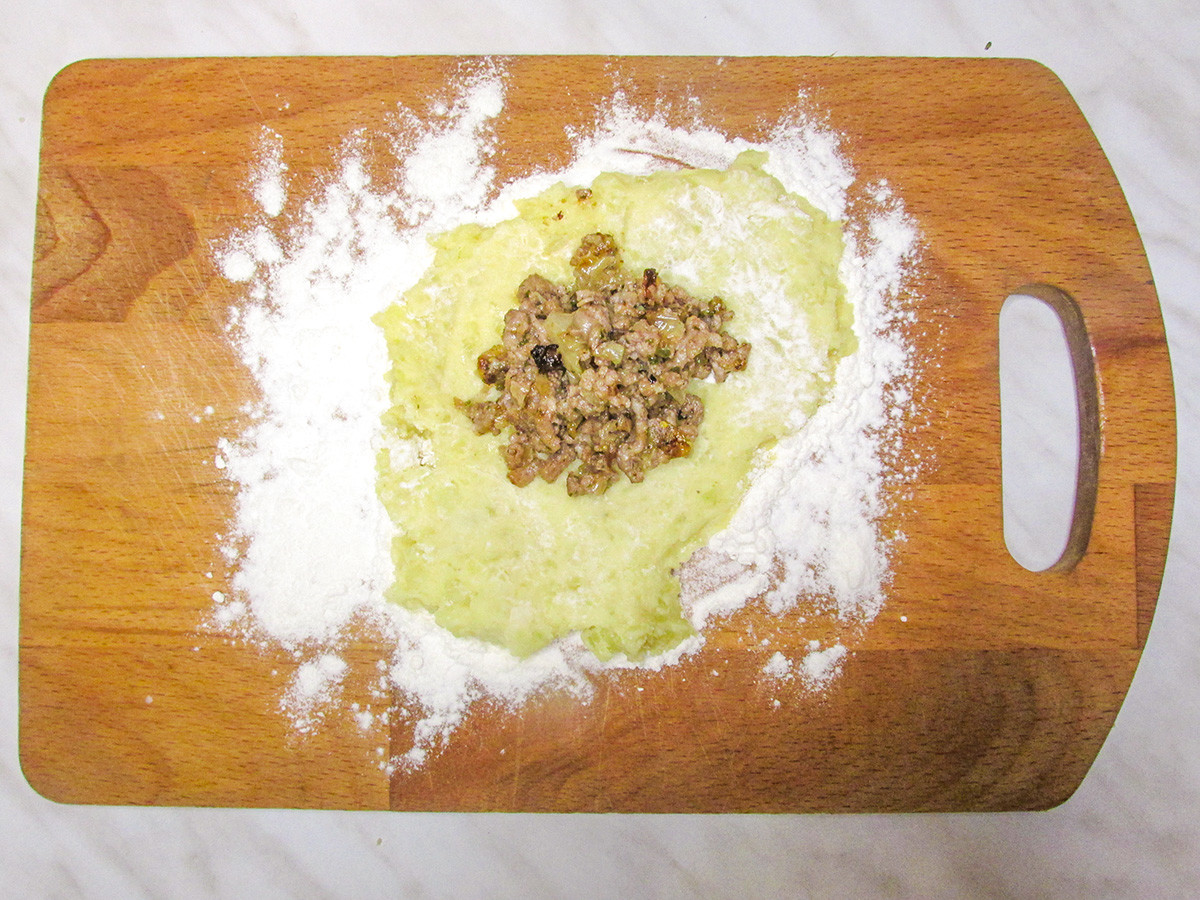 8. Fry the balls on both sides. Koloboks can be boiled like dumplings or cooked in the oven, but it seems this dish tastes better when fried. 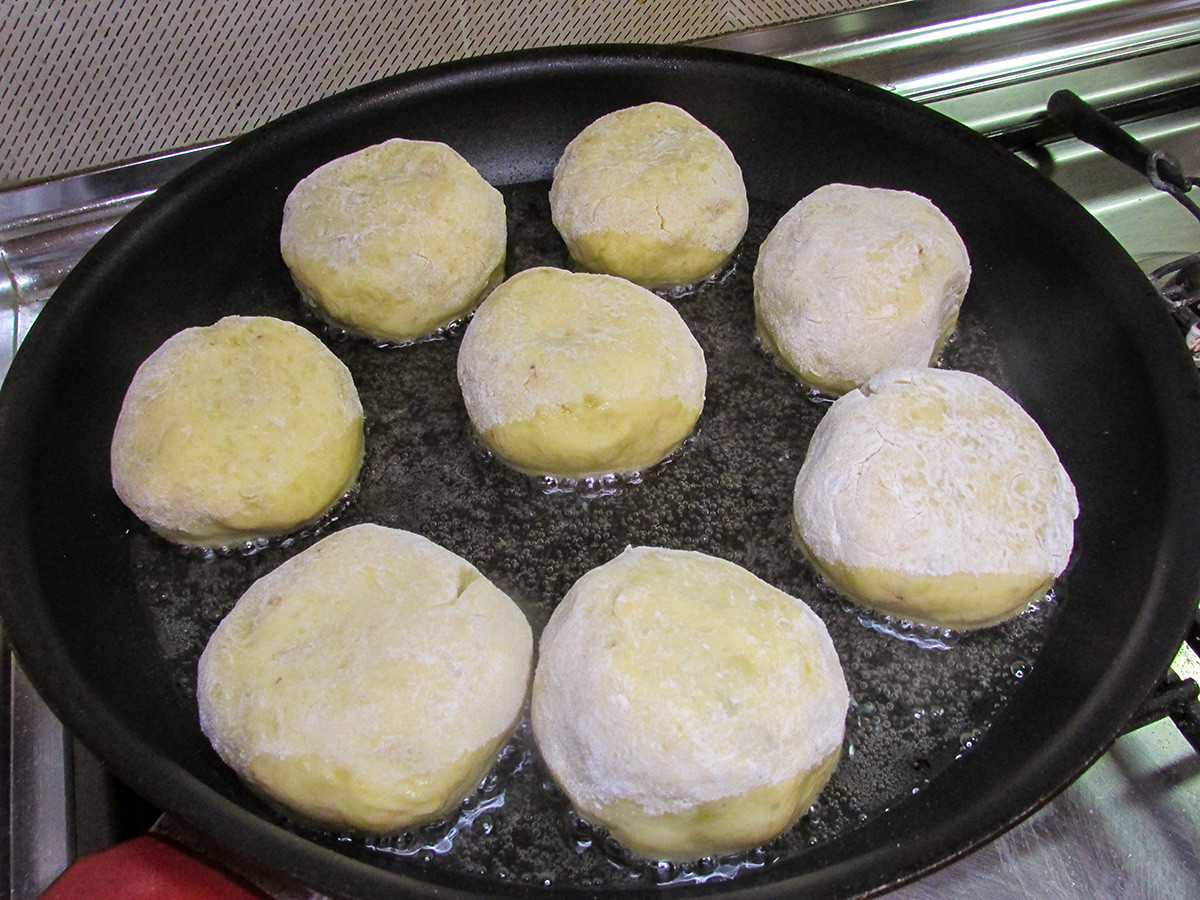 9. Serve with a few tablespoons of sour cream. 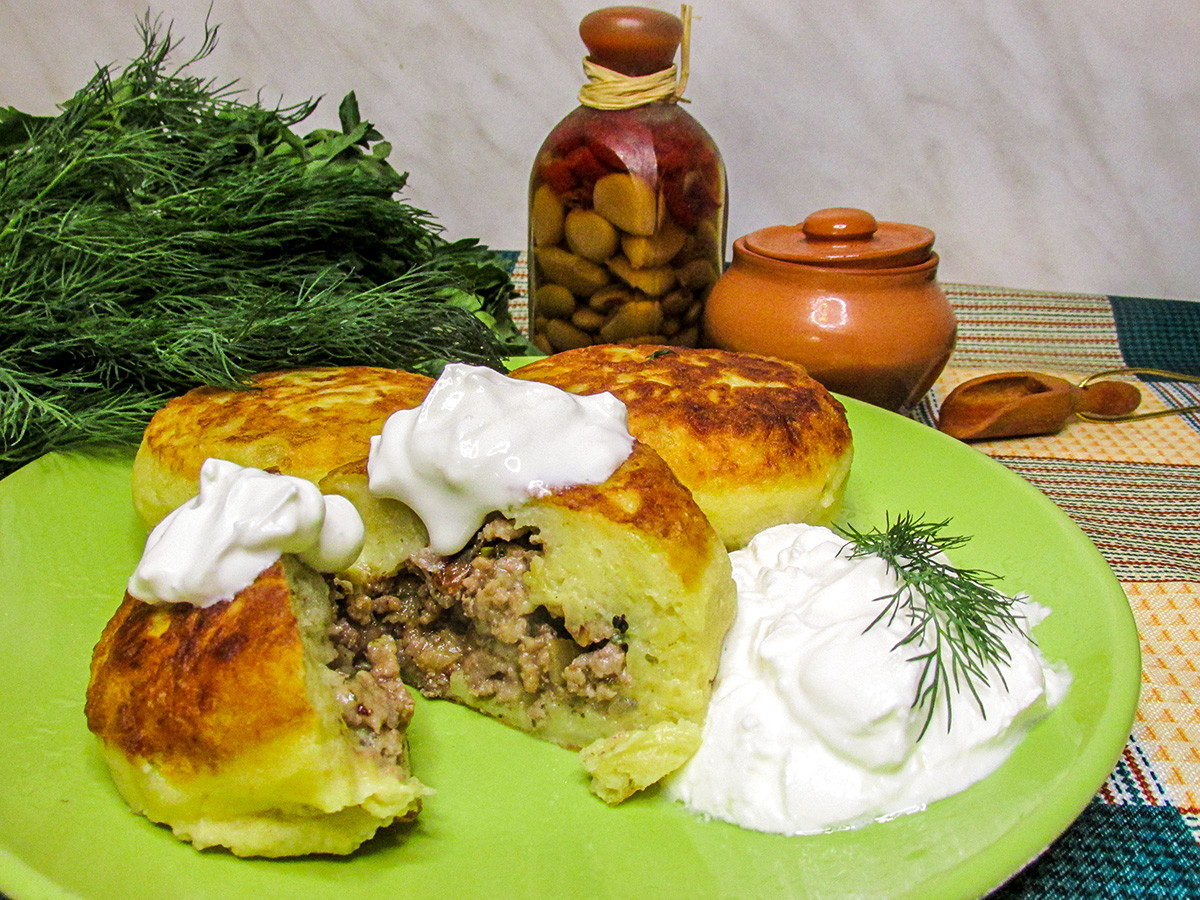