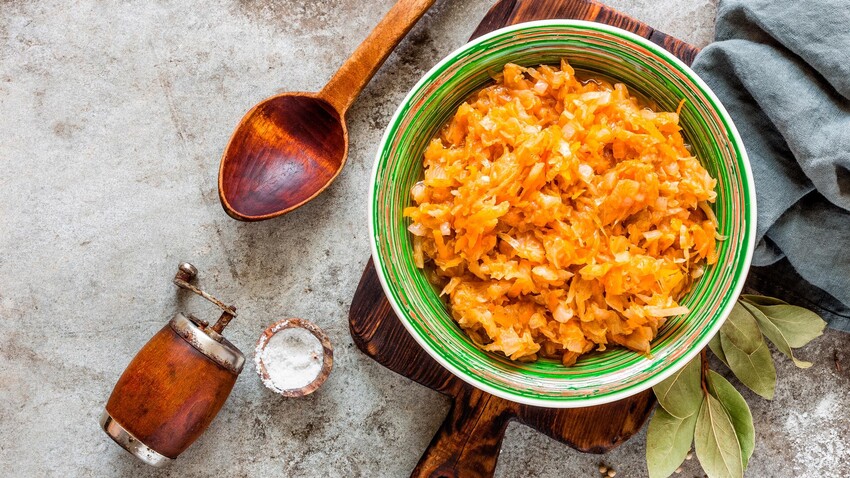 Many dishes of Volga German cuisine are based on sauerkraut.

Legion Media
Traditional donuts made from kefir dough, buns with sour cream and a pie sprinkled with sugar and butter. German folks brought these simple recipes to Russia 250 years ago and still use them today.

Not so long ago, Volga Germans were one of the largest Russian folks. They came to the banks of the Volga River at the invitation of Empress Catherine II in the mid-18th century from different German lands and founded many settlements in deserted places, which now are located in the Saratov and Volgograd regions (read more about the life of modern Germans in Russia here and here)

They brought with them a lot of recipes for simple and, at the same time, hearty dishes, many of which are still cooked at home to this day.

Donuts that are prepared in Germany are different from donuts made by Russian Germans. In German, they are called ‘Kräppel’, but, in Russia, locals call them ‘krepli’, ‘krebli’, ‘krebel’, depending on the settlement.

“Krepli are the donuts with a rhombus-like cutout in the middle made of fluffy dough, they are baked in any village,” says Anastasia Kleinfelder from Engels, Saratov Region. “My grandmother always made basins with them, I remember it from childhood.”

The secret of the donut is that you don't need yeast for the dough, only Russian fermented kefir dairy drink.

Mix all the ingredients, leave the dough to rest for an hour and then cut into rectangles “turning out” through an incision in the middle and fry in sunflower oil. Soak the donuts with a paper napkin to get rid of excess fat and sprinkle with powdered sugar on top. 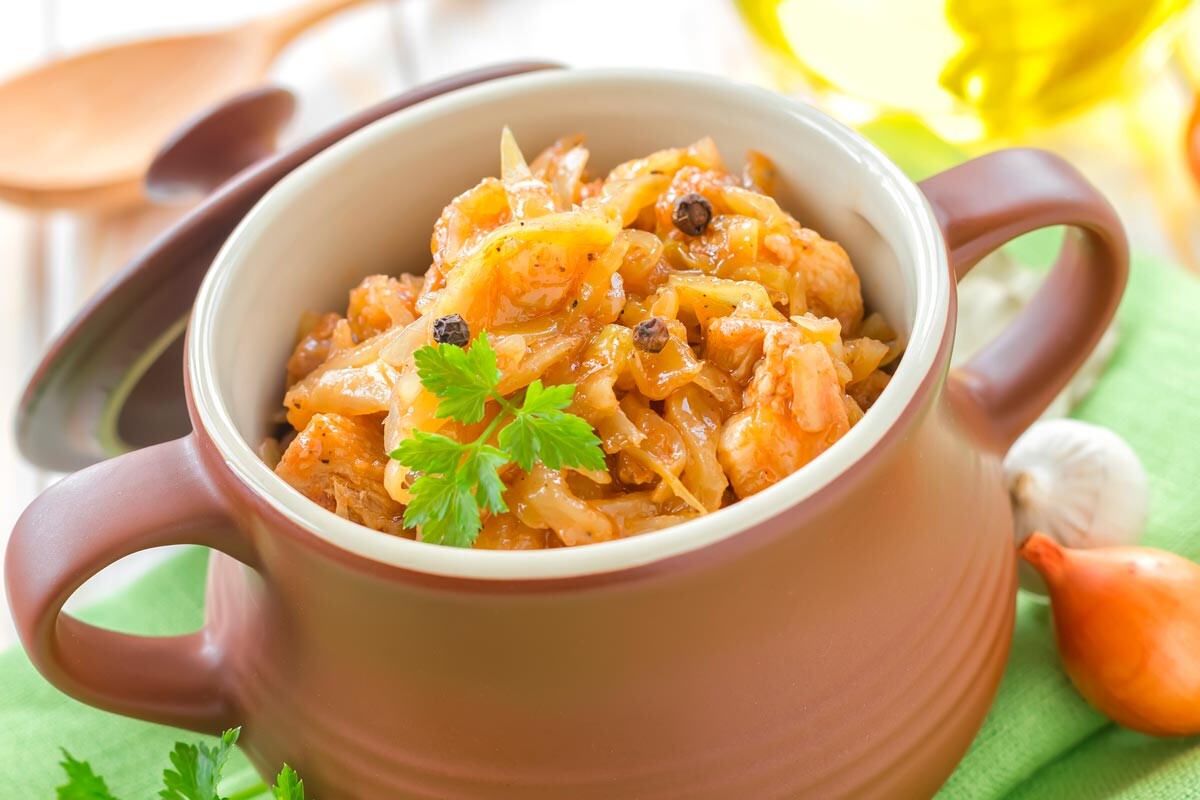 The combination of stewed cabbage with steamed dumplings is still very popular among Russian Germans. Dumplings can be called in different ways: ‘Klaus’, ‘Knepfel’, ‘Klump’, ‘Dampfnudeln’.

First, pour yeast in 50 ml of warm sweetened water and leave for 5 minutes. Then add milk, egg, salt, butter and flour. Leave it in a warm place so that it rises (two times). Then roll out, grease with oil, make a roll and cut into 2 cm-pieces. Cover with a towel and leave to rest.

Take the cabbage (sour or fresh), fry it with the sliced onion for about five minutes, then move to a deep saucepan (not enameled), add dumplings on top and add a little water. Simmer for 40 minutes without opening the lid. Some Russian Germans first stew the cabbage with pork and add mashed potatoes.

The main pie of the Volga Germans’ cuisine, which is prepared in almost every family. Some call it ‘Streusel Kuchen’, others - ‘Zuсkerkuchen’ or ‘Riwell Kuch’. This is a pie sprinkled with flour mixed with sugar and butter. Some families add jam or berries, which is also very tasty.

Make the yeast dough, grease it with oil and leave in a warm place for 1-2 hours. Then spread on a baking sheet and add the filling on top. The third layer is streusel. Bake the pie in a 180°C-preheated oven for 30-40 minutes. Then cut into pieces and serve. 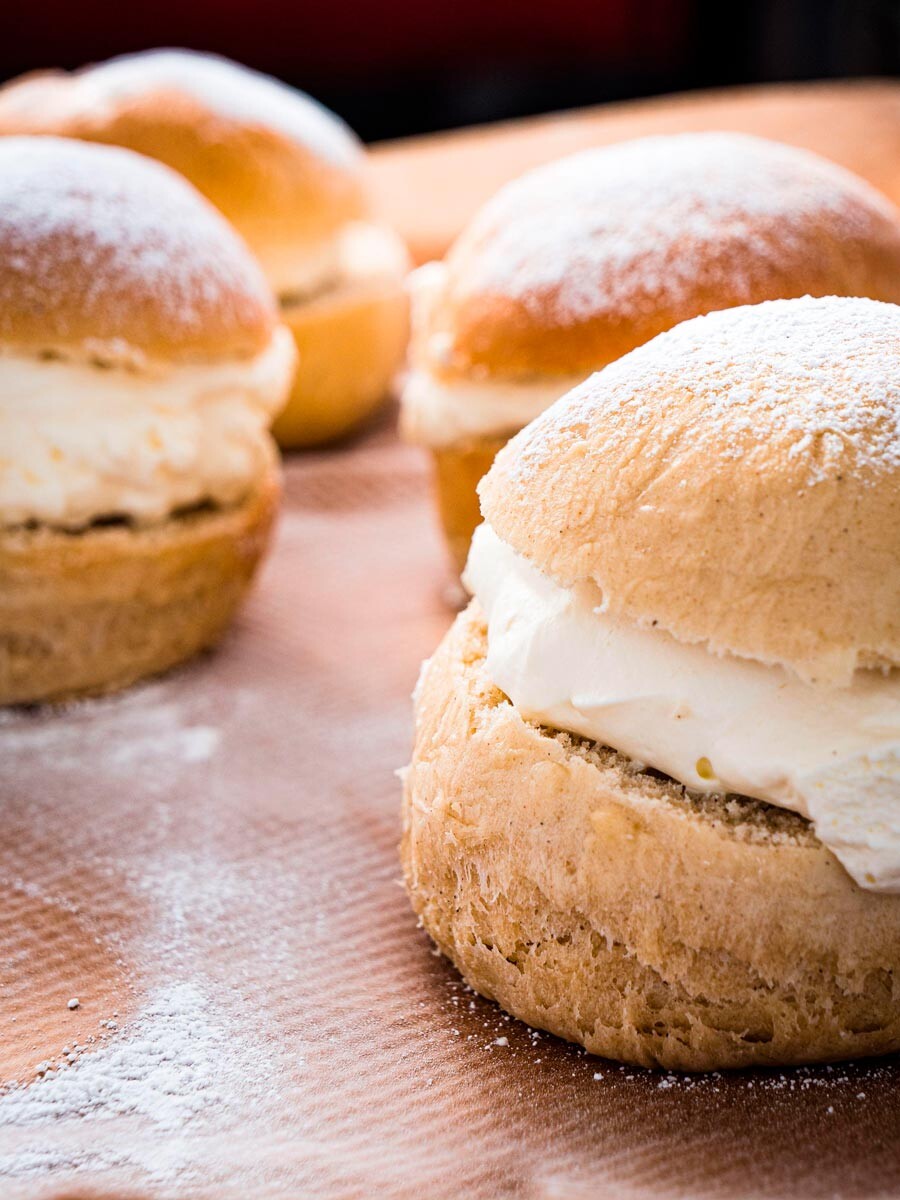 Making these buns is much easier than reading their name! In fact, it’s just pastry from yeast dough with a sour cream whipped with sugar filling.

Make yeast dough, leaving it to come up 3 times. Roll out into balls, leave for another 30 minutes and then bake for 20 minutes at a temperature of 180°C. When they cool, cut off the top and add the sour cream whipped with sugar. 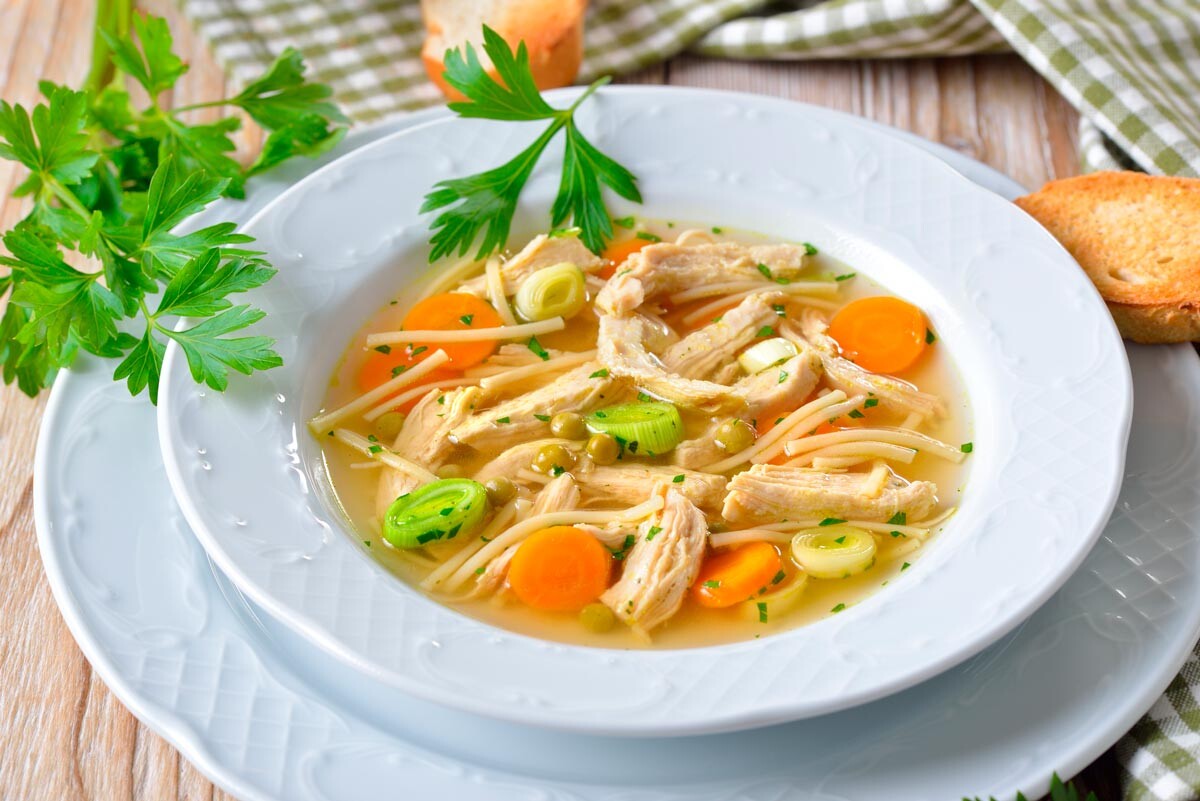 This is a very popular version of soup on chicken or vegetable broth, which can be made with or without meat. The main ingredient is handmade noodles.

Preparing the noodles: put flour in a deep bowl, add egg and a little water there. Make the dough, roll it into a 1 mm layer, roll it into a tube and slice thinly. Then let the noodles boil with the broth for 3-4 minutes and when it pops up to the surface, add the fried grated carrots with onions. You can also add other vegetables and sliced chicken. Serve with fresh herbs (yes, and with DILL). 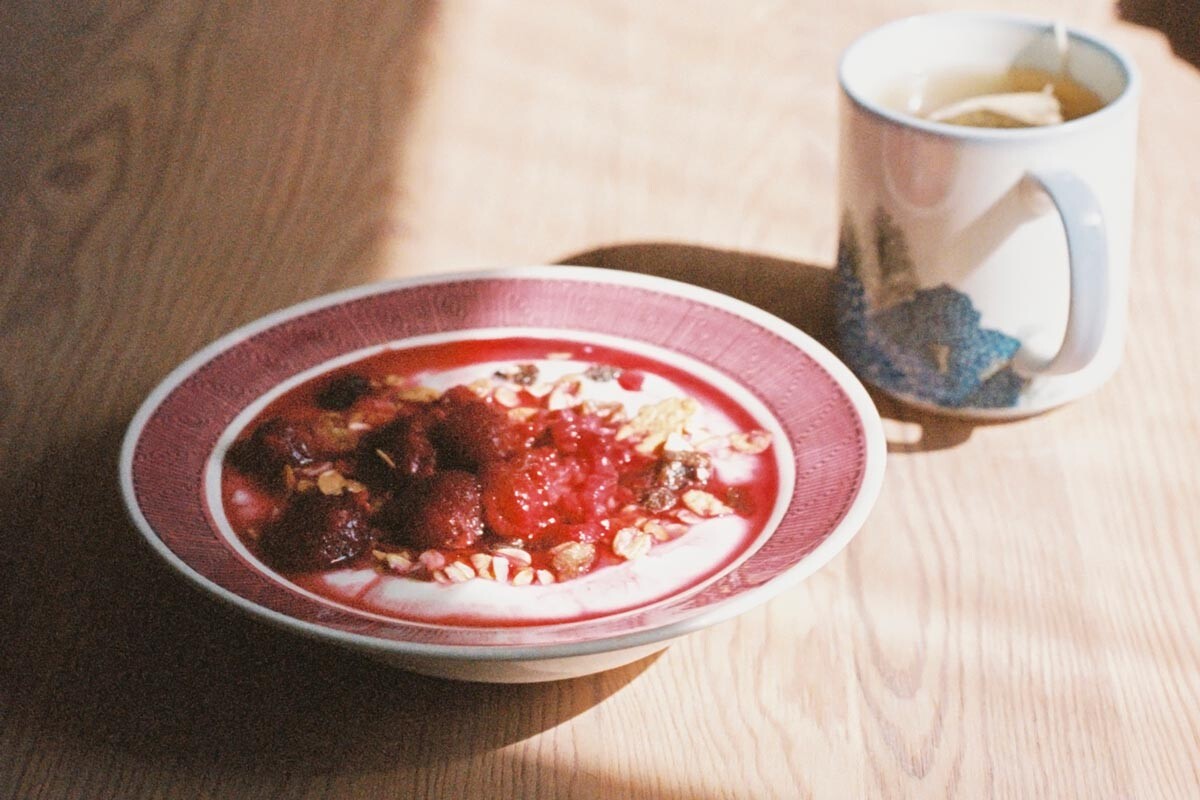 This dried fruit soup is a little-known dish in Europe. Modern Russian Germans treat it rather controversially, like foreigners treat okroshka. This recipe appeared, most likely, when the Germans first moved to Russia. There were a lot of fruit trees on the Volga and the fruits were dried for the winter and, most likely, the dessert arose from this.

Take a handful of different dried fruits (eg. raisins, dried apricots, apples, pears, prunes), pour boiling water. Then put them in a saucepan, pour water, add 2 tbsp of sugar and cook for 20 minutes. Put a pinch of salt and pour about 3 cups of milk into a saucepan. Add 1.5 tbsp of flour to another 1 cup and also add it to the pan. When the milk boils, turn off the heat. Let it cool down a little and add 400 grams of sour cream.

Vareniki dumplings is a very popular dish among the Slavs, who most often cook them with sweet cottage cheese. But the Volga Germans cook dumplings with tvorog and green onions and they are not sweet at all. In Southern German cuisine, there is a similar dish called ‘Maultaschen’ (literally “mouth pockets”): they are dumplings with cheese and spinach.

“Germans like to make square-shaped dumplings, most likely because it’s convenient and fast. At least, I haven’t seen such a modeling of dumplings among other peoples,” says Anna, who was born in a family of Russian Germans.

Make the dough from pumpkin puree, water, eggs, flour, salt. For the filling, mix cottage cheese with chopped onion. If the tvorog is dry, add a spoon of smetana. Roll out the dough, cut into squares, put the filling and stick it “crosswise”. Then cook in boiling water for 5 minutes.