Rooster Ukha: How to cook a Russian fish soup with chicken broth (RECIPE) 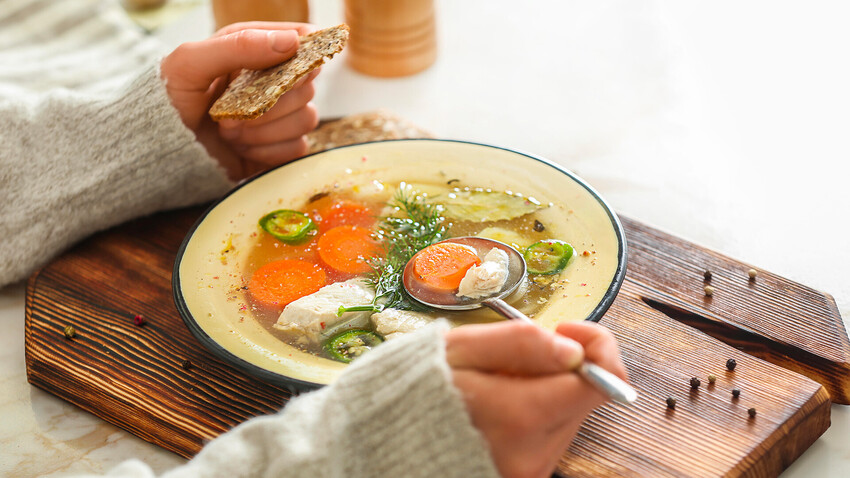 There are more legends about this unusual soup than about any other in Russian cuisine.

Legion Media
According to legend, neither tsars nor monks could resist this enticing soup. True or not, the soup itself is nutritious and delicious.

In the mind of a modern Russian, ukha is a soup made of fresh fish. However, it wasn’t always like that. In the 16th century, ukha was generally called any soup: vegetable, meat, fish, cereal, and even what we now call compote (dried fruit drink).

“Rooster Ukha” is a fish soup based on chicken broth. The first mention of soups that mixed both meat and fish broth was found in the Domostroy (a 16th-century Russian set of household rules). There’s also a colloquialism with the same name, “Rooster Ukha”, which means a rather dubious matter, a combination of incompatible things, something illogical, ridiculous or strange that defies any explanation. In general, the dish has many names, the most famous of which are “Tsar Ukha”, “Don Ukha”, “Monastic Ukha”, and “Bishop Ukha”.

It’s believed that the Cossacks would fish on the Don River during the night, and in order not to go hungry before the first catch, they cooked chicken broth and ate some of the chicken. The broth remained, and then they used it to cook ‘triple ukha’ – first, they boiled small fish in cheesecloth; then the larger ones, and then the largest. Hence, the name “Don Ukha”.

Another legend is connected with the fact that when monks went fishing they took a rooster with them. Since the catch was not always plentiful or if there were few fish, they cooked a rooster in a pot, and then added the small fish that they had caught. In the end the rooster was discarded, and the meat was replaced with fish. Hence, the name “Monastic Ukha”.

There’s also a legend that once upon a time there was a woman who cooked ukha in chicken broth for a bishop who was fasting. The ukha was delicious and the chicken meat wasn’t even noticeable by taste, but the color betrayed the dishonest cook - the broth was yellow. The bishop, however, liked the recipe, forgave her for the trick, and kept the recipe to himself. Since then, it has been called “Bishop’s Ukha”, while any dubious version is called “Rooster Ukha”.

Ivan the Terrible seemed to love ukha as well, and one of the recipes for "Tsar's Ukha" calls for cooking sturgeon in chicken broth. That's why “Rooster Ukha” is also sometimes called "Tsar's Ukha".

Thus, the “Rooster Ukha” isn’t something mythical, but a very popular dish that has been around for several centuries. Today, we’ll try to cook it ourselves. 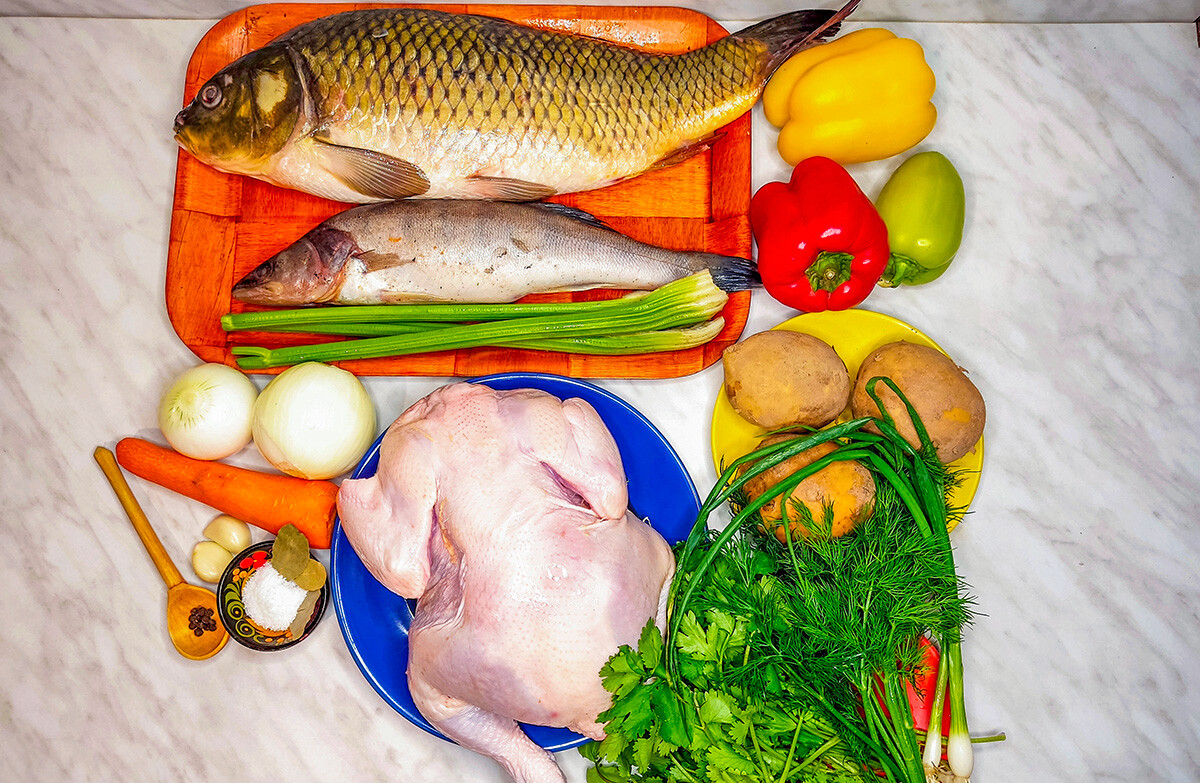 1. Cut the chicken into pieces. Choose about a quarter (any parts will do: thighs, breast, and wings); rinse well in running water. Fill the pot with cold water, about 4 liters. Bring to a boil on high heat, and remove the foam that appears. 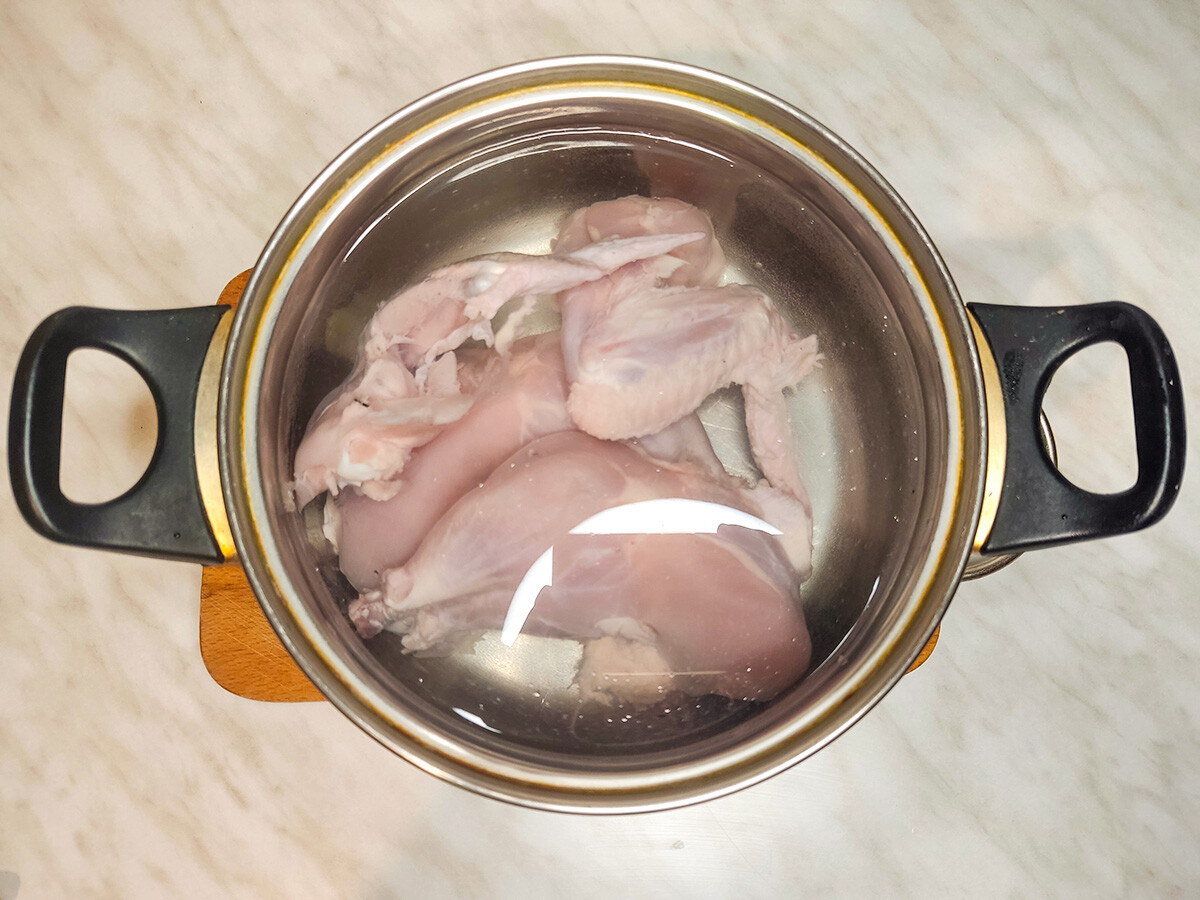 2. Cook the broth over low heat for 2 hours (without closing the lid). When it’s done, remove the pieces of chicken and separate the meat from the bones. Then cut the meat into pieces and put aside. 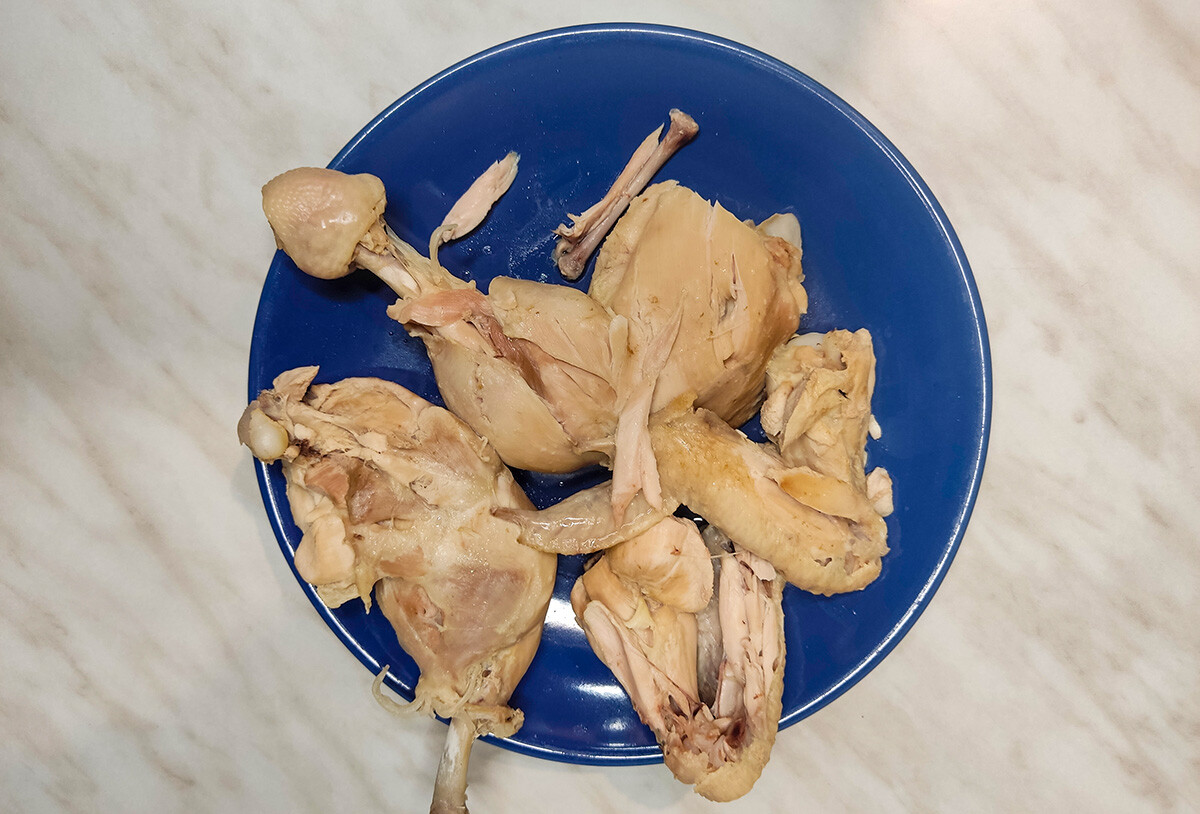 3. While the chicken is cooking, let's prepare the fish. You can use any fish, but it’s most delicious to combine several types. This time let’s take fresh pike perch and carp, which are usually always fresh and available at the market. Clean, gut and cut both fish into large pieces. 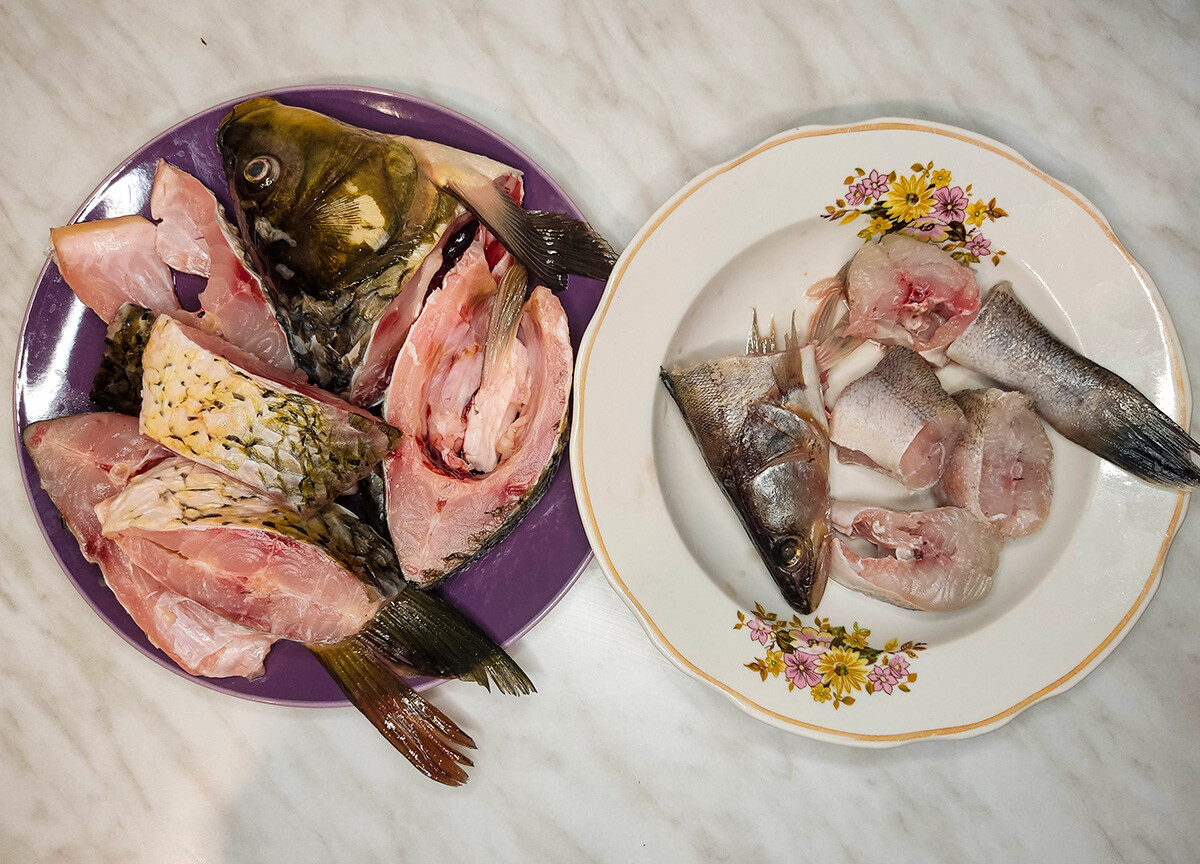 4. Then put the fish in the broth. Cook over low heat for 20 minutes so that the pulp begins to fall off the bone. After that put the fish on a separate plate and set aside. 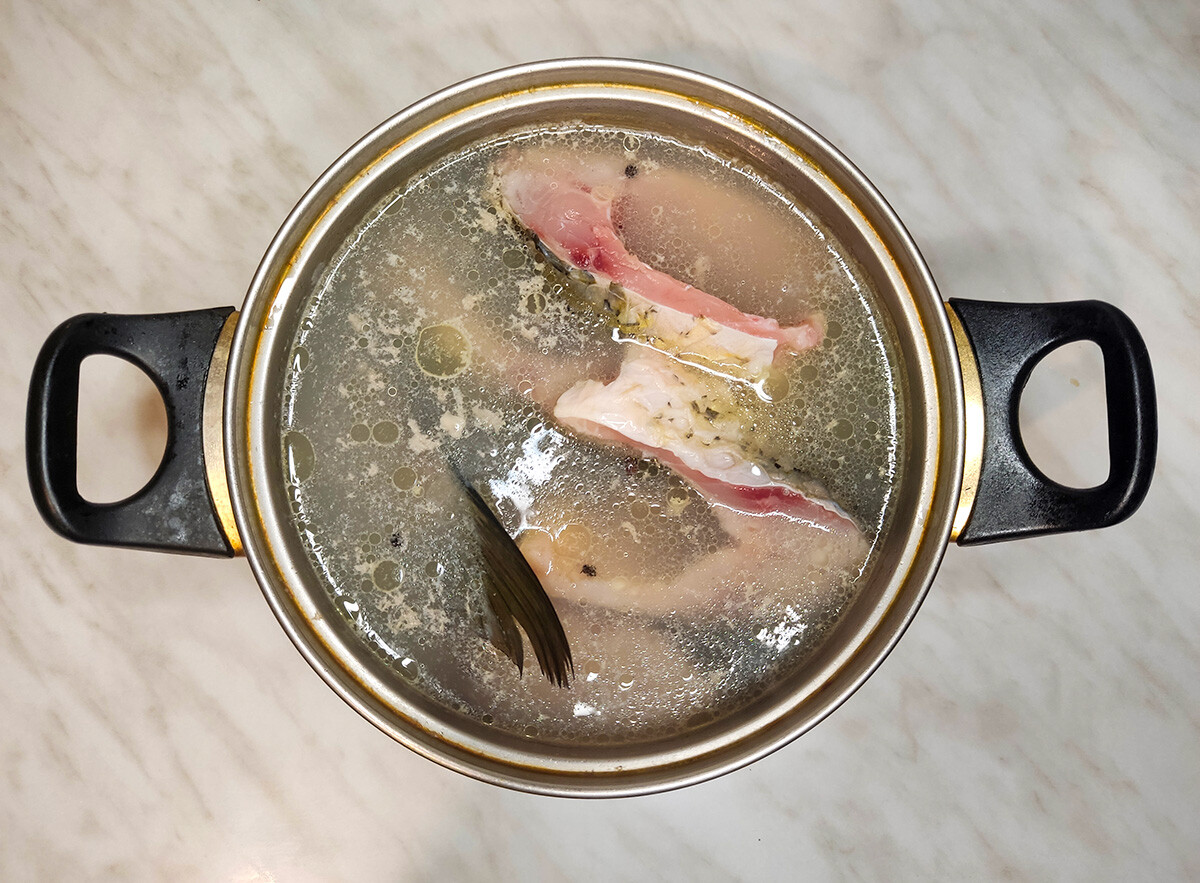 5. Now, it's time to cook the vegetables. Peel the potatoes, cut into large pieces. Add to ukha. 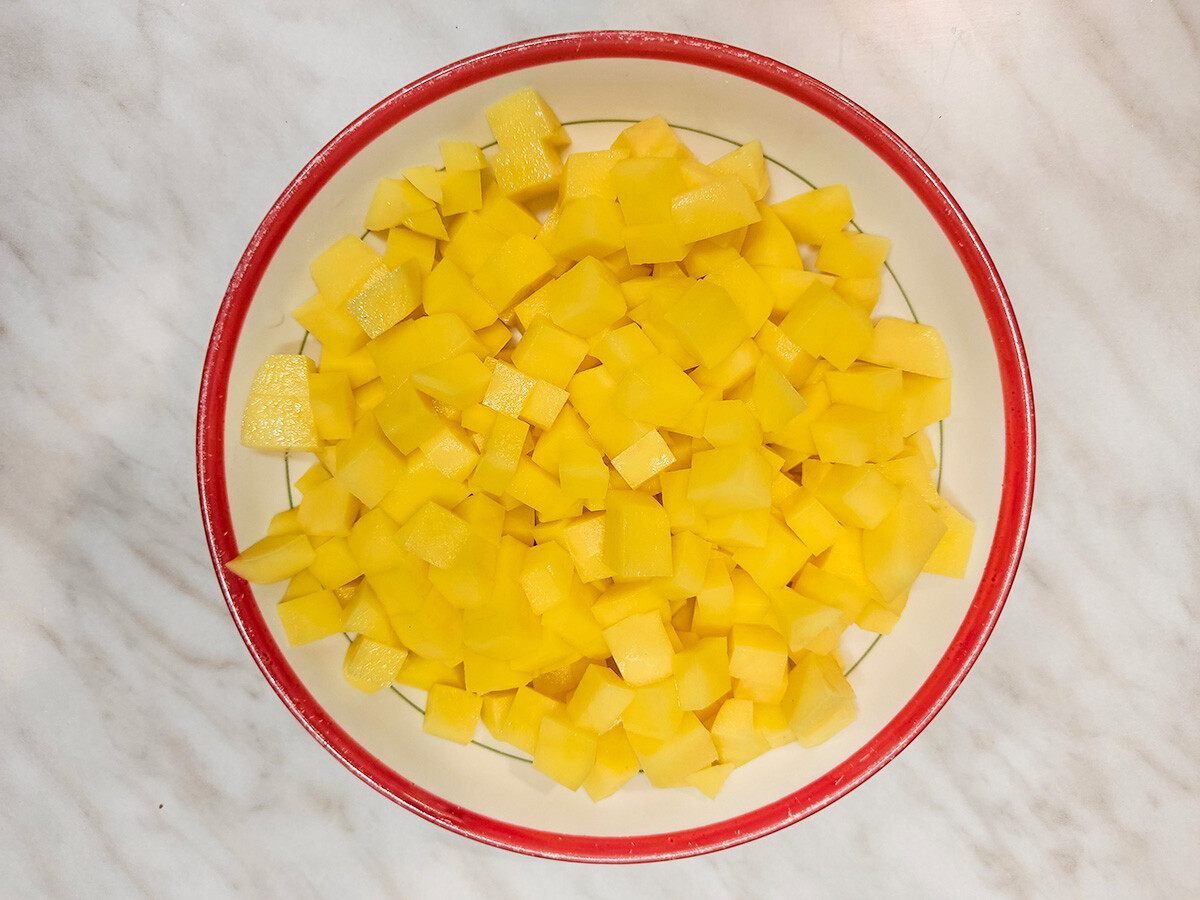 6. Cook the vegetables in double broth over low heat until the potatoes are ready; that will take about 15-20 minutes. Meanwhile, finely chop the carrots and onions, and add to the soup. 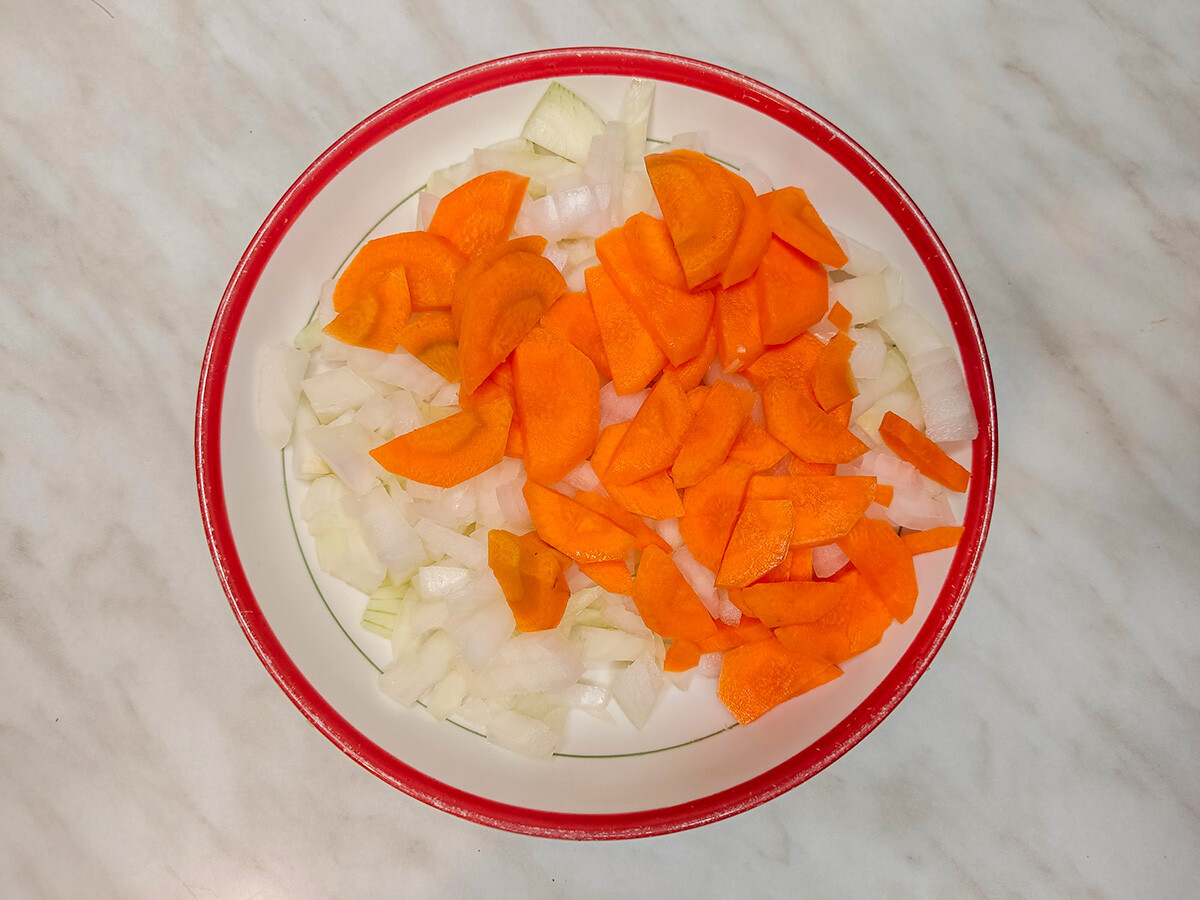 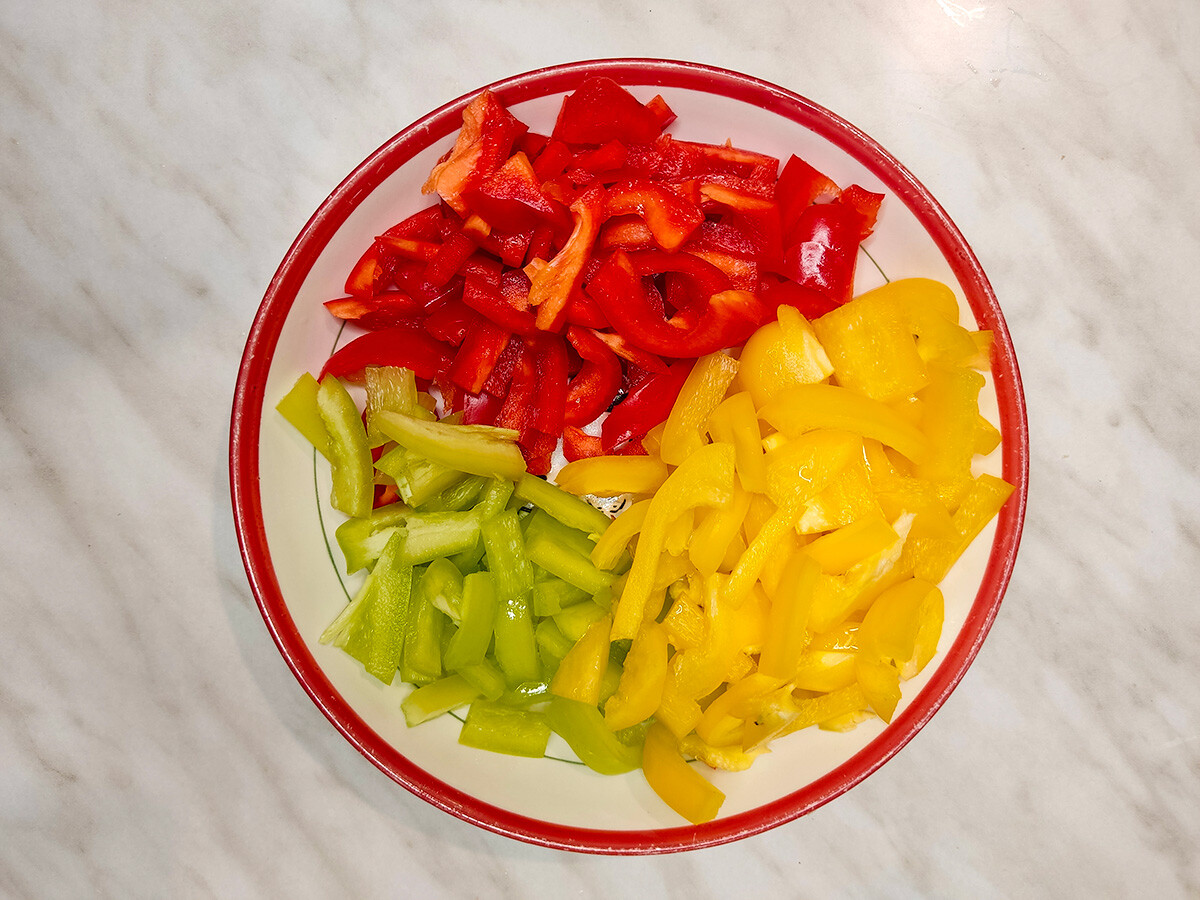 8. When the potatoes are ready, put the pieces of poultry and fish back into the saucepan. Add spices: bay leaf, black pepper, and salt. And immediately - add the colorful sweet peppers. Then cook for a couple of minutes. The final step - put finely chopped celery, herbs and garlic cloves into a saucepan. Remove your soup from the stove, cover with a lid and let it steam for about half an hour. Our “Rooster Ukha” is ready! 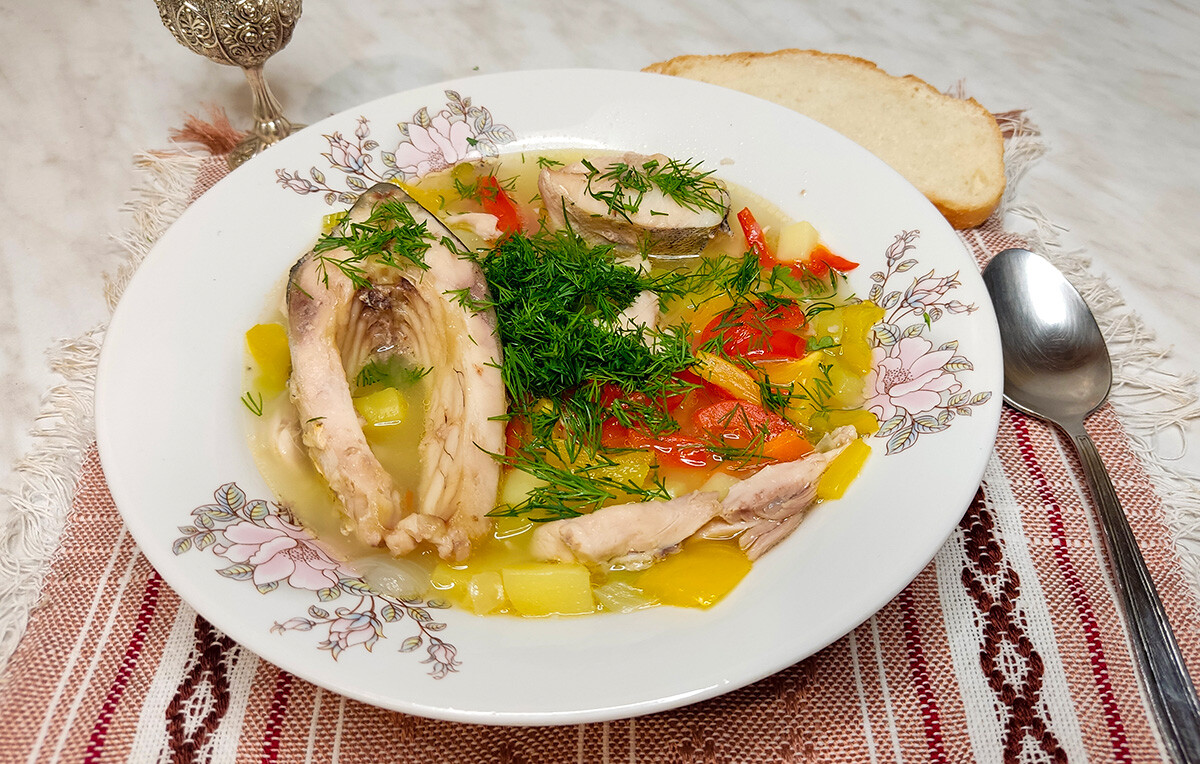