Why did the Soviet Union test nukes underground? 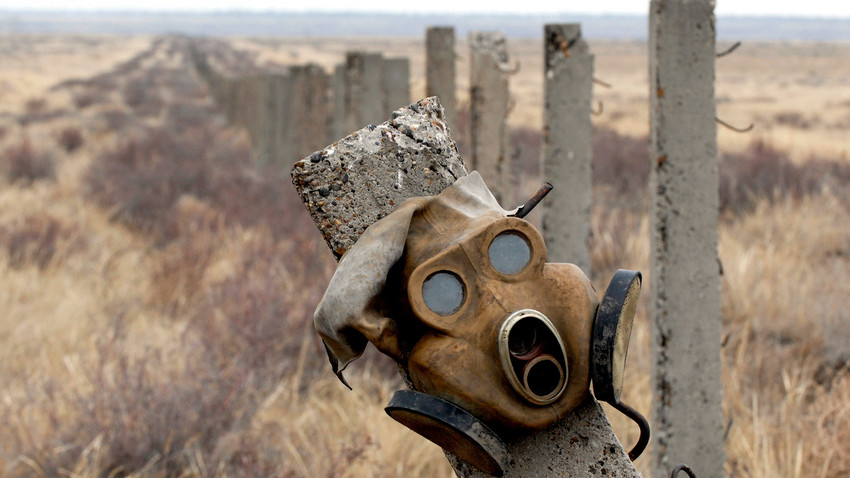 Today the city of Kurchatov in the Kazakh steppes is still a place of secrecy and resembles an atomic ghost town. In order to enter, a government permit is still required. The city was built for the scientific elite during the Soviet period when the population was 50,000.

Getty Images
Some of these huge explosions shifted tectonic plates and triggered earthquakes.

After the explosion of the first Soviet atomic bomb on Aug. 29, 1949, Boztayev, who helped test the bomb, wrote in his memoirs: “Just picture the terrible scene; steppe eagles and falcons, exposed to light radiation, had charred feathers on one side and white eyes. They sat on telephone wires and dared not move when we approached them. Elsewhere we saw a dead pig that was badly swollen and black because it was burned. Doctors didn’t manage to carry the dead animal away. Overall, it was a horrifying sight. These are the terrible consequences that mankind’s greatest invention holds.”

In 1949 the first Soviet nuclear bomb known as RDS-1 was detonated at the Semipalatinsk Test Site (“The Polygon”) on the eastern outskirts of Kazakhstan. However, a few years later, Soviet leaders realized that no matter how far they carried out tests from local populations, the environmental consequences would still be catastrophic.

So in the nuclear powers (the U.S., USSR, and Great Britain) signed the Treaty of Moscow which banned nuclear weapon tests in the atmosphere, outer space, and . They agreed to only carry out underground nuclear tests.

Underground nuclear explosions ‘at the touch of a button’

For this kind of nuclear testing, miners create tunnels at the test site (horizontal or sloped tunnels below the ground). Each tunnel is reinforced on the inside so that radiation and nuclear contamination does not penetrate the surface and seep into the soil.

After the drilling work was completed, the tunnel was converted into a test chamber and a cart carrying a nuclear warhead that was as powerful as one kiloton of TNT was dragged along the tracks into the chamber (the bomb detonated in Hiroshima in 1945 was 20 times more powerful).

One explosion could increase the pressure inside the chamber to that of several million atmospheres. In order to avoid this, the tunnels were fitted with three additional plugs so that decomposition traces did not reach the surface.

The first plug consisted of a reinforced concrete wall and a crushed stone backfill that was 40 m long. Further down, a pipe was fitted so that a stream of neutrons and gamma radiation could reach sensors on devices that monitored the development of a chain reaction.

The next plug was made of reinforced concrete wedges that were 30 m long. And the last line of "" was 10 m long and located 200 m from the of the explosion. Scientists installed several devices in this place to measure shock waves and nuclear radiation.

The of the explosion was marked on the surface of site with a special flag directly above the test chamber. Scientists carried out the explosion while sitting in a bomb shelter five kilometers away.

first Soviet explosion caused a rockfall, and the ground above the rose by four .

Underground explosions proved to be the most environmentally safe method to use in comparison to sea and atmospheric tests. After the detonation, dosimetrists and workers did not detect any radiation on the surface, and the whole tunnel from the mouth to the third plug remained intact, thereby allowing scientists to extract all necessary data from their devices.

Later it was discovered that nuclear weapons of a certain size could cause man-made disasters and earthquakes. The most powerful underground atomic explosion in history was produced by the U.S. military in 1971 on the uninhabited island of Amchitka (Aleutian Islands, Alaska).

Scientists used a five-megaton thermonuclear bomb to study the seismic effects of a possible similar attack. This explosion triggered a 6.8 magnitude earthquake and raised the ground level by five meters. It also triggered landslides along the coastline and shifted tectonic plates on the island over an area of 300 square km.

To this day, you can find dozens of open radioactive tunnels in former USSR territory. After the collapse of the Soviet the military had no plans in place to preserve the test site. Many "nuclear " (test debris, measuring instruments, and devices charred from radiation) were plundered by diggers and they can still be found on the black market today. Anyone can get their hands on a piece of Chernobyl or the Fallout universe if they really want to.