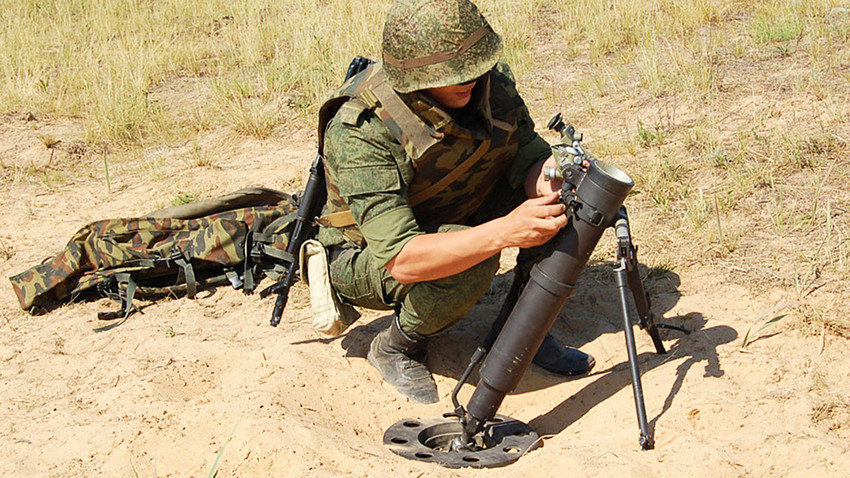 Uralvagonzavod
The 2B25 ‘Gull’ mortar fires 82mm shells from distances of up to one kilometer. Death from above, out of nowhere!

At the beginning of September Russian designers unveiled the first 2B25 “Gull” mortar, which - like a silenced pistol - has an "internal" sound suppressor and, providing trials go well, the Russian army will start using it in the early 2020s. Simply put, the sound from the explosion of propellant gases stays inside the barrel - it’s contained in the bomb's tail. As a result, firing the mortar shell doesn't produce a flash or smoke, or much sound.

Thanks to the principle of "locking" the propellant gases inside the gun, a commando unit will be able to fire at the enemy from a comfortable distance of 300-400 meters, which will make hitting targets far easier.

Furthermore, the new mortar is much lighter and more mobile than its predecessors. The new weapon only weighs 13 kg, including all accessories. And to mobilize the weapon soldiers will need only 30 seconds.

Silenced weapons rose to prominence several decades ago. Sound suppressors have been put on pistols, assault rifles even large-caliber sniper rifles, which, in the latter case, can almost double their size.

However, for artillery guns that fire 82mm shells, an "integrated sound suppressor" is a rare feature. But any Spetsnaz (special operations) detachment will hugely benefit from using such a gun - they’ll be able to effectively operate in the shadows while taking out the enemy.

And now Russian forces have such a weapon thanks to the country's first silenced mortar.

It’s a light and weapon that can hit the enemy with 20 82mm high-explosive fragmentation shells per minute. At the same a detachment can conduct fire from this weapon simultaneously from several directions, and then change position and continue the attack from a new hidden position.

During the Afghan War, mortars helped Soviet ground forces attack the enemy in uncovered firing points, such as high in the mountains. However, the whistling sound of the mortars often gave them away and the enemy could duck for cover. However, these new “Gull” is far more covert.