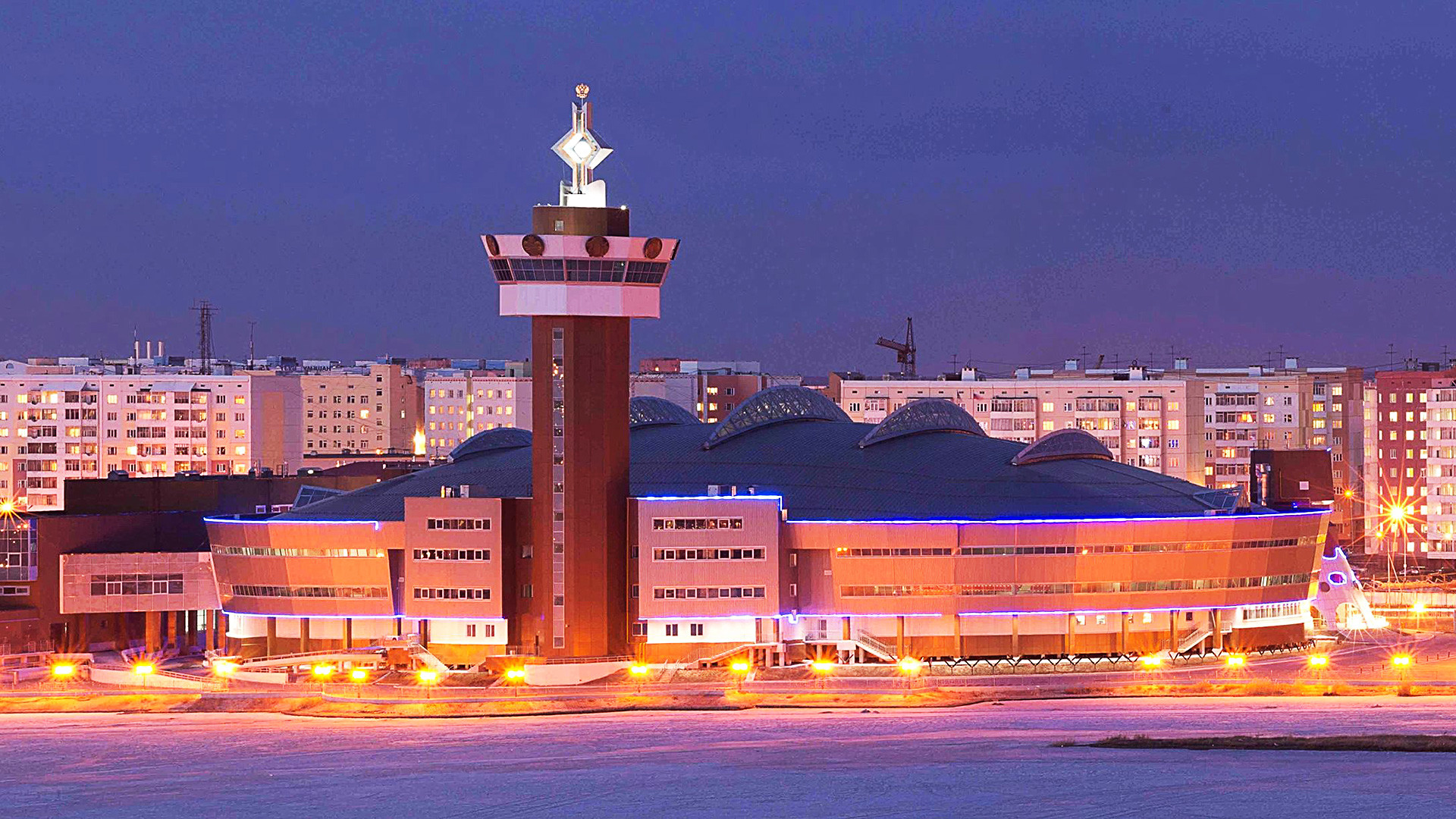 North-Eastern Federal University in Yakutsk
Yakutsk sure is cold, but the battle here is against warming, not frost.

Almost the entire north-eastern part of Russia is covered with permafrost. Despite the harsh climate, towns and cities still get built here.

Yakutsk is the largest city in the world sited on permafrost, home to over 300,000 souls. Despite the severe weather conditions, the population increases year on year, and the city itself is expanding: new residential areas and modern public spaces with a Far North flavor are popping up all the time 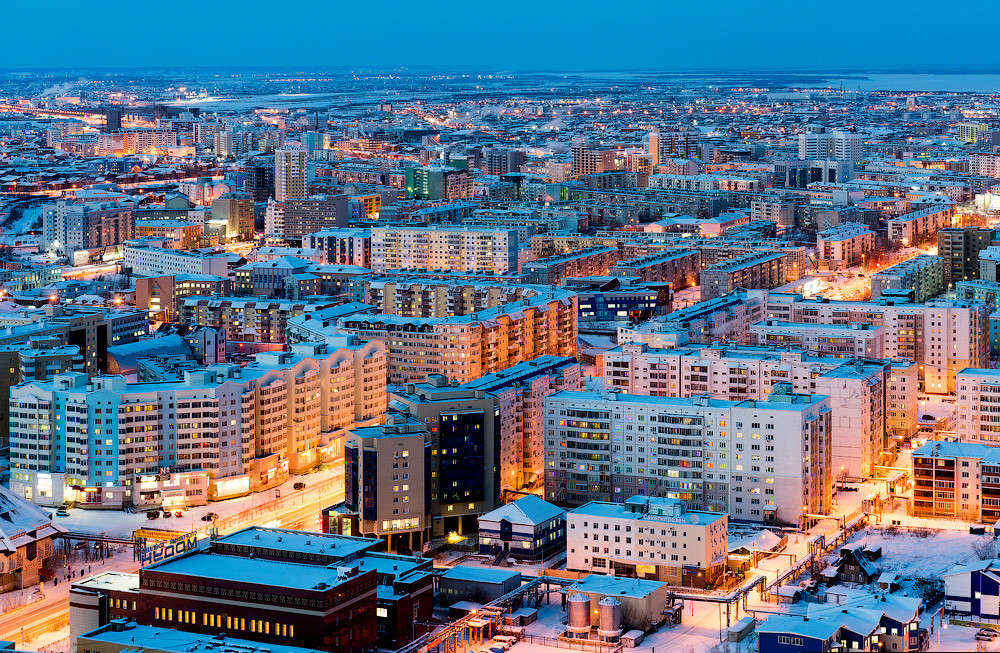 architect Sergey Permyakov, who is involved in the Architects.ru professional development program, tells about how to build a modern city on permafrost. 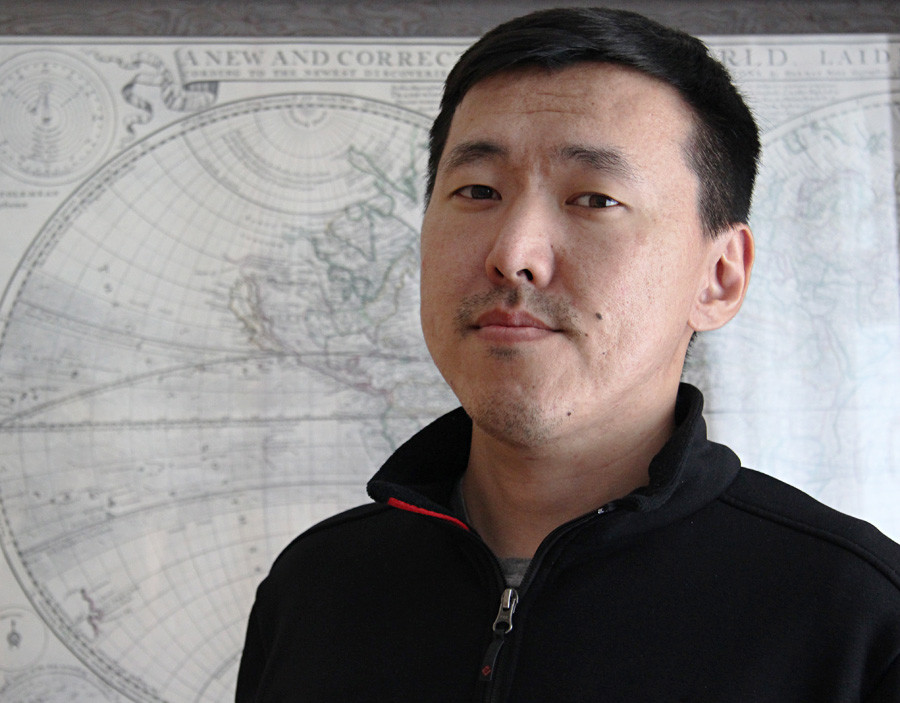 The Republic of Sakha-Yakutia is the largest (one-fifth of the country’s area) and coldest region of Russia. The climate here is sharply continental, which means that winter temperatures of -50 C (even -60 C) will surprise no one, while summers are a balmy +30 C. Given such a temperature gradient, the most important thing is to preserve soil stability, otherwise buildings and roads would go underground in the truest sense of the word. And this means that the permafrost cannot be allowed to melt.

“The first rule of the Far North is that nothing can be dug into the ground,” says Sergey. All pipes, heating lines, etc. must run overland and become part of the urban landscape. “We’d love to make use of them architecturally, say, for lighting, but so far it’s only on the drawing board,” says Sergey. 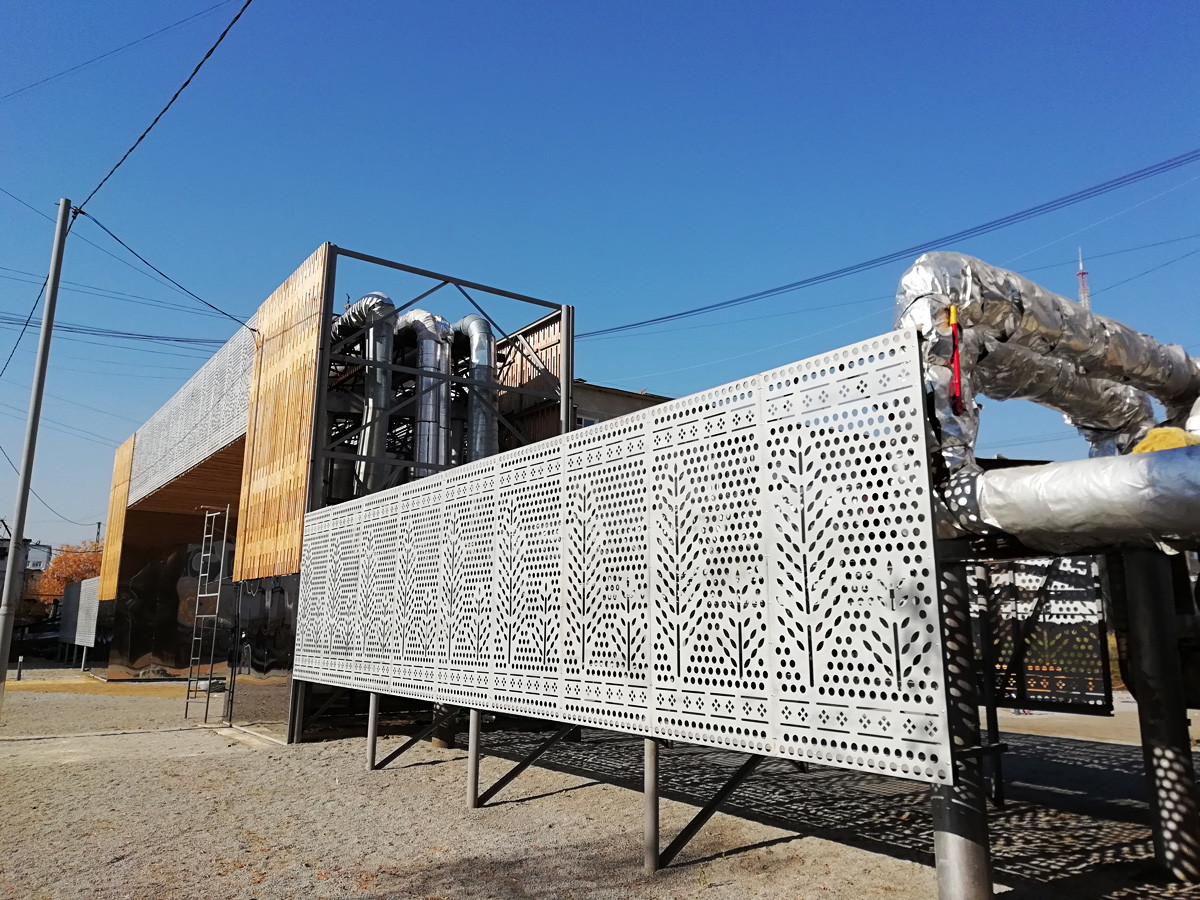 All buildings in Yakutsk stand on stilts to prevent the warmth they generate from melting the permafrost. Here too is the largest center in the Far North (North-Eastern Federal University), the Triumph sports complex—the first ever in the world to be built on stilts, and the Mamontenok circus, the world’s northernmost indoor arena. 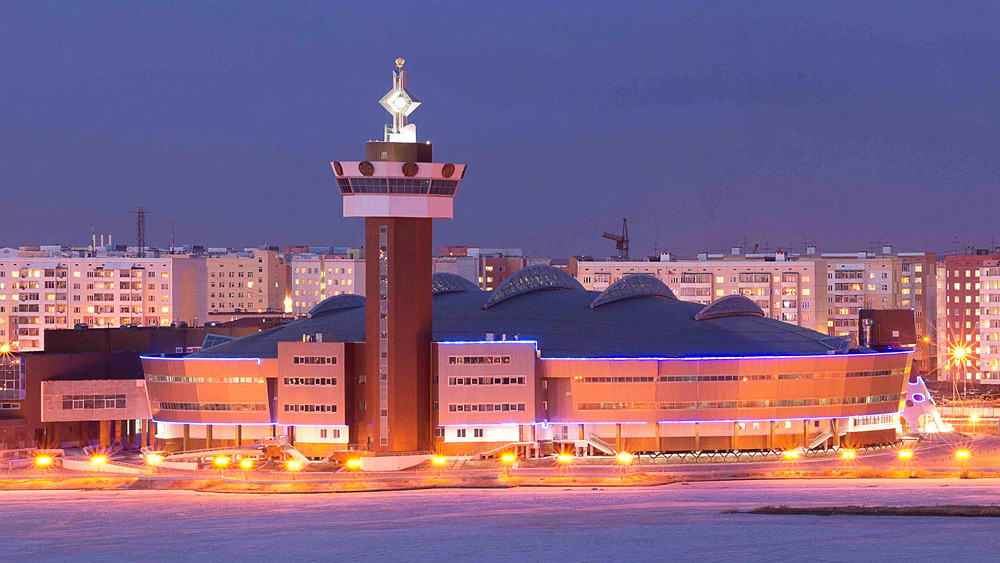 Yakutsk was founded by Cossacks in the 17th century, and the city is dotted with buildings from different epochs: preserved in the center are old merchant houses and churches, while the dormitory suburbs are packed with typical Soviet high-rise buildings, only this time on stilts. What's more, new residential neighborhoods are appearing in Yakutsk with a distinctly northern flavor: for example, there is a development project to build houses in the form of a mammoth tusk. 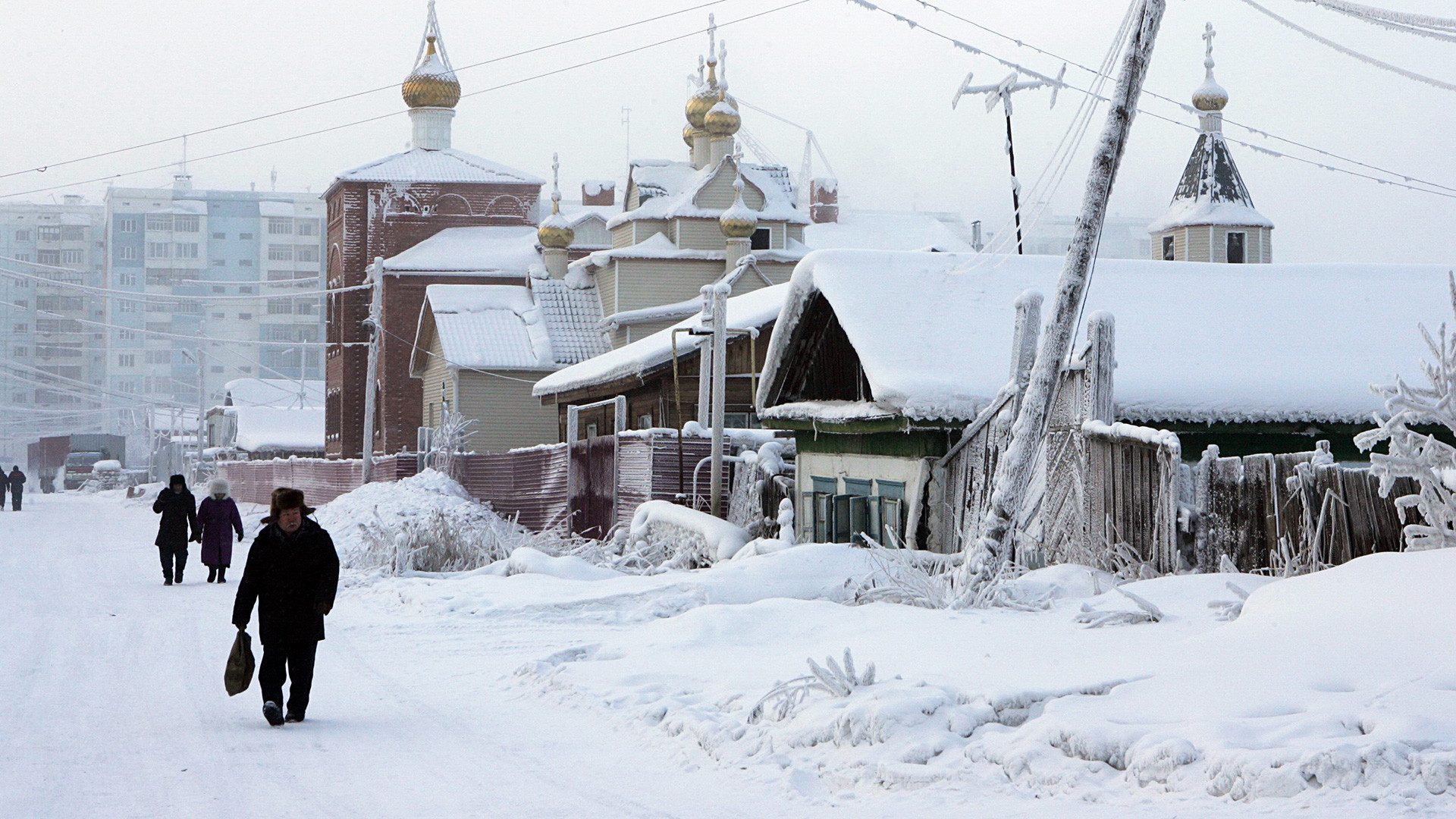 The old town in winter.

As in other northern Russian cities, the buildings are painted in bright colors in the belief that it helps to fight depression when the sun is hibernating and to navigate the streets in conditions of frosty fog 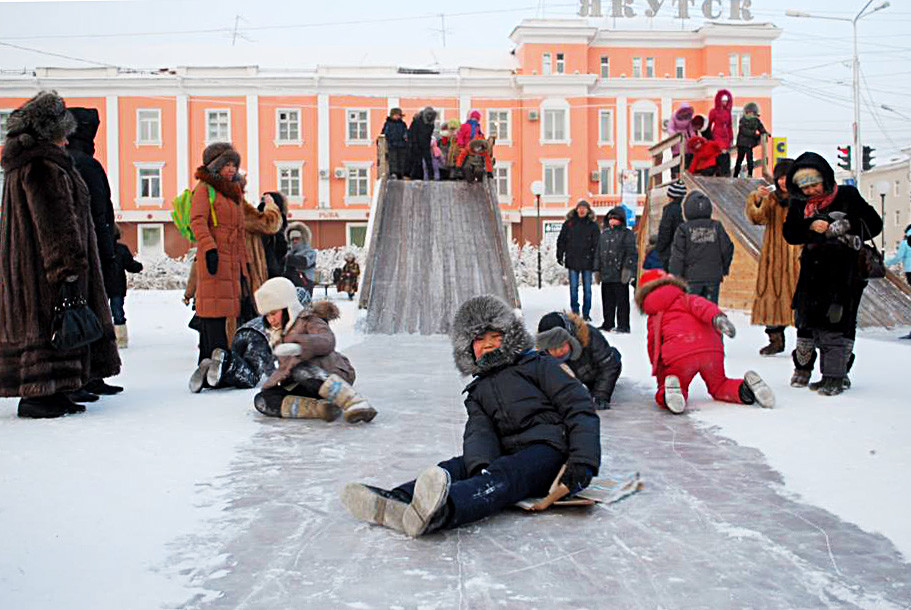 playgrounds in courtyards are built from eco-friendly materials, for example, timber.

In new residential complexes, children’s play areas are generally built not on the ground, but on the roof of the first floors, since the cold makes the construction materials brittle and unlikely to survive the winter 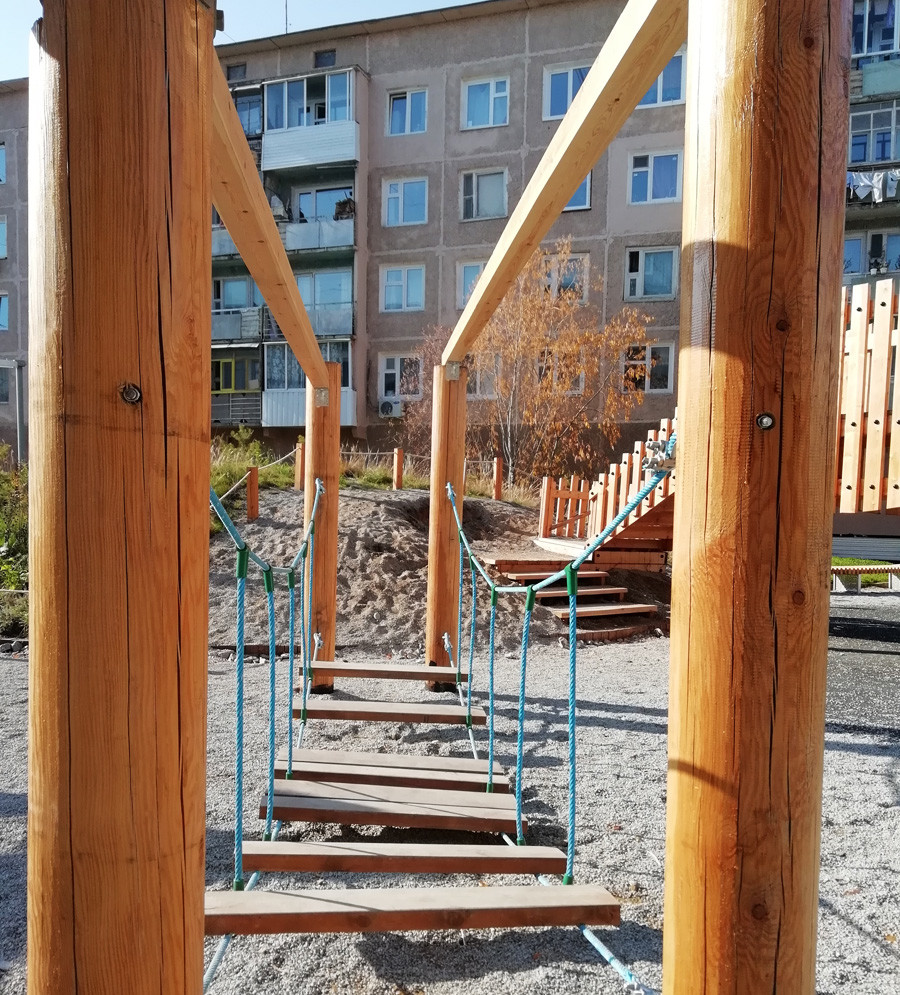 Wooden playground in the yard.

to solve the transport problem at -50 C

“The permafrost in Yakutsk means there are no underground parking lots. Instead, they are built on the first floors of buildings,” says Sergey 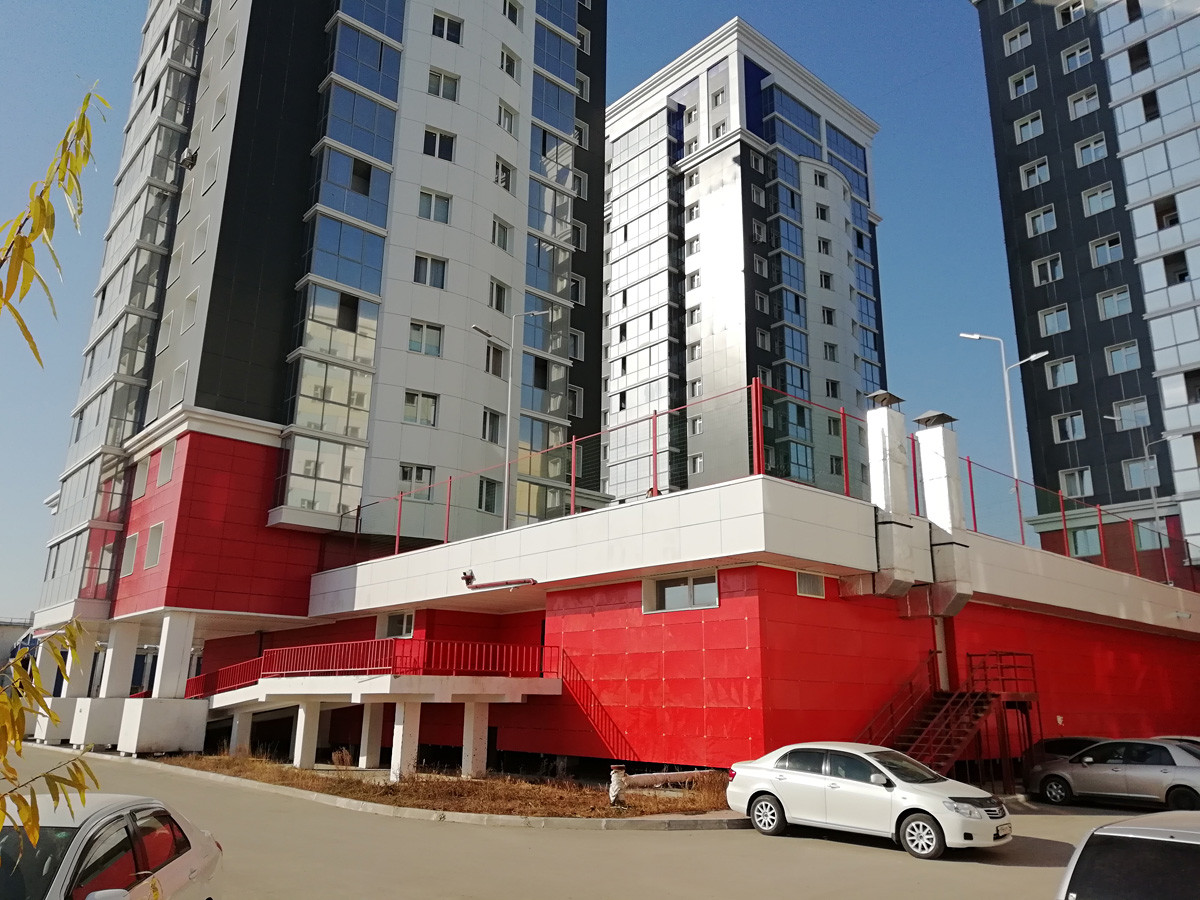 winter, most locals let their cars freeze up in the yard until spring and take public transport instead. There are sheltered stops for passengers with closed heated pavilions containing screens with timetable information, sockets for recharging phones, a TV and Wi-Fi 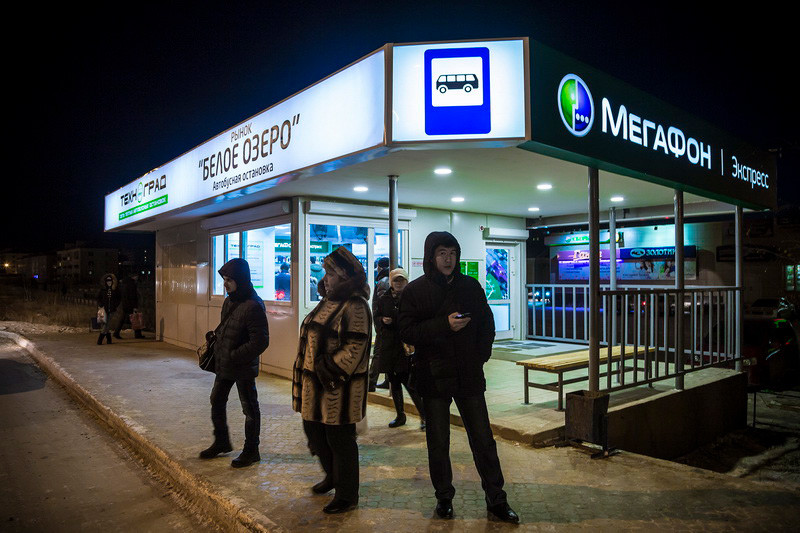 Not your average bus stop.

, if the car is needed, this is what happens: the engine is started in the fall and switched off in the spring. All this time it’s left alarmed with the key inside. No need to fear carjackers. “Who’s gonna drive off in -50 C? Not many people walk the streets at that temperature,” says Sergey 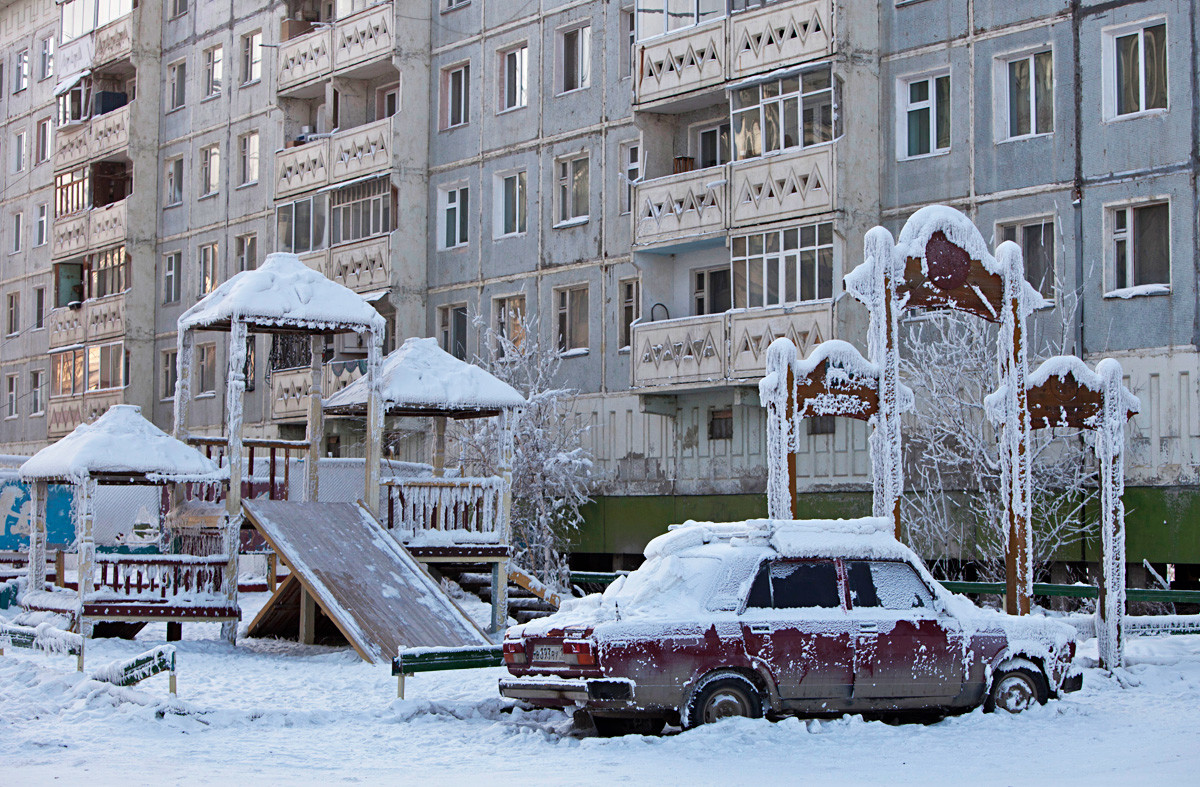 Frozen car in a yard.

The main summer problem in the city is dust — Yakutsk has very dry air, lots of dirt roads and greenery. There is even a municipal program to combat the dust problem: roads must be covered with asphalt, and the space between them and roadside buildings must be either a green zone or filled with gravel or other non-dust material. However, the climate is such that plants cannot take root, so efforts are focused on preserving existing trees. “Felling in Yakutsk is prohibited, so if we build a road, we try to go round any trees,” says Sergey 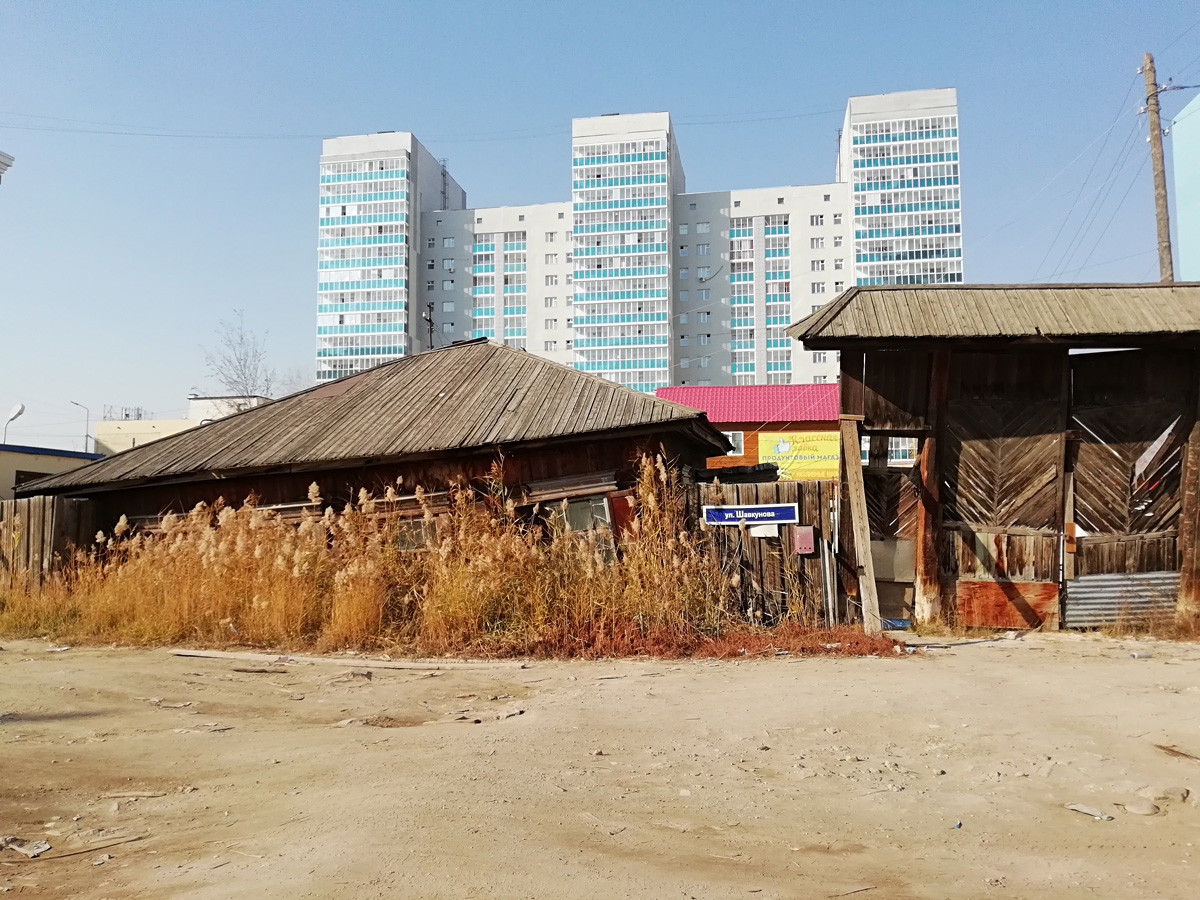 The melting of permafrost aftermath.

will Yakutsk be like in ten years? “Architects want to see a modern city, and our task is to create public spaces to suit the climate,” says Sergey. There are many natural lakes in the city, and they are focal points for people. That's where new parks and leisure areas are being laid out.” 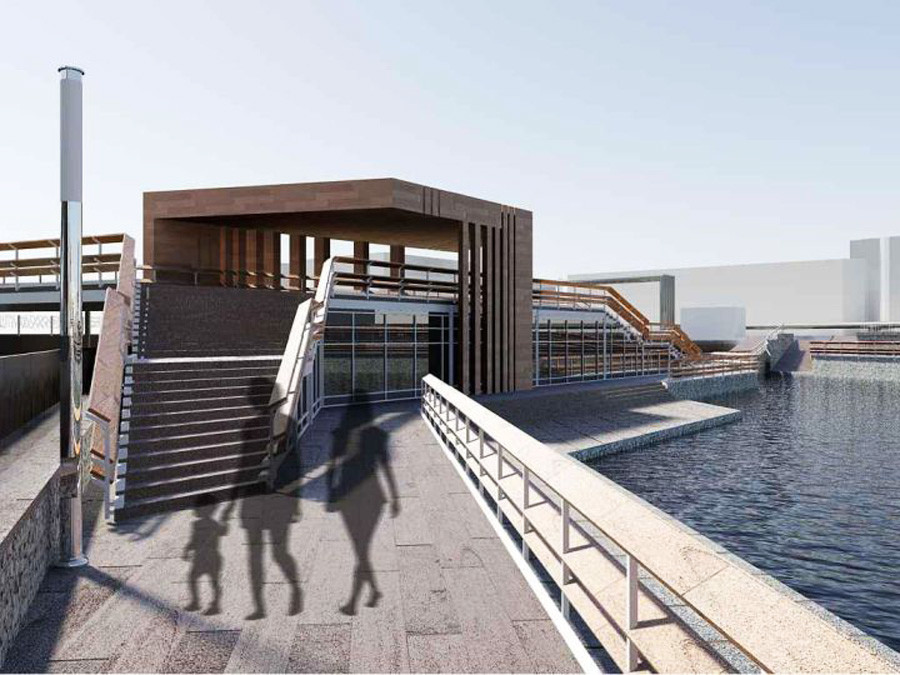 Another public space, “Gates of Yakutsk,” is set to appear near the airport. A stylized life-size model of a Siberian fort, it will greet all visitors to Yakutsk who are not afraid of the cold. 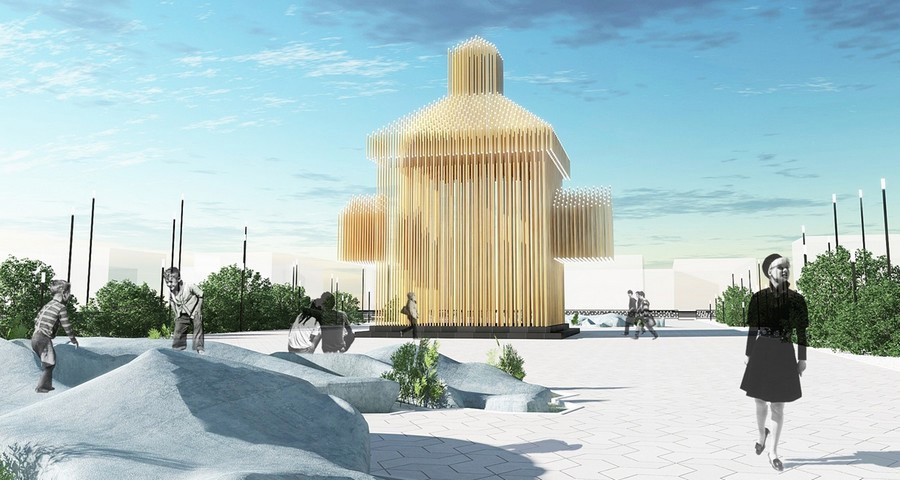