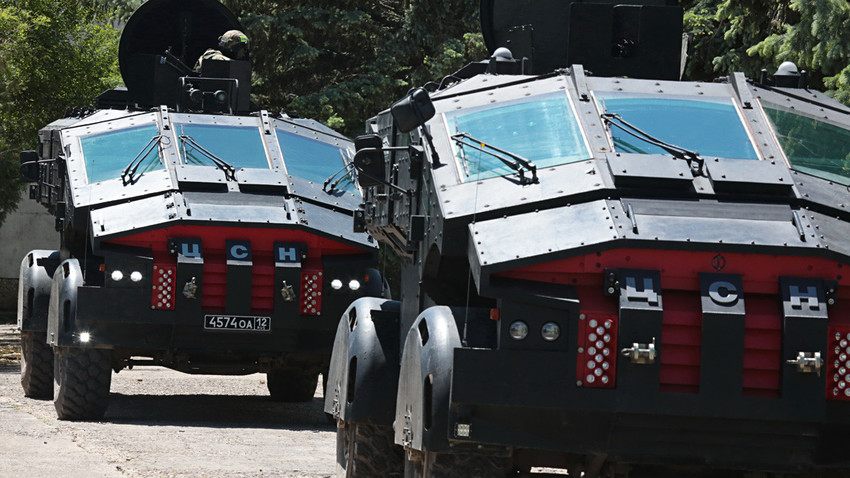 Falcatus armored vehicles of the Federal Security Service (FSB) are seen here during a drill in Evpatoria on releasing hostages taken by a mock terrorist group.

Maks Vetrov/Sputnik
Russia Beyond brings you the baddest and most powerful ams to be unveiled in the last 12 months.

This is a new unmanned underwater vehicle which will be capable of endlessly traversing the seas and oceans using its nuclear-powered propulsion unit.

According to the president, it will be a silent-running robot that will travel along the seabed as it closes on its target. "It operates at a very great depth and at range at a speed exceeding many times that of submarines, the most up-to-date torpedoes, and all types of surface vessels, even the fastest," Russian President Vladimir Putin declared in March 2018.

Speaking on March 1, Putin said nothing in the world today that can eliminate the threat posed by this system. Experts believe that Poseidon is the result of research under the Status-6 project to develop an underwater weapon of mass destruction.

"It’s presumably a development of a Soviet project - the underwater robot is designed to deliver a cobalt bomb to the enemy's coastline undetected. Its detonation would create a tsunami capable of wiping a large city off the face of the earth in an instant," TASS military analyst Viktor Litovkin told Russia Beyond.

He said the detonation of a cobalt bomb would have a similar effect to a nuclear warhead.

At the Army-2018 arms fair, Kalashnikov Concern unveiled its artificial intelligence sentry, which resembles the turret with a twin-barrelled gun in the Command & Conquer computer game.

The Kalashnikov robot's artificial intelligence is based on neural networks and is able to learn and develop during operation. The turret, which is fitted with a 12.7 mm machine gun, can autonomously detect and identify targets and proceed to eliminate them one by one, having prioritized them in accordance with the threat that each one represents.  For instance, it will riddle an armored vehicle carrying a dozen or so troops with hot lead, before turning its attention to solitary targets on the battlefield.

At the same time, there is nothing to stop the artificial intelligence functions being switched off and fire direction being taken over by a human user, while the machine continues to display enemy targets from the battlefield on a screen.

A feature of the robot is that it can operate not only against ground targets like enemy infantry or light but also against seaborne and air targets. So the weapon could be a highly effective measure against the small combat drones that have presented a serious threat in military operations by coalition forces led by the U.S. and Russia in the Middle East.

The combat module can be installed either individually at a specific spot or as part of a number of "sentry guns" grouped together in a unified arrangement for coordinated operations.

The FSB's special-purpose sub-units have acquired a new armored personnel carrier, the Falkatus.

The futuristic vehicle incorporates the boldest engineering solutions and will replace out-of-date army APCs for use in urban areas.

The Falkatus is based on a KamAZ body and has 4x4 operation. Externally, the APC has a very aggressive appearance. It will have a 17-liter, eight-cylinder engine boasting 700 hp. All this will allow the multi-tonne iron monster to reach speeds of 200 km/h with 12 troops on board.

The vehicle's design protects personnel from assault weapon and fire, and its V-shaped underside dissipates blast waves from mines.

The vehicle's hood is significantly extended at the front of the vehicle. The "blind spot" here is remedied with additional video cameras which give the driver a full view ahead. A similar situation applies to the parking sensors at the rear.