How Kalashnikov’s suicide drone will change the face of war 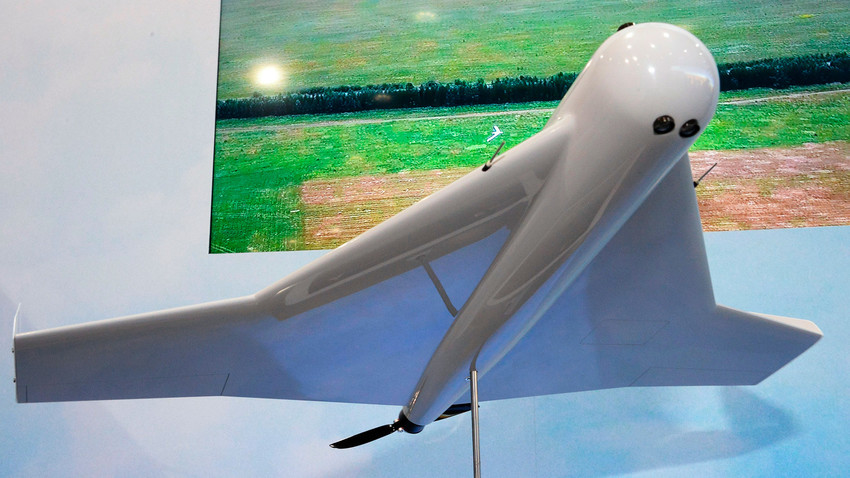 Alexander Melnikov/Sputnik
The “little terrorist” (as it’s known in Russian) can transform into a swarm of UAVs able to smash through hi-tech (and very costly) enemy air defense systems.

The KYB is a self-exploding drone with 3 kilograms of TNT on board. It is essentially a more technologically advanced version of the homemade “kamikaze drones” used by ISIS militants in Syria and the Middle East against US forces and their allies, as well as Russia.

Kalashnikov’s innovation can be used as a loitering munition, which hangs in the air in the combat zone until instructed to strike.

Weapons of the future

“This cheap and simple UAV has a production cost of around $100 and features an bomb. It quietly buzzes in the air and then swoops down, blowing up an enemy tank worth several million dollars. Plus, it is almost impossible to detect when suspended in the air at an altitude of 100-200 meters,” a Russian military source told Russia Beyond.

According to the source, the KYB is part of a growing trend in the development of future weapons, which will greatly facilitate warfare. When using such devices in enemy troop areas, there is no need to deploy artillery, tanks, volley fire systems, or helicopters and bombers.

“The main load on board the drone is the transmitter-receiver station, camera, and bomb. The camera provides a view of the entire area of operations, and the drone can be deployed anywhere, from the Syrian desert to cities. The next step in the development of this weapon will be to create a swarm of such UAVs,” noted our source.

All the world’s leading military powers, including the US, Russia, France, and China, are looking for a cheap yet effective air armada. The Chinese have already demonstrated a swarm of UAVs with AI-coordinated flight and behavior. However, such an AI armada has yet to engage in actual hostilities.

Attack of the exploding drones

Even militants have been making increasing use of drones, albeit without sophisticated swarming techniques. The last time a “dumb” group of UAVs lit up the skies was in 2018 during an attack by ISIS militants on Russia’s Airbase in Syria.

The terrorists launched several homemade drones packed with explosives, also own-produced. The intention was to destroy a group of fighters on the ground, but their plans were thwarted by the Pantsir-S1 air defense system deployed around the airbase.

All the drones were destroyed, but the attack highlighted an unexpected weakness in the hi-tech air defense complexes used by Russia and all the major powers. Such systems are designed to counter similarly hi-tech weapons: multimillion-dollar fighters, bombers, and missiles. Engineers did not foresee having to cope with “radio-controlled cardboard boxes” carrying homemade bombs.

In the end, the Pantsir-S1’s entire and very costly ammunition was used to bring down the cheap drones; in a hypothetical battle against a more advanced adversary, such a diversion would open up the skies to fighters and bombers with powerful bombs.

“Self-exploding drones are radically changing the face of warfare. Today, the world’s armies are beginning to these weapons to their objectives and develop ‘cheap’ means to combat them as a matter of urgency,” added Russia Beyond’s military source.

One of these means is a portable electromagnetic weapon, which you can read about here.