Russia vs NATO: What it takes to become an ELITE Spec Ops officer

Science & Tech
Nikolai Litovkin
Alexander Vilf/Sputnik
Blood, sweat and (sometimes) broken bones is an essential part for those who want to prove themselves worthy of being named among the best of the Special Operations officers.

You wake up in the morning and understand that you can not stand your office life anymore. So you decide to drastically change your life and become not just a regular conscript, but an elite marine or airborne.

So what do you have to do to achieve this?

Most importantly, in order to become a member of elite army unit, you need to have no less than health status. So everything, ranging from heartbeat to the meniscuses in your knees, is supposed to be in perfect shape, in order to compete among the top officers for a position in elite Spec Ops units conducting anti-terror operations in the Middle East, Africa, Latin America, and Southeast Asia. 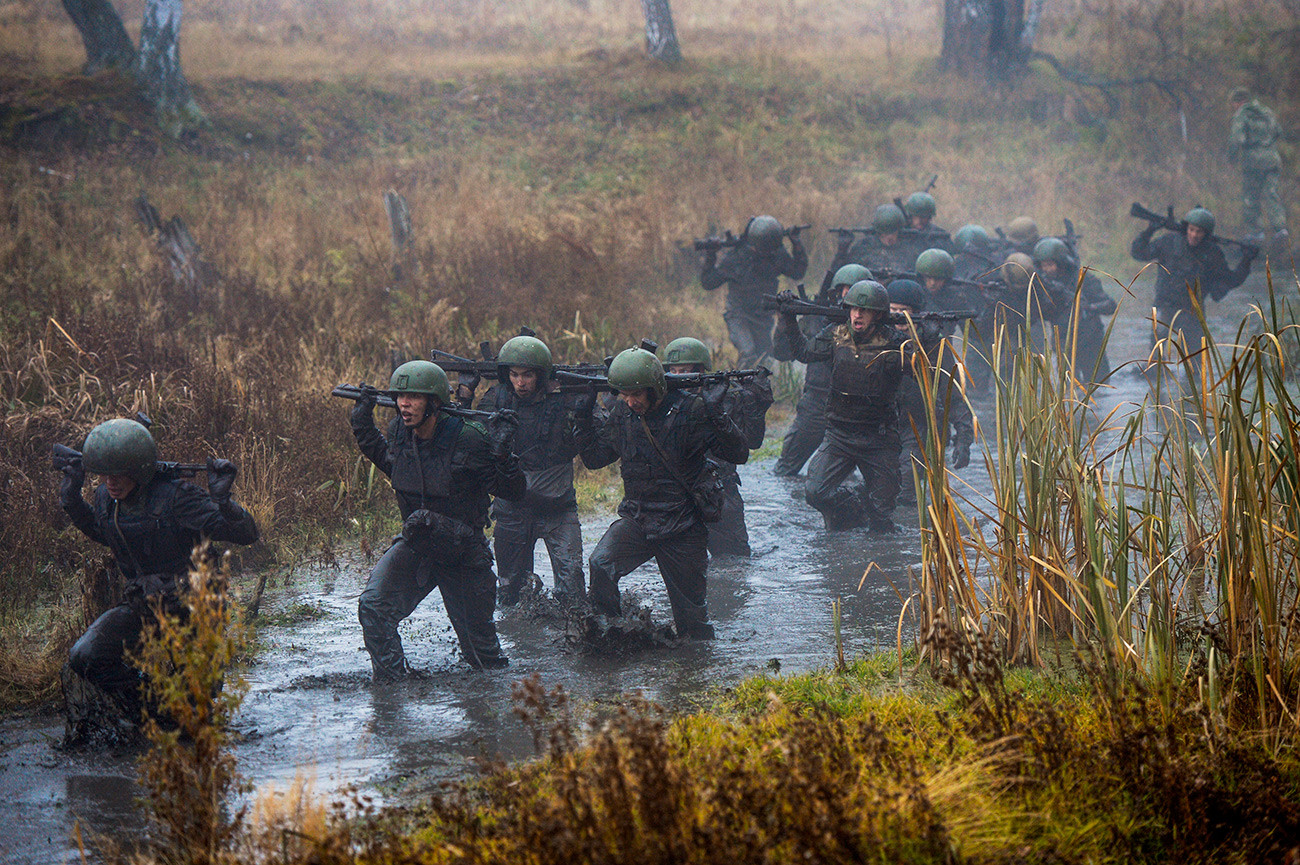 The crimson beret is a symbol of the elite Spec Ops officer in Russia. The right to wear it is earned through literally blood and sweat and those who wear them are the first in line to be sent to war zones or on missions inside and outside of Russia.

Those who desire a crimson beret have to pass three tests in a row with no recovery time in between. 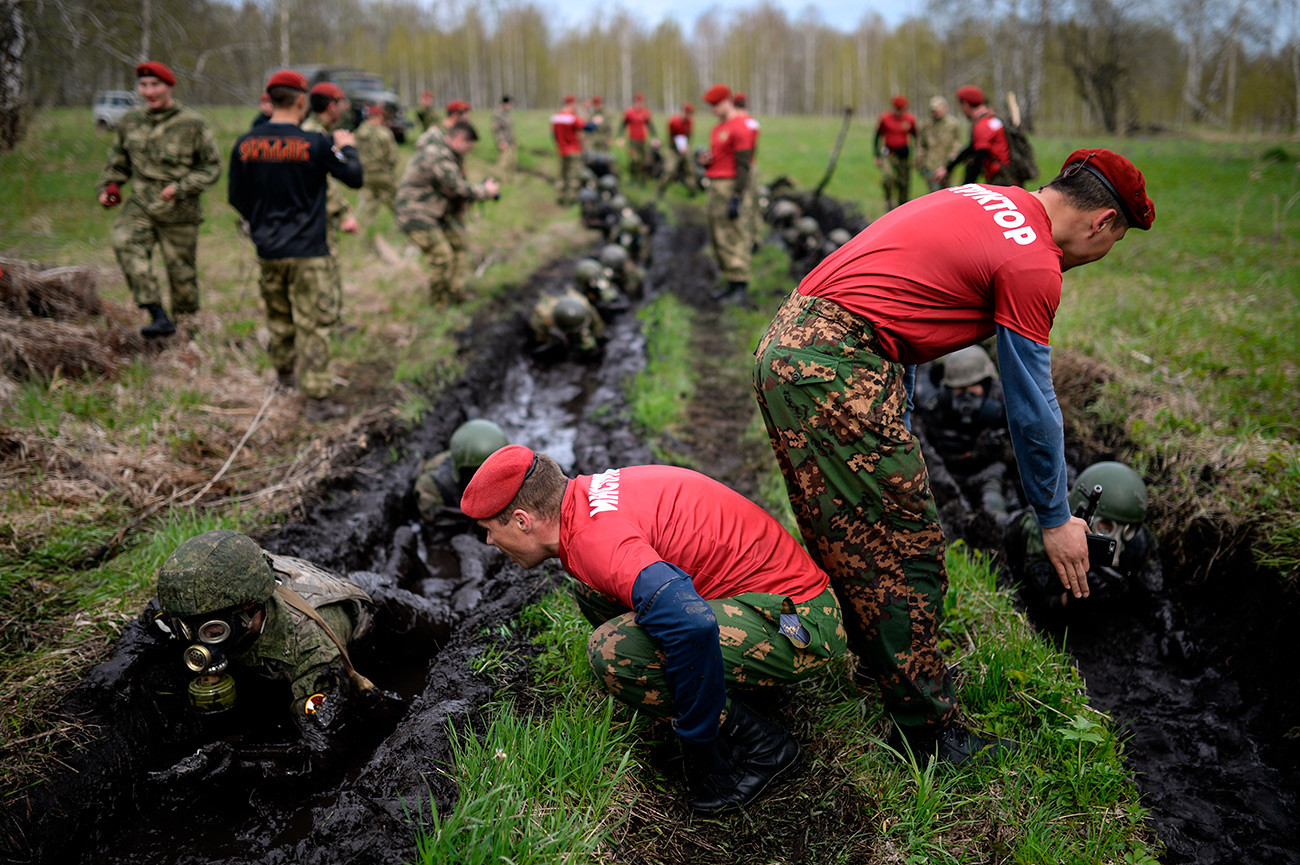 The first is a ten-kilometer cross-country run with a 60 lb (27 kg) backpack, an AK-74M rifle and a bottle of water on your belt. The point of the race is to overcome numerous land and water obstacles in full battle equipment, save enough strength to complete shooting exercises at a range, and finally, to fight 10-minutes straight with three experienced Spec Ops instructors.

The cross-country running stage will pass through swamps, rivers and forests in the middle of nowhere, where you will be taken with a group of 100 other candidates and a number of professional soldiers who will be throwing training grenades right at you and shooting the ground next to you to test your character and find out whether or not you’re able to complete a task on a real battlefield. 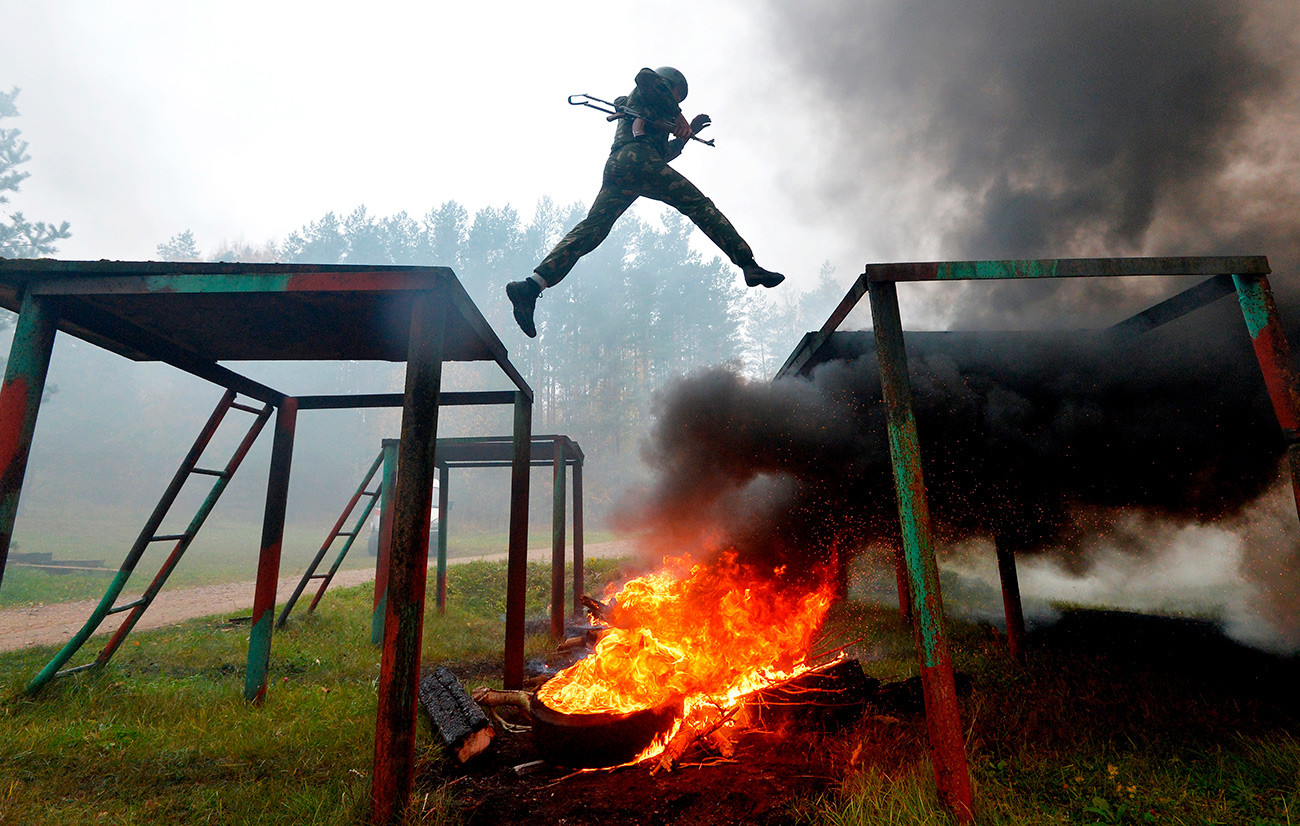 These “sadists” will be running alongside you, cursing and shouting at you. They will also whisper in your ears, phrases like: “You don’t need it!” “Give up!” “Just say a word and you’ll be taken back to the city to your warm bed!” This kind of intense psychological pressure is one of the essential parts of Spec Ops training all over the world that you have to pass if you really wish to become one of the toughest men on Earth.

After completing this run, a candidate has to go straight to a shooting range with the exact AK he’s been running with throughout the forest and shoot a number of targets. The key to this stage lies in the first stage - ensuring your rifle is clean after being dragged through swamps and woodlands and ready to shoot the enemy. So if your gun needs cleaning - you’re out.

Yet, if your rifle is impeccably clean and you successfully hit all designated targets at the range, then you’re taken to the last - and hardest - stage: a 10-minute MMA-style fighting session.

Trust me, this is the hardest part of this day-long entrance test, as by the moment you have to enter the ring you’re already about to pass out after tiresome and stressful challenges of the cross-country run and shooting 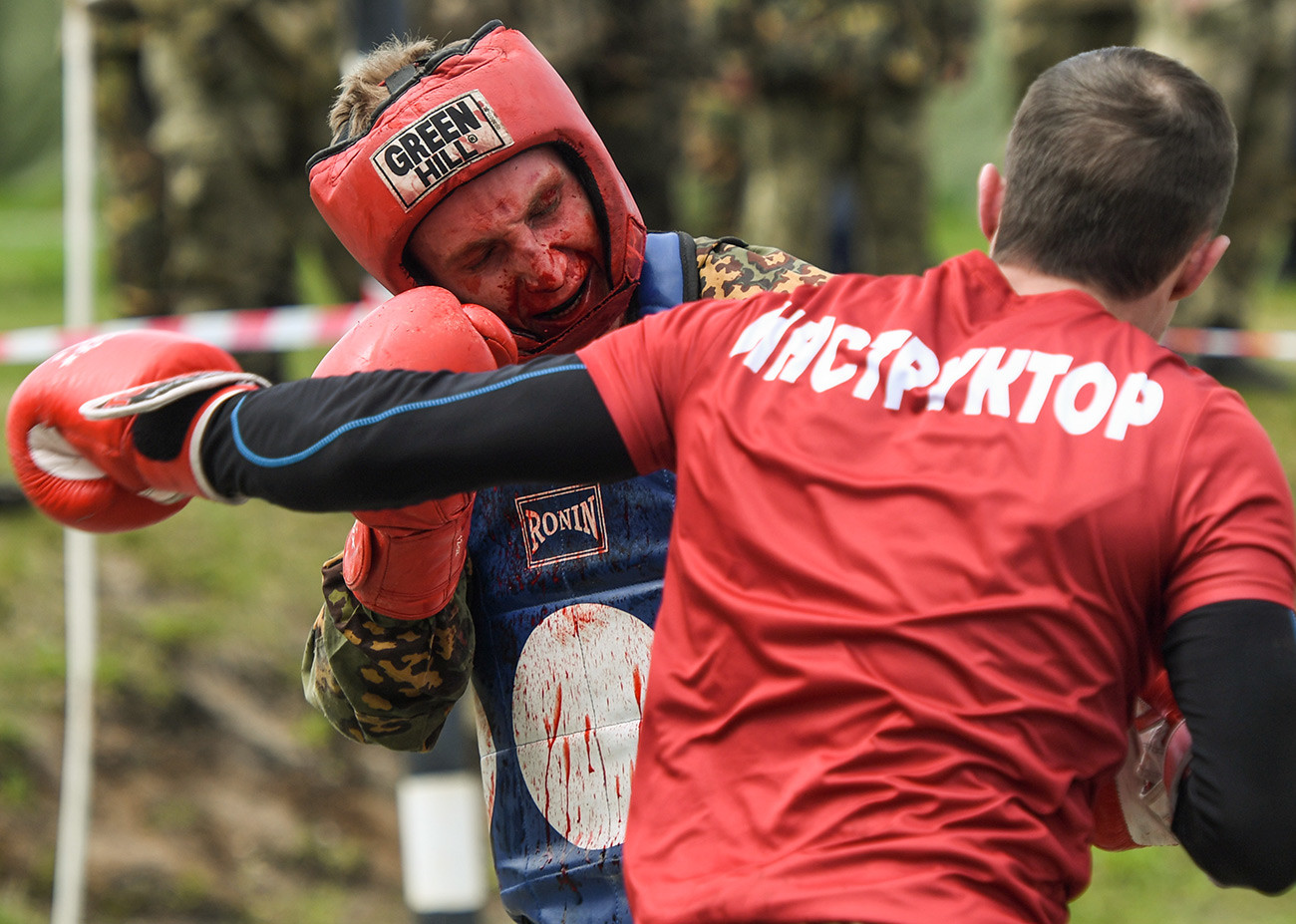 , you have to take on three professional fighters one after the other inside a ring. You have to fight for 10 minutes straight without any time to recover between fighting opponents who are ordered to beat the living crap out of you! So, broken bones and knockouts are an inevitable part of this stage.

If you’ve withstood all this and are standing on your own two feet by the end of the tenth minute, you’re awarded the crimson beret and become a member of the elite Spec Ops “club”.

If you fail any part you’ll only be able to attempt it once more the following year. 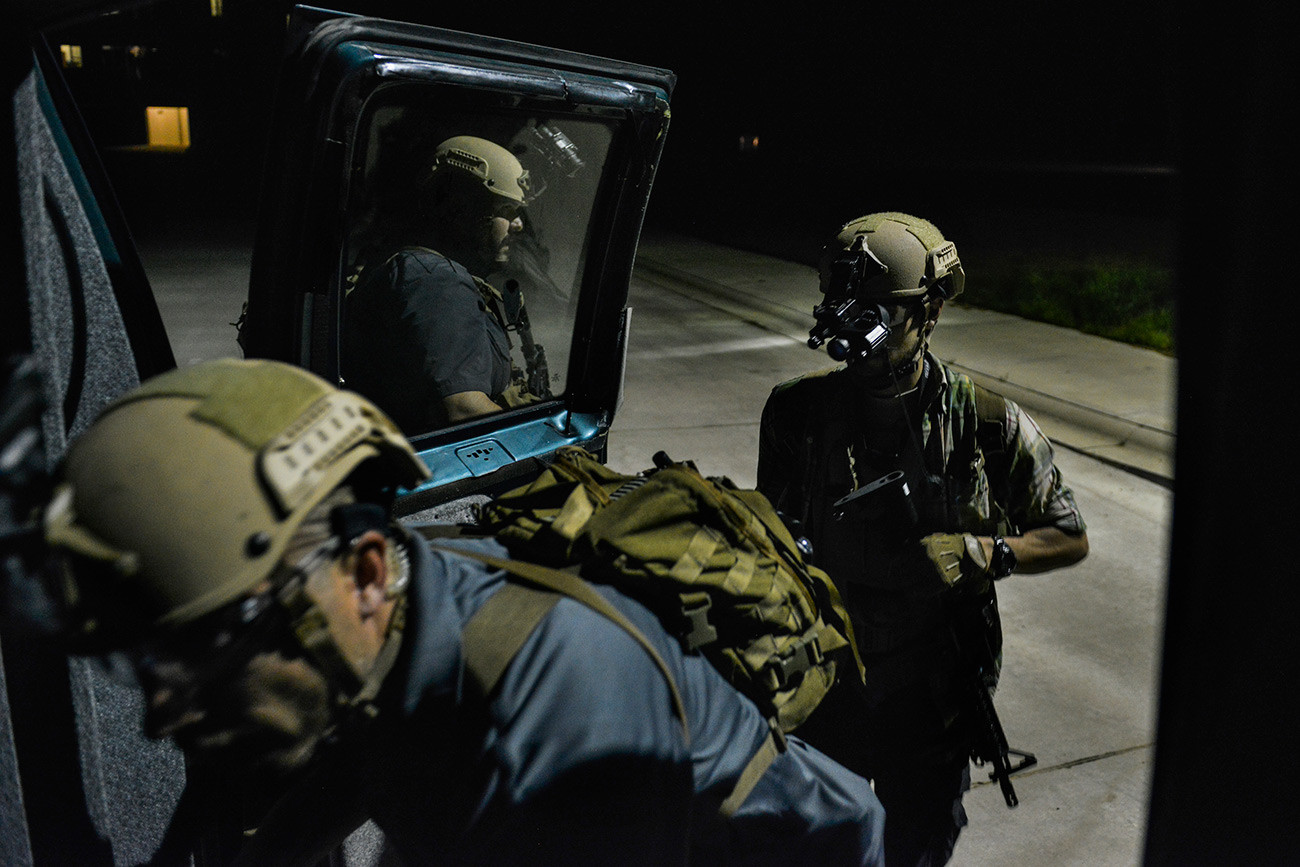 The motto of the SAS is “Who Dares Wins” and on the very first day of recruitment, instructors meet candidates saying: “We're not going to select the best of you. We’re going to try and kill you. And survivors will continue their education.”

Candidates are taken to a secret military base. There, their test starts right in the middle of the night, when woken up and thrown into the back of a truck, which drives off into an unknown place and dumps them there.

They have no idea where they are. There’s no map and nobody to guide them - just 100 infantrymen and police officers with dogs chasing after them. Their equipment also includes a 60 lb (27 kg) backpack, a rifle and a bottle of water. The goal is to make it back in less than 20 hours and not get spotted in the process.

Oh, and the locals in the area are ordered to report seeing any “strangers” to local police stations. This 40 mile (64 km) “marathon” has been called Endurance for a reason 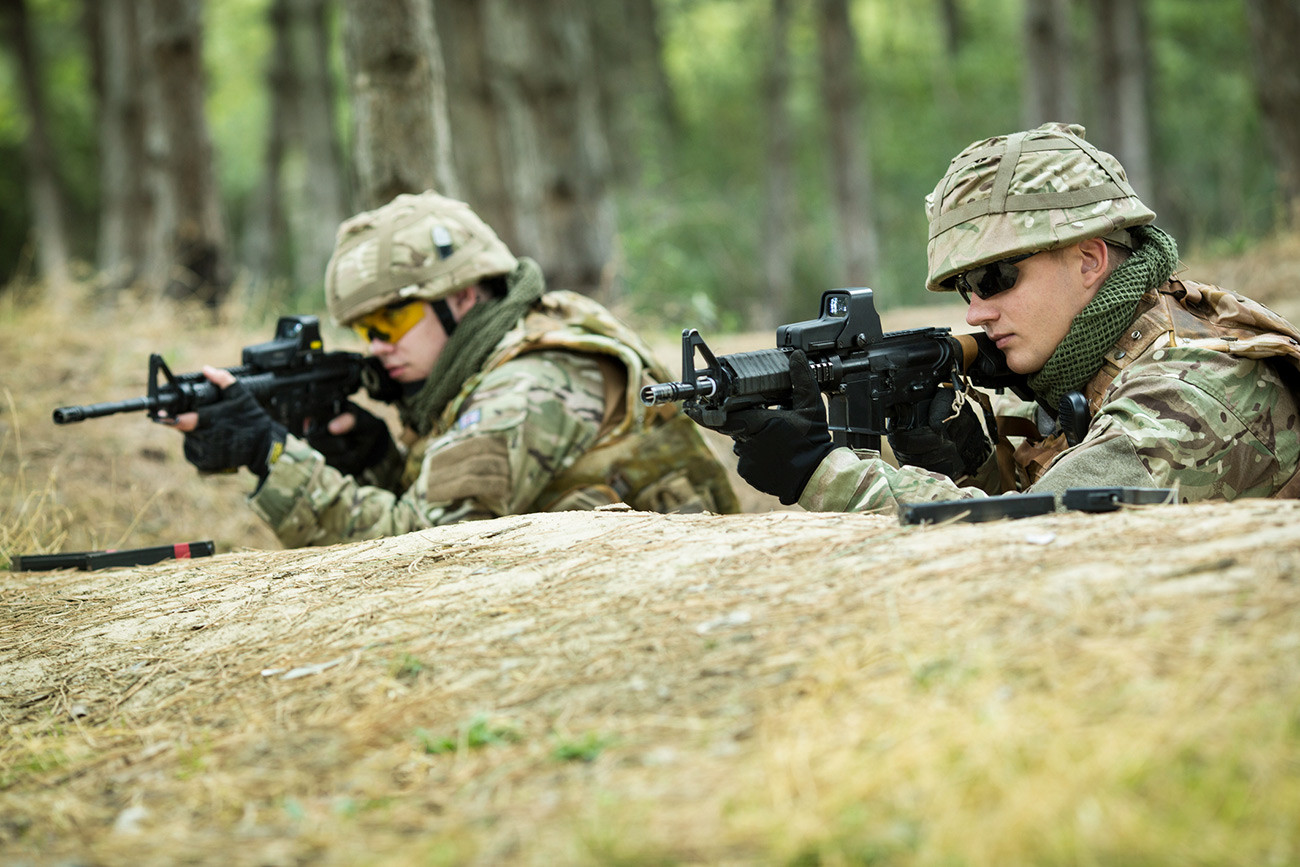 the candidates get back to base they immediately have to complete another four-mile run within 30 minutes.

The candidates have to prove they are able to survive in any circumstances. And when you finally get caught, the officers take you in for interrogation.

They won’t break your fingers or put needles under your nails, but be sure they can tie you to a chair and beat the shit out of you until you break down and reveal the information they want from you. Passing this psychological test is essential for a SAS officer.

If you successfully pass the 40-mile run and interrogations, then you’re awarded the right to be named a SAS officer. 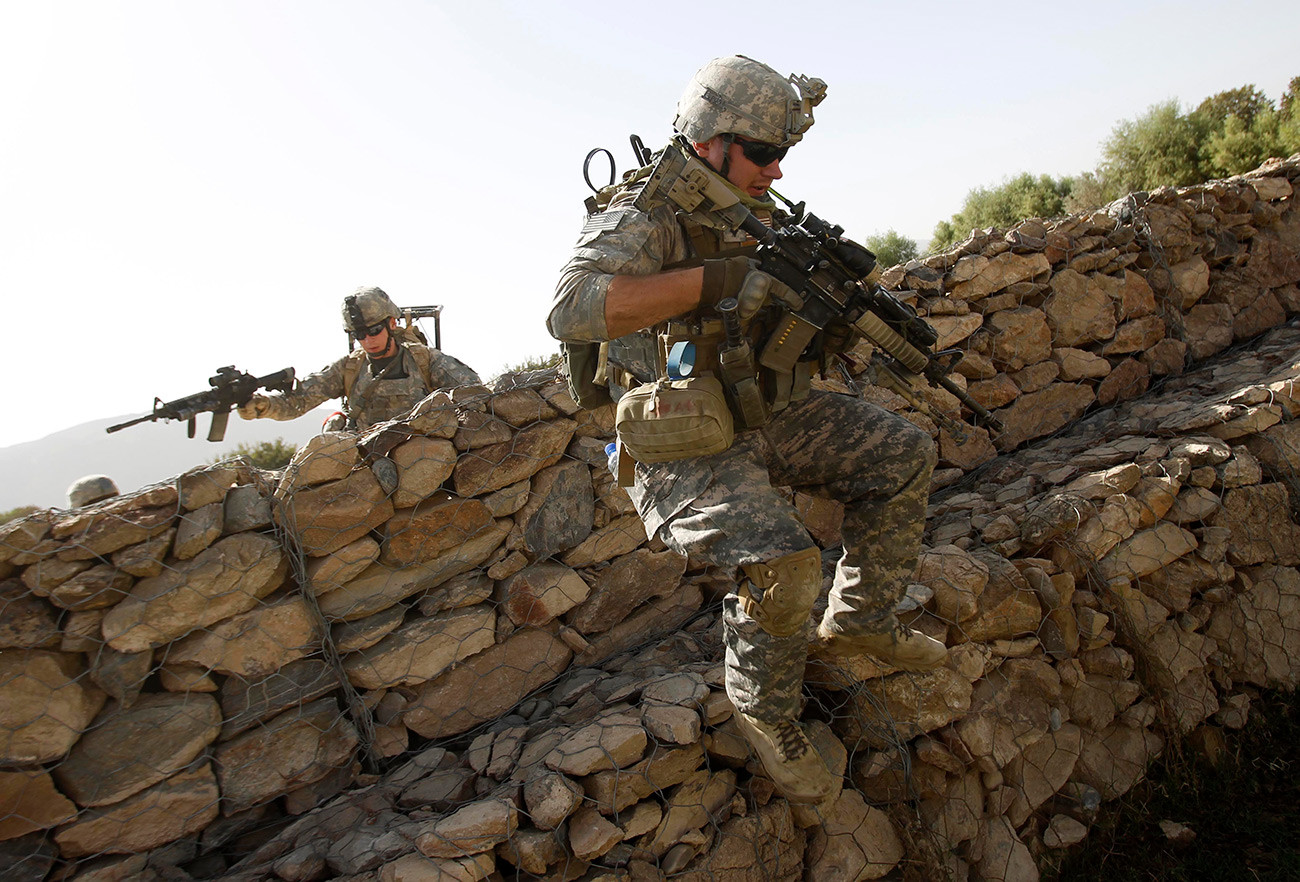 order to earn the right to become an elite US Delta Force officer a candidate has to endure numerous selection procedures that are created to test how physically and mentally he or she is prepared to go through all the upcoming hardships of the current military service in war zones.

So the main focus of the Delta Force training camps is to “break you in order to make you stronger”. Delta Force has a very limited number of positions for candidates. So the training and selection process is not only about overcoming physical pain, but also about being stronger and better than the rest.

The course begins with testing candidates’ physical fitness. You have to do a number of physical exercises: run two miles within time limit, swim 100 meters fully clothed and do a number of pull-ups, push-ups, sit-ups, and crunches).

There is short recovery time after each challenge because, as with the crimson beret tests in the Russian army, the point of this test is not only to test your strength and but also to push your body to the limit, even when it’s about to break. Officers bark at you, screaming that “a piece of shit like you should have stayed at your mama’s house”, they make you run and do exercises faster and faster. These procedures make your blood pressure and heartbeats run so fast you’re about to pass out. 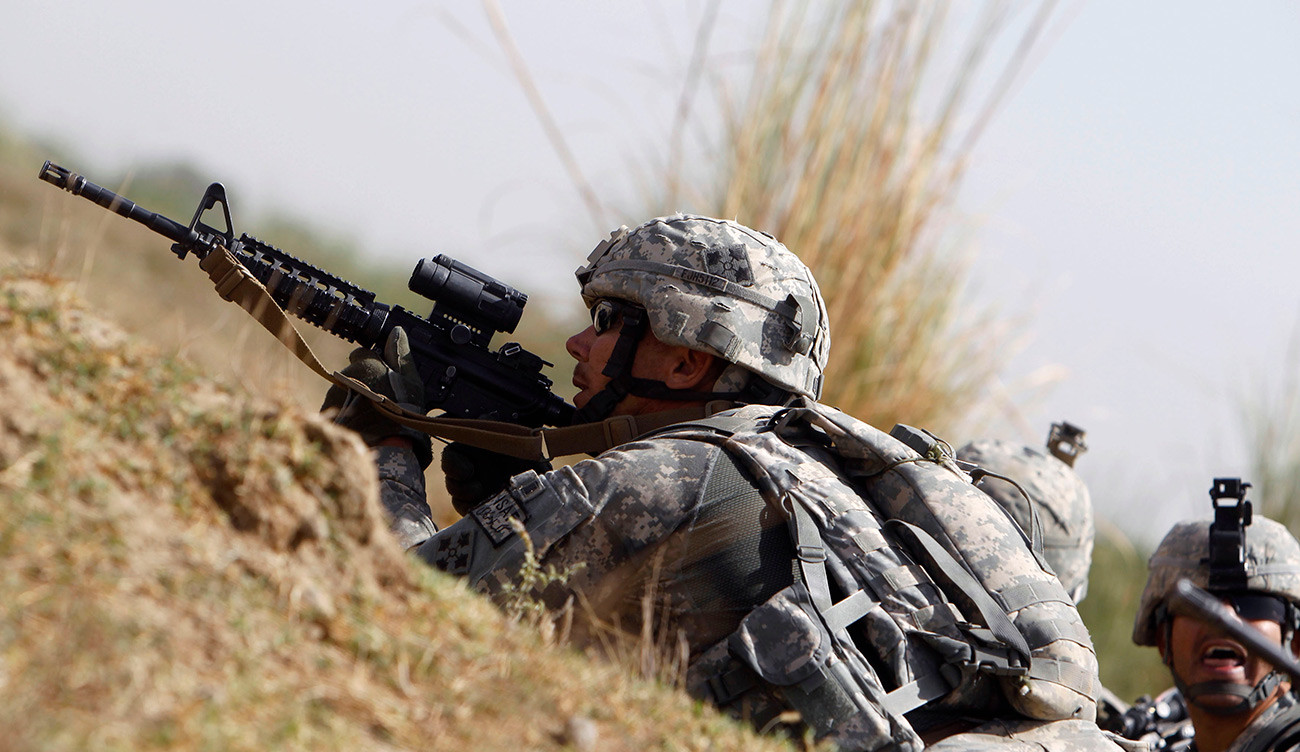 If a candidate successfully completes the first stage, they’re taken to a series of land navigation courses. They are similar to the ones British SAS candidates have to pass. Candidates are taken in the middle of the night to unknown terrain and have to walk 18 miles back to their base while carrying a 40 lb. (18 kg) backpack. These tests also have a time limit and if you exceed it - you’re out and all the hard work counts for nothing.

Once this navigation stage is complete candidates go to their final ‘pre-training’ challenge: a 40 mile run over extremely challenging terrain, this time with a 45 lb. (20 kg) backpack.

The exact time limits for each exercise are not known as they are kept secret and known only by the Delta command and officers in charge of the selection procedure.

If a candidate successfully passes all these stages they are taken for mental and physiological tests to determine how a person will behave in a dangerous environment and under fire in war zones.

Candidates who manage to successfully pass all these tests are finally sent on Operator Training Courses. These are intense training systems that last six months or even more to prepare a person for actual operations on foreign soil. These courses include firearms , seek-and-destroy type of operations, rescue missions, demolition and breaches courses, advanced navigation courses . During this training course, future operatives are asked to maintain little to no contact with their friends and relatives, as most of their skills will be used for classified future operations on foreign soil.

To sum it up, Delta Force officers that surpass all these selection procedures and training courses become some of the most elite Spec Ops units in the world.

So which test is more badass in your opinion? Rush to the comments to have your say!