Who was the man behind Pavlov’s Dog? 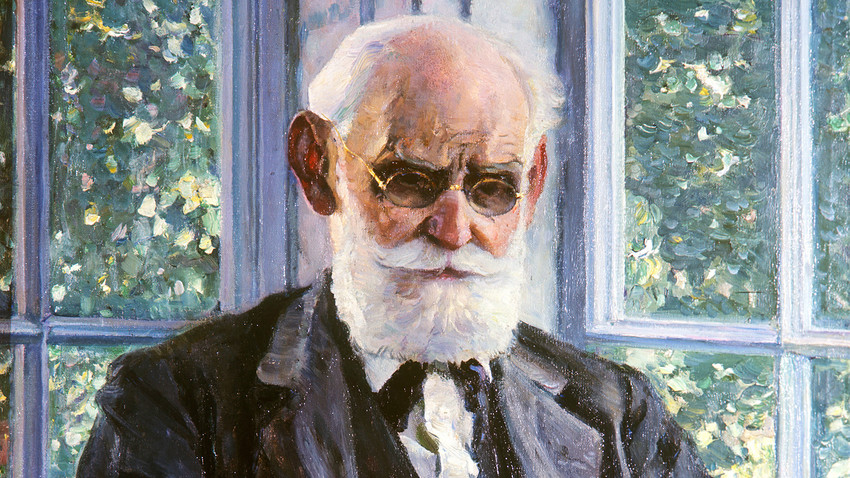 A. Sverdlov/Sputnik
Ivan Pavlov might be Russia’s most famous scientist, but for most foreigners he lives in the shadow of his famous experiments with dogs. But who was Pavlov, and what else did he contribute to the history of science?

I’m told that the denizens of Koltushi, nestled just twenty kilometers outside St. Petersburg, are little aware of who planted the trees in the town’s beloved park. I’m there on a Saturday, and many are taking a stroll with family or friends. My guide, Irina Aktuganova, continues that not many would know that the wooden buildings scattered through the greenery form part of the region’s UNESCO-protected heritage, an extended monument to Russia’s most famous scientist and first Nobel Laureate: Ivan Petrovich Pavlov.

A man in the shadow of his dogs

When foreigners think of Ivan Pavlov, they’re more likely to think of his experiments with dogs than the parks he cultivated. In fact, they might not even think about the man at all – a strange fate for a scientist whose name appears in high school textbooks the world over. Little is mentioned of the pond where the aging researcher would swim every morning, or the banya where he’d invite guests for a good sweat, or about the beloved bicycle he bought in Sweden before Lenin’s revolution. Or how he survived the revolution, for that matter. 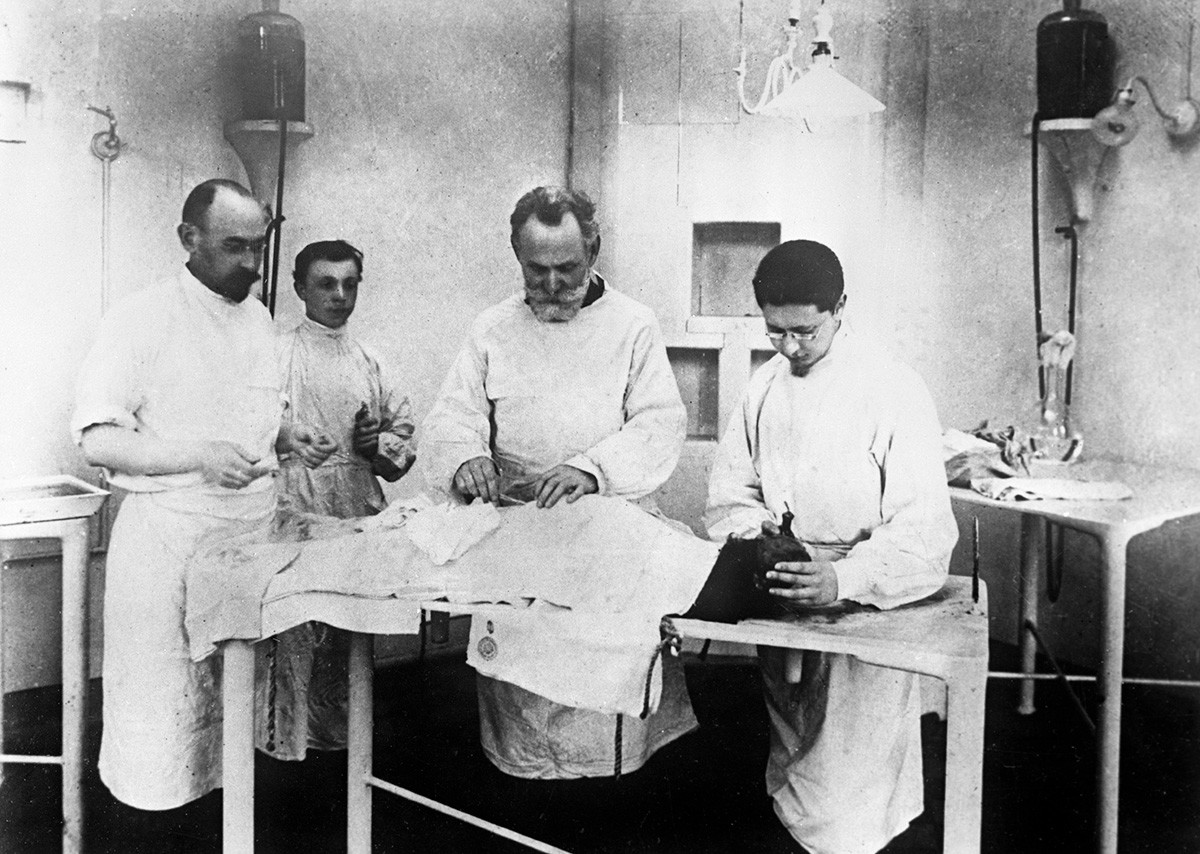 I had no idea before coming to Koltushi that the same hands that rang bells for dogs also cultivated whole orchards of apple trees, or that young chimpanzees used to clamor here between the trees and busts of scientists like Decartes, Mendel or Sechenov. Aktuganova, the curator of a new permanent exhibition of art and science located in the basement of Pavlov’s historical lab, shares that it was the scientist himself who developed this land from a loose hamlet, once inhabited by the Finnish diaspora, into the country’s first official academic village.

From a late bloomer to a Nobel Prize winner

Born in 1849 in what was still the Russian Empire, Pavlov was the eldest of eleven children raised by a Russian orthodox priest and his wife. Due to an early injury as a child, he was unable to start school until he was eleven years old. Despite this, he showed a high degree of intelligence and academic potential – he was reading independently by the age of seven, and after switching from theology to physiology (moving his studies from Ryazan to St. Petersburg in order to do so) he won prestigious awards while still an undergraduate. 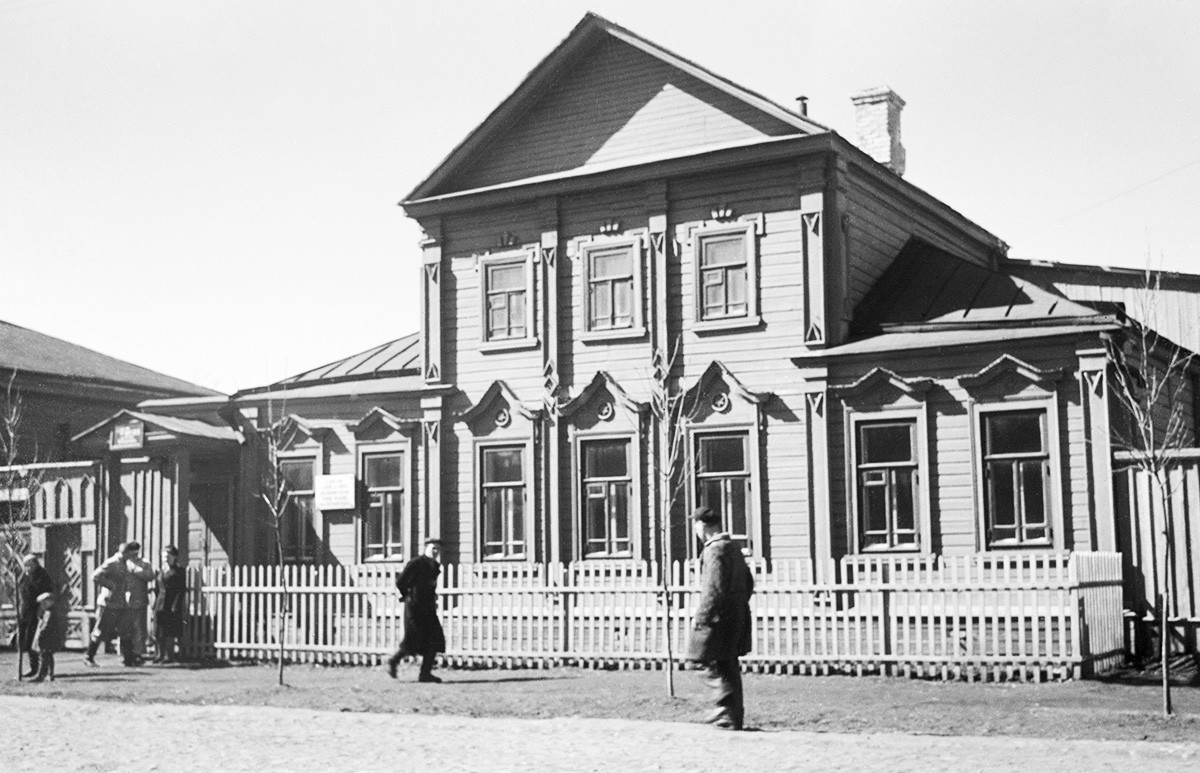 His greatest award, though, was yet to come. After leaving for a stint in Germany to receive his doctorate, he returned to St. Petersburg and was eventually invited to organize the Department of Physiology at the Institute of Experimental Medicine there in 1891, which he would go on to transform into a global center for physiological research. He was nominated for the Nobel Prize in Physiology or Medicine every year after 1901 until winning it in 1904, not for his work with dogs, but “in recognition of his work on the physiology of digestion, through which knowledge on vital aspects of the subject has been transformed and enlarged.”

It was on this base, however, that his most famous experiment would be made possible.

The “conditioned reflexes” Pavlov is known for refers to how any organism with a sufficiently developed nervous system can develop special reflexes in response to its environment. To discover this, Pavlov designed soundproof chambers for the dogs to be kept in, where the only stimulus would be some food or the sound of a bell. The bell would be rung before the dog was given meat, and so the animals eventually learned to associate the bell with being fed. Using his experience with the digestive system, Pavlov was able to measure the dogs’ saliva levels to confirm that, yes, their glands would eventually produce saliva in response to the bell instead of to the sight or smell of food. 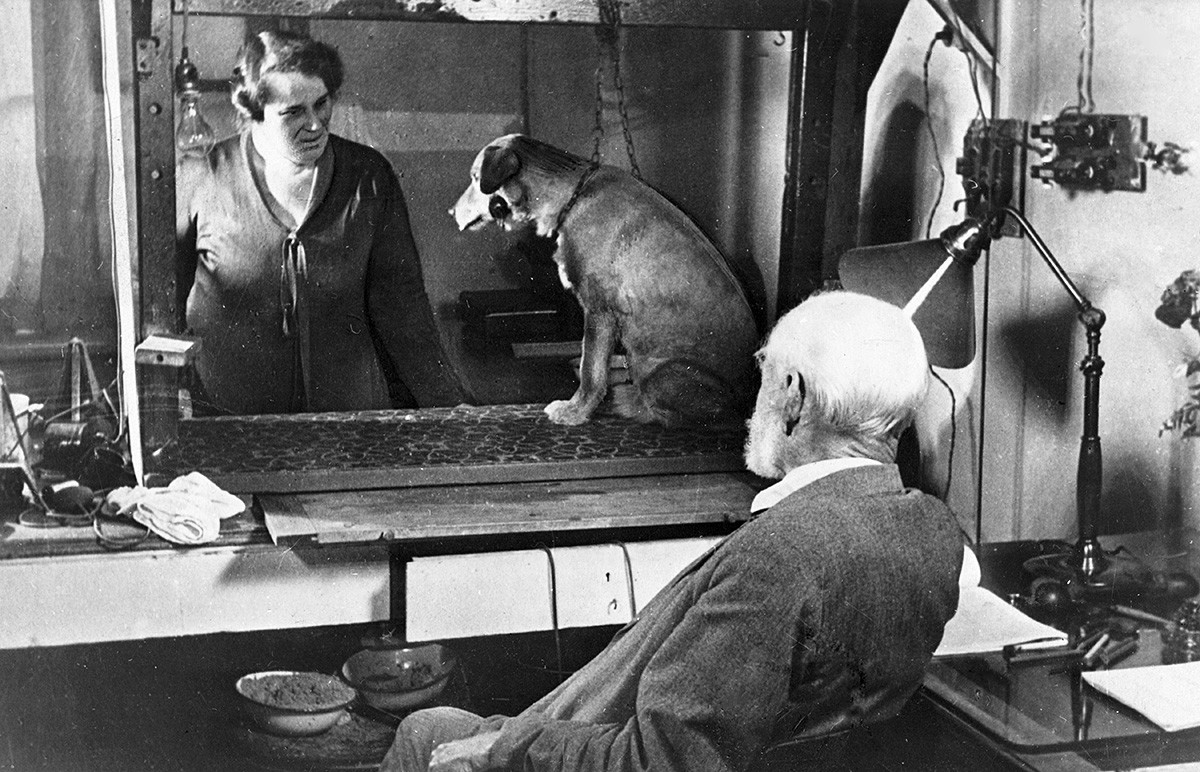 Ivan Pavlov watching an experiment with a dog, summer 1934

It was this discovery that led to his becoming a household name. Curiosity, combined with the mystery associated with his experiments, led to his laboratory complex being named the ‘Tower of Silence’. It was located in the center of the old imperial capital, on Petrogradsky island, but the forces of history wouldn’t necessarily give Pavlov the silence he was looking for. The outbreak of World War I, and the revolution that followed, turned the city into a chaotic scene of disorder and violence.

While Pavlov was open in his criticism of Soviet ideology, his work earned him the respect of none other than Vladimir Lenin. “He couldn’t work in disorder,” Aktuganova tells me, “and so, Pavlov wrote Lenin a letter that said ‘give me a place to work in peace, or I’ll emigrate.’” The plan worked, and the scientist received approximately one million rubles worth of gold to relocate his laboratory. With it he chose Koltushi.

He built a complex for experimental medicine and surrounded it with what became Russia’s first scientific village. This included his lab, a house (that he rarely used), a complex that included a hotel, cafeteria and club, five cottages for workers and, of course, kennels for the dogs, chimpanzees and other animals he worked with. This formed the core of a set of buildings that eventually expanded with the years, until it became a functional suburb of the ever-growing Leningrad (known now as St. Petersburg).

“To look at the place now,” Aktuganova tells me, “you wouldn’t think that a world-famous figure used to live here. With the UNESCO status, there should be more tourists and more infrastructure to support them [visiting].”

But remembering Pavlov and his contributions wasn’t on the highest list of national priorities – after his death from pneumonia in 1936, support for the village continued until perestroika in the 1980s. A greater focus was then given to the humanities, which had faced various pressures over the past half century, and money typically invested in the hard sciences was redirected. 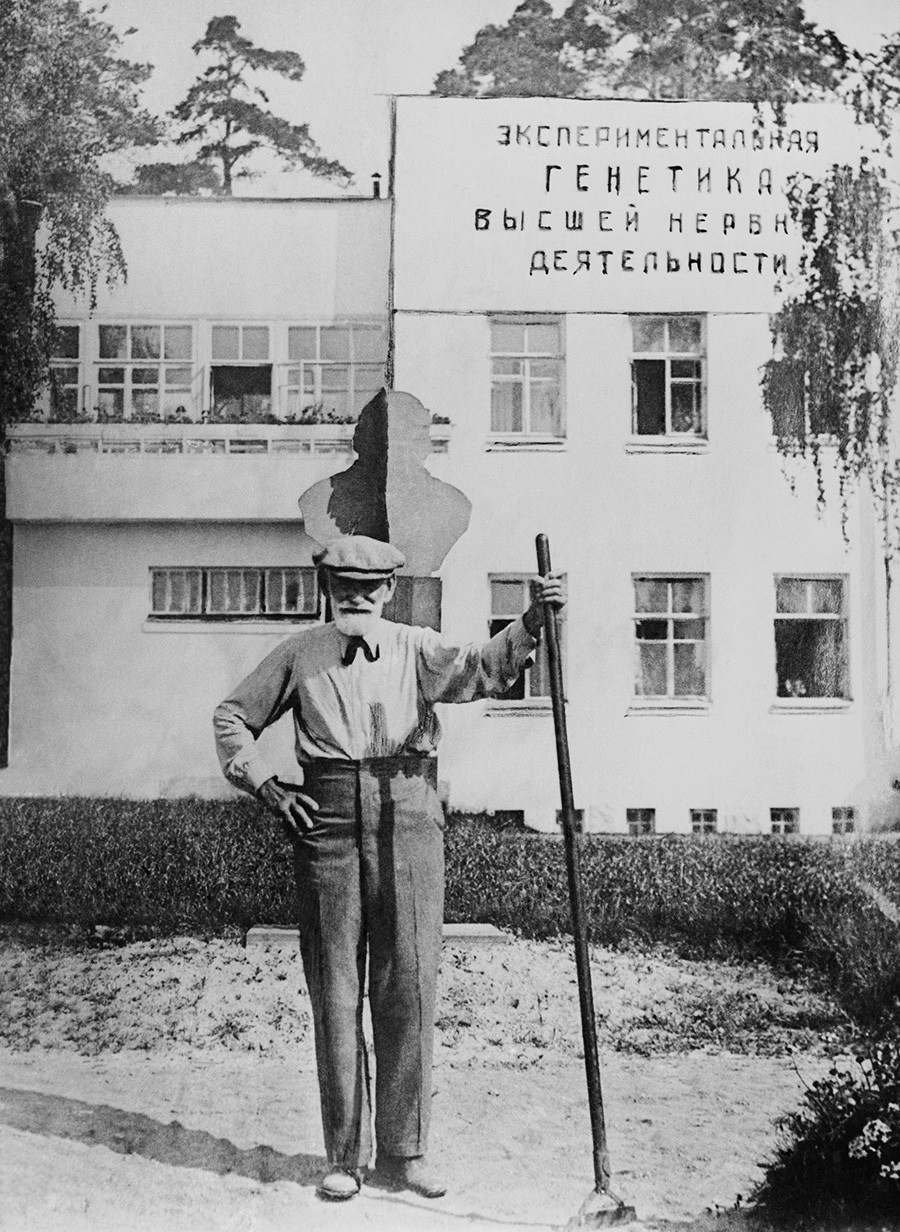 That said, a museum still exists here that tells of how Pavlov lived out the last years of his life. There are pictures of him with his wife Serafima, or Sara for short, and their children (two of which sadly died while Pavlov was still alive). Alongside them are photos of international visitors like Niels Bohr and H.G. Wells. Photos with famous local artists, like Ilya Repin, can also be found, confirming the age Pavlov lived in, as a time when art and science were not necessarily competitors. The permanent exhibition in the basement, a collaboration between young artists and scientists, seeks to revitalize this tradition. 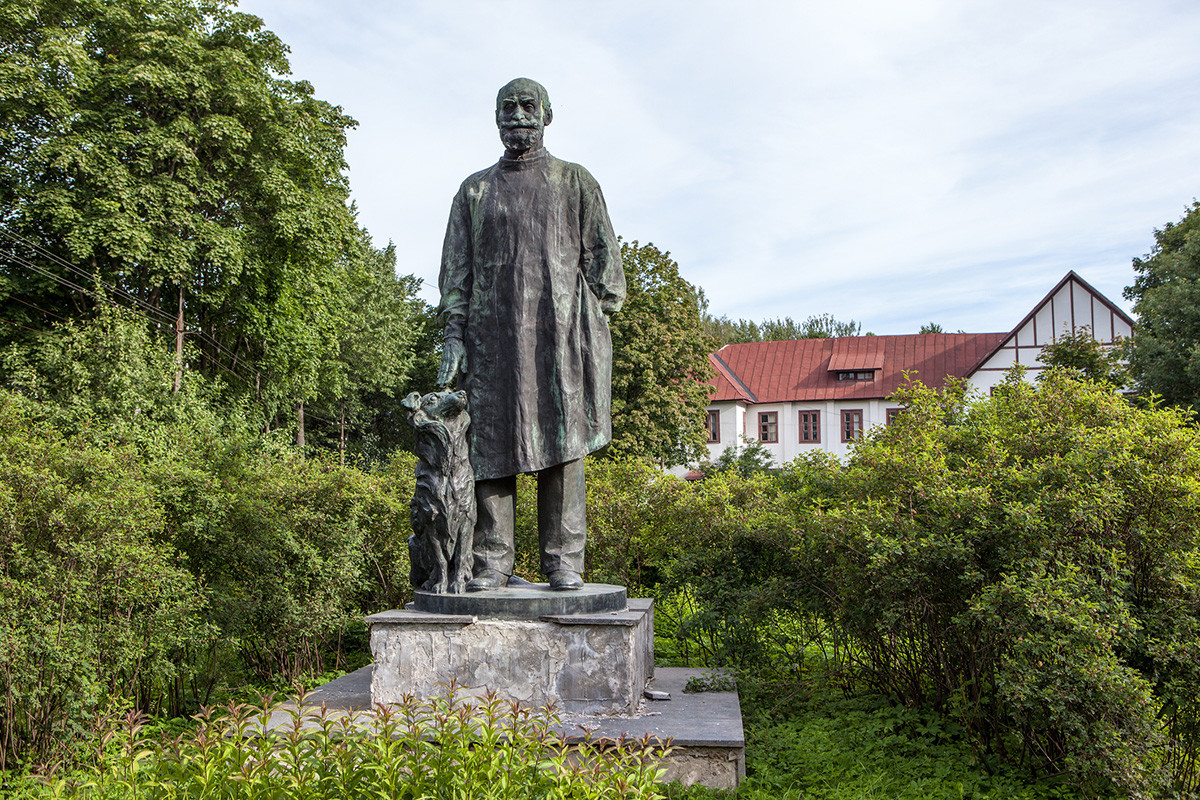 Monument to Pavlov and his dog in Koltushi

Asteroids, lunar craters and scientific principles have since been named after him, but it’s become all too easy to hear about Pavlov without knowing anything about the man himself. That said, these buildings, much like his famous dogs, stand as a legacy that won’t soon be forgotten. What remains is a testament to a remarkable scientist who changed the way we think about our behavior, our desires and the other secrets still locked inside our brains.