All about the Russian Spy Ship that nearly crashed into an U.S. Navy destroyer 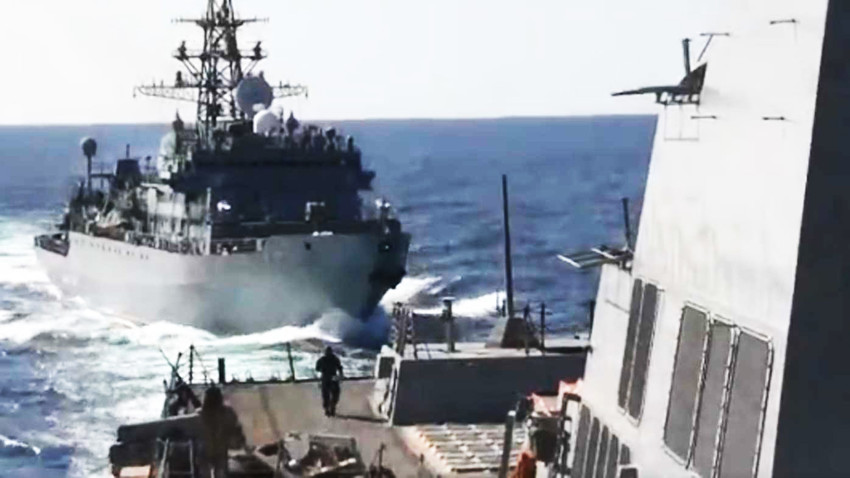 U.S. Navy
The ”accident” could have easily turned into another unnecessary flare up between the two countries.

Russian and U.S. ships narrowly avoided a collision in the Arabian Sea in early January, according to the U.S. Navy's Fifth Fleet.

Shortly after the ships avoided collision, Farragut’s captain ordered to sound “five short blasts, the international maritime signal for danger of a collision, and requested the Russian ship alter course in accordance with international rules of the road,” Fifth Fleet said in a statement.

Right after that, the Russian ship changed its course, thus increasing the distance and avoiding any accident. Yet, Russian officials believe there was no collision threat and that the professional actions of the country's sailors prevented the crash that later turned into a new political dilemma.

What is the ‘Ivan Khurst’?

Ships from ‘Project 18280’ have little to no arms on board, other than light anti-aircraft weapons, thus making it no military threat to a U.S. destroyer (or any other vessel).

The ‘Ivan Khurst’ is a reconnaissance ship built to be the first in line to gather information on all communications and missile launches in war-torn areas of Syria, where the Russian military is still conducting operations against ISIS forces.

It also provides all the information gathered on movements of enemy forces’ in the region to the command centers.

‘Ivan Khurst’ is a next-gen ship with the latest Russian hi-tech systems and equipment on board created to replace similar, but outdated, vessels of the Soviet era. The new ship has a displacement of more than 4,000 tons and capable of covering up to 13,000 km (8,000 mi.) without refuelling and/or having to dock.