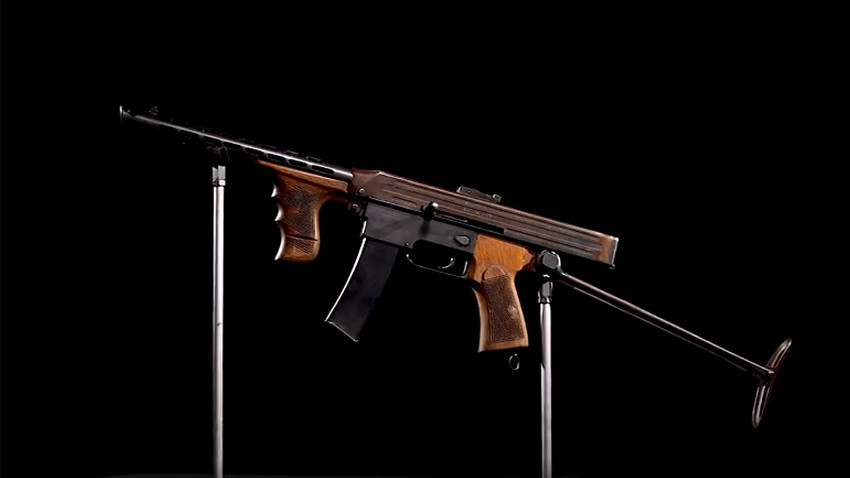 Kalashnikov Media
Before the AK-47, Mikhail Kalashnikov created a submachine gun that nearly ended up in the hands of every tank crew in the Soviet Union.

In 1942, the future world-famous arms designer and then tank sergeant Mikhail Kalashnikov was wounded and hospitalized, after which he was unable to return to frontline action against Nazi Germany.

Lying in his hospital bed, Kalashnikov began working on first weapon, which he believed the Soviet army needed — a new compact submachine gun for tank crews.

The young engineer took his sketches and blueprints to an arms factory in Tashkent, Uzbekistan, where he was able to develop the first prototype of a small-sized weapon with folding buttstock, similar to the German MP38-40 submachine gun.

Kalashnikov’s weapon borrowed the small-capacity 25-round magazine from the most widely used pistol at that time, the Degtyarev light machine gun, and was given a front handle to improve its ergonomics.

“Kalashnikov was convinced that tank crews needed such a submachine gun because they were completely at the mercy of enemy automatic rifles once their armored monster had been destroyed. Armed with a new compact weapon, tank crews would feel more confident engaging the German invaders at distances of 50 meters,” says Vadim Kozyulin, professor at the Russian Academy of Military Sciences.

The weapon's fate is decided

After tests in Tashkent, in February 1943 Kalashnikov headed to Moscow for state trials of his invention by the Russian Ministry of Defense.

“The weapon displayed average results: it suffered from hang fires and jammed several times during combat tests. In the end, it lost out to the Shagin and Sudaev machine guns, two high-tech automatic weapons for that time, made by eminent designers who the military had worked with for many years,” added Kozyulin.

As a result, the Sudayev submachine gun was selected as the army’s wartime weapon, but Kalashnikov himself at least gained recognition in army circles.

After 1943, he was sent to an arms factory in Izhevsk, where he began work on a new assault rifle for the Soviet army, which would go down in history as the AK-47.

For details of the AK-47 and Kalashnikov’s collaboration with German engineers in Izhevsk, see our separate article.