How Siberian geneticists domesticated the FOX 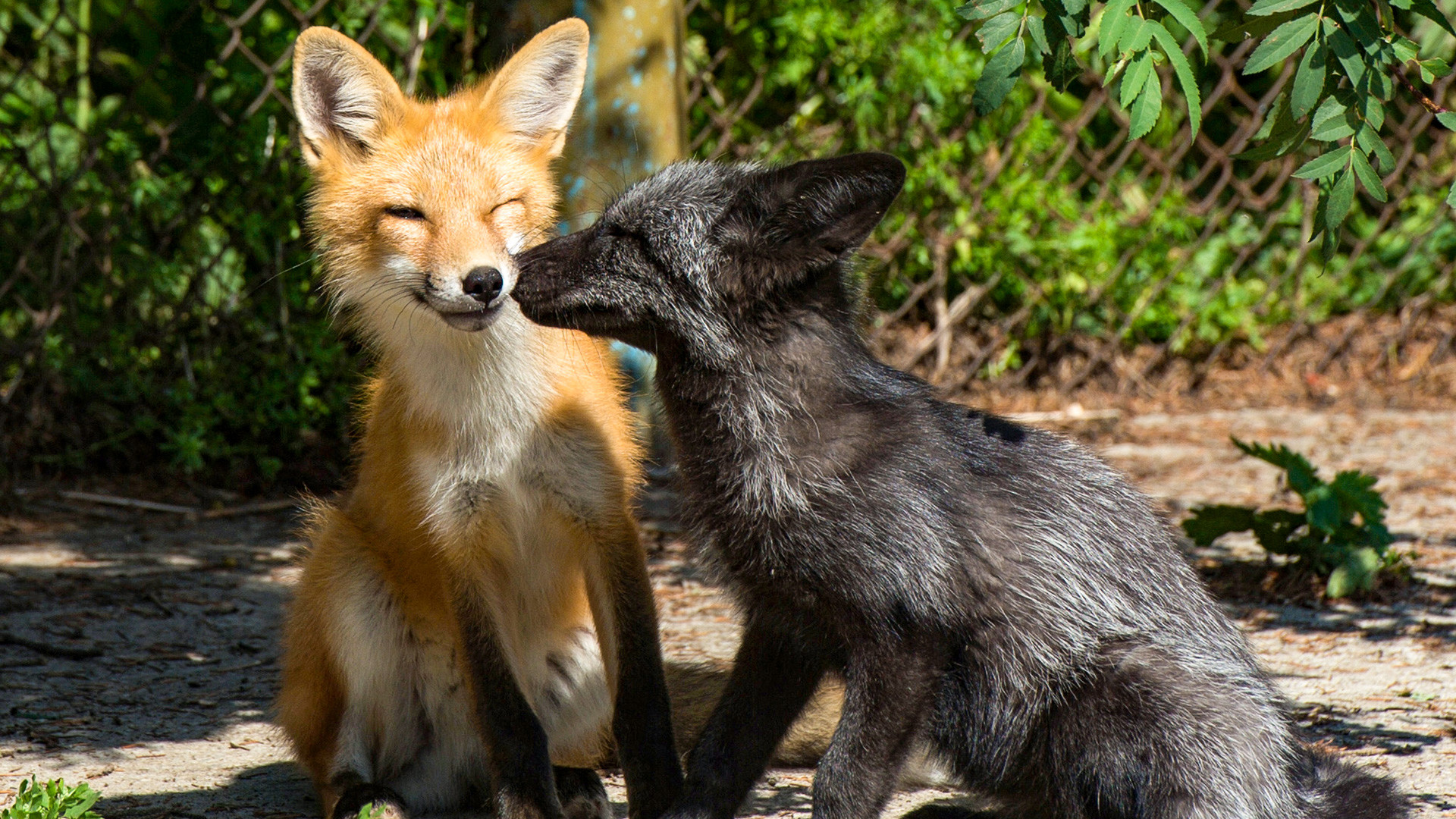 Tame foxes are seen here in the enclosure on the experimental farm of the Institute for Cytology and Genetics of the Russian Academy of Sciences Siberian Branch.

Gerda the fox is a favorite among both children and adults in Novosibirsk. She adores playing with tennis balls and having her ears stroked, and loves falling asleep next to her human. “Gerda and I have been together for almost three years now,” says Andrei Kudyakov. 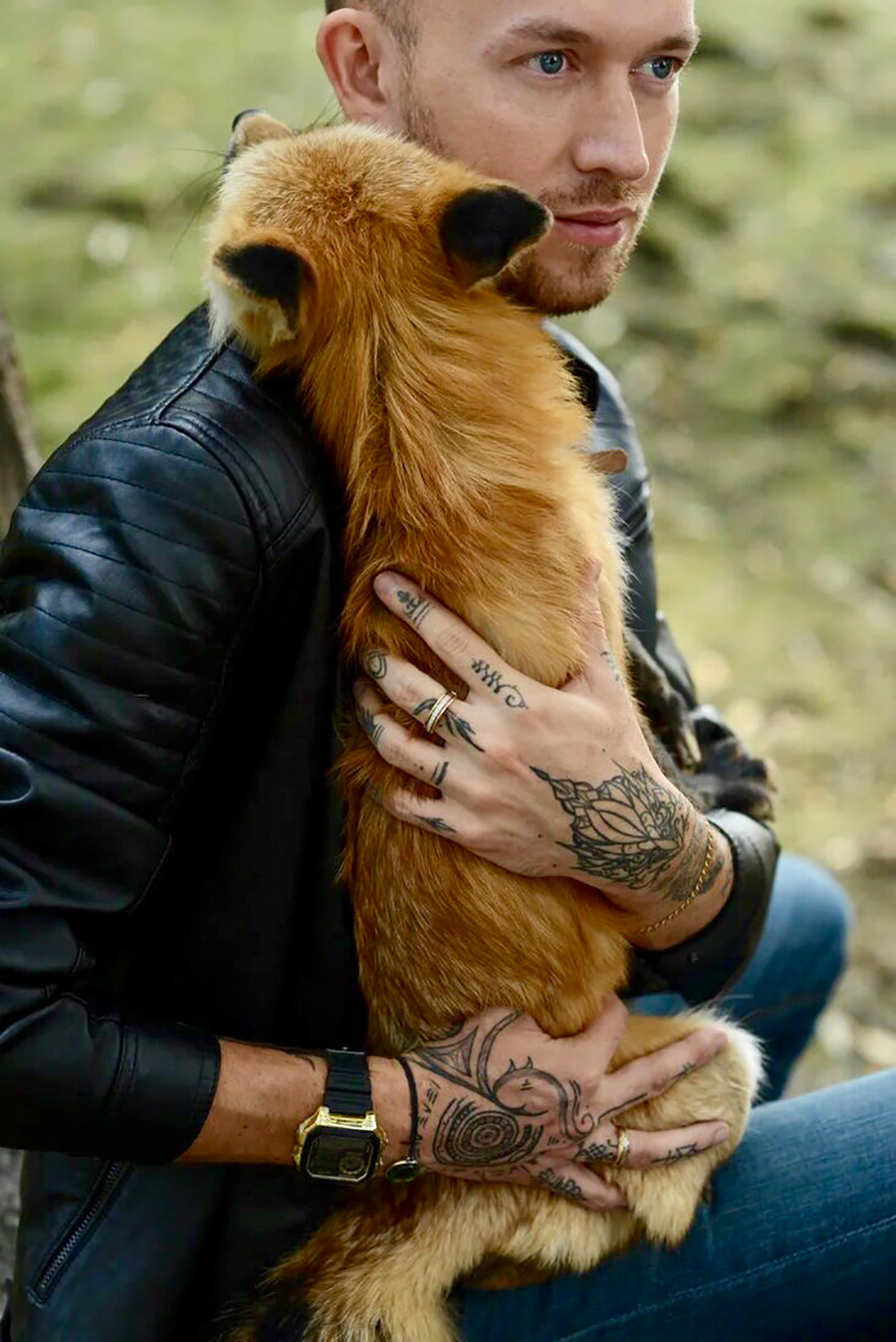 “One day, I visited the Institute of Cytology and Genetics farm to look at their foxes out of curiosity. And afterwards, I could not get the idea of having such a lovely creature at home out of my head. A year later, I went back and made my choice in favour of the reddest one.” Gerda lives outside the city, in the countryside, where she has a spacious enclosure outdoors and, when she goes for a walk with Andrei, she wears a harness, attracting the attention of everyone in the neighborhood. By nature she is cheerful, alert, curious and affectionate. 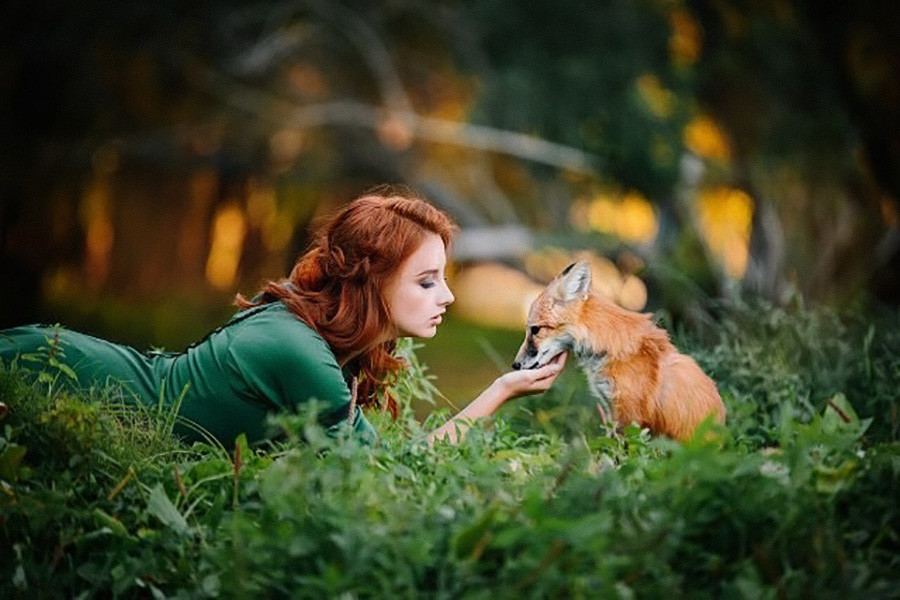 Gerda with her friend.

Gerda is one of the domesticated foxes bred at the Institute of Cytology and Genetics of the Siberian branch of the Russian Academy of Sciences. She is attached to humans at the genetic level and regards them as her friends. This breed of foxes is an inherently unique phenomenon.

The experiment to domesticate foxes was initiated by Academician Dmitry Belyayev in 1959. In the 1970s, he was joined by Lyudmila Trut, then a biology student at MGU (Moscow State University) and now a world-renowned Russian scientist.

Lyudmila Trut and American biologist Lee Alan Dugatkin co-authored a book in 2019 about her work with Belyayev titled How to Tame a Fox (and Build a Dog). According to the book, Belyayev believed that the experiments could also shed light on human evolutionary processes - he proposed that humans were “self-domesticated” apes that had gone through selection for reduced aggression (social tolerance) towards their fellow creatures. 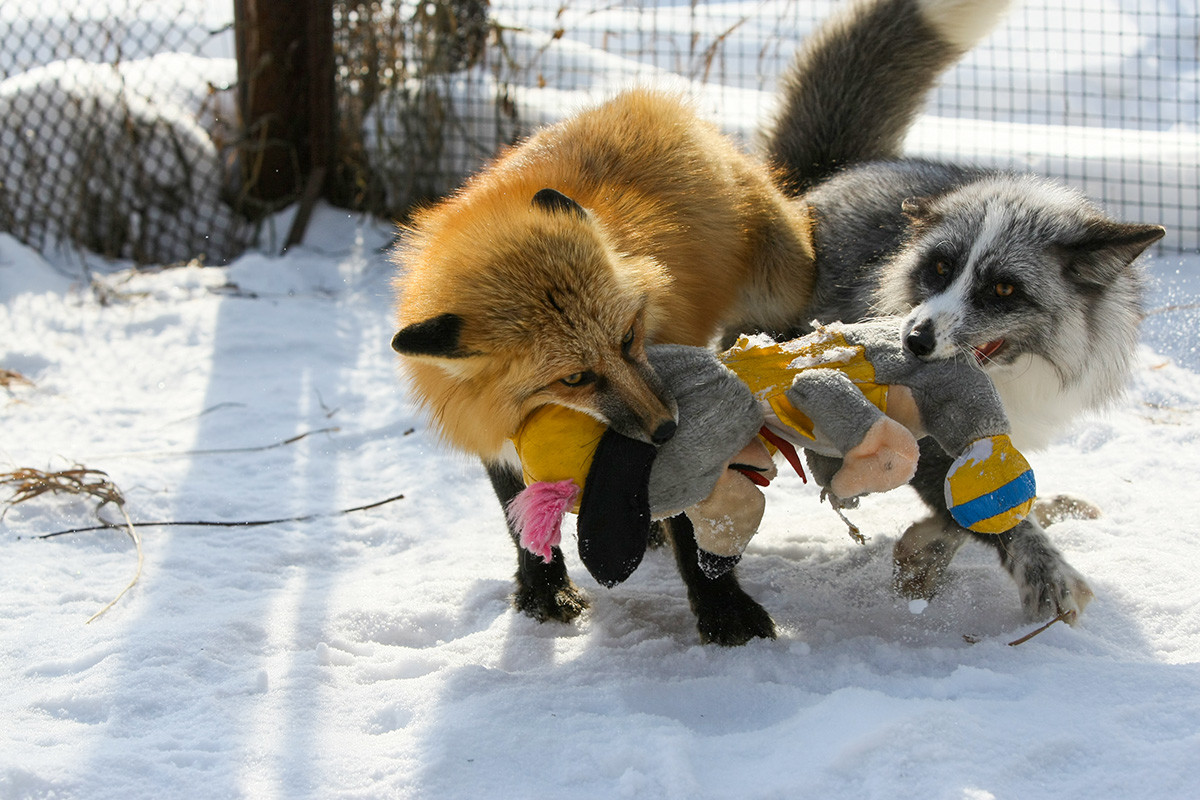 Foxes play at the experimental farm at the Institute of Cytology and Genetics of the Russian Academy of Sciences.

The scientist supposed that the least aggressive individuals were the first to start approaching people, obtaining a selective advantage from their contact with humans in the form of warmth and food, and so, as generation followed generation, they would become domesticated. Wild aurochs became domesticated cows, while ferocious wolves - loyal dogs. It may sound reasonably simple, but in practice, evolutionary processes do not take place so quickly or smoothly. Man can tame many wild animals (bears, cougars, cheetahs - and the people who acquire such pets today frequently become social media stars), but for them to become actual domestic animals - in other words, breed regularly and regard human dwellings as their home - thousands of years of evolution have to go by. However, Soviet scientists needed just 60 years. The idea was to breed animals, by means of selective screening, that from a young age would behave like domestic animals.

“When we set out on the experiment, we sought an animal similar to a dog,” Lyudmila Trut says. “And that was the fox, which at that point had already been bred for dozens of years at Soviet fur farms - in other words, it had already gone through a stage of reproduction under human control and this helped us significantly shorten the timescale of the experiment.” 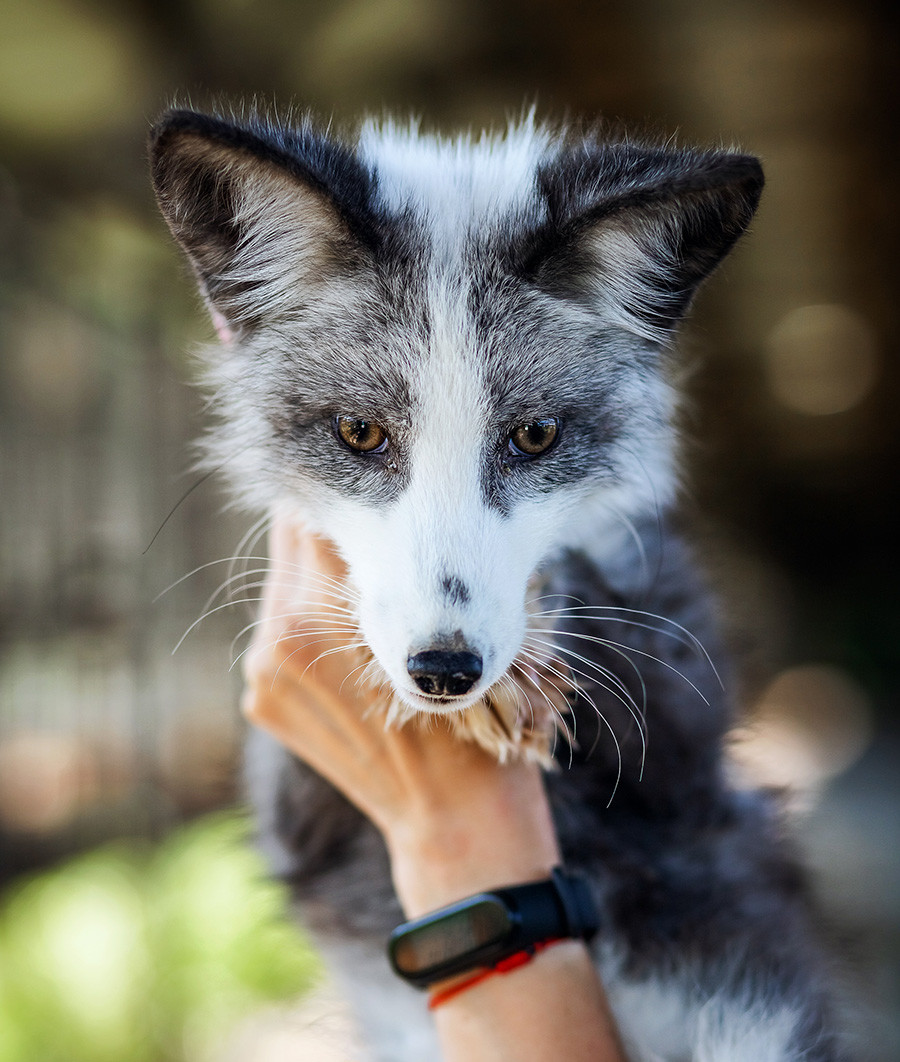 Institute of Cytology and Genetics

The foxes that were mainly bred then were silver foxes imported from Canada in the 1920s. They behaved very aggressively: They would attack humans and viciously bite them, and the fur farms were consequently very surprised at Belyayev’s proposal. “We singled out the foxes that did not manifest a strongly-pronounced ferocity towards humans and were more or less tolerant of humans - and these were isolated cases at our fur farms,” Trut says. Subsequently the chosen foxes were settled at a farm not far from Akademgorodok in Novosibirsk. The first results began to emerge four years later.

The first fox cub that started wagging its tail when a human approached was born in 1963. In subsequent generations, the foxes started licking people’s hands and asking to be stroked or to have their belly rubbed. Then they started accepting eye-to-eye contact, which in nature is regarded as an overt act of aggression. In 1975, the first fox gave birth to a litter while living alongside humans, and then started giving out a cry like a dog’s bark. In the course of domestication, the Belyaev foxes developed markings in the form of ‘stars’, their tail and ears curled and their muzzle began to preserve a juvenile appearance even in adult age. Domestic foxes retain a fairly specific odor from their wild ancestors, but the danger of their biting or behaving aggressively is practically non-existent, scientists believe. 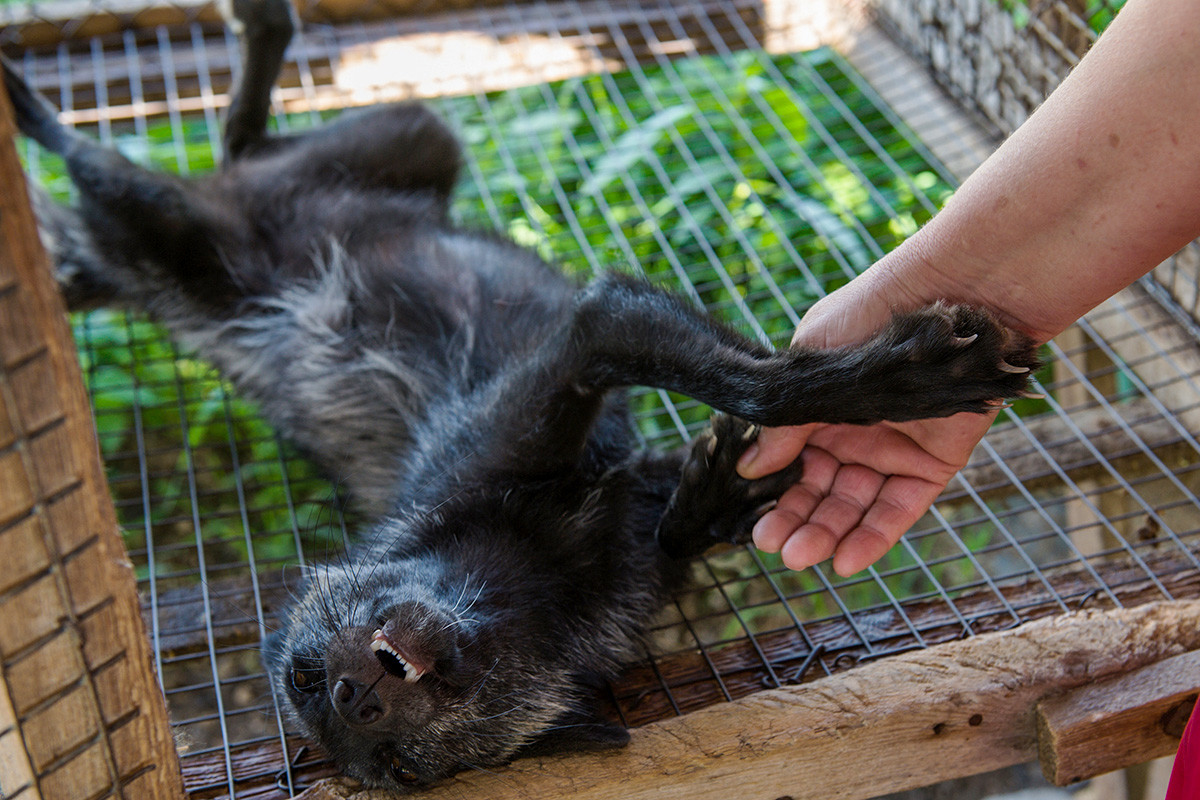 A keeper plays with a tame fox at the farm of the Institute of Cytology and Genetics.

Today, the followers of Dmitry Belyayev are studying the domestication of animals all over the world. Lyudmila Trut continues her research at the Institute of Cytology and Genetics - after all, 60 years is a brief moment in evolutionary terms, and a large number of unanswered questions remain. Can domestic foxes be born if an aggressive fox mates with a tame one? Or why do the Belyayev foxes change appearance in one way and not another? 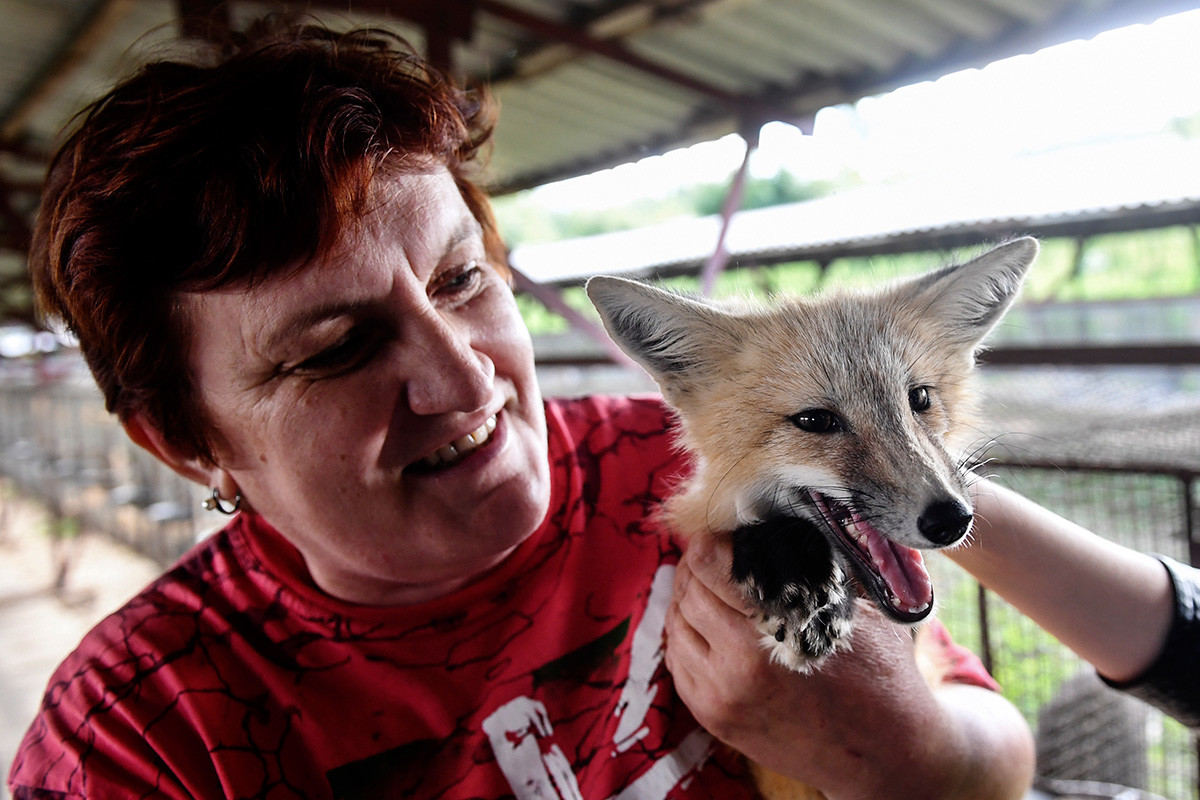 An employee holds a domesticated fox seen in an enclosure at an experimental farm of the Institute of Cytology and Genetics.

“Our experiment in Novosibirsk has created a completely new fox, one that never existed before. People buy them from us and take them all over the world,” Lyudmila Trut says. She says that no research into the domestication of foxes of this kind has taken place anywhere else in the world - Russian scientists have carried out scientific work on an industrial scale in the world’s largest country. She estimates that over these years they have bred more than 60,000 foxes with a friendly disposition towards humans. “Of course, not all these foxes were kept at the institute. We had outstations, as it were, at fur farms throughout the country, but the domestic fox was developed on our experimental farm at Akademgorodok.”