Why did the Soviets send dogs into space, and not monkeys? 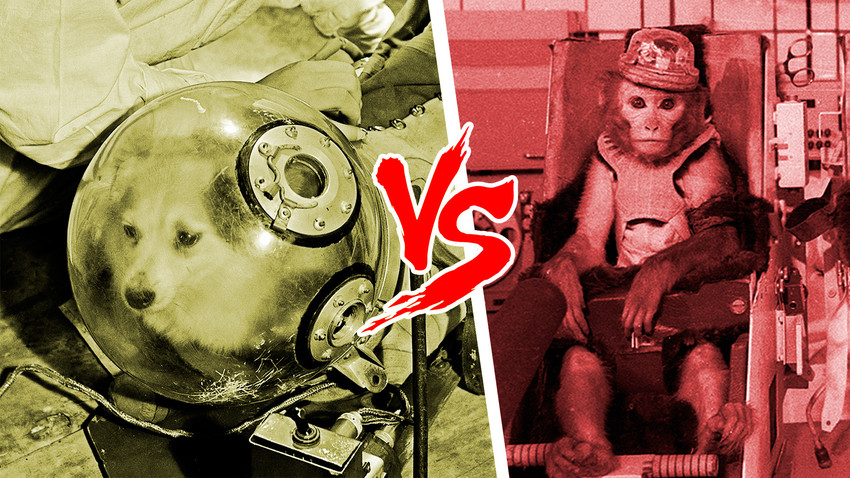 Lev Porter/TASS; Vladimir Rodionov/Sputnik
While the US chose monkeys for its space experiments, the USSR, after much chin-scratching, opted for dogs — but only strays could apply.

The experiments, intended to demonstrate whether manned space flight was possible, began in the USSR and the US at roughly the same time, in the 1940s-50s. Before then, not a single earthly creature had experienced takeoff or landing inside a space capsule, much less weightlessness and cosmic radiation.

The potential effects on the human body had to be tested on guinea pigs. But not literal guinea pigs, something a bit larger. But what? The question was not at all trivial.

Soviet scientists considered various options: mice, rats, monkeys, cats, dogs. Naturally, monkeys were considered the most human-like in many ways. For this very reason, the Americans chose Albert, a rhesus monkey, to fly aboard a rocket in 1948. The French, in 1963, sent a cat into space, and before that, rats. In the USSR, however, dogs had played a historical role in neurophysiological experiments — physiologist  Ivan Pavlov had famously used them to study the reflex system with Nobel-winning results. 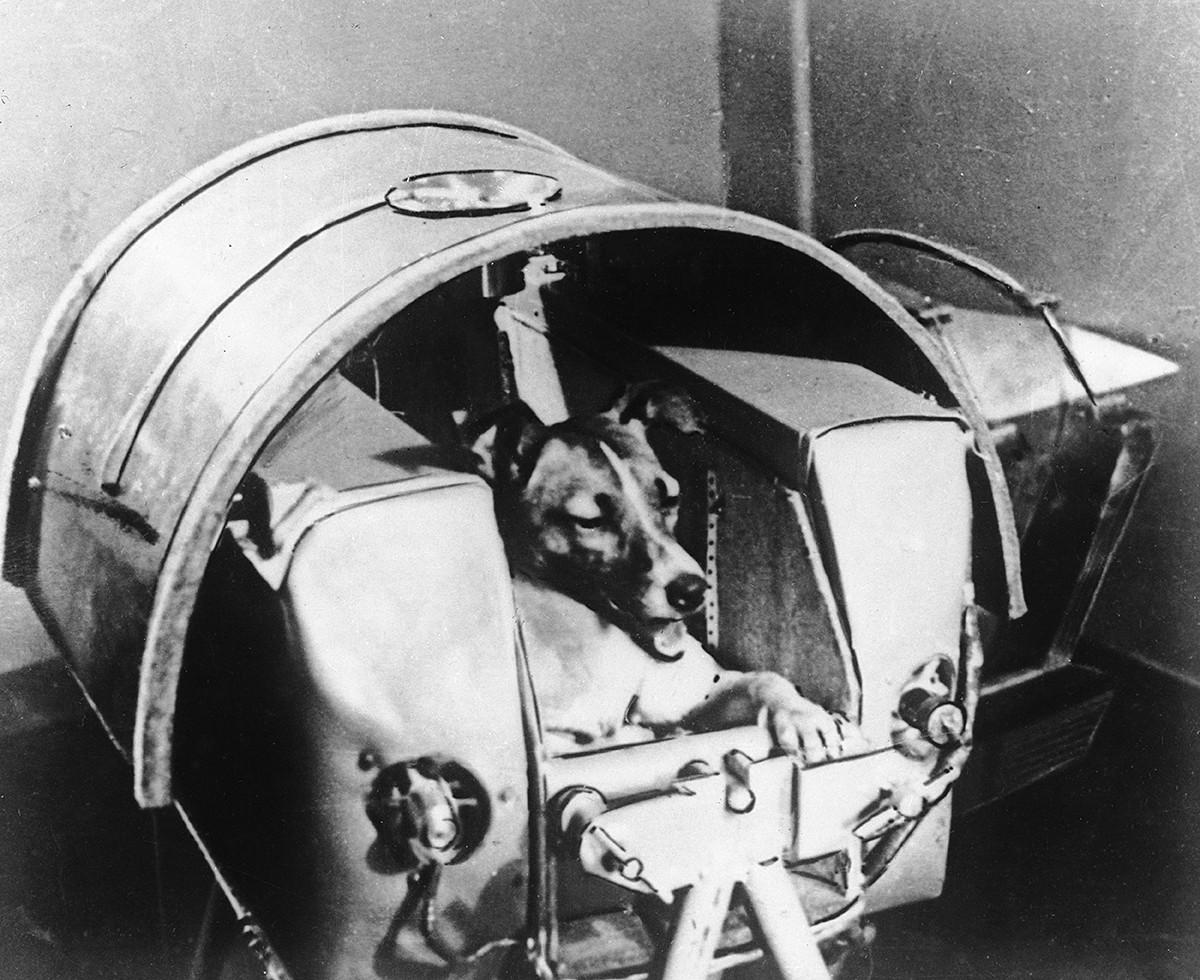 Dog Laika in the hermetic cabin before installation on the satellite in 1957.

That said, the primate option was popular with some. Dr Oleg Gazenko, one of the main scientists on the Soviet space program, even went to observe circus dogs and monkeys, and realized that there would be lots of problems with the latter. Monkeys are less emotionally stable (they are closer to humans, after all), suffer nervous breakdowns and then become aggressive. US scientists tackled this issue by drugging the animals. Anticipating trouble, the Soviets settled for dogs. Stray ones.

“Laika [the first dog in space] was found in the street, as were most of the dogs used in the experiments. Why mongrels? Because they are intelligent and undemanding. More than any pedigree, they value kindness when they receive it. Picked up in the street, they were cleaned, washed and fed to their heart’s content,” explained Gazenko. 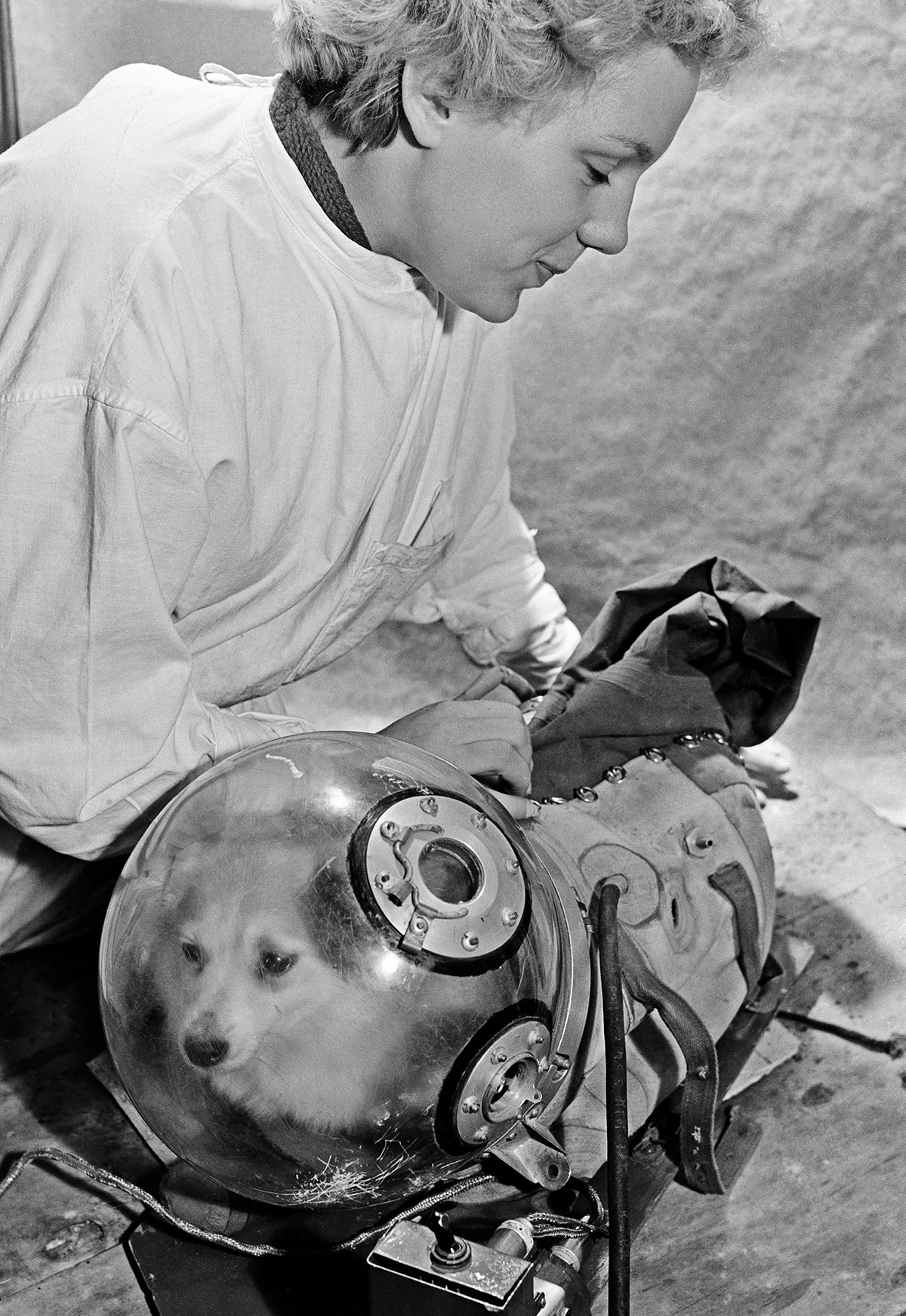 Suitable pooches were sought in rescue shelters or found in the street. They had to be quite small, weighing 6-7 kg, aged 2-6, friendly, healthy and very patient. Females were preferred, since it was easier to make sanitary garments for them (to remove bodily discharge), as was light fur, since such dogs were more telegenic. These were only preliminary requirements.

Barking up the right tree

The selection and training process for canines was just as rigorous as for the human cosmonauts who followed. A special scientific program was developed, consisting of several stages. First, the animals were trained and tested for endurance.

They were habituated to space suits: one for immobilization (attached to a corner to limit the dog’s movements inside the capsule) and one for bodily discharge. Plus, they were drilled in eating from an automatic feeder, rotating in a centrifuge, standing on a vibration stand, and ejecting. 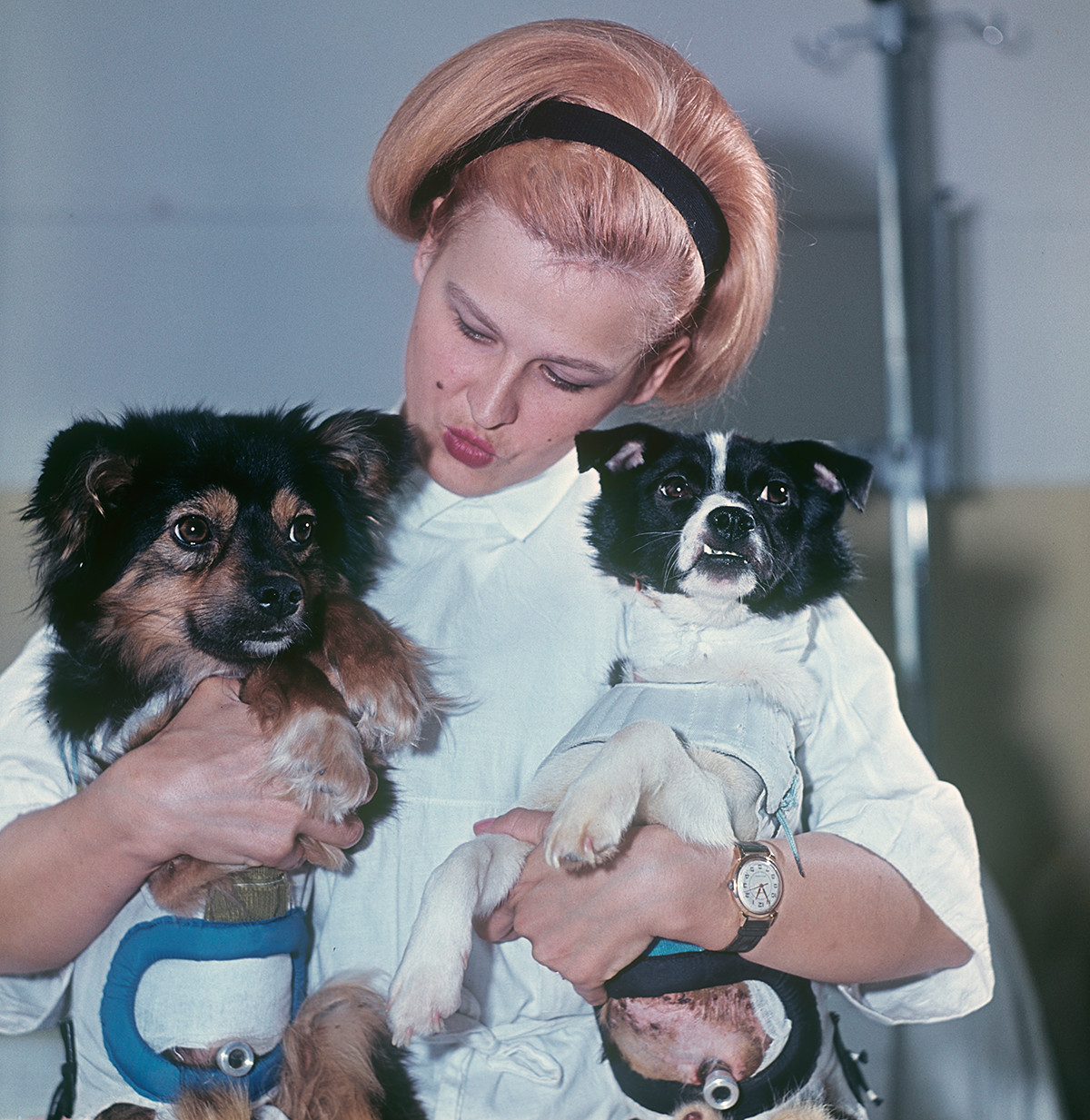 The most difficult test was having to remain inside the closed capsule, and the time was gradually increased as training progressed. Animals earmarked for long flights had to withstand up to 20 days in confinement, which was determined empirically; initially, these capsule experiments lasted up to 55 days. Needless to say, not all the dogs could withstand the stress; some whined incessantly and tried to knock down the door. It was believed that such experiments would reveal the character and psyche of the animal, and what kind of flight it was suitable for: short, long or neither. Those who passed the preliminary selection were then operated on (a rather risky stage in itself): electrodes and catheters were inserted to monitor health and administer drugs directly into the bloodstream, and their tails were docked (since they might interfere with the ventilation system inside the capsule).

The Soviets preferred to send dogs into space in pairs to make sure that the results obtained were not based on an individual reaction, and selected them according to psychological compatibility, another key factor.

In total, the USSR launched 51 dogs aboard rockets, 12 of which did not survive the flight. Laika’s death in 1957 was the most tragic, given the sheer scale and publicity of the event. 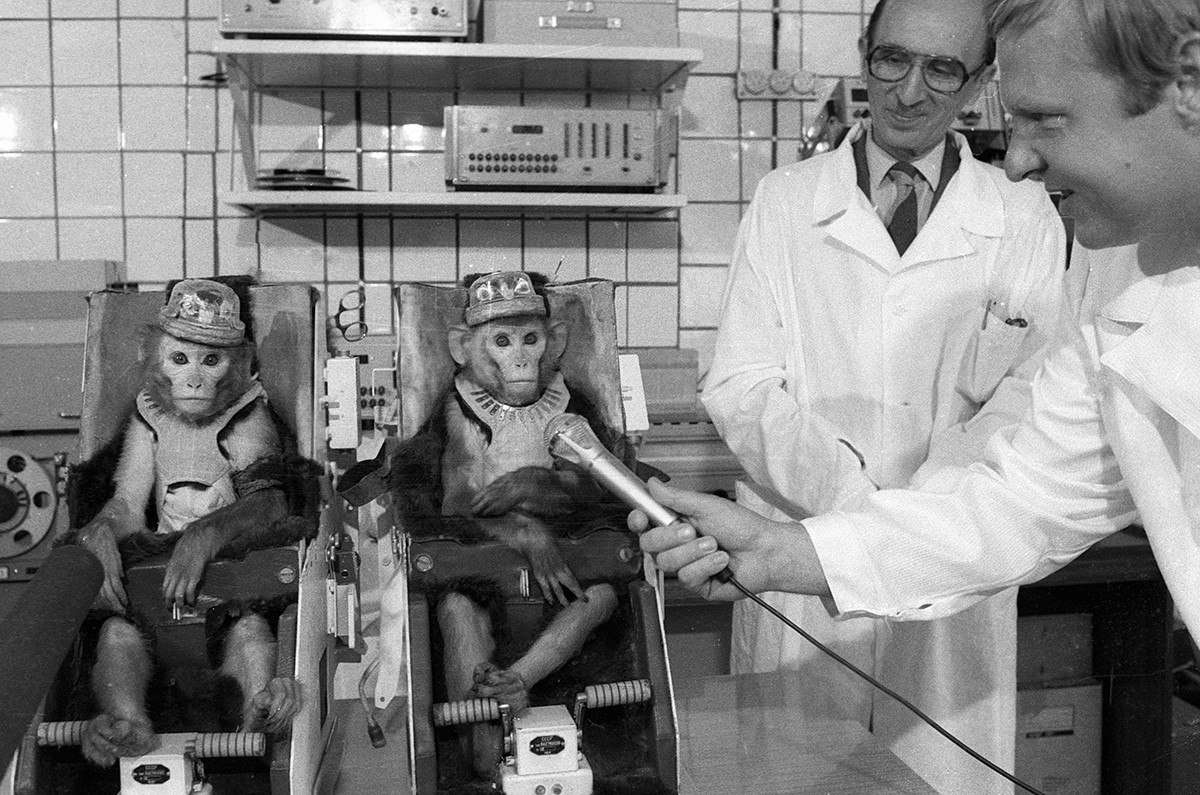 The mission was prepared in terrible haste. In October of that year, Nikita Khrushchev, General Secretary of the Communist Party, ordered that a dog had to be put into Earth’s orbit by Nov. 7, to coincide with the anniversary of the October Revolution. But as yet there was no mechanism for returning the animal safely. Laika was therefore doomed, but no one should know about it. It was thought that Laika would die about a week after the flight. “Unfortunately, she died much earlier,” recalls Gazenko.

Due to a thermal conductivity calculation error, Laika suffocated only a few hours after launch, a fact revealed only in 2002. Back in the 1950s, the Soviet press published reports about her health for seven days, during which time Laika was officially “alive.” After that, the USSR announced that, having gained invaluable knowledge from the experiment, it had allegedly euthanized her, which provoked a flurry of criticism from the West.

Later, commenting on Laika's death, Gazenko said that “working with animals was heart-breaking. We treated them like babies who can't talk. The more time passes, the more I regret it. We shouldn’t have done it. We didn’t learn enough on this mission to justify [her] death.”

Years later, in the 1980s and 90s, the USSR and then Russia did eventually try their luck with monkeys. Twelve were flown into space as part of the Bion program, but the last of them, nicknamed Multik, died following a difficult landing, after which the program was cancelled.