5 BEST Russian helicopters of all time 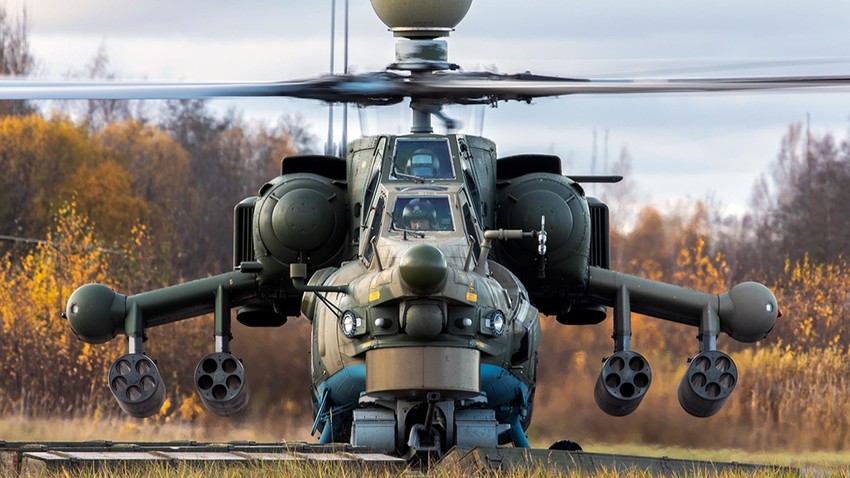 The Mi-28 helicopter is ready for takeoff.

MOD Russia/Global Look Press
While most of these machines are designed to be lethal, others are used in humanitarian and search and rescue operations. 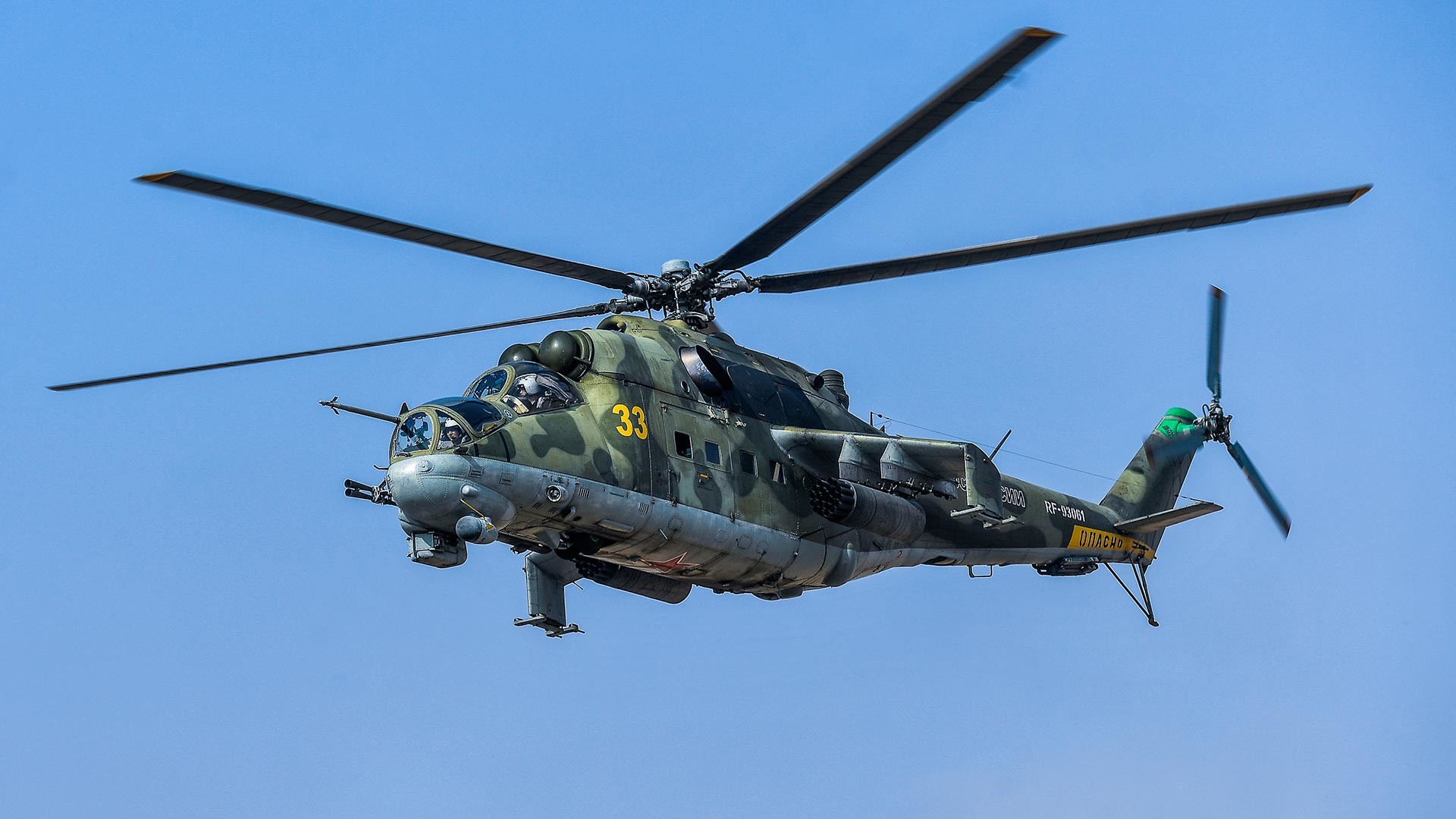 The prototype of this legendary helicopter appeared in 1971. Curiously, Soviet inventors envisioned this machine as a hybrid between a helicopter and an infantry vehicle. In addition to armor protection and weapons on board, the Mi-24 had also a space for delivering infantry to the battlefield — up to eight soldiers — and could support the landing force with fire.

Yet, in reality, the infantry landing operations were rare and the helicopter was more often used for attacking enemy forces. It is known as ‘Hind’ in NATO countries and was also unofficially nicknamed ‘Crocodile’ for its visual resemblance to the reptile.

Throughout the years, the helicopter was used in plenty of military conflicts around the world and also became one of the most widely recognizable symbols of the Soviet war in Afghanistan. 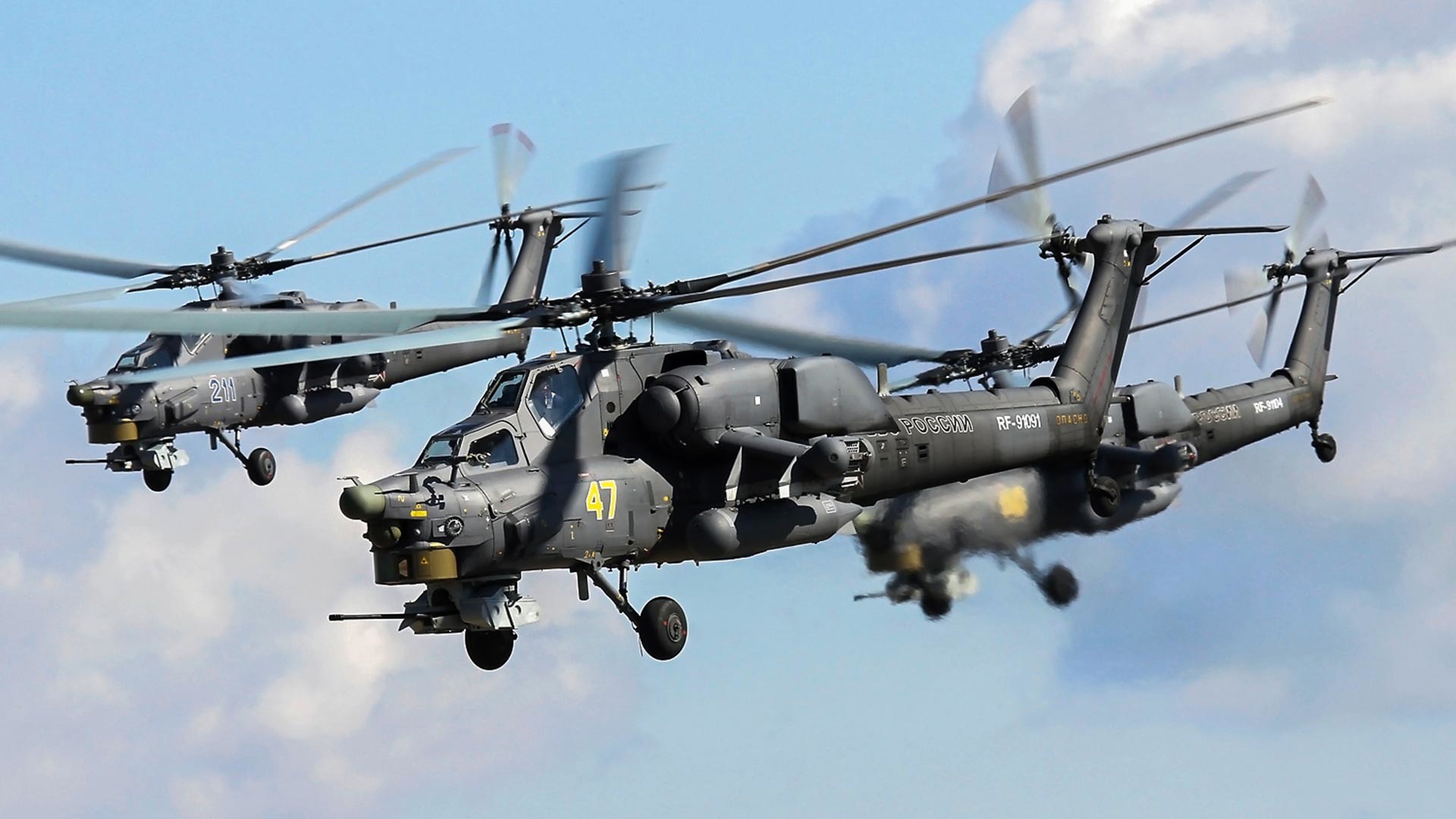 The first machine of this kind appeared in 1987. Since then, a few modernized versions have also appeared on the market. The Mi-28 is an anti-armor attack helicopter that operates on a day-night, all-weather basis, hence the nickname ‘Night Hunter’. Unlike the Mi-24, it has no space for carrying infantry and it can only accommodate a pilot and a gunner.

The helicopter can carry missiles and rockets and is equipped with an automatic autocannon that has a fire rate between 200 and 800 rounds per minute.

The helicopter has been exported to such countries as Kenya, Algeria, India, Iraq and Venezuela. 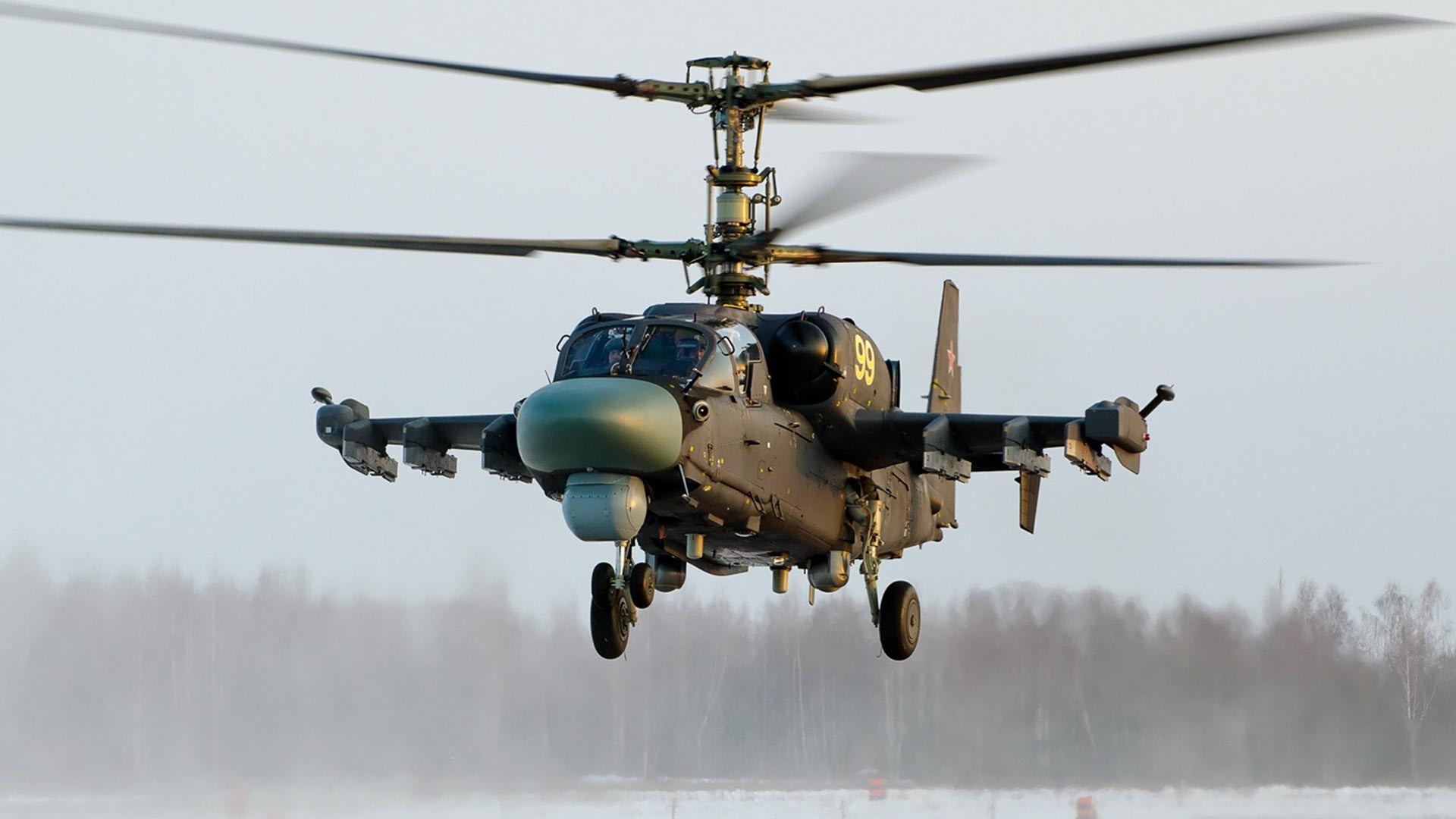 Serial Ka-52 at Torzhok Air Base

In the 1980s, Soviet engineers at the Kamov design bureau created a new single-seat helicopter named ‘Ka-50’, also known as ‘Black Sark’. It was revolutionary in terms of maneuvering, but it was also hard to operate for a single pilot.

The problem was solved when Russian engineers developed a modified version of this helicopter — the Ka-52 — which accommodated two pilots. Series production began in 2008. Nicknamed ‘Alligator’, the Ka-52 is approved for both day and night flights, as well as in adverse weather conditions. The helicopter is equipped with the same autocannon as the ‘Night Hunter’. 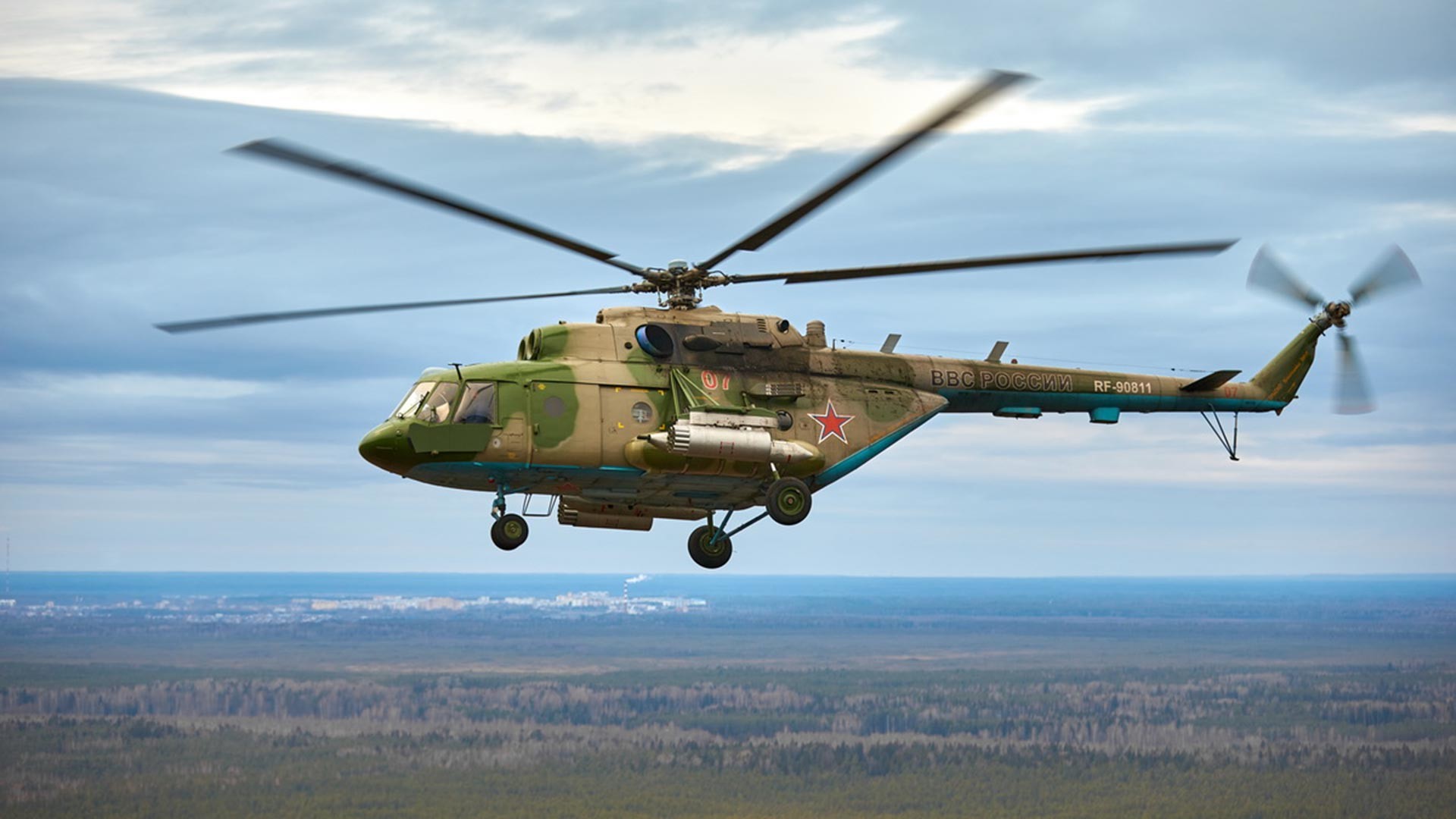 This twin-turbine helicopter is bigger than the previous helicopters on this list. The Mi-8 is a transport helicopter, but it is used for both civil and combat operations: as an airborne command post, armed gunship and also reconnaissance flying vehicle.

The Mi-8 has withstood the test of time like no other helicopter: its serial production began in 1967 and it is still produced today, making it the world’s most-produced helicopter in history.

Since Mi-8 is so widely used in Russia and abroad, countless modifications exist, each designed for specific civil or military purposes: search and rescue operations, laying anti-personnel mines, transporting people and cargo, etc. 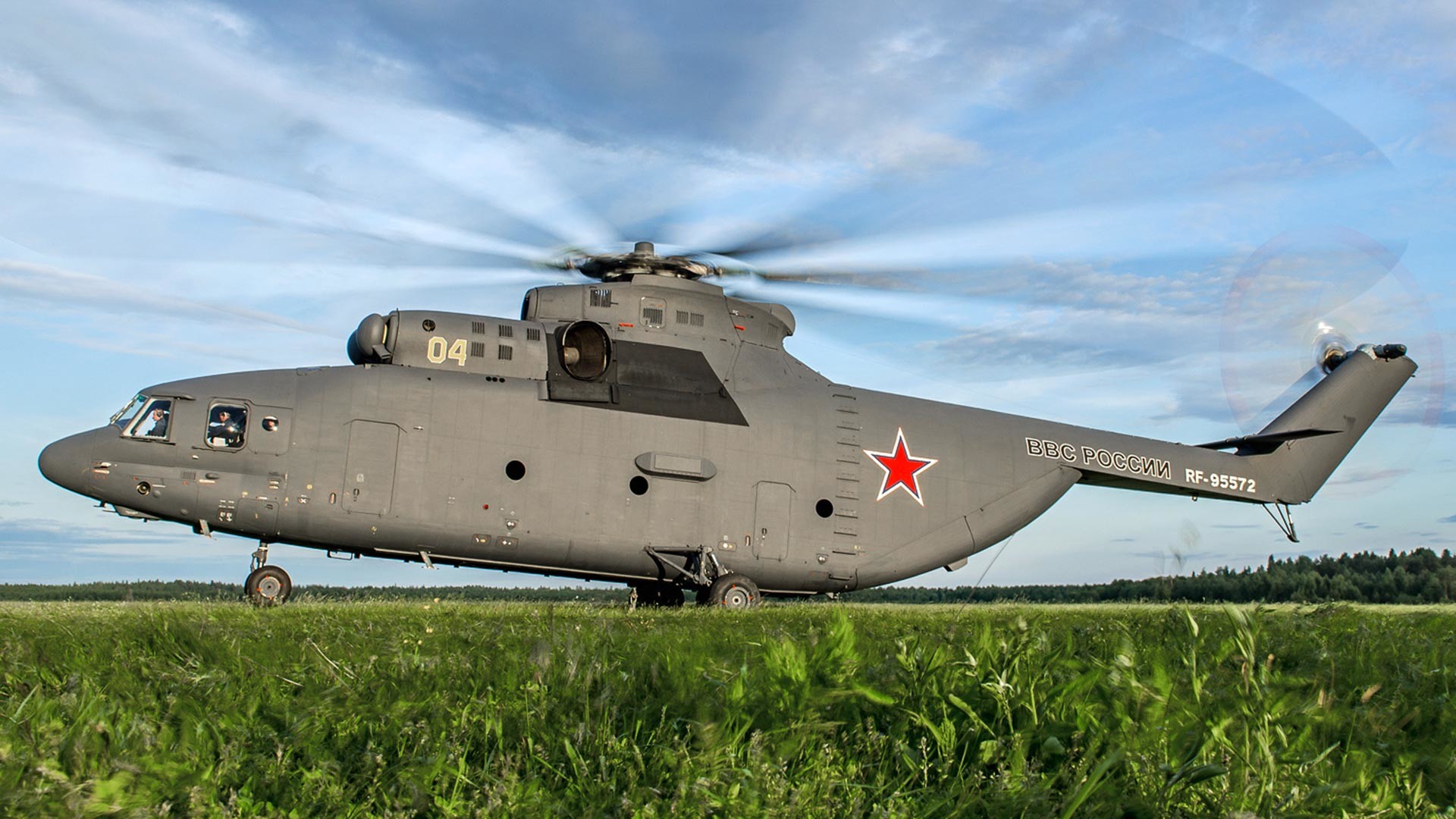 The Mi-26 is the largest helicopter ever to have gone into serial production. Debuting in 1980, this multi-purpose helicopter is still produced today and, just like the Mi-8, is used both for civil and military operations.

The primary purpose of this helicopter is transporting heavy cargo. Upon its release, this giant flying machine replaced the Mi-6, which then was the world’s largest helicopter. Compared to its predecessor, the new Mi-26 has twice the cabin space and payload amounting up to 20 tons (44,000 lb).

One of the most notable uses of this helicopter was during the Chernobyl disaster, when it was hastily adjusted for the containment efforts and precision drops of insulating material to cover the damaged reactor of the plant.

Click here for the 5 best Russian cars of all time.