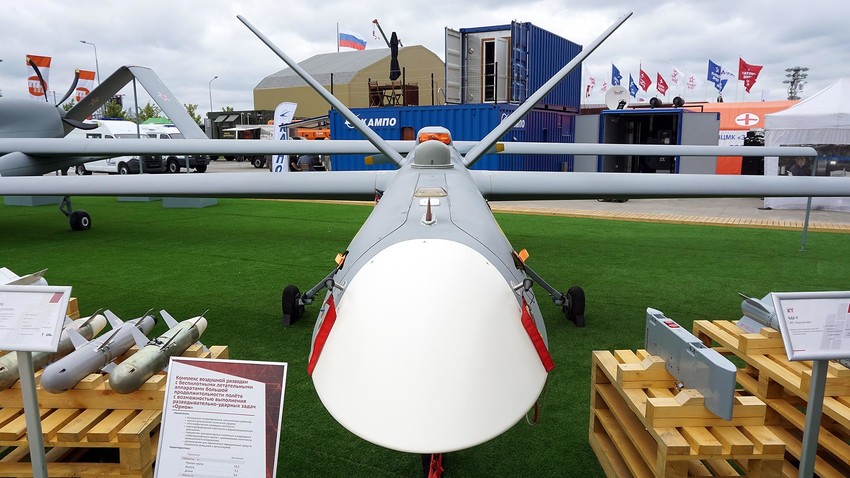 Vitaly V. Kuzmin/vitalykuzmin.net
The drone was created with next gen weapon systems to effectively defend from enemies around the globe. Yet, it also has to be combat capable to be considered equal to foreign analogues.

The ‘Orion’ belongs to the class of medium-altitude long flight drones (NATO’s annotation for this drone class is ‘MALE’ – Medium Altitude Long Endurance). This device has a fairly high flight performance and a solid load capacity, which makes it a good platform for missile and bomb weapons. At the moment, the first batch of three ‘Orion’ drones has joined the military and more of those will soon join the ranks as well.

A set of radio-electronic systems for various purposes has also been installed on the drone. The most noticeable component is the optoelectronic station fairing under the bottom. With its help, the UAV can conduct reconnaissance, as well as search for targets for the use of weapons and monitor the results of the strike. 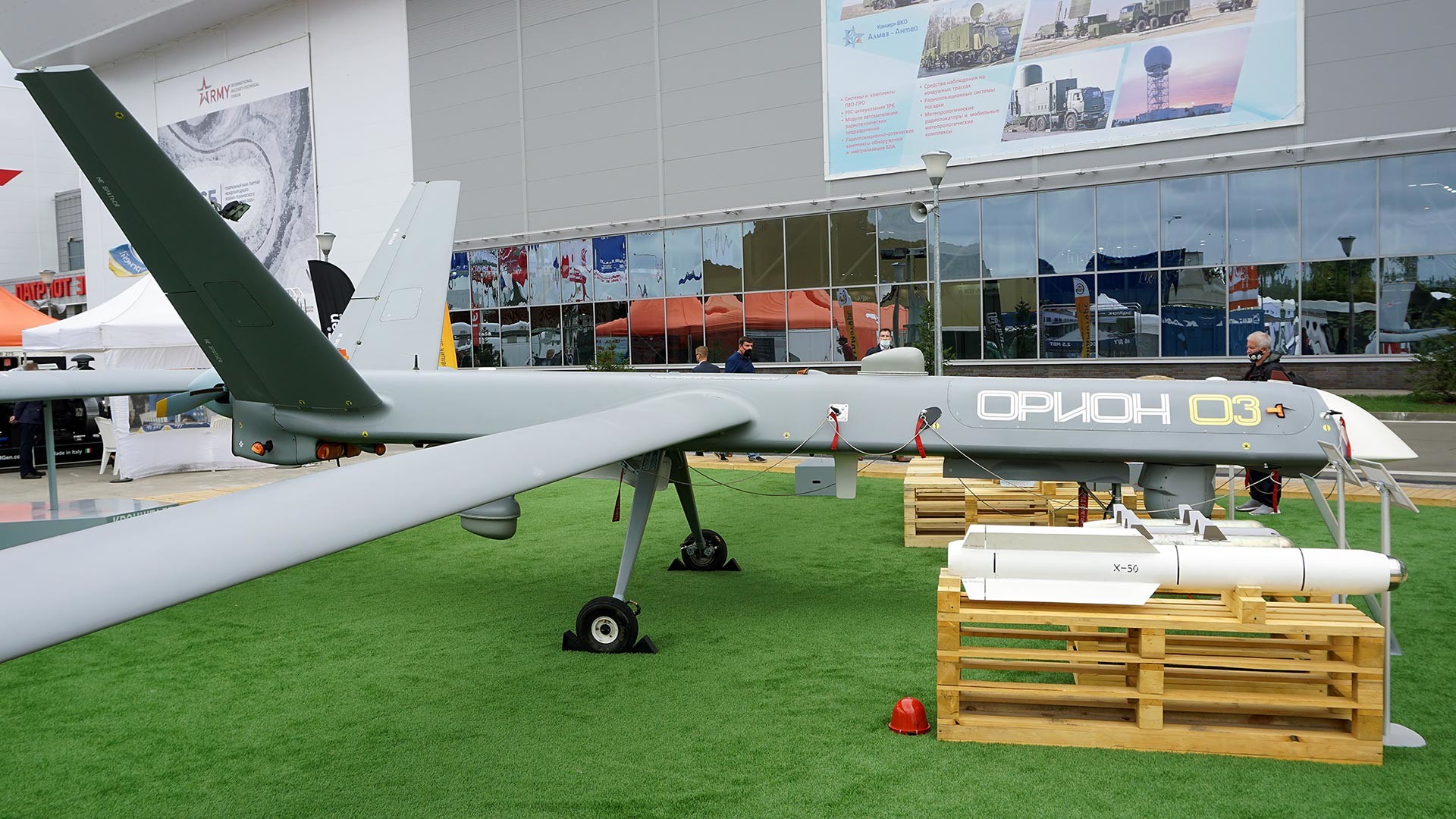 For the use of the UAV as a weapon carrier, engineers have installed removable pylons. One such device is mounted under the wing and another is placed under the fuselage.

Weaponry and comparison with foreign rivals

It has long been known that the ‘Orion’ UAV has been designed to carry and use guided missiles and bombs of several types. A small-caliber ammunition was also specially developed for it, corresponding to the limited payload capacity of the device. Models of such units were openly demonstrated a few months ago.

“For the ‘Orion’ - and in the future for other medium or heavy attack UAVs - a whole range of guided aerial bombs were created. They are made in calibers of 20 and 50 kg. The main one is the UPAB-50 planning aerial bomb with a warhead from the ‘Grad’ rocket system. A similar charge is carried by the KAB-50 unit, which can be equipped with an infrared, video and laser homing head. There is [also] a simplified FAB-50 bomb,” reveals Vadim Kozulin, a professor at the Academy of Military science. 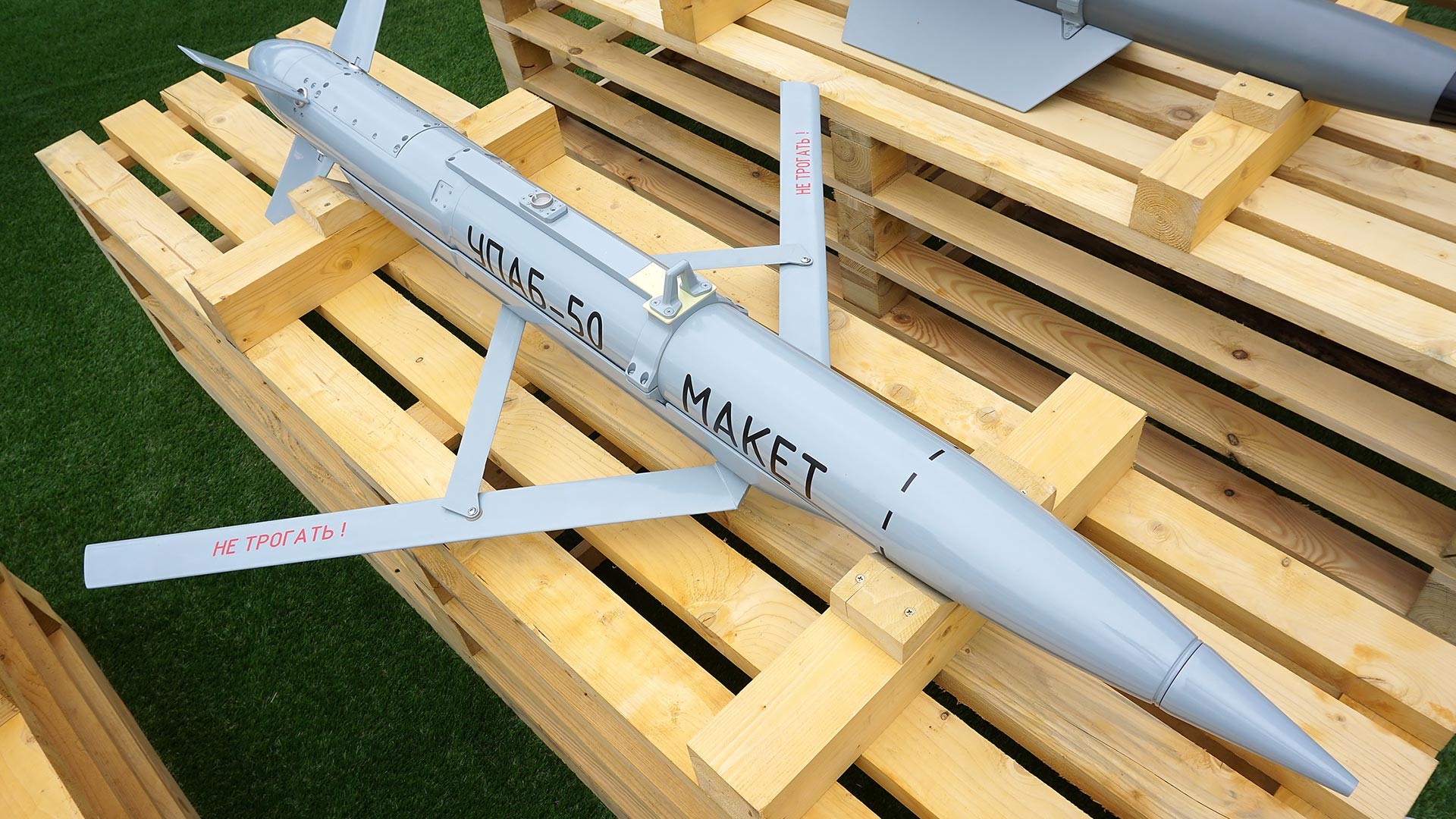 The smallest in the nomenclature are the KAB-20 bombs.  They weigh about 21 kg and carry 7 kg of explosives.

“In the nearest future Orion will receive these bombs with satellite and laser guidance,” the expert mentions.

Russian engineers created a X-50 guided missile specifically for this drone. This weapon is 1.8 meters long with a body with a diameter of 180 mm. The mass of the rocket is 50 kg, of which up to 20 kg falls on the warhead of the required type.

“With the help of standard optical means, the ‘Orion’ UAV is able to observe the terrain and search for targets. Then, using the existing types of bombs and missiles, the drone will be able to strike at ground targets within a radius of at least several kilometers,” the expert adds.

Weapons with warheads weighing from 7 to 20 kg are capable of effectively hitting manpower, lightly armored vehicles and undefended structures.

“To be honest, Russia’s chasing the U.S. in drone manufacturing. These machines were widely used in Iraq and Afghanistan in NATO’s operations and they have much more battle experience, as well as modifications and variations for all types of operations. We only tested our ‘Orion’ back in 2018 in Syria, but only used it as a reconnaissance unit and not as a seek-and-destroy [weapon]. So we have a lot of work to do in the future to put our machine in one line with foreign X-47B ‘Pegasus’ and MQ-9 ‘Reapers’,” believes the expert.